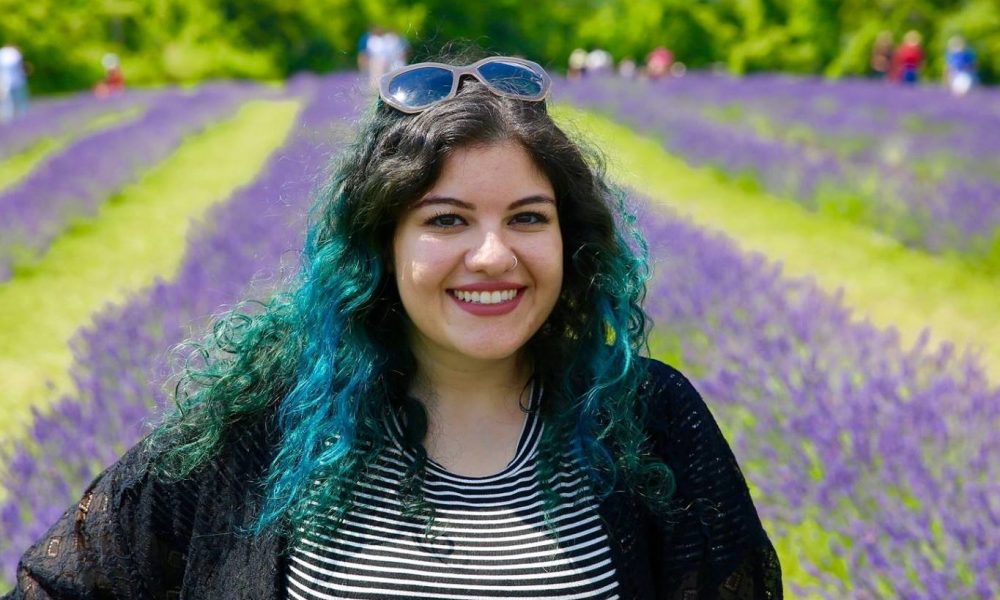 Today we’d like to introduce you to Mira Hamour.

Mira, can you briefly walk us through your story – how you started and how you got to where you are today.
I’m a Syrian-Canadian Documentary Filmmaker who most recently Directed and Produced the award-winning documentary short Syria’s Tent Cities.

I’ve always had a strong interest in social issues. Realizing the power of film to motivate people to take action and make a positive change, my growing passion for social issues led me to choose to go on to study Documentary Filmmaking.

While working on my MFA in Documentary Filmmaking, I created films that focused on issues that I felt needed to be heard and further explored. I wanted my films to not only educate the audience on the issue at hand but to also show them clear ways in which they can help and make a difference. One of the films I’m working on is about the PCOS Disorder in women and how the many side effects it causes impact those affected by it.

My current project and debut film, Syria’s Tent Cities, was shot in Jordan, Lebanon and Canada and explores the Syrian Refugee Crisis from both a local and global perspective by examining the lives of Syrian refugees in Middle Eastern refugee camps while also answering the question of what happens next, once they’re resettled in North America. Throughout the film, the refugees work to improve their situation through the efforts of two individuals who have dedicated their lives to making education and inclusivity a right for all Syrian children: Nowell Sukkar, founder of Nowell’s Mission and working in Jordan and Lebanon, and Mazen El-Baba, founder of H.appi Camp working from Ontario, Canada.

Hundreds of thousands of Syrian refugee children don’t have access to a basic education. During a visit to my home city of Toronto in August of 2016, I spoke to newly resettled Syrians who noticed a world of difference in their children who had just attended the first ever H.appi camp, a free summer camp experience exclusively for newcomer refugee children. H.appi aimed to help these children integrate into Canadian society, improve their linguistic skills and aid them in overcoming the trauma that they had experienced before arriving in Canada. When I actually made the film a year later, I realized that whether they’re living illegally in neighboring countries or permanently resettled in Canada, many of the refugees were united in one thing: their goal to achieve a better life through a good education.

In addition to filmmaking, I’m very passionate about travel and hope to be able to see the world through my work. I’ve been to 22 countries so far and it never ceases to amaze me how many similarities we all have on a basic human level, regardless of differing social and cultural norms.

Has it been a smooth road?
It definitely hasn’t. But, as cliché as this might sound, every struggle has been worth it and has made me appreciate where I am today so much more.

As an emerging artist, you’re definitely going to have times where you doubt yourself and your abilities, sometimes even whether you were meant to be in this field at all. You’re going to have friends in ‘safe’ jobs, with a steady paycheque and very little risk involved. And sometimes it’s going to scare you. Being a documentary filmmaker is hard, it’s challenging, there’s a lot of discipline, work and time management that goes into it. You have to be able to believe whole-heartedly in yourself and your project and the message that you’re trying to put out there. I’ve been so fortunate to have incredibly supportive parents, family, friends, and teachers in my life who have definitely played a big role in me getting to this point today. But to make it in this field, you have to truly believe in your work and keep pushing to make the story you’re working on heard; past every festival rejection you receive, every professional failure that comes up along the way, and every one of the many challenges you’re going to face.

Specifically, working on Syria’s Tent Cities was especially challenging. One of the things about being a low-budget student and having to operate as what was often a one or two-person crew is that you learn to wear many, many hats on the job. As with most of my other projects, I was in charge of concepting, directing, producing, shooting, recording sound and editing Syria’s Tent Cities. As someone who’s doing the job of five people, I needed to be able to handle my emotions, even when faced with a seven-year-old girl whose leg has been amputated during the war staring longingly from her wheelchair as her twin sister and other siblings run around their one-bedroom apartment. Even when a two-year-old little boy being raised by a single father is so deprived of the love of a mother he lost while the family were fleeing the country that he curls up in your lap while you’re shooting an interview with his father and clings to you, refusing to let go when you have to leave later. I had to keep my composure on location; if I was an emotional wreck the film wouldn’t get made and no one would hear their story. There were many, many tears when I got home. But I’d have to get up the next day and do it all again, pretending that my heart wasn’t breaking every time I met another child who just didn’t understand why they had to lose family members and run from what was once a safe and happy home.

We’d love to hear more about your business.
I specialize in documentaries, mostly about social issues. I’m proud of every project I’ve worked on because I’ve truly believed in it and the need for it to be seen and understood by a larger audience who can help make a difference.

But I’m especially proud of Syria’s Tent Cities. As someone who identifies as both Syrian and Canadian, this story really hit close to home. It’s something I wanted to do for so long that every (increasingly difficult) challenge that I was faced with while making this film was a blessing I was grateful for because it meant that I was finally actually making the film and telling the story of Syrian refugees. Unfortunately, I feel like we’ve come to see them as statistics, a single mass of people. But by focusing on individual families (not that different to ours) and sharing their stories, I wanted to remind people that these are humans, parents, siblings, friends…just like them. They’re not a single, mass statistic.

The Syria we see on the news today is painfully different from the one I knew growing up, it’s hard to come to terms with just how bad things have gotten in a relatively short amount of time. As with many other global crises, after a while, people begin to grow tired of it because, even if they want to help, they don’t know how to. It seems too complicated, too difficult, and they feel helpless. And that’s why I wanted my film to focus on the specific issue of education and how the lack of it is preventing millions of children from growing up to be self-sufficient, contributing members of society. It’s killing their childhood, their ability to dream, aspire and achieve. And then we see Nowell and Mazen; they’re not millionaires, they’re not people who have absolutely nothing else going on in their personal lives. Mazen is a full-time medical student and Nowell is a mother of two who has to tend to her own family’s wellbeing. Yet they still make the time to help, they’re dedicated. And although I don’t expect every person who watches the film to start a non-profit like theirs, they show us the small ways in which we can all help truly make a difference in these children’s lives. Simple things and contributions that actually end up having a noticeable and positive impact in the long run. It was incredibly inspiring to work with them, and I really hope that, when they watch the film, the audience is inspired in the same way I was.

Apart from my own projects, I currently freelance, primarily in Documentary Filmmaking. Most of my jobs are in pre-production and/or production. I love researching a great topic extensively, reaching out to people, booking and conducting interviews, being on location shooting vérité and seeing my subject’s world through the camera’s lens. When people let you into their lives that way, it’s a really great, fulfilling feeling, there’s a certain mutual trust and understanding there. The amazing people that documentary filmmaking brings into your life and the relationships you develop with the people you film are truly incredible and constantly remind me of why I got into this field and how fortunate I am to call this my job. Making Syria’s Tent Cities was such a humbling and eye-opening experience; I saw first-hand the difference that dedication and love, even coming from a single individual, can make in the lives of those facing a global crisis.

Is our city a good place to do what you do?
As someone who works in non-fiction, I think that there’s this huge misconception that L.A. is primarily for people working in narrative or fiction films and projects. The way my grad school program was designed, the first year took place at the New York campus and the second was at the Los Angeles Campus. While it’s true that New York has a thriving documentary field, I don’t think L.A. has any less opportunity for those involved in documentary filmmaking.

In fact, I pre-produced Syria’s Tent Cities during my second year of grad school in LA and was surrounded by an amazing network of knowledgeable, supportive professionals who played such a big role in the film’s inception. Through a collaboration with my school, I was also involved in KCETLink’s Where Cultures Collide docu-series in Southern California, which explored the intersection of Southern California’s diversity.

Fiction or non-fiction, I think that L.A. is such a great environment for an artist or filmmaker to be and work in. There’s plenty of opportunity, inspiration, a great balance of city and nature, and an incredible network of artists to collaborate and work with. You also definitely can’t beat the weather! 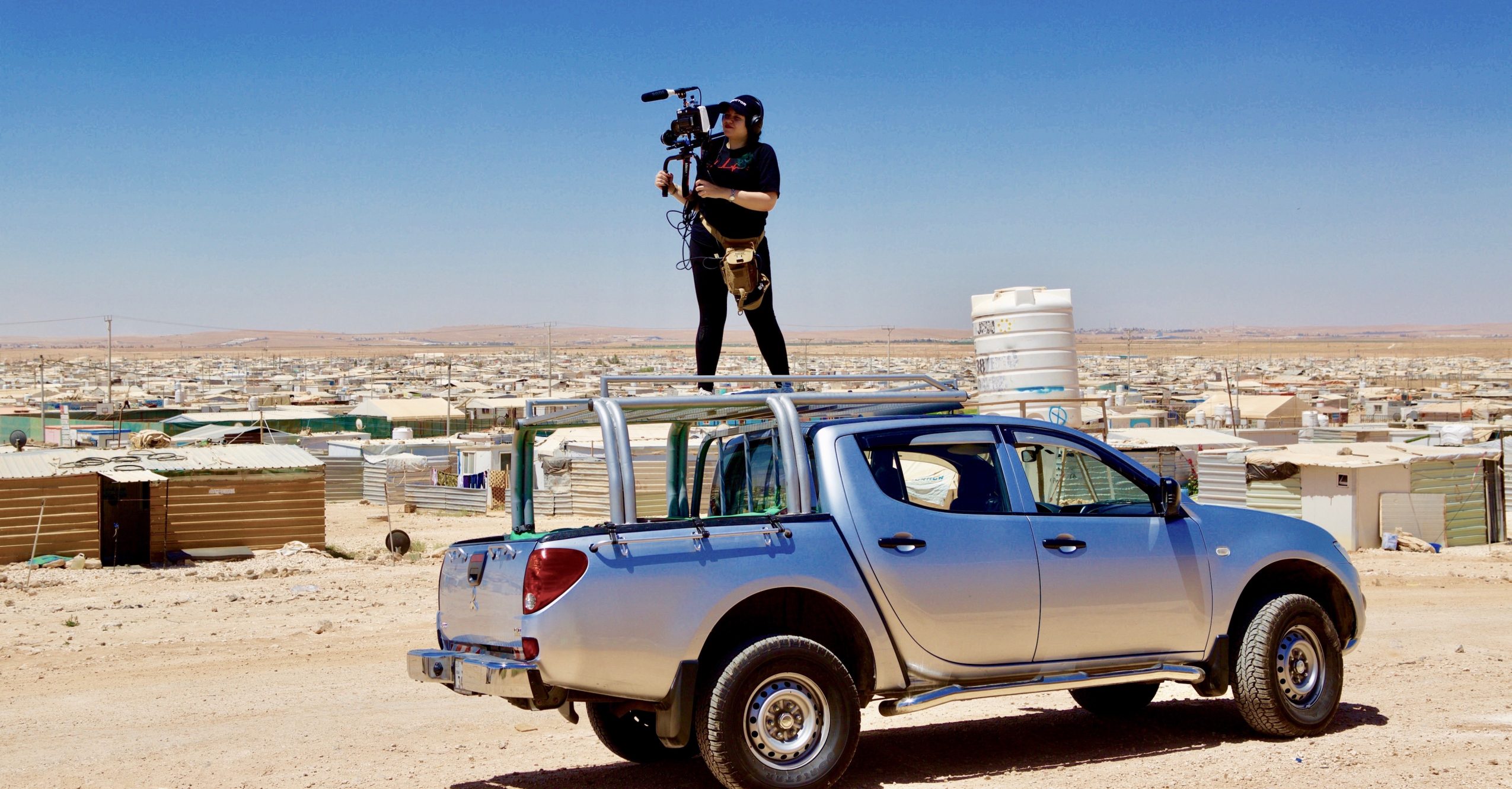 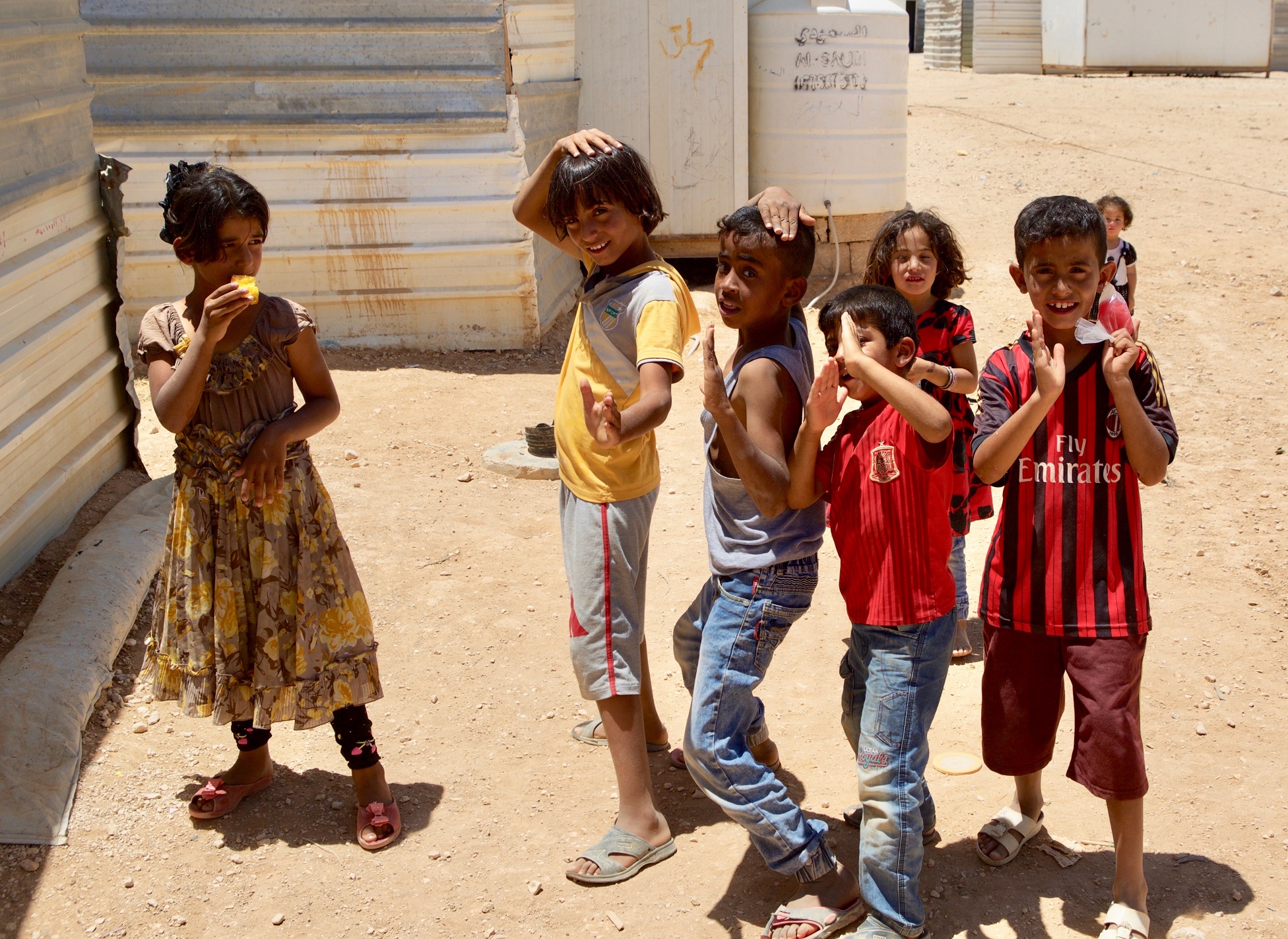 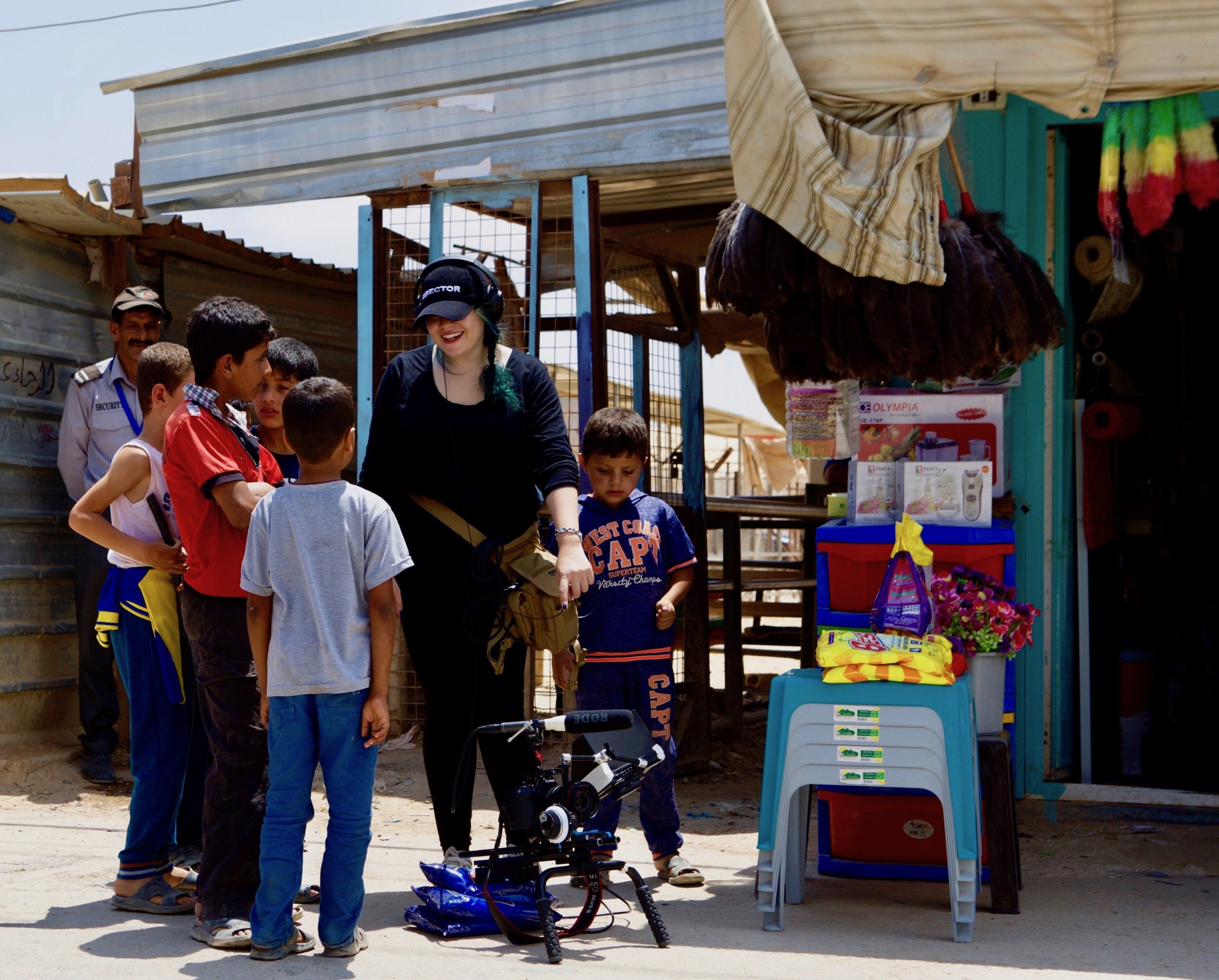 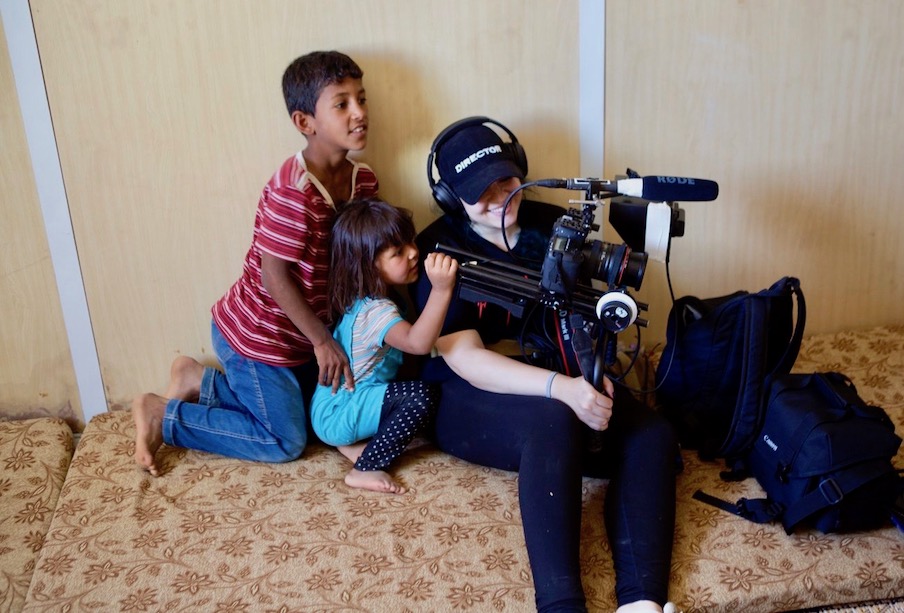 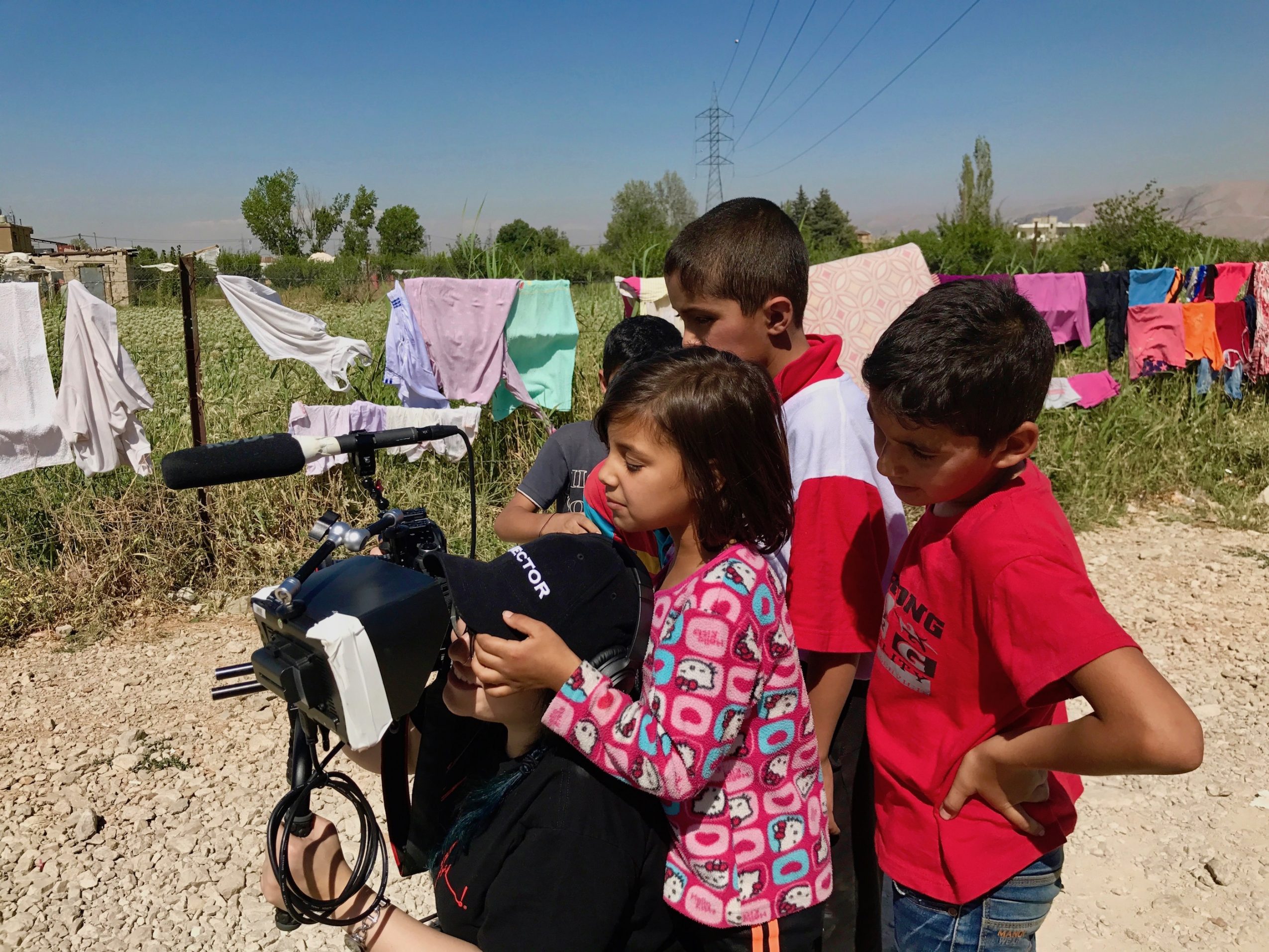 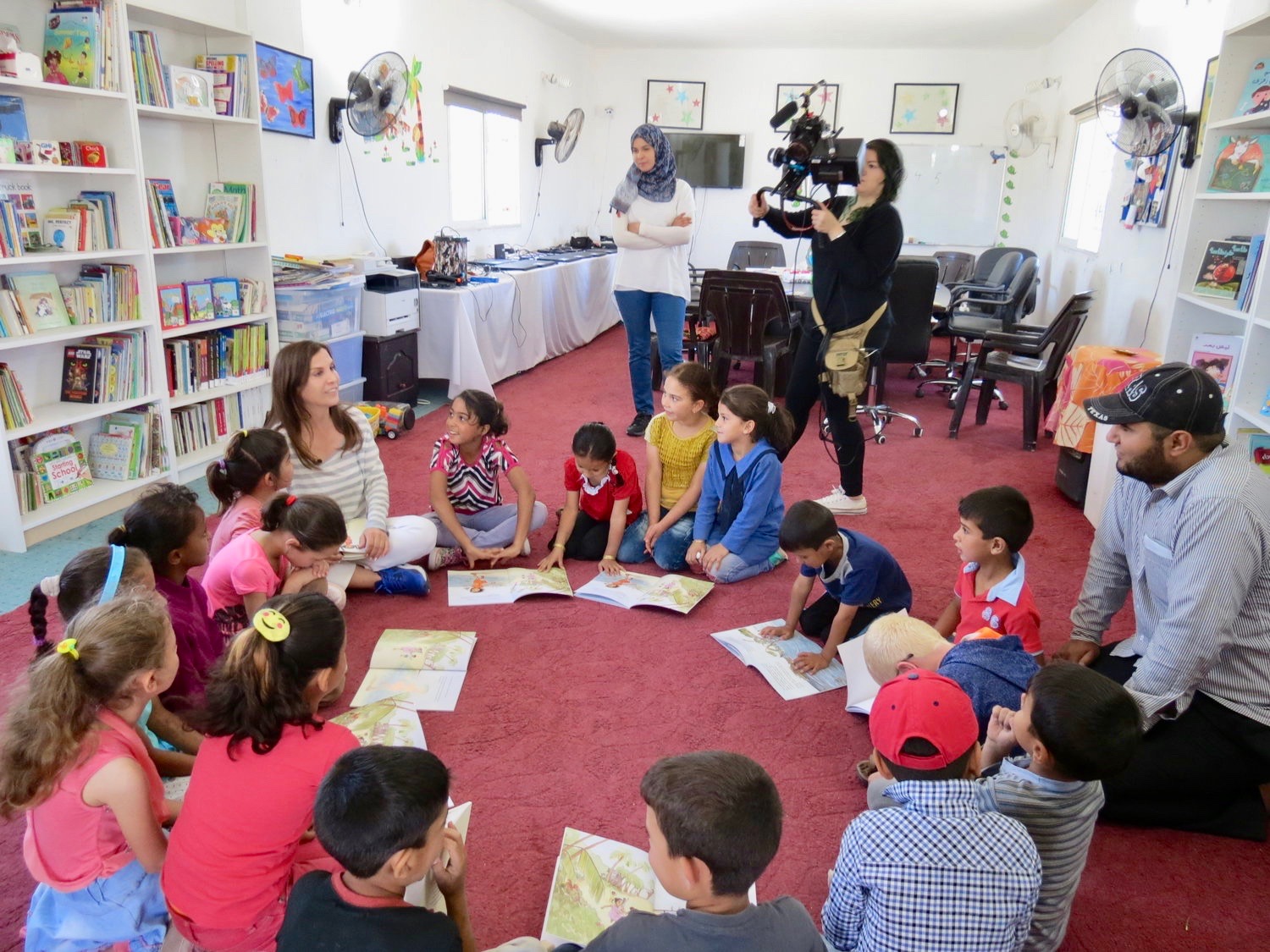 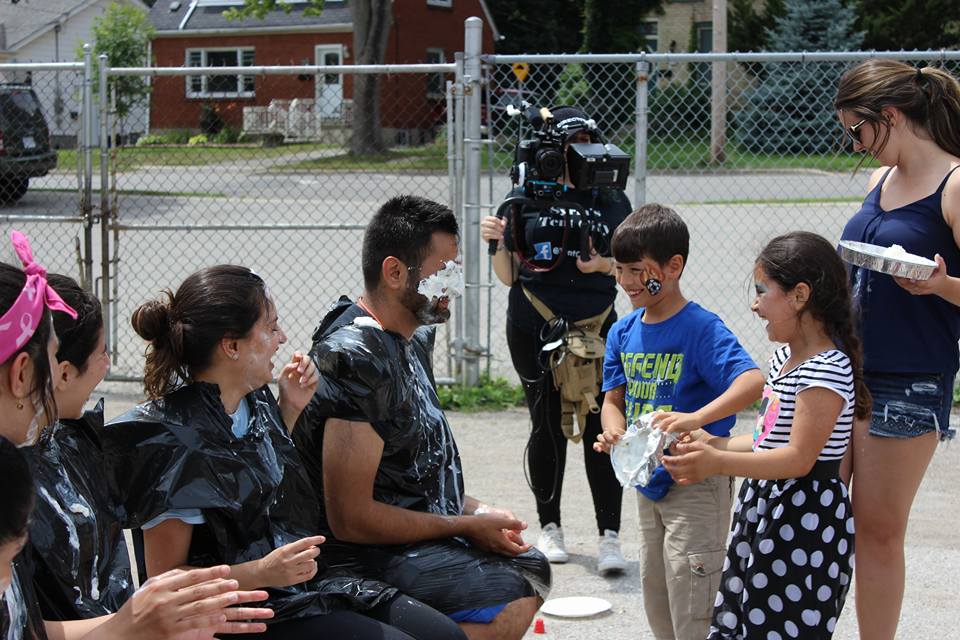 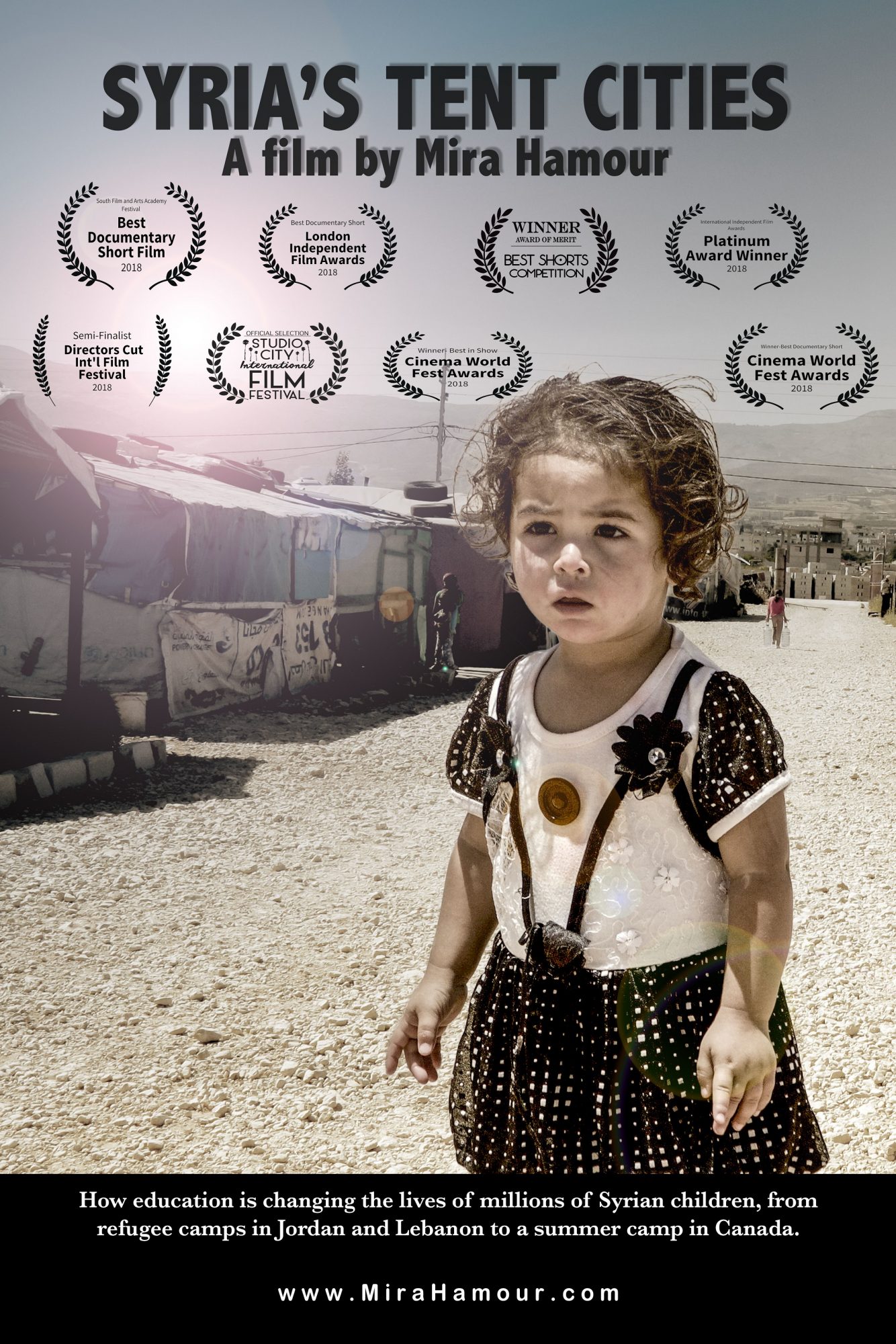 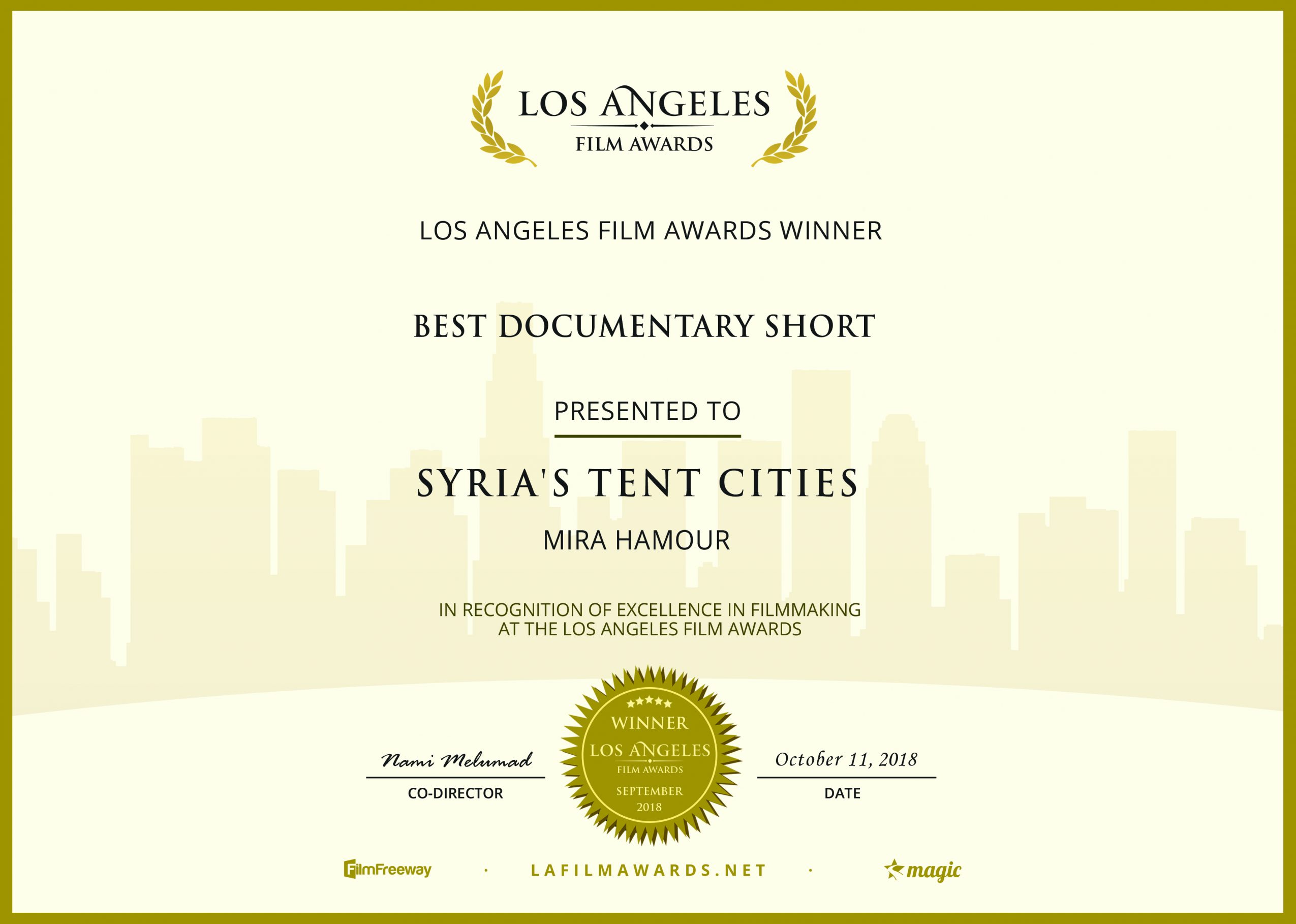 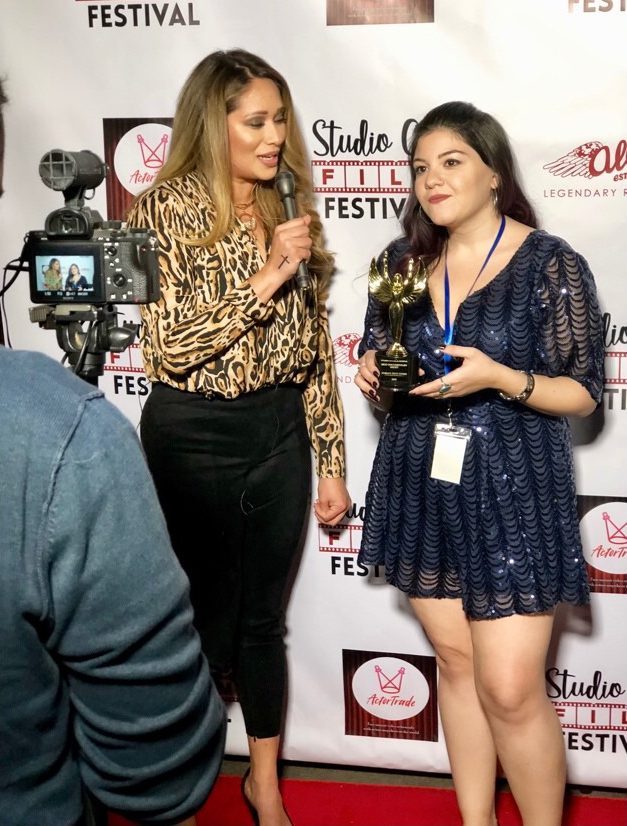 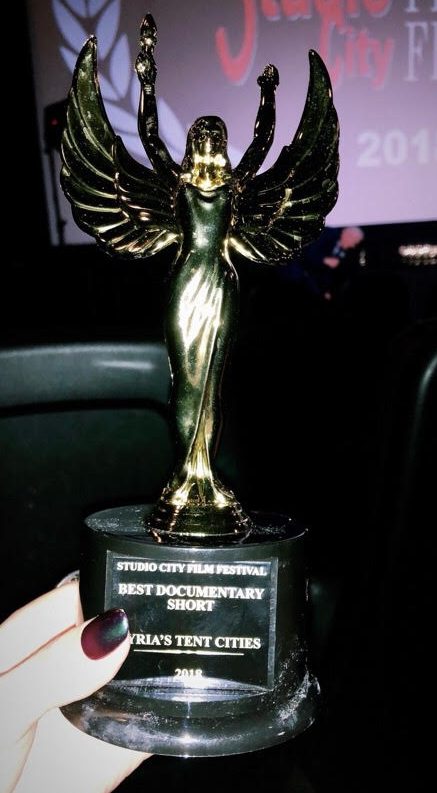