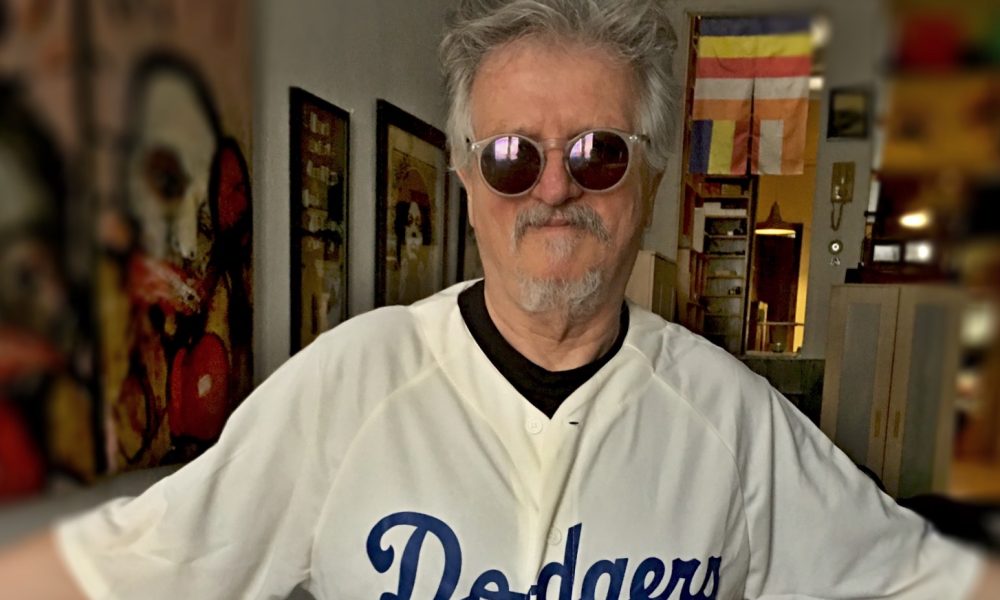 Today we’d like to introduce you to Jonathan Jerald.

Jonathan, can you briefly walk us through your story – how you started and how you got to where you are today.
I moved to a loft in the Arts District in 1995. There was a great sense of community in those days, even though that corner of downtown, tucked between Little Tokyo and the LA River, was a desolate wasteland of empty warehouses and abandoned factories– a very far cry from the cultural and culinary destination it is today. Even though the area looked desolate, there was a thriving scene in adapted spaces in dozens of buildings. There was Al’s Bar on the ground floor of the American Hotel just off Traction, an artists’ hangout and the left coast version of CBGB — a must stop for emerging punk rock bands visiting LA. Red Hot Chili Peppers got their start there, as did Beck and others. On Center at Santa Fe the Citizens Warehouse (also known as the Pickleworks) was one of the first artists’ loft buildings in the area — as well as the location of the Drive-By Gallery, a creation of the artist Carleton Davis in the late 70s and one of the first downtown “anti-galleries” opened by artists in rebellion against the gallery establishment. ArtShare LA on Hewitt at 4th Pl., founded in 1997, is the longest-running venue for local artists — and still going strong. But the true epicenter for the underground arts scene in the 90s was Bedlam, a fantastic two-story structure on 6th between Alameda and Mateo presided over by Jim Fittipaldi, who was part PT Barnum and part Gertrude Stein. It was a glorious, crowded, gallery/drawing workshop/concert venue where half naked models hung out at the speakeasy bar with writers, celebrities and musicians. It was the closest thing to a true salon I had ever encountered and it instantly became my hangout. Even at the turn of the century, however, we knew changes were inevitable and that sooner or later the low rents and vast adapted studio spaces would disappear as gentrification finally reached us, as it eventually did with a vengeance by 2010 or so. As the end drew near for Bedlam and Al’s Bar, Lucy Jensen, Tim Keating and I founded Los Angeles Downtown Arts District Space (LADADSpace), a non-profit we hoped would encourage and support the fragile local subculture which produced such amazing talents as Paul McCarthy, George Herms, Forrest Whittaker, Beck, Meshell Ndegeocello (to name just a few!) and was fertile ground for local theater groups such as The Zoo District, Padua Playwrights and Cornerstone Theater.

Great, so let’s dig a little deeper into the story – has it been an easy path overall and if not, what were the challenges you’ve had to overcome?
We started with little more than enthusiasm and the contributions of production companies filming in the area. As that income grew, we expanded our activities and opened a small demonstration gallery on E. Third near Traction that thrived for a brief three-year period and became a gathering place for the dwindling crowd of local artists, the developers of One Santa Fe offered us a ground floor space for $1000 a year to mitigate the impact that enormous new structure would have on the neighborhood. We partnered with Padua Playwrights and planned to develop that space into an Arts District Center for the Arts. However, the property owners wanted an additional $30,000 a year in common area fees — and although the initial owners assured us we could negotiate that away, when the property was flipped the new owners insisted we pay up. We were also facing build-out costs in excess of $750,000 – and then we were hit with a lawsuit by the Los Angeles River Artists and Business Association, another Arts District Community non-profit from which we had withdrawn our support when its priorities shifted from the arts to zoning and infrastructure issues that had more to do with property values than preserving the fading local culture. LARABA demanded half our filming revenues. The lawsuit made seeking contributions from local developers and property owners extremely challenging. Our board finally to throw in the towel and we withdrew from the lease at One Santa Fe.

Please tell us about Los Angeles Downtown Arts District Space.
The primary goal we set for ourselves in 2004 was to do what we could to keep artists in the arts district and preserve the local culture in the face of skyrocketing rents and rapid gentrification. We created installations, pop-up gallery events and concerts in warehouses and lofts. One such event was a competition for architecture students to see what ideas they could suggest to do something with the abandoned quarter-mile long freight depot that stretched along Santa Fe between Third and 4th. The competition brought the structure to the attention of the faculty of the Southern California Institute of Architecture. Within a few years they adapted the building to its new campus and SCI-Arc became the anchor arts institution in the Arts District. However, as rents went up artists started moving away. We struggled with city officials and developers to include affordable housing (specifically for artists) in the new structures but we have only been marginally successful. Over the past 15 years the artist’s population declined by at least 75%.

In the 13 years since it was created, Los Angeles Downtown Arts District Space has supported numerous cultural activities, including ground-breaking theater — such as the world premiere of Murray Mednick’s Clown Show for Bruno; workshops and experimental productions by Padua Playwrights and art installations at various venues, For three years, LADADSpace operated the District Gallery on E. Third near Traction and sponsored a series of annual Arts District Winterfests: ten-day annual events that include open exhibitions of work by area artists, live music and theater. LADADSpace has also given grants to artists and arts organizations in the community and has emerged as an activist organization that works with city and other cultural entities to create and support events that help make Los Angeles a cultural destination. In 2015, LADADSpace facilitated the placing of a massive Lebbeus Woods sculpture on the triangular property known as Joel Bloom Square in the heart of the community at the intersection of E. Third and Traction. LADADSpace continues to develop and support cultural events and advocate for affordable housing for artists in the Arts District and throughout downtown.

We depend on contributions from production companies filming in the Arts District and support from corporate sponsors (such as Warner Bros,) and grants from the National Endowment for the Arts, the City of Los Angeles Department of Cultural Affairs and the Los Angeles County Commission for the Arts.

Now that we no longer have to focus on developing the space at One Santa Fe we are free to get back to the basics of encouraging and supporting cultural activities and events. This spring we are facilitating the re-creation of Kent Twitchell’s massive mural portrait of Ed Ruscha that will go up on the side of the American Hotel. We are also hosting a pop-up installation — two years in the making — featuring ground-breaking work by artists (including John Craig Freeman) whose work takes place in virtual and augmented reality. That show will open on Saturday, May 6th and run for at least two weeks. We are also underwriting Padua Playwrights writing workshops — and we have launched an occasional series of open house events at the studios of downtown artists to bring attention to the remarkable wealth of local talent that is all around us.

Do you look back particularly fondly on any memories from childhood?
I was probably a typically surly eleven or twelve-year-old when my parents dragged me to the Baltimore Museum of Art, the crown jewel of which is the Cone Collection, one of the finest collections of Impressionist painting and sculpture anywhere outside of France. I was stunned. It was electrifying. It was like learning a new language and falling in love in the same instant. I have never recovered.