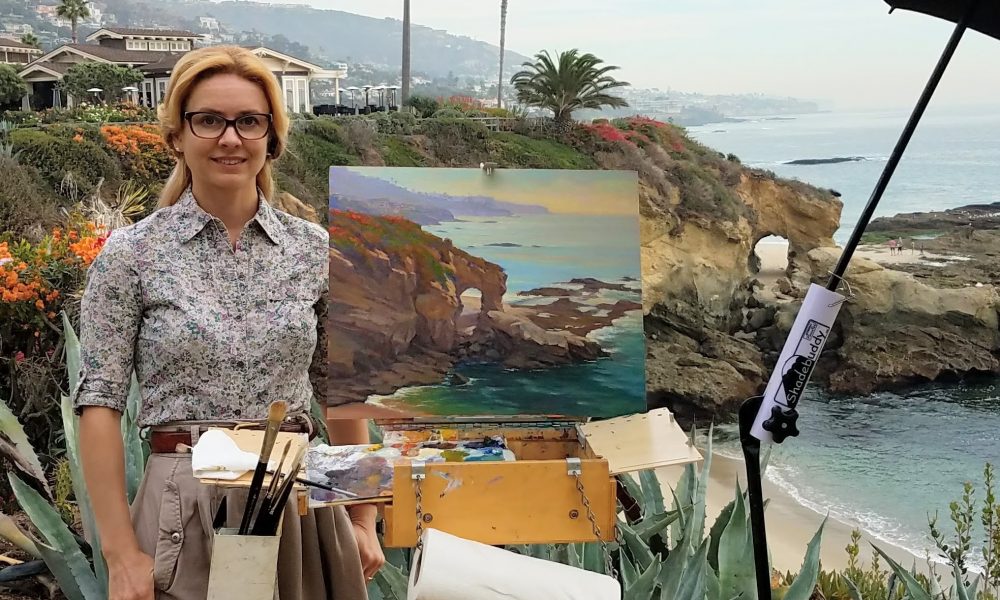 Today we’d like to introduce you to Elena Roche.

Born in Lithuania and raised in Soviet Russia, Elena M. Roché recalls an adverse childhood. Once a withdrawn girl, no one would have predicted that Elena would become a passionate artist, a determined plein air painter, an adoring mother of five home-schooled children, a respected bed and breakfast owner, and least of all, a proud American citizen.
​
As a teenager, Elena preferred quiet hours of embroidering to the activities that engaged her peers. It was clear that she should major in traditional embroidery design, and the only college offering this major was in Moscow. So, in 1991, as the country was in the midst of a regime change with tanks and unrest on the streets of the capital, Elena arrived despite the strife to begin her art studies at Moscow College of Fine Art and Traditional Crafts. She completed her studies in 1997, graduating with a diploma in Fashion and Embroidery Design. Her rigorous art training included traditional academic drawing, painting, composition and graphic design. Among her professors was Mr. Krayushkin and Ms. Sheyena, both well respected old-school artists.
​
As Moscow and Russia were changing during her college years, so was Elena. She went from an impoverished art student who at times was literally starving, to a well-paid manager of a private business. Despite the promising new opportunities around her as Moscow society experimented with capitalism, when an American proposed to Elena and offered her the chance of a better life in the United States, she left Russia for good. Her new home was in the Santa Monica Mountains in the quiet town of Topanga, a suburb of Los Angeles.

Elena Roché spent her first few years in the U. S. developing her own painting style. Like a bird suddenly released from her cage and let free to spread her wings, Elena’s creativity flew off in various directions. She tried out many art supplies, materials and mediums. By contrast to Russia’s stores, Elena’s local art store carried so many art products that her reaction was not too far from Robin Williams’ in the unforgettable coffee scene in the 1984 “Moscow On The Hudson”. She spent many sunny days in her luscious Mediterranean garden enthusiastically painting California’s garden flowers in watercolor en plein air. It is something she would have loved to do back in Russia, but the climate didn’t permit it. In addition to watercolor, she developed her own pastel portrait technique. She drew with colored pencils, charcoal and graphite and produced portrait commissions and architectural portrait commissions in those mediums. Elena designed, sewed, crocheted and knitted clothes for her children and herself, thanks to numerous fabric and craft supply stores. In 2002, Elena began to sell her artwork and www.ElenaRoche.com was launched. ​

Her unique watercolor painting technique was recognized in The Watercolor Artist’s Bible by Chartwell Books and in The Best of California Artists and Artisans by Kennedy Publishing. Her colored pencil fruit drawings were used to illustrate an article in the Flaunt Magazine. Then and now, she can capture the likeness and character of her subjects whether it be a portrait in pastel, colored pencil or a charcoal sketch. But after all these years of artistic exploration, Elena most enjoys painting Southern California’s landscapes and flowers en plein air.

In 2008, Elena with her husband, Warren, and their five children opened a new hospitality business, the Topanga Canyon Inn Bed and Breakfast with Art Gallery. This became Elena’s main gallery. Her work is exhibited throughout the twin villas of the Casa Rosa and Casa Blanca. At nearly 8,000 sq. ft., the Topanga Canyon Inn features over a hundred of Elena Roche’s paintings from early floral watercolors to pastel portraits to the latest California landscapes and coastal paintings in oil.

Beyond, of course, the opportunities provided to this young artist, Elena Roché is deeply grateful to this country for allowing her the freedom to command her own life. Memories of Russia are proof to her that only in America could she be an artist, an artisan, a wife and mother of five home-schooled children, and a bed and breakfast owner, all at the same time. Having once only known life to be hostile and ruinous towards hopeful spirits like herself, she firmly believes in promoting goodness through beauty in fine art. Elena’s goal is to share the beauty she sees around her with all the souls she can reach, and to help the world to be a better place.

We’re always bombarded by how great it is to pursue your passion, etc – but we’ve spoken with enough people to know that it’s not always easy. Overall, would you say things have been easy for you?
My most difficult struggles were left behind in Russia. Since I moved to the suburbs of Los Angeles, no hardship has come close to the misery and unfairness I had to live through in the Soviet Union or in the aftermath of its collapse. Even during the “Great Recession” of 2008, when my art sales plummeted and my husband’s business suffered huge losses, the situation wasn’t nearly as bad as the one I had endured back in my college years in Russia. Back then, I faced starvation while the corrupt Moscow police left young female students like me to fend for ourselves in the gang-infested student housing. When I remember the deep psychological changes, I started going through on day one of my arrival in America, I see that it was like a rehabilitation process, only my recovery was from the scars left by an abusive, depressed, angry people who made up a majority in a spiteful, lawless and Godless society. Looking back farther, before I had ever even conceived a thought of immigrating to the United States, as a child and teenager I knew I was profoundly different from most Soviet and Russian citizens. Although, some years later during my immigration process, I didn’t know very much what to expect of a life in Southern California, second-hand knowledge of the west assured me it couldn’t be as bad as life in Russia. My expectations were exceeded. In essence, the will to happiness that I found in America was that something I had always felt lacking, but could never quite identify, back in Russia.

Being creative is a gift and a curse. There are just too many projects and ideas in my head. Narrowing them down to what is most important, what I wish to be remembered for, is a challenge. So, I’m taking them one at a time. At the start of my life in America, it took several years for me to really familiarize myself with various mediums, since art materials were limited in Russia. I did some clothes design, but decided not to do it commercially. I took some portrait commissions but decided that wasn’t for me either. When I started painting local landscapes and getting more involved with local artists, I liked the flexibility of choosing my subjects and taking my time to complete the work. Working en plein air and outdoors allowed me to learn a lot about the local nature, natural history and geology, and develop a strong appreciation and understanding of the area where I’m painting. There are a lot of hidden natural treasures in and near Los Angeles just waiting to be interpreted in a painting, and I made it my job to capture it on canvas. I love being part of the plein air community.

Painting en plein air also means I have to be athletic and keep an eye on the weather, sun, wind and tides. Sometimes I hike up a mountain while caring 22 lbs. of gear on my back, stand for two hours while painting and then hike back as it is cooling down and getting dark after sunset. Sometimes I get rained on while painting. Sometimes a wave sneaks up on me at the beach. Sometimes the wind wants to knock my pochade box over so I load it up with rocks to keep it grounded. It’s an adventure every time. Last April, I painted at the highest point in the Santa Monica Mountains, Sandstone Peak. This was quite a climb, but the one-and-a-half-mile hike to the top with over one thousand feet in elevation gain was worth it. The views from the top were majestic, and after the exhausting trek with all my gear I felt like I was on top of the world, in both senses. My painting came out really well and I noted a few more spots for the future. This November, I painted in Laguna Beach. The coastline there is beautiful in such a grand yet delicate and fine way, and so well organized is the town that it was pure pleasure being there and working there.

So, as you know, we’re impressed with Studio Gallery Elena Roche – tell our readers more, for example what you’re most proud of as a company and what sets you apart from others.
En plein air painting started a very long time ago. French impressionist heavily promoted it, and Russian and American artists were among the great contributors to the plein air techniques and styles. I am continuing their traditions in a contemporary way. I see the landscape, its nuances, colors and shapes differently. When I create a painting, I focus on the part that mesmerizes me the most because it is the essence of the scene. It may be the obvious or something that most viewers overlook, but when it is pointed out to them through a painting, they are pleased to see it too. Sometimes viewers tell me they see those subjects differently after seeing how my paintings portray them. And others say they didn’t realize that where before they only saw grey or black or white, they now see there are really many more colors for the eye to explore. Now and then, my paintings revive memories of places where the viewers passed pleasant times. Most remark that this art makes them feel at peace. And that, even beyond the enjoyment of painting, is what wills me to create. It is deeply contenting to know when I have affected people in a positive and lasting way.

I’m very happy to share what I know with art students willing to take the time and make an effort to learn. I give workshop-style classes that take place on locations in Malibu, doing a demonstration first and then instructing my students as they follow with their own works. Unlike many art classes around town, neither I nor my students paint from photographs. Being surrounded by nature is the best way to learn to render it. You can certainly gain a lot from studying a photo, but if you use it as your only reference your artwork will be limited by what your camera captured. I teach students to see all the nuances and details, then focus on what is singularly essential to convey the feeling of a place. They learn to create a painting, not make a copy of a photograph with paint.

So, what’s next? Any big plans?
For the past twenty years, I have been painting around Los Angeles. I have collected a lot of data on so many great plein air painting locations that I am planning to move forward with sharing it with other artists from around the world. I am building a blog and a map with detailed descriptions of locations and images of paintings that were created at those spots. This way, new artists or out-of-town artists planning a painting trip to Los Angeles will know not only where to go and what to expect, but what kind of views there are in different seasons and times of day. I am inviting other artists to participate in my project. 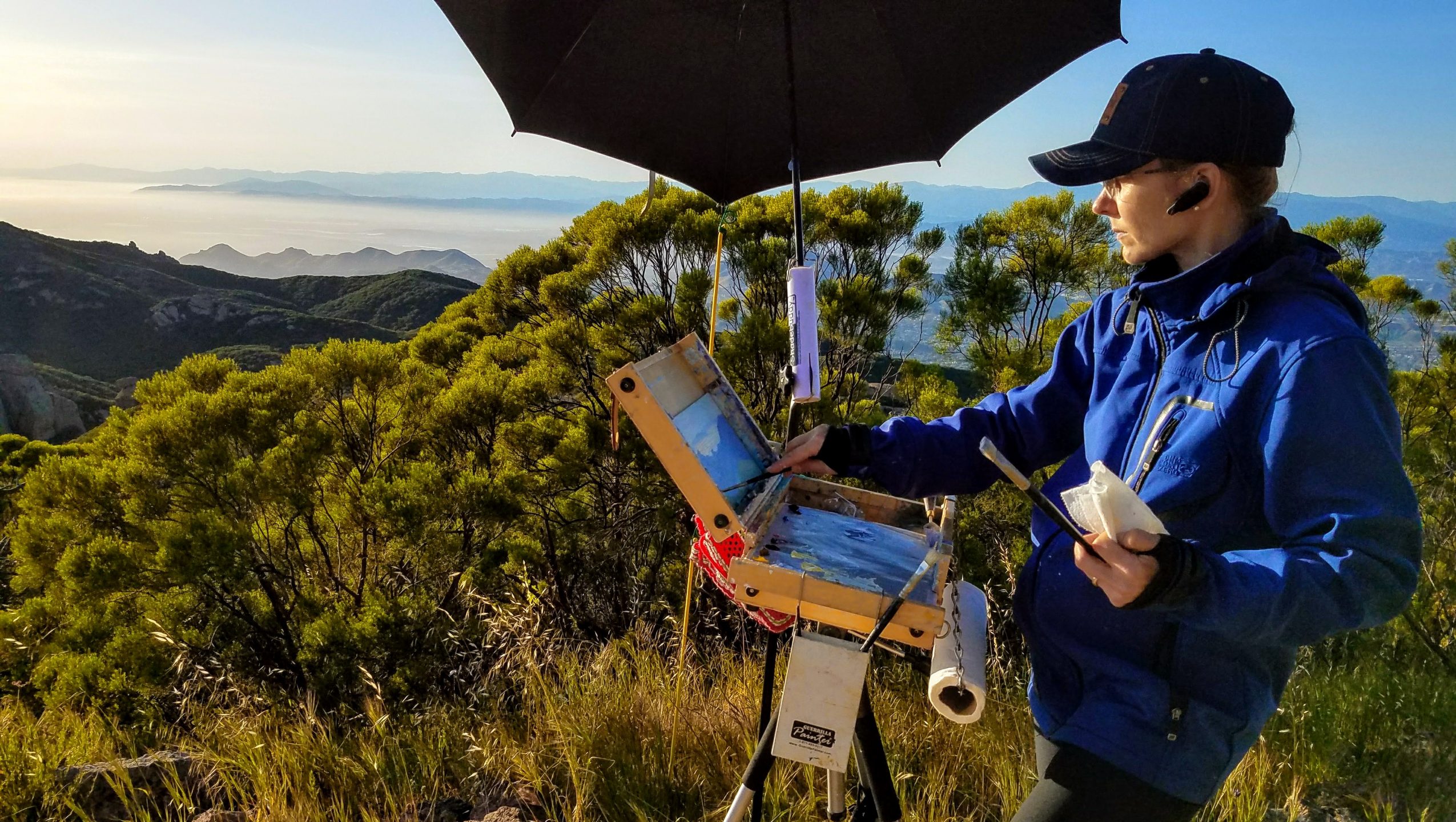