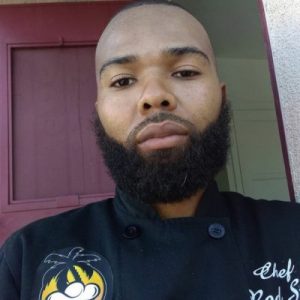 Today we’d like to introduce you to Chef Rod Steele.

So, before we jump into specific questions, why don’t you give us some details about you and your story.
I go by the name Chef Rod Steele. I was born August 17th 1988 and raised in the Westmont area of South Los Angeles. My first passion was to become an artist. I came up as an artist throughout my childhood all the way up to high school. I was always sketching portraits from magazines,and drawing houses my favorite classic cars, and favorite musicians.

Ever since I could remember I witnessed my father in our home kitchen “throwing down” and cooking home meals from self taught recipes of his mother. The house always smelled like a southern kitchen. This was my introduction to witness a man in the kitchen. I took a few home economic classes at Washington Preparatory High School and I grew a love for food. The fact that I can prepare food myself felt like I cracked the code to my life.

As a child I started to gain entrepreneurial skills and started to invest my money into my own snacks. I started to sell Capri-sun juices, candy bars, and other snacks from grades 6 to 12. It wasn’t bright clouds and pretty roses growing up in south Los Angeles. Towards the end of high school, I knew it was time for new beginnings. The gang violence in the mid- 2000’s was at a high. The young men who lived in my neighborhood lives were short lived behind the unfortunate conditions and influences that took place in our community. Making it home before the street lights came on was a challenge.

My parents thought it was best for me to move to Maryland in May of 2007 to live with my older cousin Fareed Hyatt. Fareed is the first college graduate and the first to receive his master’s degree at the University State of California. He graduated Howard School of Law to become a criminal defense attorney. I took the opportunity as a blessing for a new perspective in life so I moved at 18 years old. I lived in Maryland for seven consecutive years.

I immediately dove into cooking at 18 years old. I started working at IHop for a year throughout my first year of college at the University of the District of Columbia. I carried my love for drawing houses and enrolled into the architectural program. Near the second year and first semester of college I realized that the increasing amount of debt was not for me.

My passion for cooking accelerated and lapped my drive for architecture. From 2008 to 2014, I continued to work in the D.C., Maryland & Virginia (DMV) area, at the top hotels, restaurants and country clubs. Places like Black Salt Seafood restaurant, Blacks Bar and Kitchen, and Black Market Bistros owned by celebrity Chef Jeff Black. I became an executive chef at the age of 22 towards the end of 2010 working for J Marie’s restaurant. At this time I started my catering company and named it Cali Kitchen Catering. My goal was to bring a taste of California to the DMV.

I was three and a half years into chasing my art. It was my time to look in the mirror and be proud of who I have become. I made my first newspaper appearance during the ribbon-cutting ceremony with the city mayor of Hyattsville, Maryland. Places like Black Salt Seafood in D.C. gave me the blueprint toward becoming a chef. They were literally the best chefs (to this day) that I worked under. In 2012 I had the pleasure of cooking for first lady, Michelle Obama, and her secret service security. That night the restaurant was closed to the public. I also worked at the River Bend golf and country club located in Great Falls, VA, and help cater events for 1000 plus people. There were firework shows, swim meets, and the most fun of all, grilling on the golf course during bright summer days.

Around the year 2014, I packed all of my belongings and drove alone back home to Los Angeles, Ca for three consecutive days and six hours of sleep. I hit the ground running and worked for places such as Soho House West Hollywood, Watergrill Seafood, Sunset Tower and Estrella’s owned by celebrity chef Dakota Weiss. After January of 2017, I quit working for others and dived fully into catering for my own clients. I started to book catering events and pop ups events throughout the whole city. I became a Los Angeles county vendor which lead me to getting contracts to cater for the Los Angeles Department of Mental Health Centers. I was also able to build my social media presence for my business.

Overall, has it been relatively smooth? If not, what were some of the struggles along the way?
Back in the year of 2013, (while i was still “grinding it out” in the kitchen) I experienced a life-changing shift of consciousness when I lost my older sister Raquel Renee Steele. She was admitted to the Centinela Hospital in Inglewood,Ca, to birth her second child. Due to unsanitary conditions at the hospital setting, a staphylococcus infection penetrated my sister’s bloodstream through her Intravenous therapy, causing her blood to contaminate. These unbearable circumstances lead to the death my sister after only four days of giving birth to my niece. After this tragedy, I had become the oldest of eight siblings and I believed it was time to leave Maryland and move back to Los Angeles,Ca. I wanted to become a role model for my younger sisters and brothers and I did just that. I packed up my truck and hit the road alone on a three-day road trip from Maryland to Los Angeles, Ca.I kept chasing my passion while in Los Angeles. I’ve catered and cities such as: Long Beach, Pomona, Burbank, San Bernadino and so on. This was all from “word of mouth” and self promoting.

On May 5th 2016, my life was turned upside down when I was pulled over by the Hawthorne police while turning into a grocery store parking lot. Everything seemed fine until the officer stated that I had a warrant for burglary in Maryland from 2011. I told the officer that was impossible because I had moved back to Los Angeles in 2014 and have been stopped by Maryland police plenty of times times but never heard of this matter. I was arrested and taken to the Hawthorne police station and kept in a holding cell for over six hours without phone calls. I started feeling like I was in a movie because moments later two US Marshall officers walked in to take me, shackling my ankles and wrist. I was taken to the Los Angeles county jail twin towers Downtown Los Angeles. This is where I was kept for seven weeks total. Eventually, I was transferred to Santa Clarita wayside facilities around the people who were facing life and heavy sentences.

After being juggled through court and authorities not having any details about my case other than the 30 year sentence I was facing, I was expedited back to Maryland to face the matter. I was shackled ankle to wrist with 9 other men that were picked up along the way and also traveling state to state in an eight passenger van. It took a little over a week traveling across the country. We made stops at every “hole in the wall” family owned police stations to federal prisons for rest stops and restroom breaks. I slept everywhere from Kansas, Denver, Ferguson, Illinois, Kentucky, and the list continues. I witnessed the most unsanitary conditions along with upfront racism from authorities, starvation, and neglect all while innocent. I finally reached Maryland to face charges and spent 12 hours in the Montgomery county jail before being bailed out by my cousin Fareed Hyatt. Fareed took on my case as my defense attorney.

I, of course, lost the job that I had when this all happened. I had to dig in my savings and book a flight back to Los Angeles to pick up the pieces of my life which seemed to be crumbling. I was in Los Angeles and I was out on bail facing thirty years while back on my job hunt. I desperately needed a job to bounce back to afford a future flight to face trial. My family thought that I was insane to go to trial, but I wasn’t going out without a fight. I booked a nonrefundable flight with my last few bucks ready to fight to the end. When I received a call from my attorney/cousin one day before flying out he stated that he had some news to tell me. Suddenly, there was immediate silence over the phone before my cousin proceeded with the news. My cousin told me that all charges had been dropped against me. It was brought to my attention that the pocket knife I kept in my backpack was stolen by my co-worker back in 2011. In the beginning it was said that my DNA was found on the pocket knife that was originally mine. However, Investigators concluded that my co-worker’s DNA had also been found on that same knife and as a result he was at fault based upon their findings and evidence.I walked away a free man maintaining my innocence and started attacking my goals more than ever.

I met my beautiful girlfriend and now fiance Chenelle. She was everything I prayed for. She’s a driven dedicated nurse and business woman working along my side catering events and serving clients. I couldn’t do it alone. Every real man has a great woman who pushes them to reach their maximum potential.

I continued to get booked for catering gigs and this showed me that everything happens for a reason. Alone, I understood that my purpose was divine.

We’d love to hear more about your work.
I am a private chef with a soul purpose is to innovate while offering a unique approach to prepare healthy, flavorful, gourmet meals and desserts all over Southern California. I look forward to preparing healthier food options for new clients as I introduce meal preps and creative menus ideas. I enjoy cooking meals from scratch without precooked sauces or foods loaded with preservatives and hidden ingredients.
The type of events I cater include:
Exhibition opening cocktail parties

Meals for the elderly 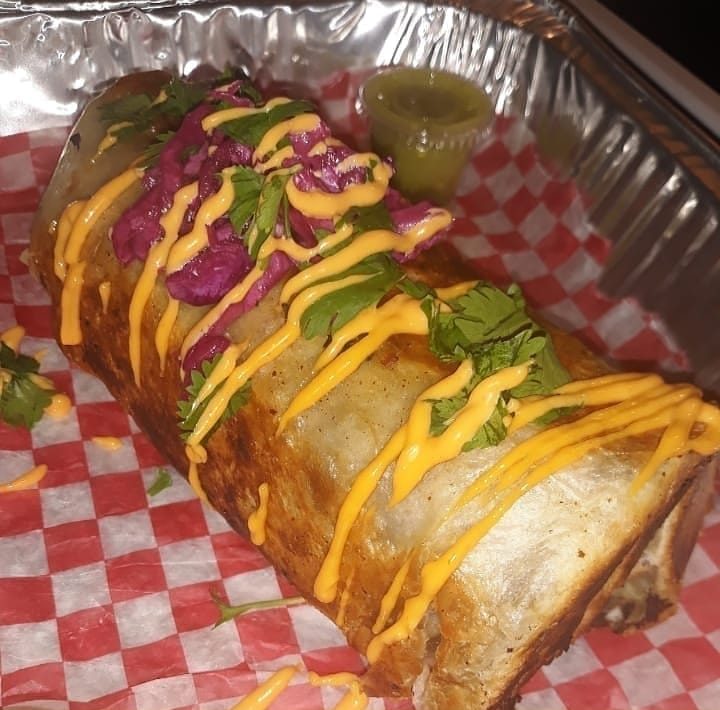 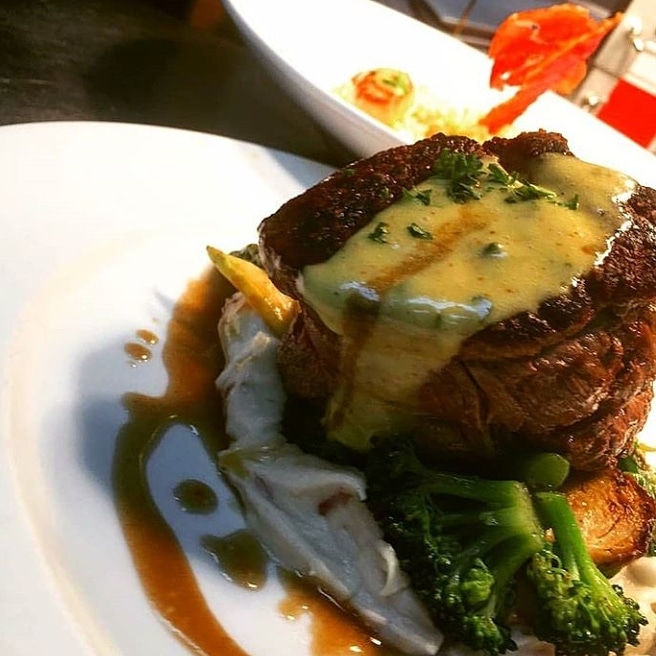 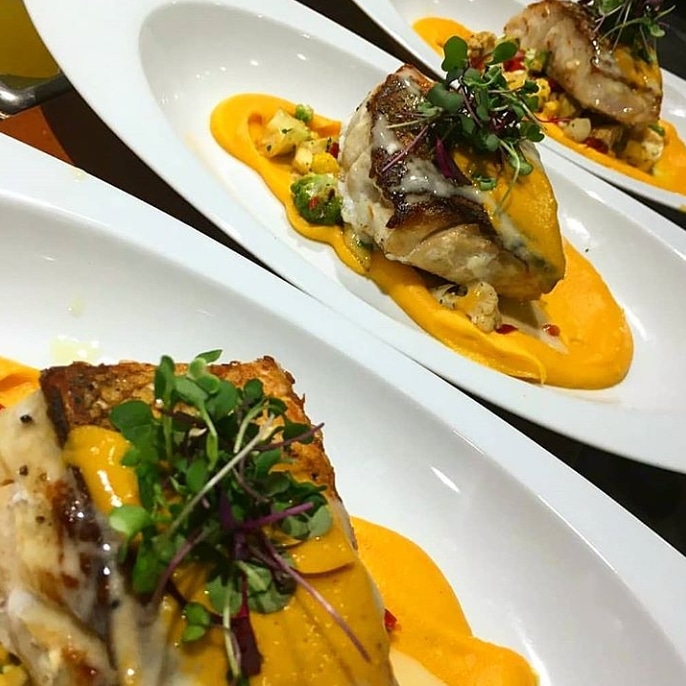 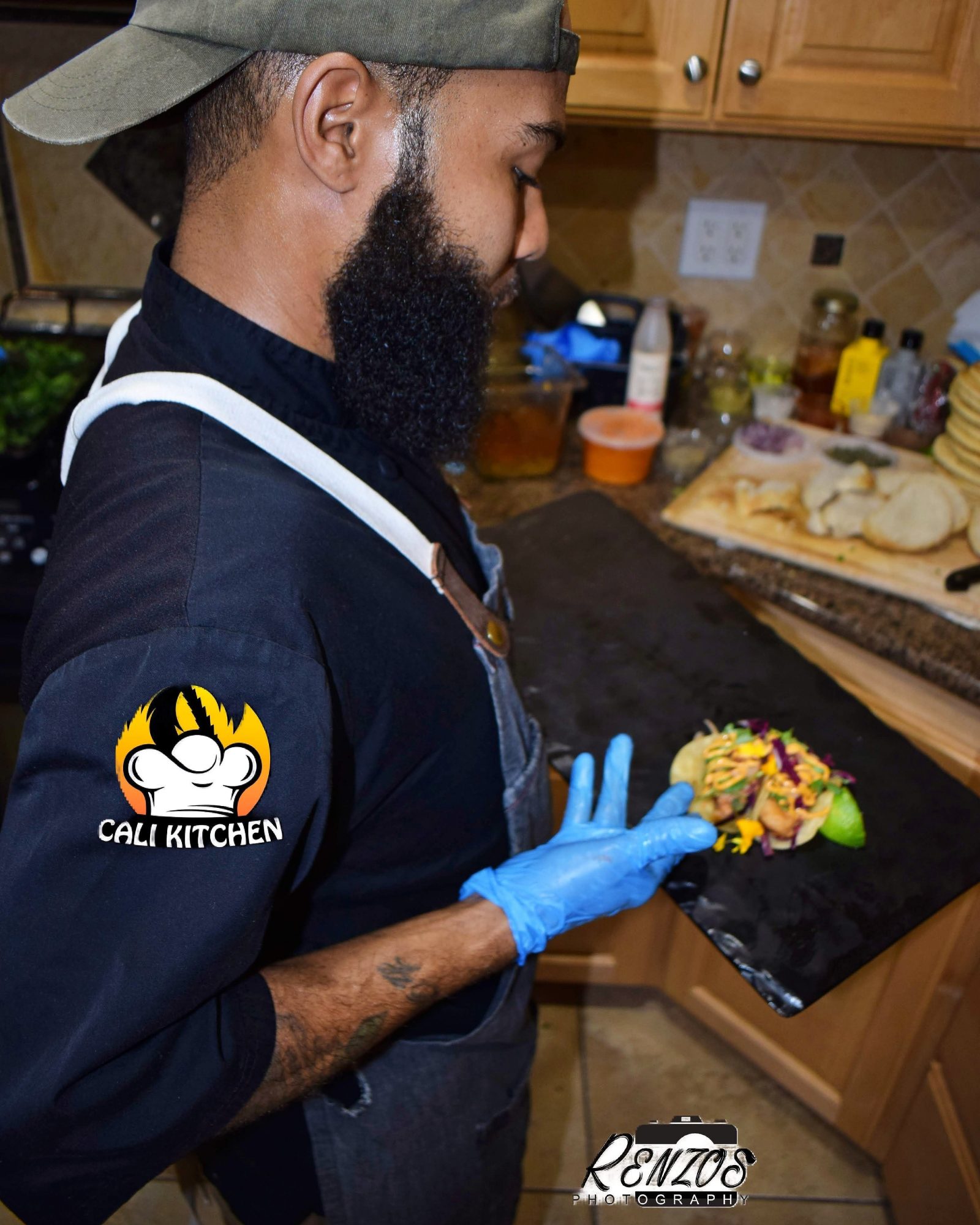 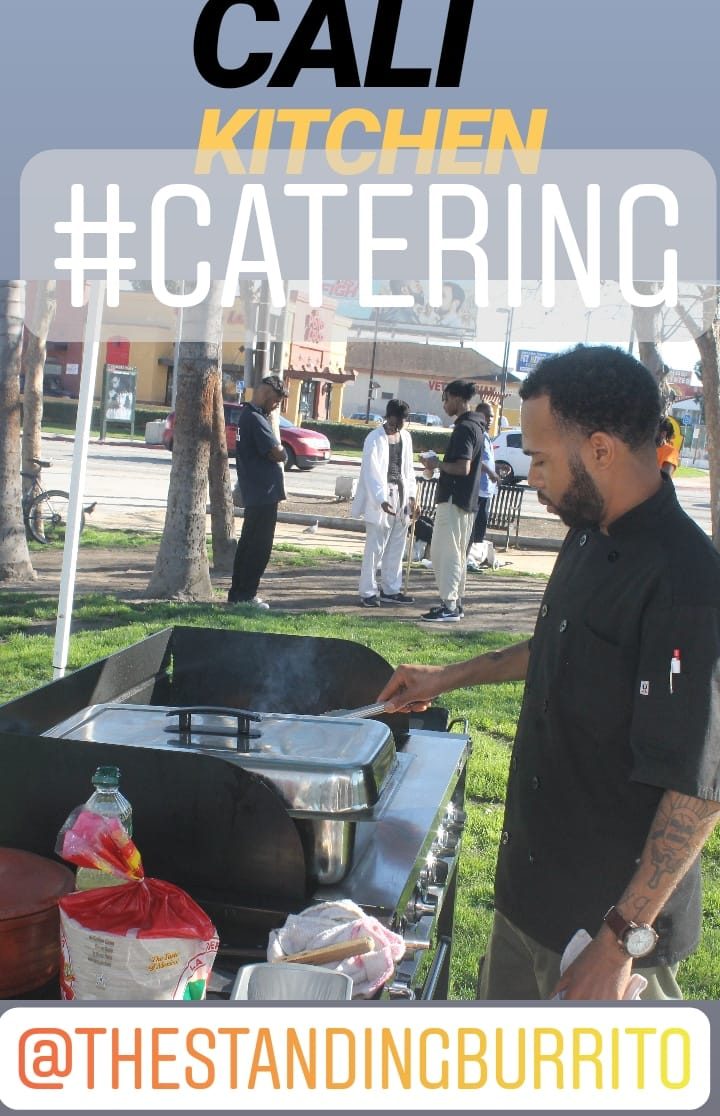 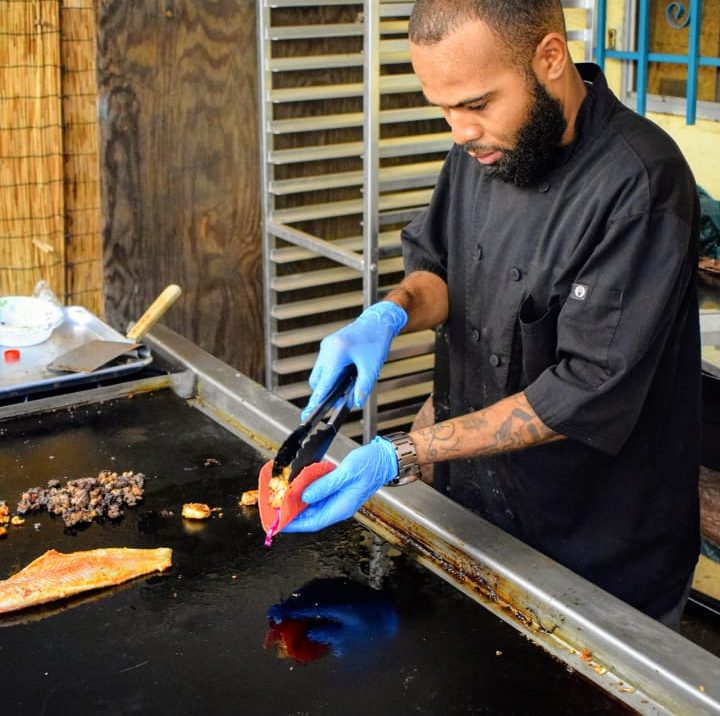 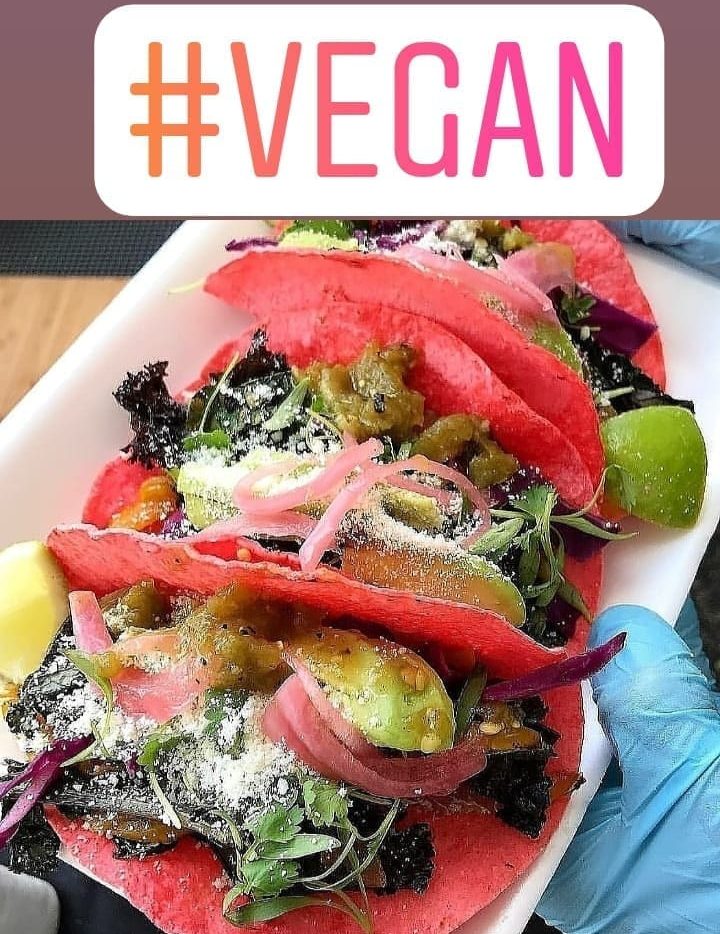 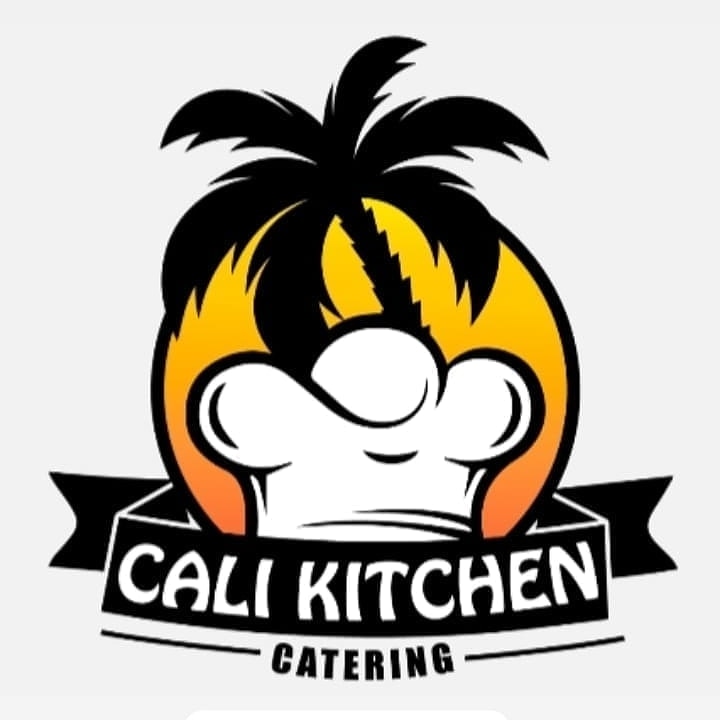