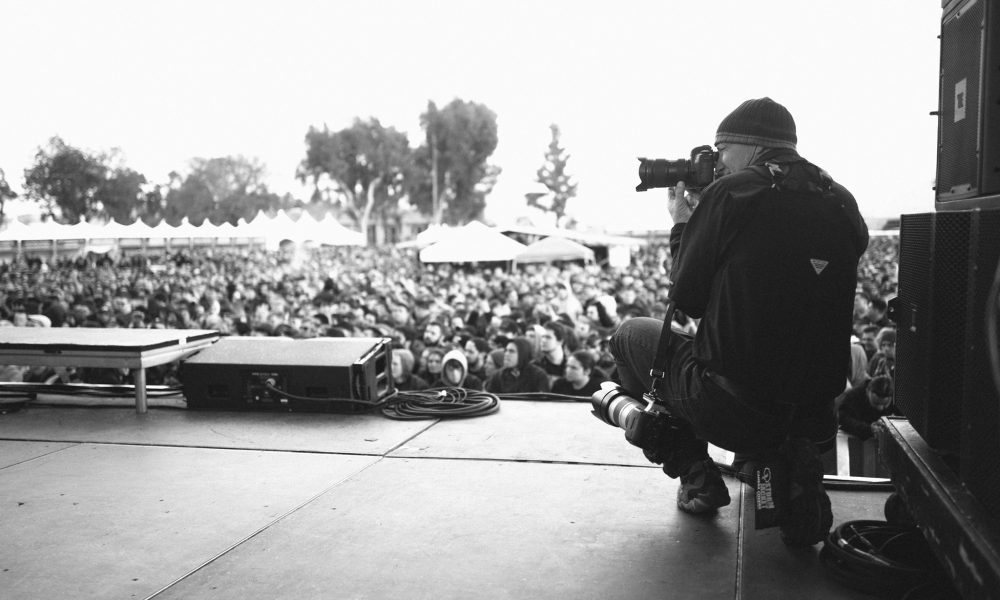 Today we’d like to introduce you to Steve Brazill.

Steve, can you briefly walk us through your story – how you started and how you got to where you are today.
I was born and raised in the Inland Empire area of Southern California, Riverside to be specific. When people ask me what I do for a living my answer is usually something like “it depends what day you ask me”. Still, almost all of the things I do, and there are a few, connect to each other in some way.

Like most people, music has always been a huge part of my life. I remember when I was in my teens walking down my street with my friends singing Led Zeppelin – out loud, very loudly. There was always something about the lyrics, or the energy of the music, that made me feel something. When I was about 14 I got a guitar, and I carried that thing everywhere. I would have loved to be in a band but I wasn’t really good enough, and I couldn’t sing. When it came time to go to college I ended up picking Information Systems as a major, but in 1979 I didn’t really know what that was – or what it would soon become. That topic will end up making a come back later in my life.

While on a visit back home a friend of mine invited me to tag along to the radio station he worked at from midnight to 6 am, and at that moment I was hooked. I left college to pursue a career in radio, and 40 years later I am still on the air. That change has triggered virtually every great thing that has happened to me in my life. I worked radio in different cities from Detroit to the station I’ve been at for 32 years, KCAL FM in Redlands, CA. Radio led to me doing voice-overs and emceeing. I ended up DJ’ing in clubs, and that… in some indirect way… led to me meeting my wife of almost 30 years, with whom I now have a 26-year-old son that inspires me daily.

While the music was making me happy, there was a point a family friend asked if I wanted to come work for him to teach computer software. At this point, the old Information Systems had morphed in a wonderful world of personal and business computing, and the geek in me agreed to give it a shot. I started learning and teaching software, and that led to me getting certifications and falling in love with I.T. To this day my main “business” is as an I.T consultant.

About ten years ago I started teaching myself photography. I wanted to take pictures of my son in High School marching band, and what I found out was that photography was perfect for a tech nut like me. That geek that has been in me my whole life was about to merge with my love of music. In those days radio people could usually get tickets to good concerts, and we were often allowed to get into the Meet N Greets with the bands. I asked my Program Director a question that would change my life – could we get photo passes? I explained I might need a business card, but normally only salespeople had cards. He sent me the station logo and told me to make my own. Two weeks later I was the photo pit at the old Universal Amphitheatre photographing Heart and Def Leppard. Music photography, and photography in general, has now also become a huge part of my life. I created and host the video podcast Behind the Shot, also available in audio-only. On each episode, I try to get inside the mind of a great photographer by dissecting one of their photos.

It seems as though everything comes back to music at some point though. A number of years ago I started doing a lot of emcee work for Riverside, such as their Summer Concert Series, and that led to me to hosting a few TV shows for the city’s TV station: Riverside Monthly with the Mayor, and a show called In Studio where I interview bands or musicians that have some connection to Riverside. During the original opening for that show, I said that I believe that we can define the key moments in our lives by the songs that were playing at the time. Whether it is Led Zep for a kid walking down the street, or whatever your favorite band is, music is a key part of living life. At least it is for me.

We’re always bombarded by how great it is to pursue your passion, etc – but we’ve spoken with enough people to know that it’s not always easy. Overall, would you say things have been easy for you?
I’m not sure my struggles are different than anyone else’s. Most of them, as with many people in the creative world, are due to confidence, or a lack thereof. It’s the internal battles of self-doubt, or just trying to raise a child. Struggles are not something I deal with well. As well as things have worked out for my life, there are areas I could have done better, where I could have been a better human being. I feel like that regularly. But here’s the thing, every day I see my wife smile, I know my son is now a success on his own at a level that will exceed anything I have ever done, and I hope I have helped a few people. So really, who would ever want a smooth road. This road got me here, so I will take that one every time.

We’d love to hear more about your work.
As I mentioned earlier, I do a lot of different things, but today I am mostly known for my photography and my podcast. In the photography space, I specialize in live music. I try to combine my love of music and photography to capture those defining moments that happen during a live performance, on stage or behind the scenes. What I am most proud of is the relationships I have managed to build, relationships that have led to being hired by venues or promotion companies, or to license images. One wonderful thing about photography is that it is at its core subjective art. No two photographers will shoot the same concert the same way, and so my “eye” lets me stand out from the others.

With my podcast, I am just proud of the content I have been able to create. While my photography all relates to the music world, the guests on Behind the Shot span all genres. I have been able to interview some of the best there is to better understand how they work, and why they may have made the choices they did in making a photo. This is also where my radio background comes into play, which I think helps set my show apart from others.

Has luck played a meaningful role in your life and business?
I believe it was Louis Pasteur that said “Fortune favors the prepared mind”, but I think of it as “luck favors the prepared”. Luck plays a role in so many things. A company seeing your photo on Instagram causing them to reach out about a job, or just being in the correct spot so that when a guitarist jumps you’re not stuck photographing their back.

That said, to a point luck can be predicted and controlled. A little research before a concert may tell me that the lead singer of Cage the Elephant goes into the crowd a lot, or that a singer always holds the mic in their right hand – meaning I may want to be to their left to photograph their face unobstructed. I may learn that a guitarist always pulls back from the mic leaning one way, or that an artist seems to like a specific type of image of themself. All of these things don’t remove luck from the equation, but they do reduce the surprise of it. 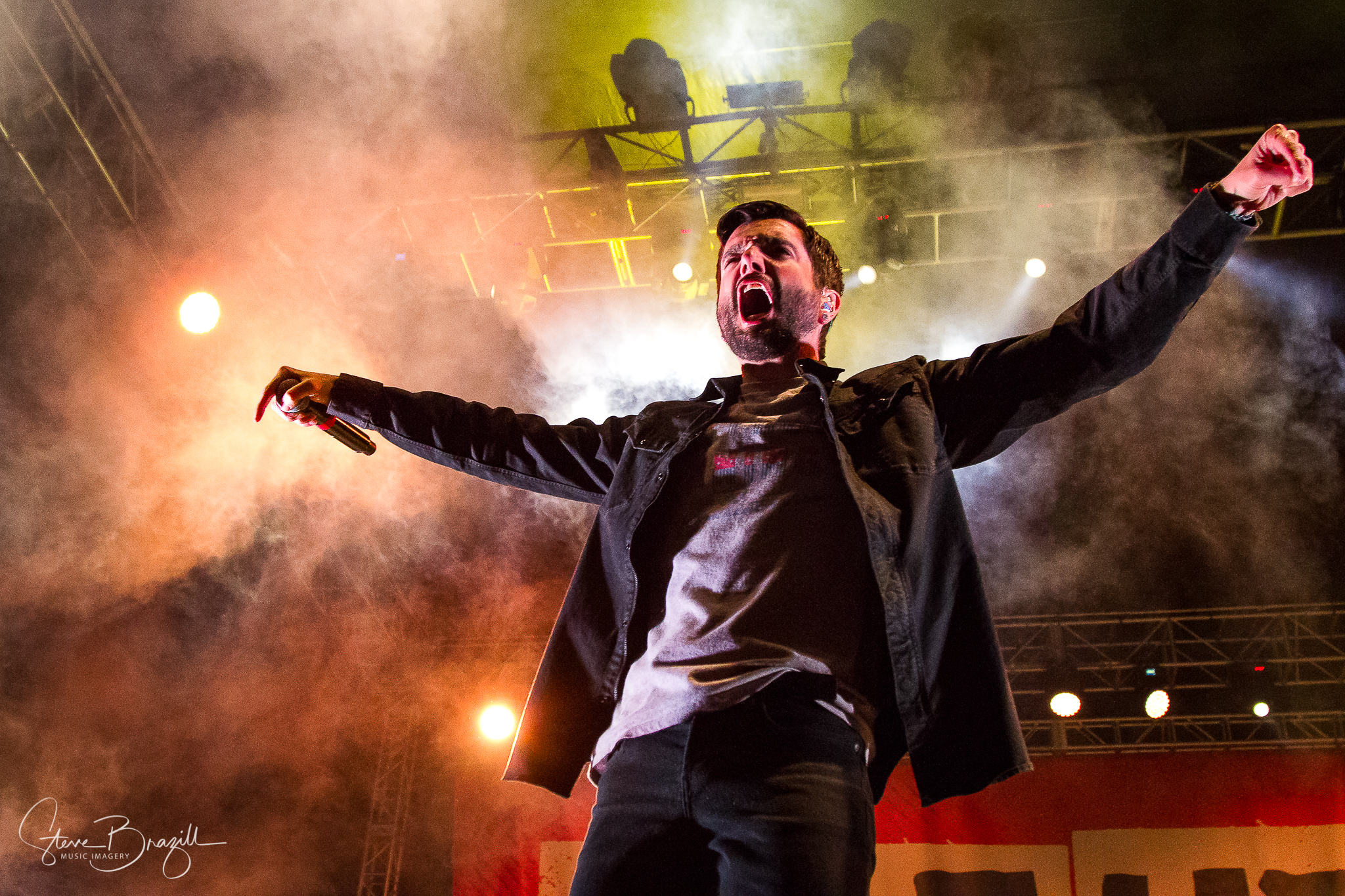 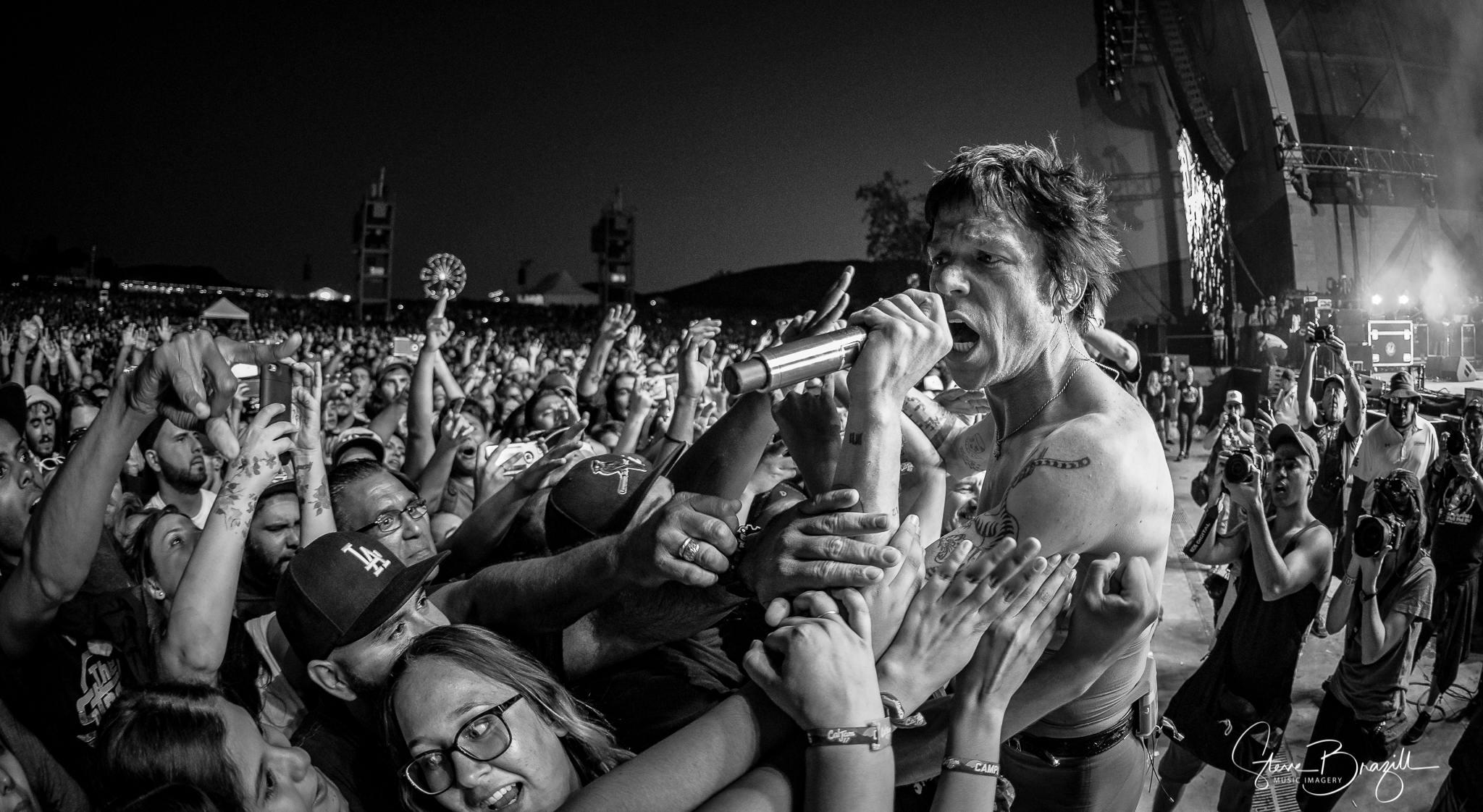 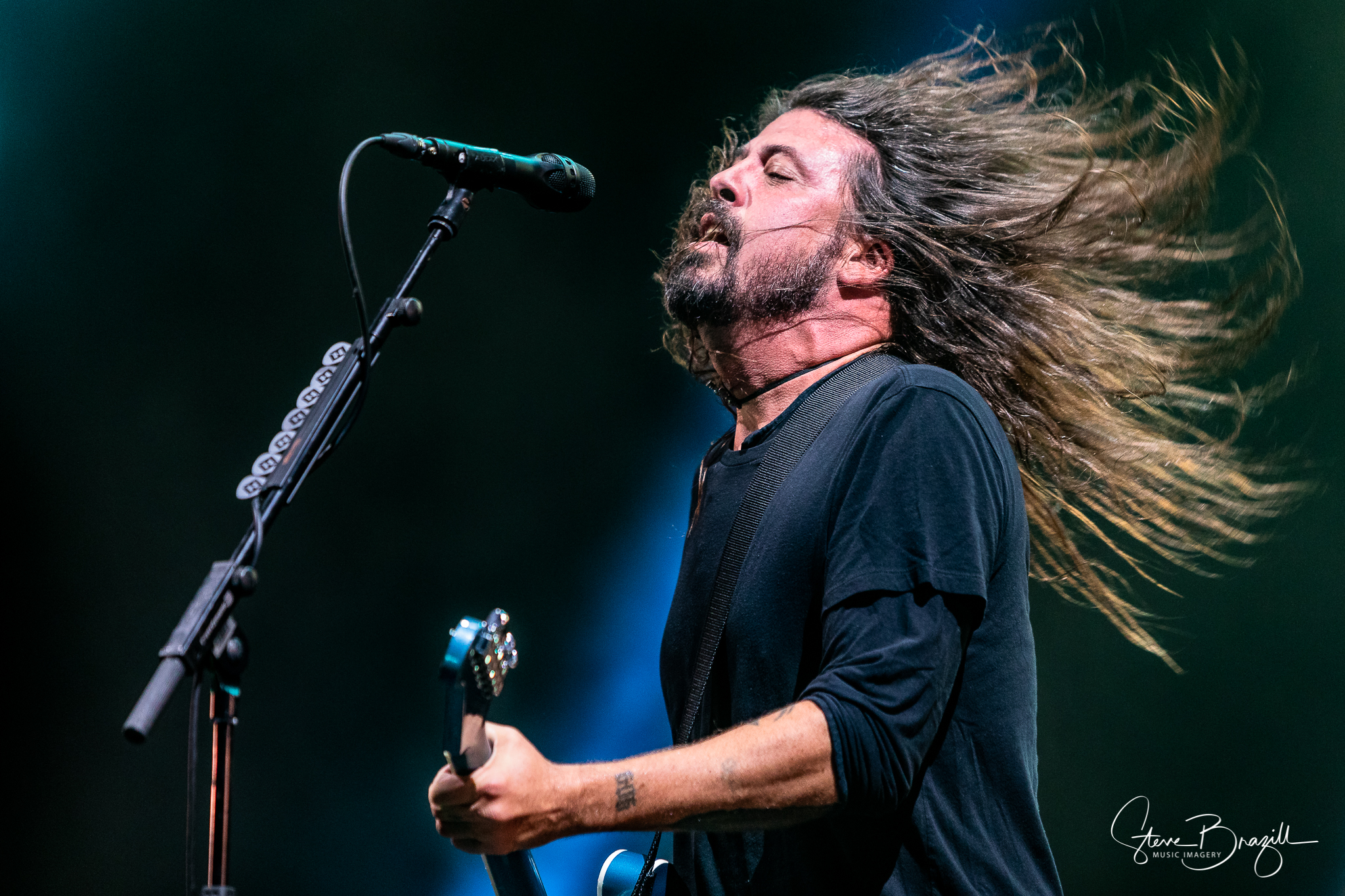 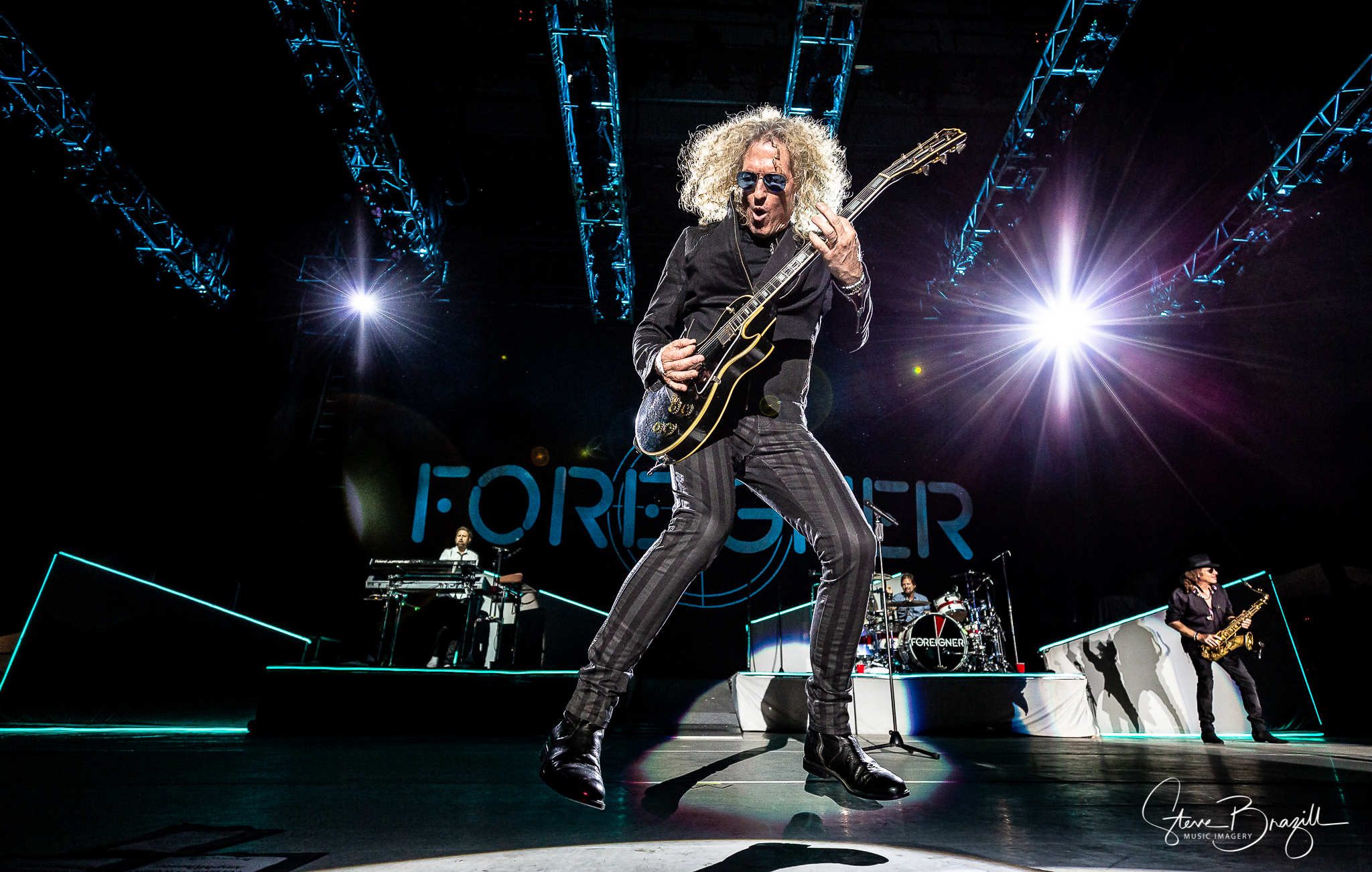 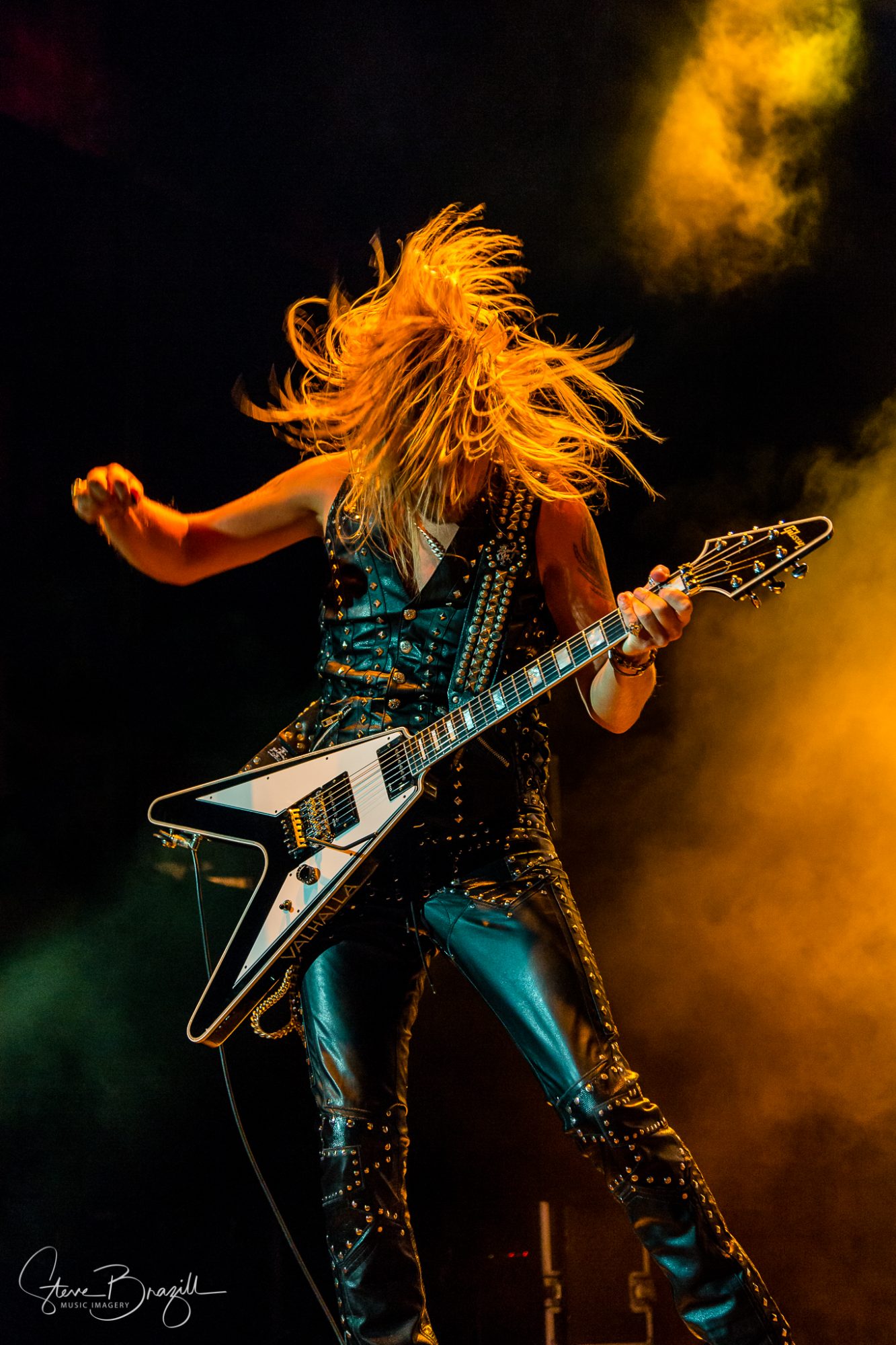 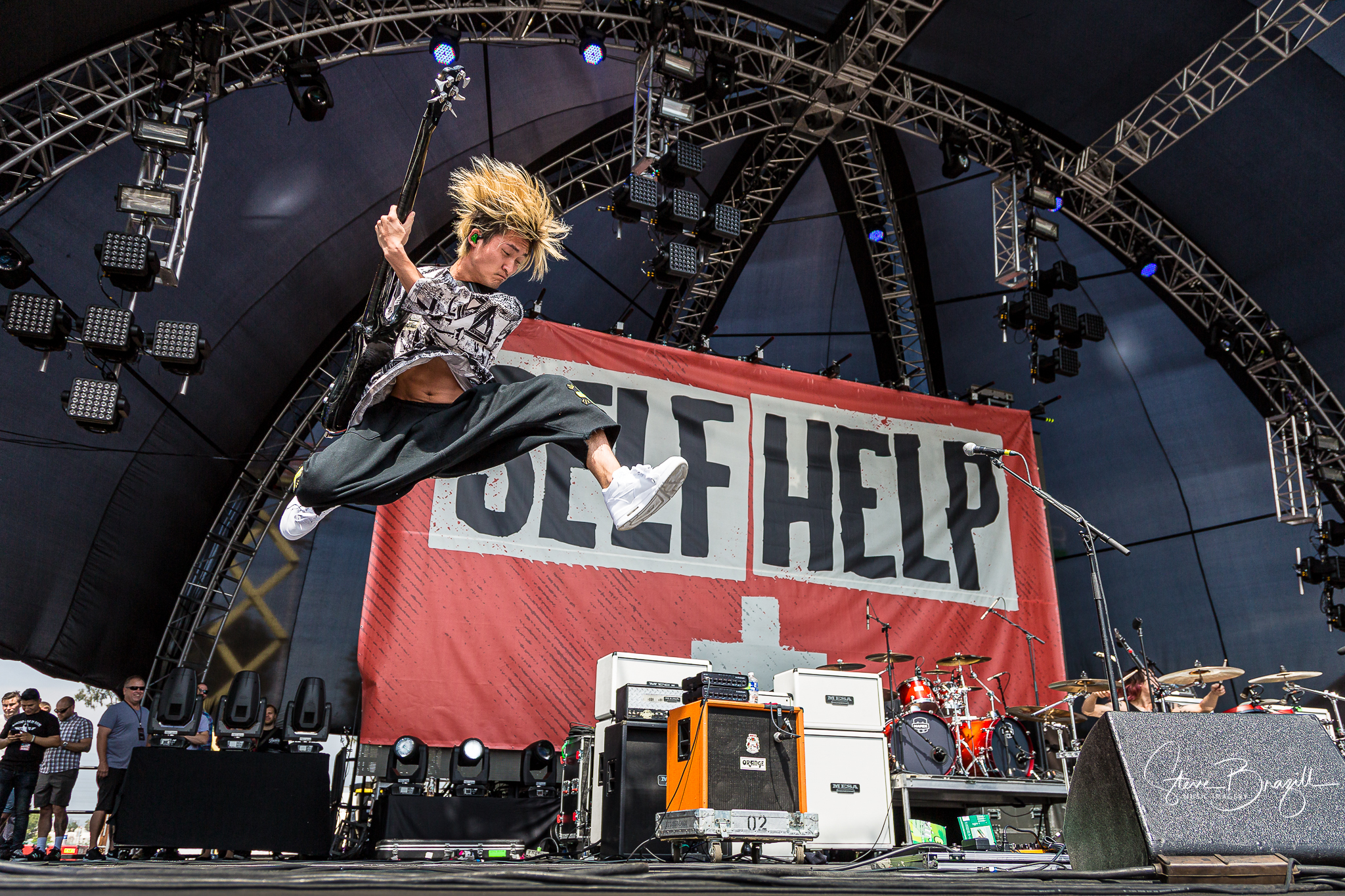 Don’t just take a shot, make one. Everyone else was shooting from the right, but I wanted to get the festival logo, and position the jump between the lights. One OK Rock at Self Help Festival. 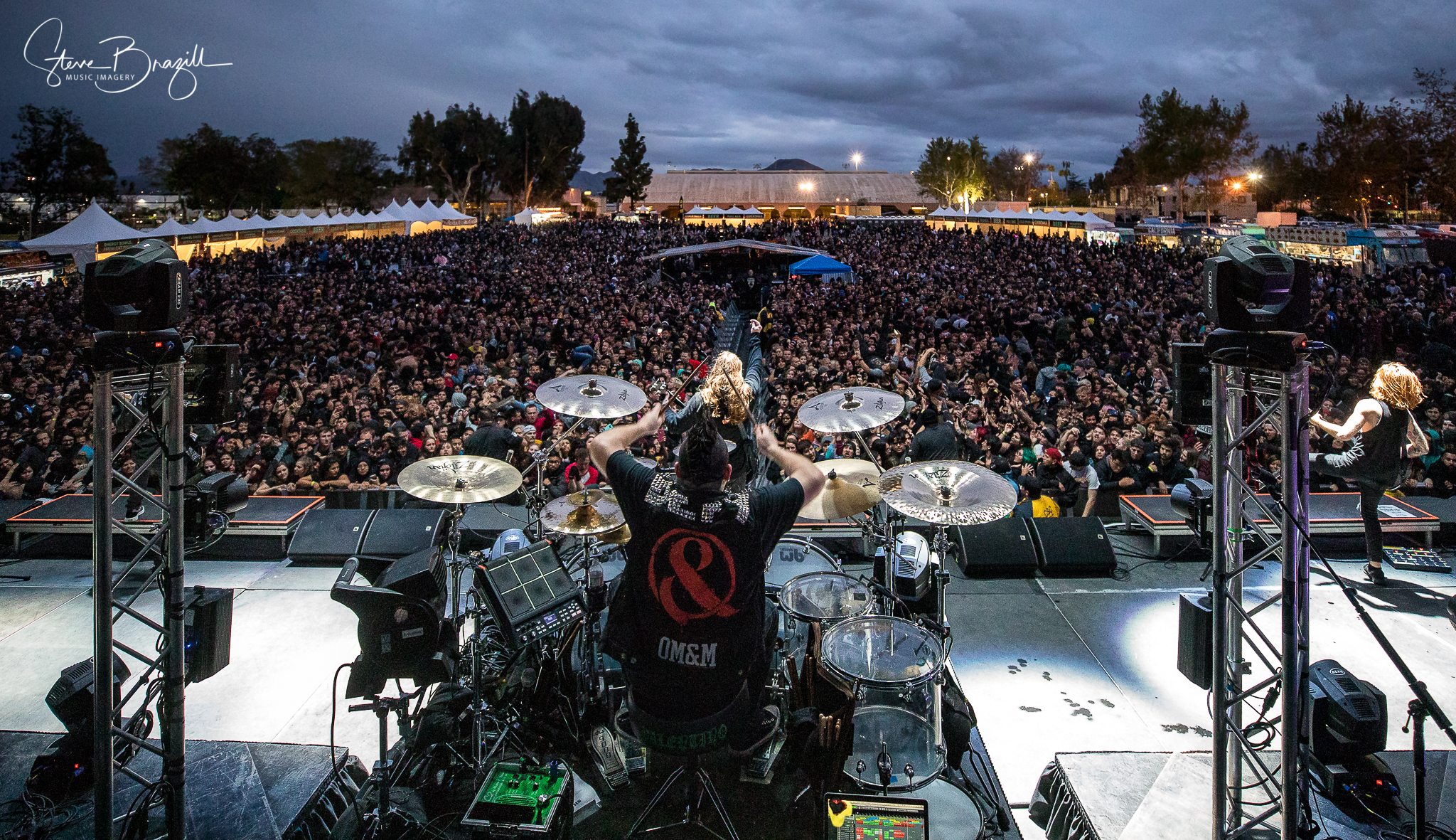 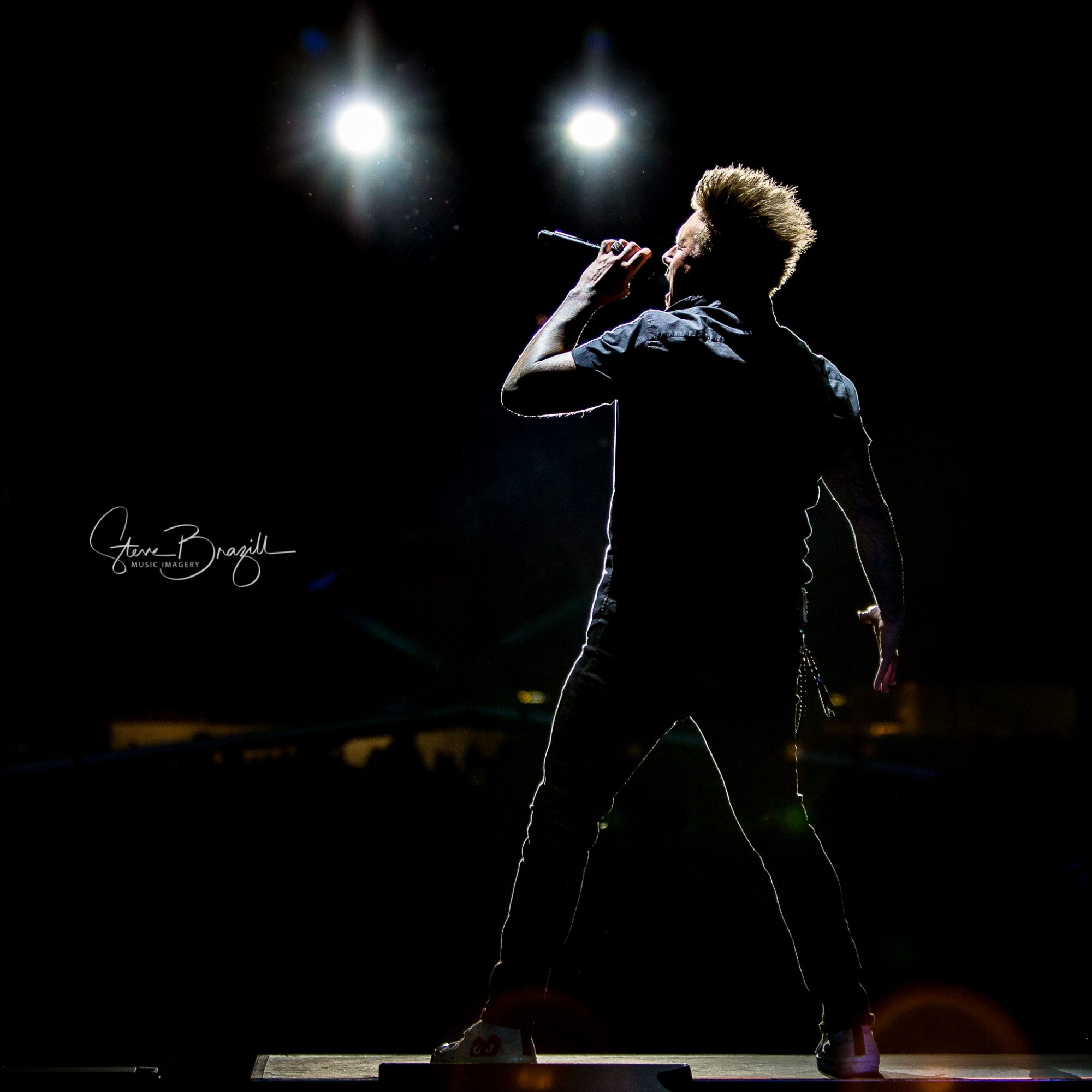 Image Credit:
All photos credit to Steve Brazill
*** EXCEPT the “Personal Photo/Headshot” (AdamElmakias_SteveBrazill_at_Self_Help_2048px) which is credited to Adam Elmakias.