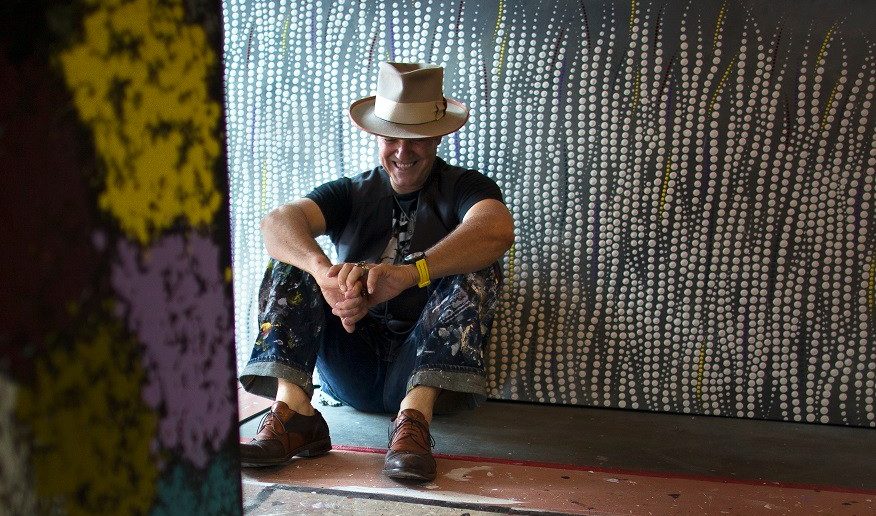 Today we’d like to introduce you to Stephen Rowe.

Stephen grew up in a small mining town in the outback of Australia called Broken Hill. It’s about 1,144 Kilometers inland from Sydney, where it’s sweltering hot in the summer, and it can get freezing cold in winter. Early on Stephen enjoyed art and showed an early talent for drawing, painting and other artistic endeavors. However, this energy and passion for the visual arts was temporarily put on the back burner for other pursuits. He left school at a young age, 14 and 9 months to be exact, and did his trade as a carpenter, falling in the footsteps of his family members. During this time, he raced motocross for Suzuki and was sponsored by a local dealership. To keep in shape for motocross, he did four years of boxing training, and believe it or not, he also studied classical ballet – a rarity for a boy from Broken Hill. At the age of nineteen, he left his hometown and moved to Adelaide, where he was offered a full scholarship for two years to study classical ballet after completing a summer program. Ultimately, this led to Stephen’s sixteen years career as a professional classical ballet dancer, starting with the Western Australian Ballet Company and then moving to the Queensland Ballet Company.

In 1983, he moved to the United States and continued ballet in companies such as the Milwaukee Ballet, the Cincinnati Ballet, the Metropolitan Opera Ballet, and the Houston Ballet. It was in Houston where Stephen started painting and writing his own songs. His early paintings were minimal and abstract explorations. Relative to music, he grew up with traditional Australian/American country music and classic Australian/British rock. He was inspired by artists like AC/DC, The Angels, Johnny Cash, Hank Williams, Neil Young, the Beatles, David Bowie, and of course the great Australian Legend Slim Dusty. After hanging up his ballet shoes, Stephen moved to Hollywood, California to pursue a career in acting and music. During this time, he appeared on nine national commercials and fell back on his carpentry trade when times were tough, as acting proves to be. It was during this time that he dedicated a great amount of time to his music. In 2007, he released his debut album, “Broken Hill” which reflects the stories of his hometown, his family and his country. Co-produced by ALT country star Anne McCue, the album is true to his tradition of country music.

In late 2007, he recorded and released a duet with Australia’s Queen of Country Music – Tania Kernaghan – called “Let’s Fall In Love Again”. The song became number 8 Most Added Song to Australian Radio with more adds than artists such as Gwen Stefani, the Eagles and John Fogerty that same week. The duet debuted at number 3 on the Music Network Country Airplay Chart and remained in the Top 10 for over three months. In late 2009, Stephen followed up with his second album, “Restless Soul”. This album departed from traditional country adding alternative, blues, gospel and rock to the mix. Concurrent to this timeframe, Stephen continued to paint. He was inspired from some of the most renowned artists in Australia and even the world, such as Pro-Hart, Yayio Kusama, and Lindsay Kemp, who he was fortunate enough to work during his ballet career. These individuals and others certainly had a marked impression on Stephen’s aesthetic outlook. His style evolved to include work influenced by aboriginal dot art, leavened by the impression of the working-class culture imparted to him in Broken Hill, the hardscrabble mining town that formed his vision.

As the years went by, he focused more on painting and his work evolved to include abstract dot painting and what he calls his “Loose Dot” series, dynamic drip paintings reminiscent of Jackson Pollock’s painting technique. Stephen has been an artist for over twenty-five years and a successful selling artist for over the last fourteen years with his works spread internationally. Stephen works full-time as an artist in Los Angeles and continues to enjoy his journey.

Would you say it’s been a smooth road, and if not what are some of the biggest challenges you’ve faced along the way?
It definitely has not been a smooth road, there have been ups and downs. I have always had to be independent and self-reliant from an early age. Undoubtedly, the departure of my mother at the early age of six left a scar that I continue to mend each day. It is perhaps that pain that drives all of my creative passions in my continuous search for happiness.

Can you tell our readers more about what you do and what you think sets you apart from others?
I’ve been fortunate to have had many careers in the arts- professional ballet, acting, singing/songwriting and abstract painting. Currently, I have been focusing most of my time on my artwork. I have two prominent series of work, the dot ‘veil’ series and the ‘dripping’ dot series. Both series use vibrant colors and have a dynamic feel to them. I am particularly proud and honored to be an internationally selling artist. My work tends to be very large scale, abstract paintings each unique in their own right, which possibly could set me apart from most other artists.

In terms of your work and the industry, what are some of the changes you are expecting to see over the next five to ten years?
Your guess is as good as mine, ha! Truly, the art world is a unique and interesting platform. Certainly, in my time, I have seen the industry shift to online galleries, which still surprises me that people will buy work without seeing it in real life. Some artists have moved towards digital platforms to create their work. I don’t think that will ever be a technique that I will move towards because my work is so much about crafting it by hand. But never say never. 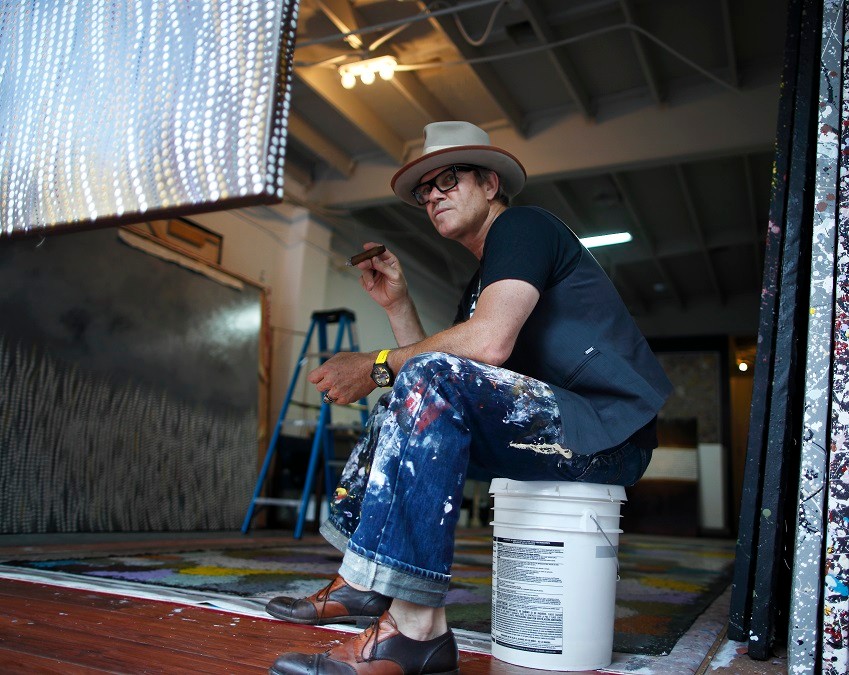 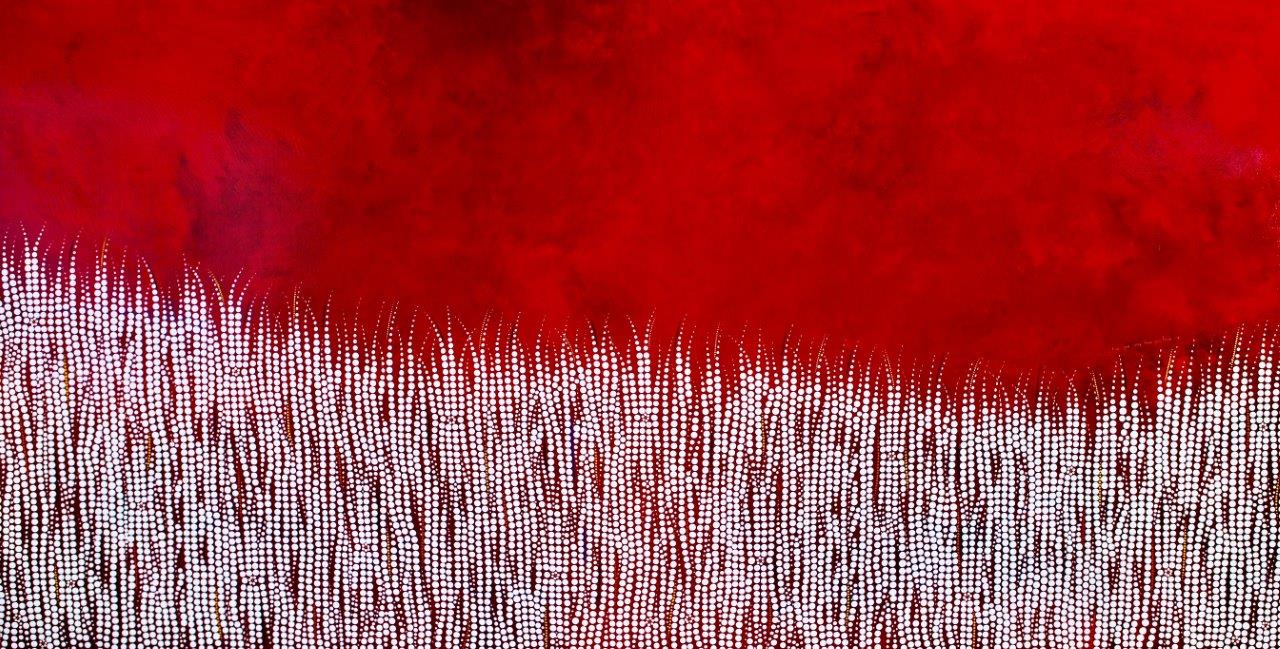 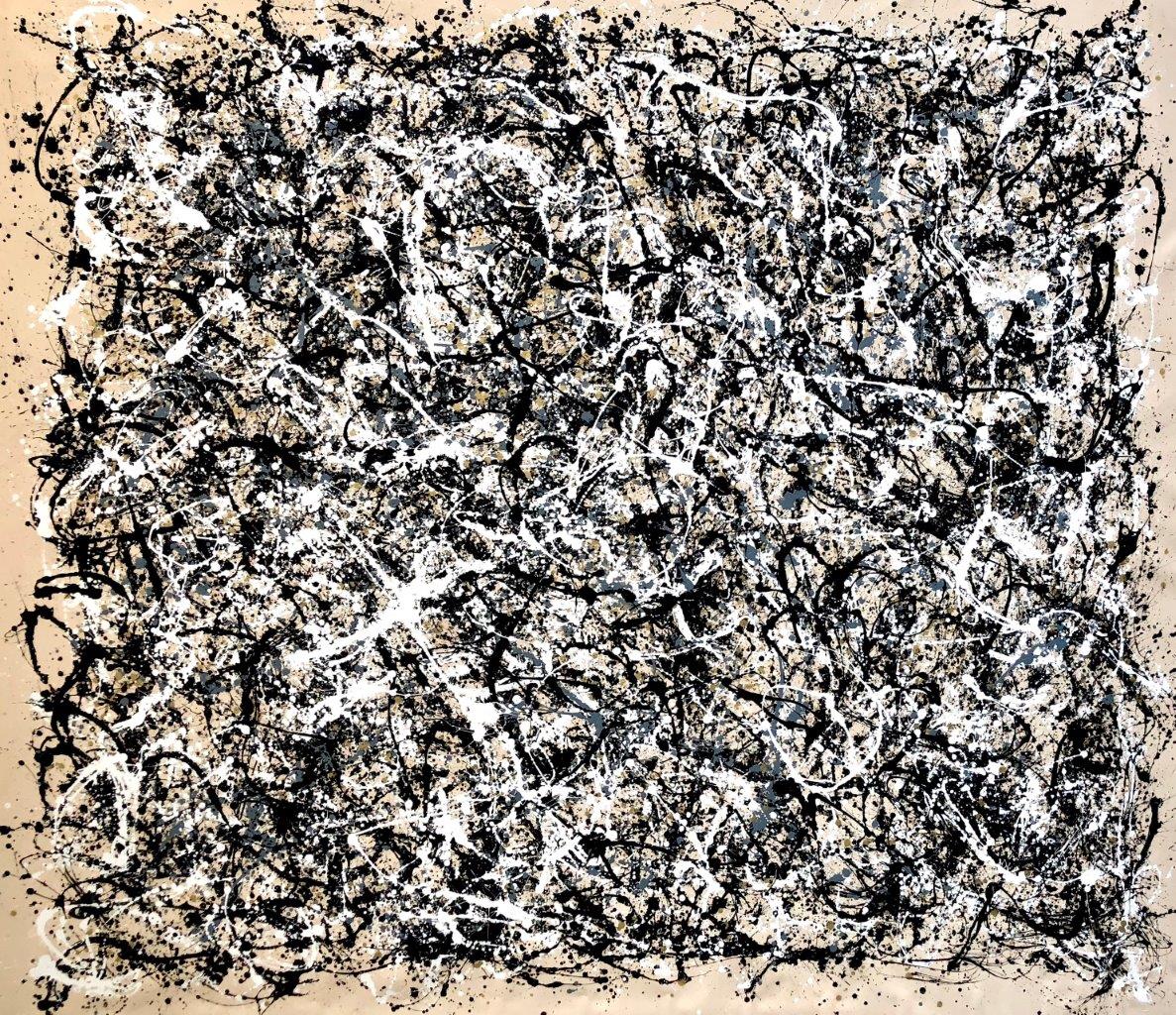 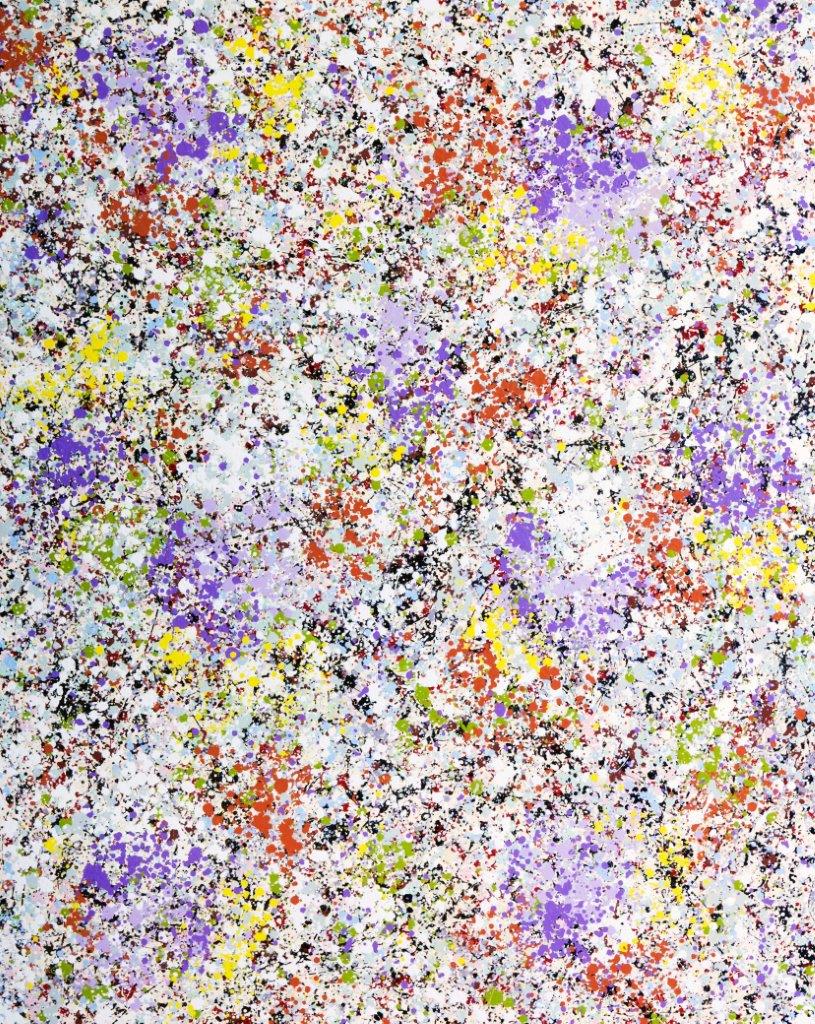 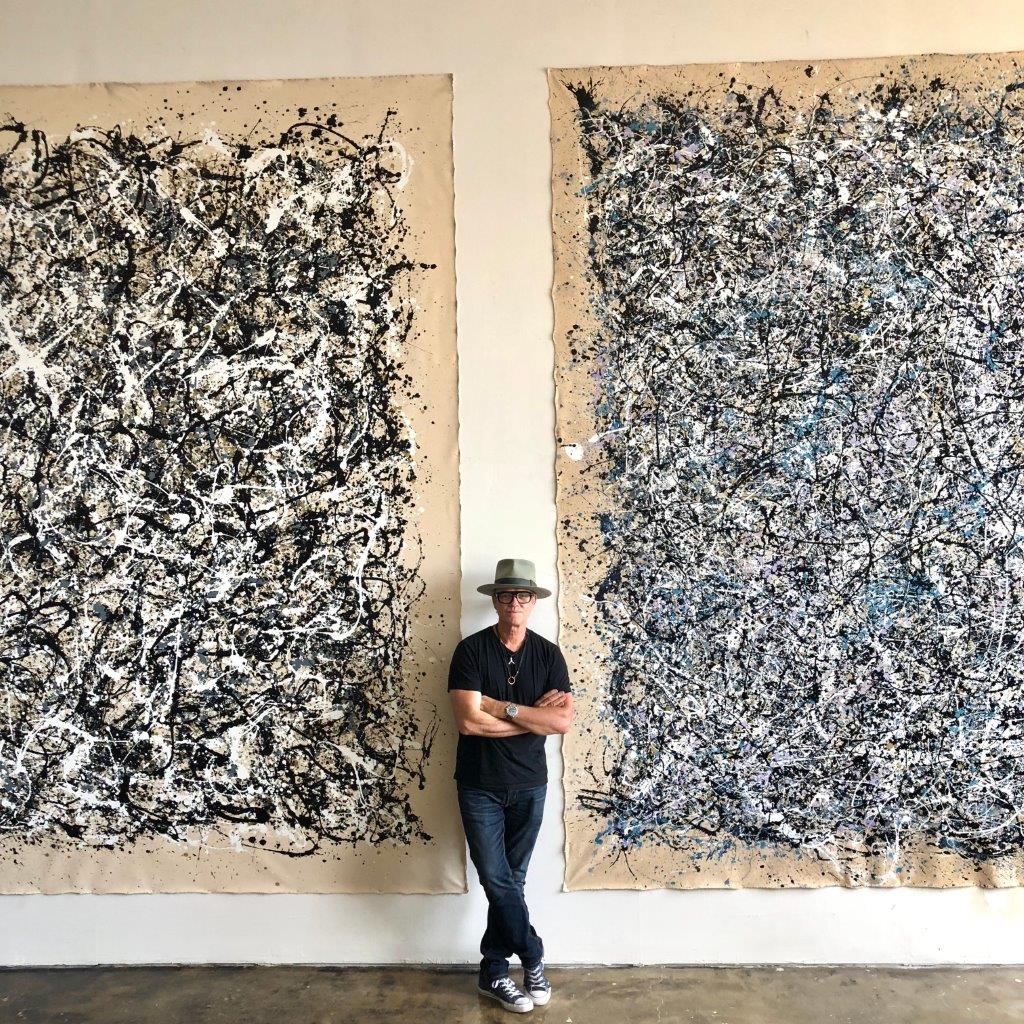