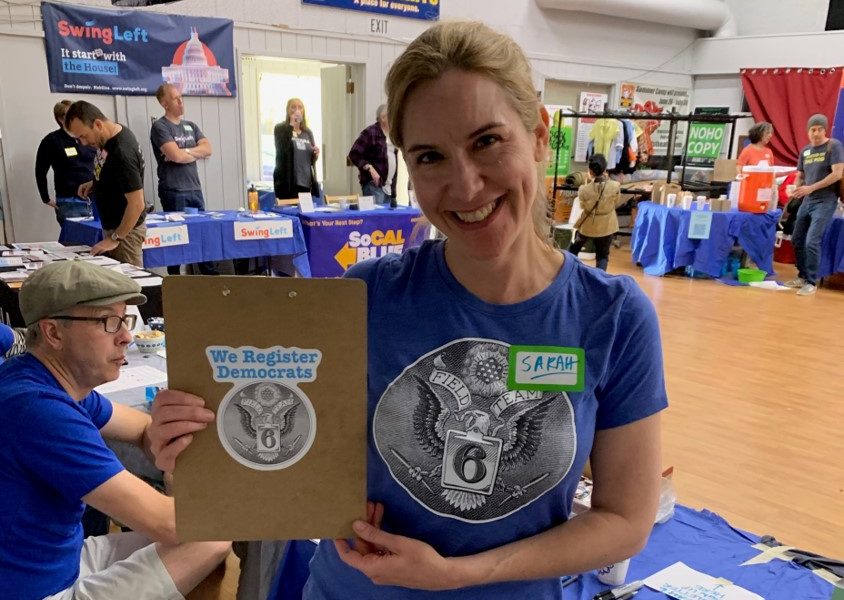 Today we’d like to introduce you to Sarah Jakle.

Sarah, please share your story with us. How did you get to where you are today?
At the time of the 2016 election, I was so sick I couldn’t get off the couch. After Trump was elected, I thought, “OK, now I HAVE TO GET UP.”

I started doing voter registration every week in Orange County (and Katie Hill’s district). Jason Berlin, at the time a California Democratic Field Organizer, developed a visionary new method of registering voters: Instead of saying:

“Would you like to help save the world from Trump?”

If they liked Trump, we had a lovely human moment and said “Thanks! Have a great day!” If they didn’t like Trump and wanted to change the direction of the country, we registered them to vote/volunteer. Using this method, a small army registered 6,000 specifically progressive voters and was integral in flipping the 5 Southern California swing districts to Blue Congress seats and taking back the House.

After the inspiring 2018 election, Jason started Field Team 6 to continue his successful methods and take them national – and asked me to be Outreach Director. So in two short years, I went from not being able to get off the couch to speaking on behalf of Field Team 6 all over to hundreds at a time!

We’re always bombarded by how great it is to pursue your passion, etc – but we’ve spoken with enough people to know that it’s not always easy. Overall, would you say things have been easy for you?
Honestly, in the beginning it was extremely difficult – I have psoriatic arthritis, which is quite a vicious autoimmune disease (where your body attacks itself). I knew I needed to get involved, but the prospect seemed overwhelming.

So I made a deal with myself: all I needed to do was get in the car and drive to the event. Then, if I wanted, I could go home. I just needed to physically put myself in the car and drive. I found that by breaking the effort into smaller steps, tasks that could seem overwhelming (registering people to vote) became possible.

Once I arrived, I got out and joined in. Eventually, I came to love registering voters. And now, of course, I am actually an Outreach Director.

I tell everyone: Activism is like jazz. It’s organic and super flexible; no one’s trying to be “perfect.” Take the pressure off and just do your best. Because the opposite of trying our best is not trying at all. And as our country bleeds out around us, not trying at all is no longer an option.

So just pick some action, such as going to fieldteam6.org or checking out a whole calendar of options in LA at socalblue.org, and think, “I’m just going to get myself in the car, and drive there.”

And then do not be surprised when you fall in love with the cathartic sense of taking action instead of scrolling through Facebook filled with helpless rage.

Please tell us about Field Team 6.
As someone who believes deeply that:

* Climate catastrophe is not only real but happening right now,
* That a woman’s reproductive choice is her own,
* That we have to take action on gun safety laws, and that
* Healthcare is a human right we should focus on expanding rather than taking away,

I want to spend my time registering people who believe in similar values. America is at too critical of a crisis point right now: I want to empower and amplify legislators that care about her citizens, not legislators passing huge tax cuts for the rich.

Therefore, I thrive with the Field Team 6 ability to register Democratic voters.

We always urge people to vote by mail, because there’s such a higher likelihood of voting (and it’s an insurance policy in case you are sick on Election Day) – and most of our 6,000 voters did just that. I don’t know if you remember, but Rep. Katie Porter and Rep. Gil Cisneros from OC first looked like they had lost their elections on the actual Election Day. However, over the next few days, vote by mail’s started rolling in, and both those legislators ended up winning. I remember calling Jason and saying, “Jason!! SOME OF THOSE ARE OUR PEOPLE!!” And I could not be prouder of the work those representatives are doing.

(For fun, YouTube “Katie Porter and Chase Bank” and enjoy!!)

Has luck played a meaningful role in your life and business?
My great-grandfather, Branch Rickey, said, “Luck is the residue of design.”

Meeting Jason and getting to be Outreach Director feels incredibly lucky – but it was possible because I showed up to voter registration events when my body told me I had no business doing so.

Being a part of a phenomenal and kick ass group of activists feels incredibly lucky – but it was possible because activism self-selects for passionate people who want to make the world a better place.

Taking back the House in 2018 feels incredibly lucky – but millions of people across this country postcarded, text banked, phone banked, canvassed and registered voters to make it possible.

I feel very optimistic for 2020 to be similarly lucky – but again because that luck will be the residue of millions of people creating the design. 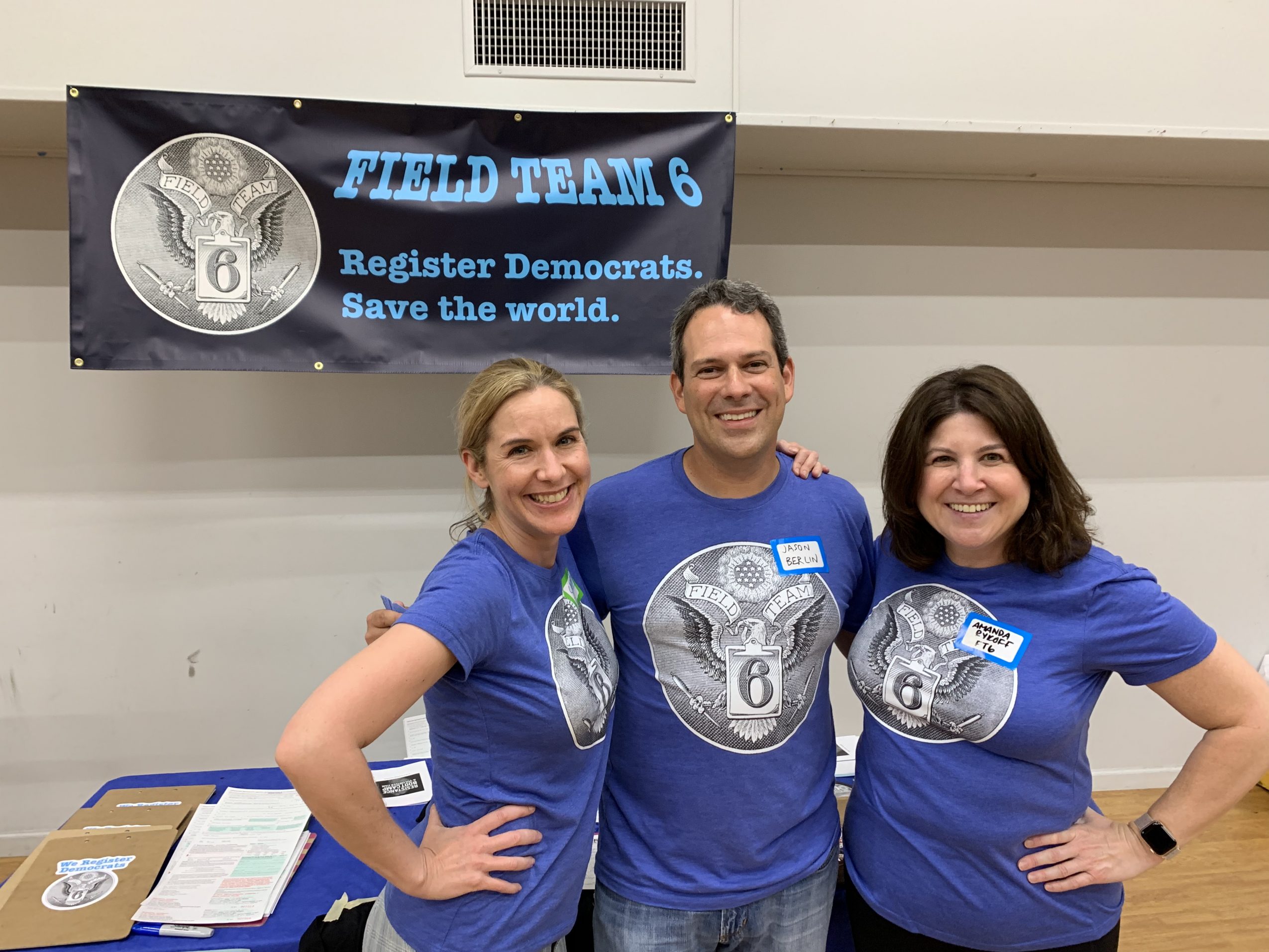 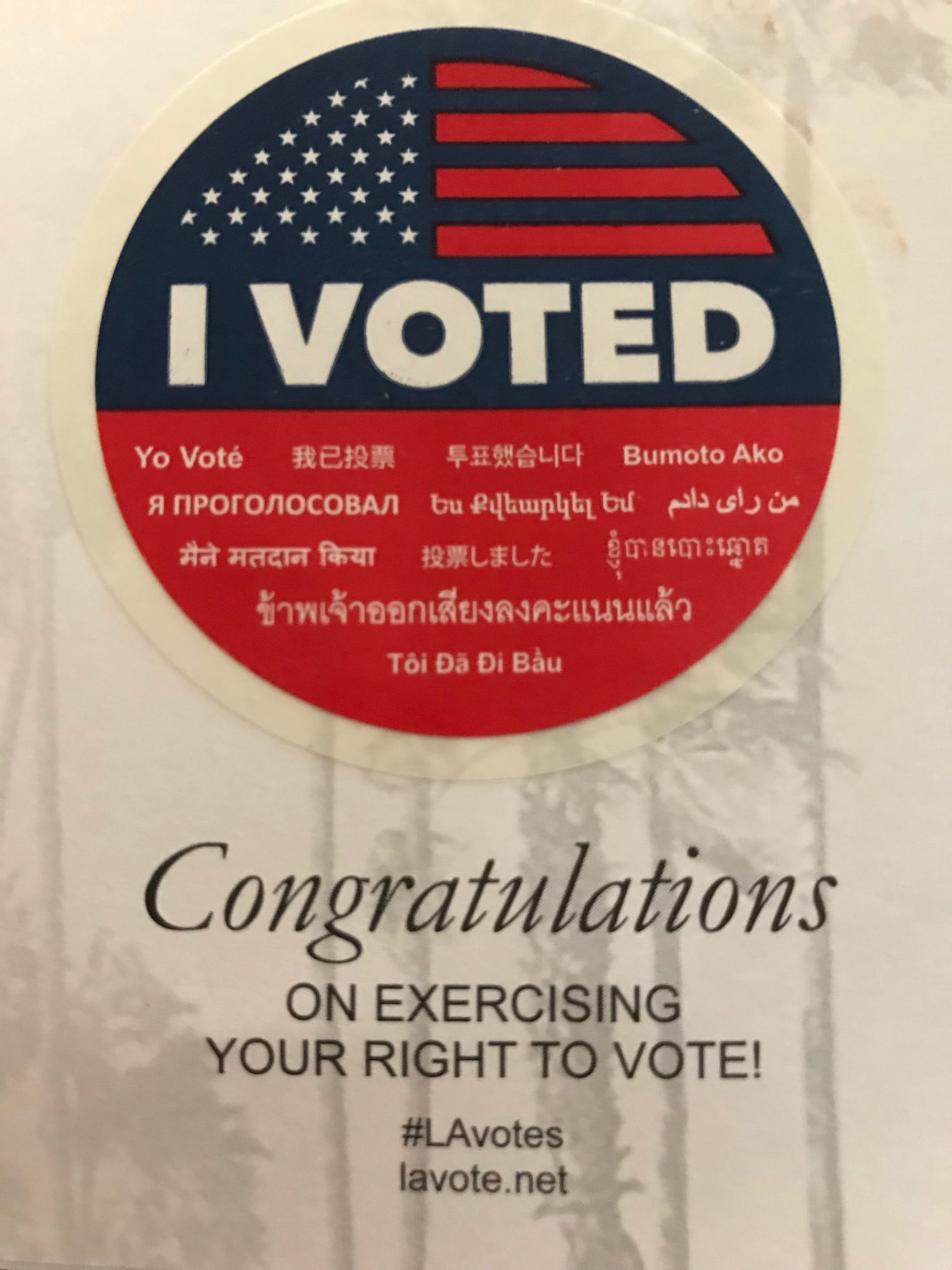 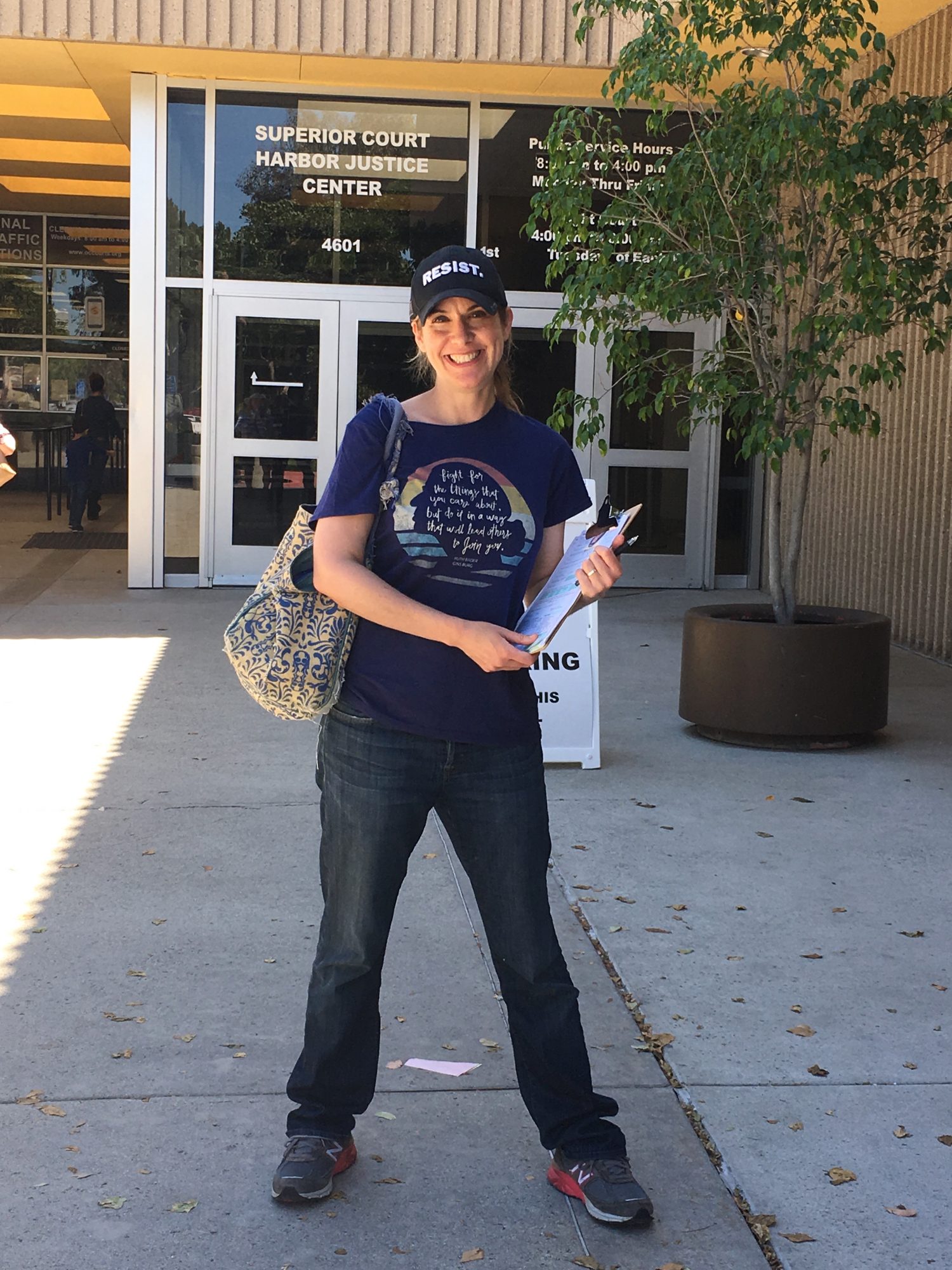 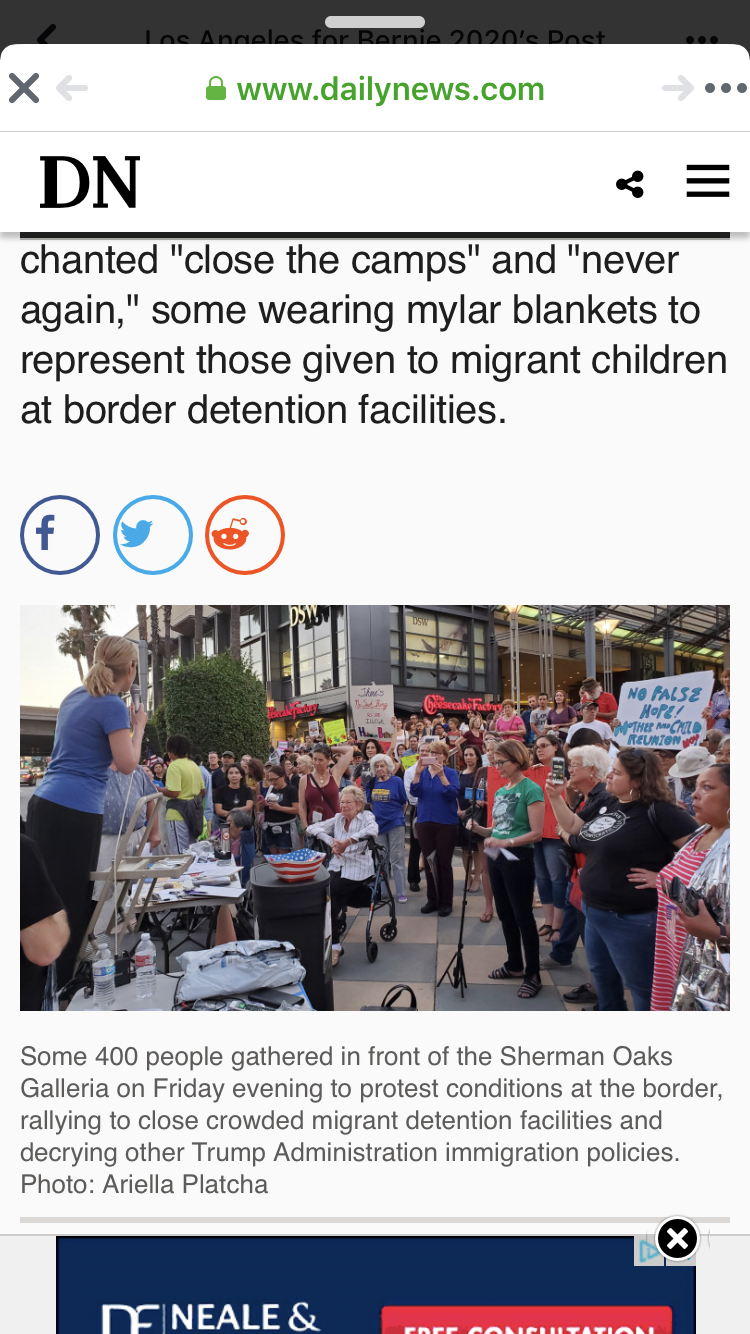 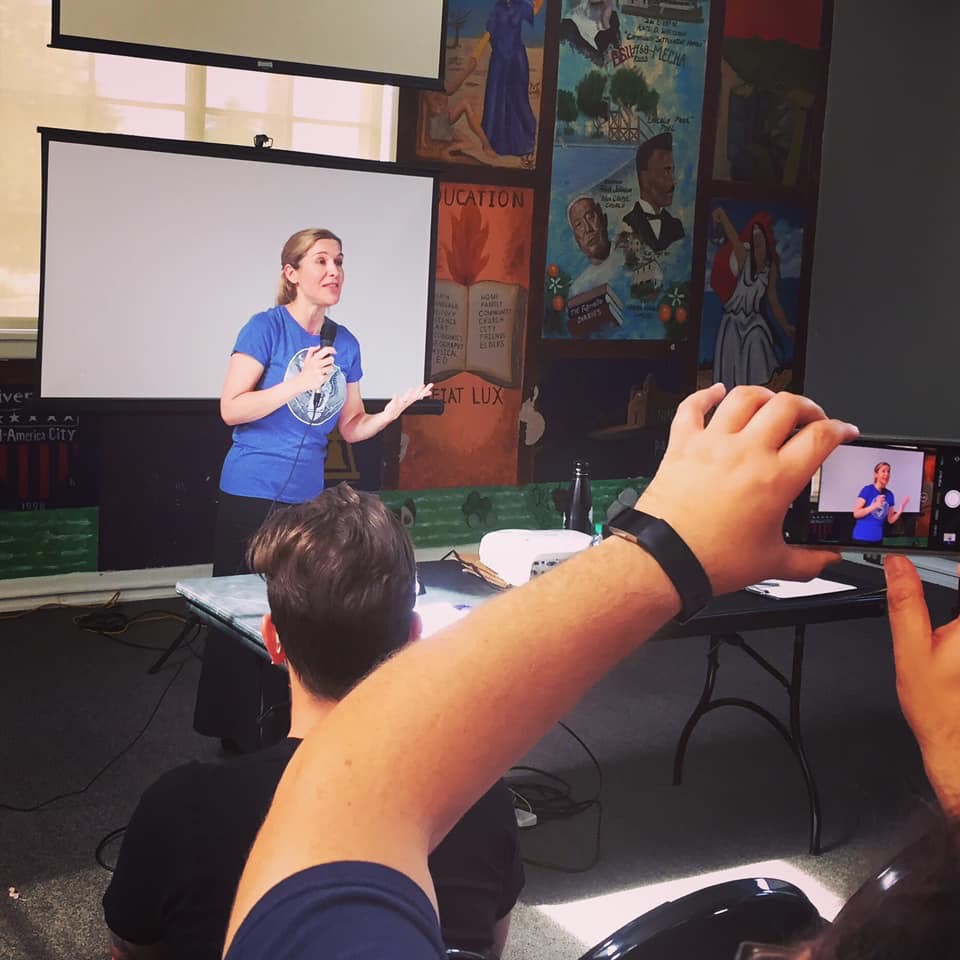 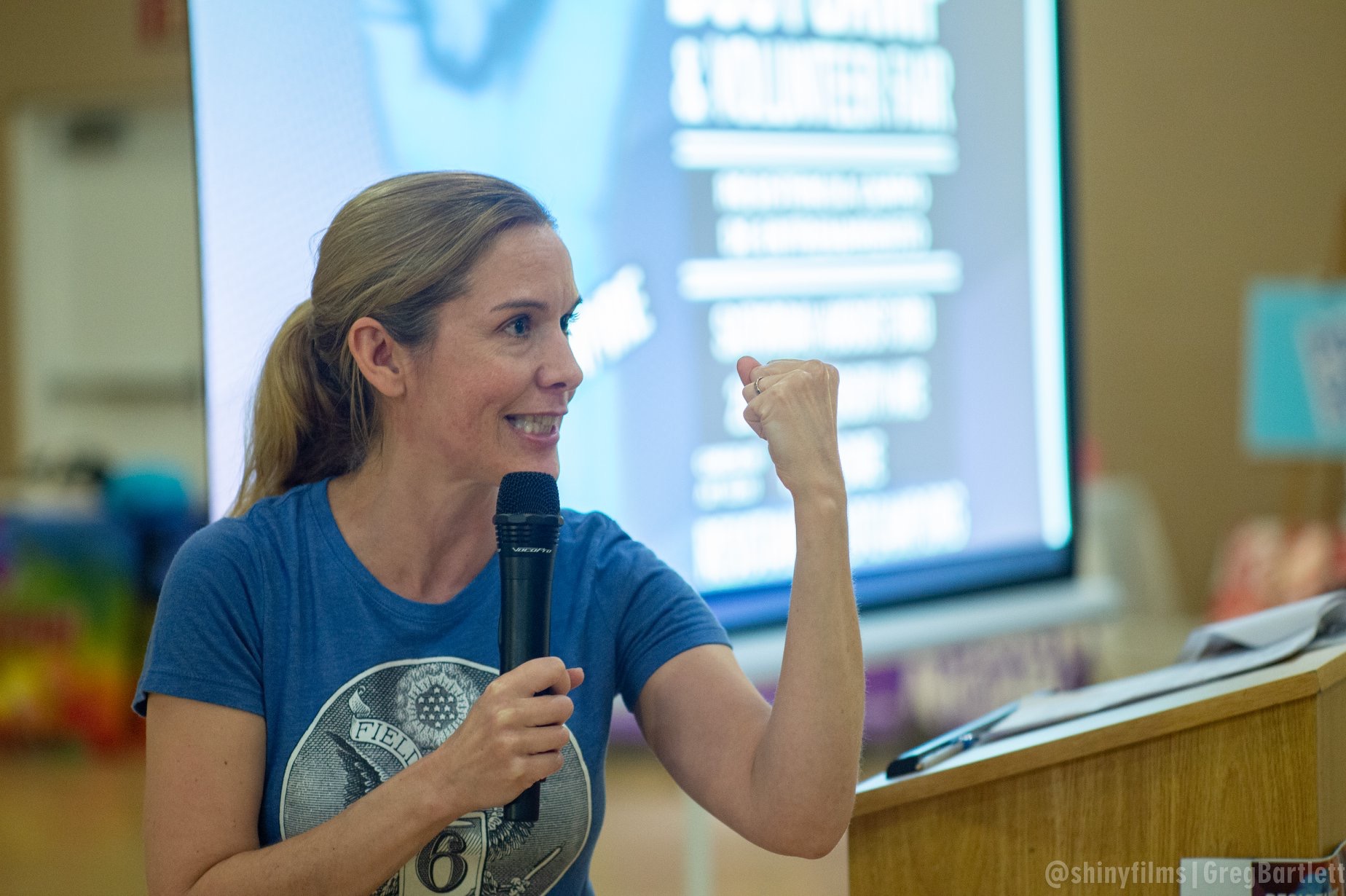