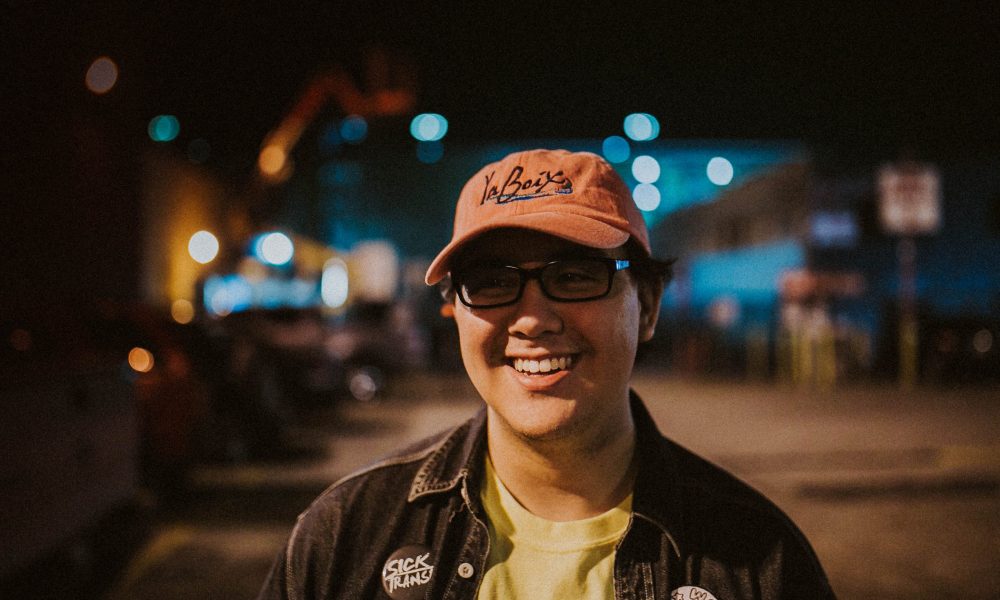 Today we’d like to introduce you to Sam Cranis.

Every artist has a unique story. Can you briefly walk us through yours?
Music has always been a part of my life. From my parents singing me classic rock songs of The Beatles to calm me down when I was a baby, to finding my own taste when I first discovered Green Day’s American Idiot as a little kid; I’ve always had my life revolve around it. At an early age, my parents threw different interests at me to help guide me towards a certain focus. After every type of sport, all kinds of educational studies, and the thousands of different art forms, I finally found love in playing an instrument. And once I found out that I didn’t have any patience for guitar, piano, or any wind instrument, my Dad suggested that I try playing drums, since that was an instrument he used to play. And that was it… that was the instrument I knew I wanted to intertwine into my identity.

It wasn’t until the end of elementary school however, that I started to take a more serious interest in learning drums. I finally started to take lessons and really focus on the nitty-gritty stuff; like practicing rudiments and using a metronome when practicing. And by the end of middle school, I was finally in my first band. Fast-forward through a couple of short-lived bands, and I ended up in my first serious band, Sick Transit; a band that I am so very proud of. From that point on, my life would truly dive into the world I’m apart of now, consisting of the local music scene, the friends I call family, and the daily struggles I go through to keep pushing myself into the direction I want my future to go in.

Please tell us about your involvement with the music scene.
My band Sick Transit was a Pop-Punk band. Something we were proud to be. When we were first starting out, we were the only Pop-Punk band within our scene, and we loved it. Personally, I just loved being able to make music that was goofy, energetic, and careless. Honestly… playing music, in general, was something I loved, and still do. It was the feeling of connecting with people, on and off stage, that really hooked me on it. However, during the time when Sick Transit was starting out, we were having trouble finding shows to play. And this is kind of where my life took a turn, and I came up with this idea for a show called Not-So Bummer Summer.

The original intention for this show was to just be a guaranteed show for my band to play during the summer. We somehow convinced our singer’s parents to let us have the show be in the backyard of their really nice house, and then we got some of our friends together to fill up a line up (and to be totally honest, the bands who played this show were the only other bands we were close enough with, at the time, to ask to play this show). We posted about it online to let people know it was a real thing, and that was that. And we didn’t expect that many people to come. At most, we figured maybe about 30 people. We advertised it as a house party/show with free entry, in hopes that that would encourage more people to come, and I guess it did because we ended up having 100 people come to this show. And we were shocked! We just didn’t expect that many people to come out. It was super wild!

From that point on, I took it upon myself to have Not-So Bummer Summer happen every year. And with every year we did it, more people started to come and show interest. The thing that excited me the most, and also gave me the motivation to keep making the show happen, was that I would see so many people that I usually didn’t see at a local show. People would come to this because it was an event that they were excited about. People who usually didn’t come out to local gigs would be coming out to this show, bring other people that they thought would have fun, and would do all this all while showing enthusiasm for bands they had never heard of before. So, with all these new faces coming every year (and regulars who I would always see at shows), I started to put myself out there more, and really make this event into something more than what it original was supposed to be. This is now kind of my new venture in the music world. I started to connect with more bands and artists that I thought were talented, and would be a great addition to the event, I’ve reached out to different brands and organizations that I thought shared the same ideas and vibes that NSBS had, and also finally decided to create a small team, consisting of some of my best friends, to help me every year make this bigger and better than the previous year. So now today, I take pride in having this once small house party/show, be a sort of “well-known” small music festival within the music scene I’m in.

And the whole point of NSBS these days is to promote local music… to get people excited about seeing a band that isn’t some well-known stadium selling group. I think it is so important to show people these talented, up and coming bands, that could be the next big thing. But they can’t make it as the next big thing without the people knowing about them. And so I hope to be of help and service in that regard, in making sure I can give bands a platform to showcase what they’ve got. Not only that, but I just love the idea of having an event that people can look forward to every Summer. Something that people can come to, reconnect with friends or meet new people, and listen to some live bands. I want NSBS to be an idea. Something that everyone can get behind. No biases. No exclusivity. Just having fun and promoting the love of music and art.

What do you think is the biggest challenge facing artists today?
I think the biggest challenge for artists coming up today is… well I think there are two things. First of all, I think there is a HUGE obstacle to finding places to play. There are some staples here in Los Angeles that have been around for a while that local artists rise from such as The Smell, but I think there needs to be more accessible venues for smaller artists to play at. I often hear from people that bands should just ask to play venues like The Roxy, The Whiskey A Go Go, or anything else on the Sunset Strip; but those venues are completely out of reach for bands just starting out. Venues like those only care about money these days and will contact young bands with great news of giving them the opportunity to play at their venue… but that they need to sell like 50 tickets that are $25 each (AKA Pay to Play; the lamest rip off ever). So, I think it’s a huge challenge to have venues that are willing to have young bands play at their establishment and not have them pay-out such outlandish amounts of money just to get their gears started as a band. And keep in mind, every band will always be starting out and will only have about 5-10 people who will come out to see them during their first few shows.

Another challenge I see, outside of getting started as a new band, is figuring out the next step after getting some traction. I’ve faced this challenge (and still do) and work with several bands who have as well. A lot of bands will start to see a lot of people coming out to their shows… but it’s the same handful of people at every show. They’ll see that they have good traction online with social media, but it doesn’t show at the shows they play when all those 300 people who liked their recent post stay home and just wish them good luck and will “catch them next time”. It’s a confusing and annoying problem that even I don’t have an answer for, in terms of a solution. Like a band could be doing everything right: playing shows constantly, putting out great songs, making amazing music videos, keeping up to date on social media, but they don’t know what to do next once finally getting into that groove. And I guess I want to help a little with that with NSBS. I know it’s not a lot, but I hope to have NSBS be a source of new fans and exposure for the bands who play the event and having us be some support in their path to success.

How or where can people see your work? How can people support your work?
In terms of the music I made with Sick Transit, all of our music is online on all streaming services (Spotify, Apple Music, Tidal, iTunes, Youtube), and even Bandcamp and Soundcloud (for those who rock that way). But for Not-So Bummer Summer, we’re mainly active on social media (primarily Instagram @nsbsfest). We do, however, have our own website (www.nsbsfest.com), that we are working towards having been our main central hub for everything. Eventually, I hope to have that be a place where people can check out past events, bands we’ve worked with, photographers we’ve worked with, and ideas we’re working on for bigger pictures in the future. But for now, it’s a nice site to look back on our past years and keep up to date with the bands who have played in the past. (Shout out to my teammate, Ari May, for helping me build the site!)

If one is able to, I highly recommend coming out to one of our events. We always post about them on our social media, and I think it is a really great way to find out about new bands who are incredible. And if you can’t make it out to any of our shows, try to come out to ANY other local artist show. I still consider that supporting us because by you coming out to one of those artists’ shows, you may end up loving them, supporting them, and then maybe, eventually, coming to see them at one of our shows. It’s all in the same world, and as long as people are coming out to see local music, I’m happy. 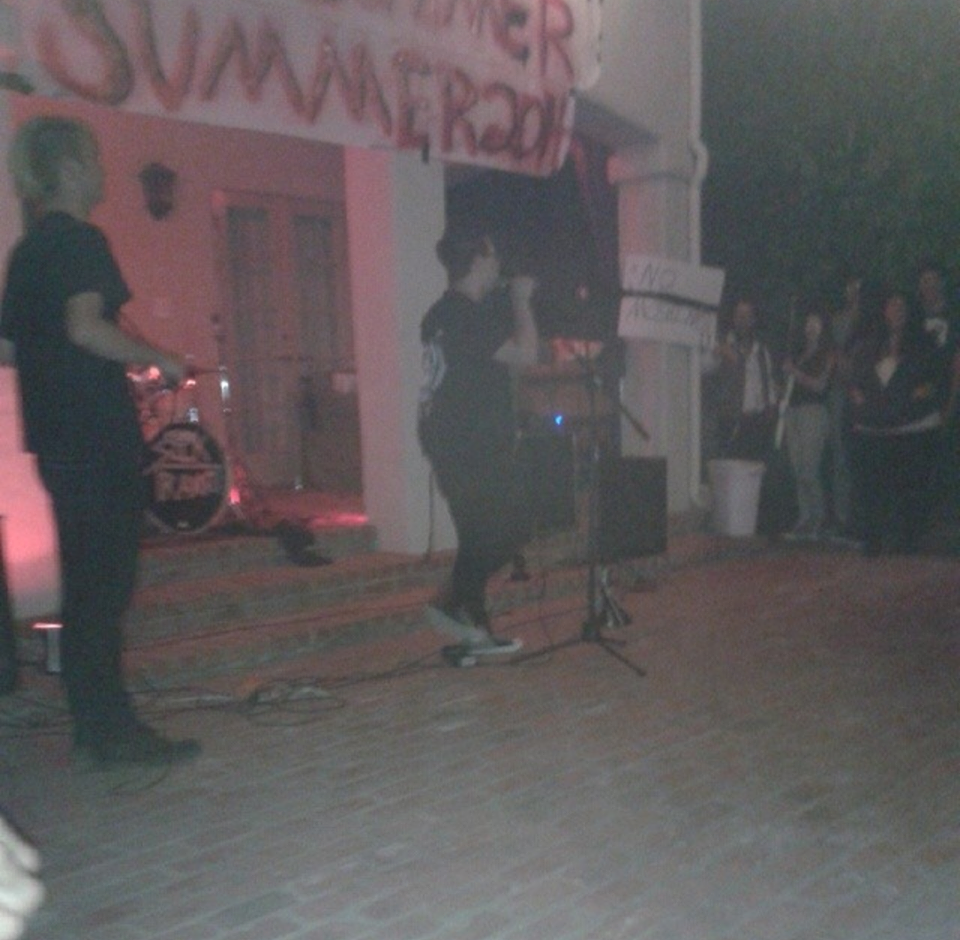 Sam talking to the crowd before Sick Transit plays the first Not-So Bummer Summer in 014, back when it was only supposed to be a one-off house show/party in Mid-Wilshire. (Photo by Brandon Sonza) 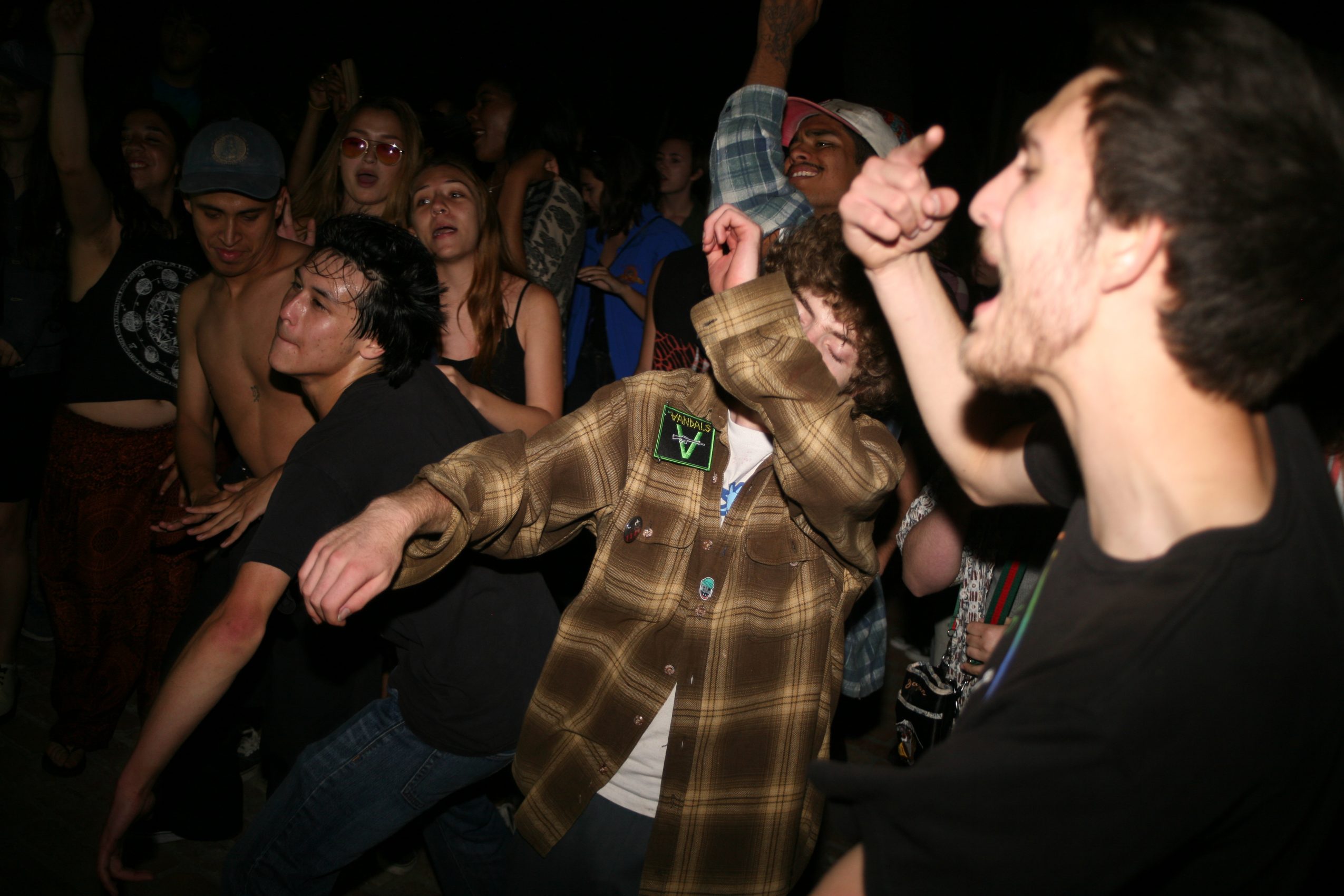 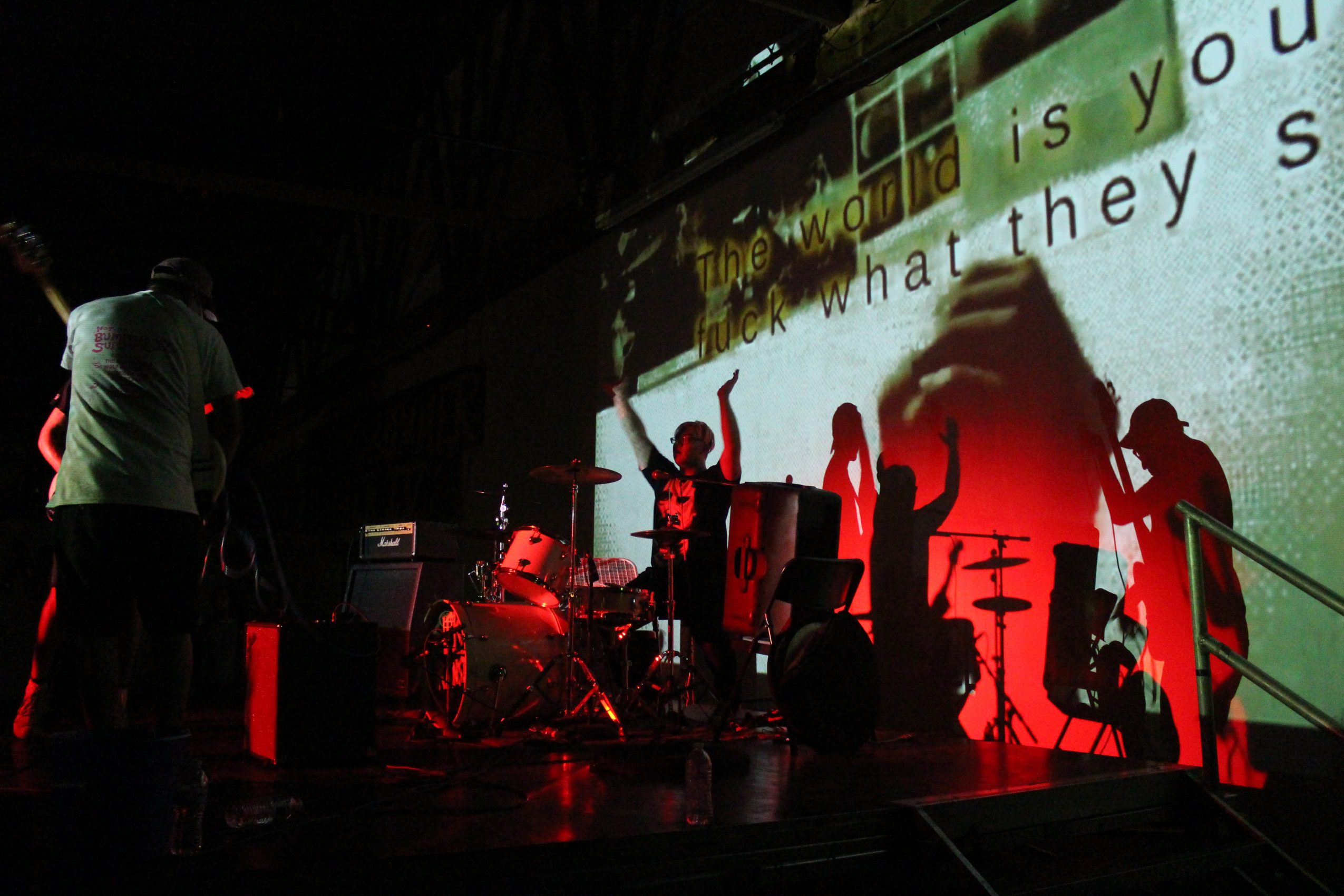 Sick Transit getting on stage at Not-So Bummer 2017 – Sam hyping up the crowd. (Photo by Sam Lane) 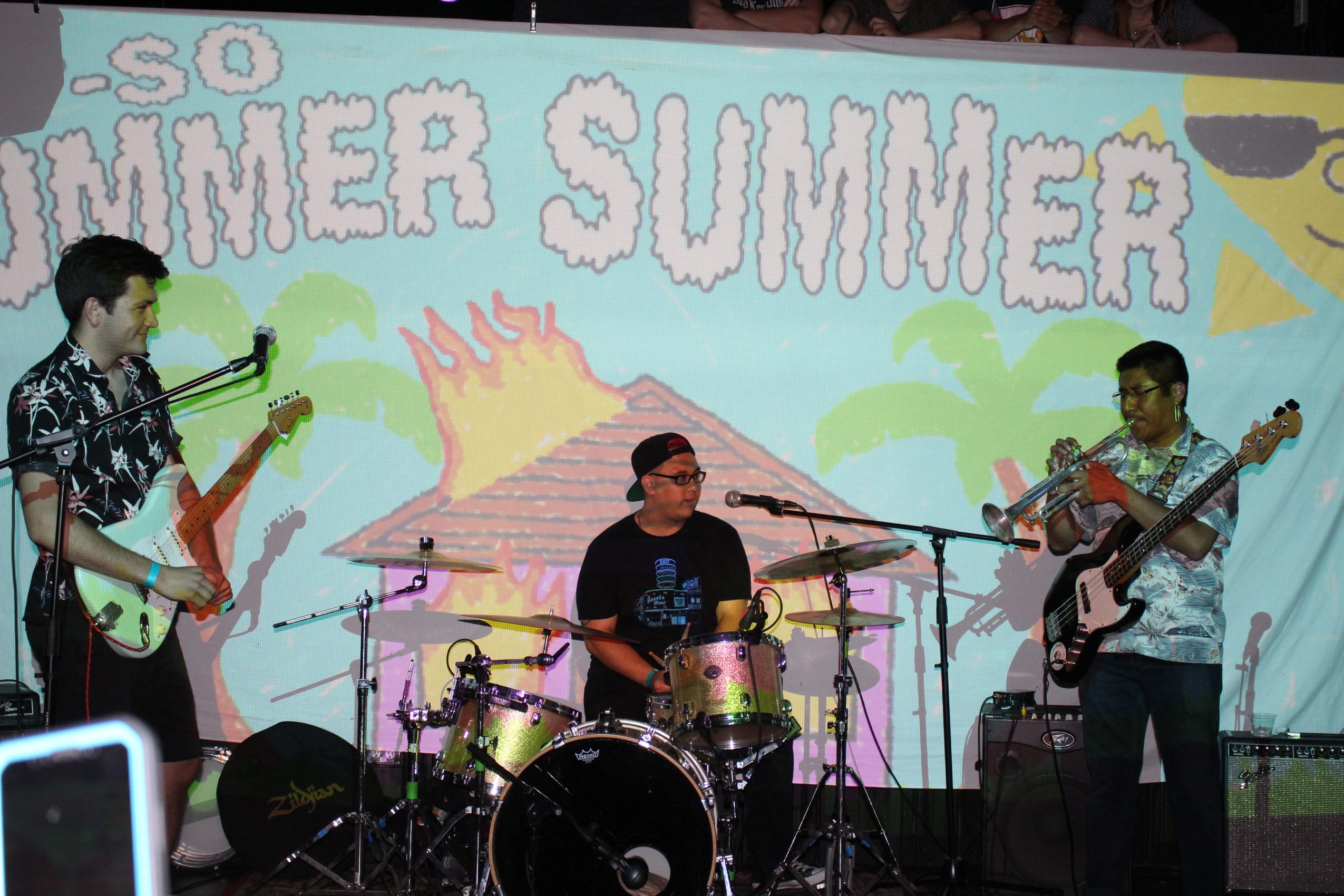 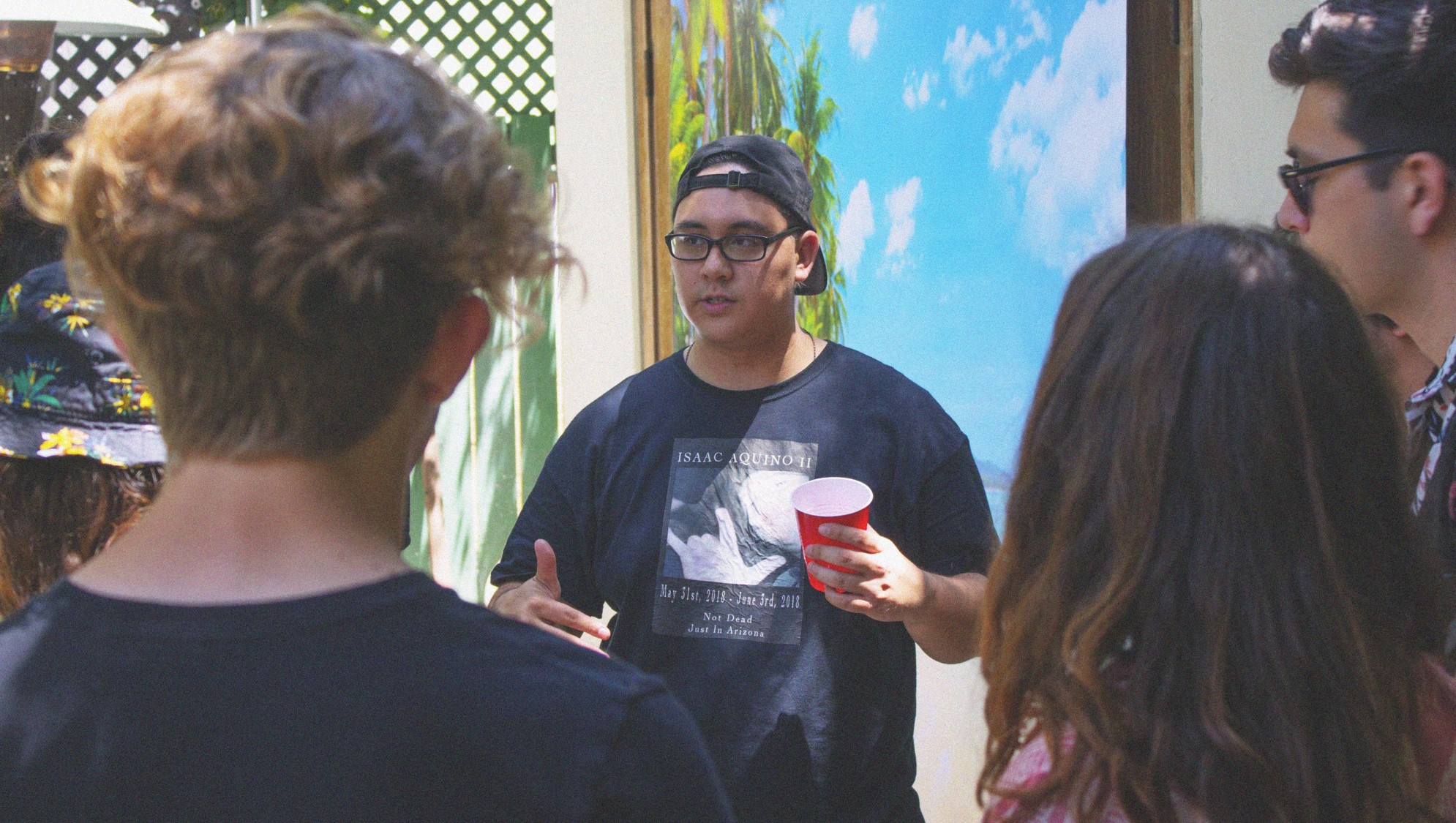 Sam directing everyone during the photoshoot of NSBS 5 2018 letting them know what’s going to happen and what everyone should be doing. (Photo by Sam Lane) 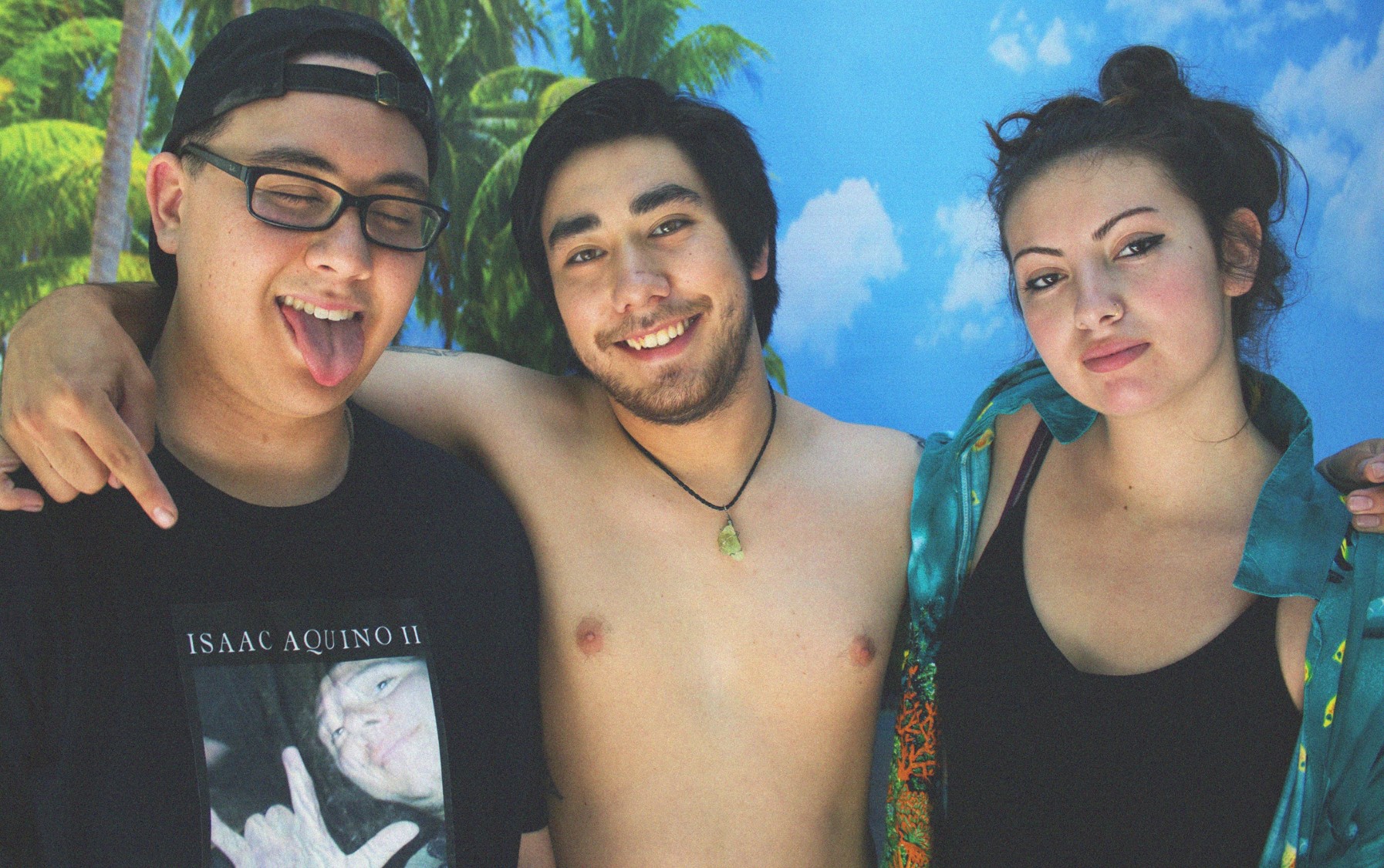 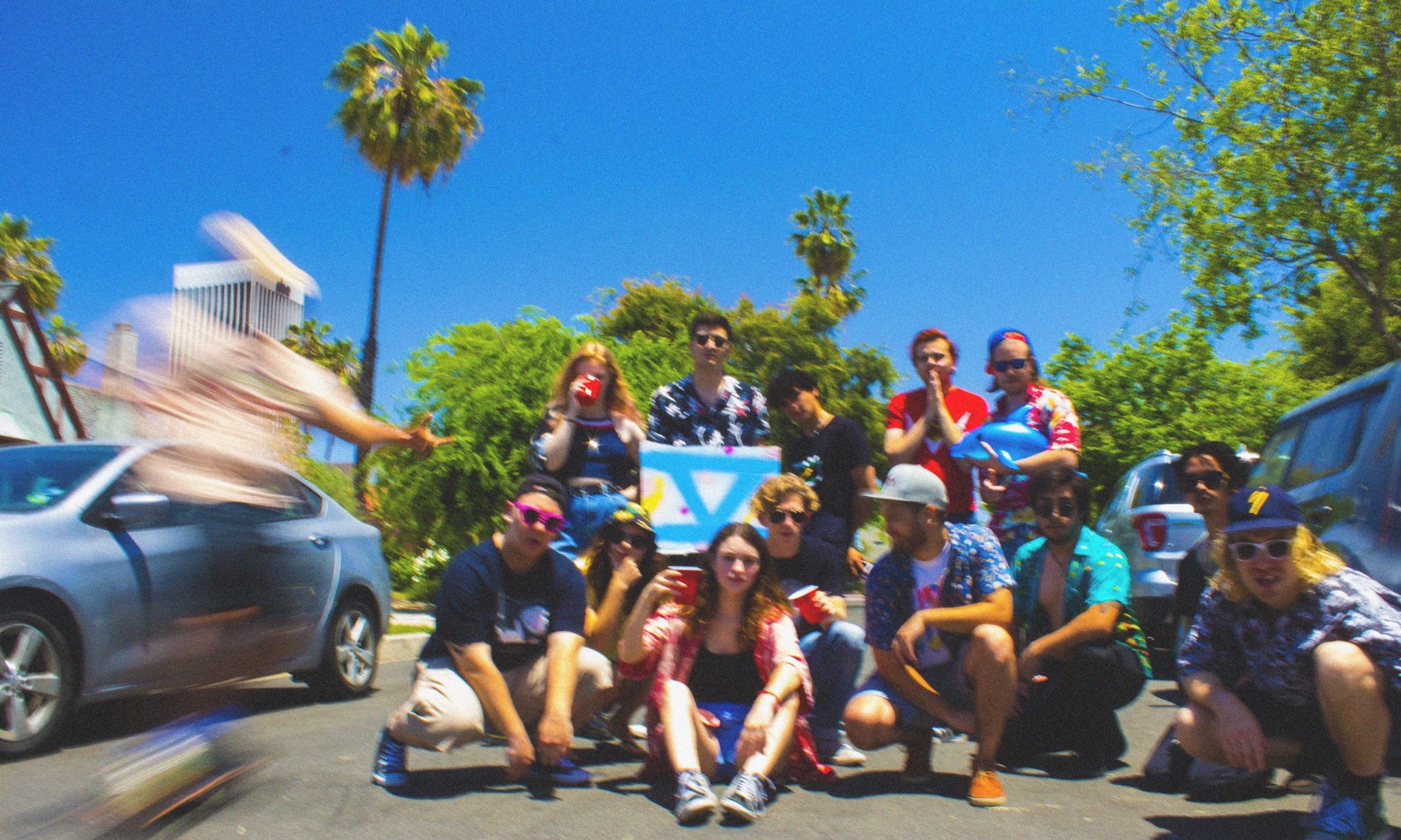