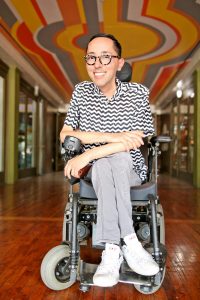 Today we’d like to introduce you to Raul Pizarro.

Raul, can you briefly walk us through your story – how you started and how you got to where you are today.
I was born in Mexicali, Mexico, but raised in Southern California from infancy. When I was about four, my parents began keeping me at home because kids in kindergarten would push me to the ground. For most, getting up would have been expected and normal, but for me the ability to stand back up was incredibly difficult.

That was around the time I was diagnosed with muscular dystrophy which weakens all of the body’s muscles over time. However, another attempt was made to keep me in school. I attended a different kindergarten, but this time the obstacle I encountered was language. I had language; but wasn’t able to communicate with others because I only spoke Spanish. The teacher took me aside, gave me finger paints and paper to keep me busy while the others learned their alphabet and colors. I started drawing bears playing in playgrounds and sharing those drawings with the other kids. They understood I also enjoyed the same things they did. This was the first time I felt connected to others. In those moments art became my clearest, most effective language, and it continues to be my preferred lenguaje. It is where I feel the most emotionally brave and honest. It is where I am more than my body. This is my journey.

In 1979 a group of artists, musicians, poets, and actors needed a space in the Pomona Valley to create and founded the dA Studio that soon became dA Gallery to be open to the public. These artists discovered that there were no art programs for the 150,000+ households in Pomona, and so in 1984 they applied for and were granted not-for-profit status, becoming what is today known as the dA Center for the Arts. For decades, the dA was a hub of activity for local artists with community-based programs. Highlights from the dA’s past decades include a collaboration with Claremont Graduate University and the City of Pomona Library to secure funding from the National Endowment for the Arts to launch a Chalk Festival in conjunction with “Big Read” that is now in its 12th year and a collaborative public art mural in 2004 called “Envision the Future” with Judy Chicago and Cal Poly Pomona.

In the last five years, the dA has made a concerted effort to engage the community to provide a more accessible, inclusive, and equitable arts center that reflects their culture. The dA presents over fifteen educational exhibitions annually with engaging programs. The art exhibits range from local youth to internationally renowned artists. In 2016, the 15th d’Aztlan: A Sense of Place was part of the Getty’s Pacific Standard Time LA/LA – a celebration of the contributions of Latinx artists to our culture. dA offered over thirty free programs in art, music, literature, food, and theatre in English and Spanish for all ages. The number of Pomona residents discovering the dA increased as did the awareness of the dA within the community.

From 2014-to present, the dA’s class offerings have grown from 3 to 30. Studio art classes include life drawing, drawing, painting, clay, silkscreening, and printmaking for all levels. Music lessons in violin, voice – songs of social justice, and youth mariachi as well as a spectrum of musical concerts are available and affordable for all ages. In 2014, the dA revitalized and expanded their literary and theater programs, including the San Gabriel Valley Literary Society, a Young Writers Contest, Mic and Dim, and in-house and local theater productions. Other offerings include Art and Theatre Labs for Adults with special needs, a community Quinceañera, an LGBTQ Prom, Autism Creates, Dear Imagination – an art, theatre, and activism program for youth, and the Locals & Legends outreach program highlighting local artists who introduce their own work and present a famous artist who inspired them.

Overall, has it been relatively smooth? If not, what were some of the struggles along the way?
Belonging and in/visibility have always been at the forefront of my experience. My work emerged from a little brown boy who withdrew into himself thinking he didn’t belong. A boy who feared glances, stares, touch, the occasional stranger asking to pray for him – all reminders his body was flawed, not normal, like them.

However, my work also tells the story of the unraveling of those fears, an evolving understanding of what I began to leave behind and what I had yet to face. The pieces also speak to the people who conversed with me, cared for me, saw me and not solely my body; small moments of normalcy that made me feel human.

When I began painting, my work was highly stylized and abstract, especially as influenced by Dali. However, as I got older and began to explore who I was outside the ideals of the church I was raised in; ideals that had always told me who I should be. Not only did I have to work through the indoctrination that did not allow me live fully – without a mask – but I also had to fill the void left once I left the church.

After my initial work before 20, I stopped painting for a couple of years. Painting set in motion something I feared, a fleeting self-awareness. During this time, I was still able to walk although with much difficulty. I have muscular dystrophy which is a progressive disorder that weakens the body year after year. Many physical injuries followed; falling often on arms that weren’t strong enough to lift and shield my head. I learned there was no way to fix my condition.

My whole life I had feared needing a wheelchair. I had been conditioned to believe it meant I was giving up. But when my body could no longer sustain me, allow me to walk, I had no choice, and through painting was able to embrace the mobility and freedom a wheelchair provided.

Since muscular dystrophy is progressive, there were always moments that challenged identity – what living in a body like mine meant to me and to society, and where the divide lived. Whenever I stepped outside my “home”, I was reminded that I am other, broken somehow. It was this type of conditioning and concrete truths that were slowly dismantled; each painting a new sort of self-enforced, painful, and brutal self-awareness.

In the last several years, my work shifted following the birth of my nephew. He was the first little person to wait for me to feed him. For the first time, I could help someone the way others had helped me. My nephew was nonverbal the first three years of his life. Every morning he would come over and wait for me on a little bench in front of my house, eager to be fed candy and for pictures to be drawn for him. In an attempt to help him start speaking, I would ask him what he wanted me to draw. His requests were usually bears going noni (sleeping) or elephants reading books. As he started to flourish, a new awakening inside of me did too. His voice bloomed and so did mine. The bears and other animals I had been creating were challenging my own beliefs about life. I realized how much of my life I had been an observer, not fully present. However, the simple joy of being in my nephew’s presence, seeing him combine colors and birth new ones, or discovering the scents of flowers in my garden, redefined the meaning of joy and love.

The sole image of my work included in this submission is the Greatest Acceptance, painted during a difficult time when my health began to deteriorate rapidly. It speaks to the fear of letting go, and the hope that those I love dearly don’t forget how much they are loved. This piece is predominantly about acceptance, and the aspiration that the love we invest in little hearts is enough to keep hope alive inside them.

Please tell us more about your art.
I’m an artist. I create paintings, sculptures, and lately even dolls. It all happens in my small studio in Montclair, CA. I put much of what I create for sale, and the pieces I want to keep, in particular paintings, I try to make prints and sell those. I sell online (website, Etsy, Facebook, Instagram) or at festivals, especially Day of the Dead festivals all over LA County. In some communities, I am known for my day of the dead work. My company is composed of me, and a scrappy but effective crew composed of my family and a few friends.

I think what sets me apart, if you think it about it that way, is that I paint at the intersections of my experience…I paint my journey.

If you had to go back in time and start over, would you have done anything differently?
It’s difficult to say…I am who I am because of my path, but possibly, I would have committed to my path sooner. I’m going to think about this one. 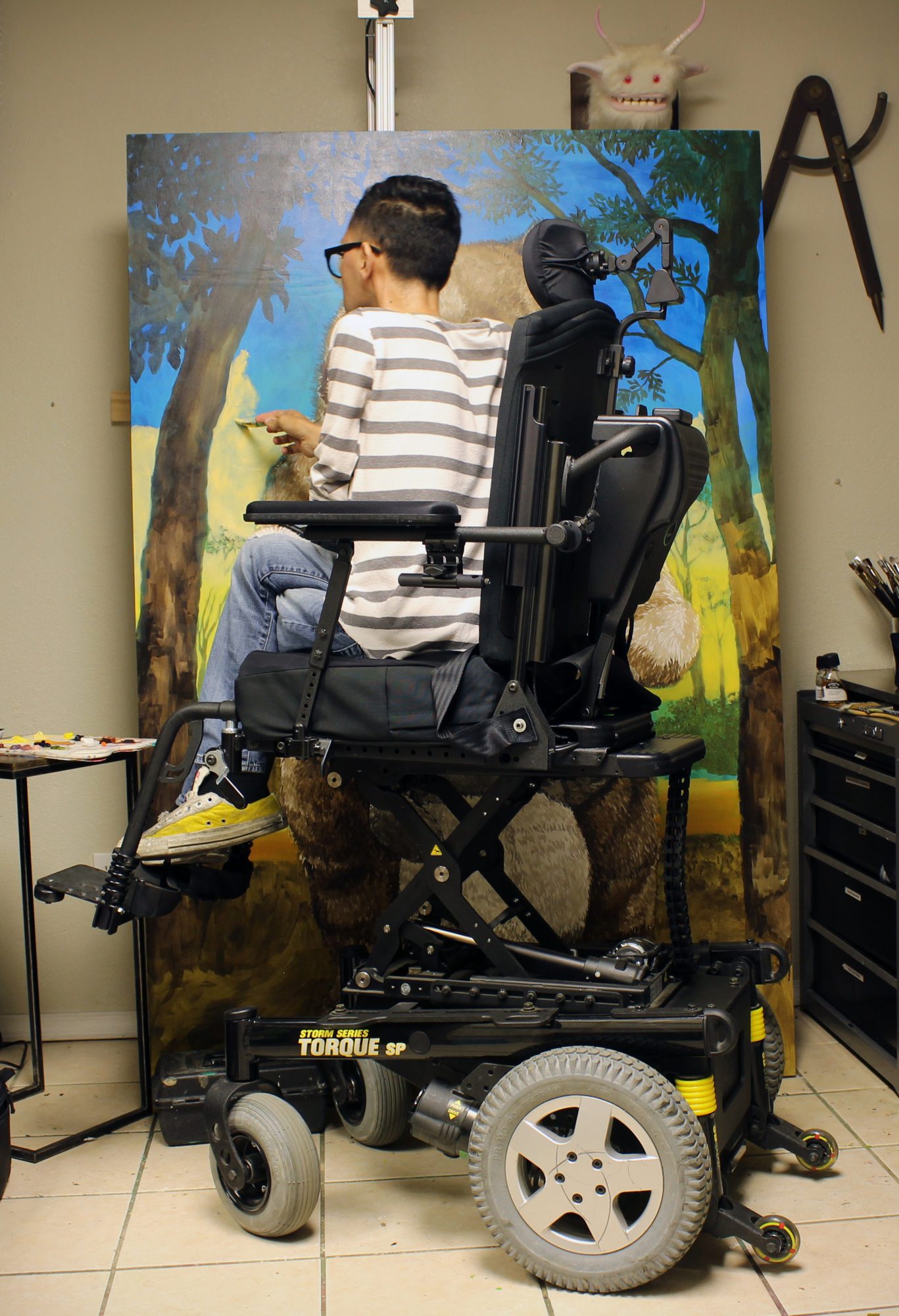 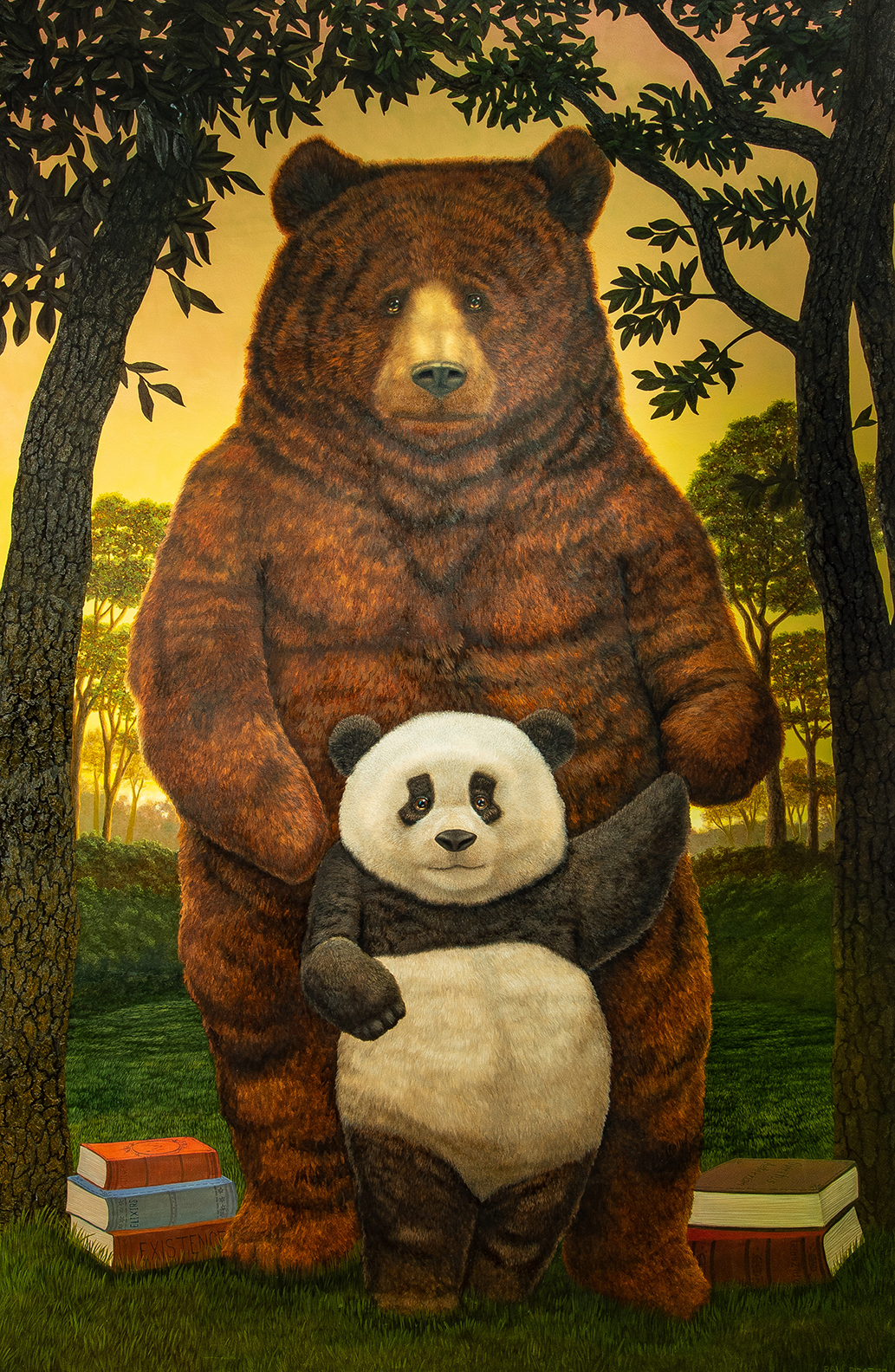 Image Credit:
Andy McKracken – Photo of me in chair, facing forward, with orange and yellow background