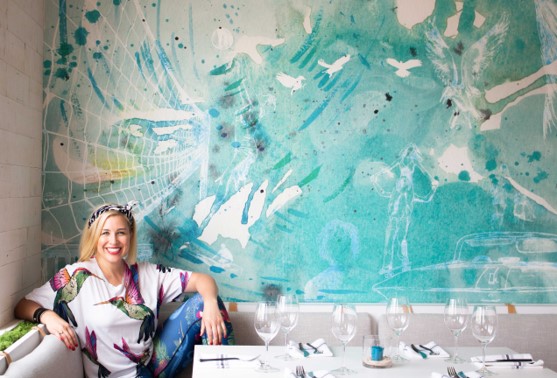 Today we’d like to introduce you to Katie Brightside.

Welcome to the Brightside is a creation of Katie with a client list spanning the globe. Brightside and her team create unique creative projects from murals and wallpapers to maps and branding collateral for hotels, bars, cafés, restaurants, and galleries.

With 20 years of experience as an artist and designer. Brightside is highly regarded within the creative field.

Graduating with a BA (Hons) in Fashion at Kingston University, UK, 2001, Brightside moved to Treviso, Italy, where she worked as a designer. In 2002, she relocated to Sydney, Australia. A great believer in education and wanting to hone her craft, she undertook an MA in Fine Art at Central Saint Martins (CSM), London, graduating June 2014.

After graduation, Brightside moved to LA and began her art and design agency Welcome to the Brightside. The agency collaborates with a melting pot of creatives in all spectrum’s of the arts to deliver unique projects on a concept to concept bases. The imagination shows no limit.

In 2017, Brightside launched her first book, A Modern Moral, which introduced large-format works to a new audience. Brightside appropriated morals are taken from traditional fables, such as Red Riding Hood, The Three Little Pigs and the Greek mythological creature Atargatis. These stories, illustrated as mural artworks are created specifically for each client brief to create a unique modern adaptation.

From the success of her first book. A new coloring book will be launch in late 2018. Brightside also had an extensive clothing range including elaborate show-stopping illustrated yoga pants.

Currently named as the Kimpton La Peer Hotel Artist in Residence and the creative director to Executive Chef Jason Fullilove over-arcing company Ethereal Palate LLC which according to Eater in 2017, Fullilove’s successful Barbara Jean LA pop up restaurant is currently on the top 10 list of best brunch in LA.

Overall, has it been relatively smooth? If not, what were some of the struggles along the way?
Define smooth road. Everything is as smooth or rocky as you make it.

Let’s jump back in time. Born in Swindon, Wiltshire, UK to an engineer and an accountant. Brightside left home at 18 to study fashion. It was in the second year of her BA did she got noticed by the United Colours of Benetton. Immediately after graduating, Brightside got a job with Benetton and moved to Italy.

‘I have to admit it was a wonderful experience however I struggled moving up in the company, I felt I was losing time learning a language when all I wanted to do was improve as a designer.’ It wasn’t long before Brightside decided to move to Australia, where she immediately after 10 days of arrival, walked into a job as a freelance designer for Akira Isogawa. She became a citizen and settled down and bought her first apartment.

In 2012 after a very successful solo art show; with 1000 people attending opening night at the aMBUSH Gallery, Waterloo, Sydney, with the ever-so-itchy-feet, Brightside moved back to the UK with a plan to attend art school. Lucky she got in as there was no backup plan. She graduated Central Saint Martins in 2014 with an MA in Fine Art.

After losing her dad, Brian in December 2013, Brightside spend most of her time in 2014 commuting to London and helping mum Carol back on her feet. ‘By early 2015 I decided to up-sticks again. I had had Hollywood on a vision board so I thought why not.’

‘Moving to LA had been a thrilling and interesting tale. One of hard work will prevail. This place like no other. It tests your character. I was lucky to be guided in safely. I found great support network and friends. Then eventually clients. Conducting business is also interesting. Building relationships and a creative team, getting the pace right from nurturing an idea and being ready to execute it at a moments notice. My feet have stopped itching. I love it here and think I found my home.’

Please tell us about WELCOME TO THE BRIGHTSIDE.
A good friend and collaborator Annie May from the interior design firm Kuskin-May was in 2015 re-designing the restrooms of the Farmers Daughter’s Hotel restaurant Tart. May had encouraged my illustration work from when we first met. It was over a bottle of wine and a cheese platter we began the concept of 2 wallpaper in the male and female restrooms. (please read the story behind this from my website, Red and the Wolf Within http://www.welcometothebrightside.com/#/red-and-the-wolf-within-f/

One job leads to another. My next project was designing wallpaper for the Barn at the Farmers Daughter Hotel. Atargatis Wallpaper for Surftides Hotel, Lincoln, Oregon, this design was also purchased by artists Jennifer and Matthew Carden for their inspirational creative home in San Fransisco by interior designer Kimberly Rider Interiors. I then pieced together a Calypso Album cover Wallpaper for Clyde’s bar in Brooklyn, the first Trinidadian cocktail bar in NYC part-owned by Major Lazer member Christopher Leacock.

The Kimpton La Peer Hotel, The Passport was completed in early 2018. November 2017 I became the creative director to Executive Chef Jason Fullilove over-arcing company Ethereal Palate LLC which according to Eater in 2017, Fullilove’s successful Barbara Jean LA pop up restaurant is currently on the top 10 list of best brunch in LA. Lastly, my latest work hot off the press in a Mural in Cafe Serve on Second in Hermosa Beach owned by Pro Beach Volleyball Player, Jon Mesko, which opens late May 2018.

Its been a busy few years what with starting my creative agency, clothing brand and launching my first book. It’s funny to think it all started with chewing the fat on design with Annie May over wine and cheese.

I love working in public arena of hotels and restaurants. The artwork I’ve produced over the last 3 years has been in an area that evokes feeling and set the tone of a space. I really enjoy the design of restrooms, you may laugh but going for a pee really can change a pace of an evening. If we design a magical fun space of a restroom it awakens positivity and recharges the patrons and guests. It can also be a great conversation starter if your Tinder date is going bad.

Overall in the service industry, I believe times are changing. People want to feel special and have experiences that feel unique to them. I think there is a massive change coming from corporate design to bespoke approaches in branding. Creative communities all sharing a space on the same project.

I mostly enjoy the challenge of a new project and finding a different methodology in art direction or creative approach. I don’t want to pigeonholed as that muralist that does the repetitive design. I want to push myself constantly evolving and growing as its humanly possible to do.

It was early 2017 and I had manifested a change in clients. I was introduced to a freelance agent/creative business developer who was at the time my knight in shining armor. In was her introduction to Kimpton La Peer Hotel GM Nick Rimedio that a creative journey on a dream project began.

Nicks job title included more than managing a hotel it was to create a unique space that both international and out of state guests could relax and enjoy, whilst West Hollywood locals could socialize and feel that sense of creative community at the heart of the neighborhood.

The whole premise of the hotel was to draw the neighborhood together, using local talent, from interior designer Gulla Jonsdottir to local Melrose coffee roasters Toasted and Roasted. That’s where I came in, a local artist and resident of WeHo for 3 years.

Our first conversation was to discuss my cartography services. The discussion soon digressed on a creative tangent to design a treasure map. When we refocused we narrowed the projects into 2 separate identities, designing a map and a guest keepsake given at check-in called The Passport.

The Passport began life in March 2017 and was 10 months of research and development concluding in 150 illustrations of all the WeHo hotspots.

I would describe The Passport as a collage of Instagrammable moments, hidden art treasures, restaurant and bars and the fancy dress cow that entertains me in different outfits daily outside Mulligans Interiors on Melrose Avenue.

After seeing the first draft Kimpton corporate office gave me the title of the La Peer Hotel artist in residence. It was an honor to be acknowledged and appreciated. I think we created an informative piece of work which is the first in the series of many to come.

Furthermore to celebrate the project I have booked a week-long art exhibition in the drawing room of the La Peer Hotel, August 2018, where The Passport will transform from a 5” x 3.5” book to larger than life artist prints.

If you had to go back in time and start over, would you have done anything differently?
Nothing, I am and my business is a combination of who I am today because of all the things I’ve learned. I appreciate all the good, the bad and the ugly. 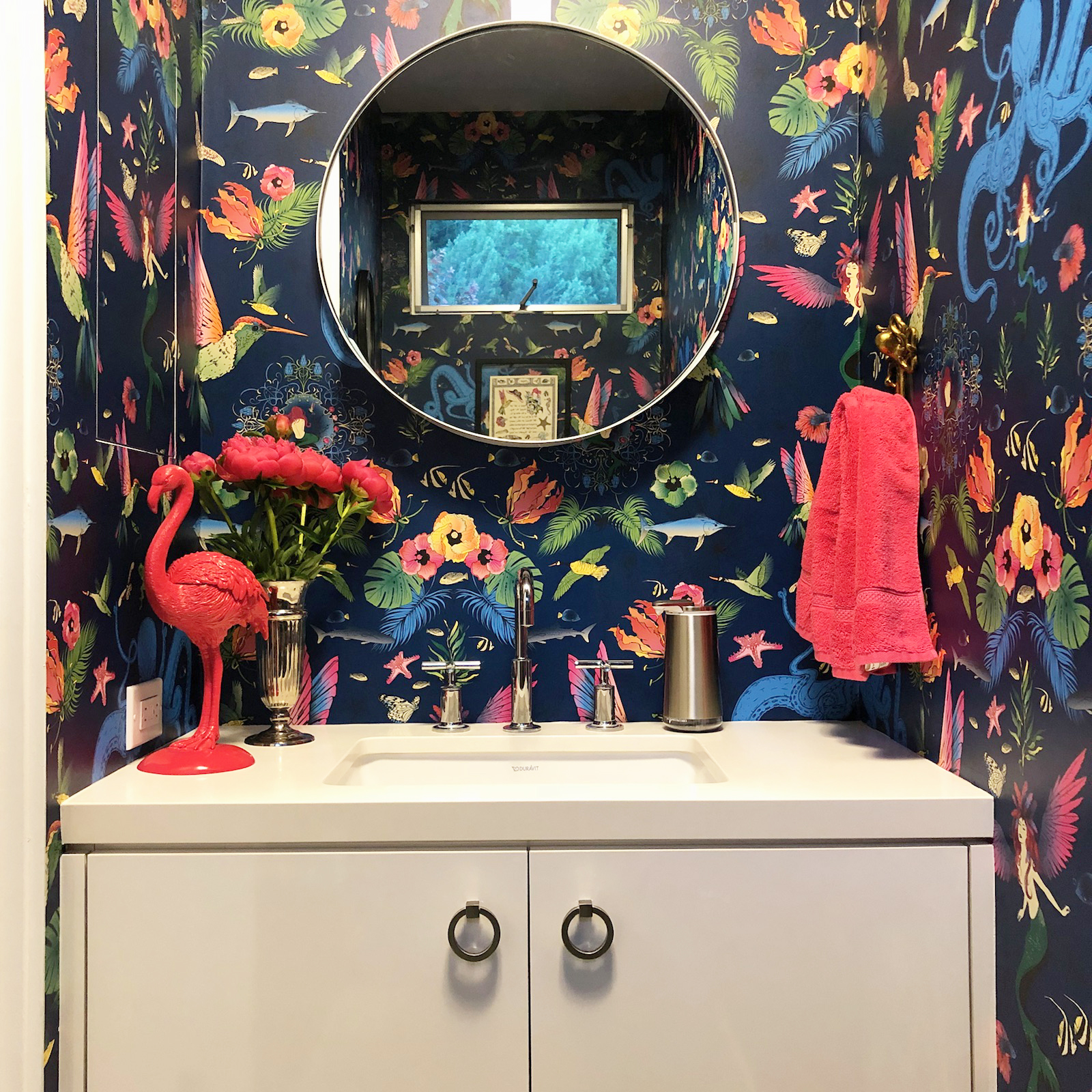 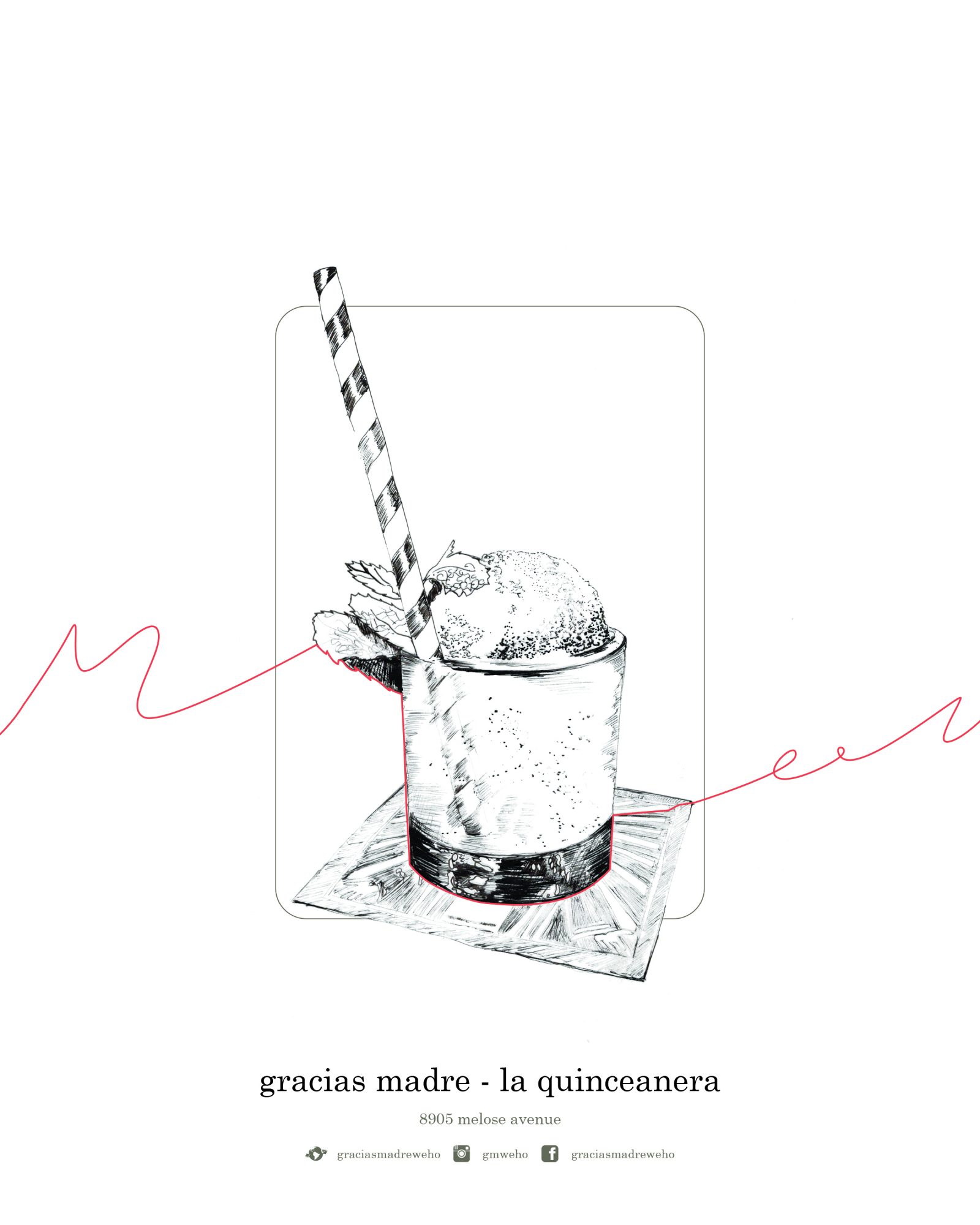 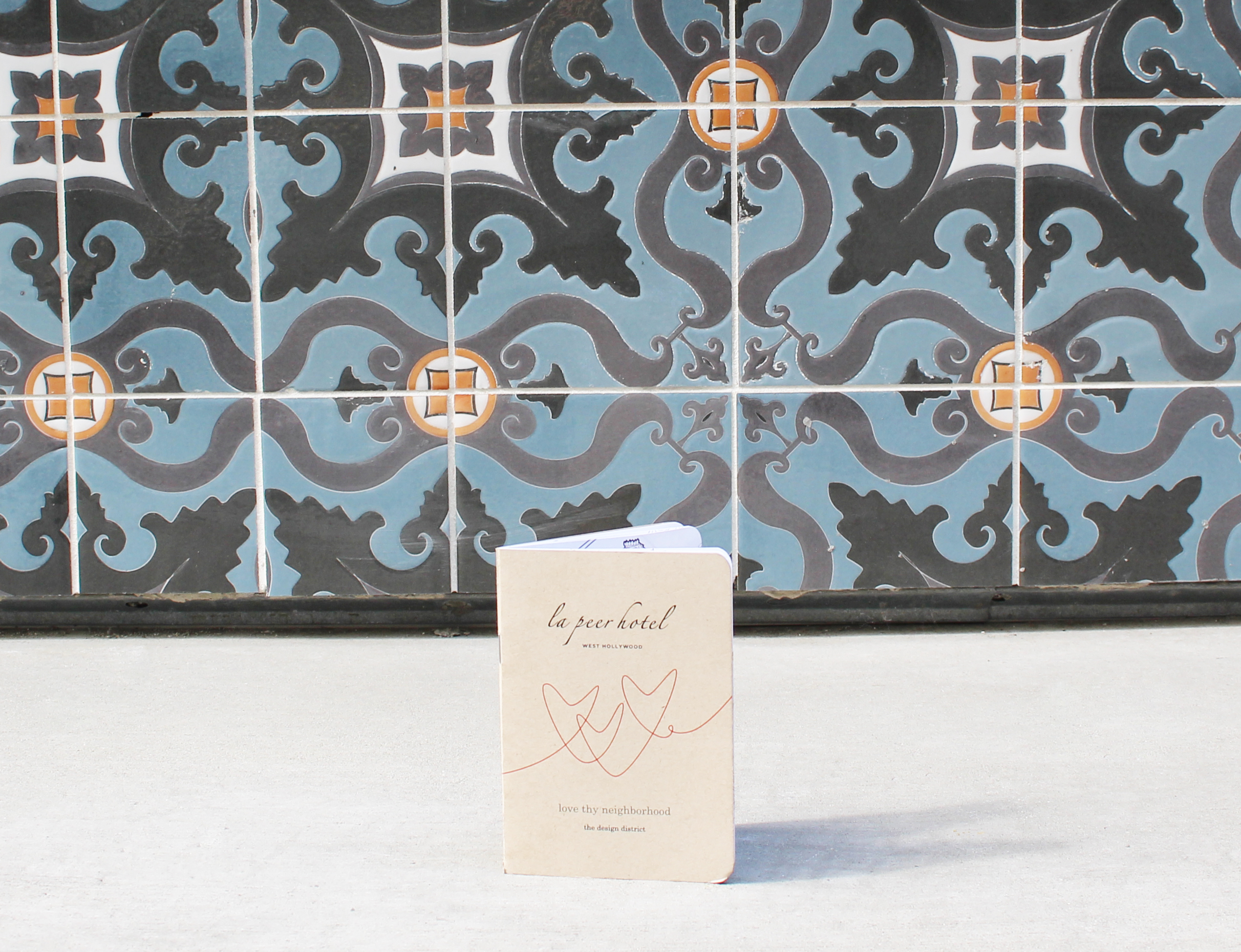 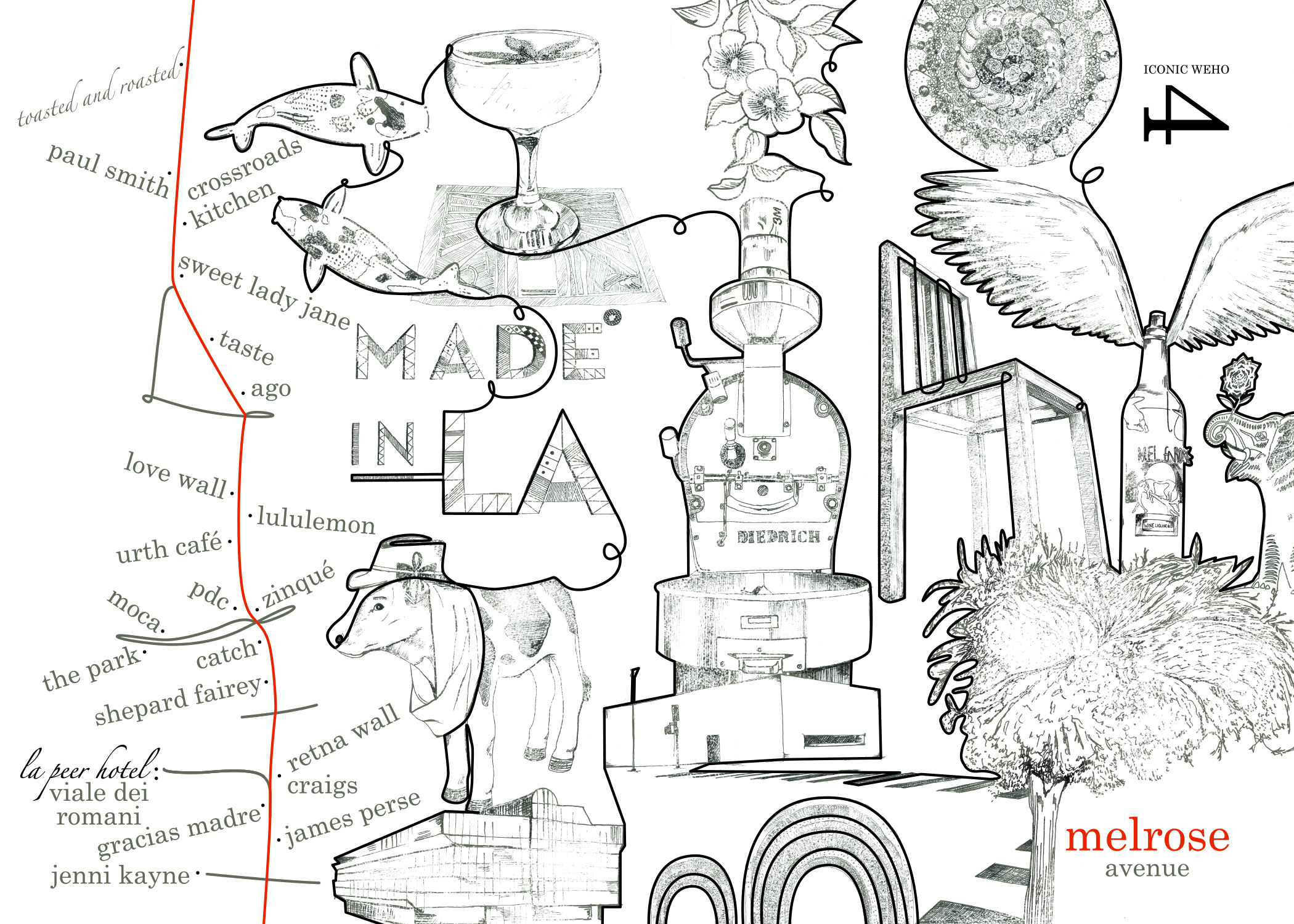 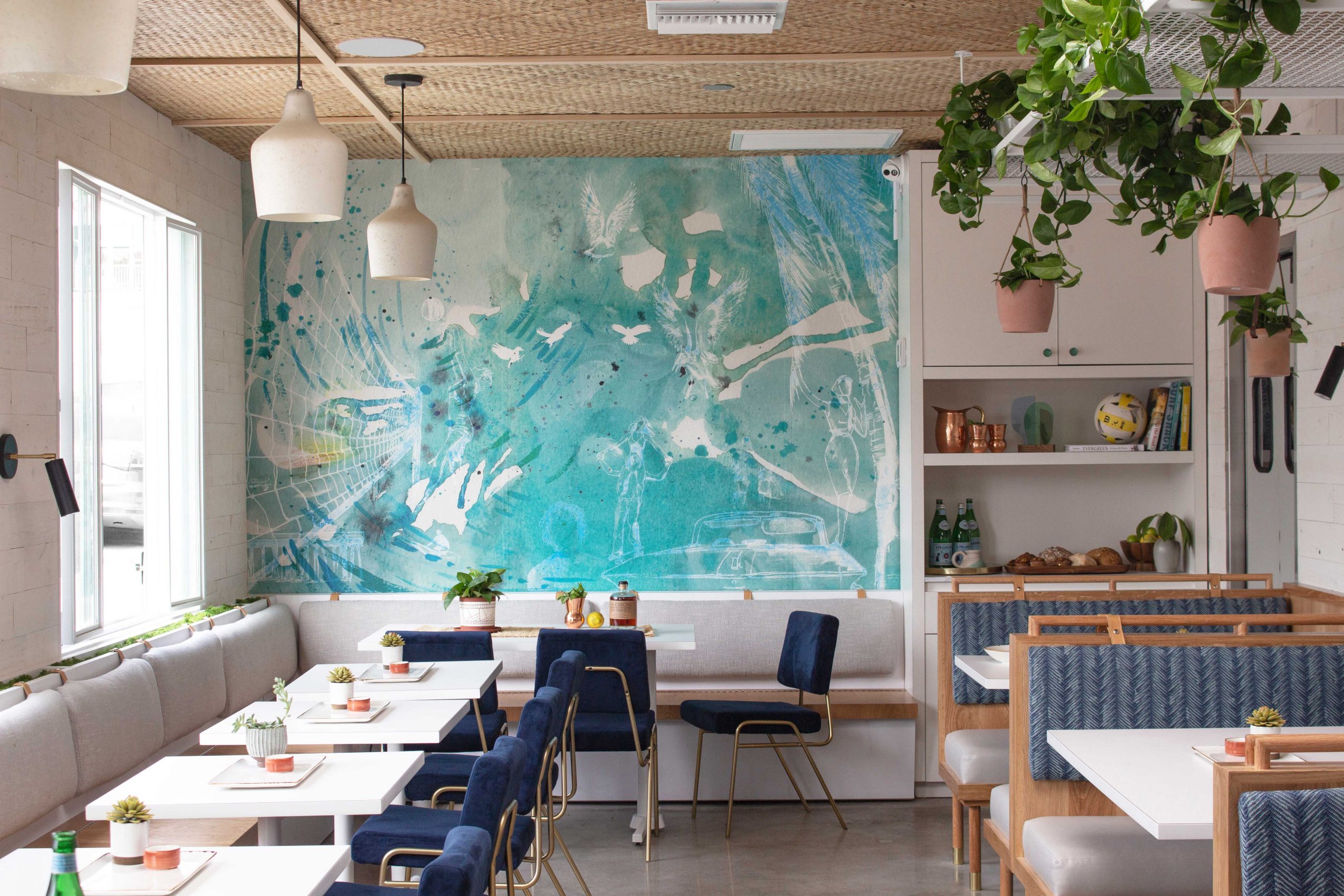 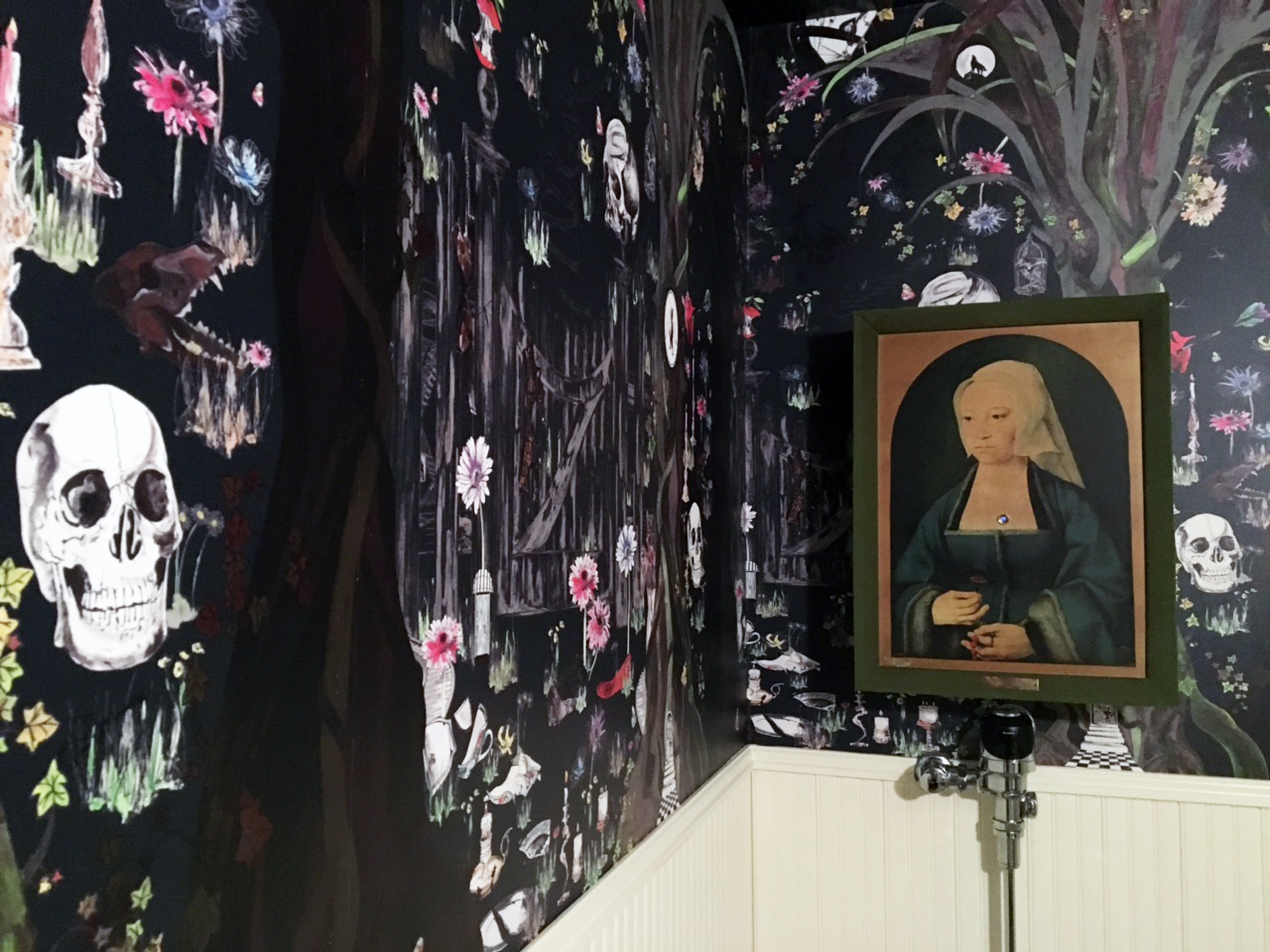 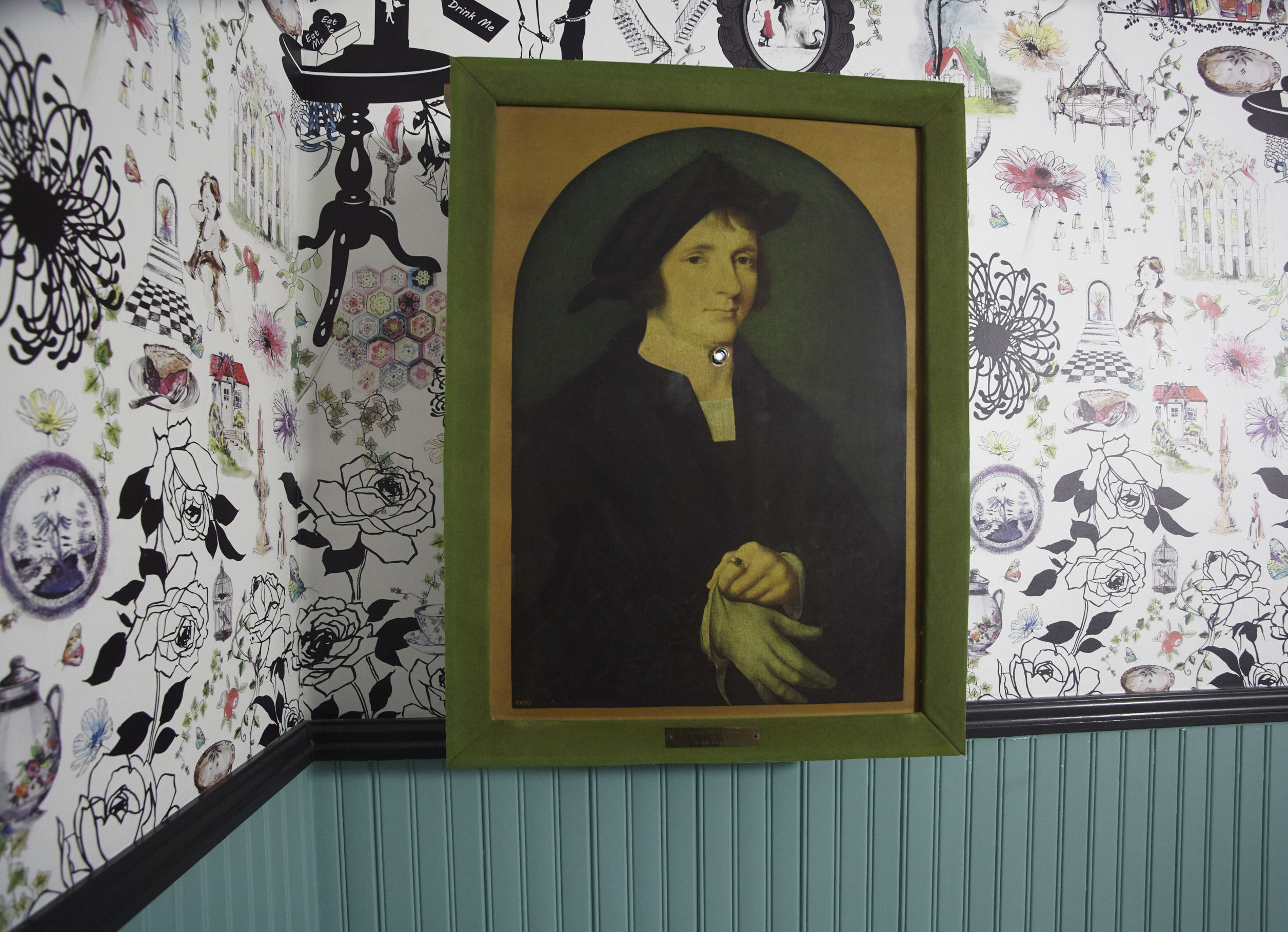 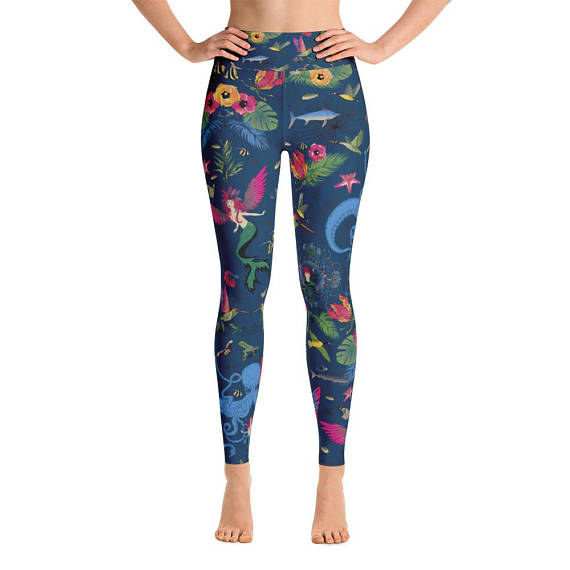