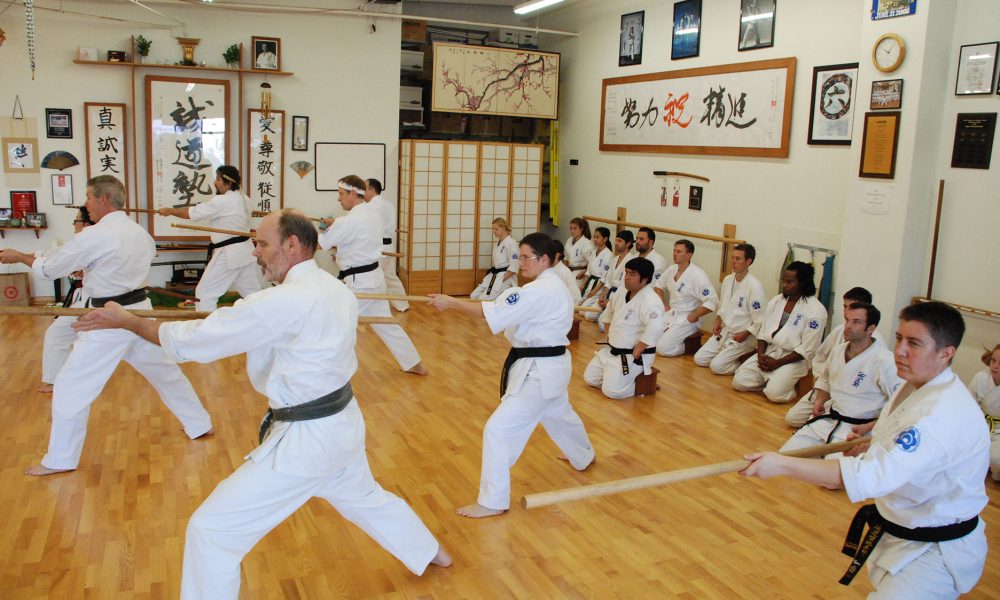 Today we’d like to introduce you to JJ Asher, Jeff Fontelera and Nikki Bidlingmeyer.

Our head instructor, Jun Shihan John Greene, is the Seido Karate Los Angeles Branch Chief and hold black belts in Seido and Kyokushinkai Karate. He began his formal martial arts training in 1970, training in Jiu-Jitsu and Judo under Master Sensei Nobuyoshi Higashi. In 1971, he began his study of karate-do with world renowned karate master Kaicho Tadashi Nakamura at the 14th Street dojo in New York City while at the same time continuing his training under Sensei Higashi. He trained three times a day practicing Jiu-Jitsu, Judo and Kyokushin Karate, and received his shodan from Kaicho Nakamura in Kyokushin Karate in 1975. A year later, Jun Shihan John arrived in Los Angeles and by 1980 he was overseeing martial arts programs for the Los Angeles Department of Parks and Recreation at the Northridge Park. In 1980, he returned to New York to train with Kaicho Tadashi Nakamura and receive his Black Belt in the newly formed World Seido Karate Organization. In 1981, Jun Shihan John and his students became members of the World Seido Karate Organization and the official Los Angeles branch was established. For the past 26 years Jun Shihan John and his staff of qualified instructors have been teaching Seido karate to children, women, and men in the Los Angeles area. Presently he is teaching at the Hollywood Dojo and oversees all outside Seido programs taught by his students. He currently holds a 6th degree black belt, a master rank in the Seido system.

Overall, has it been relatively smooth? If not, what were some of the struggles along the way?
The biggest struggle we encountered in our 26-year history was the 1994 Northridge quake. Our dojo was destroyed in this earthquake and for several years afterwards we practiced at a number of locations. It was through the dedication of our students and instructors that our dojo has not only survived, but thrived. Finally, in 2006, we found a permanent home in Hollywood where we continue to be committed to both the training and teaching of Seido Karate.

Please tell us about Seido Karate Los Angeles NFP.
“Technique rather than strength. Spirit rather than technique.”
– Kaicho Tadashi Nakamura

“Sei” in Japanese means “sincere” and “do” means “way”. In Seido, the belief is that karate is not just about kicking and punching, but about building the individual from within. Competition is not with others, but within yourself. Seido seeks to develop in each student a ‘non-quitting’ spirit. No matter what the obstacle or difficulty — emotional, physical, financial — though the student may be set back, they will never be overcome by any of these problems. The sincere practice of karate can impress this idea into the spirit. This is the modern interpretation of the bushido spirit.

In today’s day and age, Karate has evolved into a competition-centered sport. While martial arts do train individuals to engage in kumite, or sparring, it is not everything that martial arts has to offer. Kaicho Nakamura and his over 50 years of commitment to the study and practice of martial arts, founded Seido Karate to move away from the competitive aspect and to focus on the most important part of martial arts: the training of body, mind and spirit together in order to realize the fullness of human potential. According to Kaicho, this is the universal truth to karate-do. This is what sets us apart from other schools.

We are most proud of our individual students, watching them develop in their technique and as people and the community we all create together.

If you had to go back in time and start over, would you have done anything differently?
JJ Asher – “I would have started 26 years ago. I wish I had known about this dojo then.”

Jeff Fontelera – “I would have gone to class more often. Seido Los Angeles not only has affordable tuition but has guidance, teaching and a learning environment that’s priceless. It is inclusive, everyone is supportive and has a great energy. It really is a community gem.”

Nikki Bidlingmeyer – “I do wish I had found Seido 2 years earlier than I had when I was in Chicago. It is a treasure that helped me get back to myself and become a better self.”