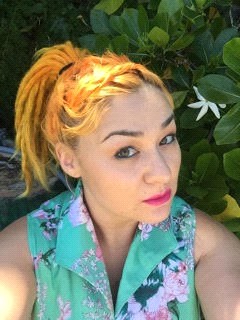 Today we’d like to introduce you to Ally McGillicuddy.

Ally always knew she wanted to be in film industry.  “I thought I wanted to act, and then I thought I wanted to direct. I went to film school, learned everything from preproduction to post production and realized I didn’t like that stuff much.  I was an artist at heart,” she shared.  In college, she did hair and makeup on the side to earn extra cash and a friend saw her work and introduced her to someone who was making a film.  She did special effects makeup for the film and realized that she might want to do this as a career and so she moved to LA.

That’s when things got crazy.  Her car was stolen.  She was chased by strangers into an alley.  She got into an accident.  Her grandmother passed away and her long-time boy friend broke up with her.  She didn’t find work easily and was crashing on couches for a month or two while working at coffee bean in the mornings and a doggy daycare in the evenings.  In these circumstances, giving up and going home would have seemed like the logical choice – but Ally refused to give up.  She fought through the adversity, hustled, networked, and made her way into the makeup and beauty industry in LA.  The day she quit her job as a barista was what she considers “the best day of her life.”

Flash forward a few years and Ally has built a thriving makeup career in our lovely city of angels.  She has worked with celebrities and film and video producers through the greater LA area and continues to build a name for herself.

We love Ally because she is a living testament to how perseverance and courage can lead to great things.  Check out her work below: