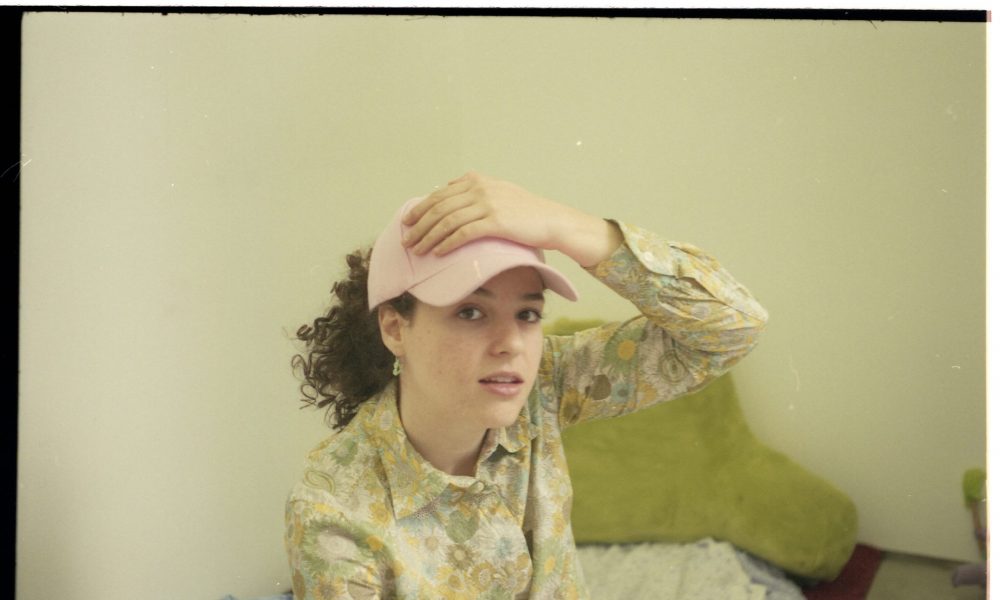 Today we’d like to introduce you to Giovanna Pizzoferrato.

Can you briefly walk us through your story – how you started and how you got to where you are today. You can include as little or as much detail as you’d like.
Some of my earliest memories are color imprints. My very first memory is of bright yellow sunshine on my face, and the warm blue sky through the sliding glass door of my childhood home in Los Angeles. Another early color imprint I have is from my trips to Brazil as a toddler (my mother is a Brazilian immigrant to the US). I remember staring in wonder at the ruddy red brick color of the earth at the edge of the road. Every time I get back to Brazil, I’m looking for that red earth, comparing it to my expectation, testing my brain’s color-memory.

I am very lucky to have had the best art teacher in high school, Paula Hutchings; she was more like a mentor – confirming that my instincts were good and encouraging my talents. That was when I learned to trust myself and my intuitions in terms of art making. We have become colleagues and collaborators. In 2018, we self-published an artist folio, a project which Paula conceived and researched, then I contributed graphic design and production. We are currently working on another publication, where color will be an important conceptual aspect of the book. So my art teacher ended up being the best friend I made in high school!

I went to three different colleges to complete my BFA, due to a lot of reasons. Since graduating, my mission has been to support myself while always continuing my fine art practice. I’ve been freelancing artist assistant gigs, graphic design, and teaching art classes; this has given me the freedom to trips to Brazil whenever I can. Right now, I’m working on an exhibition idea that stems from curiosity about my father; thinking about the parallels between golf and painting. Continuing my investigation of culturally ‘male’ activities or objects, like I have done in the past with my engine series.

Something new that is happening with these playful golf paintings is that some of them are becoming object-sized, like a painting that rests on top of a pair of my Dad’s old golf shoes. I’m also looking at golf towels in contrast to domestic towels, and recreation vs. domestic labor (often ‘female’). I have some video pieces sketched out too. I’ve been obsessed with the color green for several years now, so these golf paintings are a great way to get onto the green.

Great, so let’s dig a little deeper into the story – has it been an easy path overall and if not, what were the challenges you’ve had to overcome?
There were some really dark years. When I was in my first year of college at The School of the Art Institute of Chicago, my first love and high school sweetheart, Brooks Paul, died of osteosarcoma. We were just 18. That was also the first real winter I ever lived through – Chicago weather was so brutal for a mourning California girl. Then it was one shock after another. My first time living on my own, Brooks’ death; a mugging and multiple assaults… I lost my education at SAIC due to unexpected financial reasons. I had to drop out and move back to LA, it was devastating.

After some community college, I ended up at ArtCenter College of Design, where I had taken painting classes during high school. At this point, I was paying my own way through college, and I poured myself entirely into my artwork. The workaholic culture at ArtCenter was intensely motivating. In 2014, I painted a mural in just three days that was my ‘kill your rapist’ moment. I metaphorically murdered Zeus in atonement for his raping of Leda. It was also a criticism of the fetishization of the Leda and the Swan myth throughout art history. Painting that mural was a turning point, where I started to tap into my power.

This empowerment despite the trauma, through the vehicle of my artwork lead me to another significant breakthrough, this time related to Brooks. I made some paintings of him just after he died in 2010, but that same year I had to leave SAIC; for a while, I got really down on myself as an artist. I wanted to make more work about Brooks, but I started telling myself that I should be a ‘real artist’ before I could make any artwork about him, because they had to be ‘good enough’ for his memory, so they could ‘do him justice.’ That logic made me feel like I wasn’t a good artist, no matter how hard I was working, and it made Brooks feel even farther away from me.

So I finally broke out of that attitude, choosing to bring him back into my present life, willing to take the risk of making bad artwork about Brooks. I found the courage to make these paintings that I had been thinking about for years. That’s when I began developing a sentimentality for objects in my work, dealing with loss and absence. “Portrait of Brooks Paul in 2015” and “Near Death Experience” are some examples. In spite of the challenges, it is beautiful to develop my metaphysical relationship with Brooks in this way.

Tell us about your business/company. What do you do, what do you specialize in, what are you known for, etc. What are you most proud of as a company? What sets you apart from others?
I am an artist and designer. I relate to myself as a painter, although I also make a lot of drawings, sometimes video, performance, installation. I have experience curating exhibitions as well. I love working analog and getting my hands dirty. In all things, I consider color, the quality of the surface, and the presentation of the object. The “aura” of the physical object is important. I like using a brush that’s too big for what I’m doing and really blunt drawing tools; I’ve been called a Luddite and a masochist by my peers, because I prefer to do things by hand, the tedious analog way.

I’d say I’m the most proud of my international connection to Brazil. In 2018 I had a solo exhibition at MECAintro in São Paulo, and shortly thereafter I collaborated with a Uruguay-based Brazilian gallerist to curate an exhibition of six Latinx-American artists in L.A. In March of 2018, I launched the artist folio project I previously mentioned at Feira-Plana, the international book fair in São Paulo. Being able to connect art and artists internationally in both of these cities which I have called my home is challenging and rewarding. I’ve become so fluent in Portuguese that I pass as a native in Brazil all the time. I don’t stand out as a gringa right away.

I am probably most well known for my engine series, based on my little seafoam green 1979 Rabbit that I bought in 2015. I got it because I wanted to learn how to drive a stick. In LA our cars can become like an extension of our personalities. It was a really charming and handsome car, but it had a lot of problems. I’d get random strangers asking to buy it from me all the time, or I would find little notes with contact info tucked under my windshield wipers. I could fit a 6-foot-long canvas inside of it, and strap even bigger paintings to the surf rack when I needed to.

When you’re driving an old car, you have to learn something about how it works, because it’s going to break down on you all the time. I started by reading the owner’s manual and doing drawings and paintings of the engine, looking for connections. Eventually I was changing my own oil, replacing the clutch cable, the alternator, the head gasket… I could go on. People usually want to go with something reliable, which is practical. But you don’t learn anything from something that always works perfectly. It’s only when something breaks down, that you have no choice but to figure out how to fix it, how to make it work again.

What were you like growing up? Personality wise, interest wise, etc.
I was a nerd, very studious, and I read a lot of books. By middle school, I was a defiant little feminist. I was never afraid to speak my mind. One time, this lady from administration interrupted English class, asking all the strong boys to raise their hands if they wanted to help her move a bunch of boxes. I raised my hand, and she chose six boys. I was so furious that I was not chosen. My Mom likes to joke that I was born a feminist. When I was 2 or 3, I would always try to pee standing up, copying my Dad. It was such a mess, Mom had a really hard time teaching me to xixi como uma menina.

Like most of my generation, my parents divorced when I was little. My sister and I were raised by a single Brazilian mother. She often likes to joke that she was “the mother and the father” and she demands gifts and attention on Father’s Day. Since a young age, I’ve thought a lot about what is culturally appropriate for men and women; I’ve always questioned what’s ‘normal’ and am wary of blind faith. Being raised Catholic, with a lot of influence from my devout Brazilian family, I grew up with strict binaries of what a girl should or shouldn’t do, and what I ‘should’ believe. I sometimes wonder how my childhood would have been different if I had been born a boy – the things I would have been exposed to by my family and culture. Maybe I would have been given a skateboard or a soccer ball instead of a life-sized Barbie doll when I was six.

Growing up agnostic in a devoutly Catholic family is something I have been grappling with in my artwork recently. In 2018 I began a series of paintings about this beautiful rosary my Brazilian grandfather made for me when I was born. I remember when I was a child, he would be always be working in his little studio, constructing impossibly intricate chains out of simple spools of wire. Ever since I was a child, I’ve been interested in craft, technical skill, and labor involved in all forms of making and working by hand. I see a lot of parallels between religious faith and the faith required to be a fine artist. 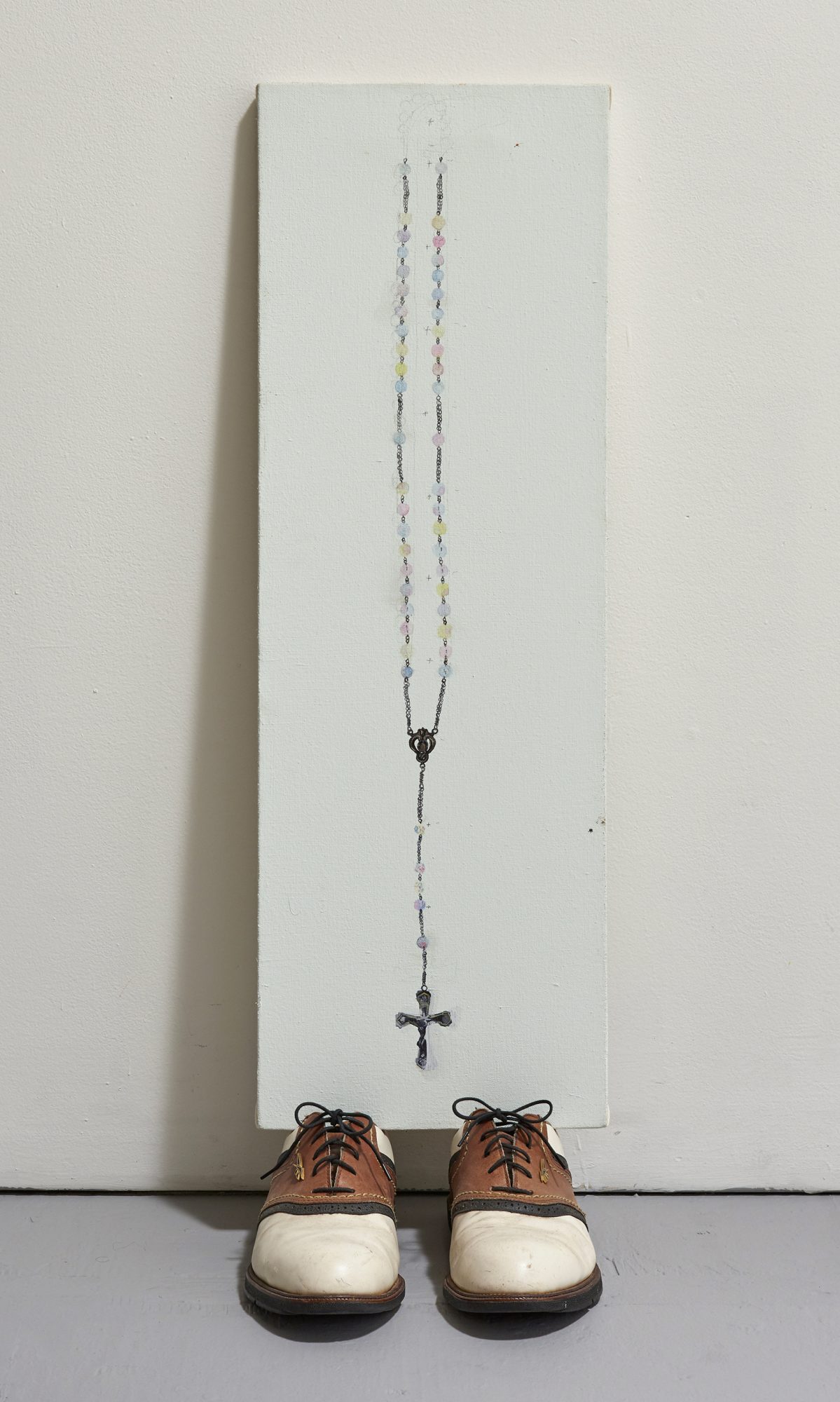 Painting of the Rosary her Maternal Brazilian Grandfather made for her when she was born, resting on her American Dad’s golf shoes
house paint and oil on canvas, Dad’s golf shoes
33.5” x 10” x 13”
2017 – 19 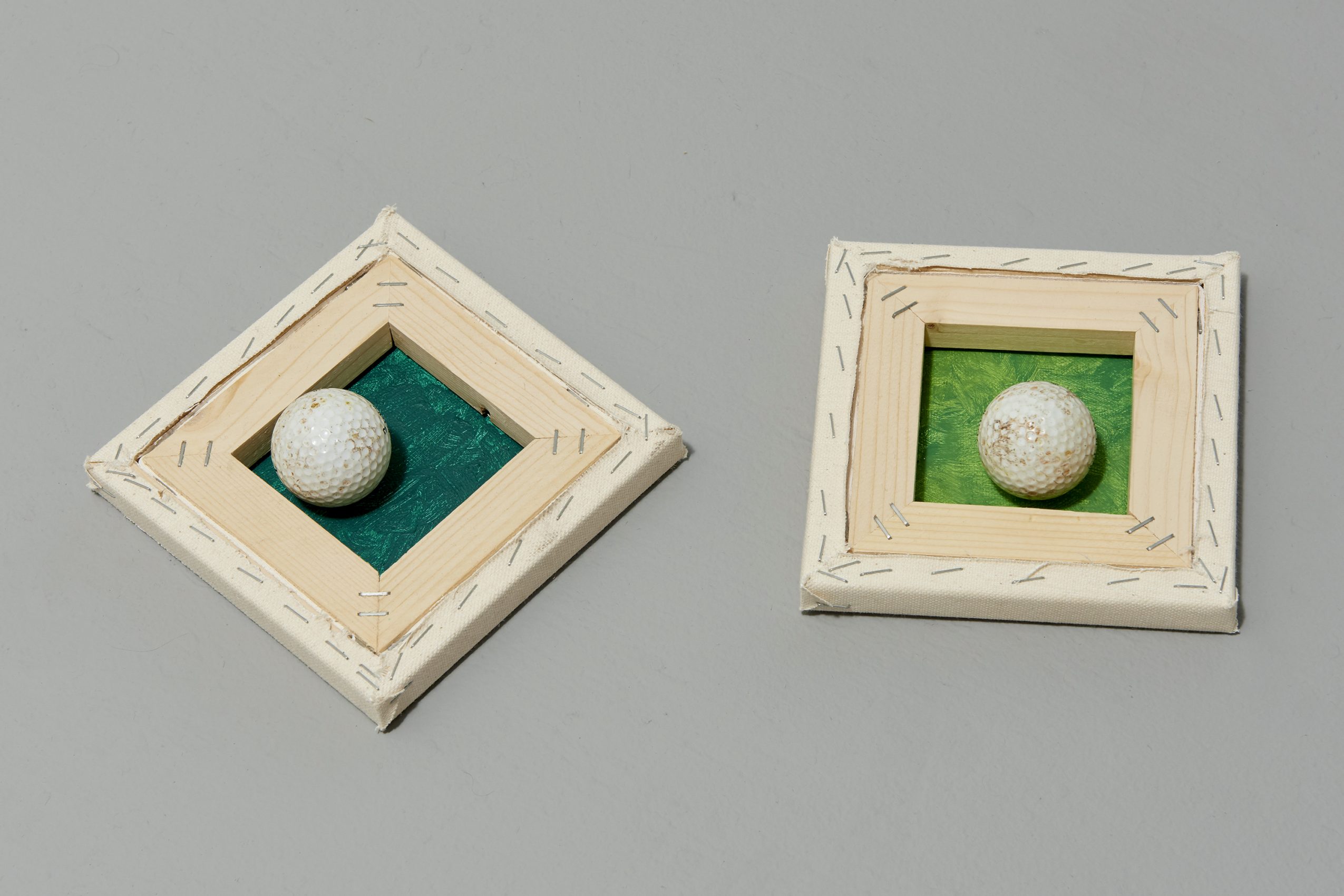 Agnostic Rosary Painting III
acrylic, oil, and graphite on canvas the height of the artist
5’3” x 20”
2018 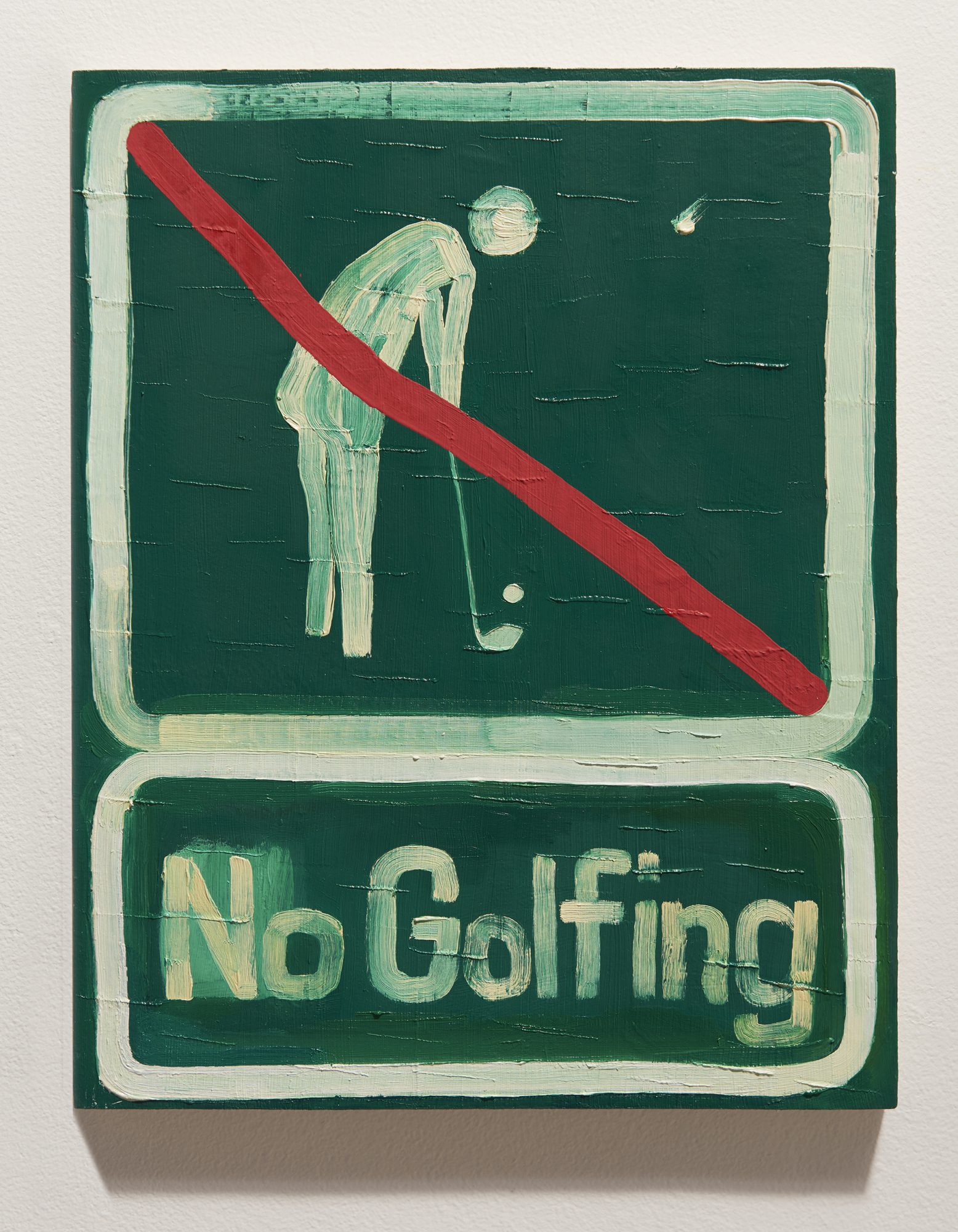 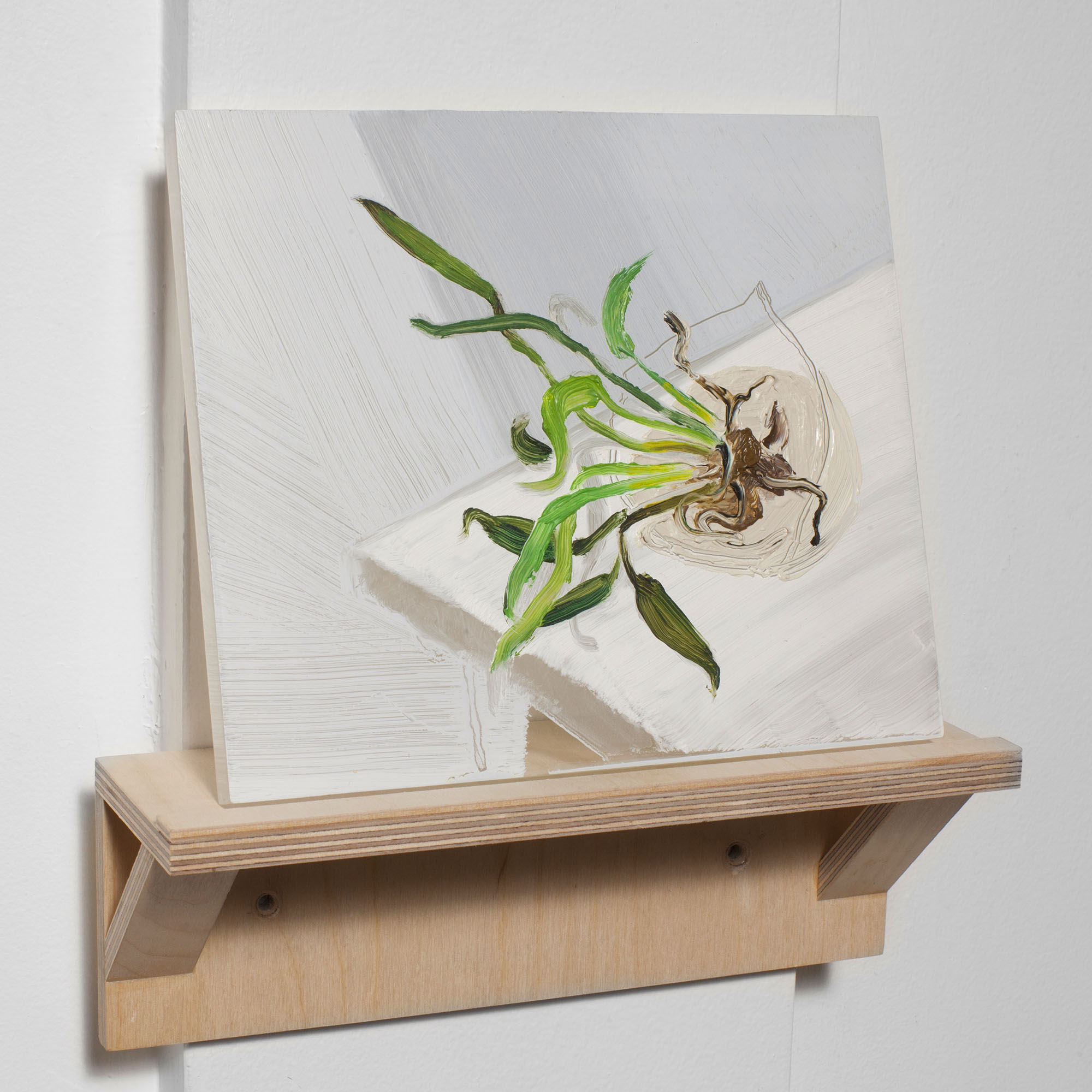 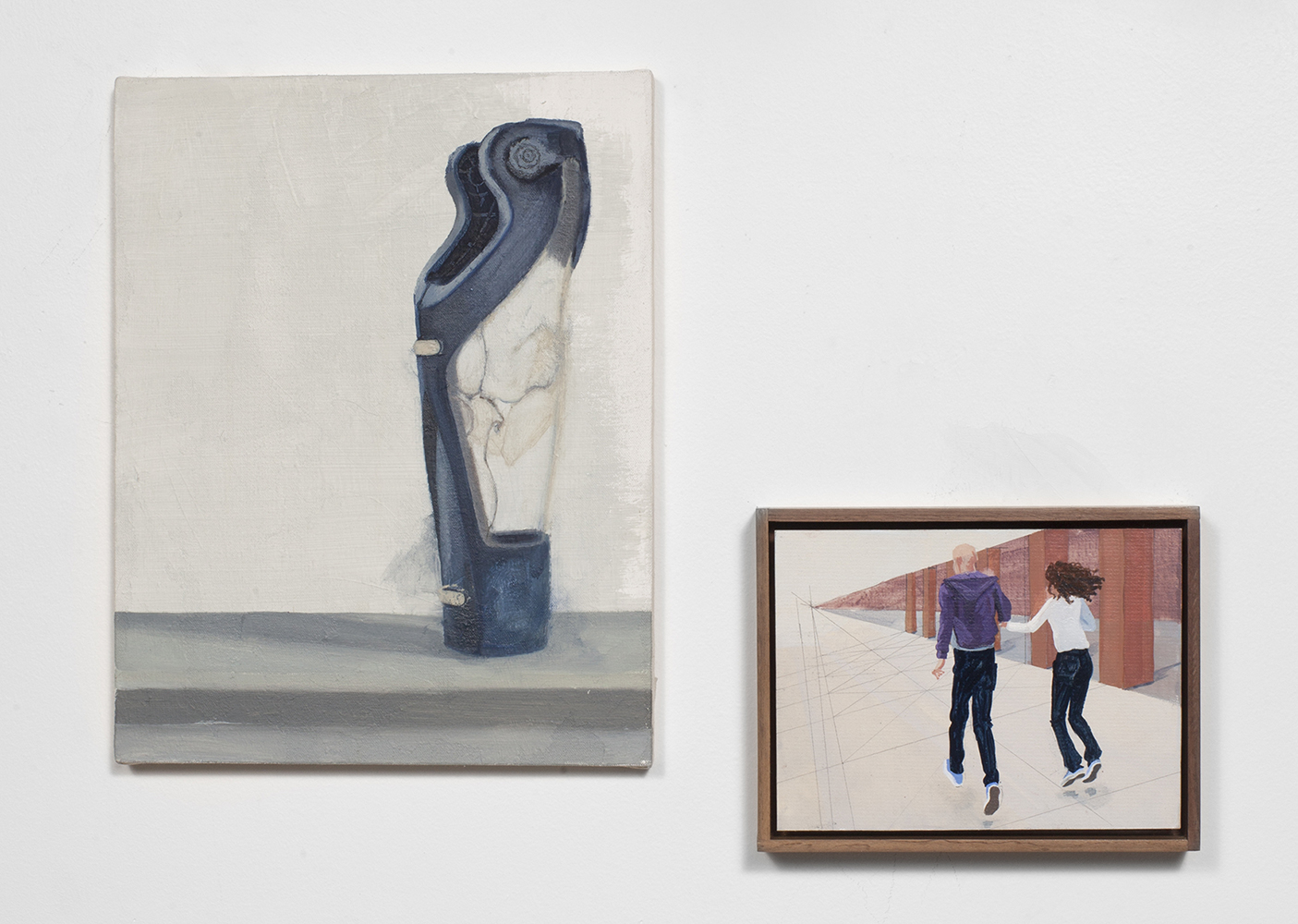 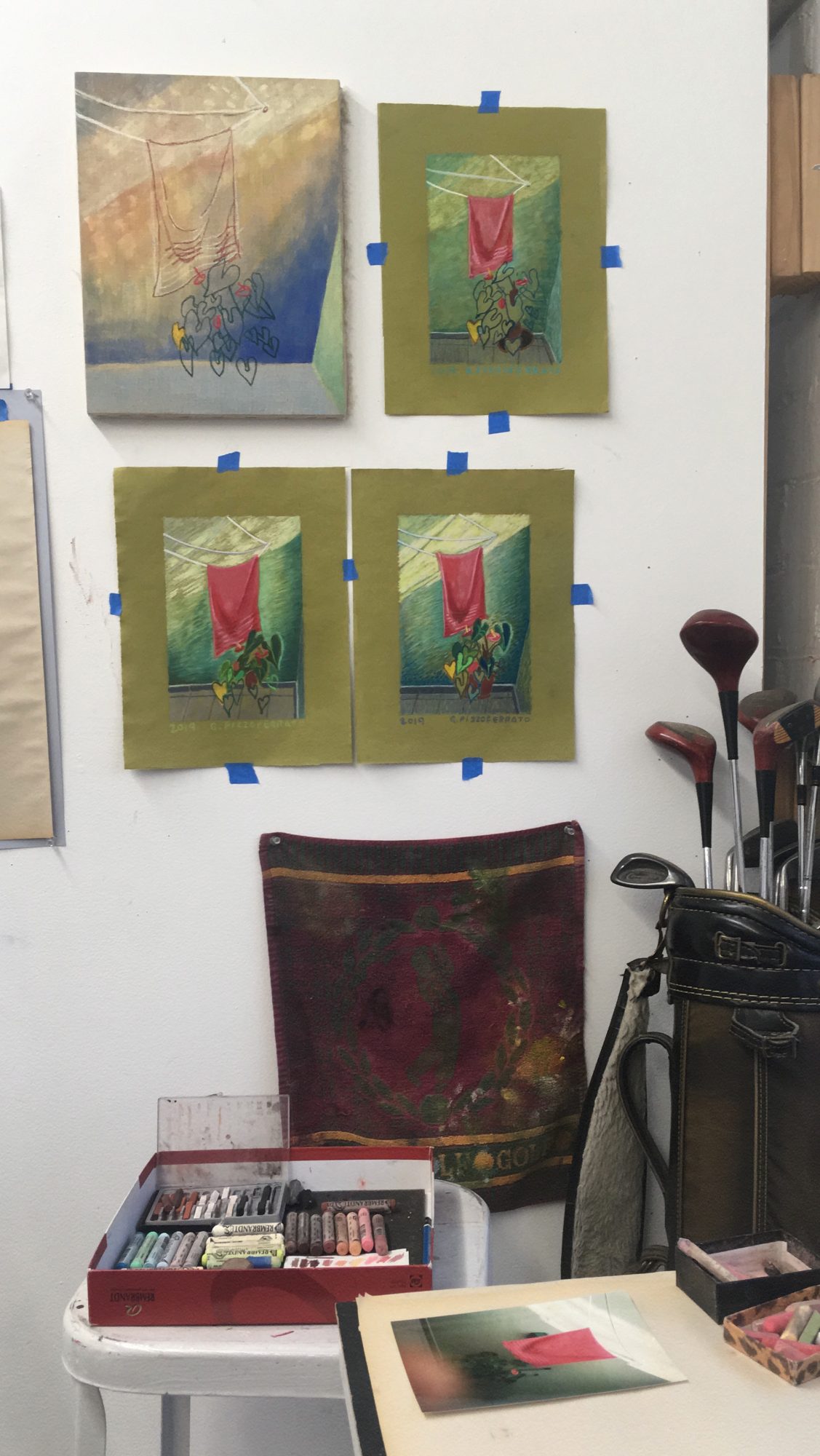