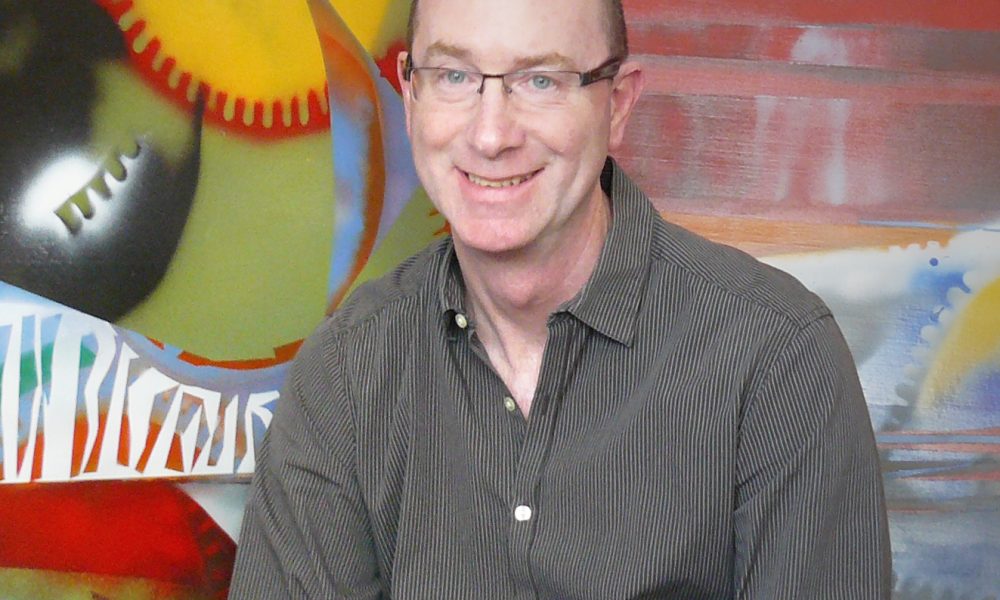 Today we’d like to introduce you to Gill Miller.

Gill, let’s start with your story. We’d love to hear how you got started and how the journey has been so far.
Even though my education is in art and design, my art career from the very beginning to now has been a series of chance encounters with the craft. I started spray painting on random pieces of wood in 2009 one day when I was just kind of bored. I was between jobs with a lot of extra time on my hands. I was hooked. I believe the spray paint medium was the thing that hooked me. I don’t like painting necessarily with brushes, which is what I did in school. Over the next seven years I spent many, many hours trying to find myself on the canvas. I explored several styles that seemed to fit me, however I wasn’t quite there until one day in Oct. 2016 I was outside spraying a canvas and I noticed a series of lines and vertical shapes in various colors in the over-spray next to the canvas on the paint tarp. I knew immediately that the lines and shapes that I was looking at were what I needed to be doing with my art. My deconstructionist style of art had given way to a style that was defined by various width lines, some with curvilinear edges, random, but with a structured composition. I continued to play with the color palette of dark and intense colors that I had been using since the beginning, and incorporated one that was softer and less intense, light and medium blues and greens and pinkish reds. My new style of art was born. I had finally found myself.

We’re always bombarded by how great it is to pursue your passion, etc. – but we’ve spoken with enough people to know that it’s not always easy. Overall, would you say things have been easy for you?
I spray-paint outside. In the alley. It’s free, and the fresh air is great. However, the only place that I can paint without getting paint fumes in the apartment windows that surround me is next door by the medical building, which has no windows in that area. So, it’s perfect! Except for the medical building superintendent who would chase me off the first couple of years that I was out there. At one point, he even accused me of spraying graffiti on the building. So, I would have to paint guerilla-style – paint and run. After a couple of years, he got used to me painting out there, and then one day he came by and pulled out his phone and showed me some of his art projects. I was kind of floored. Since then we wave at each other and sometimes chat about our art projects.

So let’s switch gears a bit and go into the Gill Miller Art story. Tell us more about the business.
I paint and sell original acrylic abstract canvases and prints of some of those, and I create graphic arts and sell prints of those. The canvases I sell from galleries as well as Saatchi art, and the prints I sell through Imagekind. I also have two new shops on Etsy for prints. I also sell both from my website, gillmillerart.com. Since 2010 I have been in about 12 art shows here in Los Angeles and in San Francisco. My last art show was at Loft @ Liz’s on LaBrea, and my next one is in August at Beyond the Lines Gallery in Bergamot. I became a member of Los Angeles Art Association in 2014; after applying 4 times I was finally accepted. I think what I’m most proud of as an artist is that I have stuck with it, even when I didn’t fully believe in what I was doing. I knew that day would come, and it has, finally, with my new art style that I discovered in random fashion. It fits me so well.

What sets me apart from others is that my art is original to me. I have many influences and I admire a lot of art, but I’ve not seen this same art in the artworld. And my passion. People tell me most often the thing that strikes them about my art, besides all the color that I use, is the passion they feel from the canvas.

Has luck played a meaningful role in your life and business?
I don’t really think about things in terms of good or bad luck. Maybe it’s semantics, but I think about good things happening and bad things too, and trying to make the most of whatever situation you’re in. Maybe if I won millions of dollars in the Lottery. I would call that luck. I’ve even heard of people describe that as good and/or bad luck. But normal things that have happened to me I just describe as good or bad and run with it. Not saying, though, that the bad is ever easy to deal with.