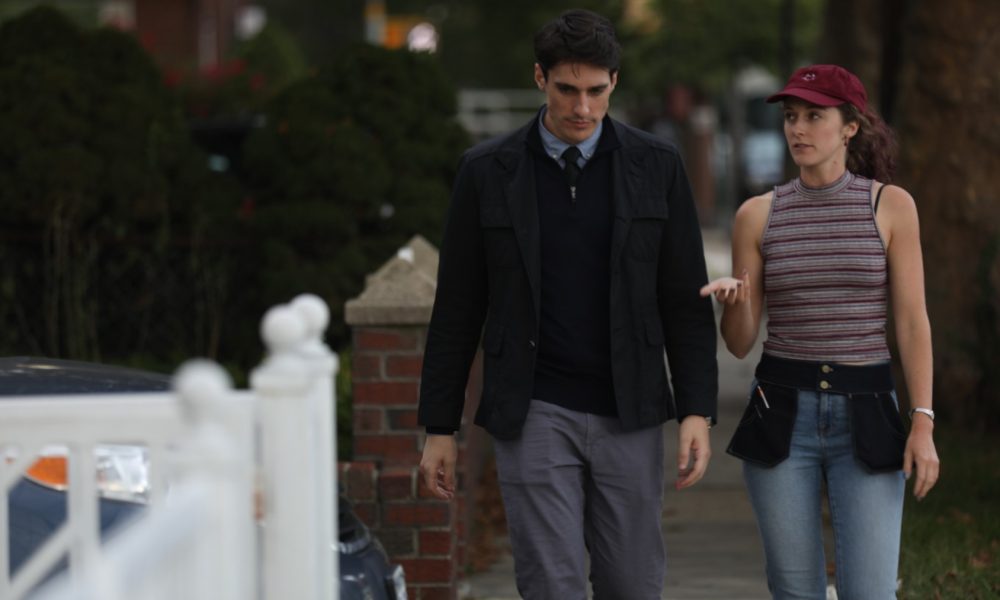 Today we’d like to introduce you to Erik Kochenberger and Dana Brawer.

Erik and Dana, can you briefly walk us through your story – how you started and how you got to where you are today.
Erik: I grew up in Pueblo, CO. I was the type of kid at five years old that would go to a family wedding or reunion and demand that I have the microphone to tell a knock-knock joke. My cousins and I would make home movies spoofing Abbott and Costello and Star Wars. Through middle school and high school, I continued to make shorts and sketches for school assemblies. The absolute peak of my pre-college career came when I shot a local commercial for Mr. Penguin’s Tuxedo Shop for $50.00.

Then, I was accepted into the acting program at NYU’s Tisch School of the Performing Arts. I moved to NYC in 2010 and trained for four years at the Meisner and Classical Studios. I graduated in 2014.

In 2015, I met Rosie on a subway platform. She was sobbing, and initially, I tried to ignore it. When you live in NYC for a certain amount of time, it’s easy to become numb to the suffering and indignities you see on a daily basis. Then she attempted to take her life by jumping in front of a train.

The afternoon that followed is the story for our short film “Rosie” which I developed and wrote over the course of two years. Once it was completed, I sent the script to other contacts I had made through NYU who encouraged me to push forward and make the film.

Dana: I knew from a young age I wanted to work in entertainment. Many of my parents’ parties at my childhood home involved the other parents being forced to gather in the playroom at the evening’s end to watch a play I’d written and directed and coerced the other children into performing. I have always loved telling stories and connecting people through storytelling. It’s how I make sense of the world, and that’s what ultimately lead me to NYU film school and on to TV writing years later.

This is also what lead me to co-direct Rosie with Erik Kochenberger. I’ve known Erik’s girlfriend, Nicole Palermo, for years. She’s an actor, producer, and writer, and starred in my undergrad NYU thesis film. We’ve been friends ever since. She was producing Rosie – a short film based on something that actually happened to Erik in 2015 – but since he was a first-time filmmaker, she suggested hiring a co-director to help bring his vision to life since he was also starring in the film. As soon as I read the short script and heard Erik tell me his and Rosie’s story himself, I knew I wanted to come on board. It’s a story that lifted me up and punched me in the gut at the same time, and I’ve carried it with me ever since I first heard it. It’s a story about the power of human connection and community and kindness and loving others as they are. The short also explores the impact of our broken healthcare system and how many of our most vulnerable are not supported when they need it most, especially when it comes to mental illness. I think it’s a powerful and important and topical story, and I hope others connect with it in the way I have.

Overall, has it been relatively smooth? If not, what were some of the struggles along the way?
Erik: The road to “Rosie” was filled with challenge after challenge that our production team and crew were able to overcome with superhuman ability. To begin with, we had no time. With only two days to shoot 11-pages, we had to find a Director of Photography who could improvise and make last-second adjustments to a shot without letting the day slip away. We needed to shoot in a fish market, but we had no money to pay for an additional location. My producer and I called and visited every fish market we could find on Google Maps until we found one that would allow us to do it for free if we shot before they opened. Between the first and second day of filming, Dana and I had to sit down after a 5 am-5 pm workday and re-write a quarter of the script because we had lost a different location. There are a half-dozen other stories just like this, where the film could have been ruined, and our excellent team made it work. It was such an exciting collaborative atmosphere because our restraints necessitated that the cast and crew were at the top of their game, and everyone was on the same page. They came through and exceeded my expectations on every front.

Dana: Bringing Rosie to life was certainly challenging, but the incredible team made it much easier. I live in Los Angeles, and the rest of the creative team lives in New York, where we shot the film. Erik and I had to do all of our prep bi-coastally. To top it off, I’d actually only met Erik in person once before! We had to trust one another entirely and build up that collaborative relationship all over the phone and in emails leading up to our shoot. We established a rule early in our development that we were going to always be totally honest with each other, valuing communication and transparency above all else in our collaboration. His goal (and my goal) was always to make the best short possible.

For me personally, it was an exciting challenge to co-direct as I’d never done it before, and there is so much about directing that is usually about your singular vision…. But co-directing with Erik wound up being such a joy. Our crew was super complimentary of our collaborative relationship, and many couldn’t believe we’d only met once before.

This was also a low-budget short on a very tight production schedule, but I think one of the achievements of the short is that (I hope) you really can’t tell this was a pretty barebones production.

Please tell us about Rosie.
Erik: With acting and writing my instincts lead me to try to tell difficult stories. Stories that exist in a gray area, but compel the audience to derive meaning in their own words. I try to approach each one with honesty and kindness. My belief is: If it exists on this earth, then we should be talking about it and engaging in figuring out why and how. One viewer told us “Rosie reminds me exactly of my grandmother. She’s in despair, but she immediately starts taking care of Erik as a way to cope.” That’s the goal. To find facets of life that are undeniably human and present them to the audience. Hopefully, afterward, the audience asks “Why does this happen?” “Is this right?” “What can we do differently going forward?”

Dana: In my work as both a writer and director, I try to ensure everything I produce has some sort of important social, political, or environmental message. I think as content creators, we wield a great deal of power over what people think of themselves and the world around them. That’s one of the reasons I was so inspired to work on “Rosie.” Even though it’s only a short film, the story felt big and important. I think it leaves viewers with a lot of questions about the story itself, but also their own behavior and experiences. One viewer told me the film had him reeling all day, wondering how many strangers he’d walked past who he saw were clearly suffering… yet he didn’t do a thing to help them when he could have.

Any shoutouts? Who else deserves credit in this story – who has played a meaningful role?
Erik: Nicole Palermo, my producer, and girlfriend deserves all the credit in the world because this would not have been made without her encouragement and support. Whenever I doubt myself she helps me through it. My family, especially my parents Kirk and Paula Kochenberger who have supported me 100% of the way to follow my dreams. Dana, of course, deserves a ton of credit for teaching me how to make a film and enhancing the story in ways I could not have imagined. Our producer Julia Kennelly, our producer/editor Will Mayo, and our Director of Photography Matt “Rove” Roveto who were part of our core team and excellent to work with. The band “Winstons” for providing music for the film. They have incredible stuff to check out online. And lastly, our actors Teresa Yenque and Ira Hawkins. You can watch the movie for their performance alone because they will take your breath away.

Dana: I second all of Erik’s shoutouts. This film wouldn’t be what it is without our legitimately awesome team who worked hard with great attitudes despite our long hours and crazy work days. I have to say, I’ve been pretty lucky in my career so far when it comes to making long term professional and personal relationships. I’ve worked on shows across genres, everything from Big Mouth to The Colbert Report to Nightflyers (a George RR Martin horror/sci-fi series). And I’ve made some of my closest friends on those shows who I continue to love and adore and collaborate with even after our gigs ended. My career is important to me, but my friends and family are who I live for, and I’m grateful my work has connected me to so many incredible and talented folks. 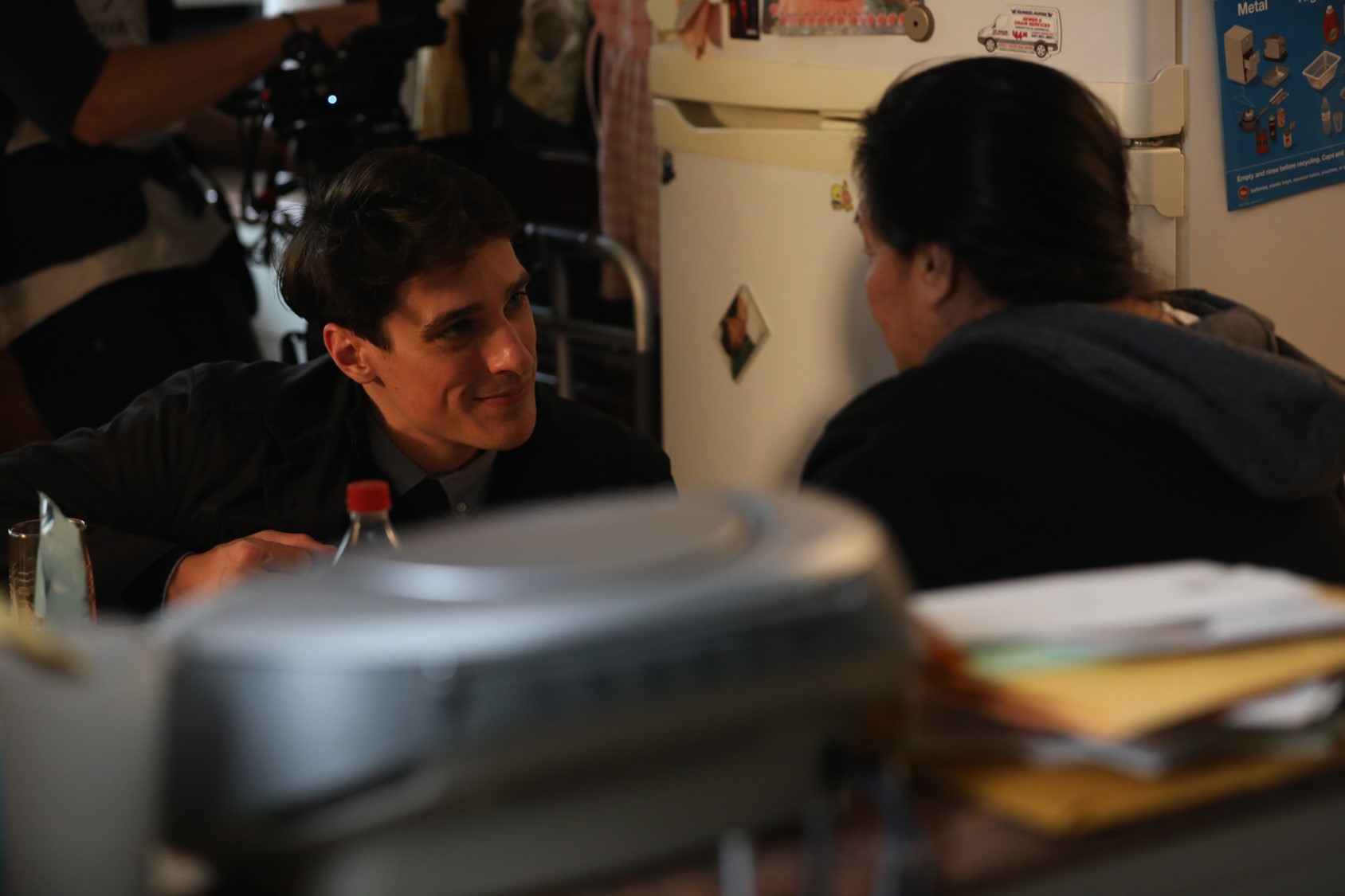 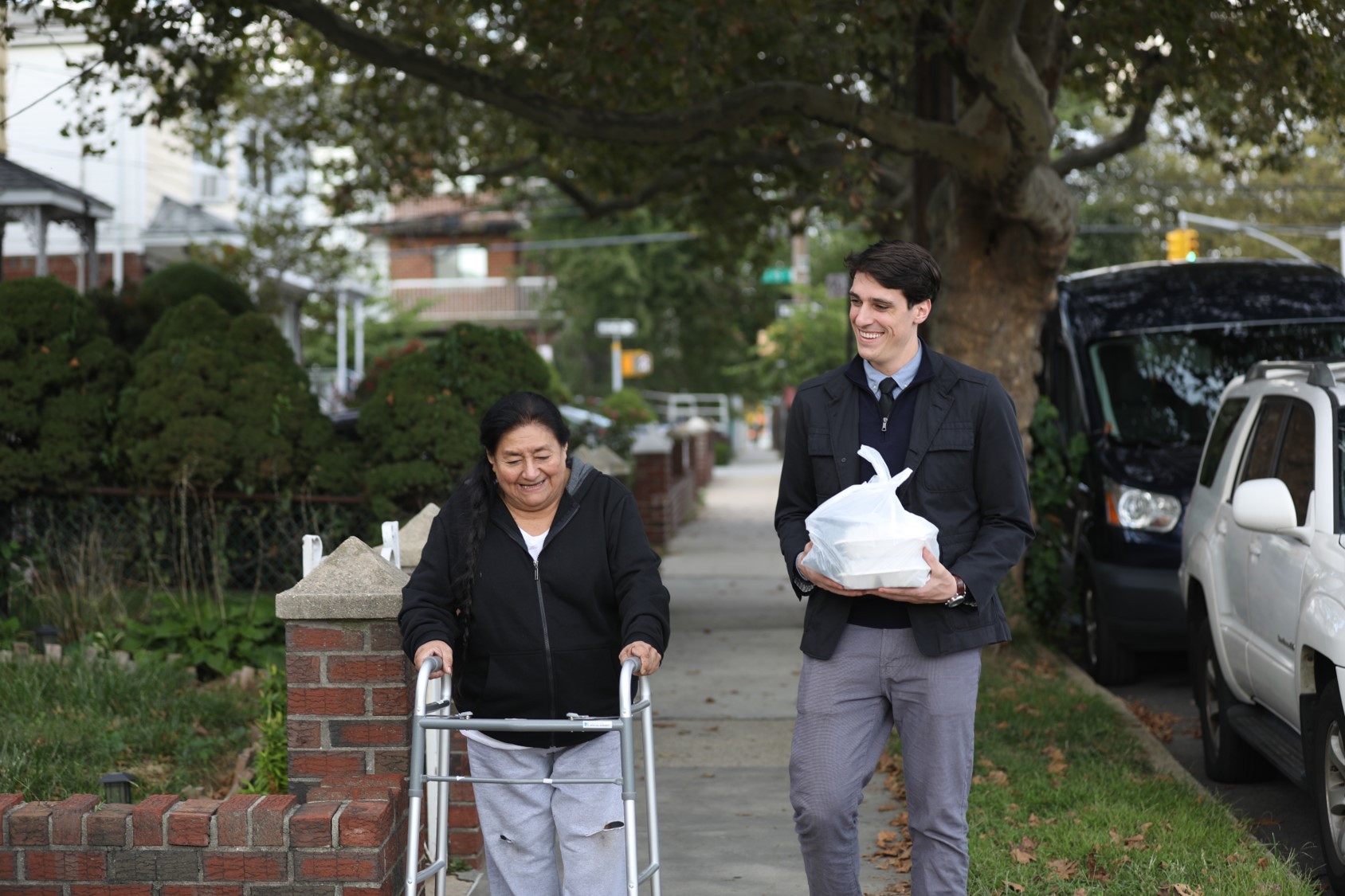 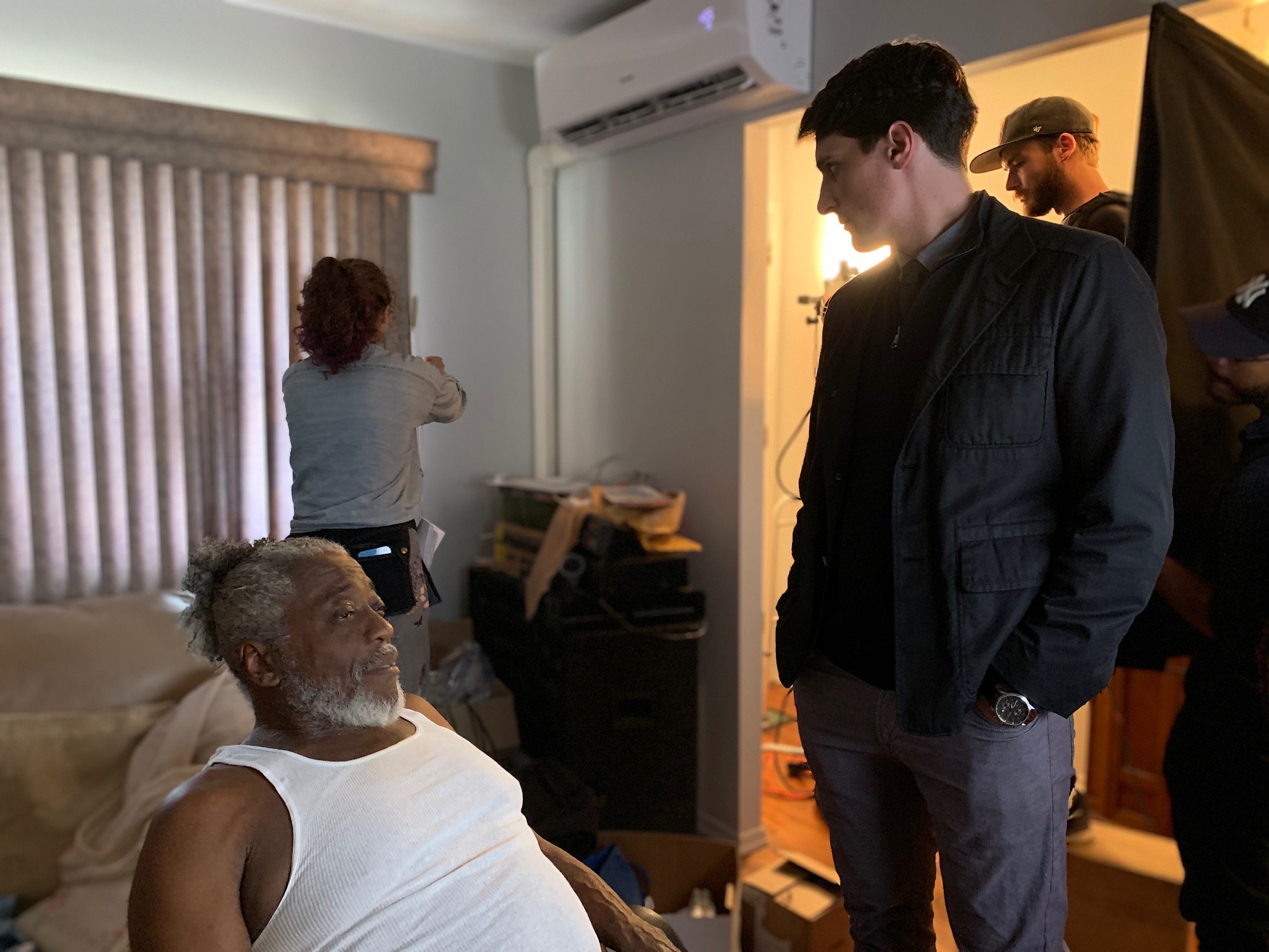 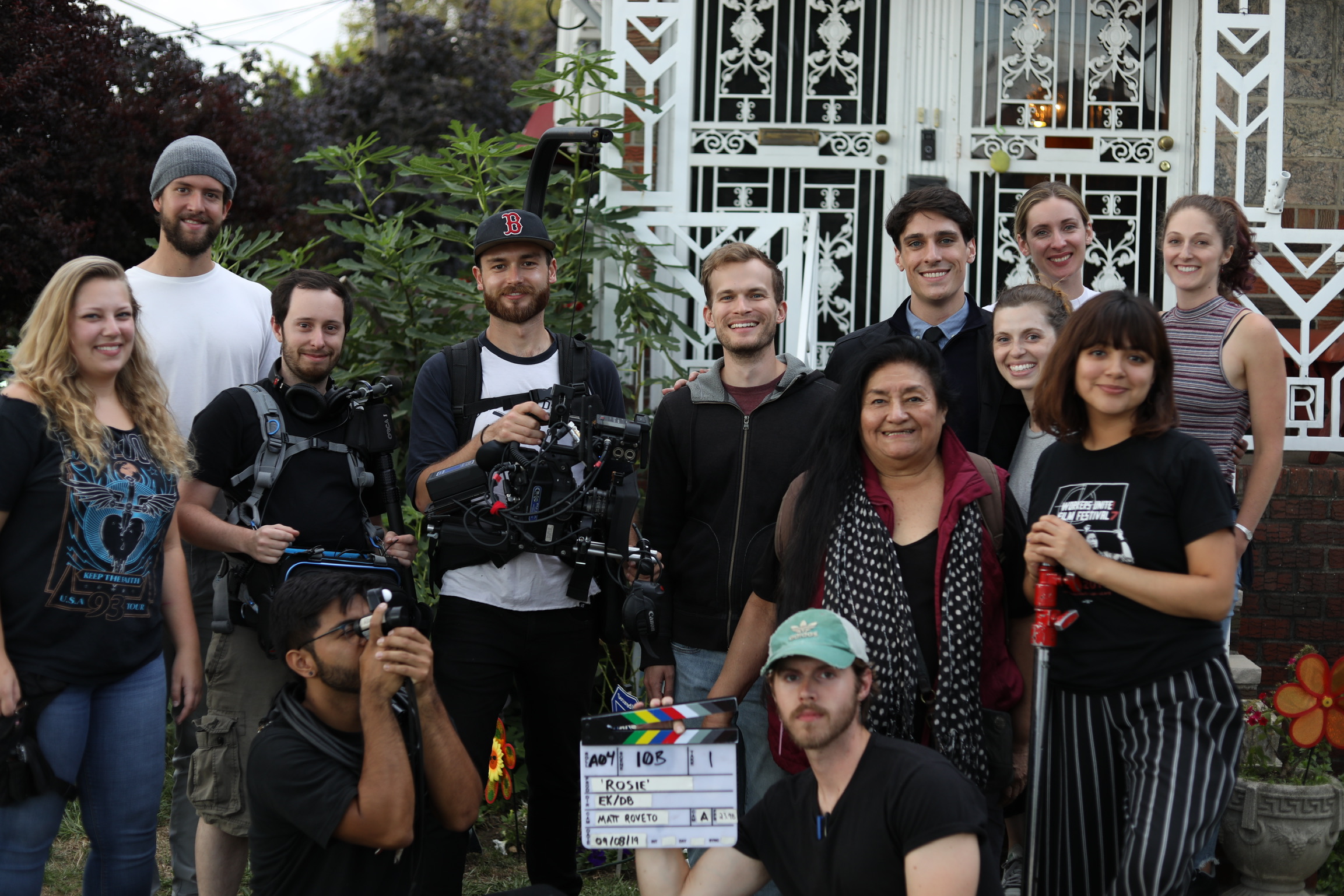