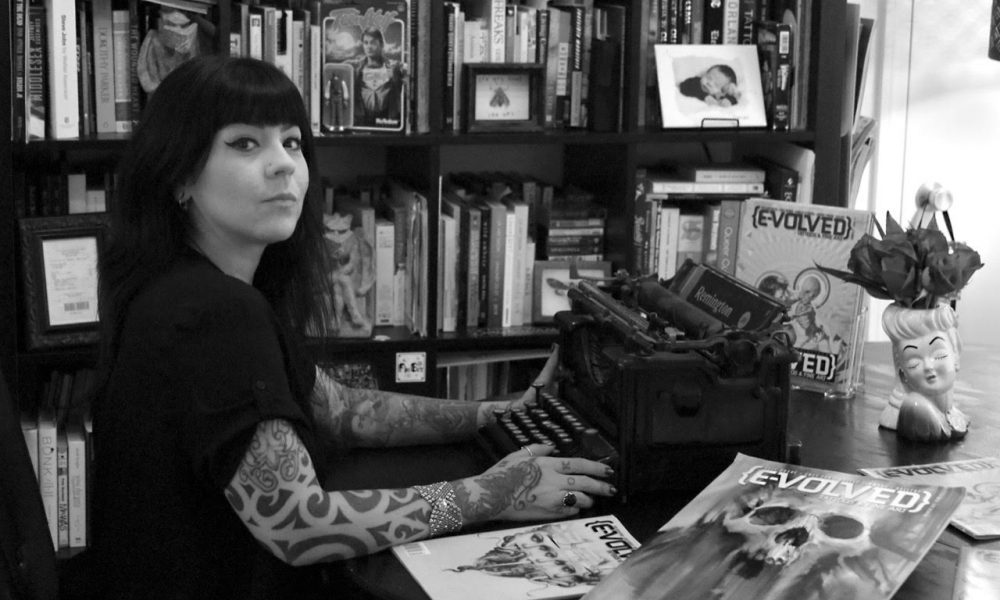 Today we’d like to introduce you to Christina Diaz.

Christina, please share your story with us. How did you get to where you are today?
I was always the quiet kid with her head in a book. Reading was an escape from reality. I considered the characters in those books personal friends. My imagination would come up with stories after the book had ended. I read as many books as I could get my hands on. I thought it was amazing how an author could create an entirely separate reality just through words. I fell in love with words, they’re quite powerful when used well. I would write my own short stories, write poetry from time to time and kept a journal. It felt good to write. Writing made me happy. It wasn’t until my Sophomore year in High school that I discovered I was even any good at it. A teacher submitted a short story of mine into a contest and I won. I hadn’t been “good” at anything so I was shocked when she told me the news. That was the universe telling me to keep writing.

I went to college, majored in English Literature and received my BA in 2004 and my MA in English Rhetoric & Composition in 2006. I had a handful of essays published in English Journals, I presented at numerous English Conferences. I was slowly building a name for myself in the literary world. I freelanced for local newspapers, entertainment publications, and independent music/art/tattoo magazines. I was fortunate enough to land a full time gig at a publishing company. For the next six years, I would write under five or six aliases in a variety of publications distributed by the company. I learned so much and thoroughly enjoyed it. I hustled my way up from filing, answering phones, and making coffee to Managing Editor of an international tattoo publication. Little did we know, print media would begin to deteriorate with digital media soon taking over the print and publishing world. They laid off 25 of us one chilly September morning. I was devastated, this had become my dream job and here I was starting all over again.

I packed up my belongings, came home and cried and that same night began to flesh out E-volved Magazine (@evolvedmagazine). I took care of the legalities first, worked on developing a logo, and laying out the debut issue. I reached out to Michele Muerte, an LA Based photographer at the time. I had published some of her work and had loved her aesthetic vibe. Her work needed to be seen. I pitched her my idea and she was in. Now years later, I can’t imagine making {E} with anyone else.

I reached out to all of the artists I had known and loved. I reached out to artists I had only dreamt of working with and introduced myself. The response was so positive, overwhelming and beautiful. We were on a mission to create an art magazine that juxtaposes tattoos and fine art. Our collective represents the evolution of tattooing as a medium and its contemporary influence on the fine art community.

We paid for the first few issues out of pocket. We were fortunate enough to land some fantastic distribution within our second year. We now have international distribution and we are currently sold at over 300 Barnes and Noble retail locations and Amazon. We are a two-woman operation, just Michele and I. I like to say we’re “D.I.Y.” because we do everything ourselves, every single thing.

In addition to creating {E}, I also curate art shows and events in my hometown of Ventura. I have been curating since 2009. I have learned so much through producing events. I love bringing people together through art whether it be through my writing or an event. The energy that is created around developing an idea and seeing it come to fruition is incredible…. And I find myself chasing that aesthetic energy through my work.

Currently, I curate the VC Art Market and the Seaside Tattoo Show. I created the VC Art Market almost five years ago. It is Ventura’s only outdoor urban art gallery. We gather every second Saturday of the month in Figueroa Plaza in Downtown Ventura, March-December. Each month over 20 local artists showcase their new work – from all genres of fine art (oil, acrylic, watercolor), origami, handmade soaps, furniture and leather goods. There is something for everyone at the VC Art Market (@vcartmarket).

Please tell us about your work.
Here is the {E} Mission Statement, I think that helps define what we specialize in and are known for. {E-VOLVED} is an international publication that juxtaposes tattoos and fine art. {E} explores the nexus between the human canvas and the more traditional canvas and how the two have become intertwined. Our collective represents the evolution of tattooing as a medium and its contemporary influence on the fine art community.

We support, promote and strive to inspire artists of all mediums and genres. At {E} it’s about what you can do with a pencil, a paintbrush, or a machine. It’s about imagination, aesthetics and ingenuity. We’re driven to educate and influence the masses one issue at a time.

What sets us apart? If you take a look at tattoo magazines out there today majority of them have practically naked women on the cover. The focus isn’t on art anymore, it’s on sex because sex sells. We’ve lost touch with the significance of art, the impact it has on people. I want to change that. Art should evoke emotion – good or bad – it should make you feel something. When you flip through the magazine I hope you can feel something, that inspires you… That’s what I hope for at least.

Let’s touch on your thoughts about our city – what do you like the most and least?
I love the diversity in our city. There’s an energy in our city that you can not replicate. Least? LA egos. 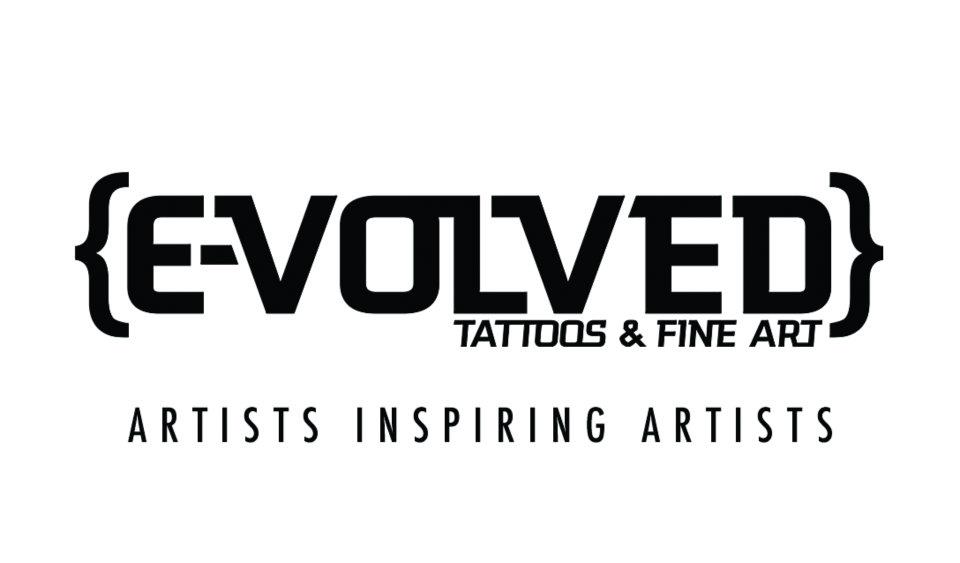 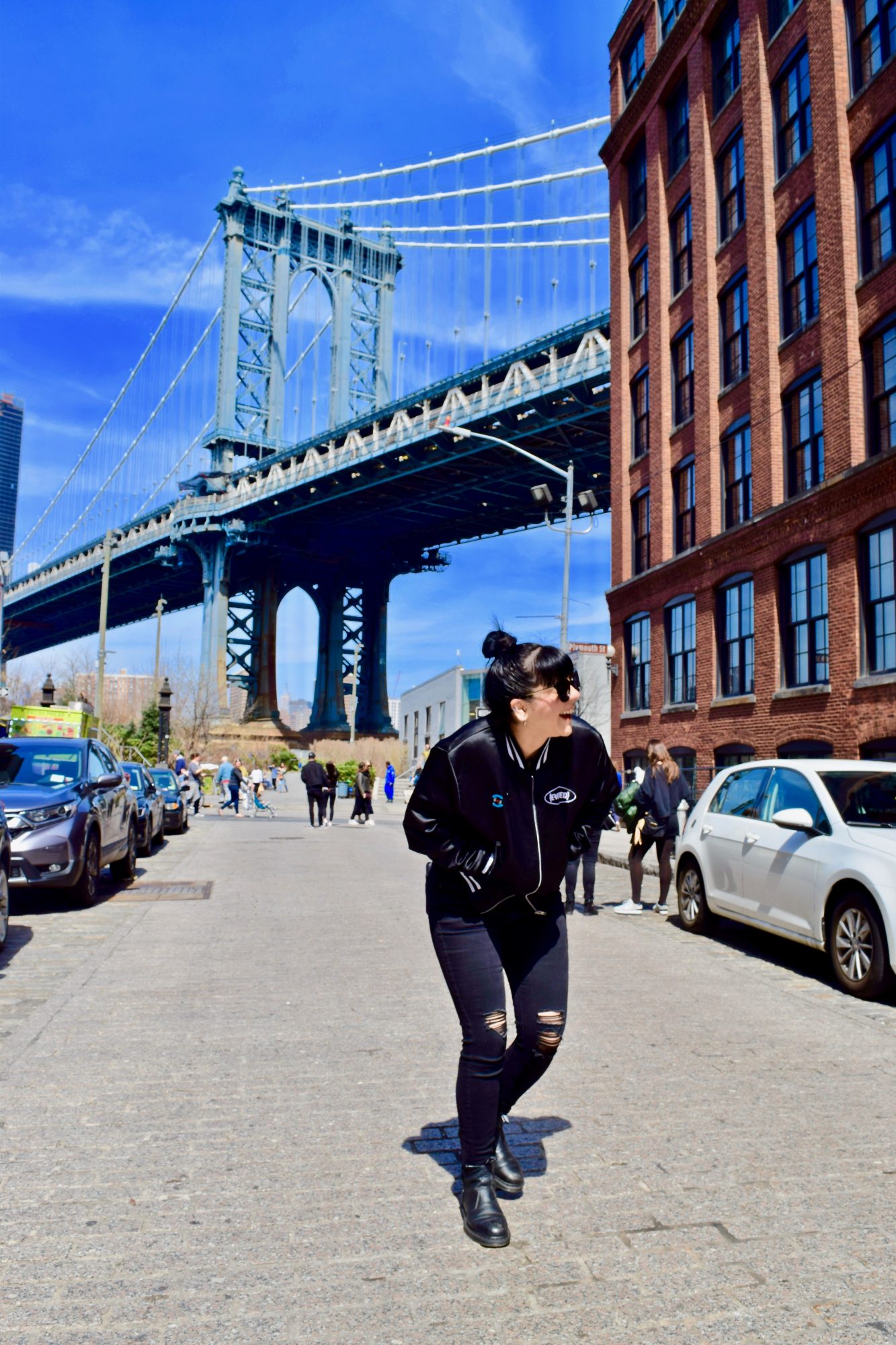 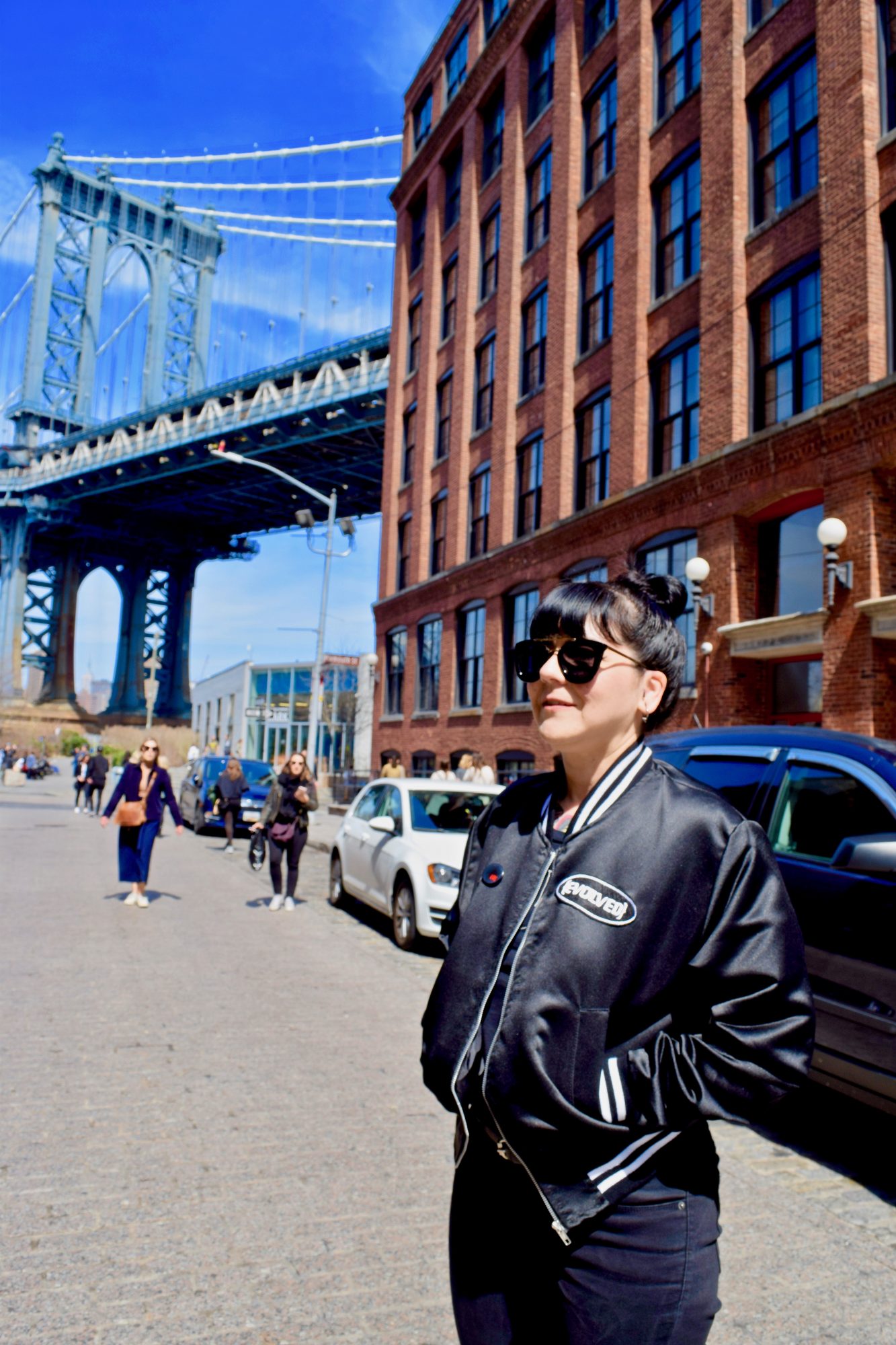 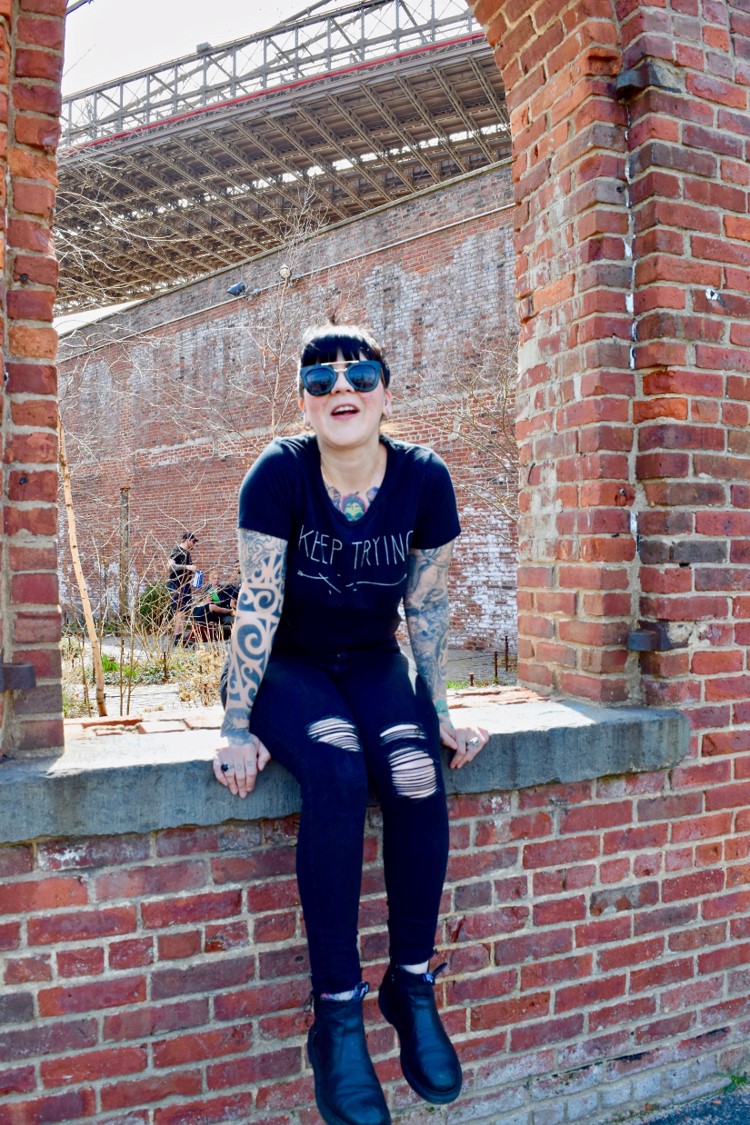 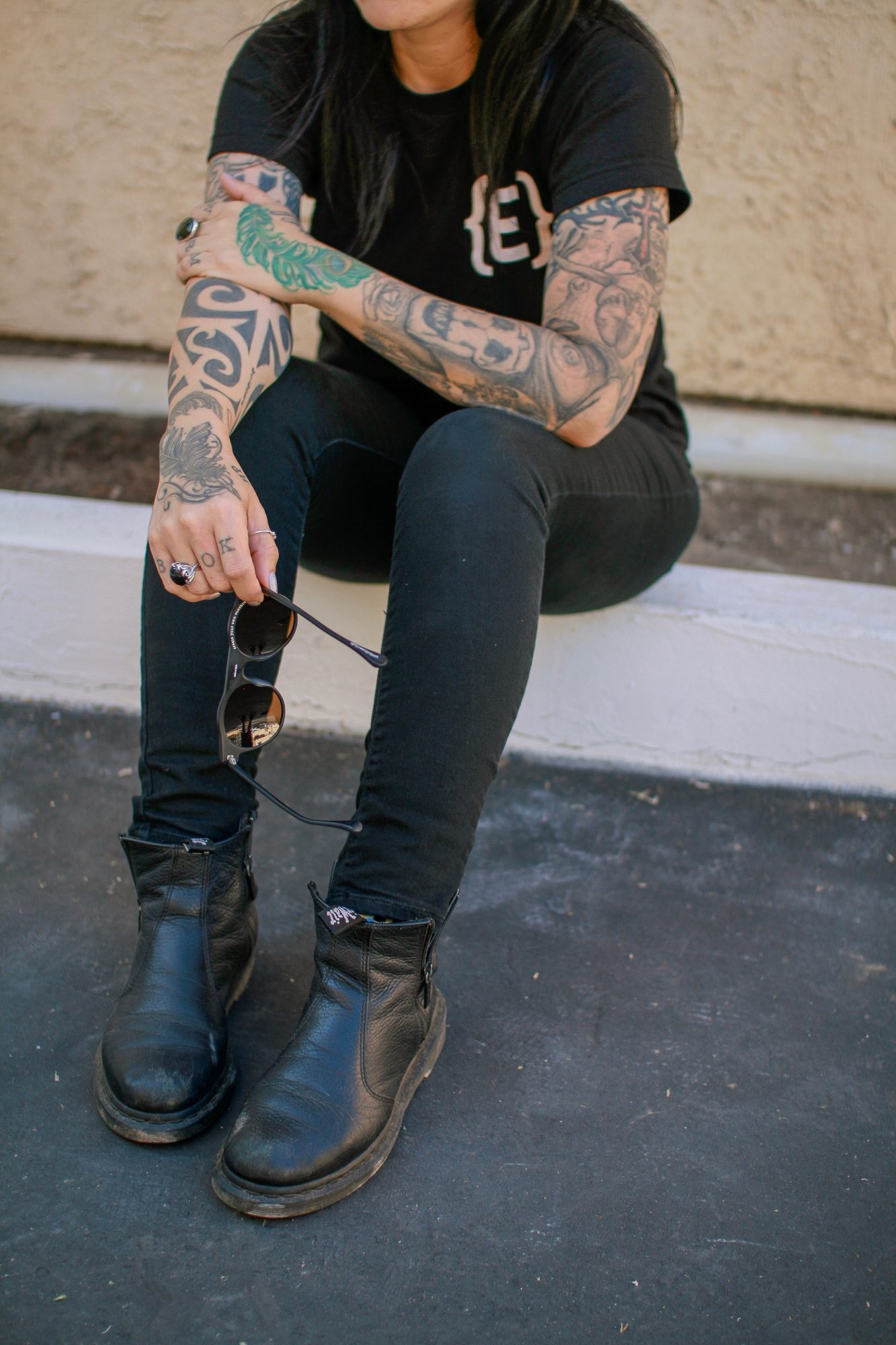 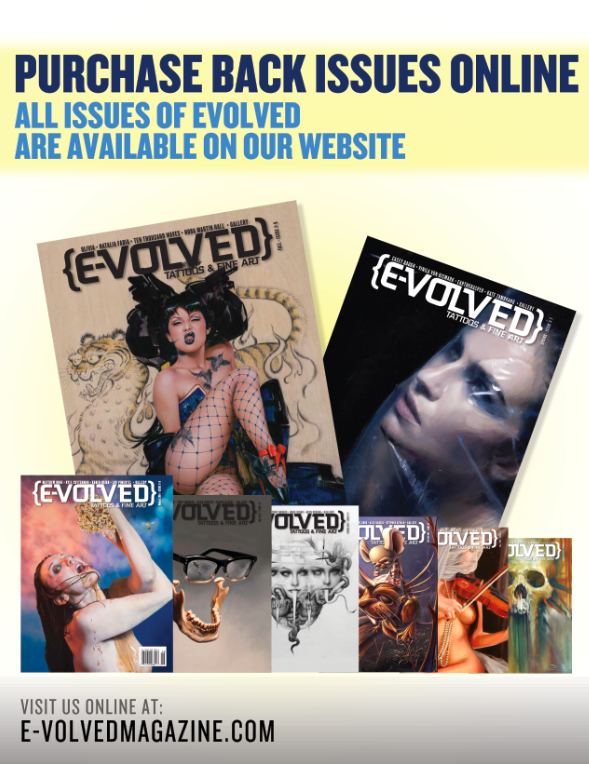 Headless photo of me: Michele Muerte