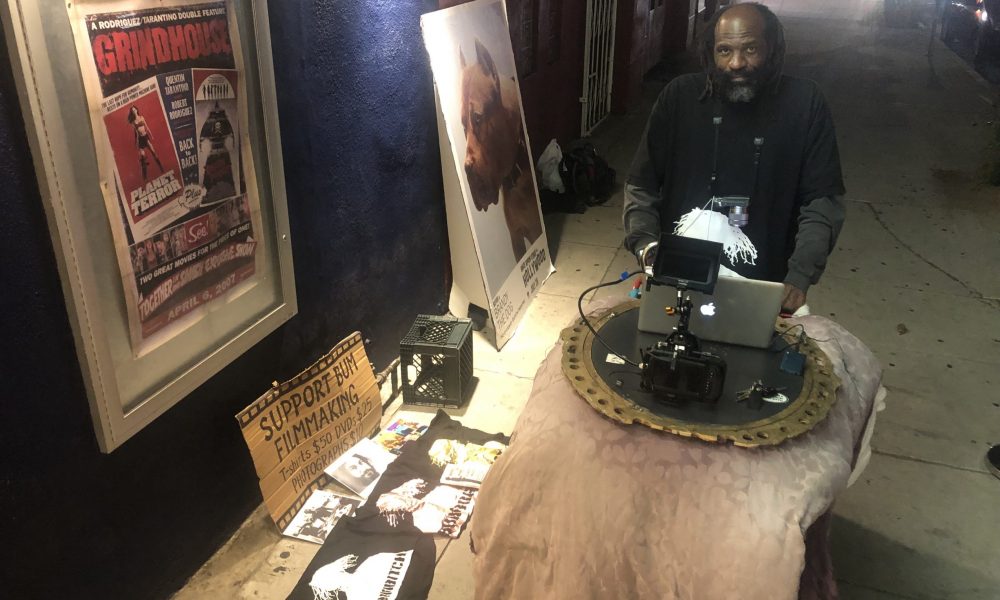 Today we’d like to introduce you to Bumdog Torres.

So, before we jump into specific questions, why don’t you give us some details about you and your story.
I grew up in the Crenshaw District of Los Angeles, best known as the “Boyz-N-The-Hood” neighborhood. Raised by a single mother, I was her only child but my father had six other sons besides me, but really it was just and my Ma. We were poor but not crushingly so. I knew what it was like to be semi-homeless living out of hotels, and sometimes eating pancakes for days at a time, but still because I was the only child I was still semi-spoiled. The benefit which I never suffered such extreme lack that it broke my spirit, where I had to do desperate things to survive. Although I saw that happen to many around me.

I busted my hip playing schoolyard basketball when I was 14. I had just finished the 7th grade, but never went back to school. I started studying on my own: history, art, literature, psychology and philosophy through my mother bookshelf and the local library.

I also grew up when gang culture began to exponentially take over the culture of the black communities. People were getting more and determinedly crazy. No eye for an eye. You beat up my homeboy, we come back and kill you. You kill one of us, we kill your momma.

What was the point in working hard and getting a house, if you could just get into an argument with some psychopath, and he comes back and burns down your house? Whoever said life is so priceless, obviously never saw anyone getting killed over a quarter.

I gravitated more and more to “wandering philosophers” Socrates Diogenes and eastern Buddhists, Taoists and Indian Sadhus greatly appealed to me. As well as American writers Steinbeck, Kerouac, Whitman, Rollins and Selby.

I was very conscious that for a black man with no education there were only going to be a few options open to me: a long life of menial labor jobs, end up dead, in jail or a bum on the streets. I simple decided on the latter.

I left Los Angeles in my early 20’s to bum around. I traveled to San Fransisco, Las Vegas and South Florida. From there, I went to England, Holland, France, Spain and Morocco. From Morocco, I was trying to get through to sub Saharan Africa but there was a war in Western Sahara at the time and I wasn’t let through. Went back up to Spain where I overstayed my visa and was deported back to America.

I had harbored ambitions of writing for a living, but I had never been published and just about everything I had ever written I had lost. In 2001, I got the idea to self publish a book on my own, with the few writings I had been able to keep. I called the book “Sketches of Nothing by a Complete Nobody”. I printed up 300 copies of it. Most of them I gave away. Then I started using them to panhandle on the streets selling them for $10-$20.

In 2004, I was sleeping in a parking lot in Downtown Los Angeles in what was newly called the “Arts District”, I was able to put on a one night, one man play I wrote and starred in called “Masterbation Theater Present” at the Downtown Playhouse. It was terrible humiliating experience. But it gave me the confidence to take the next step.  https://medium.com/@Bumdogtorres/masterbation-theatre-presents-speak-the-speech-motherfuckers-6ef2265e9b43

One day I saw someone use iMovie. I was shocked how easy it was to use. It inspired me to make a feature film, all while I was still homeless. Of course I had never seriously looked through a camera and didn’t have any knowledge of how to make a film. Which meant I started it out with a lot of false assumptions on how easy it was to make a film. For example, I thought it would only take 11 days of shooting to make the whole film….it took three years before I had finished my 2 1/2 hour feature film that I named after my book “Sketches of Nothing by a Complete Nobody: The Movie”. https://medium.com/@Bumdogtorres/bumdog-the-filmmaker-the-beginning-and-end-3432f182e506

Making that film took everything out of me, I had to get out of LA. The first place I went to was Santa Cruz for a few months before I moved to Maui to live in a swamp for three years.

My next trip was supposed to be to India, but I laid over in Thailand and missed my flight and ended up in Thailand for 3 1/2 years before they realized I didn’t have any money and I was deported AGAIN back to Los Angeles. https://medium.com/@Bumdogtorres/the-end-of-my-3-year-thailand-vacation-b243844d6fde

Back to being homeless in LA, I was inspired to start taking photographs by the photographer Vivian Maier. It was just a hobby of taking self-portrait shots in broken mirrors I found thrown away in the alleys and trash cans… After a few years a gallery in Denver, the Wandering Art Gallery, asked me if they could display some of my photographs in a show. Afterward, I started taking photography more serious.

I also began to fulfill a long held desire to make my own t-shirts. A simple silhouette of my profile with my name BUMDOG underneath. Sometimes I use different languages: Arabic, Hebrew, Greek and Thai. I’ve sold almost 200 of them over the past couple of years. People talk about creating a business around it, but I do it for fun. If I made it into a real business it just wouldn’t be fun.

Recently while Ive been living on the street I’ve been able to make another feature film called “Tarantino’s Basterds: The Homeless Filmmakers of Hollywood (A Meta Mockumentary)”. I premiered it at the Wren Theater on Vine St. I went in and asked the owner if I could rent the theater. He said sure. Then I told him “Lets get something straight right now. Im a homeless bum, and my shopping cart is parked right outside the door. Now do you STILL want to rent it to me?” He yeah, the whole thing sounded intriguing.  I like to be honest with people upfront. https://www.dailymotion.com/video/x7n4roe

Currently, I’ve just got a few personal projects I’ve got on my plate that I’d like to complete.

We’re always bombarded by how great it is to pursue your passion, etc – but we’ve spoken with enough people to know that it’s not always easy. Overall, would you say things have been easy for you?
My biggest problem has been my health. Which started with breaking my hip when I was 14, it has not only worsened over the years but eventually gave me other serious physical issues. I use a shopping cart to get around now.

But one thing that hasn’t been a problem is living on the streets all these years. People who asking me how I possible get along without a roof over my head is like one of Bill Gates kids asking how can anyone get along without servant’s quarters.

Having a place to live means nothing to me. I had a place for 2 and 1/2 years. And all I did while I had it was work, eat, watch TV, download music and porn, sleep, wake up in the morning and do the whole thing over again. I had the place that long because it was easier to keep it then let it go. But it came to a point where it was easier letting it go than keeping it….and just like that I was back on the streets. I was somewhat worried that I might be whining “Aw man, I had a place, and now I’m back on the streets.” The way I’ve seen many men do when they have a place and end back out on the streets.

Well, the first night I was back sleeping in the alley, I woke up and didn’t feel anything. They could give me a mansion to live in for a year and at the end of the year, they could kick me back out on the streets and it would be meaningless to me. I actually prefer waking up and seeing the sky and breathing in the fresh cool air.

Now admittedly waking up an seeing the sky above ain’t no fun when it’s raining. And too much fresh cool air will give you pneumonia…..but naw I’m good bro.

Tell us about your business/company. What do you do, what do you specialize in, what are you known for, etc. What are you most proud of as a company? What sets you apart from others?
You mean like branding? I used to think that was cool 10-12 years ago. I thought about starting a clothing line and just put BUMDOG on everything: T-shirts, on the back of women’s shorts, etc. I really thought it would be a kick.

But “branding” has become such a gimmick. Everybody in the creative world talks about building their “brand”. Now one of the first things people tell me is “Man thats a great ‘brand’ you got with the whole “BUMDOG” line.” And it’s just not fun anymore. Because people have become real assholes about their “Brand”. Now, every once in a while when I ask people if I can put any of my stuff in their stores, they look down their noses at me (which is a real accomplishment since I’m 6’4), and say “Sorry that doesn’t fit with our ‘brand’.”

People work on branding themselves more then they work on whatever it is they are branding themselves for. I was taking a nap in an alley once that was next to a music studio, musicians go in and out all the time when I was woken up by a women’s voice which is like fingernails on a chalkboard. Bitchin to someone about how she needs to build her brand. She is some kind of singer, and she isn’t discussing how her music is sounding, or what direction she wants to go with it, or even any type of musical influences. She’s talking….excuse me…she is BITCHIN about how she needs a logo, and better photos, and album cover art that will go well on T-shirts. I can’t get any sleep with her screeching, so I get up and push my shopping cart away. As I am passing them, I say to the young woman “You’re right you do need a brand. See this is my brand.” And I point to the BUMDOG shirt I’m wearing thats in gold with Hebrew lettering. “If I can do it, you got no excuses.”

We’d love to hear more about your work and what you are currently focused on. What else should we know?
I finished most of my film “Tarantino’s Basterds: The Homeless Filmmakers of Hollywood”. Id like to do a audio mix and color correction of it if possible. If not it will look and sound like it was when I shot it.

Right now Id like to complete a series of tutorials on movie making I call “The Bumdog School of Film”. Its for people like myself who dont know anything about how to make a movie. Im starting out with the esthetics of film and moving on to actually making a film. https://vimeo.com/179366336

What were you like growing up?
Let’s just say if you offered me one hundred billion dollars to relive my teenage years, I wouldn’t take it. 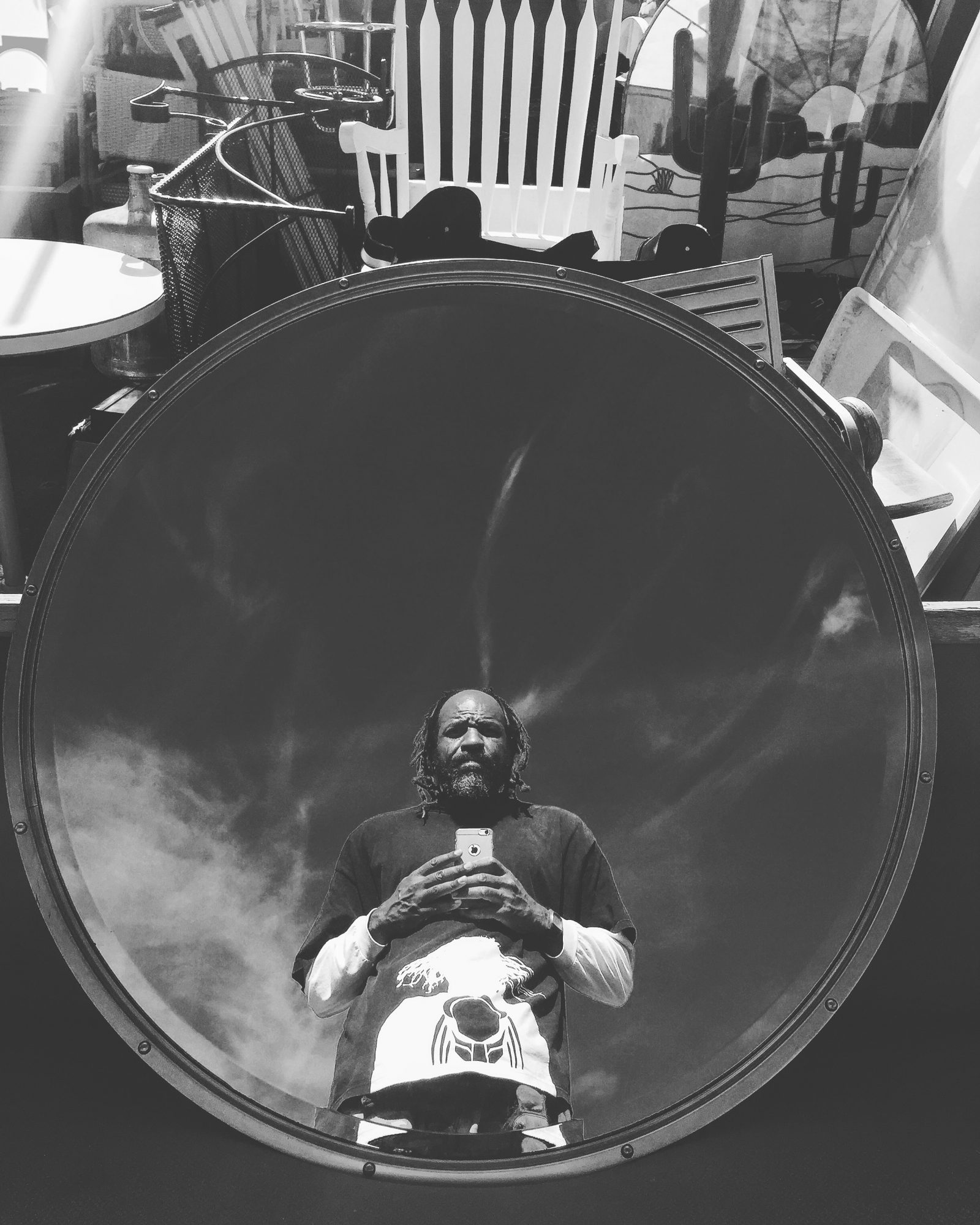 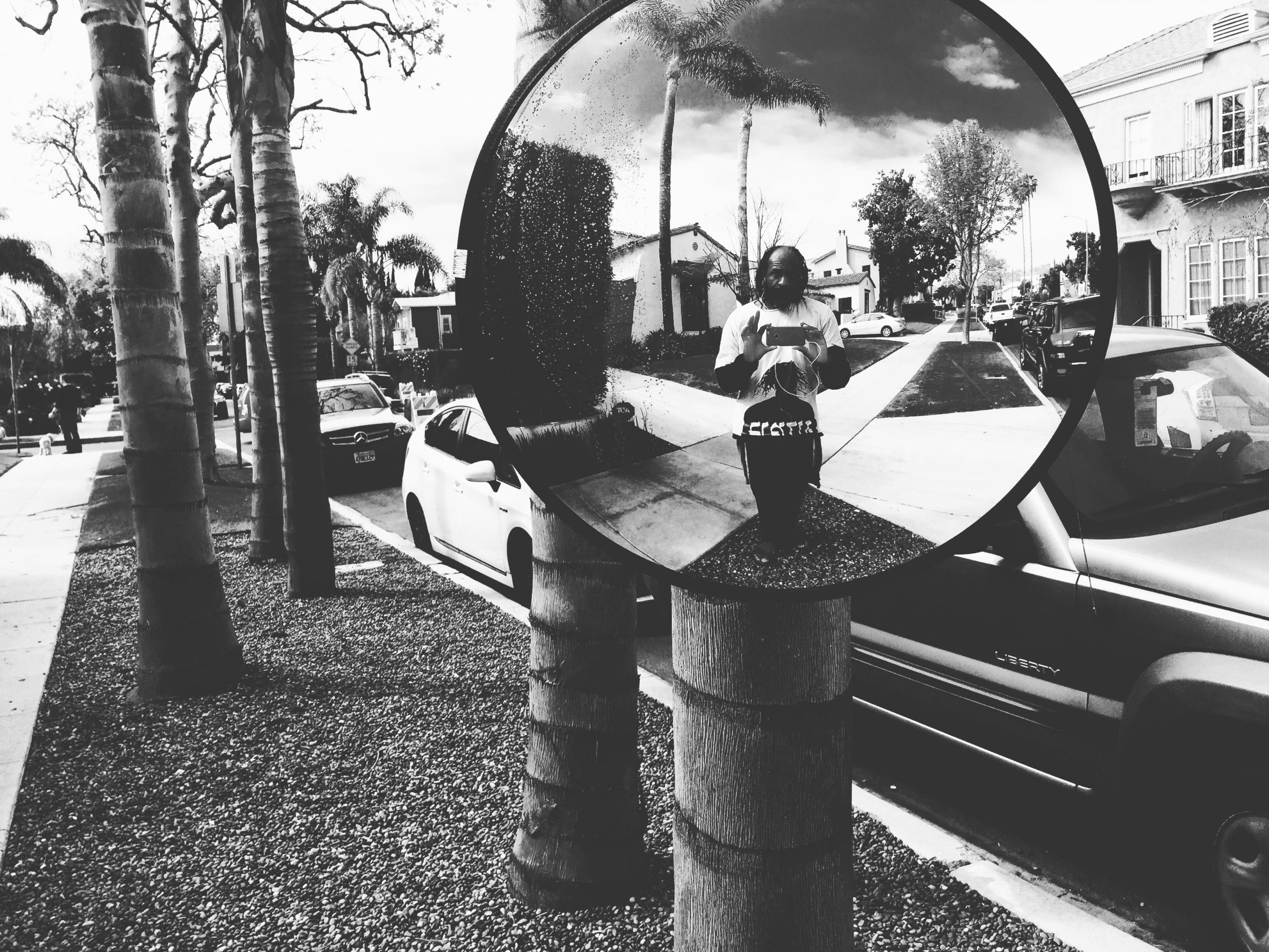 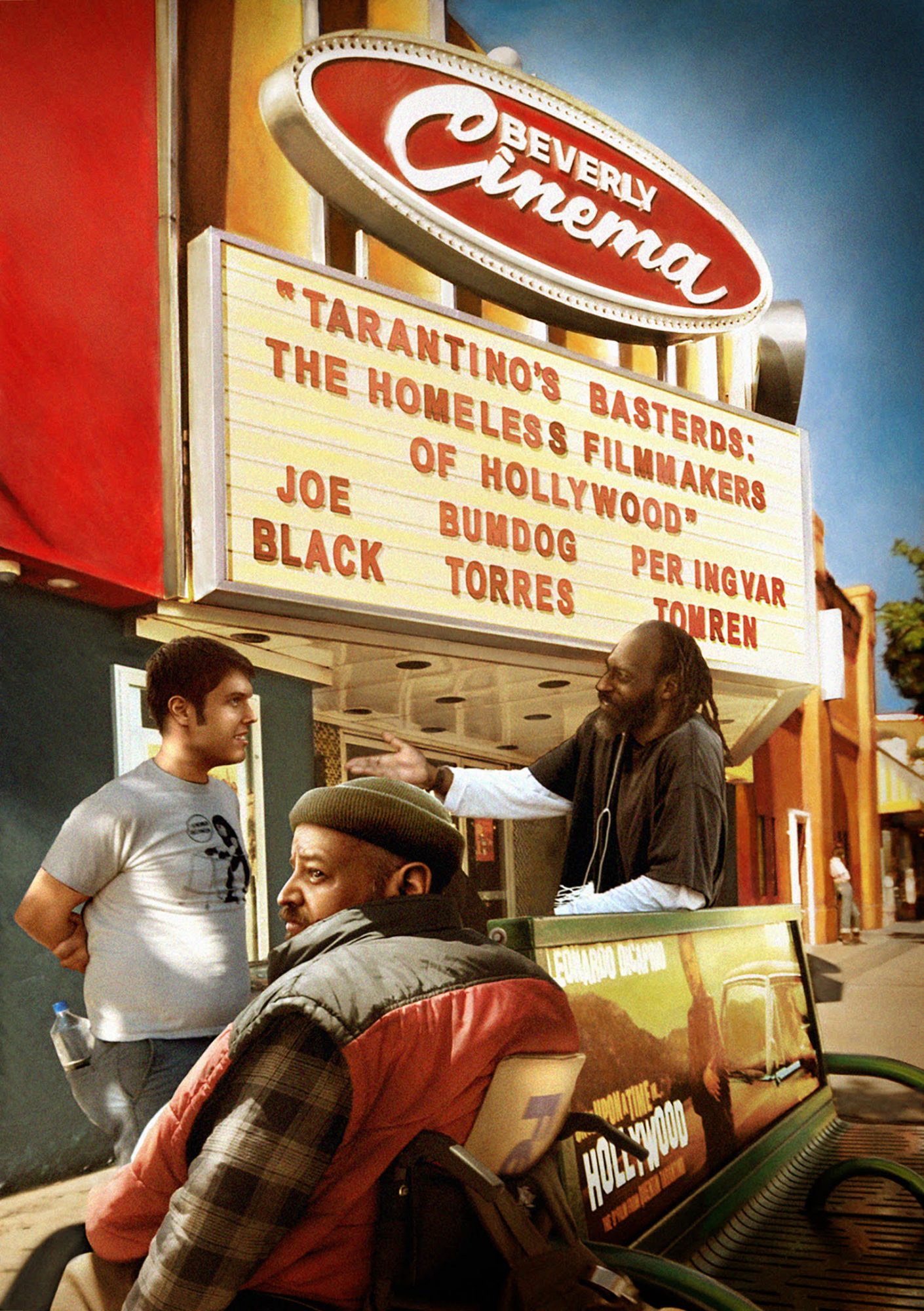 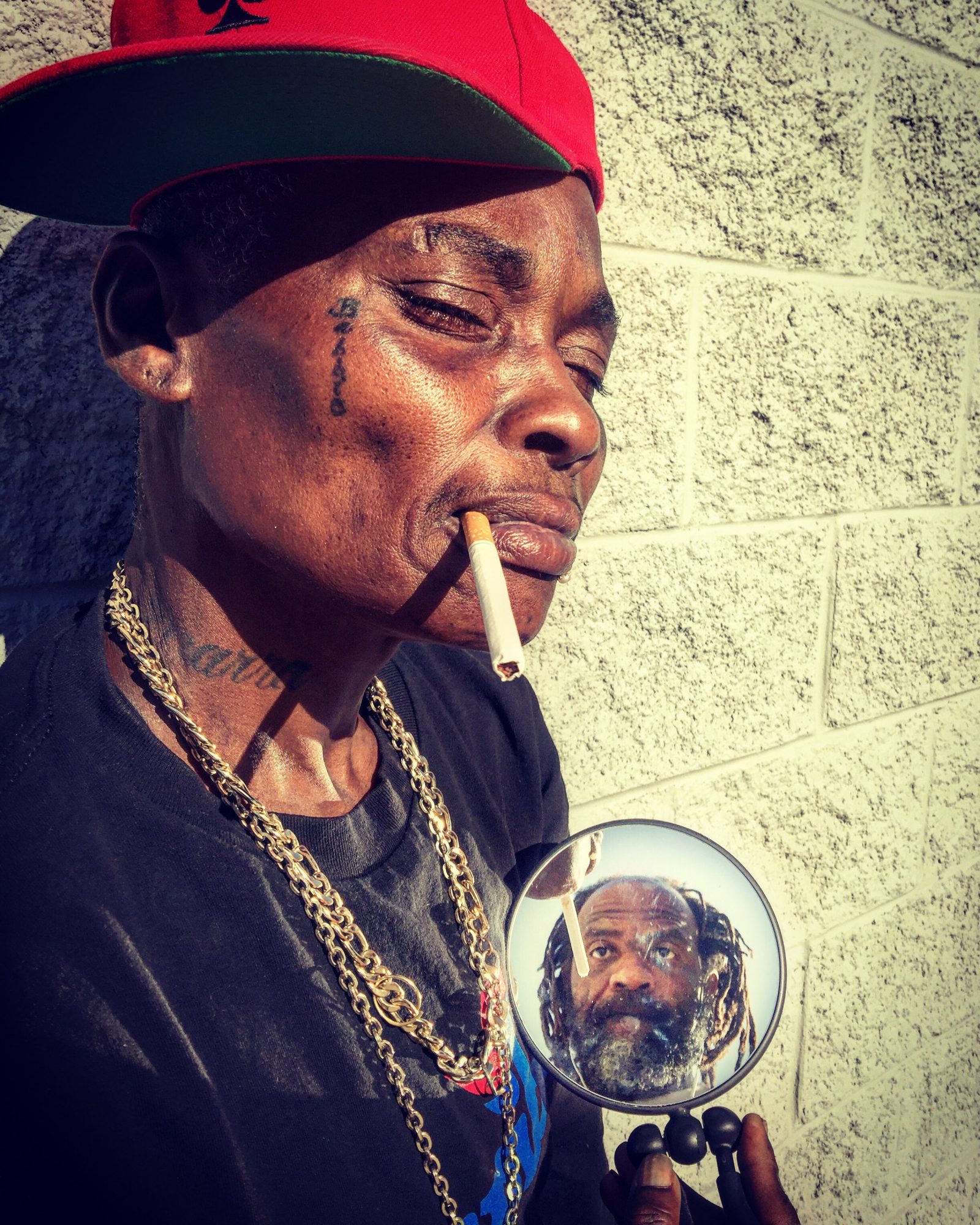 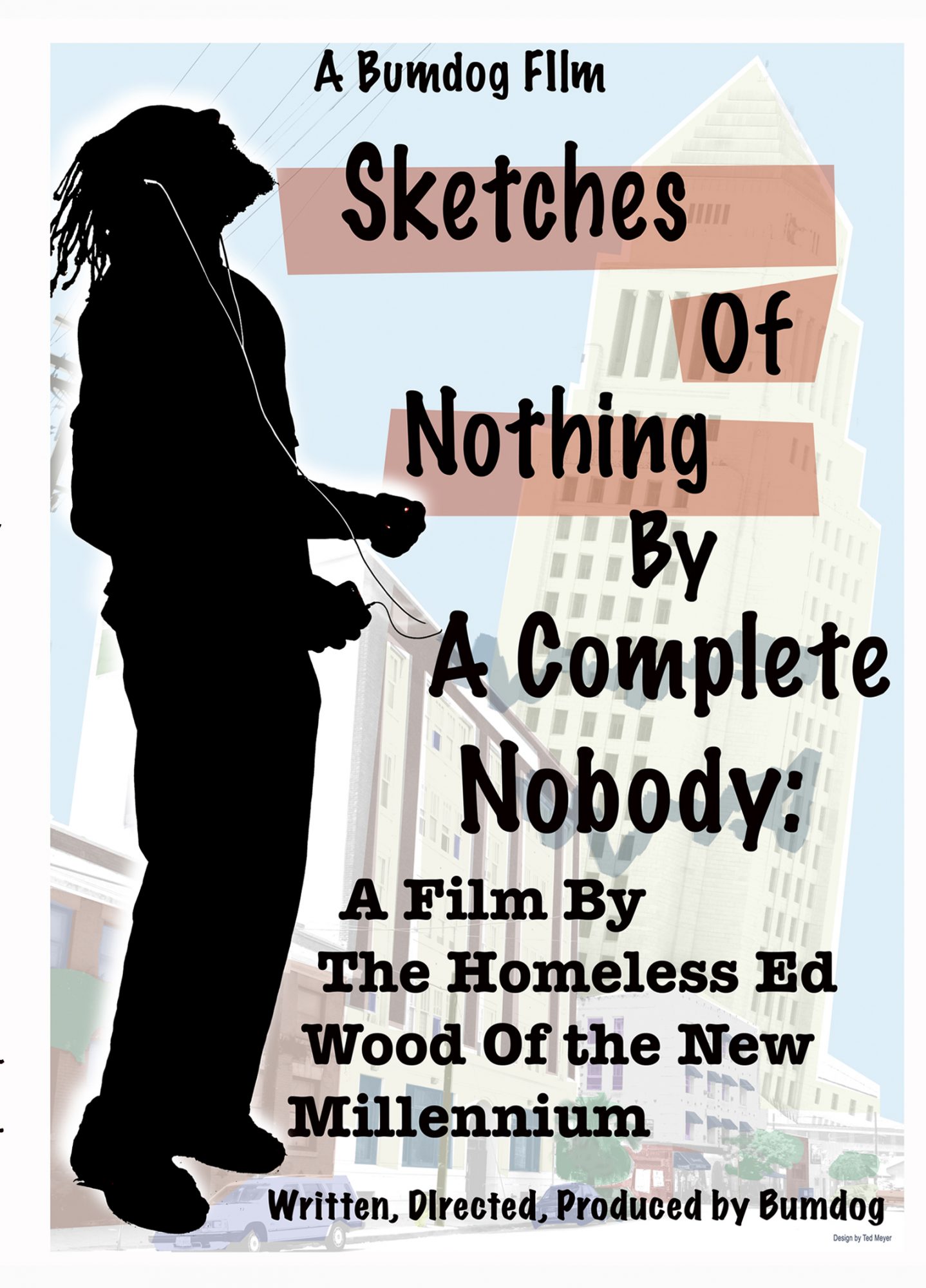 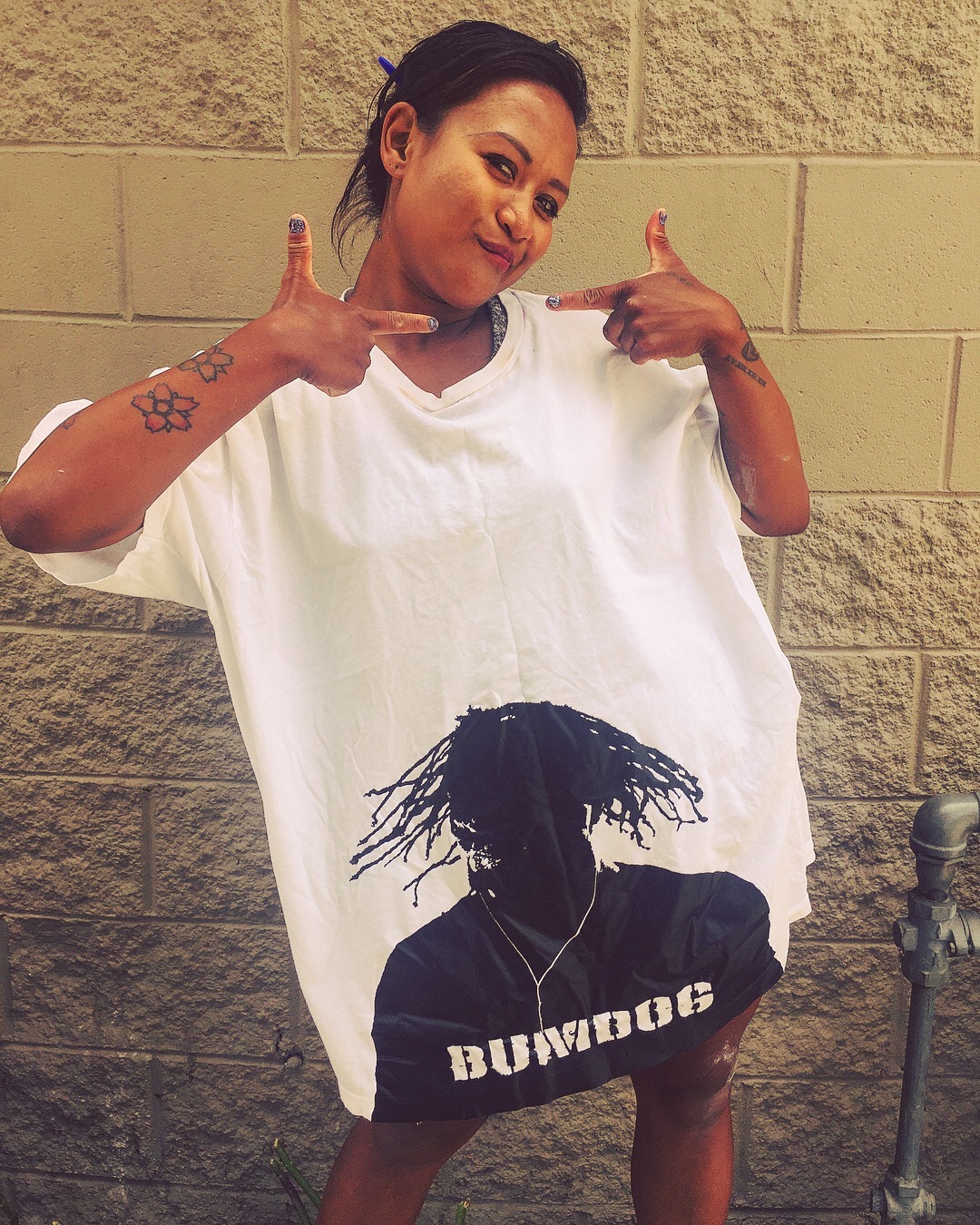 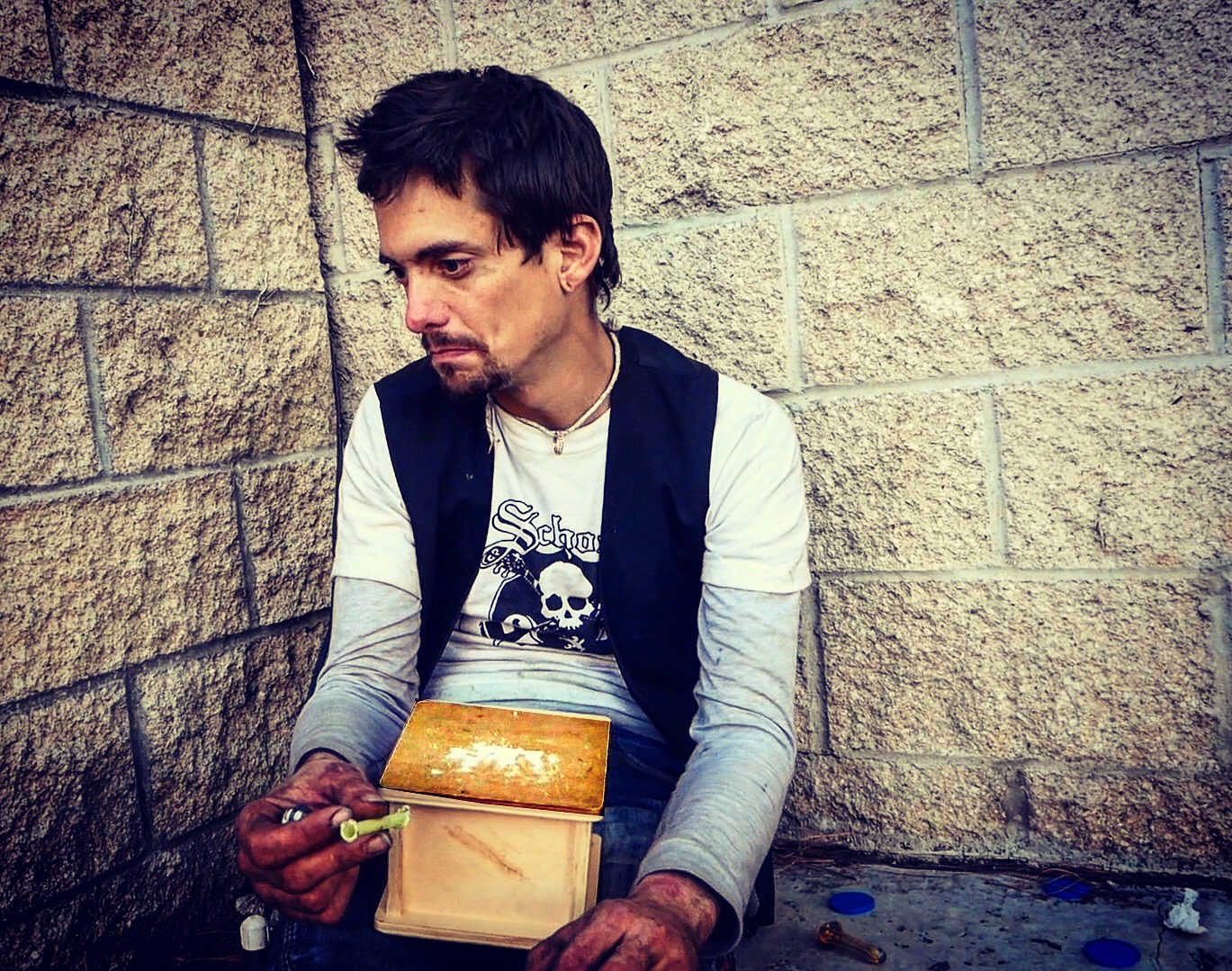 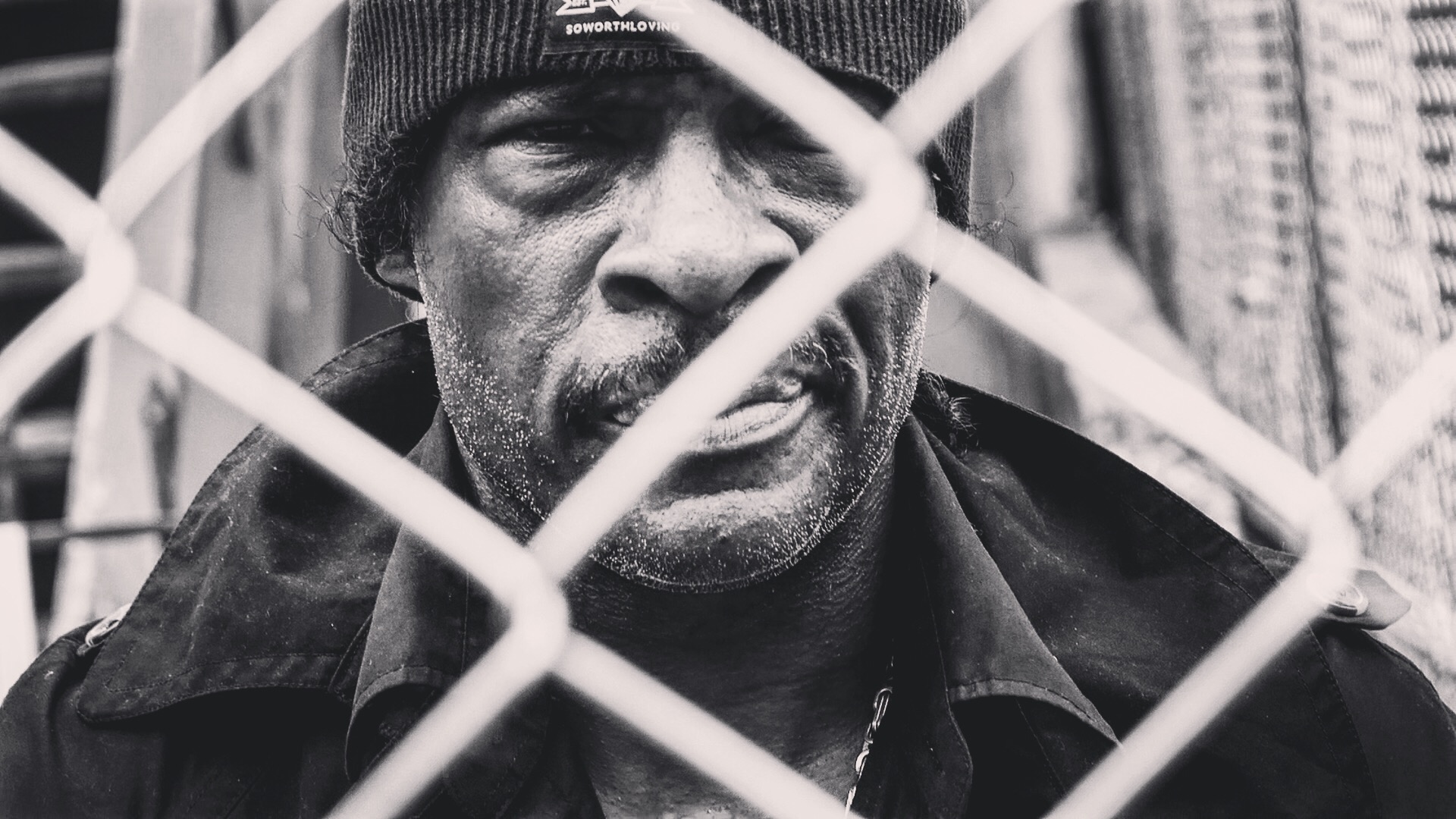 Image Credit:
Bumdog Torres filming and editing his movie “Tarantino’s Basterds: The Homeless Filmmakers of Hollywood” in front of the New Beverly Cinema, with his Macbook Pro, Black Magic Camera on his shopping cart, and a back up Sony camera around his neck.