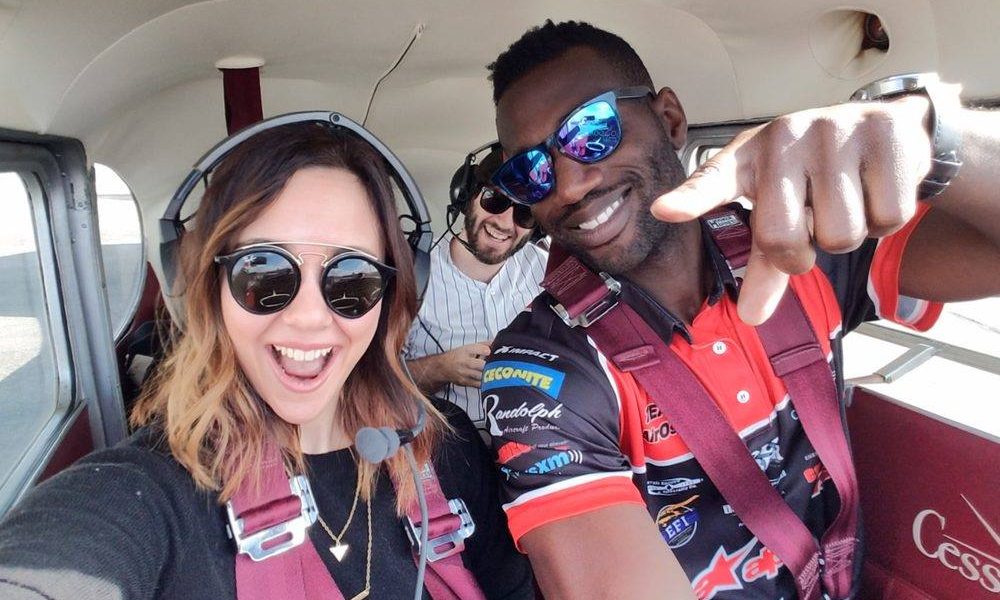 Today we’d like to introduce you to Anthony Oshinuga.

Anthony, can you briefly walk us through your story – how you started and how you got to where you are today.
My first vision of aviation was back when I was 5 years old sitting in the car which was at the approach end of a runway. We were perfectly positioned to watch airplanes fly right over the car and land. Being so young and impressionable I felt and knew as though I have stumbled into my life’s path journey. This is where it all began for me …

When I graduated college with a degree in mechanical engineering I worked for a pharmaceutical company in medical devices that engineered stents. The stents are deployed in people’s arteries to allow for unrestricted blood flow. I got hired in 2006 by Abbott Vascular and did that for a few years.

I started taking pilot lessons here and there during my junior year of college because I wasn’t playing college basketball anymore. So I hung around the airport a lot and talked to people. I started officially training in 2007. While I was training to get my licenses for aviation, I also was researching what I needed to do to create a business within the aviation industry…And then I thought about the two biggest money makers – one was alcohol…And that’s when it clicked! ‘I can partner with the wineries and create an adventure via aviation – I can do it in the airplane where I’m still fulfilling my purpose in life and enjoying aviation…That’s when AirOshi came about [an aerial-scenic touring company in Temecula, right by San Diego].

I got my license in 2010 and met this guy who was an aerobatic competitor. He was pushing out his [2-seater] aerobatic plane, and says ‘hey, I see you at the airport a lot, you wanna go for a flight?’ and I said: ‘yes, of course!’ Before I knew it, he straps on a parachute on my back, we’re in the airplane doing rolls and loops. It was crazy! In my head, I was like ‘I wasn’t doing real flying before. This is real flying! I gotta do this!’ [laughter]. The Red Bull Air races also started coming on TV. So I was like, ‘Dude, that was awesome! I want to do that too!’

The pilot Norm who took me up for my first loop and roll became my mentor in aviation…he took me through my courses; taught me how to land but most importantly how to stay alive. I have him to thank for instilling in me the fundamental part of my skills and where it is today.

With the developed skills and years of flying AirOshi was born!

We’re always bombarded by how great it is to pursue your passion, etc – but we’ve spoken with enough people to know that it’s not always easy. Overall, would you say things have been easy for you?
In the beginning it was not smooth. For example, I needed to purchase an airplane for my aerial touring business. Airplanes are not cheap. I had to make several sacrifices to afford the aircraft. There was a year that I didn’t go out to parties, bars or involved myself with extracurricular activities which cost money. This act allowed me save money and soon enough I had enough money to afford the airplane.

There are several certifications that you must obtain in order to fly passengers and an airplane. There was one particular certification that took me 4 years to receive and right before receiving it I was notified by the office that I needed an engine overhaul to stay within compliance. The engine overhaul was quoted at 25k. At the time, I didn’t have the money in the bank but I knew it needed to get done somehow some way…I believe many people would have probably gave up at this point.

There have been many challenges and struggles to get to where I am now. I’m thankful for my struggles. Without it, I wouldn’t have stumbled across my strength. At the end of the day I’m happy that I didn’t quit and kept my faith alive.

So let’s switch gears a bit and go into the AirOshinuga and AirOshi story. Tell us more about the business.
AirOshinuga/ AirOshi is an aerial touring company specializing in anniversary, wedding and adventure flights. We are particularly known for the vineyard flights over Temecula wineries. What I’m most proud about when it comes to AirOshi is the customer service.

Our Yelp reviews speaks for itself and we make sure that everyone who steps foot onboard or aircraft leaves with a smile and an unforgettable flight experience. What sets us apart is our staff, chief pilot and our ability to deliver an experience that you will have to tell a friend about.

Has luck played a meaningful role in your life and business?
I would say that I’m truly lucky and blessed. I’m always seeming to be in the right place at the right time for the opportunity. I must say though even with luck there’s still a whole lot of work to be done to see a dream become a reality.