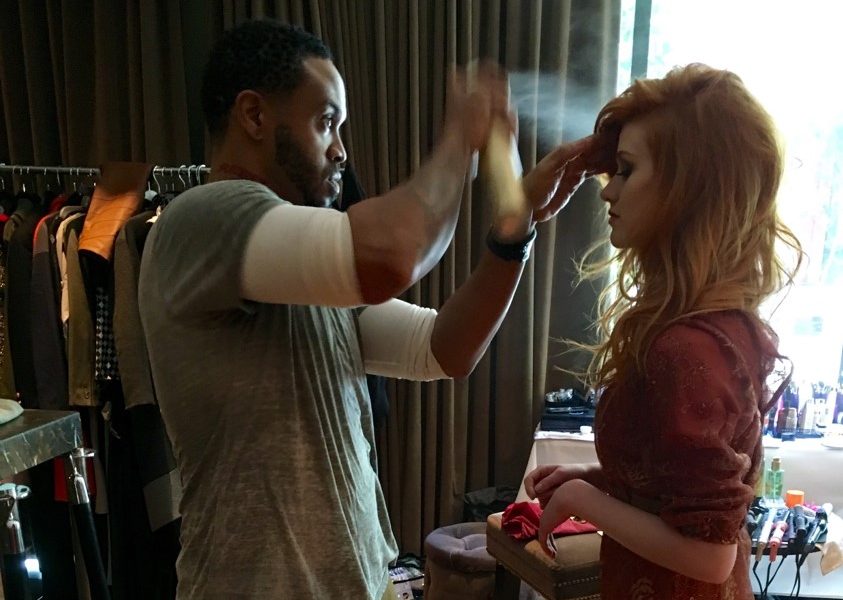 Today we’d like to introduce you to TJ Romeland.

TJ Romeland is a German-born “Army Brat” He and his family returned to North America, 3 years after his birth. The family traveled all over the United States, before finally settling in Southern, California in 1980.

By the time TJ was a preteen, he was aware he had a lot to offer, however growing up in challenging settings, he was saddled with questions of whether or not he would be able to “Deliver” on the promises he made to himself, to succeed. (TJ was his own support system at young age) But such worries were soon put to rest.

At a mere nineteen years of age, he embraced the creative talents by becoming a self-taught Barber, TJ attended Beauty School then became a Credited and Featured Hair Stylist. Shortly after turning 22 in 1995, TJ received his first agent and wasted no time in becoming a Celebrity Hair Stylist & Male Groomer. Three years later in 1998, equipped with nothing short of an incredible drive and a fierce determination to be the Best Artist he could be. TJ attended the famed Sunset-Gower/Beauty Makeup Academy located in Hollywood, California. There he became a Certified TV, Commercial, & Film Makeup Artist by the age of 25. The young artist quickly became known as the “Triple Threat” around Tinsel Town.

After working as a Credited MUA in the glowing lights of Hollywood’s Entertainment Industry, TJ decided to broaden his horizons and travel. So in 2000, he chose to pack up and move to the city that never sleeps, New York, NY. There TJ successfully becomes a MAC Cosmetics Makeup Artist @ the Famous MACY’S Herald Square in Manhattan, by the following year.

In 2001, young Romeland was drawn back to the West Coast, once again attracted by the undeniable allure of Hollywood’s Film & TV Industries. The allure, that was fueled by the success of TJ’s makeup skills in the Popular Cult Cheerleader Film, “BRING IT ON” that was shot in LaJolla, Calif. (circa 1999).

While also freelancing with ABC & NBC, TJ starting working with PieTown Productions on a few of their HGTV shows namely “Design on a Dime” & “My House is Worth, What?” w/Kendra Todd (Season-3/The Apprentice Winner)

During his years as a Makeup Artist, Hair Stylist & Male Groomer, TJ has had the pleasure of working with Noted Celebrities, such as: Sir. Richard Branson (Virgin Owner) Kelly Ripa, Spike Lee, Stevie Wonder, Tony Bennett, Tyra Banks and many more.

TJ’s also worked many Major Award Shows & Red Carpets including: The Golden Globes, The Grammys, and The Oscars. As well as working with Major Networks & Studios, including: Disney, MTV, and NBC/Universal.

The mastery of his craft “Soft Beauty” is what keeps this young veteran striving to be one of the Beauty & Entertainment Industries, Best and Finest.

“Helping people feel and become more confident about their appearances is a major reason why I LOVE, what I do. Whether I am working with Models, Celebrities, Brides, or any of my male Clientele, providing my clients with the certainty that they look their best, it’s my highest priority. Being a Multi-Faceted Artist, allows me to do that for them.” -TJR

With his creative vision and professionalism, he understands that his talents and abilities are meant to be shared, for the betterment of others and their appearances. As the industry consistently changes, TJ continues to set the standard for “Star Style & Soft Bridal Beauty”.

While on another stink in The BigApple, this time for 5 years (2010-2015) TJ kept expanding his brand and name, he also became a Member of L’Oreal/SoftSheen-Carson’s National “Style Squad” as Contracted Makeup Artist & Stylist Asst., that’s headed by Director of Education; Mezei Jefferson.

While being on the “Style Squad” TJ has been a part of “Au Natural’s” product Launch.  He was also chosen to work with Magic Shave’s Brand Ambassador: Actor, Lance Gross on the Launch of their Newly Formulated “No Razor” Shave Cream, by way of Facebook Connect Internet Marketing Video campaign (which TJ was featured in). He also, worked 2013 NYFW w/Parisian Designer, Elie Kuame and in 2014 NYFW w/British Designer, Chantell Walters.

Working hard branding himself in New York, the driven Artist was featured on TLC Network’s HIT, “SayYES to the Dress/The BIG Day” twice. First, in early 2013, then 2014.

After being seen on those show’s, TJ was also booked as Makeup Artist & Hair Stylist with TLC’s New Show “Curvy Brides”, in addition to being chosen & booking for a New TLC Bridal Reality Pilot that was “Green Lit” to become an actual show, set to Launch/Air sometime Summer 2015.

Also while on the east coast, TJ worked in Miami, So. Florida. Where he freelanced w/Premier Beauty Brands CHANEL and NARS Cosmetics, in addition to working with Agency Represented Models in Fashion Shows and Shoots. He also shot a Reality Show Pilot “Blown Away” with Show Creator/Producer; Russell LaFrieniere during the Fall of 2014.

TJ was asked back to New York City, Winter2014 to work the TLC Network again, this time as Key Makeup & Hair alone, for their new bridal show #BridesGoneStyled, also freelancing with Complex Media, Yahoo News (and other Magazines under their brand).

Then late 2015, TJ relocated back to Hollywood, CA. Doing what he loves and is best at, working with a range of Celebrities, making whoever he works with look their best in front of the camera.

In 2016, TJ worked with TLC again, this time shooting their Special: Say Yes To The Prom  with Laura Marano in Miami, Florida., He completed working on Google’s first Web Series #GodComplx for YouTube, working steadily with Actors: Malcolm-Jamal Warner, Tory Kittles, and Trevor Jackson on their respected gigs & appearances, TJ was personally requested to work on a LEXUS “Man and Machine” Commercial for 2017 SUPER BOWL w/ his long time client Lil’ Buck..

2017 is off to a great start, with just wrapping up a Nike/AirMax 2017 Commercial, along with shooting a SPOTIFY/Complex Media Produced-Video Series soon to be released.

Has it been a smooth road?
My God, NO  it hasn’t always been a smooth road (there’s no such thing, as a Smooth Road in Hollywood). I realize my walk has been very different and more challenging from most that just stick to 1 thing. And once they become great at that one thing, most ride that 1 thing, out.

That isn’t my story, I knew early on that my interests were never Singular. I’m actually extremely proud of all that I’ve accomplished starting out a self-taught Barber, then becoming Trained Hairstylist and lastly becoming a Certified Makeup Artist, all by the age of 25.

Many of the challenges I faced was nonstop having to prove myself and that I’m, first capable of doing 3 different professions, but also could I do them well and fast. Honestly, that’s proved stressful many times and in many ways.

But I never gave up!… I began to master my confidence, my skills, my timing and proficiency to do what was needed and what I was being hired for. (to this day I STILL find excitement and joy in it.)

Early on, I realized that there are so many degrees of Artistry in Entertainment. I had to find my own lane and discover what MY purposes were in this Exciting and Scary Universe which is “The Entertainment Business”

Yes, I found myself admiring others Careers & Career Moves. But I clearly knew that I could not mimic others “Walks” or “Paths” I had to create my own. Which I did, proudly.

Getting into my Union (IATSE Local 706) was an 11year struggle for me, it was not easy by any respects… Even after getting into this Illustrious Union, there’s even more struggles progressing in it, to this day. (All Truth!!)

But, this is the “Big Leagues” and if it were easy, everyone would be in it and that’s just not how it works in Hollywood… HOLLYWOOD/SHOW BUSINESS isn’t for the timid… It is Very Much a BUSINESS folks…

So let’s switch gears a bit and go into the TJ Romeland story a little more.
TJ Romeland is the epitome of Season Artist.

TJ is known for being “The Image Guy” in Hollywood, New York & Miami, respectfully.
His abilities as a multi-faceted Artist allows him to shift his skill set at a moment’s notice. He enjoys being capable of enhancing anyone appearances in all forms of media, wherever a production takes him. He has his sights on a few overseas markets next.

What TJ is most proud of, is in his 20th Year as a Professional Artist (2015) when he lived in New York, after being featured twice on a popular Bridal cable show on (TLC’s “Say Yes To The Dress”) The Networks Producers chose TJ to shoot a pilot, which ultimately became the 1st Season of “Brides Gone Styled”..

On that show, TJ was a 1-Man Beauty Team for the Show’s Hosts & the 8-Bridal Transformations, doing both Makeup and Hair Styling, at the same time. Being handpicked for this gig, brought everything full circle for the Artist…

What sets TJ Romeland apart from others, is his diverse past and immense experiences (in TV, Film, Commercial, Print, Red Carpets, Internet Marketing, Fashion & PR), his 3-Part Professions, his undeniable passion, and lastly his drive to consistently stay relevant in Media, Today.

How do you think the industry will change over the next decade?
In the next 5-10 years, I see Entertainment going into more personalized content and choices, with all forms of Media shifting more and more to social platforms, it just screams GROWTH. That also means more work for more talented creatives in the world. That seriously excites me, because I love being a part of most creative processes or mediums.