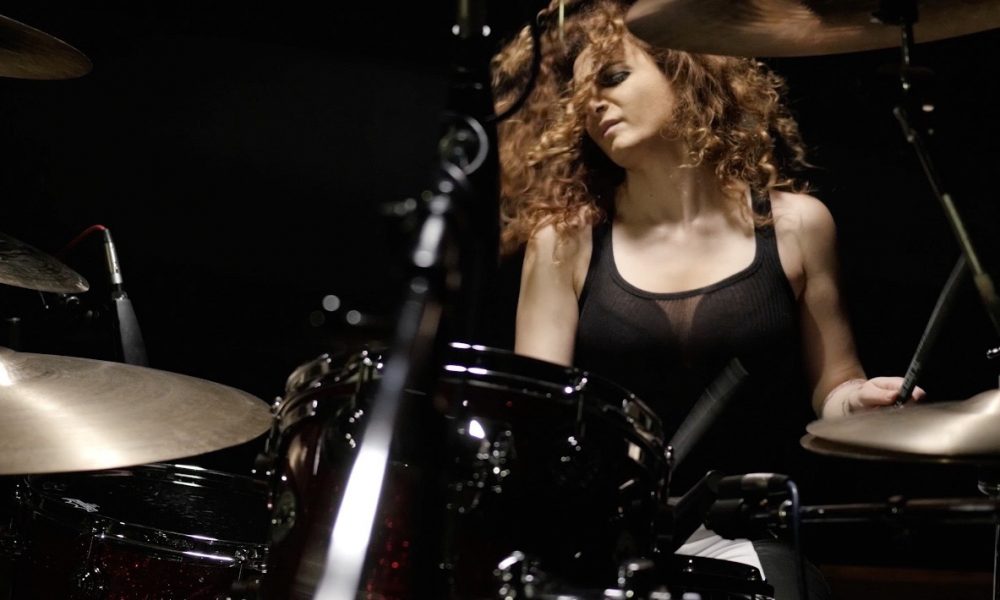 Today we’d like to introduce you to SoZo Diamond.

SoZo, can you briefly walk us through your story – how you started and how you got to where you are today.
I started off playing guitar at ten years old. I remember watching Lenny Kravitz on TV playing and it just inspired me to pick up a guitar. I asked my dad for a guitar and he told me he had plenty of guitars stored in his closet. I was born into a musical family, but at age ten I had no idea that my dad played guitar because I rarely saw it around the house. He eventually showed me all his guitars and taught me my first song, ‘The House of the Rising Sun.’ I would practice that song every single day until I got it right. Then, a couple of years later I became interested in playing the bass guitar. I would write my own music and look for bands to play with. I eventually found musicians and would play locally (in LA) as a guitar player.

At age 16, the drummer from my band quit and it really upset me. I was heavily invested in the band and I started writing music on my own. I remember jumping on my ex-drummer’s drum set and realizing how natural it felt for me to play. He looked at me and said, “have you been practicing on my kit after rehearsals?” I had not been, and it just flowed with me. Eventually, I got a drum practice pad that year and would not stop playing on pillows and my drum pad for hours on end every single day. I figured, if I learned to play the drums, then I wouldn’t need a drummer. I wrote and recorded my own music, and played all the instruments on my own recordings. What initially started as a way to become self-efficient as an artist, ended up taking over my life.

I fell in love with drums and eventually got my first kit that year (a vintage Rogers kit my uncle let me use). I would play alone for hours in my family’s studio (Pacifique Recording Studios) every single day, frequently pulling all-nighters because I could never get enough of my drums. I eventually stopped focusing on playing guitar and heavily focused on improving my skills as a drummer. I was never coddled because I was a woman in my family, I was always given the harsh truth about my skills as a drummer and constant constructive criticism. My father and uncle were musicians and never held back their thoughts, which I think pushed me and still pushes me to become a better drummer.

When I graduated high school, I did not go to music school. I took a few courses and realized I did not want to study music at school and would prefer to do it on my own. I was also interested in expanding my mind in different avenues. I studied psychology at UCLA with the goal of getting my Ph.D. in Clinical Psychology. I continued to drum during this period of time in my life, but I was focused on my studies. During my senior year at UCLA, something changed. My grandfather died in a horrific way; he was in a car accident and burnt alive, trapped in his car while people just watched. This made me really question my life and brought on thoughts of mortality. Am I really doing what I want to do in life? If I died tomorrow, would I be happy with the life I lived? The answer was no, my heart always belonged to music.

I decided to finish off my degree, and immediately put 100% of my life and efforts into becoming a touring drummer and having a career as a drummer. I got a part-time job at a Pilates studio straight out of college and did everything I could every single day to get closer to my goal. I released drum videos on YouTube, played in bands all over Los Angeles, and eventually quit my job at the Pilates studio to move to Vegas for a full-time drum gig. After that gig didn’t pan out as I wanted it to, I moved back to LA in 2015 in hopes of finding my dream gig. I eventually was contacted by Billy Gibbons (of ZZ Top) to be his touring drummer in support of his album ‘Perfectamundo.’ This opened the doors for me in many ways and was the moment I felt that my dream became a reality.

We’re always bombarded by how great it is to pursue your passion, etc – but we’ve spoken with enough people to know that it’s not always easy. Overall, would you say things have been easy for you?
Being a woman in a male-dominated industry is especially difficult. I would not be considered for gigs just because of my gender. People in the industry would assume I would not hit my drums hard just because I’m female, or wouldn’t even consider to look at my material just because they wanted a man in their band. I spent a lot of time and effort into becoming a hard-hitting drummer, and anytime people would watch me perform live, I made it a point to make sure they realize how powerful my playing was. It was a long road of countless hours of practice, numerous auditions, and constantly trying to find the drive and inspiration to push forward.

Please tell us more about your work, what you are currently focused on and most proud of.
I am a professional drummer. I specialize in rock/metal/blues/pop music. Live, touring, recording sessions, video shoots, and lessons. I am also a producer and audio engineer based out of my home studio (SoZo Diamond Studios). You can find specifications on my website (www.sozodrummer.com). I’m most proud of always giving my all to any project I am involved in, caring about quality over quantity, and always being honest. Music is my heart, and I will dive into projects and make it my life.

What were you like growing up?
Growing up I was interested in music, listened to metal, loved animals (especially my dogs), and watched a ton of horror movies. I never felt accepted because my interests were different than the typical girls at school. I didn’t care about girly things and just wanted to play music.

Once I became engulfed in music, I became more confident, outgoing, outspoken, and rebellious. I would say being a drummer made me an extrovert. 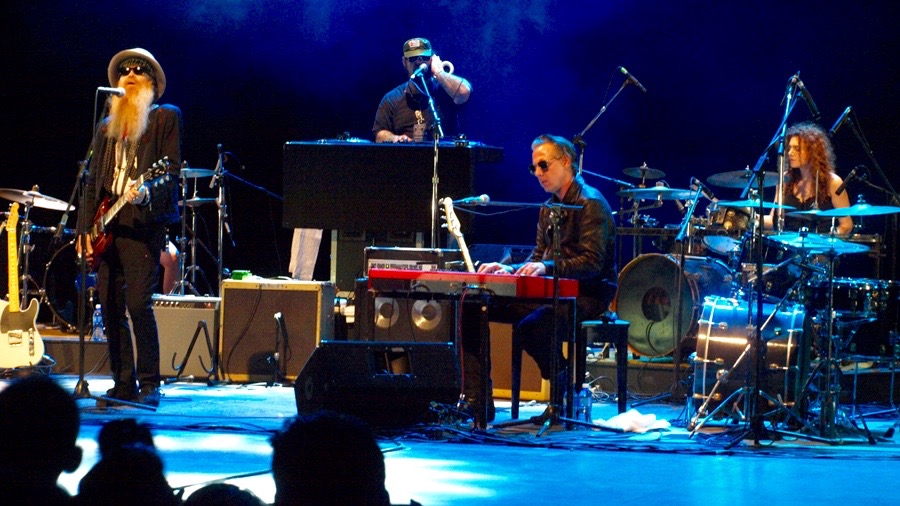 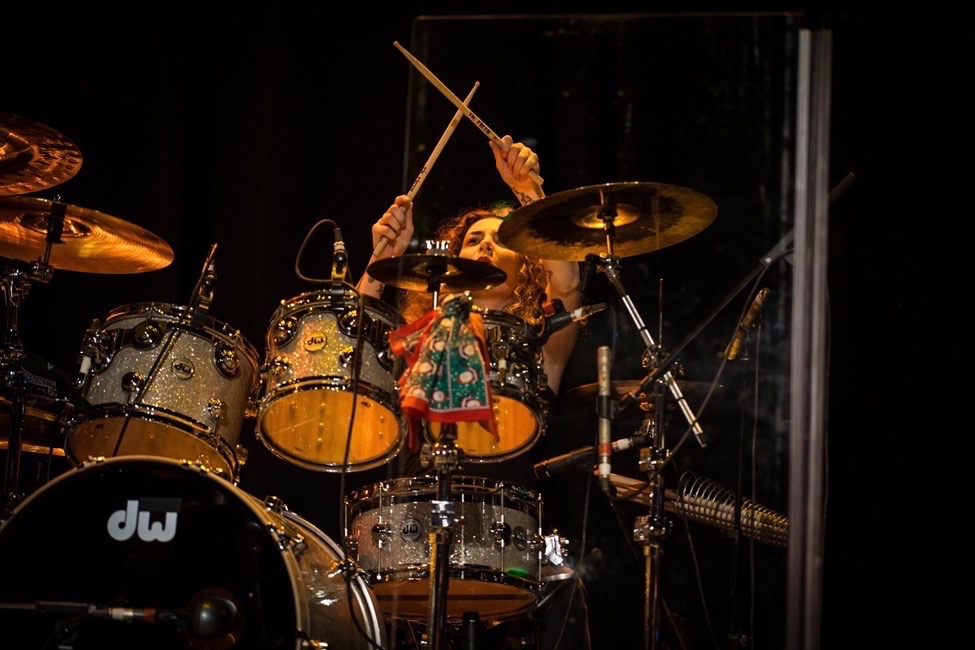 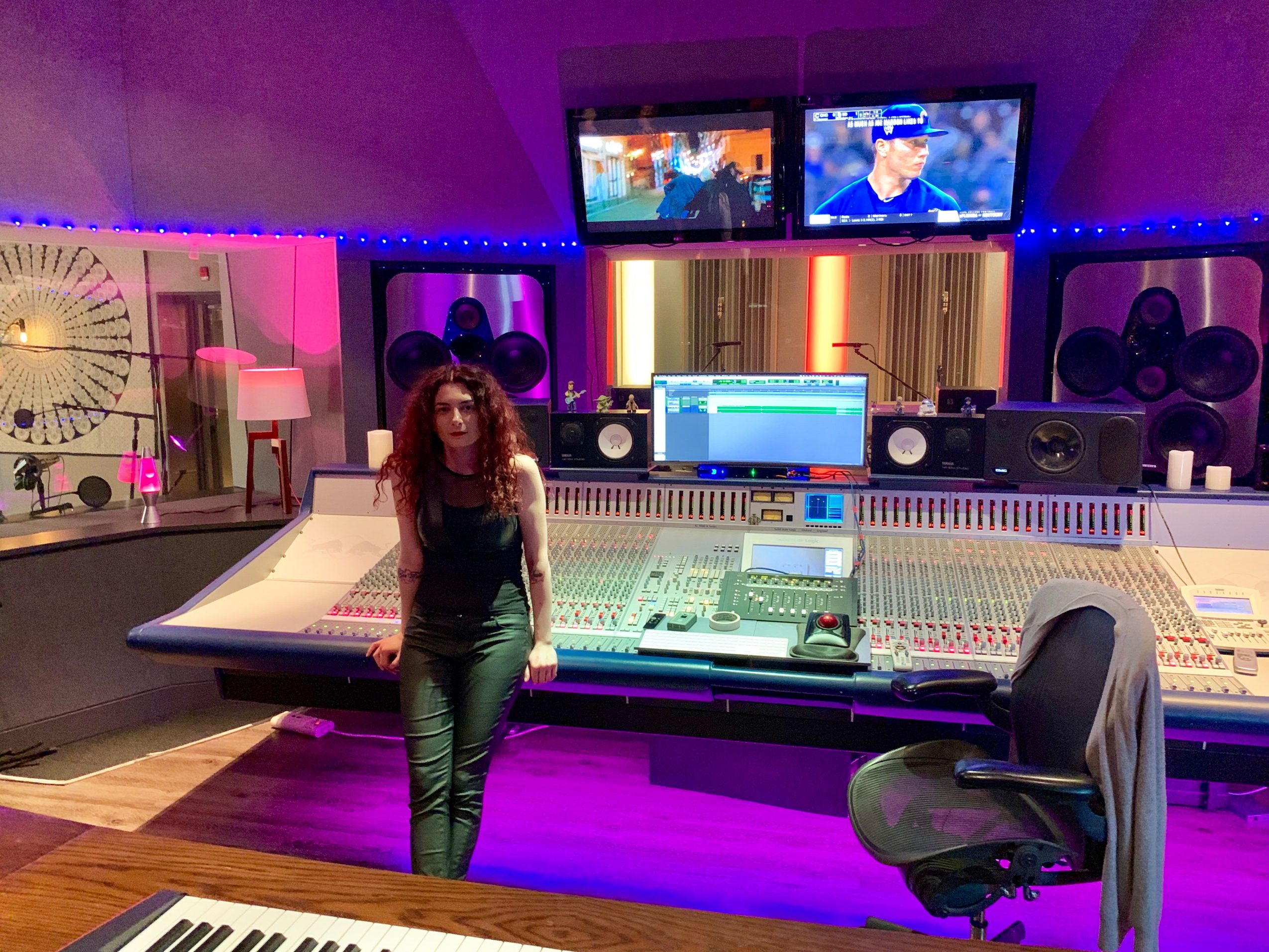 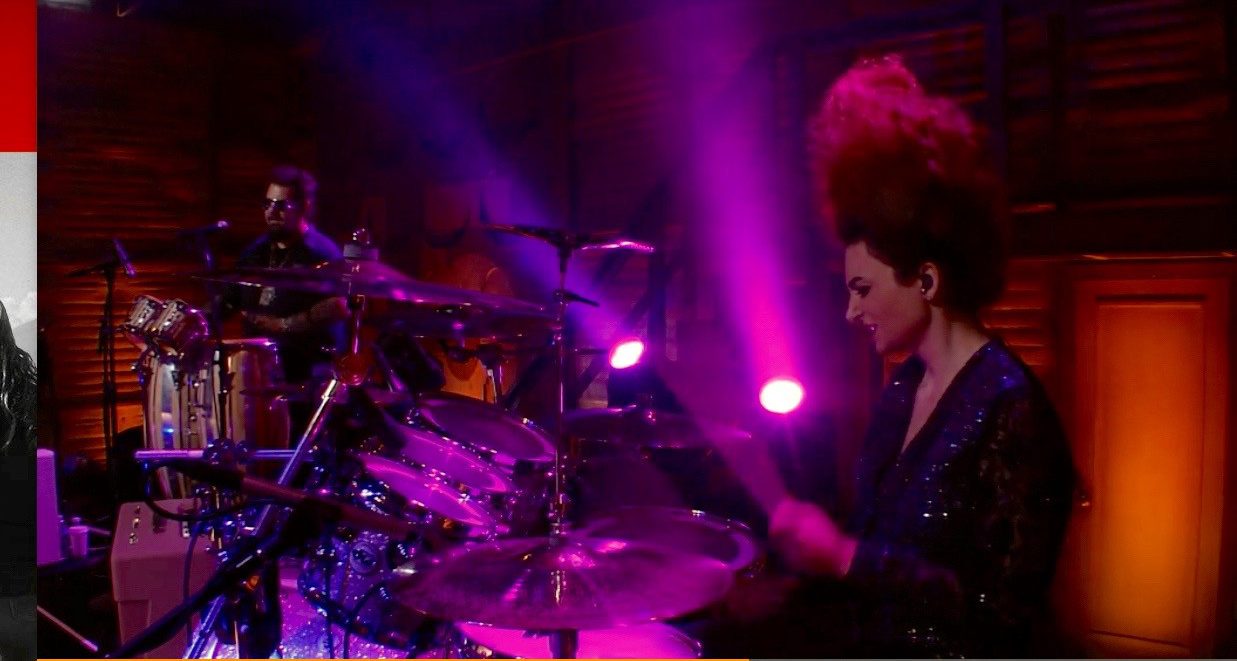 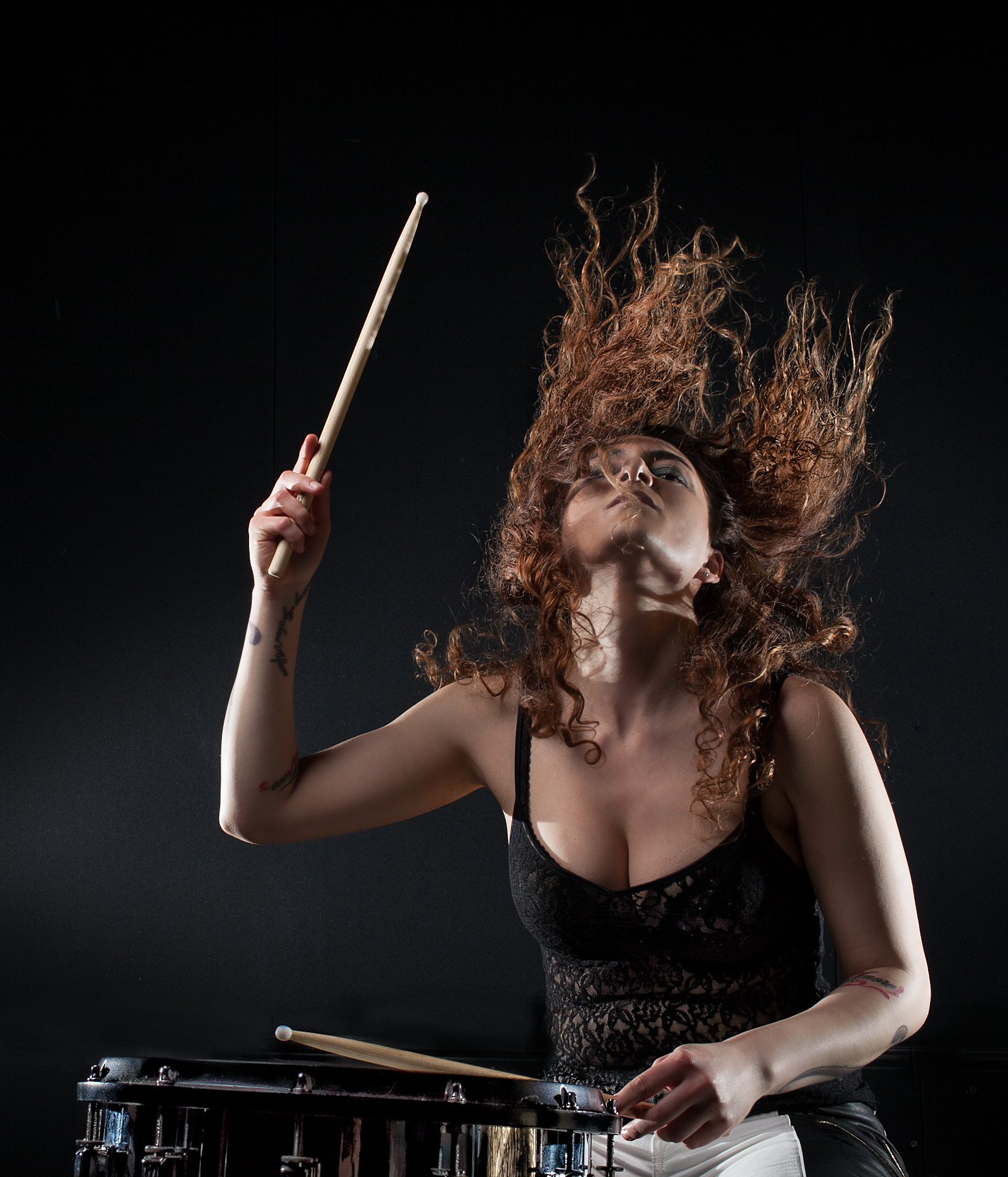 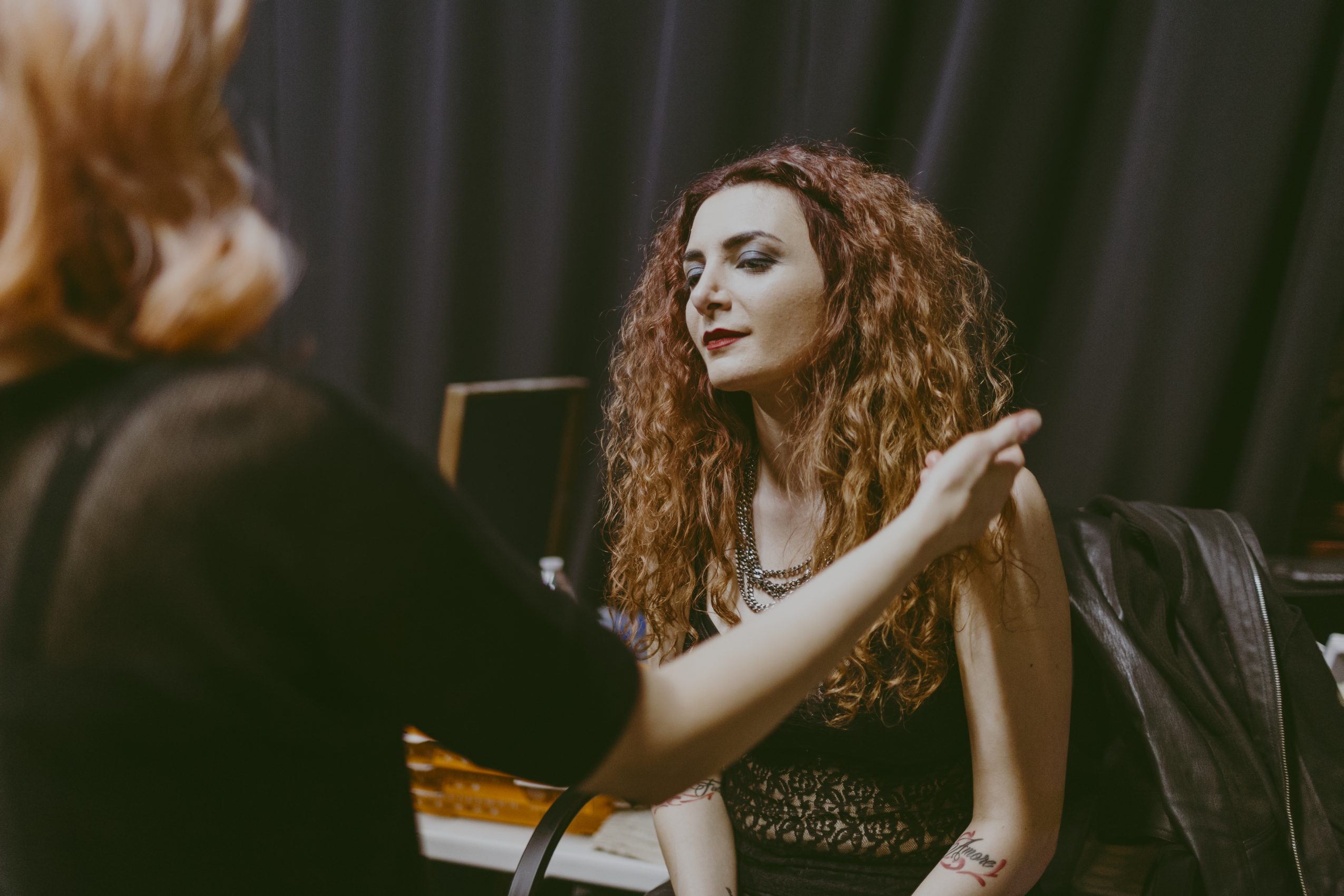 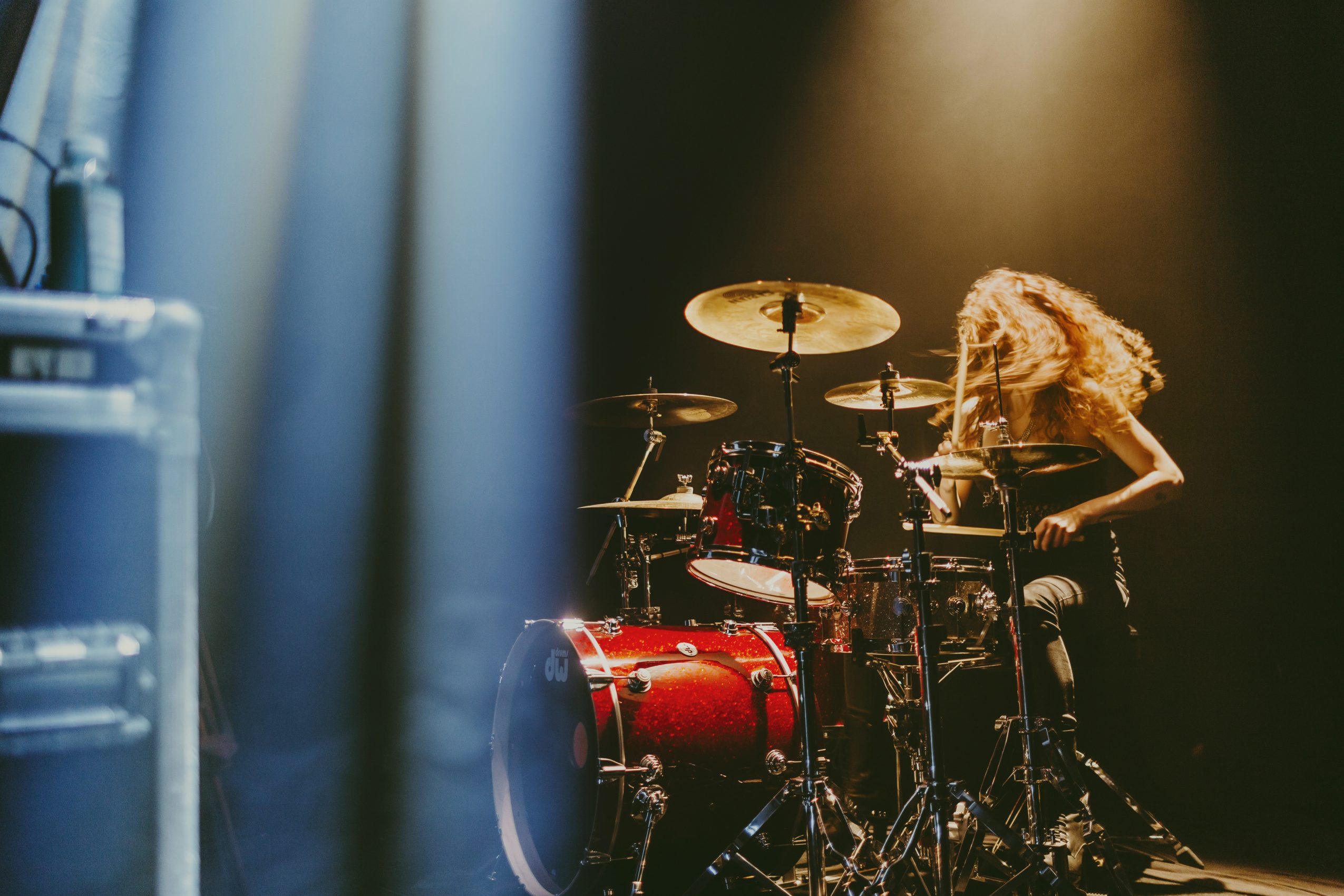