Meet Karl Hadrika of Netflix in Hollywood and Burbank 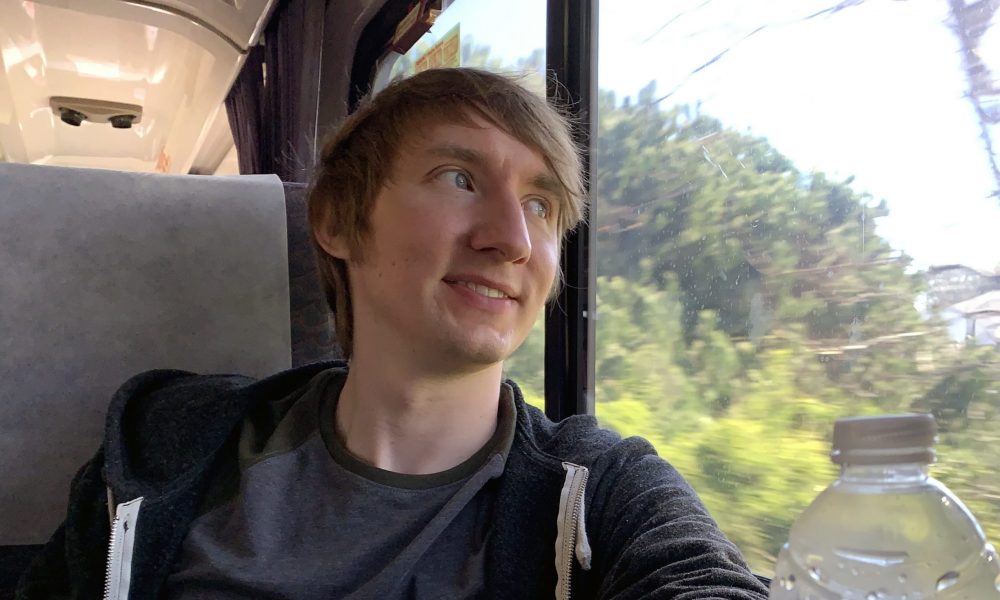 Today we’d like to introduce you to Karl Hadrika.

Karl, let’s start with your story. We’d love to hear how you got started and how the journey has been so far.
I’ve always known I wanted to pursue a career in animation. My mom was an animator at the Disney Studio in Florida, and I already loved cartoons, so there was never any second-guessing my career trajectory. Animation; that thing you do when you grow up. Since schoolwork always involved lots of blank paper, I was constantly drawing comics and characters. Two canvases per page if you use both sides. Notebooks were cheap, so honing my drawing skills became a convenient hobby. Every pencil worn to a nub; every eraser blackened with graphite. What else was I going to do all day in Precalculus?

For my first art job, I drew portraits at SeaWorld, the realistic kind without goofy expressions or smiling animals. After high school, I went to Art College and enrolled in an animation program. Two Studio internships and one thesis film later, I secured my first gig at Blur Studio in Culver City. In the span of one week, my dorm had been cleared out, I had driven my Saturn to the west coast, and had started working as a feature storyboard artist. A year in, I decided to change course from feature to TV animation, where all the action seemed to be happening. It’s basically been a show-to-show hustle ever since.

We’re always bombarded by how great it is to pursue your passion, etc – but we’ve spoken with enough people to know that it’s not always easy. Overall, would you say things have been easy for you?
The road to success is fraught with potholes and unexpected side streets, especially if we’re talking about the animation industry. You can’t anticipate how plans unfold. I’ve been through the standard checklist of hard knocks for artists in LA: being broke between jobs, crazy work schedules, living on Trader Joe’s Fiber Cereal, and working full days and nights on my passion project. That last particular struggle, however, was of my own volition. You don’t have to forfeit stable living habits if you can work smarter. Efficiency is a stronger virtue than talent alone, and striving for it has yielded better results with less hardship. This industry is difficult enough. The last thing you want is to martyr yourself with a misplaced romanticization of “passion for the craft.”

Netflix – what should we know? What do you guys do best? What sets you apart from the competition?
Netflix is great! It’s stylistically diverse and very inclusive. I work in the story department (storyboarding, writing, and pitching shows) If you had to put a label on my aesthetic, I’d call it “darkly comic dynamism.” When writing or storyboarding, I have the most fun exploiting characters with deeply fatal flaws. This can range from indignation, fear, trauma-induced fury, pettiness, obsession, and malice. That stuff is so visceral and hilarious to draw. Characters tend to be super engaging when their moral integrity is somewhat compromised. I pitched a whole show about an angry teenage cynic refusing to let anyone sit on her bench. “Becky Prim,” a pilot on YouTube, is one of my favorite projects in recent years.

Animation is a highly collaborative medium. Whatever flavor you add, however distinct, is only one of a vast palette, complimenting and enhancing the talents and sensibilities of your crew. This is especially rewarding when paired with equally unique voices, resulting in a hybrid, multi-faceted effort unachievable as a mere solo act. I’m especially proud of my involvement in the upcoming independent pilot, “Long Gone Gulch” which I co-wrote and storyboarded with creators, Zach Bellissimo and Tara Billinger. It’s a pure labor of love and exemplifies the potential for story-driven animation as high art.

Has luck played a meaningful role in your life and business?
You tell yourself everything is achieved through sheer force of will but the truth is timing is everything. A strong work ethic is a constant through-line but every break I’ve had can be attributed to circumstance and knowing the right people. Coming from an animation household gave me an edge, instilling an early appreciation for critique and immersive practice. I was lucky to have met Hailey Herrick, who vouched for me at Blur Studio, leading to my first story test and studio job outside school. Later in 2014, I never would’ve worked on “Bunnicula,” my first TV credit, if Kaitlyn Ritter hadn’t recommended me to showrunner, Jessica Borutski. Adam Paloian, who I knew through my stint on “SpongeBob SquarePants,” put my name in the hat for “The Cuphead Show,” my current gig at Netflix. Countless examples of folks willing to advocate for me have enabled my career path. All the while, the consistent support from my friends and family have promoted a confidence that has carried me through whatever low points I’ve endured. “Luck” put these people in my life. On the flip side, whenever an outright unlucky setback rears itself, the ensuing dark emotions usually become fuel and fodder for most of my best work. 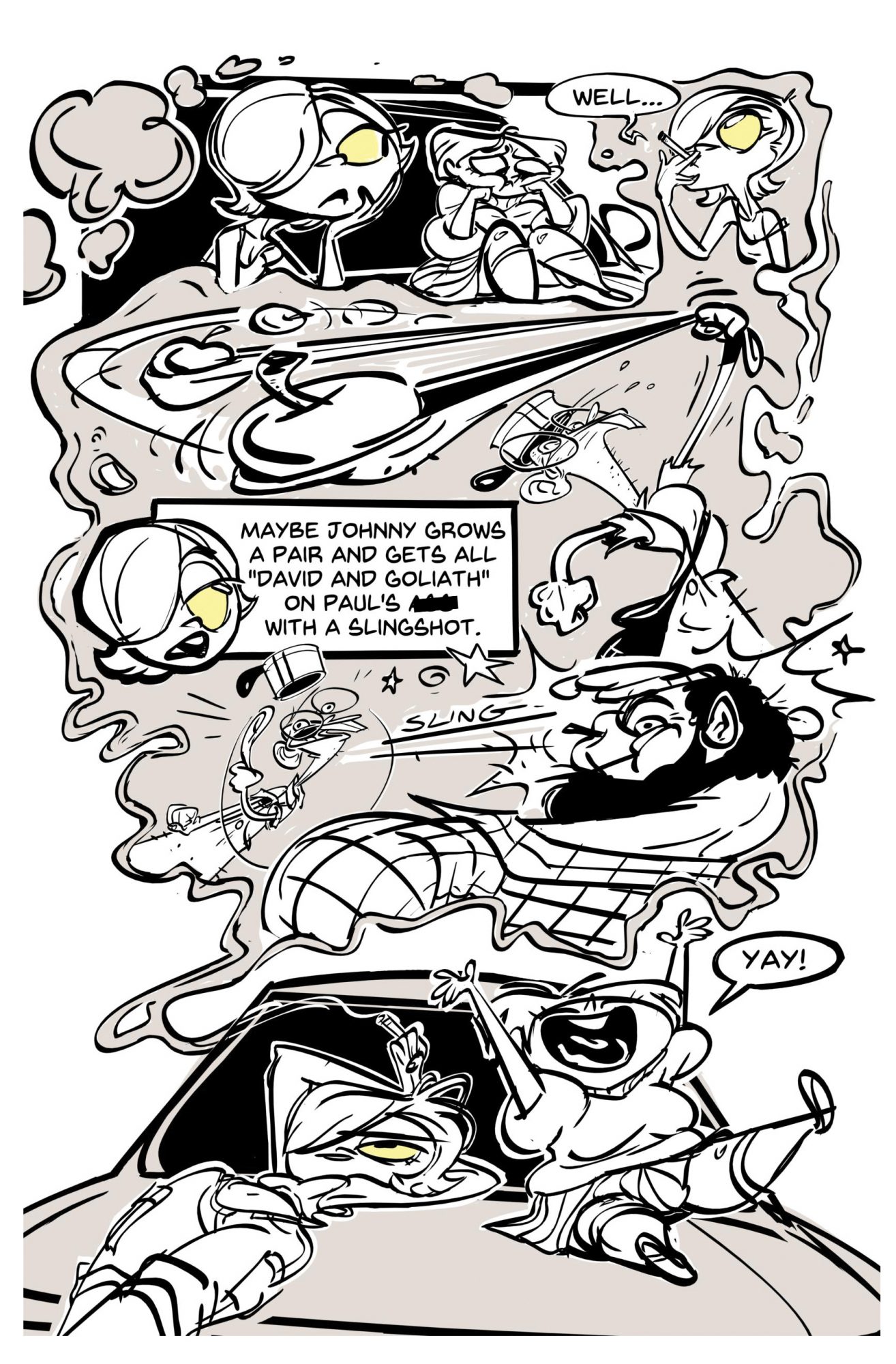 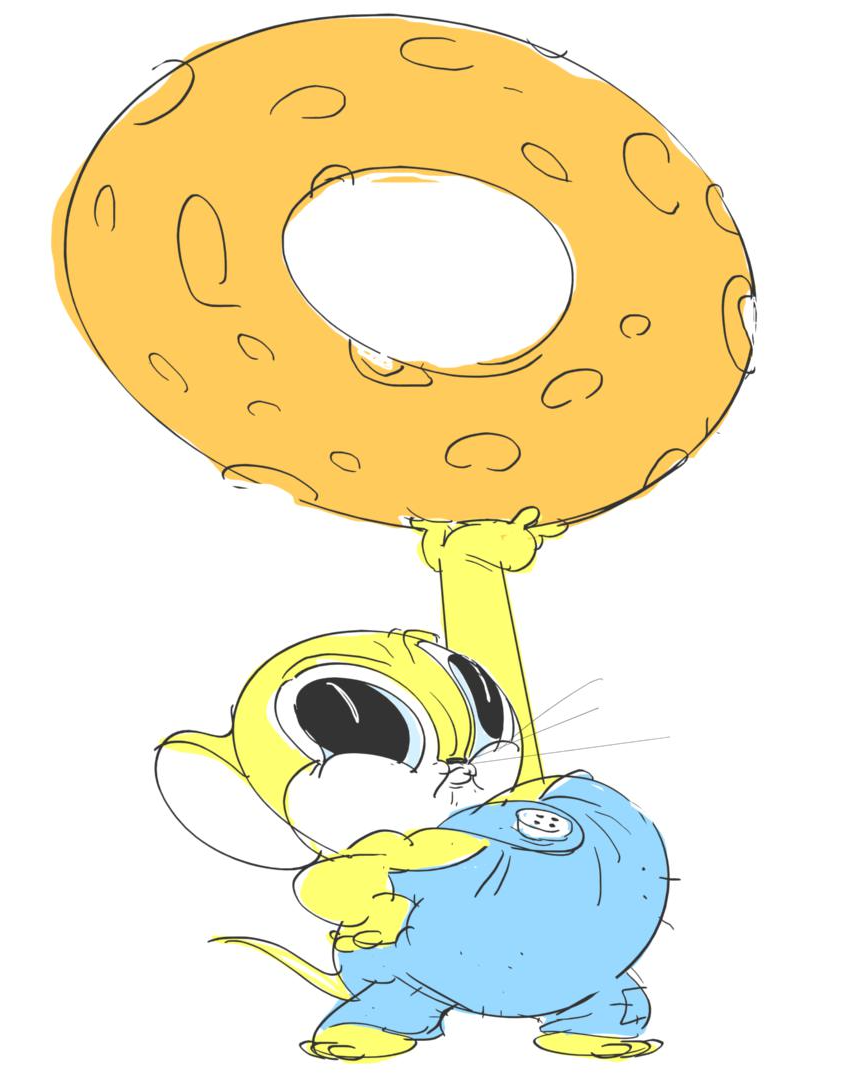 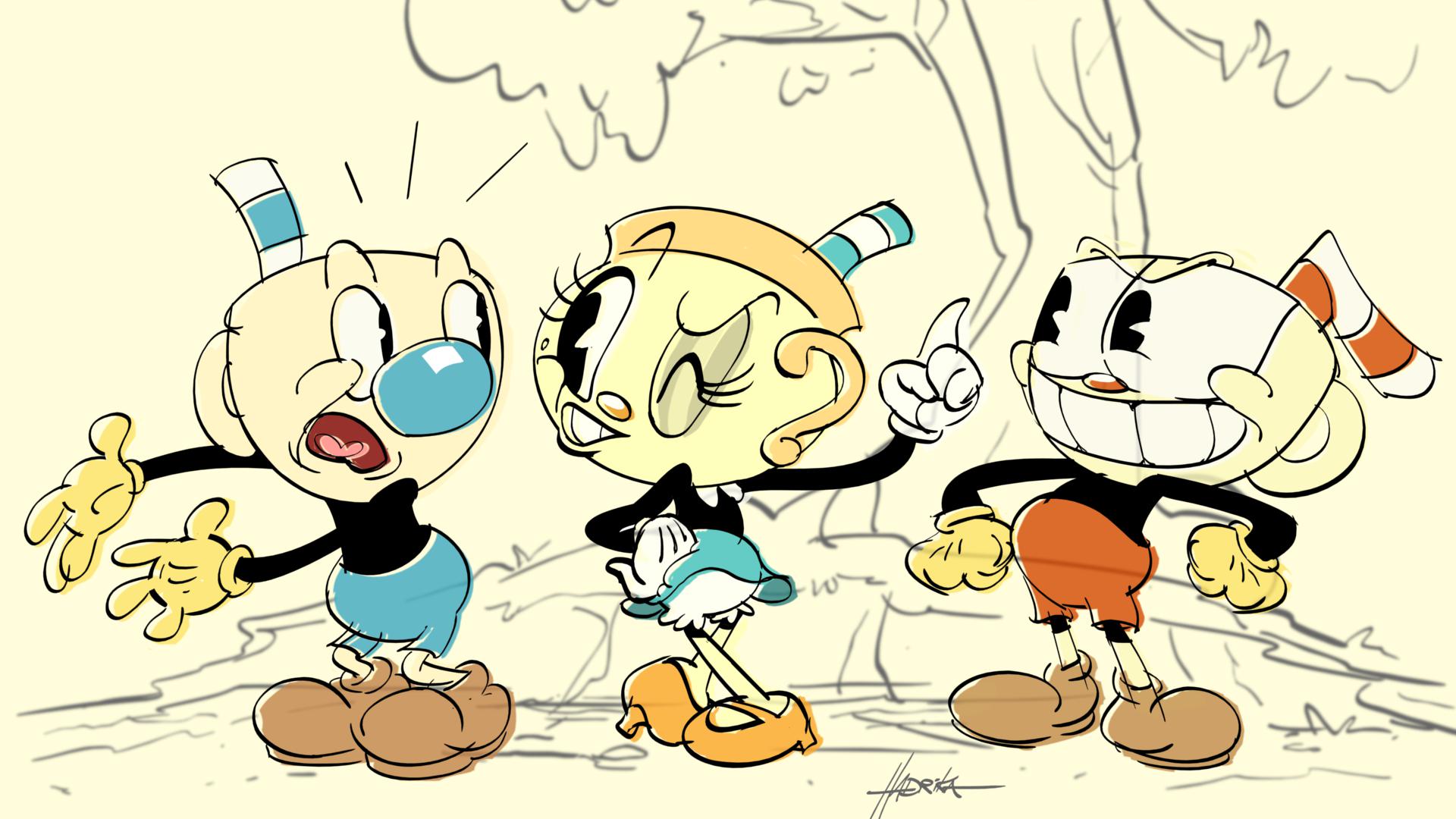 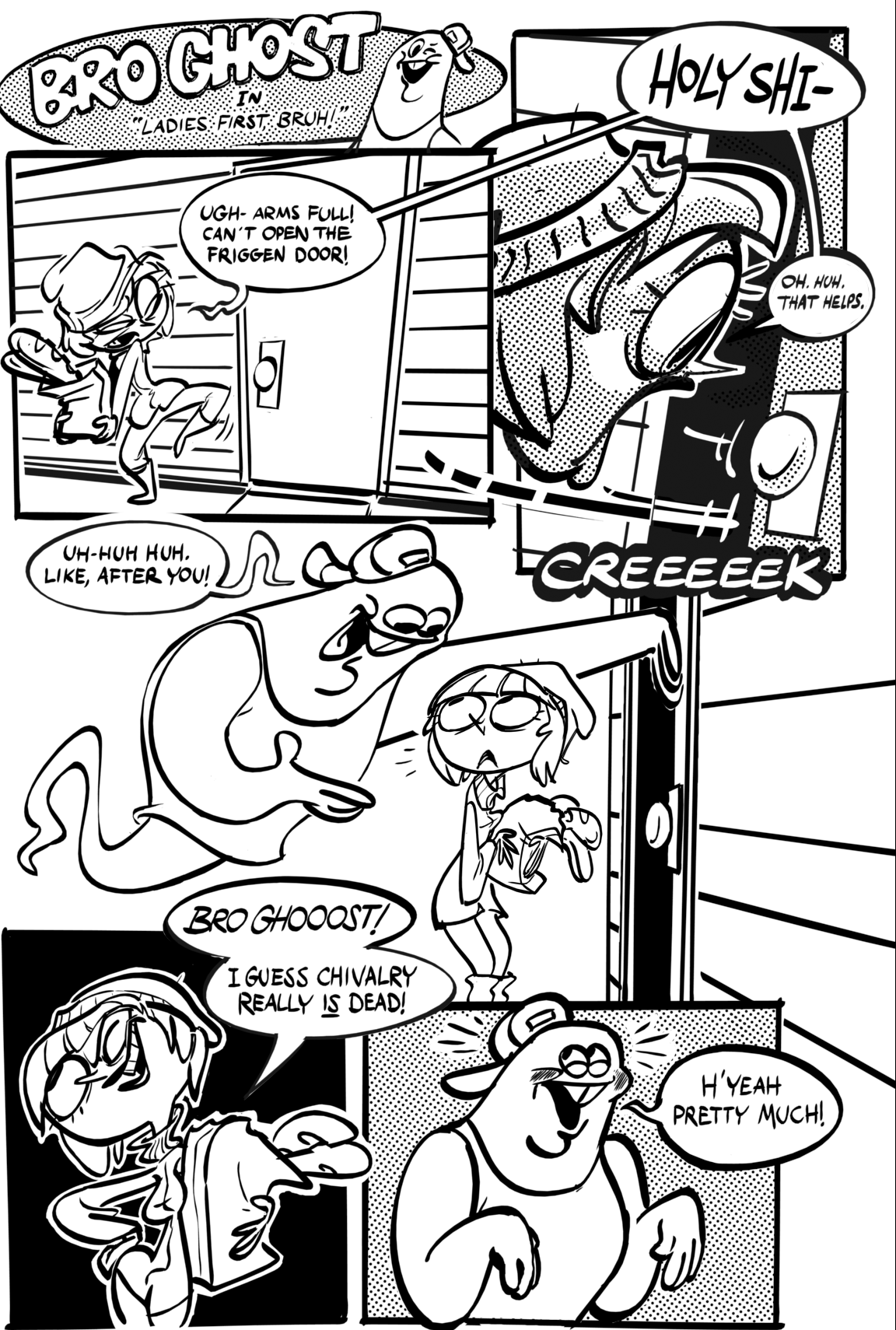