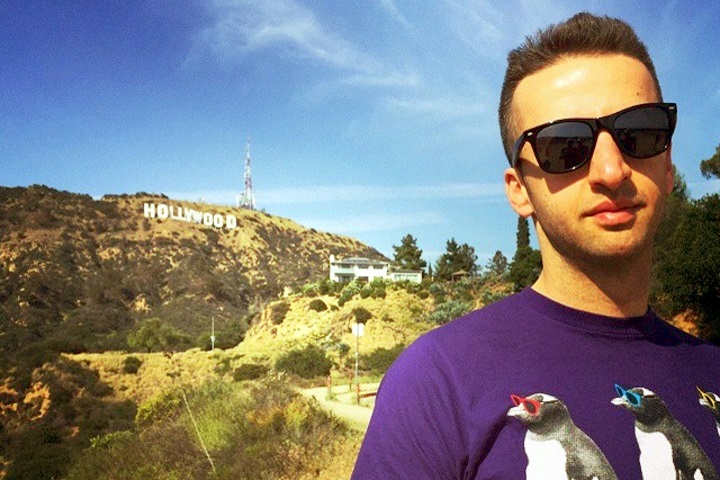 Today we’d like to introduce you to Alessandro Masi.

So, before we jump into specific questions about the business, why don’t you give us some details about you and your story.
First a bit about my childhood: I think my father is the one to “blame” for my great passion for movies above anything or anyone else. He is a great “connoisseur” and lover of cinema and ever since my sister and I were children, we got used to either go to the cinema, especially on weekends, or watch the movies of the week at home. I have clear in my mind those moments with my family. I have clear in my mind the moments we were together watching masterpieces like ‘Driving Miss Daisy’ or spaghetti westerns like ‘The Good, the Bad and the Ugly’. Nevertheless, I am a dreamer and a realist at the same time: growing up I realized and learned how much there is behind that extraordinary piece of art, and therefore I chose a business education applied to the entertainment industry in its entirety. Not by chance, my favorite movie is ‘Cinema Paradiso’: it was one of the first movies I saw in a theater and I also feel close to its protagonist, Totò, who falls in love with the movies in his childhood and decides to dedicate his life to cinema.

My peers would define me a supporter of innovation for the entertainment industry and passionate business developer. I started my career in digital strategy and moved on through film and television financing, production, marketing, acquisitions, international sales and distribution between Milan, Rome, London, New York City, and Los Angeles, where I moved in January 2015 to be in the worldwide capital of entertainment.

I have been playing a critical role – attending all the major markets and festivals such as AFM, TIFF, Cannes/Marché, Berlin/EFM, Sundance, AFI Fest, MIPCOM, NATPE, besides events like CinemaCon, CineEurope, NABShow, ComicCon, Licensing Expo – distributing global television successes like ‘Wife Swap’, The Fugitive Chronicles’, ‘American Gods’, ‘The Young Pope’, award-winning and breakthrough box-office hits such as ‘Enter the Void’, ‘Italy: Love It, or Leave It’, ‘Goodbye Solo’, Wendy and Lucy’, ‘Beyond the Mask’, ‘Girl Rising’, ‘Margin Call’, ‘Jeepers Creepers’, ‘Barney Thomson’, ‘Mustang’, ‘Kids in Love’, ‘Rise of the Footsoldier’, and Oscars contenders like ‘The Salesman’, ‘Hell or High Water’, ‘Captain Fantastic’, ‘Manchester by the Sea’.

I am currently taking to market five original animation properties developed by Spark Gap Entertainment and handling international sales of the documentary produced by American Zoetrope about the Italian origins of the Coppola family, ‘The Family Whistle’, which debuted at Cannes last year.

I am also a regular panelist as expert in digital business models and film distribution and a member of the jury assigning the awards at the first and most prominent festival in the world for digital content, the LA Web Fest, as well as at the Rio Web West, Berlin Web Fest, Roma Web Fest, Roma Tre Film Festival, Francofilm.

As a producer overseeing distribution, I was awarded the Italian Golden Globe for best documentary feature in 2013 for ‘Suicide Italy’ and have recently produced with an award-winning crew a high-concept sci-fi short named ‘Phenomenon’ as transmedia proof-of-concept for feature and series.

Born in Potenza, Italy, I earned a BS in Business Economics from University of Siena with a thesis on movie marketing featuring – thanks to a close collaboration with Sony Pictures – a case study on the marketing strategy for the Spider-Man franchise, an MS in Media Management from Bocconi University with a thesis on business models for web TV which foresees the exponential growth of digital video and SVOD in particular, an MBA from Hult International Business School, and a Certificate in Business of Entertainment from UCLA.

We’re always bombarded by how great it is to pursue your passion, etc. – but we’ve spoken with enough people to know that it’s not always easy. Overall, would you say things have been easy for you?
Jumping from place to place, continent to continent, struggling to keeping in touch with your own roots: that’s not an easy task and requires a lot of belief and having clear objectives. However it is needed to build a truly international profile and career. Also, the entertainment industry is highly competitive and it is very hard to break into and make progress but true passion and hard work always gets rewarded eventually. I am grateful to family and friend, as well to a few key people who have been long time mentors.

So, as you know, we’re impressed with FlexyMovies – tell our readers more, for example what you’re most proud of as a company and what sets you apart from others.
FlexyMovies™ has been conceived in 2013 with the idea that the film industry needs flexibility. FlexyMovies™ is first of all innovation for the entertainment industry: we pioneered digital distribution and introduced the concept of variable pricing applied to movie tickets as a way to increase moviegoing attendance and revenue. We engage audiences with a number of Smart Moviegoing™ experiences making effective use of social media and new forms of distribution such as theatrical on demand, where each screening kicks in once a threshold amount of seats is filled.

Strong of such ability to innovate and market to consumers effectively, FlexyMovies™ has expanded into providing market access to producers, advising on financing and acquisitions, developing and implementing worldwide sales and distribution strategies for quality filmed content. We are a stable presence at major film markets and festivals such as Marché du Film at the Cannes Film Festival, European Film Market at the Berlin Film Festival, American Film Market, Toronto International Film Festival, Sundance, AFI Fest, LA Film Festival, SXSW, Tribeca, Rome Film Fest, Venice Film Festival, LA Web Fest, as well as at the most important professional events such as CinemaCon, CineEurope, Licensing Expo, NABShow and many others.

What sets FlexyMovies™ apart is the ability to foster innovation in established standard processes of the film industry and come up with cutting-edge solutions while being fast and dynamic.

So, what’s next? Any big plans?
I want to keep distributing high quality filmed content and ensure that art makes sense financially. I want to provide people around the world with great entertainment and empower the work of exceptional creatives who are able to make that people have fun, dream, fall in love, and think about society, sometimes, as it happens in ‘Captain Fantastic’, for instance. People will want to see movies like ‘Captain Fantastic’ or ‘Manchester by the Sea’ even in 100 years from now. There’s always going to be demand for independent movies, somewhere and somehow. Festivals will continue to play a key role in the game. But the industry has the duty to be less risk-averse, experiment, perhaps fail badly, but get those stories on some kind of – large, small, 5.5-inch, or VR headsets – screen and then find smart ways to reach those audiences. Everything is changing so quickly and flexibility is key. It’s a very exciting time to be in entertainment.

I have been here in LA for about two years now and I love the energy of this place so I build my base here while traveling around the world for film festivals and markets. However more and more money for Hollywood, both for majors and independents, is coming from developing markets such as China which are eager to be a relevant part of the game, and therefore I am planning to expand my business reach to that area of the world.