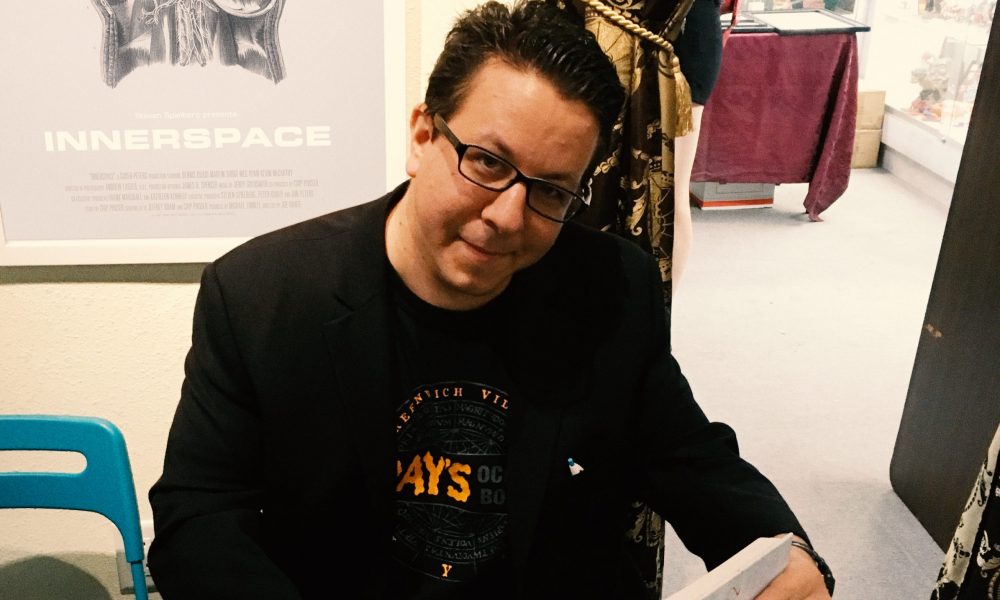 Today we’d like to introduce you to Scott Saslow.

Scott, please share your story with us. How did you get to where you are today?
I went to film school years ago, though graphic design had always been on the periphery. In fact, the first college open house I went to was for design which I suppose proves that one’s first instinct tends to be the correct one. Anyway, the dream of filmmaking fell by the wayside and I ended up spending the latter half of my 20s working a succession of temp jobs. (I was also a test subject for NASA but that’s another story!) One day, I woke up and realized, “I can’t be a temp forever!” So I moved back in with my parents and enrolled at Florida Atlantic University. I managed to get good marks in my portfolio — ironically, the part the instructors liked the best was the written essay! And, we were off to the races. I did pretty well in school. I edited a montage of colorful scenes in movies that won 1st place at a student exhibition. One teacher even took me aside early on and asked, “Have you done this before?”

I graduated magna cum laude in the spring of 2015 and immediately got two jobs: one freelance and one full-time. The freelance gig happened simply because I replied to a job posting I wasn’t qualified for, but it was written in such a funny way I knew I had to get in somehow and meet these people. The full-time job… I learned a lot but ended up leaving six months later and going back to the retail job I had during school. One morning, I read about an Australian designer named Pete Majarich who was doing one movie poster a day, all very minimalist. The proverbial lightbulb went off and I thought, “Hey, I can do that!” So I did. I did one movie poster a day for 365 days. Nothing ever went viral, so to speak, though Kevin Smith re-tweeted the poster I did for Dogma and that opened one or two doors. I ended up doing some posters for some film students and work begets work. So, one poster led to another and so on.

I lived in LA for a year and a half after I graduated film school and I always knew I wanted to come back. So, I finally made the move out here at the end of 2016. I definitely made the right decision. I managed to get a three-month internship at BLT, one of the big entertainment ad agencies out here. And after creating some mock Blu-Ray releases at school, I was finally able to do it for real when a producer at Arrow Films hired me to create some box sets for their Arrow Academy label… all because he liked some of my daily posters.

Great, so let’s dig a little deeper into the story – has it been an easy path overall and if not, what were the challenges you’ve had to overcome?
It hasn’t been a smooth road at all. I had wanted to be a filmmaker since I was 11 years old so to wake up one day a decade later and realize I was wrong… it’s not an easy thing to get over. (Google “quarter-life crisis” – it sounds silly but I can assure you it’s real.) But thankfully, I always had the support of my family and a small group of friends and it turns out graphic design was in my back pocket all along. And when I aced all of my design pre-requisites and the aforementioned teacher thought I had done this all before… it made me realize I was on the right track. And the full-time job I got out of school… it made me realize what I value in a workplace environment. And it was in that post-quitting ignominy when I started the daily poster project.

Moving to LA again… some people never make it out of their hometown, while others can never come back. I managed to move away, come back home and move away again! Unlike the first time I lived out here, I knew what to expect. I take absolutely none of this for granted.

When it comes to designing posters, the biggest challenge is often finding good materials to work with. With some of these micro-budget films, all I have to work with are screenshots. I enjoy the challenge, not to mention my style involves doing more with less… but for any filmmakers reading this who might be just starting out, be sure to take high-quality still photos during production. They’ll come in handy later!

Alright – so let’s talk business. What should we know?
While I offer a variety of print design services, the goal was always to combine my two interests: graphic design and film. As a result, I’ve managed to find a niche in key art and home video packaging. I’ve worked with clients worldwide, including micro-budget filmmakers in Hollywood and Toronto, a student filmmaker in New York, a commercial director in Uruguay, a writer in Italy and Arrow Academy in England. My style tends to be more minimalist and photographic but I am always flexible and willing to experiment. I’m also not against giving breaks to poor film students, having been one myself!

Some of my work appears in Poster Spy’s Alternative Movie Poster Collection, published by Plan9 Entertainment, and also appears in Printed in Blood’s art book celebrating the 35th anniversary of John Carpenter’s The Thing. My work has been exhibited at Creature Features in Burbank and is showcased in the fashion magazine The Impression (issue #3). Of course, I’m always looking for more licensing and networking opportunities, and there are a couple of neat projects in the pipeline!

Is there a characteristic or quality that you feel is essential to success?
Certainly an attention to detail and a willingness to experiment. To borrow a quote, “Take the work seriously, but don’t take yourself too seriously.” And always be kind.