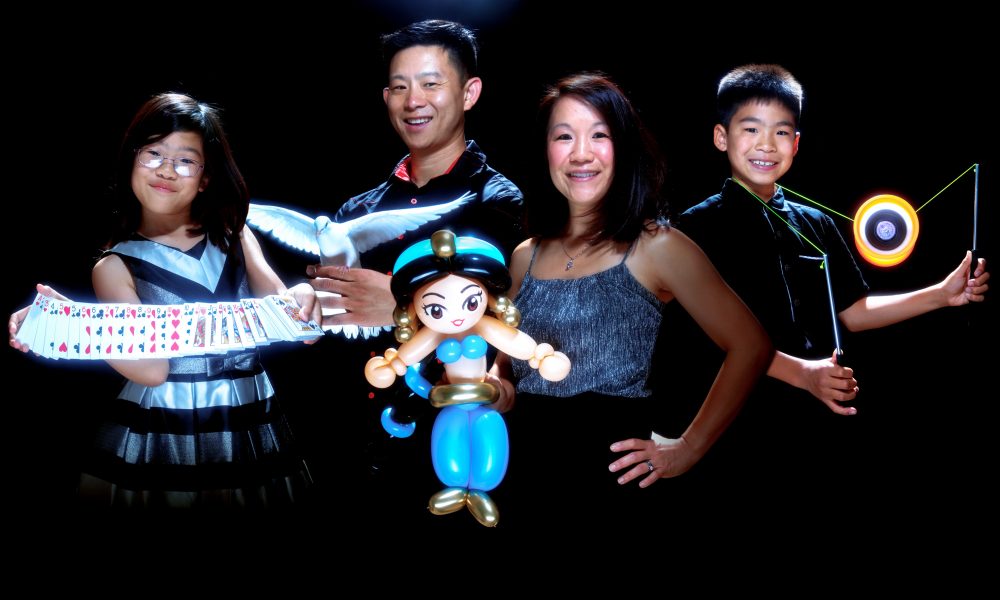 Today we’d like to introduce you to Daniel Chan.

Thanks for sharing your story with us, Daniel. So, let’s start at the beginning, and we can move on from there.
Throughout my life, I’ve always had an interest in magic. Growing up, I saw a few magicians at theme parks. I also remember watching David Copperfield on television. I would record these specials on VHS tapes and watch them over and over again, often in slow motion, to see if I could catch anything. During college, I was a ski instructor in Big Bear at Snow Summit. At one event, there was a magician and seven or eight gorgeous Playboy Bunnies. I ended up following the magician watching each of his sets again and again. My wife jokes with me, “Good thing you didn’t follow the bunnies. I don’t think you would have made a good Playboy Bunny!” With each viewing, I would learn more. That’s why magicians often show a trick only once. With each repeated viewing, the viewer may come closer to figuring out how the illusion works.

During my remaining years of college, I met my friends Robert and Micheal Chang, who taught me how to juggle. Robert also lent me some magic videos. I had fun teaching lifeguarding, teaching windsurfing, and sailing during the summer vacations while completing my 4-year business degree.

After college, I worked full time at PalPal pre-IPO. I gradually started performing magic on the side at family events, libraries, and later corporate events. Around that time, I discovered Misdirections (a local magic shop), and the owner Joe Pon. He introduced me to many of the top names in the magic industry at his monthly lecture tours. I would work on the weekends performing magic instead of watching movies or hanging out at cafes with friends, and would occasionally use my sick days to take performances. It was tough essentially working seven days a week, with my daytime hours dedicated to my desk job, my evening hours devoted to magic practice and marketing my show, and my weekends dedicated to performance. I eventually quit my desk job to pursue children’s entertainment full time.

As time went by, I honed my close up skills while performing at children’s events, eventually getting hired to perform at nightclubs, corporate events, and tradeshows. It wasn’t until I decided to completely let go of the security of doing kids’ events that led to more corporate events.

I am also one of the few performers who can perform Bian Lian – also known as “face-changing” – a historically significant part of Chinese Sichuan opera. The secret of face change is legendary in China and has been passed down from one generation to the next within families. You will rarely see face-changing outside of China.

What were some of the struggles along the way?
Like all businesses, it has never been an entirely smooth road. Entertainment is a highly competitive market, and it takes more than just the skill or talent to work in this industry successfully. Some of the hurdles I had to overcome was creating a unique experience that would set me apart from others in my industry. As a children’s entertainer, I strove to provide a full package as a single performer, offered high-level magic, juggling, and acrobatics to become a “three-ring circus rolled into one man.” As my close up skills developed, it took some time to transition into the corporate market fully. I had first to let go of the stability of income that children’s entertainment provided, as I couldn’t be taken seriously as a corporate performer when I was still catering performances to children. Task switching takes a toll; you have to change gears when catering to a different demographic. Additionally, it took time to fully develop the corporate relationships as many of the entertainers in that market were well established; entering this market meant I had to persuade companies to try something new despite their hiring a “sure bet” year after year.

Like most entrepreneurs, 2020 has introduced a whole new set of challenges, including taking an industry that relies on up-close interaction with spectators and completely removing the interaction that makes these effects more memorable. I honestly believed that my career as a magician might have been over when the shelter in place came into effect, and all live performances came to a halt for an indefinite amount of time – even now, having live performances seem out of the question until well into 2021. My team and I have adapted to the change by transitioning much of the show to fit a virtual medium and creating a better performance than we had prior to the pandemic. While it’s a journey, I’m confident that my company will make it through this period. I’m excited and hopeful as magic continues to evolve in the virtual environment.

We’d love to hear more about your work and what you are currently focused on. What else should we know?
I am now an internationally renowned, award-winning magician in the San Francisco Bay Area. I offer the ultimate entertainment experience, featuring world-class sleight of hand, playful pick-pocketing, and thoughtful sleight of mind. I’ve gone way beyond the classics. I perform many innovative magic effects integrating technology, including smartphones, iPads, and social media, to create unique, one of a kind performances. I also create photo-worthy moments.

Today, our family now covers both markets with my 12-year-old son in charge of all the kids’ events while I continue performing corporate events full time. As the performance landscape continues to change due to the ongoing pandemic, our business has fully pivoted to online performances via Zoom.

More recently, I am one of the first in the magic industry to pivot to Zoom fully and was recently featured in The Hustle as well as twice in Business Insider. In a single month, I was able to take an industry that was best experienced in person and turn it into a compelling virtual experience that people can enjoy at home. Buzzfeed has dubbed me as “Silicon Valley’s Favorite Magician” and have performed for many of Silicon Valley’s Elite, including Biz Stone and Ev Williams of Twitter, Marissa Mayer, Tim Ferriss, and Larry Page, to name a few. I have trained many other performers, including my son James Chan.

So far, I’ve been featured in Buzzfeed, CNBC, and Business Insider twice, once for our pivot to Zoom and the second time as the Billionaires’ Magician. A reporter from Wired has recently interviewed me twice, so I’m super excited about being feature again in a major publication.

Once my son takes over the corporate business, I would love to find investors and create a private magic club similar to the Magic Castle in the Bay Area. Still, before that, there are a few things to accomplish to ensure it has enough media attention to take off. My son James started training at age 4; at age 5, he was juggling 3 balls; at age 8, he was juggling 5 balls; at age 8 three flaming torches, and by age 10, he was picking pockets. James’ credits include appearing on ABC7 News, national television with Tiffany Haddish, Access Daily with Penn and Teller, and performing for the White House’s Chief Data Scientist, DJ Patil. James recently won the International Brotherhood of Magician’s’ online magic contest beating out many magicians twice his age in the first-ever magic competition held on Zoom. He was also the youngest person ever to be featured on Silicon Valley Business Journal. Since then, we’ve made lots of progress. James has gotten better, both as a magician and speaker; he’s also matured – and we want to capture that in one cohesive story, another documentary.

We’re leaving the possibility open for the documentary leading to unscripted reality. Chef Flynn, Justin Willman’s Magic for Human on Netflix, Adam Trent’s the Road Trick, DMC – the magician, Lior Suchard on Quibi, and David Blaine have all inspired me. But I didn’t want to repeat or rehash what’s already out there. Unscripted reality is oneway of doing that – it’ll also garner media attention, which will get us more sold-out shows.

This week we’re heading off to Catalina. I have fond memories of Catalina. In college, I worked on Catalina as a lifeguard. During that time, I also killed rattlesnakes with a shovel, then ate them after skinning them and roasted them over a firepit. The lobster season just opened, and I’m also going spearfishing. We’re in LA so often; we’re considering moving permanently to LA. If we decide to do that, this will also allow James to join the Magic Castle’s Junior Program and maybe even do some acting. 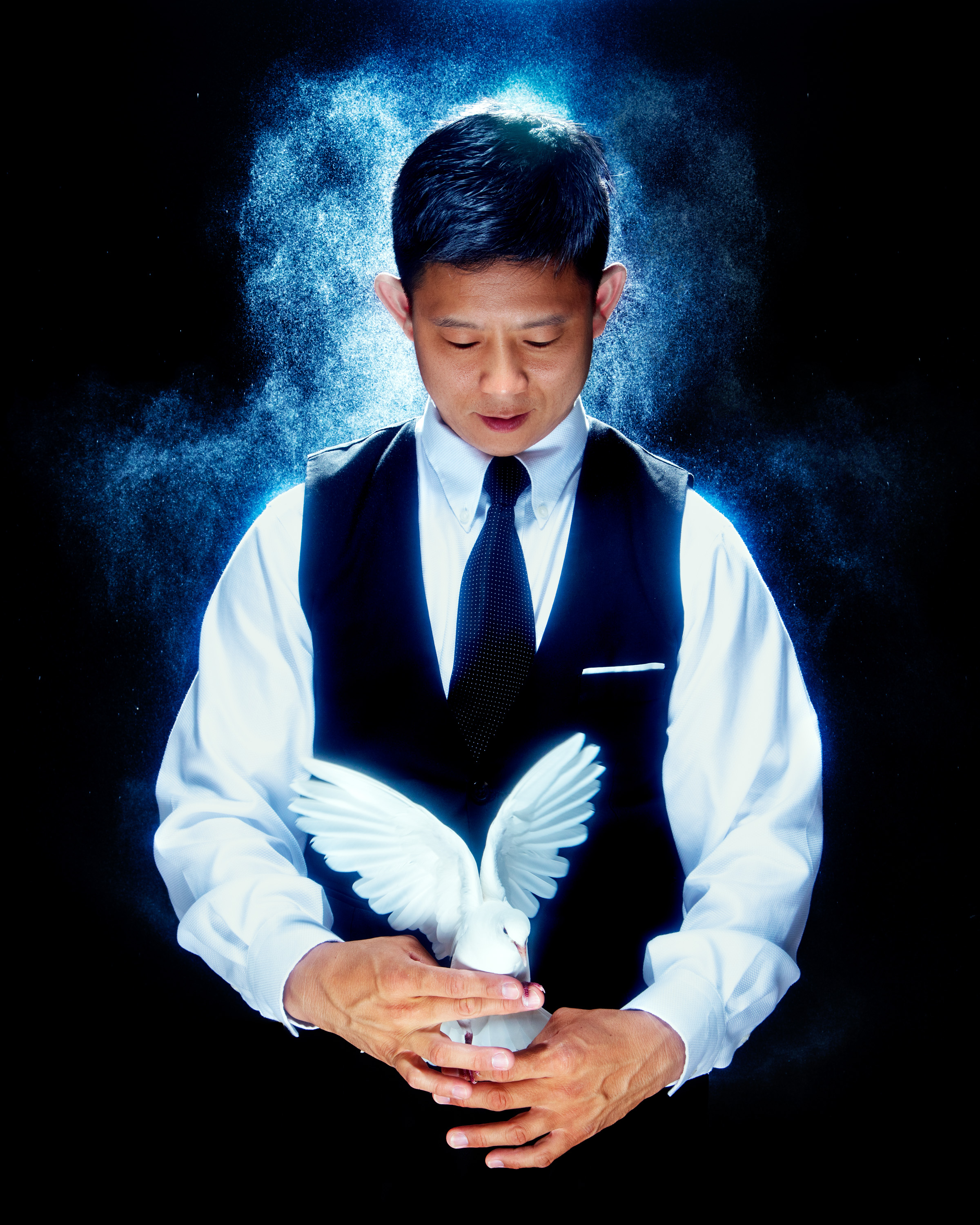 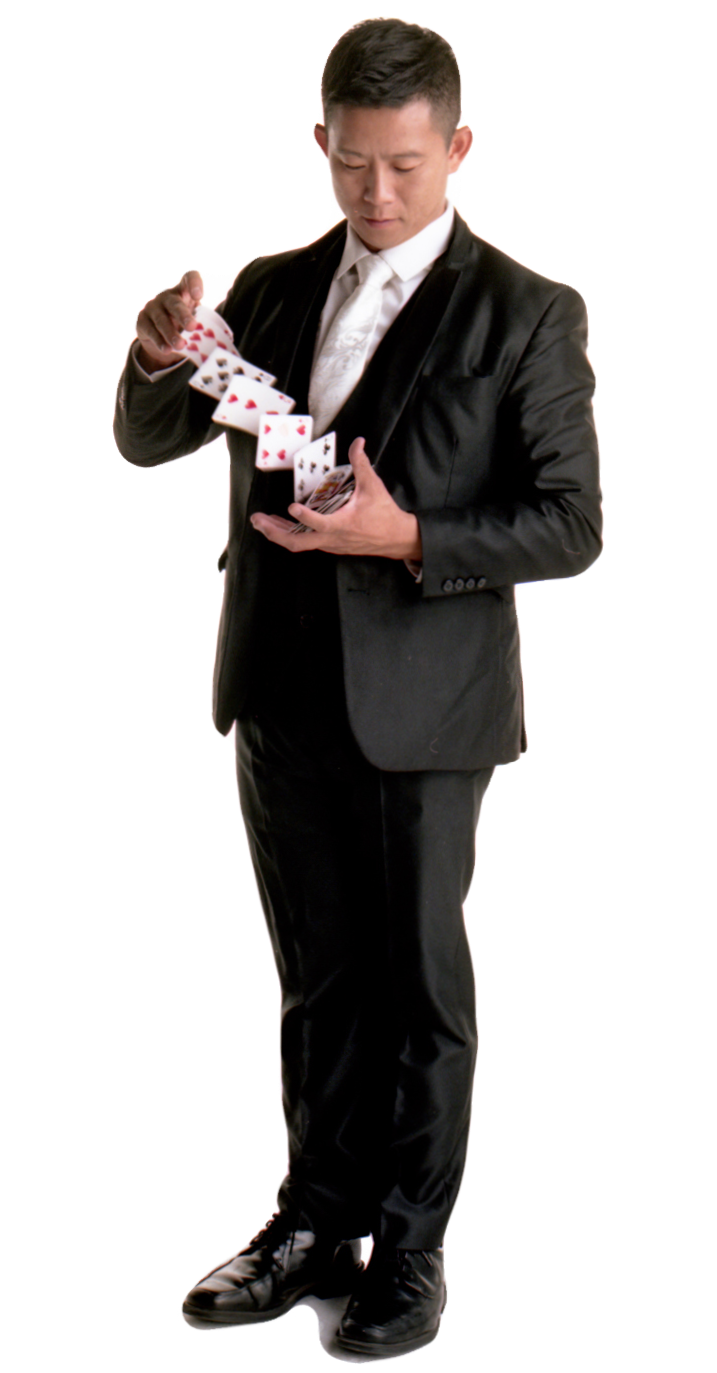 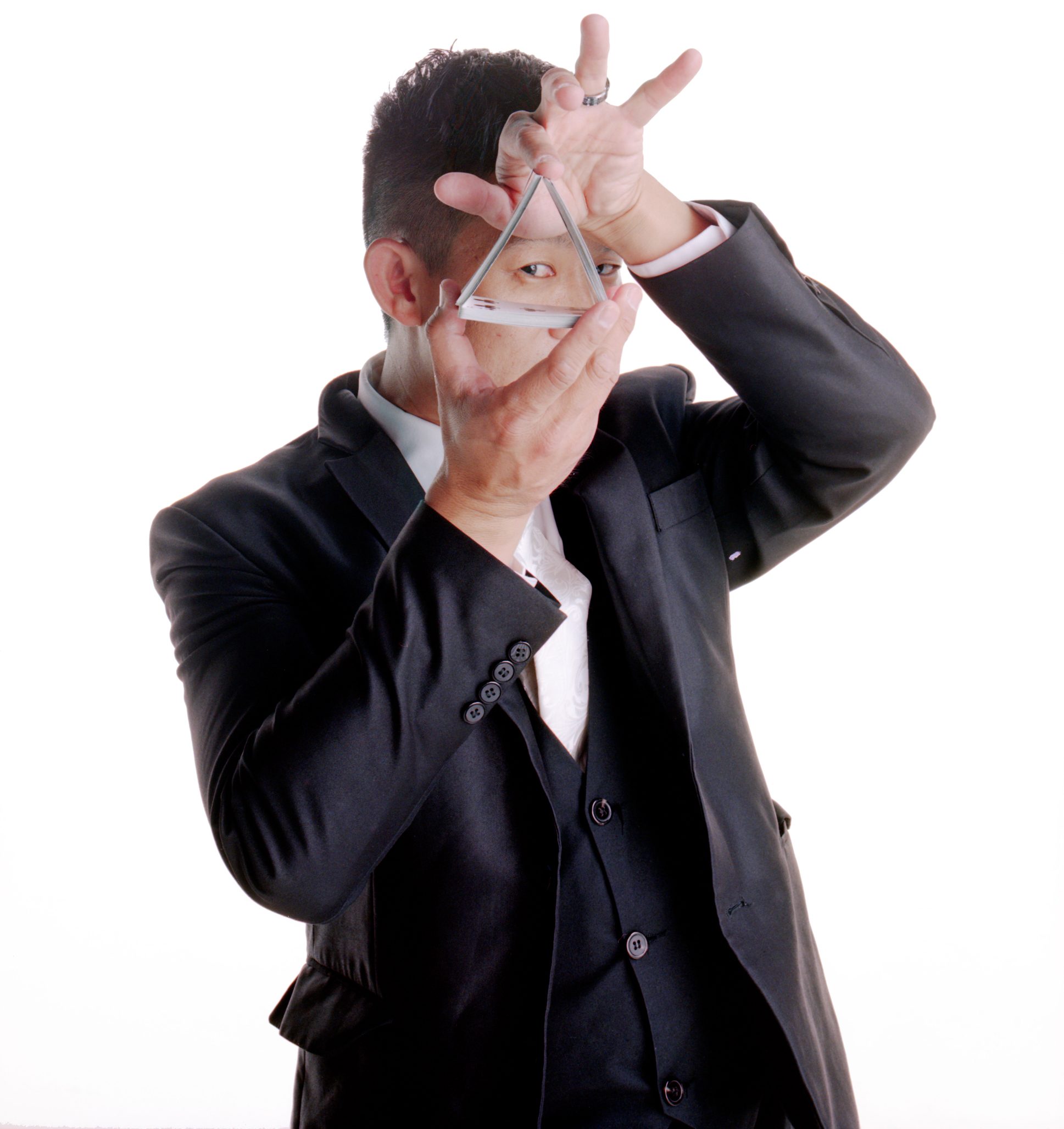 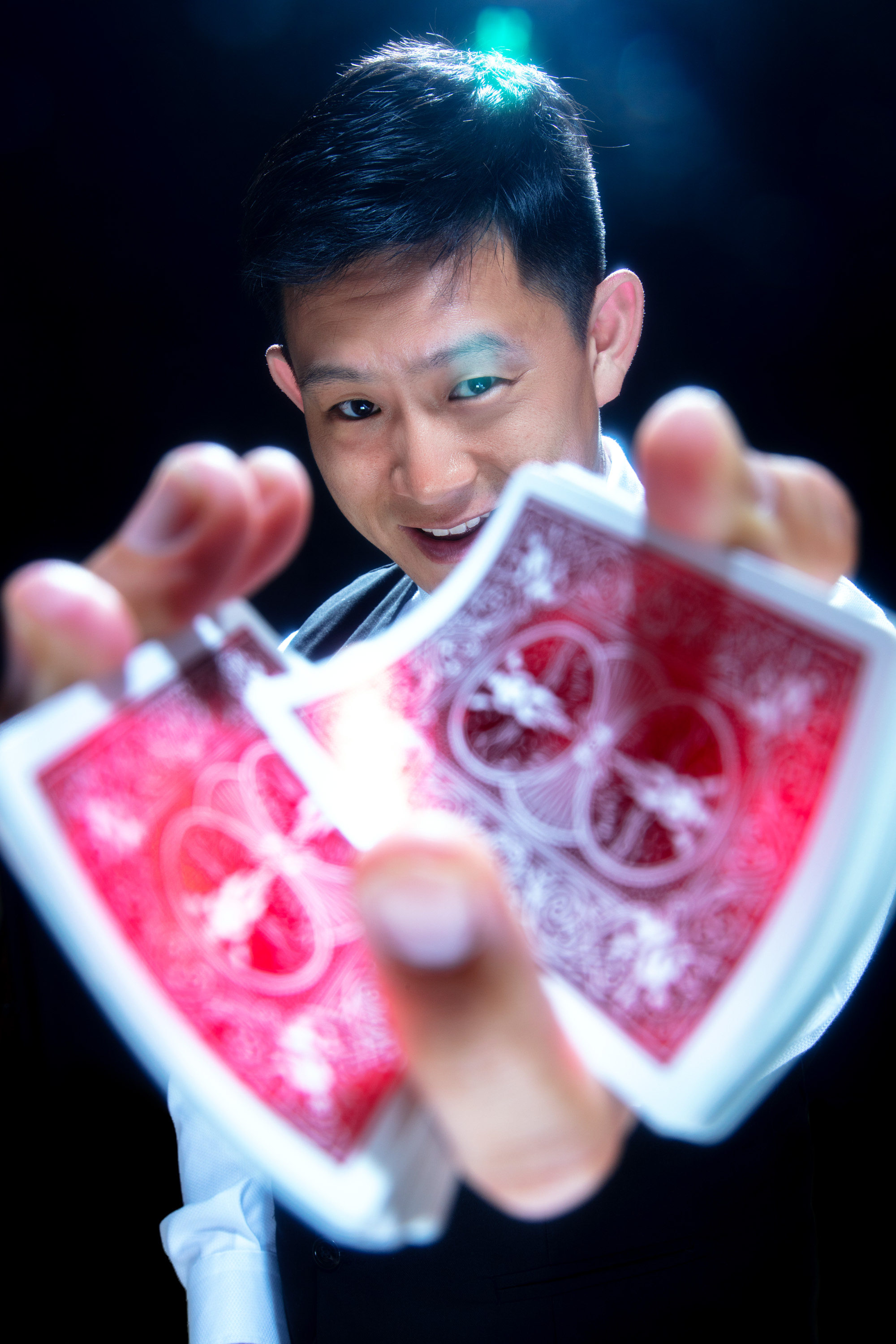