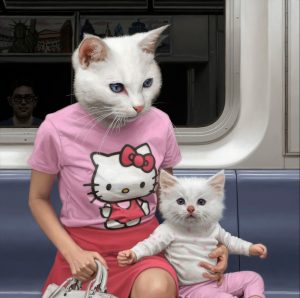 Today we’d like to introduce you to Matthew Grabelsky.

Hi Matthew, thanks for joining us today. We’d love for you to start by introducing yourself.
I knew I wanted to make paintings when I took an art history class in college. I had been making art since I was a little kid, mostly sculptural mixed media stuff but had never painted much. That class opened my eyes to classical European oil painting. I remember going to the museum and seeing these amazing realistic paintings, and I had this overwhelming desire to make something like that.

After college, I moved to Florence and spent four years studying drawing and painting at a small private studio where the curriculum was modeled after how students were taught in the 19th-century European art academies. It was eight to ten hours a day of drawing and painting sculptures, nude models, portraits, and still lifes. The experience was amazing and it gave me the basic painting chops I needed to come up with my own style. After I finished my studies there, I continued refining my technique through experimentation and studying old paintings in museums. At the same time, I began to develop my own imagery that captured my unique blend of interests and inspirations, eventually hitting on my current body of work which features humorous images of people with animal heads.

Can you talk to us a bit about the challenges and lessons you’ve learned along the way. Looking back would you say it’s been easy or smooth in retrospect?
I always believed that I was going to make it. That isn’t to say I was cocky, rather I felt that if I just kept on pushing ahead with my work, I would eventually figure out how to make paintings that expressed what I wanted to say and hopefully also appealed to others so I could make a living at it. An art career is such a strange unpredictable path and I think you need a fair amount of blind faith to make it through all the ups and downs and bumps along the way without simply getting discouraged and quitting.

One of my most difficult times came right before one of my biggest breaks. I had been painting for about ten years and had just enough sporadic sales to keep me going but I was starting to feel that maybe I was just a crazy, working all day to put these images in my head on canvases which were mostly stacking up in my studio. I went so far as to begin pondering a career change when Thinkspace Gallery here in Los Angeles expressed interest in my work and offered to show it. After a few groups shows with them, things started to take off for me, both career-wise and creatively. From there, I’ve never looked back.

As you know, we’re big fans of you and your work. For our readers who might not be as familiar what can you tell them about what you do?
I make realistic oil paintings of people with animal heads, often set on the New York City subway. I grew up in New York and the subway felt like circulatory system of the city. I’ve long been fascinated with mythology, starting from the stories my parents read to me when I was a child and then furthered by looking at classical paintings of Greek Mythology. I loved how those stories presented imaginative versions of the world that I could dream into. I wanted to create my own contemporary version of that and eventually hit upon the idea of painting anthropomorphic figures with animal heads sitting on the trains I grew up on. I often include humorous visual elements that connect to the characters in the paintings to tell a story. I love the juxtaposition of this very refined and precise style of detailed painting with lighthearted imagery that makes me laugh. 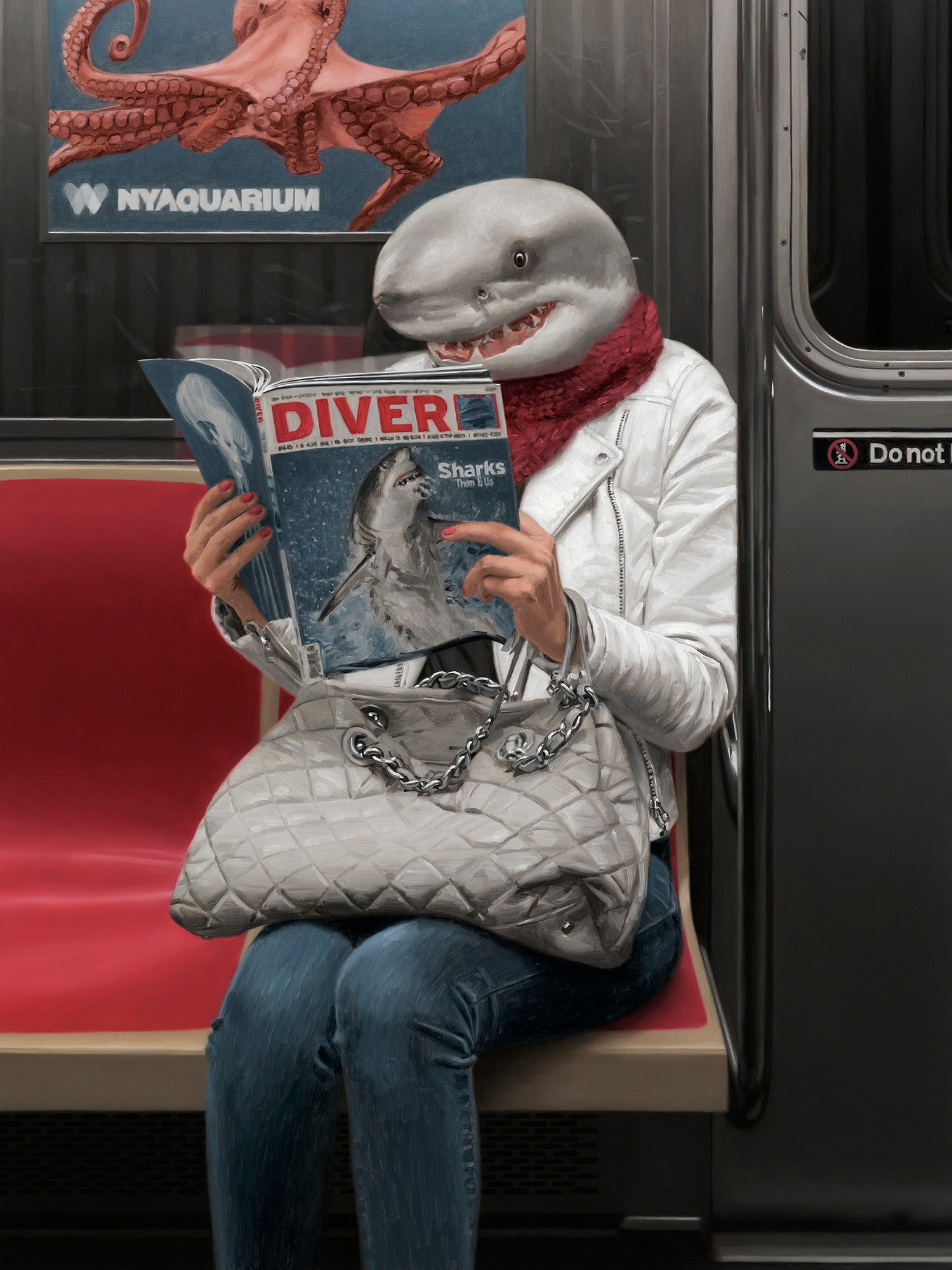 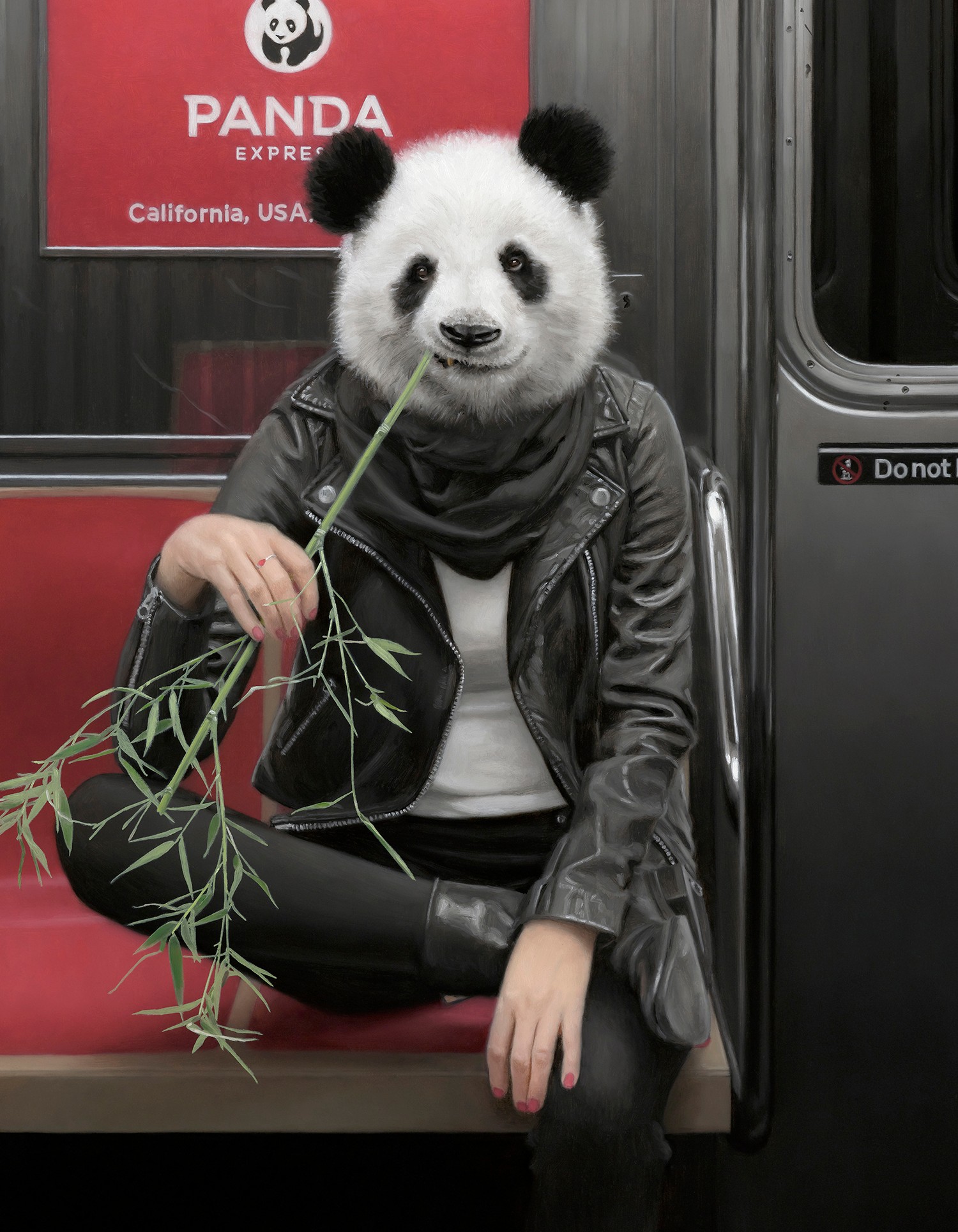 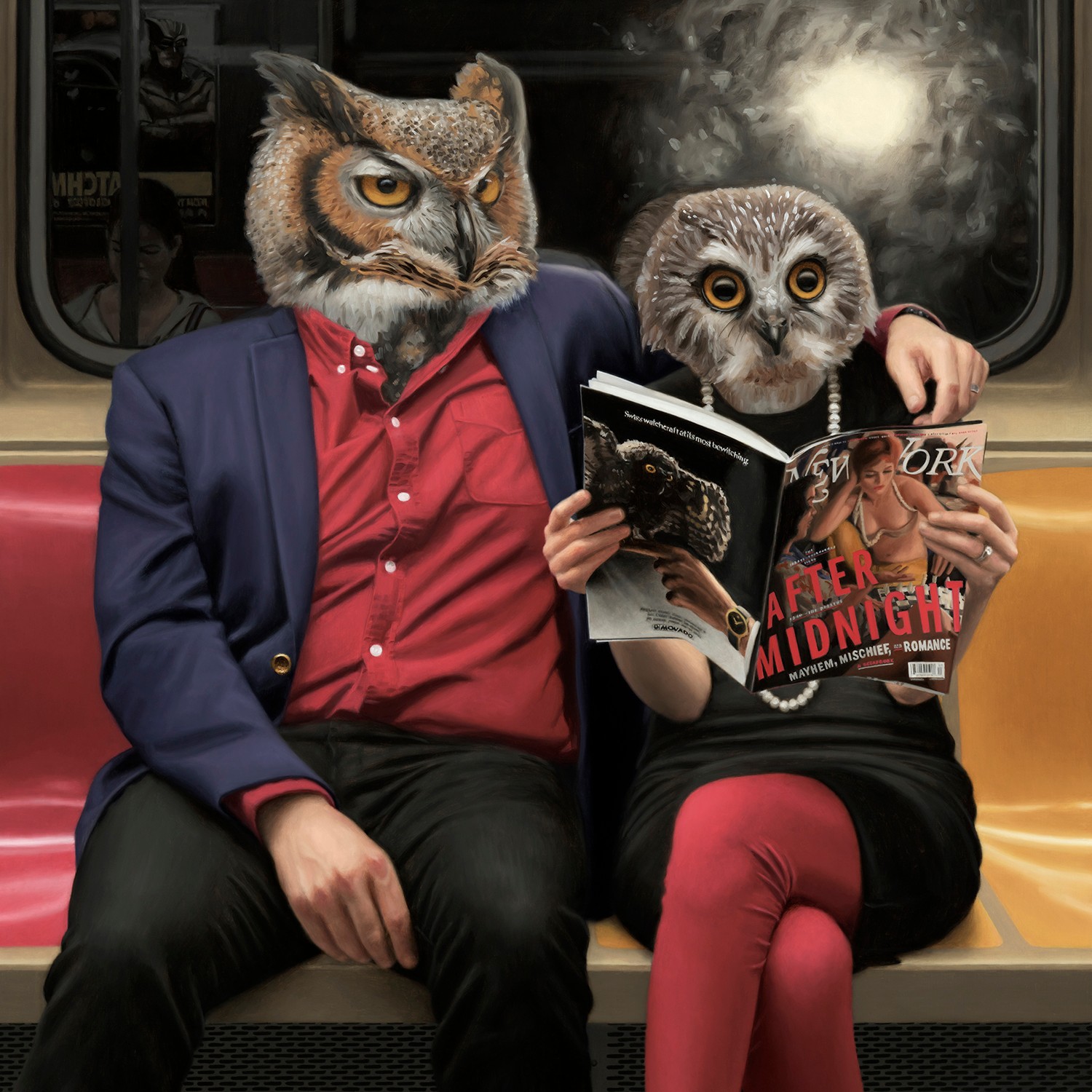 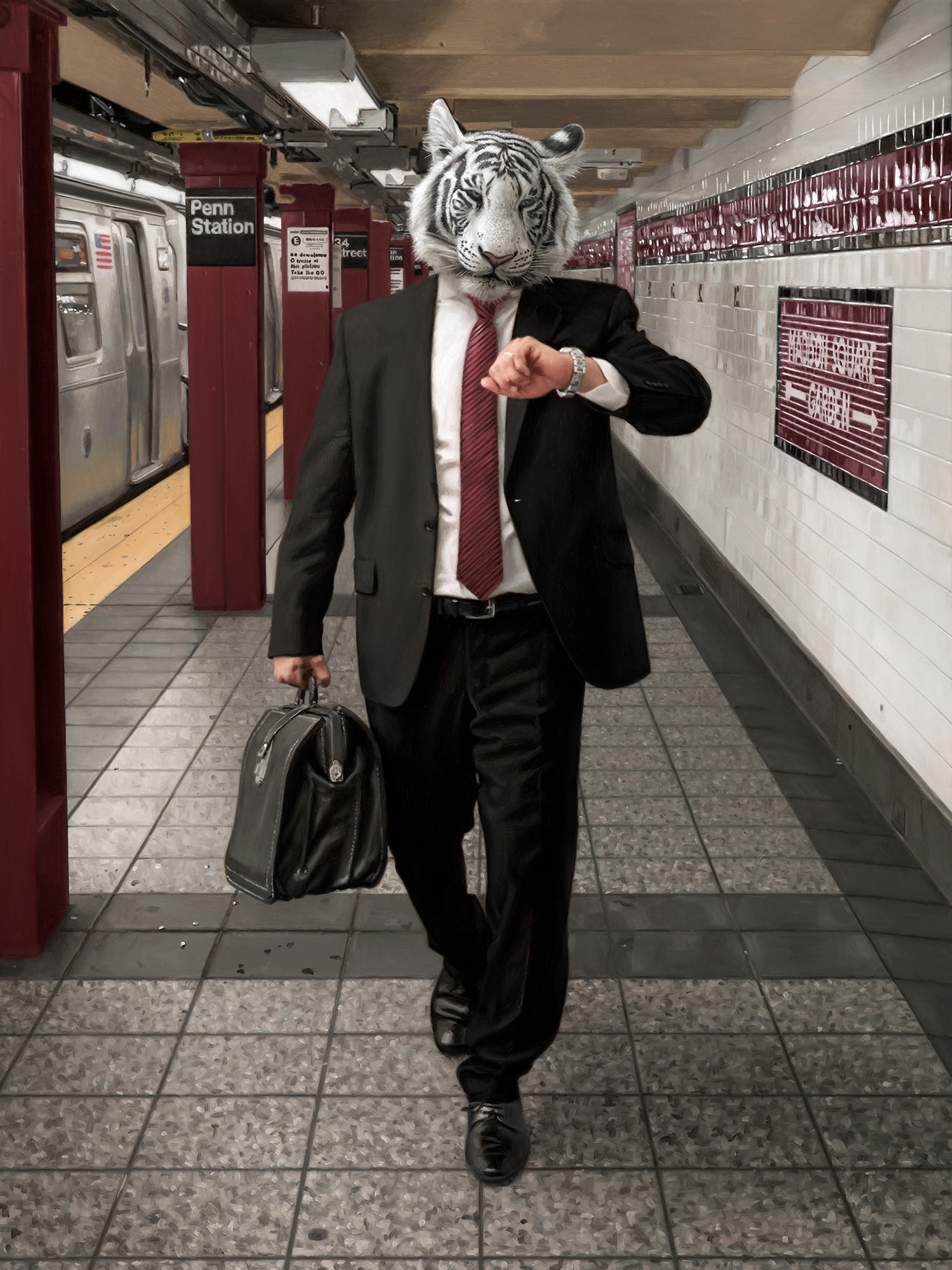 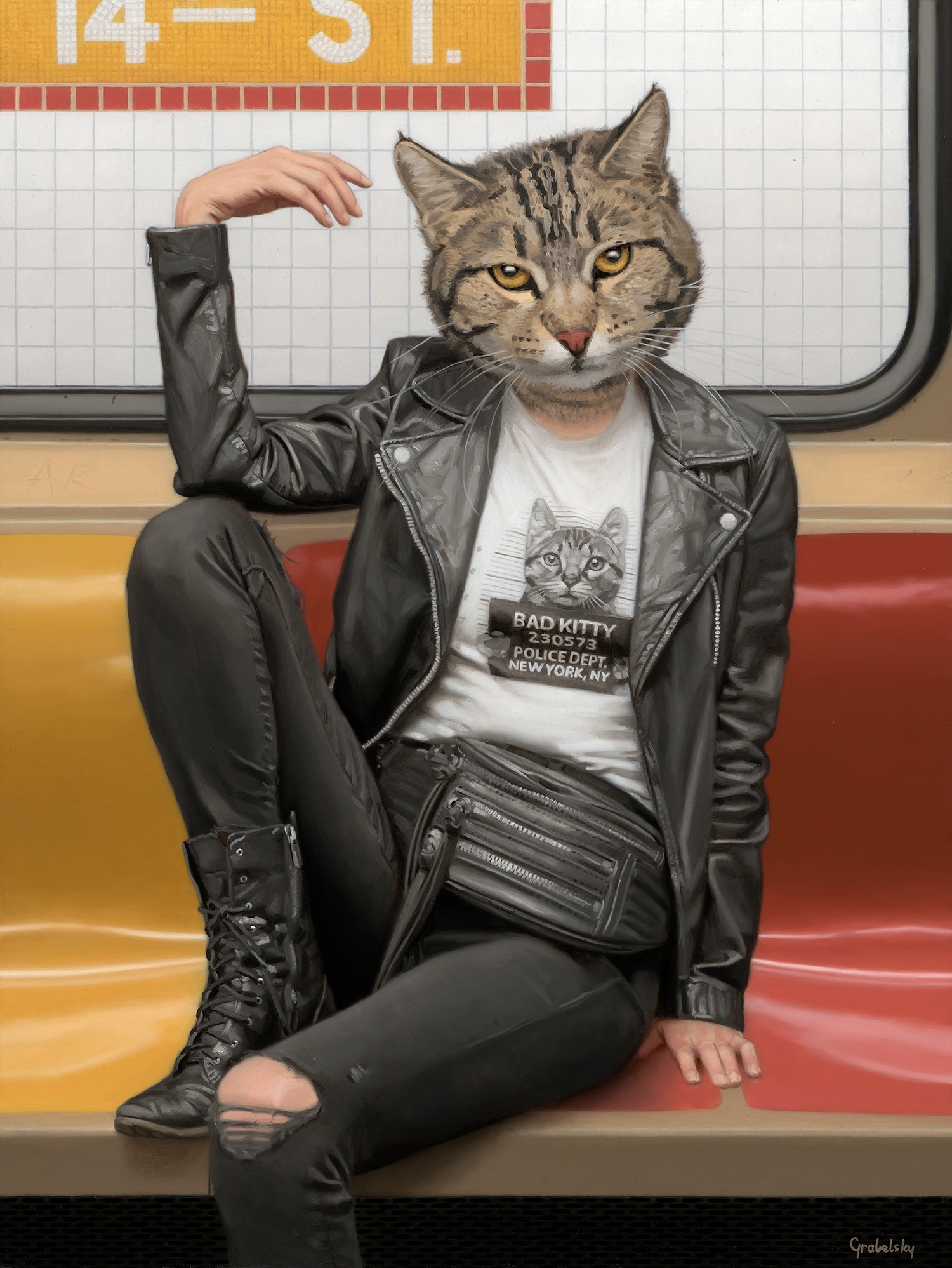 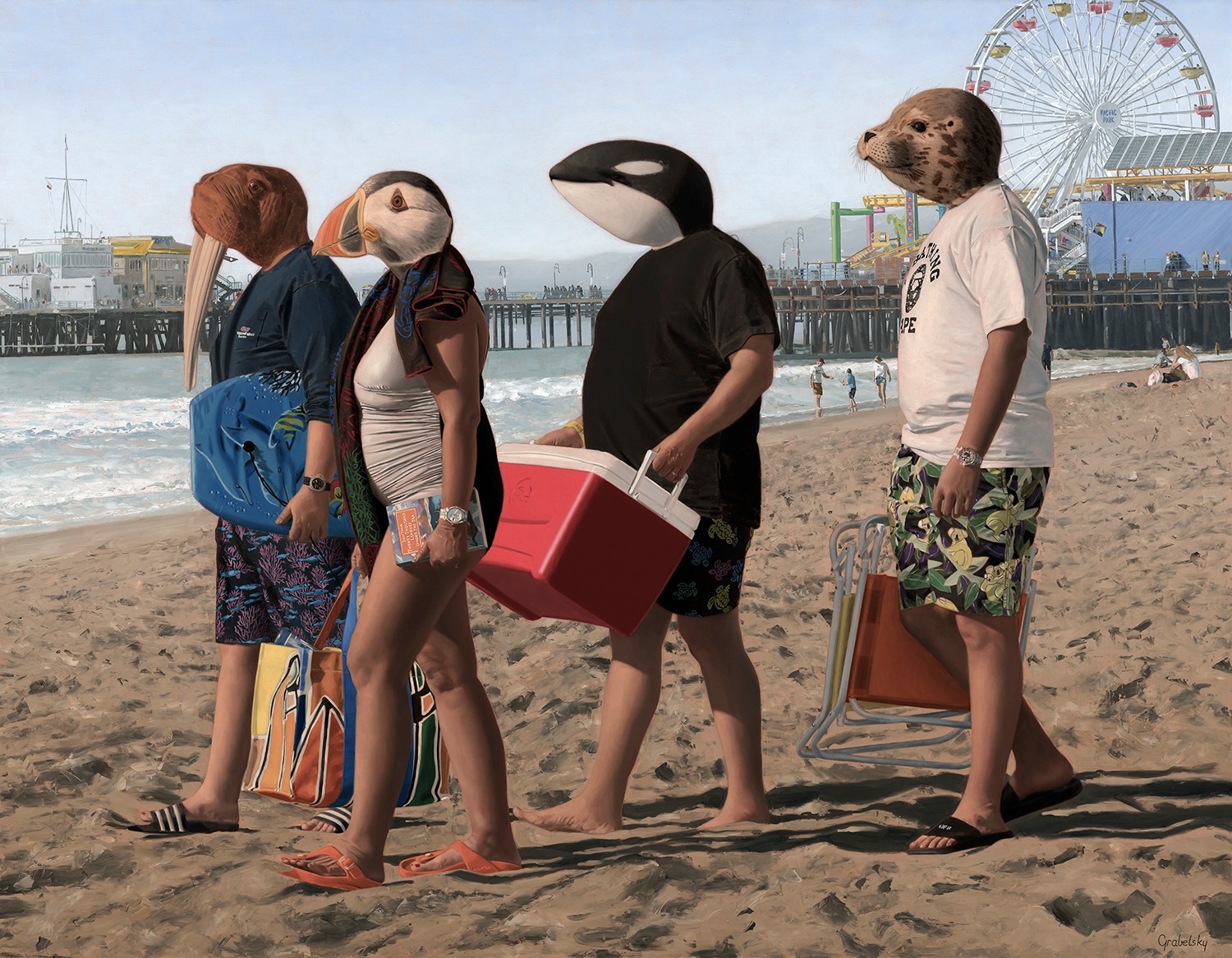 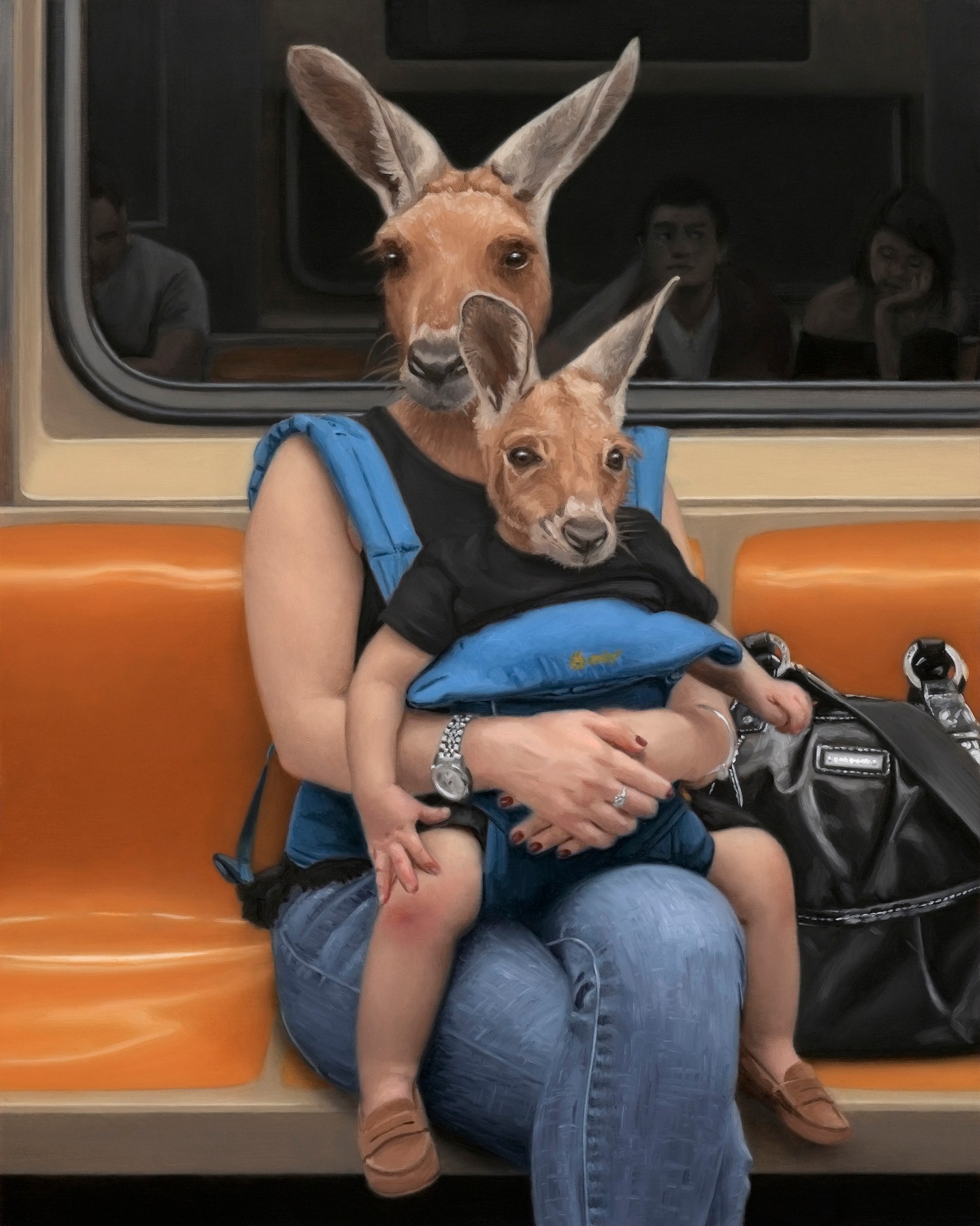 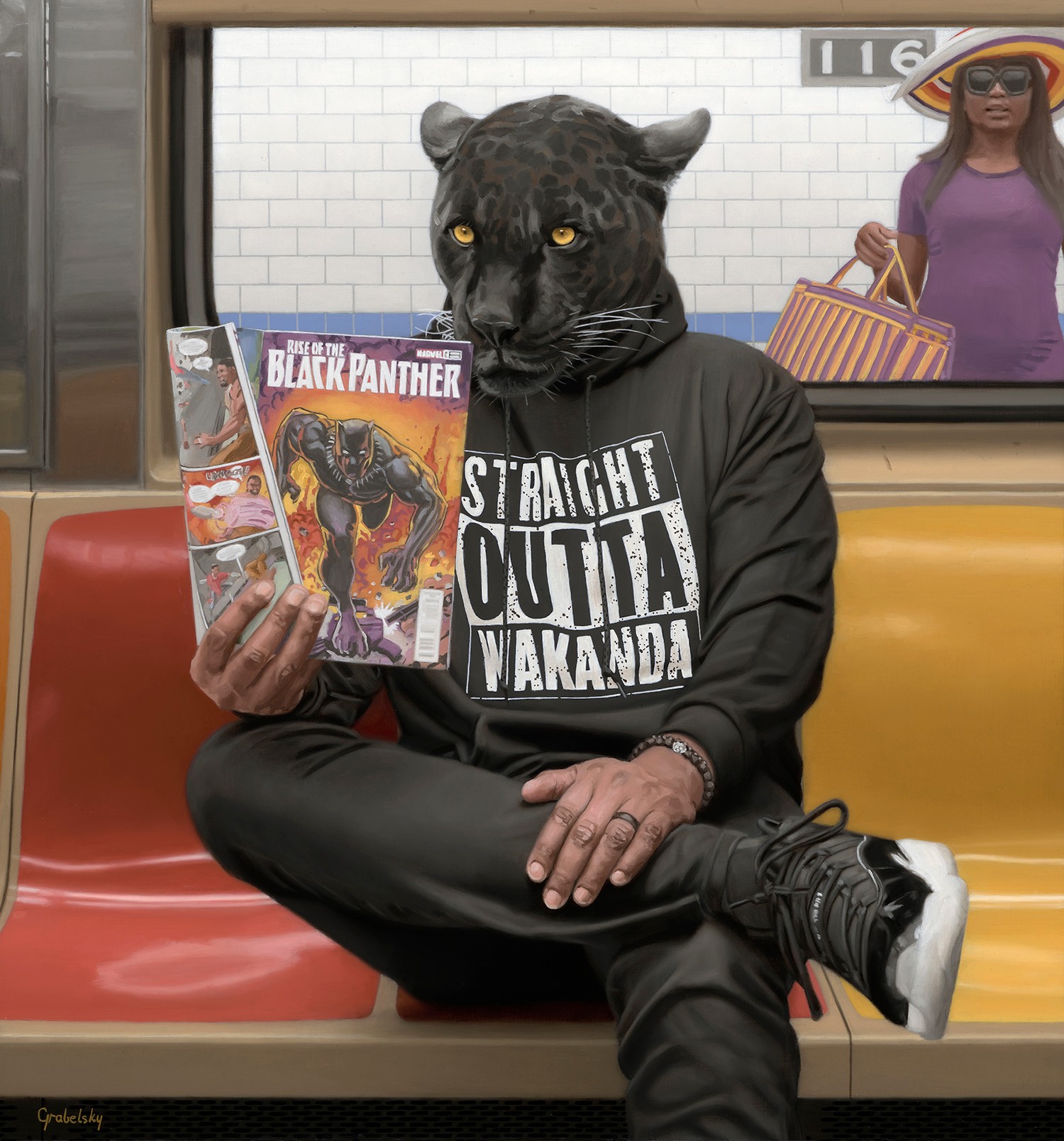