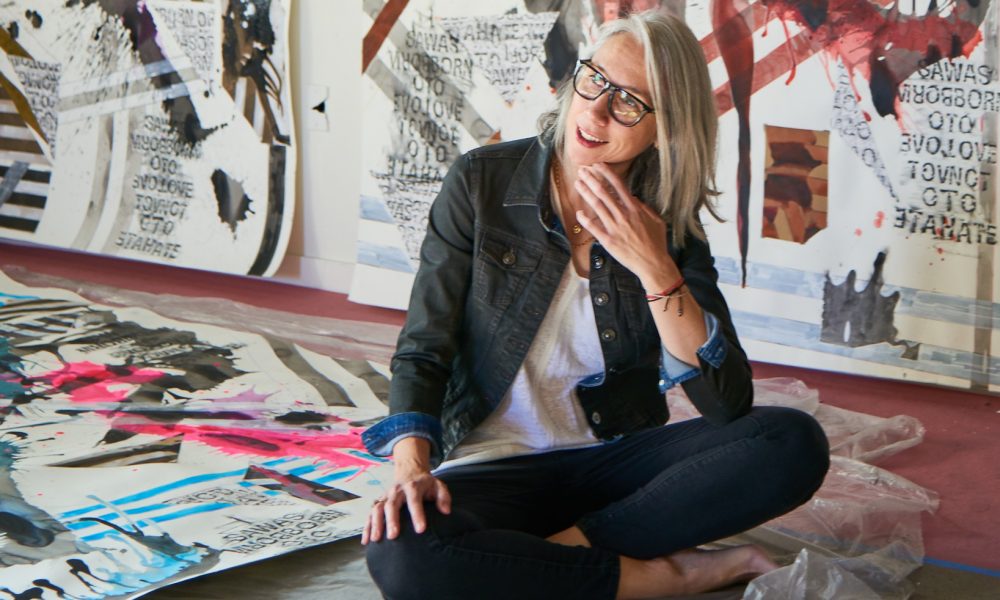 Today we’d like to introduce you to Alexandra Grant.

Alexandra, please kick things off for us by telling us about yourself and your journey so far.
I’m a painter that explores language and narrative as image. I began my career making large-scale works on paper that map out short poetic texts by the hypertext-fiction pioneer Michael Joyce, first exhibited at MOCA Los Angeles in 2007. In these pieces the words are backwards or in “mirror writing.” I wanted to challenge the idea of how we “read” a work of art. When your brain can’t make sense of words, it begins to look for other clues for how to interpret them: are the words in Helvetica or handwritten? What information can be gleaned from the context of a word or phrase? What emotions and intent are conveyed by graffiti as opposed to a billboard for dandruff shampoo?

While studying for an MFA in Painting and Drawing at the California College of the Arts (from where I graduated in 2000), the main question I asked myself was “what are the ideas that will interest me in the long term?” I knew that being an artist would be challenging and wanted to determine what themes I would want to engage when no one cared about my work (alone in the studio) or when everyone did (in the case of success). I realized that it had to be the same thing.

For me that “thing” was writing, the literary and poetic voices that resonated with my own experience. My father was an immigrant to the US from Scotland and I grew up with my Californian mother in Mexico, the US, France and Spain, so I didn’t have a sense of being “from” a specific place. I spoke Spanish as a toddler, French as a teenager. My interest in language and visual communication comes from a childhood spent crossing borders and switching languages and cultural codes, understanding how they both define and differentiate us as humans.

Can you give our readers some background on your art?
The literary theme I’m exploring right now is the Greek myth of Antigone. In the Sophocles version of the play, Antigone stands up to her uncle Creon, the king of Thebes and says, “I was born to love not to hate.” Creon has refused to bury Antigone’s brother Polynices, calling him a traitor.

Antigone insists that he be buried. “I was born to love not to hate” is powerful because she’s a young teenage girl challenging the king and state, asking that equal rights be conferred on her brother. She’s also claiming a moral stance that there is a law – in this case, love – that’s higher than the law of the state. My paintings quote this “quote” from Antigone but also the language of abstract painting – lines and stripes that conflict and dance with more organic spills of color. These compositional elements represent the tension between these two forms of law.

When I began this work about Antigone in 2014 I was thinking about the role of the individual in relation to the state. Then, with the death of Michael Brown in Ferguson, I saw the tragic image of his unburied body in relation to Polynices, which made the myth of Antigone relevant to many again. With the election of President Trump in 2016, standing up to the state saying “I was born to love not to hate” has taken on even more unexpected significance, given the many protests happening in this country from the Women’s Marches, the #metoo and #blacklivesmatter movements, and young people organizing against gun violence. These are all “Antigonal” moments.

Outside of the studio, I am committed to exploring the word love in a more hands-on way with my grantLOVE project, where I collaborate on and fabricate limited edition sculpture, prints and jewelry to raise money for various arts non-profits in Los Angeles and beyond. We’ve supported, over the years, the Love House, 18th Street Arts Center, Heart of Los Angeles (Visual Arts), Project Angel Food, and the Union for Contemporary Art (among others). I believe that arts education is a civil rights issue and that exposure to art-making and creativity can have massive impacts on communities in need and young people.

In your view, what is the biggest issue artists have to deal with?
I think the biggest challenge facing artists today is fear. I began this interview by describing my early work with Michael Joyce and then my current series on Antigone.

When you look at the images above – of “she taking her space” (2007, in the collection of MOCA Los Angeles) and my current paintings – you’ll see that I believe in gradual and constant change as an artist, in evolving style.

Who knew that the introduction of a ruler to my work would be the most radical thing I did in mid-career? So my advice is this: that in the face of pressures to remain, static artists, embrace change, confront their assumptions of what they think art can be and evolve to face the challenges of today, whether in relation to climate change, civil rights issues or self-care.

If there is any lesson that I wished I learned earlier it’s that as a female-identified artist, sexism is real in the arts. I now know that the lack of opportunities I’ve experienced has little to do with my value and worth as an artist, but because of institutionalized and naturalized gender-based biases. I have been told “not to show up pregnant” at exhibition openings by other professionals and that my “work has less (market) value” because I’m a woman.

And so, I relate to Antigone, because through art we can transcend the tests we’ve experienced in life and stand for the values we have in common as people: that we were all “born to love not to hate.”

What’s the best way for someone to check out your work and provide support?
Please follow me on Instagram to hear about the past and future projects and exhibitions. And join my mailing list.

For the grantLOVE project, we have a neon sculpture in the bookstore of the Underground Museum. You can also purchase prints on our online store to benefit X-Tra Contemporary Art Journal.

Last year I co-founded a small press called X Artists’ Books. The press came about in large part because I wrote The Artists’ Prison, a Sartre-esque story where the Warden is being deposed about all the prisoners interned there – some are artists who committed heinous crimes and some criminals sentenced to art.

Los Angeles-based poet and artist Eve Wood created darkly humorous images representing each prisoner. You can find this book and our other titles on our website (www.xartistsbooks.com) or from local bookstores like the MOCA bookstore, Otherwild and Arcana Books. 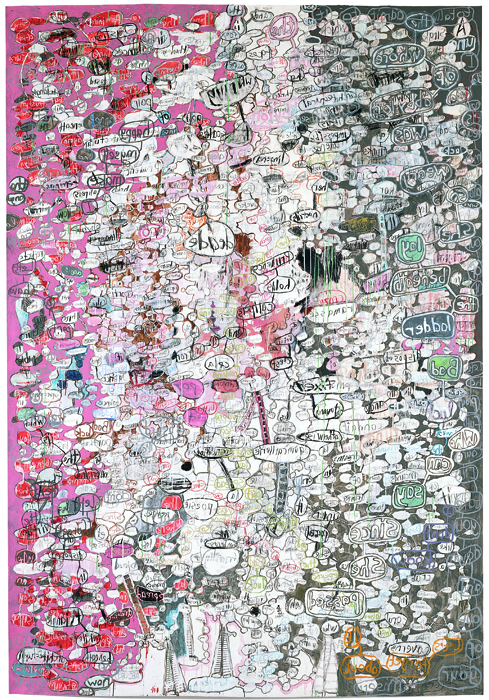 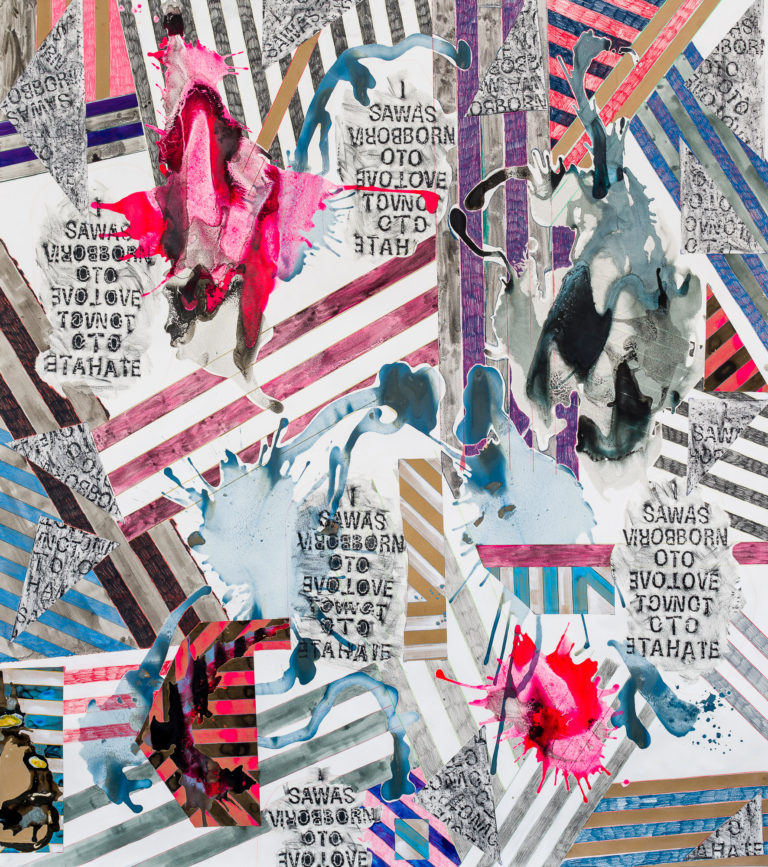