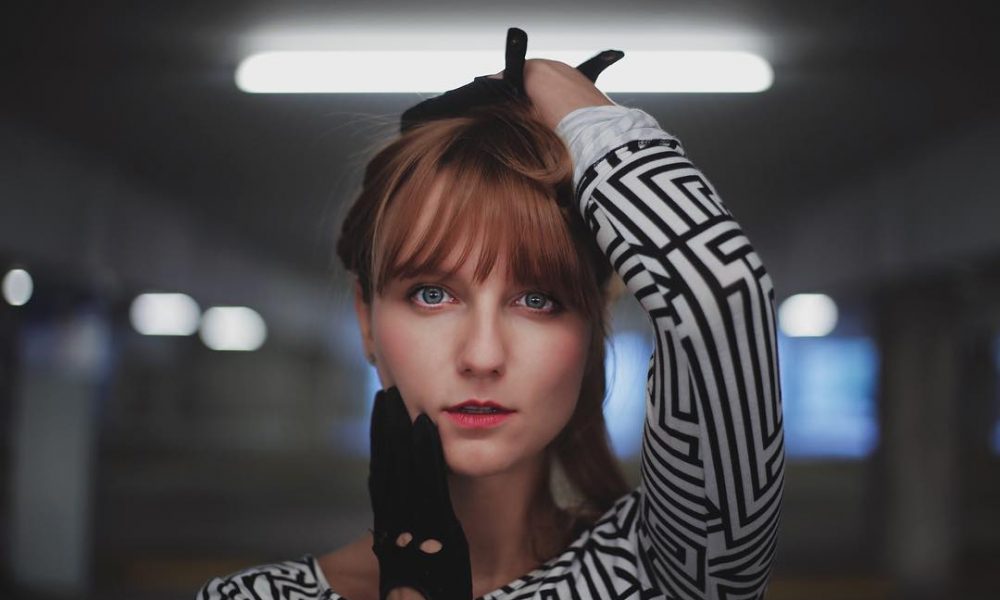 Today we’d like to introduce you to Xenia LeBlanc.

Xenia, let’s start with your story. We’d love to hear how you got started and how the journey has been so far.
Well, living in rainy Saint-Petersburg, Russia, Los Angeles always seemed like a distant, unattainable magical place that you only see in movies. I remember I first wanted to come to LA to pursue filmmaking when I was a teenager. I was planning to attend New York Film Academy for a short filmmaking course and was extremely heartbroken to find out that there was a fire on the Universal Studios backlot and they canceled the course I was going to take that year. Instead, I ended up going to London, UK to study Film Theory and stayed there for 4 even more rainy years.

In 2009 I got an amazing opportunity to work on a first Russian/Ukrainian 3D comedy as a script supervisor. It was quite a trip, literally. We shot for about three months all over Kiev and Crimea and what makes this experience even more unforgettable is that one of the lead actors in that movie is now the president of Ukraine. Haha. It blows my mind.

When I did finally come to LA, it truly did feel like I stepped into a movie. One day I found my way into a small theater called Playhouse West in North Hollywood that also turned out to be a Meisner-based acting school and that is how my in-depth acting journey began. I think that place truly elevated my understanding of what it takes to be an actor, not to mention I got to meet a lot of amazingly hardworking and talented people.

During my time there I also got hooked on improv and that led to creating a ton of sketches some of which ended up on YouTube and a couple of film festivals.

One day my friend mentioned that there is an audition happening for the Netflix series called Orange is The New Black. They were looking for a Russian actress. I asked my manager to submit to me and honestly didn’t think I’d even get to be considered. A day later I receive an email with a request to tape for an even bigger role I initially submitted for. It was to play a younger “Red”, a character played by Kate Mulgrew. I submitted my tape without any expectations whatsoever. The next thing I know I am on the plane to New York getting ready to film for an entire week on a show I loved most at the time. It was truly a dream come true. I still cannot believe sometimes that has happened. My family likes to joke that I left Russia only to end up back in Soviet Union. haha… because that is where most of the action takes place in the story.

Great, so let’s dig a little deeper into the story – has it been an easy path overall and if not, what were the challenges you’ve had to overcome?
I don’t think anything about living or pursuing your career or dream in LA is in any way smooth for anybody. I definitely struggled and continue to struggle a lot. But that is part of living the dream. At least that is what I keep telling myself. I think for me the most challenging thing for me is to be a foreigner in a country that speaks a completely different language and has a completely different viewpoint on a lot of things. For example, I love dark humor, cause it’s like the main attribute of any raised-in-Russia human. But after moving to US, especially LA, I quickly realized that not everyone who chuckles at my snarky comments is actually enjoying it. Haha… So I had to tone it down a bit. But then it’s not exactly me, so I have to balance it out.

As an actor, it can truly be quite a challenge to change the way the industry perceives you. To them, you are a foreigner with a heavy accent. You really have to prove yourself a lot. But I think that can be a very positive thing because it makes you stand out and pushes you to figure out things quickly. Like in filmmaking, you have to understand what kind of audience you’re making your project for and the faster you learn it the clearer you’ll see what to do. That being said, I discovered that the American audience is very different from the European one. I feel like in here, especially in acting, it’s more about ‘showing’, rather than ‘internally experiencing’, if that makes sense.

What moment in your career do you look back most fondly on?
Recently I got to write, co-produce, direct and act in a comedy series called Gritty&Pretty that we co-created with Kelly Russo and Nicholas Acosta. We had to run a crowdfunding campaign on Seed&Spark and actually got almost all of the money we asked for. I truly feel proud of what we were able to accomplish with what we had. I did feel like I took on just a little bit too much onto my shoulders but with the support of my amazingly talented friends we ended up creating something beautiful. The show is in post-production and is scheduled to come out in January. 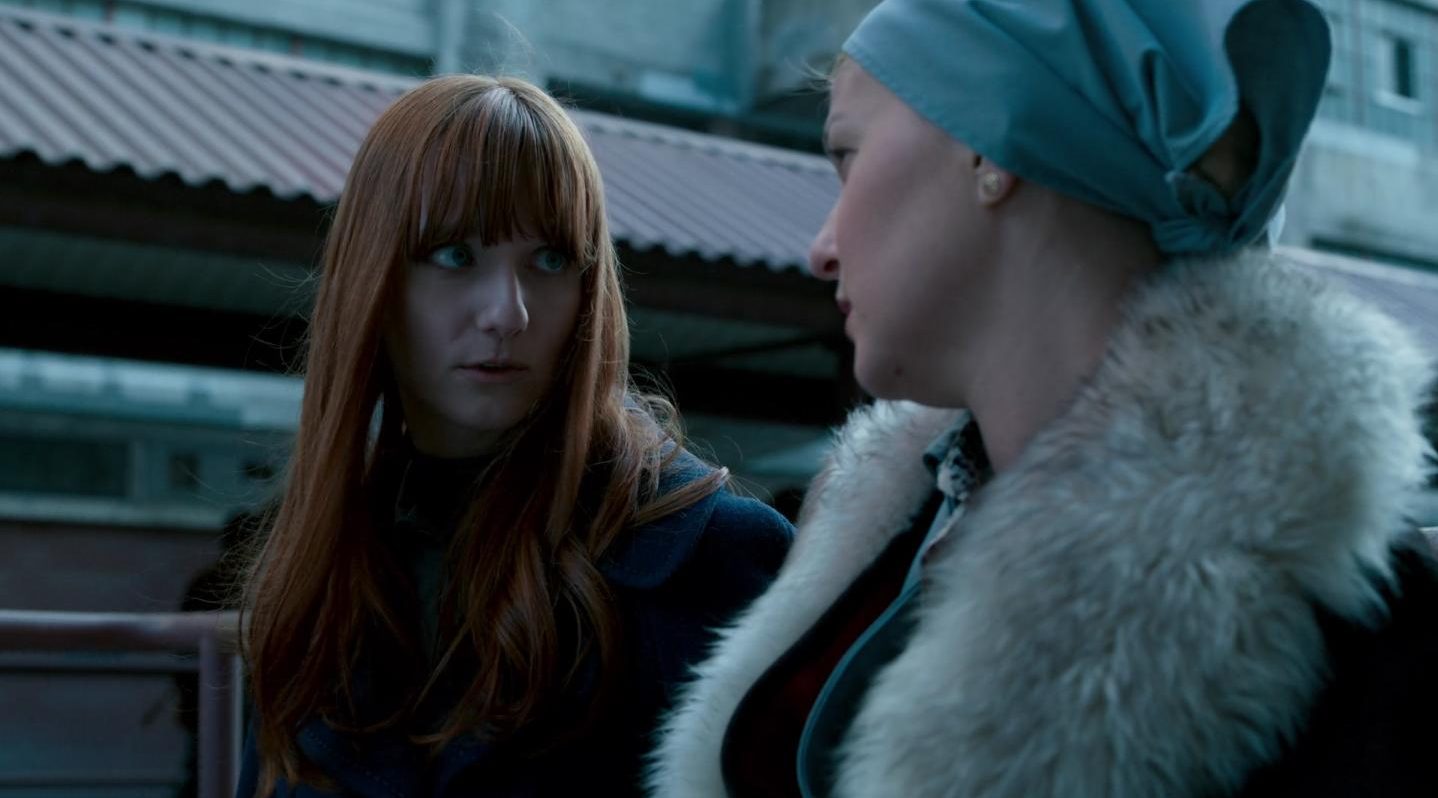 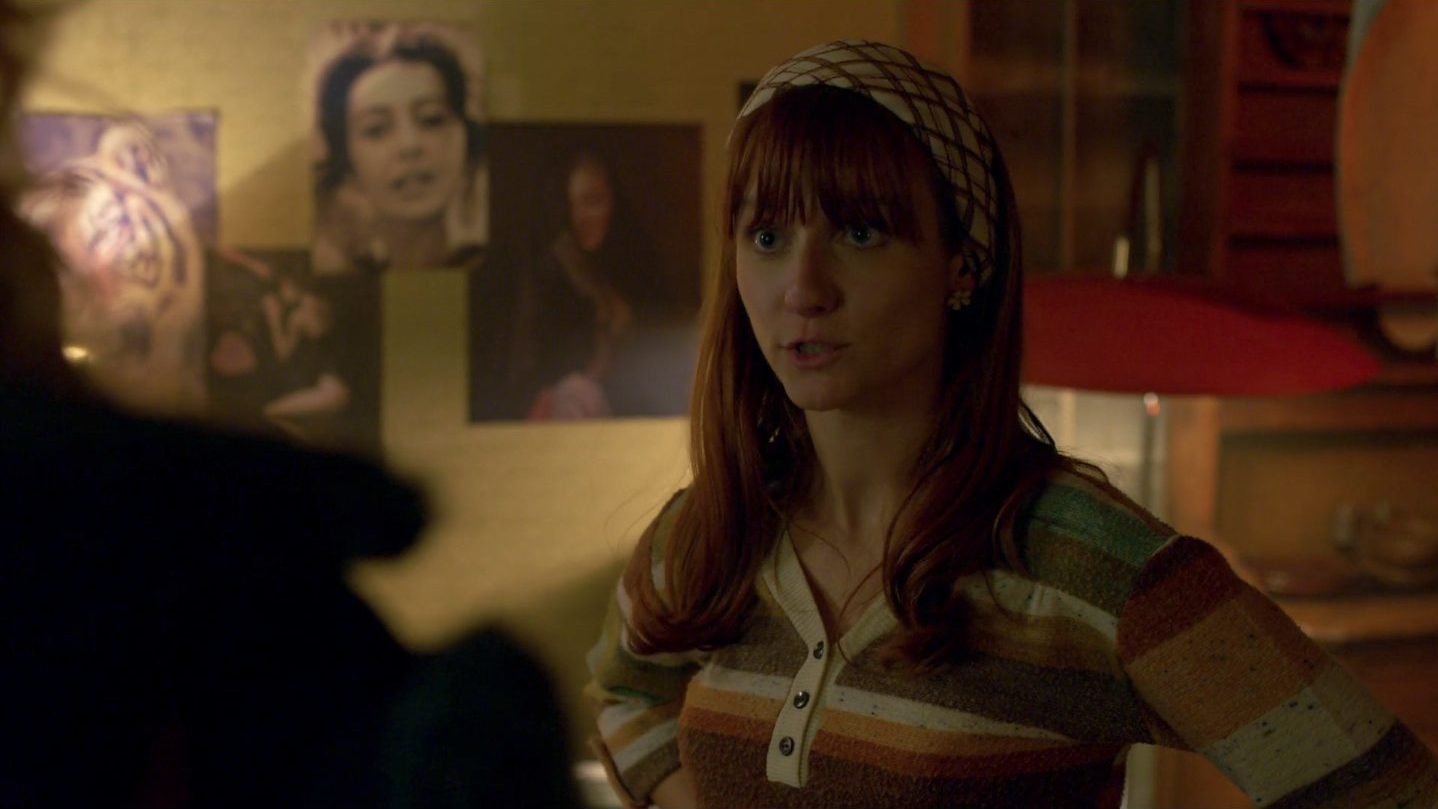 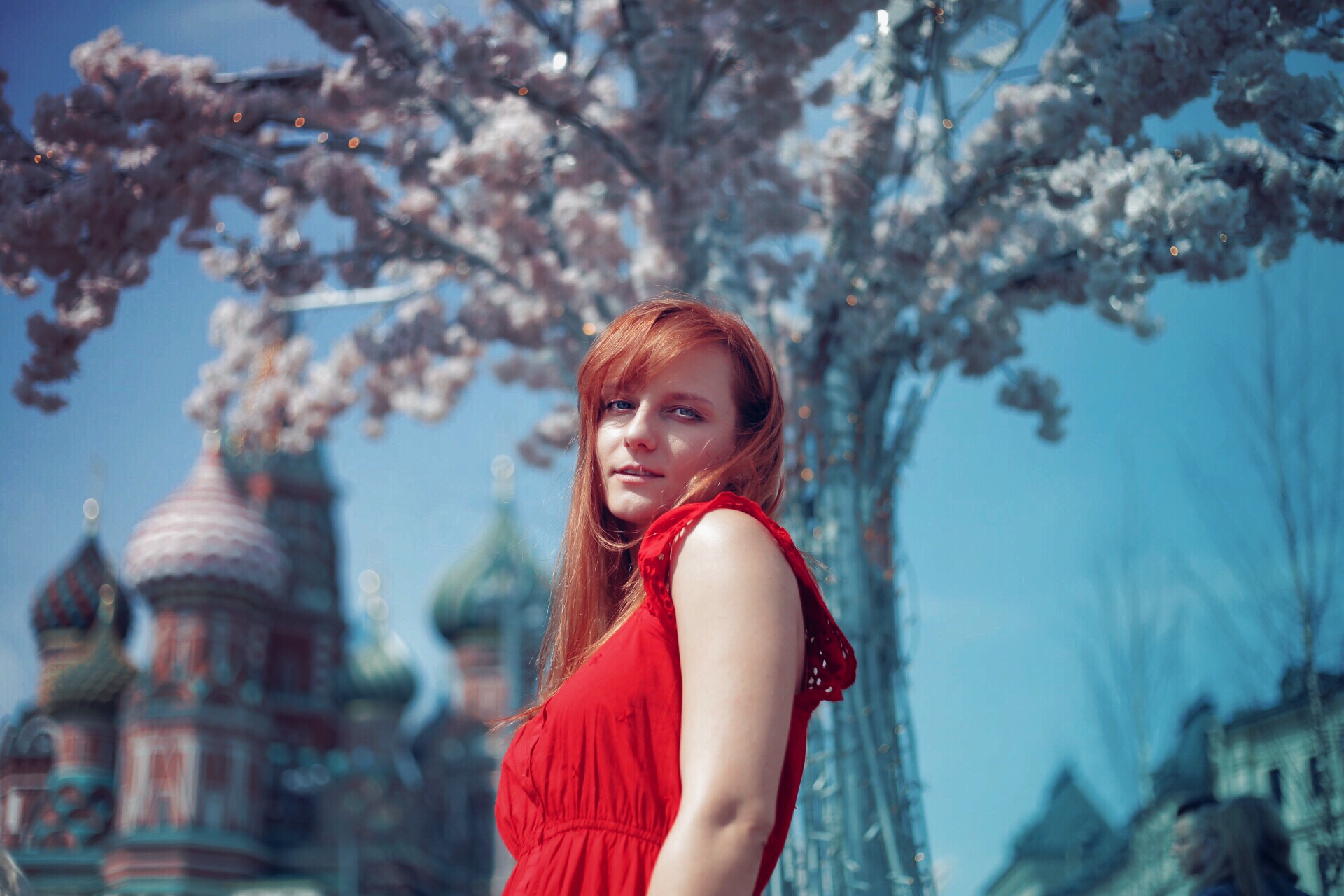 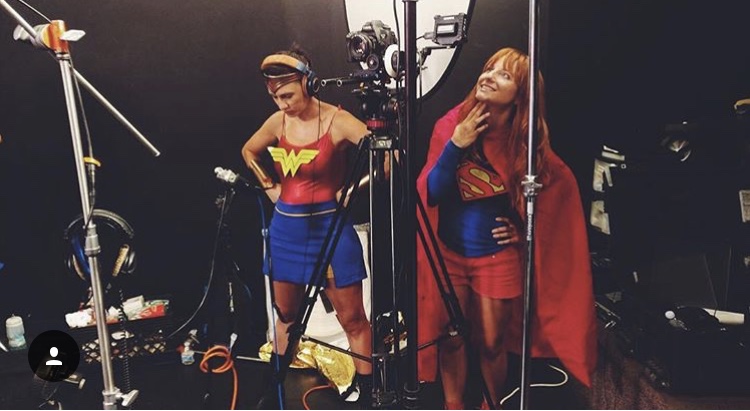 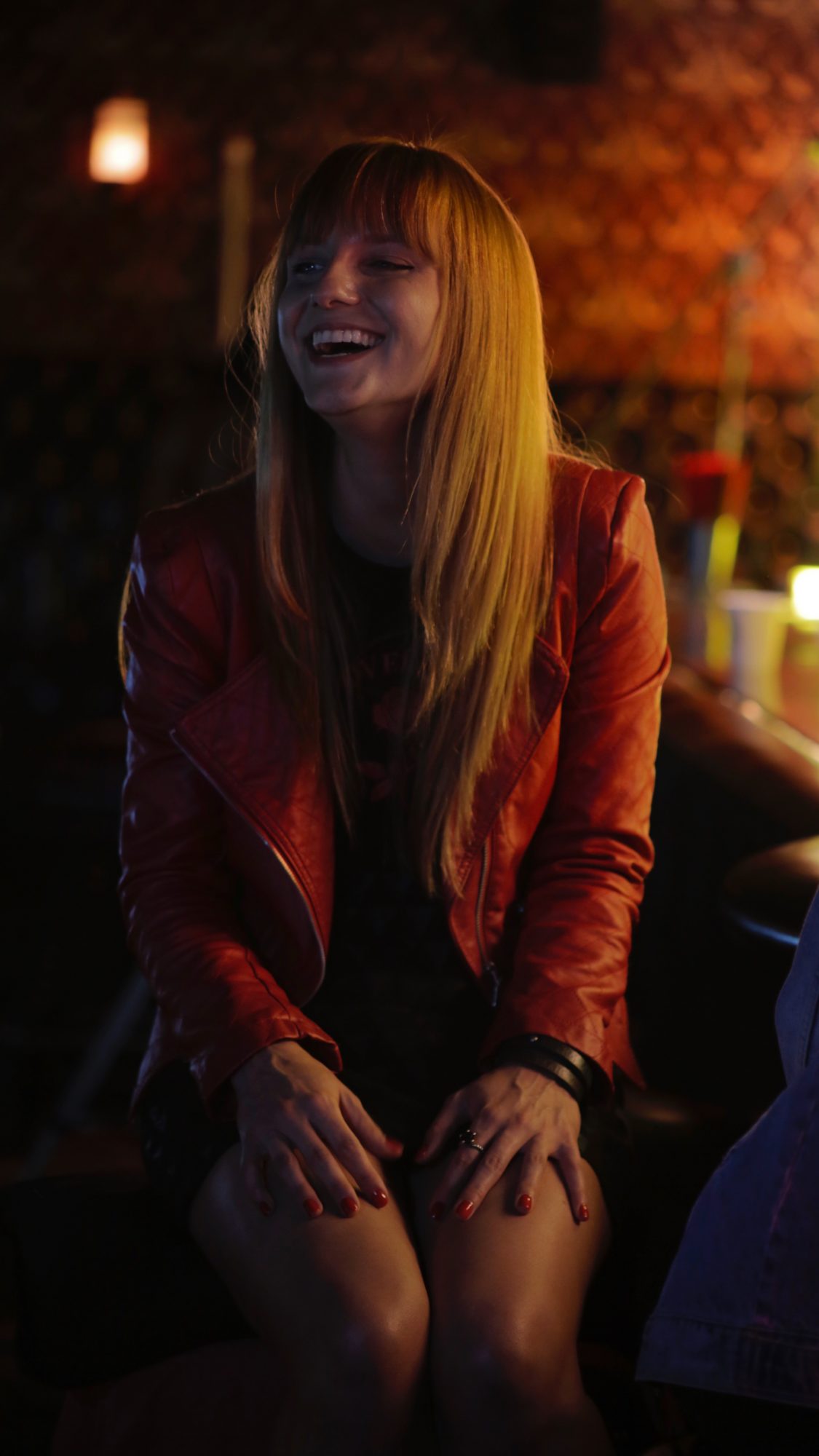 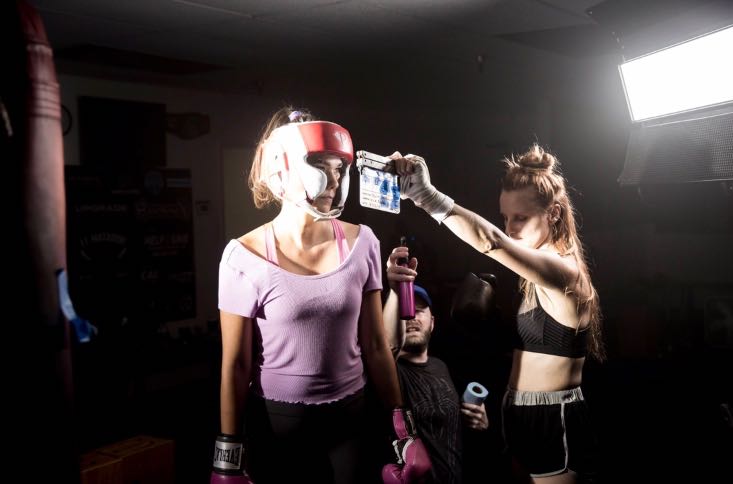 Image Credit:
All of the cinematic screenshots from Orange Is The New Black should be credited as “by NETFLIX”
The scene shot of me in a red leather jacket is a snap from “Man Eaters” an award winning short action film by Nicholas Acosta
The superhero photo is from the set of a Broken English sketch shoot with Azize Erim.
The main horizontal portrait submitted as the main photo is taken by Nicholas Acosta
The vertical laughing image from set in a red leather jacket is taken by Adam Gotsens
The horizontal portrait in a red dress with blue background is a self portrait taken by me.