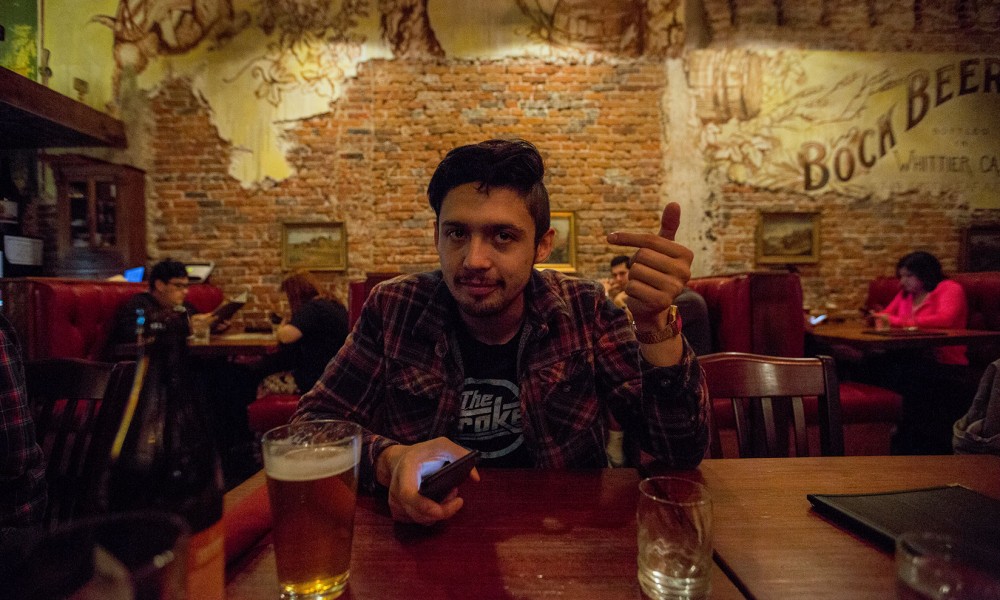 Today we’d like to introduce you to Dario Sebastian Garcia.

Dario Sebastian, please share your story with us. How did you get to where you are today?

I feel as that so many different moments got me to where I am today. Cameras always excited me, I remember as a kid being amazed that there was such a thing as underwater disposable cameras. Art was always the reason I enjoyed school, at first, it was only music, I started playing alto sax when I was in Middle school but it was my sophomore year of high school where I need to give credit to a good friend of mine, Adrian Garcia. He invited me to a photo club on campus and it reignited something in me I’ve been chasing ever since. That high school also gave me a mentor, the late Tim Keeler, I was the only one who took his class more than once mostly because I basically became his assistant. He gave me the foundation I needed, I’ve still accidentally called him on his old cell phone number looking for his advice.

After high school I bounce around a lot. In 5 years I went to 5 different schools, taking whatever fun or interesting art class I could find while doing general education. One year at San Francisco State University, where instead of just shooting 35mm film I starting making pinhole camera and shooting on tin cans for my final. As much as I loved the city, that school didn’t work out, maybe I was just too immature, I was only 17 when I got there, but I just didn’t really fit in. That summer I reconnected with my dad after going 7 years without saying a word to him. Not going back turned out to but a blessing in disguise I guess because I also had a small window to connect with his dad, a great photographer himself. He passed away that summer on my 19th birthday. He passed along a few cameras my way, even a super-8, and a projector. That following semester I enrolled in a few classes 10 minutes away from where my Abuelo pops lived at East Los Angeles City College. The general education there was not quite what I was looking for, but there I took my first studio class. Man, once you learn how to see light in a studio you can’t ever un-see it. I duel enrolled at Fullerton Community College, taking GE’s with a great professor and the occasional scuba diving class. At one point I was going to both school and working 3 jobs I didn’t really like. Until one of my bosses said I should quit photography, take time off school and join David in the accounting department.

I had to quit, my conscience couldn’t let me stay there. We stayed close friends, though, I even photographed her daughter’s birthday a few years later. But in that moment I understood that I needed to focus what I was doing. So I worked hard for a semester or two until I was accepted into California State University Fullerton, the only school in southern California with a Photo Communications major. It seemed like a better fit for me, but I still wanted more so my second semester I studied abroad at Dong-ah Institute of Media and Arts in Anseong, South Korea. I made great friends I can’t wait to see again one day, but one of the best experiences I had there was working for a Photo Studio in Seoul called Camera Work. I found myself half way around the world working internationally in the field I hope to grow in. Growing up in a family with a duel culture I’ve learned how important it is to embrace our differences, and if my camera can take me anywhere new how can I complain? I now have just one semester left before I have to figure what to do with the rest of my life, that is, at least how some of my peers put it. I know I want to keep doing two things with my camera. One is putting lights in front of people and controlling every inch of the frame. Nothing is more satisfying than shooting an image you can see in your head, and that control is key. And number two is abandoning that control completely, is going out into nature and using what I know about light to create something beautiful out of the world around us.

When you look back, can you point to a period when you wanted to quit or a period that was really frustrating?

I’ll highlight two moments about quitting, the first happened a few years ago while I was working at a part-time job. At first, I was working phones, and talking to people but a few months in they moved me into the office to file paperwork. Now this story really isn’t about me feeling like I wanted to quit photography, rather my boss was asking me to and instead take an accounting course with one of my supervisors. I mean money wise, this was definitely a promotion, but it wasn’t in me for a moment to give up what I love to do to work in a cubical instead. This next story actually happened just a few months ago. I’m even a little embarrassed to tell it. I now own a 5D Mark three as a paperweight. I only had that working camera for a little over a year maybe, when I took it to Laguna. I was supposed to have a shoot that day but there was a cancellation and I was already in the area so I thought why not go down to the water and shoot the sunset because I had already spent the gas. I make my way down there and there are a few other photographers doing their thing and we’re all having a good time. The sun drops passed the horizon and the waves are starting to pinch us up against the cliffs. I broke my tripod down with my camera perched on top of it and headed back the way I came. I was trying to count the wave sets before I crossed a long slippery rock shelf. The big wave hits, and I start to rush across trying to focus on my footing when out of nowhere a second wave knocked me to my knees then a third basically into the water. I was really lucky to have made some friends that day because they pulled me out before anything worse happened.

The only thing that made it without needing repairs was my memory card. (that’s why I included that beach photo because that was from that day) I was really lucky to have won the V.J. Lovero Photojournalism Scholarship through my school the same week I photographed an event I was paid pretty well for. I had to dip into my savings but I found a steal on craigslist for a replacement body and am going to have that lens paid off by the end of September. That first night when I basically lost all my gear was a pretty deep low for me, it shook me but I wasn’t ready to quit. Instead, I booked a few shoots with an old Rebel camera I started on and a 35mm film camera and just kept shooting. Maybe those beach photos will pay for themselves one day but for now, they are a reminder to always respect mother nature, because as beautiful as any landscape can be, circumstances can change very quickly.

I’m actually planning to bring my new gear back to the water, in a few months I should be fully certified to scuba dive and I will definitely be investing in a watertight housing.

What would you tell someone who is just starting out?

I started off in the art world as a saxophone player and I still have some of my closest friends who work in the music industry but some of our long talks about art in LA have been about the struggles, whether it’s about us complaining about our day jobs or not feeling like anyone is recognizing our work what it always seems to bubble down to is that we love what we do for what it is and how it can connect to the people around us. So to those of you wanting to get started, I’d say make sure you support other artists and help us create the community that we all want to see. There is an African proverb that I think fits LA’s climate which goes, “If you want to go fast, go alone. If you want to go far, go together.” Neither is the right or wrong way to live or to work, but art and community go hand in hand so I think it’s important to try to remember how to live with both of those ideas.

What are you looking forward to?

LA is a great city, who knows where I’ll end up settling down but I hope that my photography can take me to see as much of the world as I can. But what I am really excited for and I’m working on making part of my future, is the day when my photography creates my autonomy. It’s going to be such a pleasure to get to a point where everything I need and everything I want are funded by everything I love. I know not every artist gets to that point, but once I sink my teeth into an idea there is no stopping me.