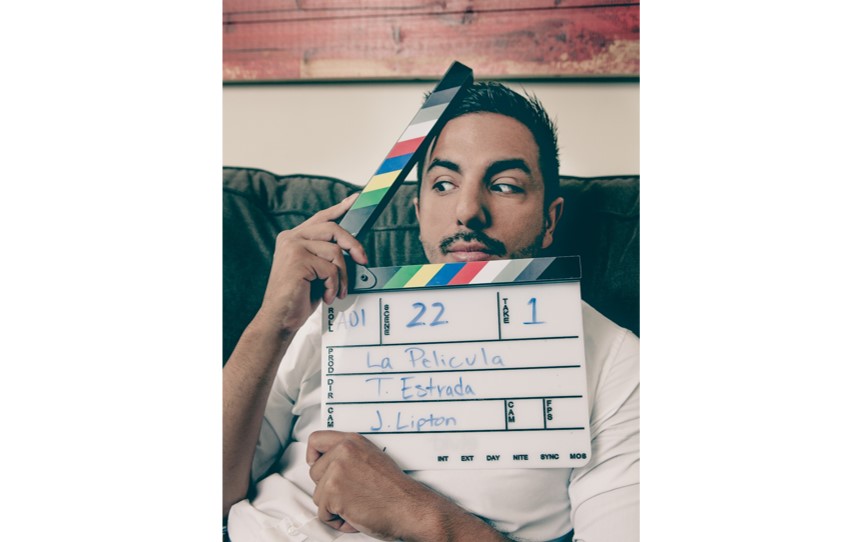 Today we’d like to introduce you to Tony Estrada.

Tony, let’s start with your story. We’d love to hear how you got started and how the journey has been so far.
After I graduated from University of Michigan, I taught film, photography, and sophomore English Literature and Grammar at the high school I attended. During my time teaching, I developed my first short film, Martha Cook, and looked for my first “foot in the door” into Hollywood. Halfway through, thanks to a great friend of mine, I was able acquire an internship at MGM in the development department under Matt Dines. Every Friday, I went to MGM to learn and grow my career.

During my internship, I was offered a job working for an independent producer, Adam Saunders (“About Alex”, “Shimmer Lake”), so I left my teaching job and moved to DTLA. It was an incredible learning experience and taught me so much and Adam has become an amazing resource for me to continue and learn to grow. A month in, Adam went to shoot “About Alex” in New York and put me under the guidance of Lee Toland Krieger. I worked for Lee as a hybrid intern/assistant where he taught me, through osmosis, how to be a successful director at the studio level.

In addition to this internship, I procured jobs on the side as a nanny, an assistant to a socialite, and every once in a while, aiding my godfather in installing windows, while ensuring that I was around whenever Lee called on me. I did what I had to, to make sure that I kept learning and growing. I am so thankful for that growth period.

Eventually, I hit a sticking point in which I ended up moving in with my brother in Rancho Cucamonga. While living with him, he loaned me his camera to shoot internal corporate videos where he works, Niagara Bottling. I continued shooting videos for them and eventually kept coming up with new ideas and helped them grow their media presence for their internal communications. Concurrently, I shot my next film, For My Youth the Bell Tolls, with the help of my family and what was in my piggy bank, and that won the Audience Award at We Like ‘Em Short in Baker City, Oregon, an incredible festival that I loved being a part of and am so thankful for that first opportunity they gave us. That award sort of validated what I saw for my future, making an artistically geared film that was equally crowd pleasing. I recognized that the work I did could combine the artistic and business paradigms and that’s exactly what I aim to continue to do. While I was with my brother, I began developing my most recent short, Bridesman, which was released to the public this year through FilmShortage.com.

After the success of that work, I became certified as a personal trainer and moved to Hermosa Beach, where I continued to grow my business, while simultaneously serving as a nanny to a new family. In the middle of this transition, we shot Bridesman, with Danny Trejo. These first few months in Hermosa Beach really kickstarted a journey of intense personal growth that helped me get to where I am now—about to enter pre-production on the Brides man feature; in development of a new short, ¡Viva la Revolución! and continuing to grow my business with clients, such as CBS and Niagara Bottling. It really has been an incredible journey up until this point.

Great, so let’s dig a little deeper into the story – has it been an easy path overall and if not, what were the challenges you’ve had to overcome?
Not always and that is where the beauty in this journey lies. There are so many twists and turns, highs and disappointments, that I can’t help but get stronger every day. Each difficult moment teaches me something new and pushes me toward a new level of growth in both my personal development and as a business owner.

With all businesses and general entrepreneurial efforts, there come growing pains and I have had my fair share. I think just taking risks constantly, whether it be financial or opportunity wise, has been the toughest thing. Fear is what drives so many of us to quit or say what we’re going after is not worth it, I feel that negotiating that fear, owning it and most of all, trusting myself and my instincts, has been the most challenging part.

Please tell us about QEE.
My mission is to provide a voice of unity to people, through my writing and directing, behind one common goal of growing and developing to make this world a better place. I try to do that in both my narrative and corporate work.

With my narrative work, the specific goal I’ve chosen is to elevate the Latino voice, not by making films that only the Latino population can understand but by incorporating intrinsic Latino elements and characters and most of all, developing grassroot story elements that are generic enough that any American family can relate to. The characters in my stories just so happen to be Latino and I may or may not throw in some references to my culture, just like “Spy Kids” did for Latinos, “Goodfellas” did for Italians, and “My Big Fat Greek Wedding” did for Greeks. I love bringing out our differences yet still recognizing that we all still have the same innate human needs and desires.

Similar to my narrative work, my corporate work has been focused on getting clients’ messages across in fun, thoughtful and innovative ways. At the core, I’m trying to infuse the ‘old school’ corporate videos with the characteristics of movies from every era to create something unique. Whether that’s promoting training by paying homage to Kurosawa Samurai Films, or just stylizing the editing and camera movements to give new life to their messages. It’s a commercial/music video take on what can sometimes be the not so fun stuff to talk about with employees.

Do you look back particularly fondly on any memories from childhood?
I remember most vividly the summers on the neighborhood where I grew up. There were 13 or so kids on the block and the summers were a kid’s dream. We’d have neighborhood wide water wars, play cops and robbers or capture the flag late into the night, build forts the size of our living rooms, while playing “Super Mario” and face off in ‘mini bats’ almost every day, which was essentially baseball with the little souvenir bats from Dodger games and a duct taped beanie baby. Everybody on the block seemed to be ‘in’ on letting us kids play.

I had a really happy childhood. Looking back, it was awesome to see how my imagination was allowed to run wild and how we usually found a way to make any idea happen. In an instant, I could be chasing down a bad guy, like my dad, and a few minutes later I could be hitting a homerun for the Dodgers on a rainy day (that’s when we played with the sprinklers on). We did it all, whether it was through the games we played or the movies we made with my parents’ camcorder. We created, we watched each other grow up, and most of all, we had so much fun.

Where do you see your industry going over the next 5-10 years? Any big shifts, changes, trends, etc
There’s a major push toward — and a need – for more diversity in Hollywood. Executives are working toward telling stories that are reflective and proportionate to the US population; however, I don’t believe or feel that this way of thinking has really taken hold yet. I feel current events in the United States will push the business forward to take more chances on chronicling diverse stories. Take a look at the way Charlie Chaplin was able to cross the border between people born in the United States and newly arrived immigrants. It’s a similar story that needs to be told, in the way that those boundaries need to be crossed, and Hollywood is attempting to do so, yet it needs more voices from various cultural backgrounds to do just that. Moreover, with streaming services like Netflix, Hulu and Amazon, those voices are given more of a platform. The opportunity is all around us and it’s up to us to create and showcase why we should be the ones to close the market gaps and bring this industry to new levels of prosperity and growth.

I feel as though there will be a continued move toward more complex character and plot storytelling. Audiences have shown that when they truly engage with the story, the success of the show can skyrocket. Again, Hulu, Amazon, and Netflix have done so and it will be interesting to see whether studios decide to do the same on a more regular basis, which Marvel and Disney seem to do incredibly well.