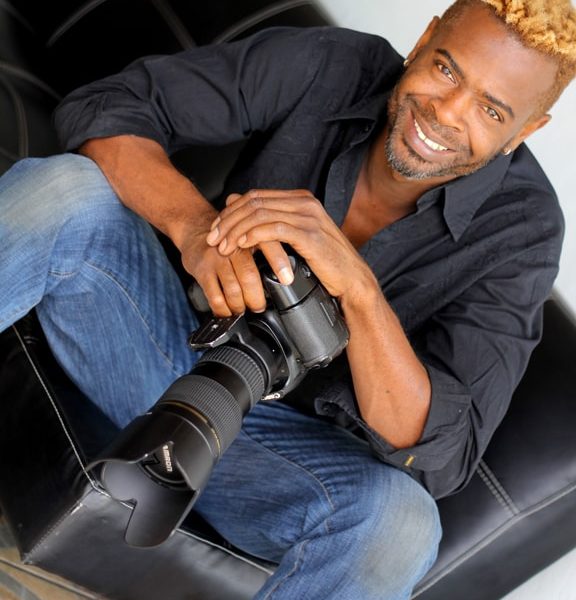 Today we’d like to introduce you to Airic Lewis.

Even before a single image or video is taken, you know that Airic Lewis From Nirvana Studios Hollywood is not your average photographer/ Director of Photography. There is something in his approachable demeanor yet unassuming confidence; something in his ability to easily connect and convey an image of truth that gives you a clue: this is where art meets science and professionalism truly blends. This is the personification of photography and videos which reflect modern times.

While borne of Midwestern roots in Omaha, NE, Eric’s images and videos reflect his colorful and diverse background that embodies a global sprit. Airic’s mother encouraged her young son not be constrained to the city limits Omaha, NE. Airic began taking pictures while trying to build his modeling portfolio in Atlanta, GA in the early 90’s. Unsatisfied by the impersonal approach and direction his photographers provided, Airic believed he could do a better job. What began as a hobby, soon morphed into passion and love for the art of photography. Photography provided the opportunity to show people the world through his eyes. Airic refined his skills at the Atlanta College of Art and began a freelancing career working with diverse clientele in Atlanta, Los Angeles, Chicago, Miami, and New York.

Airic understands every aspect of the process which enables him to service his clients’ specific needs. To this end, he has also developed refined skills in make-up artistry and wardrobe styling, He often wears the hat of a photographer, make-up artist and stylist on many of his photoshoots.

With over 22 years experience as a professional freelance photographer/ videographer, Airic has acquired expertise in editorial, commercial, fashion, beauty, headshots, and children photography and in video as well

As a credit to him his reach of experience in the industry, Airic was one of 12 finalists chosen to star in the WE television show, Style Me hosted by Rachel Hunter in 2009 and “The Shot by Tyra Banks aired on VH-1 in 2010 Most recently Airic Shot, edited and directed his latest 2016 “The Godfather in Law” , Catwalk of Hollywood “Nowhere To Hide” “Hollywood Homicide” & The Last Job and coming 2016 Family Biz..

Airic serves as the head Costume and Art Director, Makeup Artist for several upcoming short films like Nowhere to Hide ,The Last Job, Hollywood Nights,Catwalk of Hollywood, LA Proper and Net Profits. and also launched a new online magazine on 4-16-14 called “The Hollywood Elevator Magazine” In March of 2014, Airic’s photography was auctioned at the Temple Beth Hillel Day School Wine Experience to support the fight against autism.

What sets Airic apart from other photographers and DP’s is his ability to communicate and cultivate a sense of trust with clientele. Airic of Nirvana Studios Hollywood currently resides in Hollywood, brightCa and continues to attract a broad range of projects that allow him to hone is craft. The future continues to brightly for this gifted photographer and Director of Photography – radiating right through his lense!

Has it been a smooth road?
The road is never smooth, every client I have is different and my goal is to connect with them to make them feel comfortable in their inner sprit while they are in front of the camera,

I love what I do, no matter what part from doing makeup to styling to just making sure everything is ok, My job is to be their best friend or there Dr. Phil to get the best results while there in Nirvana Studios Hollywood.

I love what challenges the future holds make me stronger as person and cant wait to take them on.

Tell us about your childhood, what were you like growing up?
As a Kid growing up in Omaha I guess had many friends from all backgrounds, I always was the one person who always brought everybody together for all events.

My mom thought i was going to be a chef because I started off cooking as the 1st child and 1st grand baby, So I grew up in the kitchen with my mother and her sisters who always cooked on the weekends, So I started off with my Easy Bake Oven when i was 4 years old baking cookies and cakes.

When I became older I started writing poems and and short stories and wanted a cool way for people to remember who I was, so thats when I changed the spelling of my name from Eric to Airic just because when you seen it you would remember ME by the way I spelled my name. i guess i was living in my Air Jordan days.

Is there a specific memory from when you were younger that you really miss?
I had wonderful group of friends that we called “The family” which was a eclectic group of people from all over the city where we all used to goto a teen night club called The Edge Of Town and i’m also i’m still in contact with over 30 years later. but Back in the day we used to think we ruled Omaha (in my mind) but we loved going to teen dance clubs and I also started throwing house parties that we called RENT parties @ age 19

So, what should we be on the lookout for, what’s next in store for you?
I feel my future is a open book for me to write.. and i want to shoot my 1st feature film this year along with getting bigger and better clients who will push me to the limits of my creative mind.
And I look forward to teaching my son you can reach your dreams no matter what comes between them.
My plans are to goto the stars because my future is unlimited..