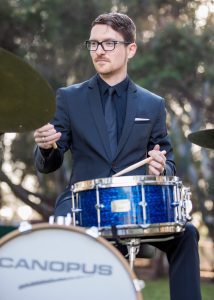 Today we’d like to introduce you to Kevin van den Elzen.

Alright, so thank you so much for sharing your story and insight with our readers. To kick things off, can you tell us a bit about how you got started?
I started playing the drums when I was three years old. My dad was a drummer and had a drum set on our attic. He inherited it from his uncle. I started taking lessons when I was 5. My teacher showed me the big band of Buddy Rich and my dad came home once with a few Frank Sinatra records. That was it for me. I was hooked on big bands and jazz music. This was when I was about eight years old.

Around that time, I started to play in the local orchestra and slowly started to play in the jazz ensembles of the music school. I started in the preparation year of the Conservatory of Amsterdam when I was 17. My playing was good enough to get accepted into the school, but my ears were not really good. I didn’t know much about triads or chords, so my teachers decided to put me in the preparation year. After that, I transferred to do my undergrad. I graduated in 2014.

During my studies in Amsterdam, I got to know drummer Jeff Hamilton and bassist John Clayton, who have been heroes of mine since I was 13. They toured in 2014 with their Clayton Hamilton Jazz Orchestra in Holland (my home country) and I was able to meet up with them. Jeff gave me the experience of a lifetime to let me play with the orchestra at their soundcheck in Amsterdam. I knew immediately that I wanted to go to LA and study with Jeff. Peter Erskine is a hero of mine too and has been teaching at the Thornton School of Music at the University of Southern California. I applied there, got accepted and moved to LA in 2015. I graduated in 2017 and stuck around ever since.

I have had the opportunity to play with some of the most amazing musicians in the world both in the US and Europe. I am immensely grateful for those experiences and opportunities.

Would you say it’s been a smooth road, and if not what are some of the biggest challenges you’ve faced along the way?
The life of a musician is sometimes not easy. I started working after graduation in the Netherlands pretty smoothly back in 2014. I was playing a bunch in Germany and Belgium too. I started my own professional big band in the Netherlands and we played one or two gigs a month in the first six months after graduating. It was a lot of work but so satisfying when we did the gigs. I played with other big bands, played in small groups. I had a nice apartment with nice roommates in Amsterdam, so life was good! I basically started from scratch when I moved to LA and I had to adjust to a different culture and language. That was pretty hard. It’s pretty common in the Netherlands to be brutally honest and direct. I felt that I had to be more subtle here. I was pretty fluent in English already, but now it’s like a second language to me. I’m still learning new things every week though!

After graduating from USC in 2015, I was traveling back and forth to the Netherlands because of gigs and tours. People started to think that I moved back home, so work was slow for a little while. That made life sometimes a little rough.

I think that every musician goes through a phase of doubt. Doubting about your musical capabilities, doubting if you made the right decisions, doubts about being able to pay rent! I went through a phase like that which was hard, but I pushed through. I started working steadily after going to jams and hangs in town.

Even though that the journey was rough at times, I still think that moving to LA was one of the best decisions I’ve ever made.

Can you tell our readers more about what you do and what you think sets you apart from others?
I play drums with all kinds of jazz artists in town such as Josh Nelson, Nick Mancini, Bob Sheppard and Will Brahm. I also play often with my good friends guitarist Shane Savala, saxophonist Jason Fabus and pianist Adam Hersh. I play jazz in its broadest definition. From swing music from the 30’s and 40’s to contemporary jazz. I try to play with as many different bands as I can. Trio’s, quartets, big bands, with or without vocals. My passion lies with big bands and I’m striving to play with as many different big bands as I can. Modern, traditional and everything in between. I’ve had the opportunity to play with the Bill Holman Big Band, Clare Fischer Big Band, Monkestra, Brussels Jazz Orchestra, Paradox Jazz Orchestra (Holland), Jazz Symposium Jazz Orchestra, and the bands of my good friends Danny Jonokuchi, Kim Richmond, Dave Richards and Teryn Re. I recently started playing with the big band of Kyle Myers. They’re all really different stylistically, so it’s a challenge to adept to the needs of those bands. That’s what makes it so fun!

Just a few months ago, one of my biggest dreams when I moved to town came true. I played with the Quincy Jones All Star Big Band conducted by John Clayton as a part of a tribute to Quincy Jones at LACMA. To be working in a big band led by John Clayton was one of my goals when I moved to town. I never thought it would happen right when things started to go back to semi-normal.

My own two current projects are the West Coast Jazz Hour and the VDE Big Band. The West Coast Jazz Hour is an online Facebook show which I host together with my very good friend, pianist Josh Nelson. We started in May 2020, a few months after the start of the pandemic. We interview musicians who were a part of the West Coast jazz scene of the 50’s and the 60’s or musicians who are affiliated with that era. We interviewed Terry Gibbs, Bill Holman, John Clayton, Sue Raney, Jeff Hamilton, Roy McCurdy, Wayne Bergeron, Dick Nash and many more. We’ve also done tribute shows to Henry Mancini, Frank Capp, Andre Previn and two episodes about Gerald Wilson with his son, guitarist Anthony Wilson.

We showcase this music also in live performances. Thus far, we played two quintet performances at Campus Jax in Newport and at Vitello’s in Studio City. We also did a big band show at Vibrato’s in Bel Air. We have two shows coming up in January and February of 2022. This project has been truly amazing to do because I’ve discovered so much incredible music. I also spoke with legendary musicians who I would’ve never thought that I would meet or speak with.

My own big band, the VDE Big Band, had its first performance at the Mint in September after the start of the pandemic. The last gig pre covid gig was at the Blue Whale, which sadly closed during the pandemic. We did a tribute to the music of the Thad Jones Mel Lewis Jazz Orchestra with John Clayton, Bob Mintzer and John Beasley as guests. I’ll never forget that night. The band was on fire and it was such a pleasure to play that music for a very enthusiastic audience. I want to play with the band as much as I can now that the band is up and running again. The last hit at the Mint was so much fun!

I’m currently on tour with a Frank Sinatra tribute show with my Dutch Concert Big Band. The touring schedule has been changed due to stricter covid mandates in the Netherlands, but it has been nothing but awesome to play with my old friends again. It has been almost 2 years since I’ve been home due to the pandemic.

Besides all those things, I freelance around town with as many different musicians as I can.

How can people work with you, collaborate with you or support you?
I like to work with people whose music hits me in my soul. That sounds corny, but it’s true haha! Besides the music, I should also connect on a personal level with the artist.

The best examples of a great collaboration are my relationships with Josh Nelson and Nick Mancini. Nick was a very big supporter in my early stages of coming onto the LA jazz scene. His music is always inspiring and challenges me to get out of my comfort zone. We have played a lot together and I can hear where we want to go musically when we’re playing standards or his originals. Our common ground is very easily accessible on a musical and personal level. We had a connection almost immediately on the first time we’ve met!

I knew Josh already for a few years, but we really connected at the beginning of the pandemic when we started the West Coast Jazz Hour. Now we’re sort of like brothers. We see eye to eye musically and personally on a lot of things.

The two most important things for me to work with an artist or fellow musician is having common ground both musically and personally. 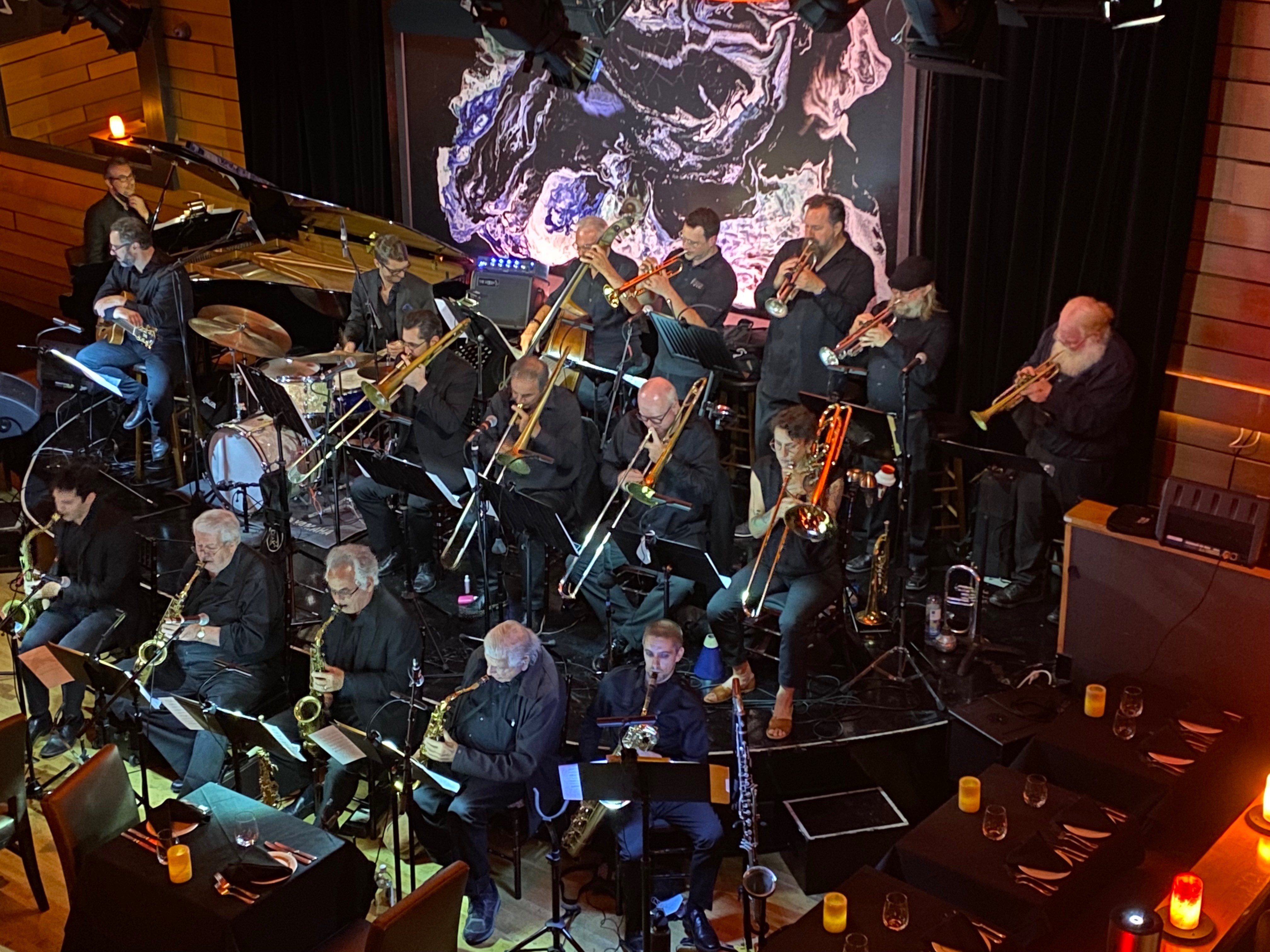 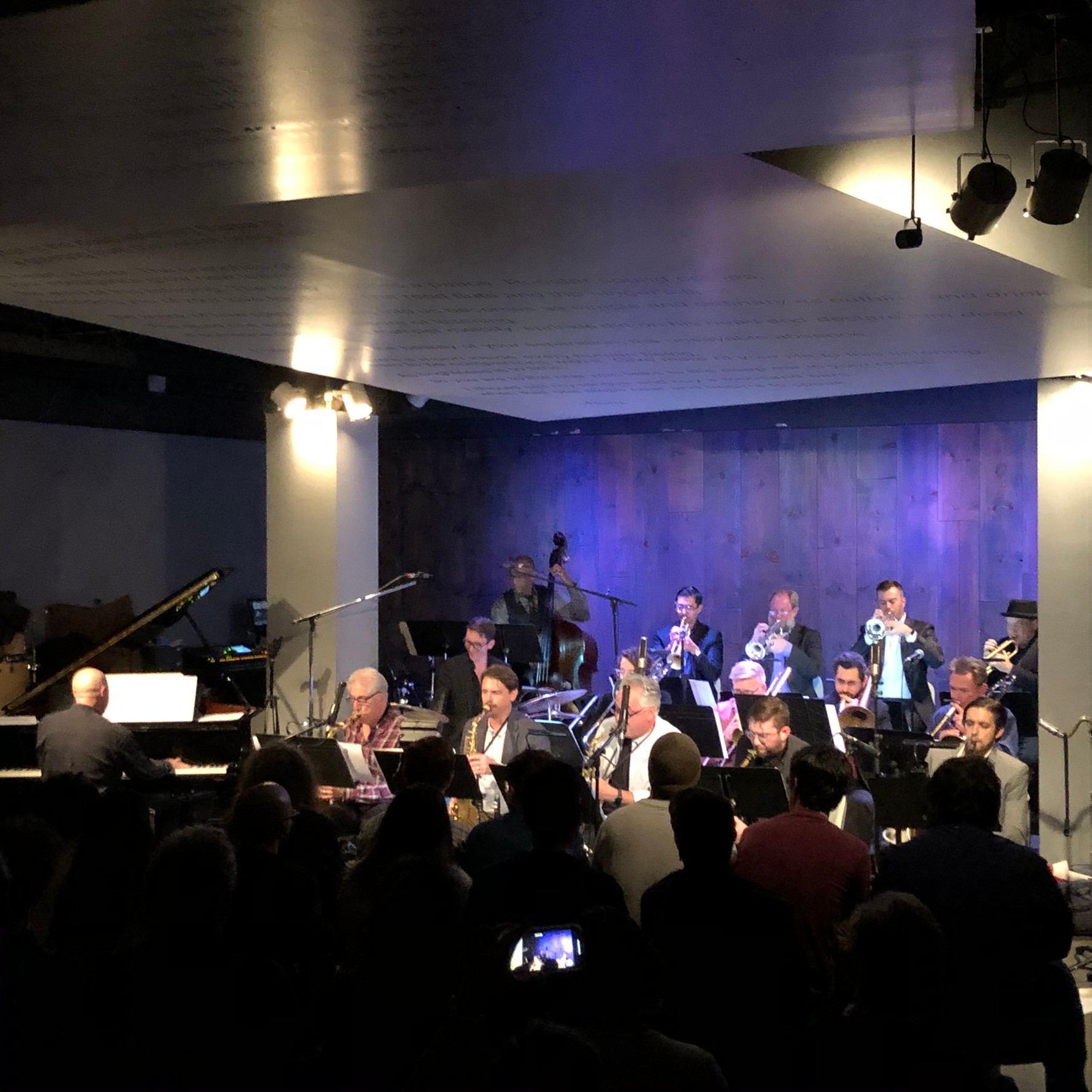 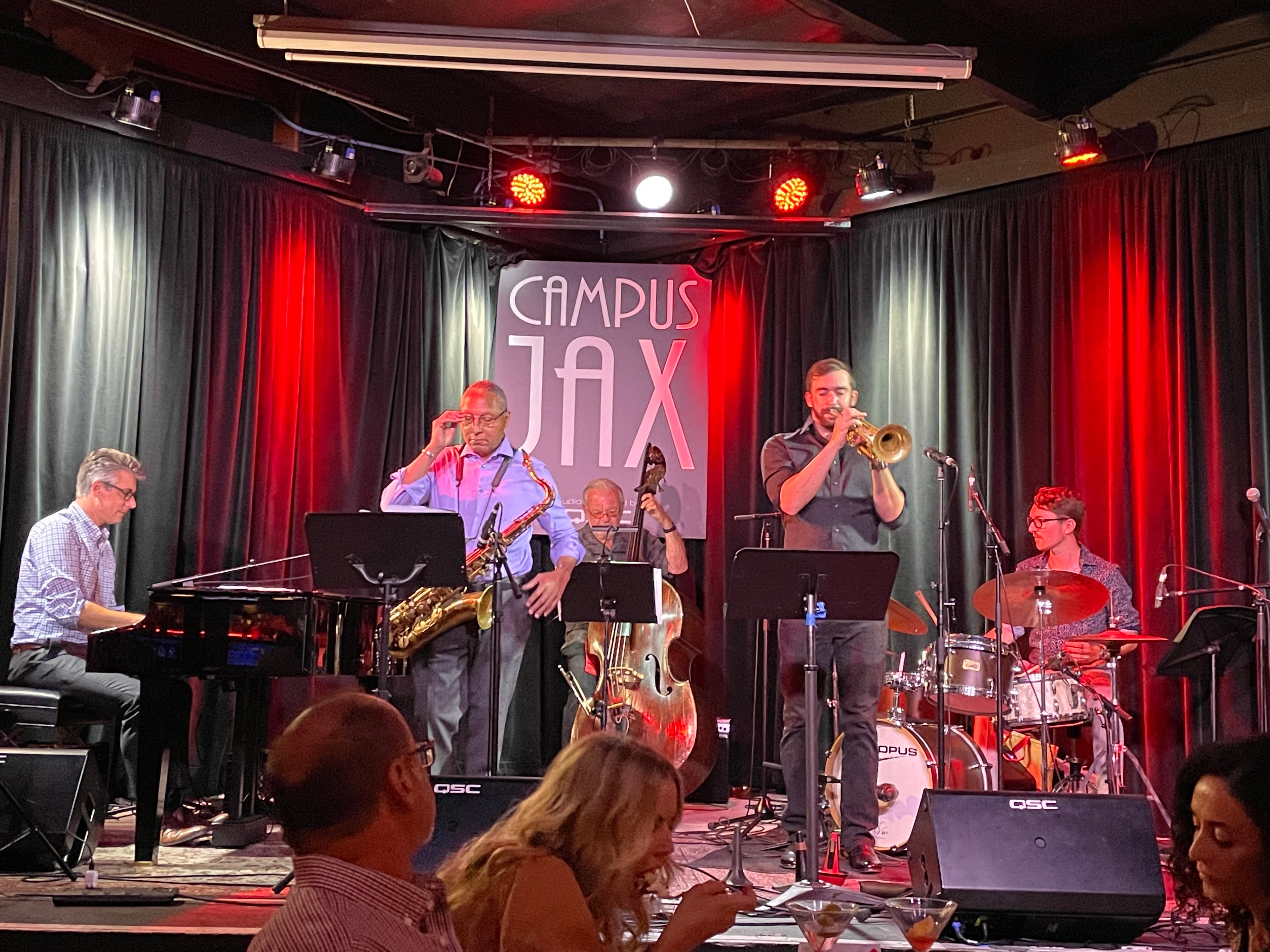 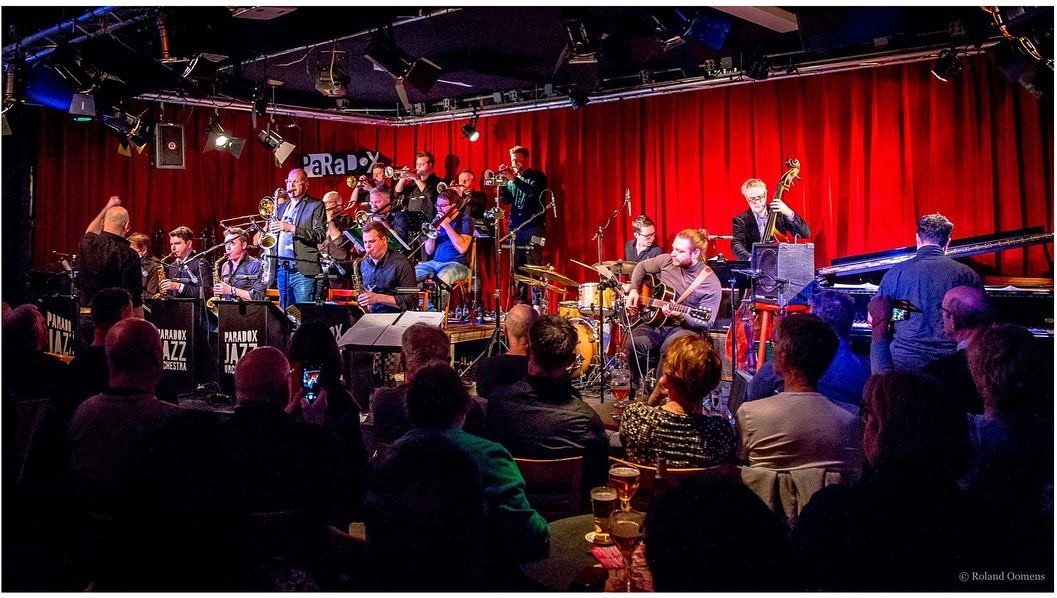