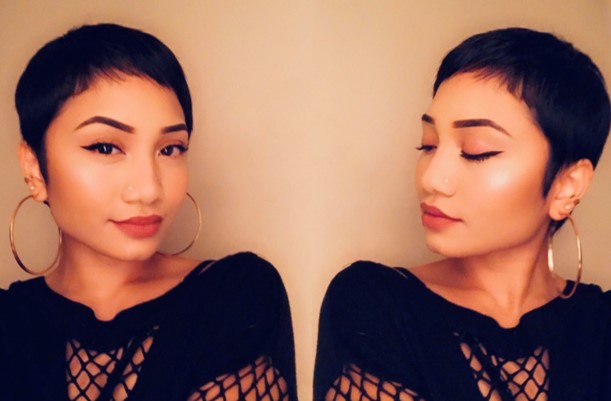 Today we’d like to introduce you to Kait Martinez.

So, before we jump into specific questions, why don’t you give us some details about you and your story.
So, I basically crawled out of my mom’s womb wanting to create. For as long as I’ve been alive, I’ve always found myself gravitating towards creative activities or just anything hands on. Whether it was a craft kit from Michael’s, a coloring book, or trying to make a tree swing out of rope and cardboard in my childhood home (Sidenote: The swing was a fail).

Although, as I grew older, I assumed I would pursue a career in the medical field because that was what was expected of me. It was either be a nurse or a doctor. I don’t know how that would’ve work, considering I faint easily when I see blood lol. Fast forward to sitting at my English and Math assessment test in community college. On the computer in front of me, they listed all the majors they offered and I had to choose which one I wanted to pursue. I couldn’t get myself to choose a medical major because that wasn’t where my heart was. So I asked myself if I wanted to be truly happy? I chose art.

I ending up receiving two Associate degrees in Fine Art from Cypress College, then went on to get my Bachelors of Fine Art with an Emphasis in Illustration from Cal State Long Beach. The rest is basically history. For the past years, I’ve been on a massive journey of pursuing who I am and how I can convey that through my art. It’s been a very interesting journey, but I wouldn’t trade it for the world.

Great, so let’s dig a little deeper into the story – has it been an easy path overall and if not, what were the challenges you’ve had to overcome?
I’ve definitely faced some interesting challenges and I still am to this day. There were times when I was in college and wished I was burying my face in a book instead of working on a painting at 3 am. Is it kinda weird that I actually miss those nights?

I think my biggest and constant struggle is figuring out where I’m heading. I’m honestly afraid of the future and where I will end up. Say “I” if ya feel me, but I’ve been learning and experiencing so many different things the past years that I’m just learning to ride the wave. Where I expect myself to be changes a lot and it’ll probably still change as I find who I am. I used to have a huge dream of working for Pixar, but I learned later that animation wasn’t for me; even though having my name super small in the credits would be amazing. I almost became a ceramist because of a cool sculpting class I took in college. There was a point I even tried to switch to fashion design and even go to cosmetology school. Lol. What a winding road it has been.

For a short amount of time, I even apprenticed in LA to become a black and grey tattoo artist. I thought it would be so dope to have a bunch of people as my canvasses and having them walk around the world with my art on their body. I had a lot on my plate at the time, so I had to choose between school and my apprenticeship. I chose school, and I just took it that tattooing wasn’t for me.

In 2017, I was dedicated to embroidering t-shirts. At the time, I thought “This was it.” I thought this was where I was going to take off, but something else wanted to take over my life (Spoiler up ahead). My friends and family were supporting me, I was having so much fun doing it, and I had wholesale accounts with brands and a store. My shirts were being sold at the store New Profanity on Melrose Avenue which led to Emma Kenney from Shameless and The Conners to purchase one of my shirts. That was major for me because I was literally watching Shameless when the owner contacted me telling me that Emma was wearing it on her InstaStory. I had a permanent smile on my face for the next week. I thought it was gonna be stuck like that forever.

Around the same time, I was embroidering shirts, I started painting graduation caps. I painted one of my friend’s caps in 2015 then two years later his friend reached out to me asking if I could paint hers. I later posted on Facebook jokingly saying if anyone needed their graduation caps painted that I got them. I ended up painting eight caps that year. The next year I painted 73. This year I’ve painted 36 and counting, and it kind of just became my thing.

We’d love to hear more about your work and what you are currently focused on. What else should we know?
I am a freelance artist that specializes in portraiture and hand painted graduation cap toppers. If someone told me I’d be painting as much as I do now, I’d say they were lying and laugh. I always pictured myself working solely in black and white and specializing in graphite and charcoal.

I have my college professor to blame for my now current love for painting. I used to hate painting. I just never felt I could grasp color correctly. I took an illustration class when I was at Cal State Long Beach where my professor had us use this paint called gouache (goo-wash). It’s kinda a mix between watercolor and acrylic paint, and it has become my all-time favorite medium to work in. I use gouache to paint all of my graduation cap toppers. Actually, I still use the same paint I purchased in college for my caps… which was almost like 4-5 years ago! Wow, time flies, but this paint last forever! A little goes a very very long way.

I want to say what I’m most proud of is all the graduation caps I’ve painted. I really never thought I would be doing this as an artist, but I’m extremely glad that I am. The amount of work I’ve produced is beyond what I ever thought I would be doing. It has helped me find what I like to paint and better my skills. What makes me the most proud and happy is that I get to create something meaningful for someone for their special day. I feel like what I make for them is kinda like the cherry on top of a beautiful sundae. It has also connected me with so many different people around the country, from here in Long Beach all the way to New York and Florida.

I think just hand painting graduation cap toppers in general sets me apart from others. It’s a very small community, but it has been a huge stepping stone in getting my artwork out there.

What moment in your career do you look back most fondly on?
My proudest moment as of right now is that I’m really starting to settle into what I like to do as an artist. For most of my art career, I solely produced work for other people whether it was commissioned or a school project. I barely made work for myself! I would say the most I’ve done is a handful of portrait sketches. I’ve only recently realized how important it is to make time for myself. I’m currently working on my first personal painting, which I can’t wait to share with the world when it’s complete. So stay tuned! 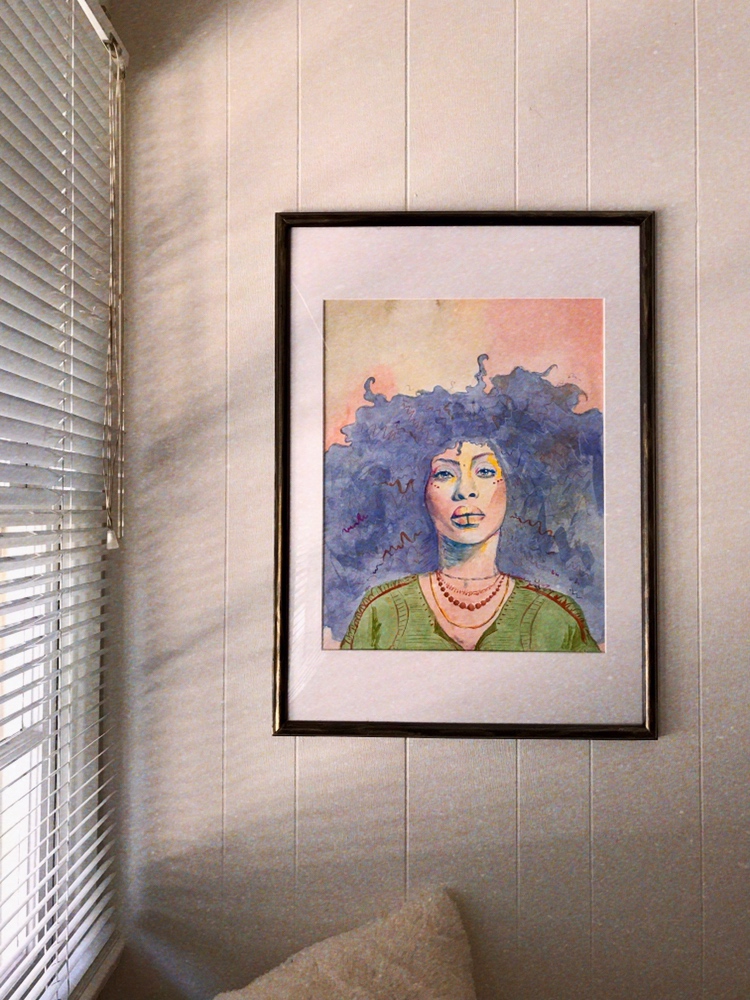 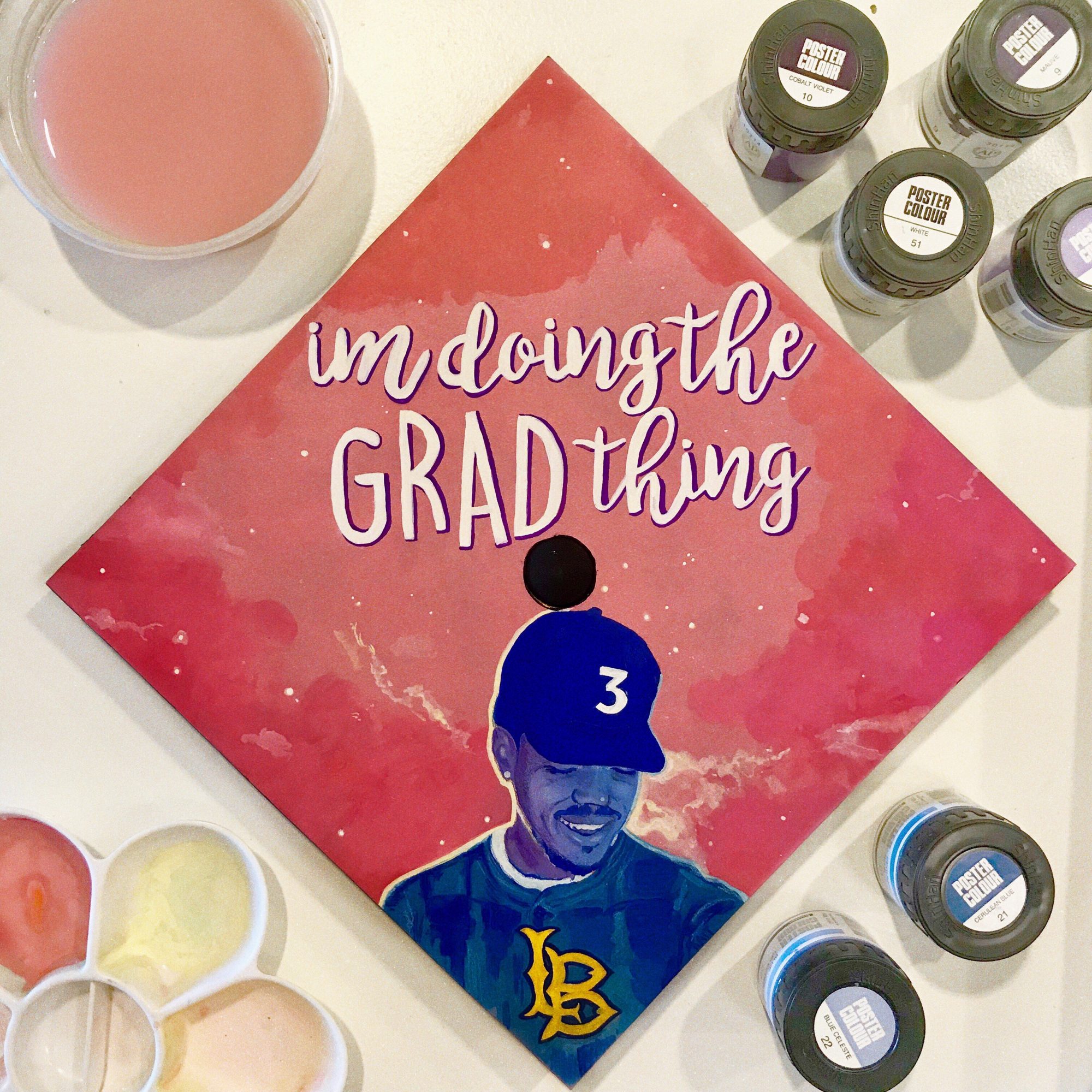 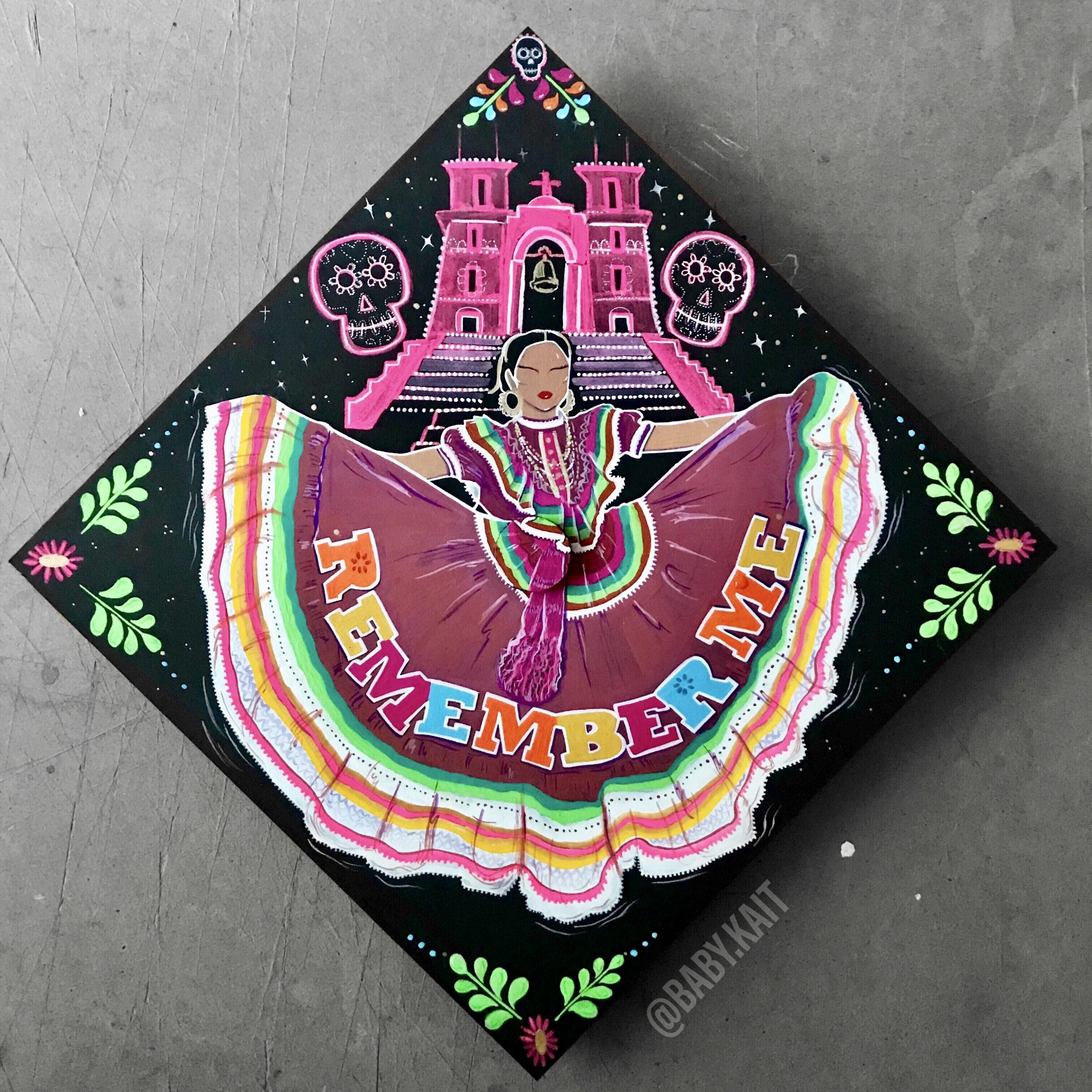 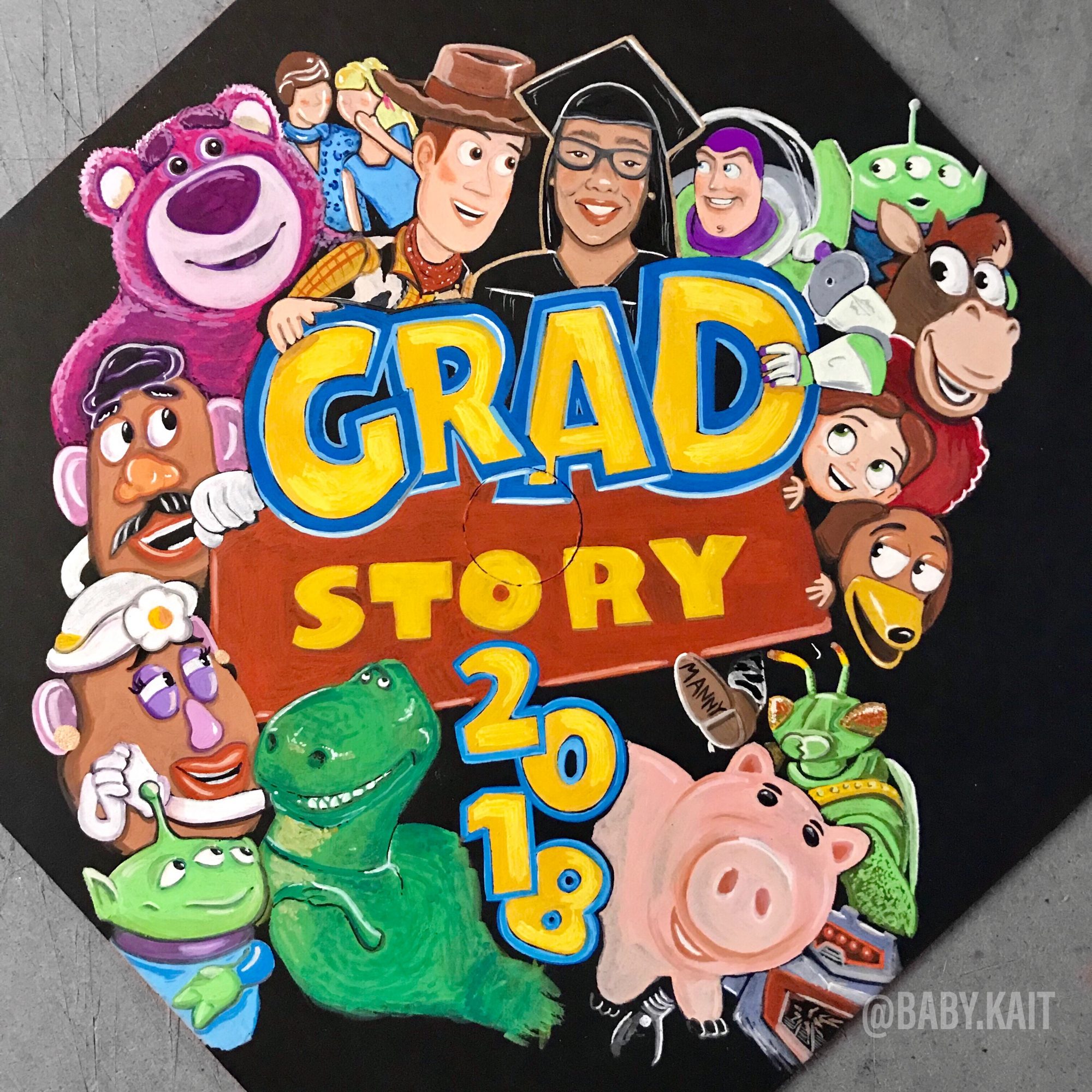 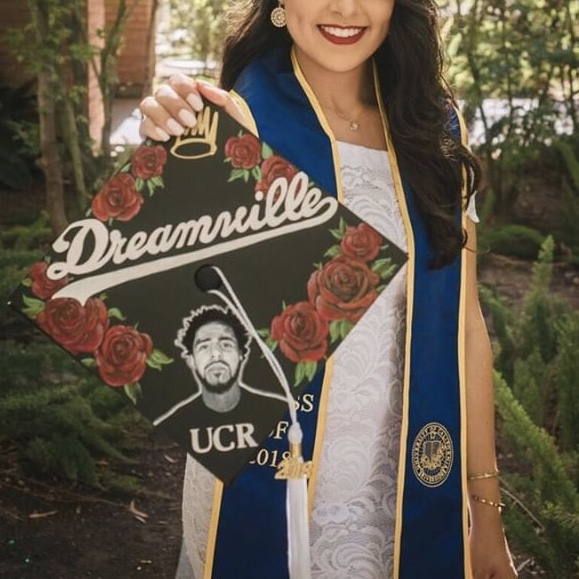 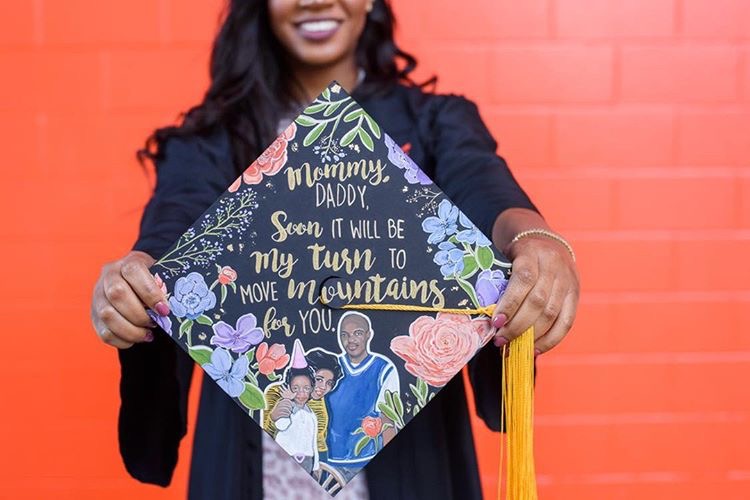 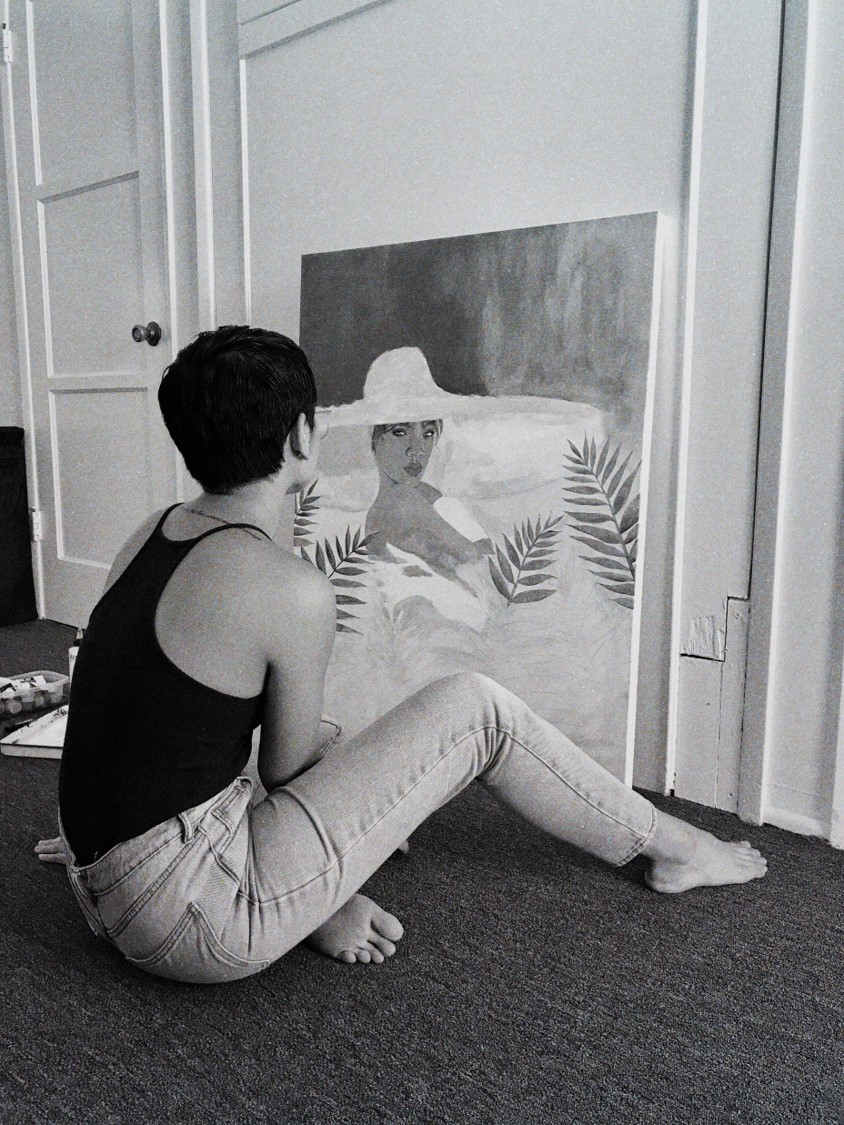 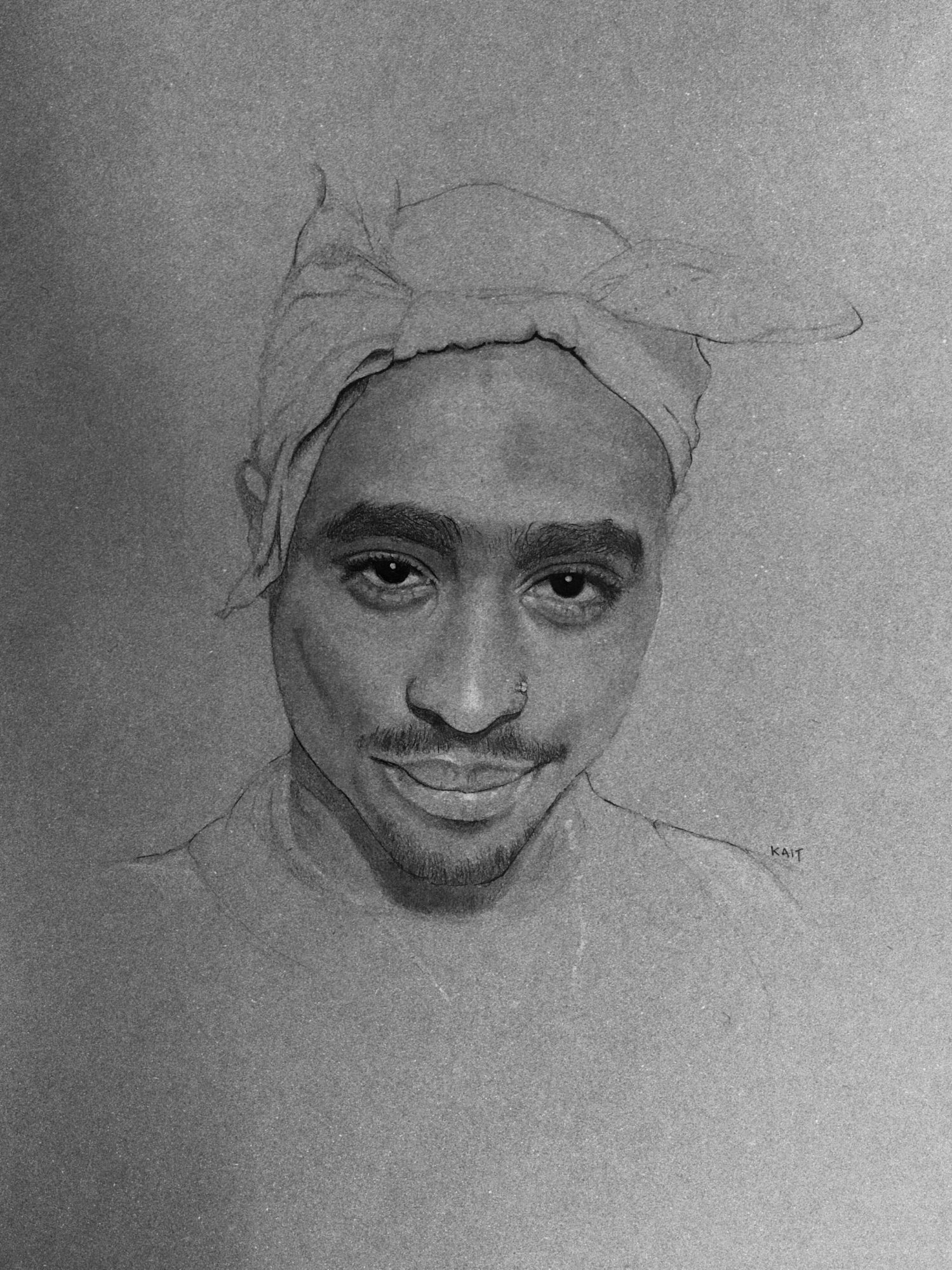