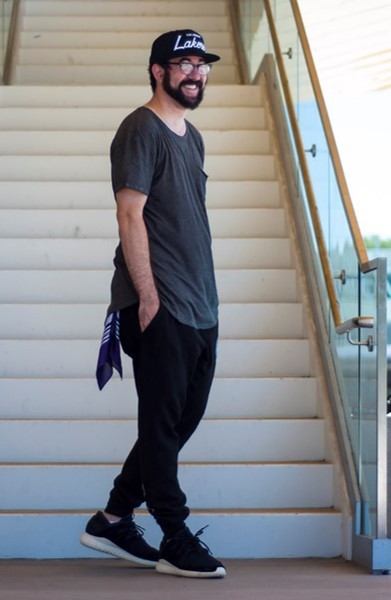 Today we’d like to introduce you to Christopher Hawley .

Christopher, please share your story with us. How did you get to where you are today?
How I got started is a long convoluted story best told over your favorite alcoholic beverage and preferably after you’ve had a few.

I started drawing at a young age and was always into illustrating well into my high school years. After that, i dabbled in college and found out to my knowledge that people can’t teach you how YOU need to be creative. It was a concept that I guess had always been stated in cliches but never realized by me until I was about 18 or so. So after that I tried finding my own way in art and what I loved. Then I took a class in drawing and the teacher told me the best way to get great at life drawing is to take photos. Mind you I had taken many photos before with a small Canon Powershot that I got from the Toy R Us I was working at the time but I never even heard of the words SLR until that point.

So I sold as much stuff as I could and bought my first DSLR a Nikon D60. At the time it was not fancy…and it’s still not fancy now. However, it blew my mind. In drawing you already learn about light and how you need to have light hit objects in a different way and get certain shading and gradients. I just never realize that I could have a machine that would do all that work for me. So any expansion of the idea would be easier to do from that point because the base of the image is out of the way.

From there I shot everything I could. I did the wedding scene. I did headshots. I did business portraits. I did this thing with just dogs for a while. I shot for a couple of independently wealthy guys that wanted to do magazines. Just everything. Then one day it hit me. I had been taking pictures for so long I forgot about my art. So I start crossing the two mediums at first making images then printings them and painting on top of them. Then doing it all on my tablet of computer and from there it took off. My stint as a photographer bled into other mediums like videography and video editing and post editing. It always comes back to me shooting and creating my own images or putting my own stamp on something.

I love what I do very much and I worked hard but also I just surrounded myself around the craft and submerged myself in the ideas I have. It was actually a pretty great time in my life haha.

Has it been a smooth road?
haha. It has definitely NOT been a smooth road. When I had this glorious dream of becoming a photographer I was working at Best Buy full-time and I was at the crossroads everyone is at in their lives where they look at the walls that surround them and ask themselves “Is this it? Is this what I’m capable of?” In that moment I was watching clips of Inside the Actors Studio and it was an episode with Conan O’Brien. This girl stands up and asks him “When is the best time to pursue your dream of writing/directing/acting” and he replied:

The best time to pursue something you want to do is when you just bought a new car, just signed a lease on a new house, or are just about to have a child. At that point, you have no choice but to succeed.

The next day I quit my job.

I was so inspired and believed in myself so hard. Then within a month my money ran out. In order to pay for my car, I had to sell my guitar, my television, my PlayStation. Basically, anything of value had to go just to stay afloat. Two months went by and I realized I hadn’t built up any clients or jobs the only people I shot with was friends and family but I couldn’t keep being poor. So I got a job at Petco and was working overnight and I loathed it. I would work overnight then sleep for about four hours get up and shoot before work then go back in to work. I worked there for three months and then I left. That was the last non-creative job I had.

That was about 6 years ago.

There will always be challenges. I have people offer me amazing jobs and never heard from them again. I’ve had people have me do work for them and not pay me. I’ve had people give me a deposit and not the other half. I’ve been on jobs for weeks only to get fired. It’s all about bobbing and weaving.

the punches are going to land no matter what. Sometimes they graze your chin and sometimes they hit you hard. You get up though every time. Then you bob and weave.

So, what’s next? Any big plans?
Future plans are always difficult for me to predict. The way I work has always been going with the flow. To use the fighting analogy again. Fighters take every fight they can. Obviously focusing on winning, however understanding that sometimes you have to take the fights you don’t want to so you can get to the fight you do want. Meaning the when I started I shifted drastically from what I originally got into it for. I really like portrait photography and while I still enjoy it very much I have pivoted and found a large love for product photography as well. Of course combining the two is now a big niche for me. So I’ll still take almost all work that is handed to me now but I like to keep it in my skill set. I don’t do wedding photography anymore but I did at one point. Always have to try new things to see where your heart really tells you that you belong. However, I will say I have always dreamed of working for Adidas. So going forward everything I do is to strengthen my skill set, portfolio, workflow, and turn around so I’ll be prepared when I’m ready to present myself to them.

As far as big changes I have made a slight pivot to distance myself a bit from the business side and have partnered up with a savvy business-minded friend of mine to start a new media company that will produce media for all sorts of companies. While the details aren’t completely finalized yet everything is in motion to start porting over to this new media company. I want to provide smaller business and start ups with an easy way to get a website a logo and product photos all in one place. Our company can do that and for way, less than a lot of these other guys are asking for in Los Angeles now. I mean basic logo design can run you like $1200!!! With us, we want to undercut and really show people they can do what they want a lot faster and cost effective.

Let’s go backward a bit – can you tell us about the most trying time in your career?
Once you have made a decision to be creative and wanting your life to be surrounded by creativity and be defined by the content you put out you are putting yourself at the mercy of the world. The world has no mercy for people that want to be artistic. It’s the truth. There is no “hardest point” in my career because it was all an uphill battle. I have had jobs that seemed like a dream come true that I got let go from that there wasn’t enough money and I had no idea how I was going to eat. I had to sell everything except my art supplies to make car payments. I had to take jobs for $50 that require 8 hrs of work to buy food and gas. It is hard. Saying that being artistic as a career isn’t difficult is like saying “Getting a tattoo doesn’t hurt” It hurts but the trick is not to care. If this is what you want to do. Honestly, 100% then don’t ever let anyone tell you that you can’t. In a lot of ways that’s the hardest part because most of the time the person that is telling you that you cannot do it-is you.

That being said, If you accept the hardships I will say this. There is nothing like it. being able to do even a fraction of what you love to do. Man when I got that $50 for 8/hrs of work I thought to myself that it felt SO GOOD. I did that. My hands front to back made that happen. That feeling for someone trusting you and believing in an image or an idea that your unique brain came up with and then they pay you for it? It’s remarkable. There is a blinding light at the end of the tunnel and it gets hard but the only way to get past it is remembered, this is where you belong. This is why you exist. No-one can think of the ideas you can. Sure I can take your idea and splice it and edit and make it my own. However, if you didn’t exist the idea would have never gone into the world. That’s something that will never change. So always remember that.

Do you ever feel like “Wow, I’ve arrived” or “I’ve made it” or do you feel like the bulk of the story is still unwritten?
I think my wow moment was when I realized “Hey I think I can actually do this” For me, I started drawing before I learned how to write and never stopped deep into high school. Then I got into video editing in High School. After that, I got into Camera work and photoshop. Then I realize every single thing I know how to do can be combined. I can draw on my own photos paint on them even. The possibilities were endless. Just from an art standpoint, that’s where I stood. Working a normal job and creating my own art. I started doing Social Media for a retailer and he mentioned he needed head shots a newsletter and some logo design and if I knew anyone. I said I could do it all and I did. It was at that moment I realized everything I got in trouble for doing at school when I should have been learning about history or math people in the real world need. I then got hired to work as a sales associate in a vape shop that had a serious social media presence of one guy. So I told them that I can help him, at that moment I was making like $12 an hour (I know) to take photos edit videos and design stuff all day. Which you have to keep in mind for someone who wants to have a creative career was a dream! I mean I made less at Best Buy doing a bunch of stuff I hated. At that moment I realized there was a place for someone like me. A jack of all trades but a master of none. It was amazing. From that point on I climbed and climbed. It made me realize whatever you do especially in this information age there is a place, a niche, a genre, specifically tailored to you. You just gotta find it.