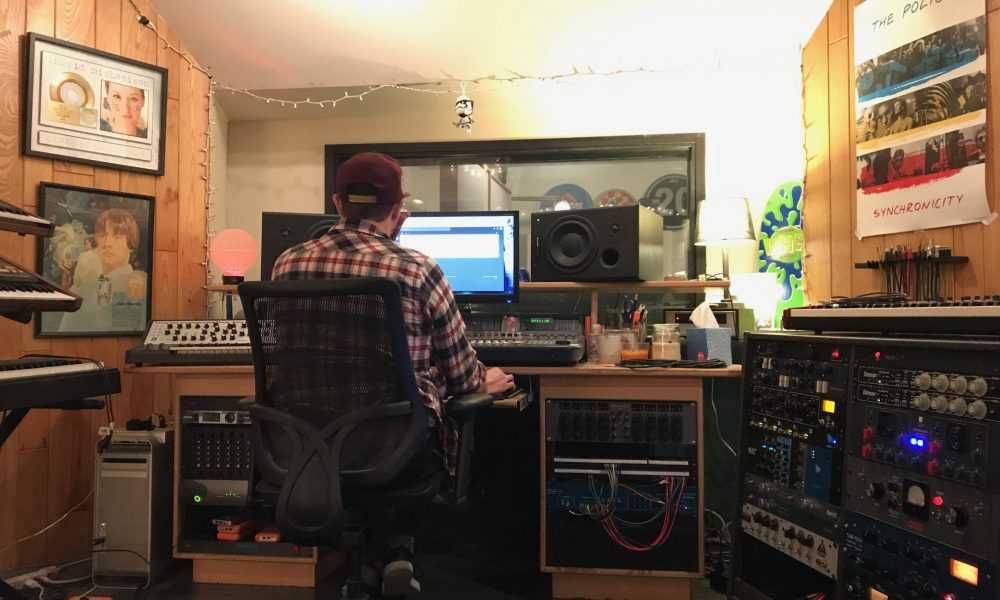 Today we’d like to introduce you to John Clinebell.

John, please share your story with us. How did you get to where you are today?
I’m an independent producer/songwriter who works at Death Star Studios in Koreatown, Los Angeles. I moved to L.A. from Arizona in 2005. Originally I moved here to pursue a singer/songwriter career, recorded albums, was on the roster of a start-up record label, played shows all over town, busked the Santa Monica promenade for a few summers. In 2013 I decided to pivot to producing music. I quit my day job, went to India on a spiritual trek and returned home with a vision for where I wanted to go with my music career. I started learning how to produce and it all felt like a crash course in 20 different directions. I was doing everything from hiring producers to come to my studio to teach me some tricks in Pro Tools to courses like Westlake’s Cre8 Academy and Cathy Heller’s (Catch The Moon Music) workshops on music licensing. I was doing all this while making ends meet doing odd jobs and living off savings.

It took a couple of years, but things started coming together for me. I should also mention I was producing just about anyone who wanted to work with me at that time… I probably learned the most just by doing. Working on tracks with little or no budget. Failing a lot but also succeeding in places and trying my best to enjoy the struggle. In 2017 some tracks that I co-wrote and sang on were placed on an international Starbucks ad and a couple of TV shows. My own productions were getting better all the time, and eventually I started getting busier and busier. Landing placements and working with more and more up and coming indie artists, many from the Hotel Cafe circuit. One of my mentors and friends Bill Lefler eventually offered to manage me, and then in late 2018 gave me the chance to move into his studio in KTown for evenings and weekends. It’s been amazing working there.

In mid-2019, I started working half time for the boutique licensing agency Catch The Moon Music as Director of Music. I have pitched music directly to supes and agencies on a regular basis since, all while teaching students of the 6 Figure Songwriting course how to get their songs onto TV shows, films and ads. I’ve had the pleasure of interviewing top music industry execs and creating custom pitches for their projects. Here I am about six years later, and I’m living the dream I had when I first moved here to make a living completely from the music industry. It isn’t the life I necessarily saw for myself when I first moved here, but my jack-of-all-trades type skillset is perfect for being a producer. And I have never been more active writing and singing in the studio than I am now… I’m constantly putting my creative talents to work on fun projects with talented hard-working folks I really admire and just enjoy being friends with. So that’s the short version of my “moving to Los Angeles with big dreams and finding a way” success story.

Overall, has it been relatively smooth? If not, what were some of the struggles along the way?
I’m not sure anyone gets afforded a smooth ride in the music industry. For me, some of the biggest hurdles were letting others more talented than me round out my skill set, and getting some honesty and clarity around some of the blind spots I had in my songwriting. There were truly some facepalm type moments for me, like realizing something about songwriting that I would have probably learned 20 years earlier had I had some formal music training. And a couple of times, I started working on a project that was doomed from the start and had to give up on them eventually. It wasn’t for lack of effort. There are also a couple of large projects. I’m glad I had the tenacity to finish even when the stakeholders and I were not always getting along and the project was taking way too long. One of the things I’ve really learned the importance of is project scope! Even though it wasn’t easy a lot of the time, I’m glad I almost gave up once… it makes me so glad that I didn’t even in the darkest hour of it. And for the most part, I’ve had the right attitude about the stuff that comes up. Customer is always right, take the high road, laugh at the bizarre situations that can come up, not take it too seriously, just do my best to be a man of my word and do what I say I’m going to. You know? I think that’s really made things smoother than it would be otherwise.

Death Star Studios – what should we know? What do you do best? What sets you apart from the competition?
Death Star Studios is an awesome recording studio in KTown, Los Angeles. It’s been around for about 30 years. It’s a bit of a speakeasy of a spot. Lots of great up and coming indie singer/songwriter artists, many from the Hotel Cafe circuit, enjoy recording in our comfy environment full of Star Wars themed trinkets and an endless assortment of musical toys to play around with. It’s a laid back place that just feels like home to record in. We have a killer little live room with hardwood floors, a great sounding upright piano, lots of options for drum tracking. We also have a nice iso booth to get an intimate sound with vocals. Lots of high-end mics, pres, compressors, EQs. And that’s just the hardware side of it. Dozens of guitars, ukes, banjos, etc. to choose from. And we’re walking distance from a killer and affordable sushi place.

What is “success” or “successful” for you?
Am I doing my best today? Can I look myself in the mirror at the end of the day and feel good about myself? I think those are kind of the baselines for success to me. The accolades you can’t control for the most part, so to me it’s just about showing up each day, being willing to put in the hard work, aiming your sights high, executing and then letting go of the results. Also, you gotta be able to enjoy and truly put your heart into what you’re doing. That’s another indicator of success to me. I vibe best with people who have a similar mindset.