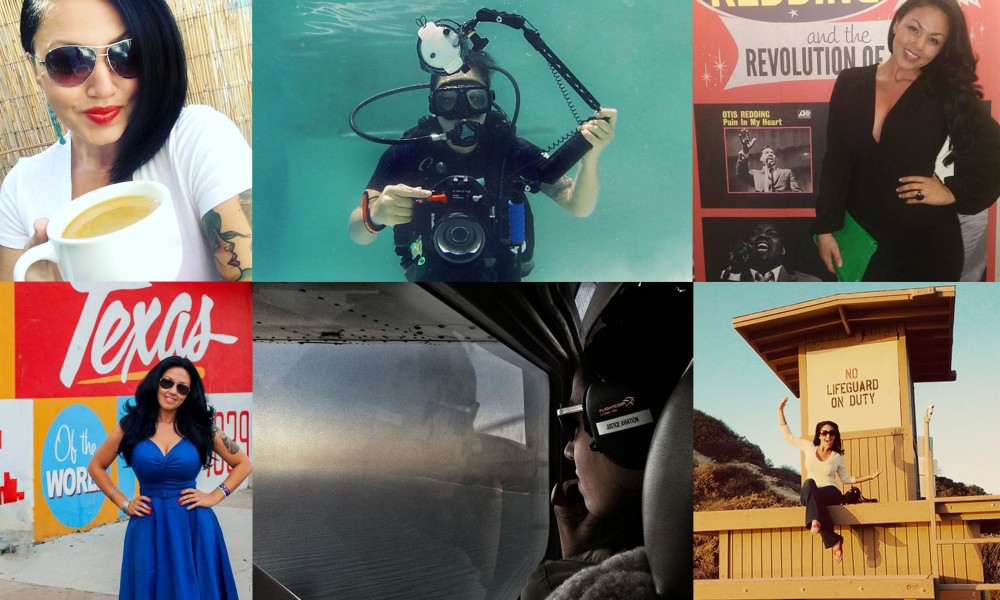 Today we’d like to introduce you to Shannon Lee.

Shannon, please share your story with us. How did you get to where you are today?
I first became smitten with imagery and photography when I was around 10 yrs. of age in the basement of my grandparents home in Poughkeepsie, NY. My grandfather had this amazing collection of National Geographic Magazines and Antique Cameras. I used to hide behind an old player piano in the basement and pretend that I was in some far off wild place shooting tigers and elephants with his camera collection. Naturally, once I was able to take a photography class, I did! That class turned into me moving to Florida to go to College where I earned a degree in Film and Photography way back before digital shooting was even an option.

After school (and a brief stint training as a stunt person, that didn’t pan out due to an injury) I bounced around from one “survival” job to another never really feeling fulfilled because they didn’t allow me to be creative. I reached a point of frustration and decided I had to dive in full force, but during my survival-mode, shooting on film had started to fall out of favor. I had to develop a new skill set. So, I transitioned to digital and started shooting anything and everything! People became my first target and then as I began traveling and backpacking more, scenery and nature became a fascination.

As a result, I began booking work both nationally and Internationally. I was shooting people, sports, products, and weddings. Not long after I had some of my environmental images recognized by NationalGeographic.com, Oprah.com and NBC’s Today.com. The more I shot, the more I began to really find the areas that I wanted to focus on. I moved out to LA about 4yrs. ago looking for a change but also wanting to be in a creative environment near the ocean. Due to spending, a large portion of my life in Florida near the ocean my interest in scuba diving and underwater photography grew. I soon discovered that I love creating and styling shoots not only on dry land but underwater as well. Right now a large part of my focus is working in the underwater environment. I really enjoy the process from storyboards to collaborating with my favorite stylist Capree Carin out of Atlanta, to sinking props and models beneath the surface. I have all of these crazy ideas for 2017 for photography in general and then I add the underwater element and the ideas then become these terrifying amazing opportunities’ that I can’t wait to explore! I am currently spending a large portion of my time working out logistics, building props and determining just what objects I can actually throw in the pool or the ocean to pull off these elaborate underwater shoots that I have in mind.

Has it been a smooth road?
Have you ever heard the saying, “A smooth sea never made a skillful sailor”? I feel very strongly that the creative world is very much like the sea and the obstacles that arise are what make us more adept. I have had gear issues, travel issues, weather issues, shoot location issues, you name it! In fact, one shoot was delayed and almost shut down by the police. I was out in the outskirts of the Mojave Desert, essentially in the middle of nowhere with a client shooting his album cover which made its debut on the Late Late Show. Part of the shoot required a prop M4 rifle. Prior to shooting, we took a walk to check out some of the potential shoot spots. The client was carrying the prop rifle. Unbeknownst to us, we were actually on a Casino’s property. They had cameras throughout the desert; their entire security personnel saw a large male, with a “gun” walking out into the middle of the desert with a much smaller girl. It made for a very interesting day and I received a very stern talking to by the police that were notified. In the end, the shoot was a success and I learned a lesson, get a permit!

In all honestly, a big part of working in a creative industry is troubleshooting; the key in my opinion when it comes to photography or designing creative shoots is to really learn and know your gear. Visit your shoot locations in advance and make sure you have permission or the permits needed for specific locations. Have a backup in the event of weather or if your subject becomes ill. There are so many things to consider and be prepared for. Then there’s shooting underwater which brings a whole new series of obstacles that I deal with every time I sink beneath the surface. Lighting is an area that I am consistently working on; everything looks and moves differently underwater. Buoyancy issues, change in lighting, change in weather etc. are all struggles – the key is to troubleshoot and move on in a timely manner. Casting for creative shoots also brings a set of challenges, sometimes everything under the sun is going right but the model isn’t as strong or comfortable, especially under the water. I work with a phenomenal gal out of Central Florida, Jamie Magnor who is a dream underwater, I mean I can throw her in hundreds of yards of heavy fabric (see image below) and put her in a pool and for hours she just handles it!

In all actuality I am thankful for the bumps in my road and in a weird way I look forward to the ones I have yet to encounter, they educate me and they continue to make me grow as an artist.

What role has luck had in your life and career?
I tend to perceive luck as fleeting. My personal experience is that luck is fairly unpredictable so I don’t really focus on it. I have good and bad days just like anyone, I am sure that I will have more of both in my future! To be honest, some of my shoot days that started out the worst have yielded some of my best work. I am sure I could have focused on such days as being “unlucky” but the reality is, especially in the creative industry few things go as planned. A few years ago I had to take some time off due to a medical reason outside of my control; it was around the time I had gotten back from a shoot in Italy. I remember my flight back to the States feeling like I was really heading in an up and forward direction and I was so eager to keep growing creatively and to keep traveling. I think I created about 12 mood boards on that flight along with some budgets for some self-funded passion projects; I was so ready to dive into work when I got back to LA. Life, however, had other plans for me at that time and I had to step away for a bit. Some would say that it was a stroke of bad luck; I just viewed it as my reality at that time.

Is there a quality or characteristic that has played an outsized role in your success?
I believe that tenacity and evolution are extremely important to success in the photography world. Photography is capturing life…capturing the world around us, and that is ever changing. If we are static, if we are unmoved by that world, then our photography will be lifeless and unmoving. I feel very strongly that hard work, the ability to change; to take constructive criticism and tweak what you are doing combined with drive is what is adding to my successes. I am making huge changes for 2017; I am stepping way outside of my comfort zone and bringing a whole new line of work to the table. Some of it will be difficult, but that’s where the tenacity comes in – you have to be willing to continually push yourself. To NOT give up and go back to what’s comfortable, if you want to find new expressions for your passion. As with all things, there will be hints of my former self in this, but I am exploring new techniques, pushing new boundaries and creating new work that I am excited about.

Let’s touch on your thoughts about our city – what do you like the most and least?
I have a love-hate relationship with LA; I know this isn’t an uncommon relationship for many people living here. I absolutely love that I can get a variation of shots. I can be in a studio one day, or on location near the ocean, in the mountains, in the desert, vineyards, lakes etc. Another huge bonus is there is an endless supply of talent that you can collaborate with and work with here. No matter WHAT subject you want, you can have it here. There are actors and models, there are “freaks and geeks”, there are hippies, and there are surfers, adventurers, athletes, artists, rich and poor. Creativity never sleeps here! It’s a city that is vibrant on some days, yet dark and also moody in terms of content on others. I love taking photo walks on my down time. Sometimes my best work comes from grabbing a camera and some coffee and just exploring different parts of this city. There is so much to explore here, from the architecture to the graffiti, to the people and daily life; there is so much to capture and I never feel limited. As a result, this city has provided me with a vast array of shots, some that I share with everyone, some that will be debuting in 2017 and then some that I keep for myself that I will most likely put in a book and throw on my coffee table.

I do wish it rained more often. Now, this one is a little odd I know. But I love the mood that rain creates and how it translates in an image, especially if I am shooting film. I think it has maybe rained a total of 10 days in the four years that I have lived here.