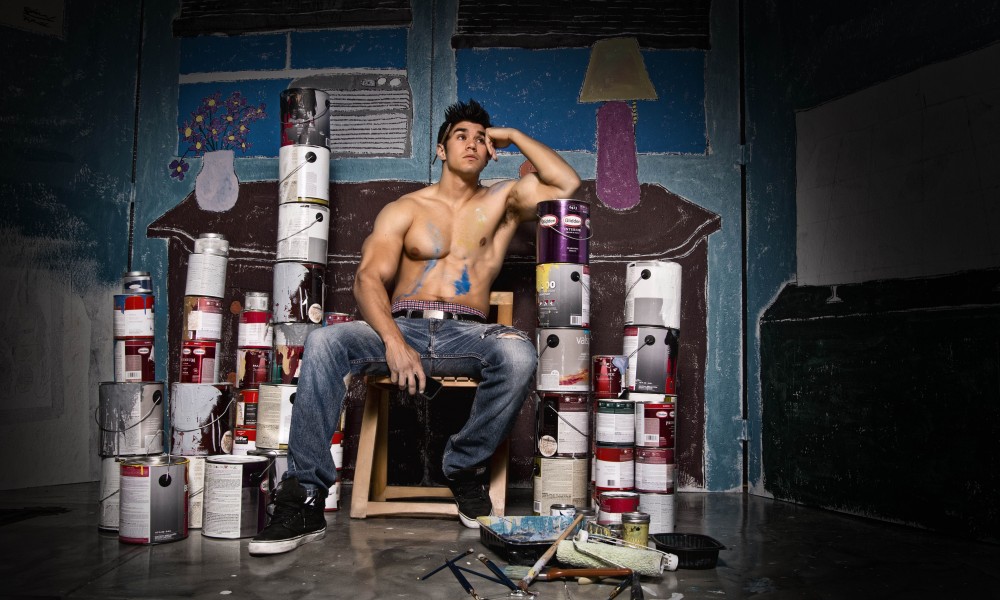 Today we’d like to introduce you to Duke Shoman.

In 2005, Duke started to forge a career for himself. Always drawn by the arts, he dropped out of college at 19 and moved to Italy in pursuit of a career as a fashion photographer. His work gradually turned away from the fashion scene and toward that of high concept art and depictions. Duke Shoman is now a commercial photographer in Los Angeles with a strong focus on celebrity and conceptual photography. His lens has reflected such A-list celebrities as Dan Rather, Michael Irvin, Chris Kattan, Donna Karan, Carmen Electra, Lance Bass, and Arnold Schwartzenegger.

Has it been a smooth road?
My road has been anything but smooth or conventional. Moving to Italy with no family, friends, or contacts of any kind and without speaking the language, I pounded pavement and knocked down the door of every agency I found in a booklet of agencies I picked up at a local bookstore. I relocated without any work visa whatsoever living illegally for a total of two and a half years. My challenges were as odd and harrowing to match my young career, after my second week in Italy I was arrested (but that’s another story), after my second month I found myself homeless for a short stint and was in general constantly denied work from agencies due to my young age and punk rock appearance. I did test shoot after test shoot for over a year before landing my first internationally distributed fashion editorial. I then moved back to the states and became the creative director of a local magazine while starting to shoot international advertising campaigns. Being a freelance artist is never an easy expedition to forge and I constantly found myself out of work and having to supplement my income laying tile, swinging a sledgehammer, and doing subcontract work to make ends meet. But this proved to be one of the most valuable skills I procured on my journey as I now implement the trade I was forced to use to earn a meal to now incorporate in developing and building elaborate sets for my shoots on a regular basis. Having my unconventional professional path I never went to school, and in turn never was able to capitalize on having cohorts or connections in the industry to help me from step to step which proved to saddle me with a very large learning curve. This also allowed me to have a completely unhindered artistic perspective unaffected by the opinions and biases of others.

What moment in your career do you look back most fondly on?
That’s a hard one, I don’t know if I can peg a single moment in a 10-year journey of wins and losses. On the one hand, there is a great sense of pride that comes from producing something on my own accord with no specific buyer or placement in mind but that personally satisfies my exact poetic expression through imagery and makes me smile every time I see it. But from that, its an amazing feeling of having a large client or celebrity say they adore your work and desire to collaborate. I suppose my favorite moments by far are watching people who truly connect to my work react to a new pice by going speechless or in some cases come to tears.

Were there moments when you had to struggle?
I’ve done nothing but struggle through this career! I was homeless in Italy for a short stint at the beginning of my career. Upon moving to Italy I booked my first shoot with a major agency out there and was arrested hours before the shoot while out scouting for locations (but that’s a whole story in itself). And the “NO’s”! I felt like a hungry hippo eating up “No’s” as I showed my amateur photography to agents and being turned away time and time again before getting my first shoot with a reputable agency. I shot test after test shoot for six months before I saw my first paid gig. These are just a few of the things I went through in the early days of my career starting out but things never got “Easy” as the years passed. After moving back to the states I constantly encountered editors that would review my book and skeptically ask if this was truly my work and that it was produced in Italy because of my young age, I was turned away after many meetings because they thought I was lying. I spent many years abiding by the credo of “Being hired from the neck down and with a strong back” working construction, driving trucks, corporate and residential moving companies, anything in the physical labor realm. Professionally speaking a large struggle I’d say I have is not having studied in any conventional method therefore not having any connections as I was getting started. There is a lot of help one can garner from having a mentor, assisting, or having a general pool of contacts in the professional field above you that can funnel you work or speak on your behalf. Any contacts I made, I made on my own or through dumb luck, but that is also something I’m wildly thankful for. I’ve met photographers that have been assisting for YEARS some as long as 5-6 and have yet to step out on their own and develop their own style, work with budgets, get turned down, or try to manage their own business. So the bit of help I missed out on from the nepotism of the industry I have my own unique and uninfluenced style and vantage point when it comes to my work; and all those years of the blue-collar attitude of working till your swollen knuckles can no longer grasp a shovel and the job is done, being applied to photography my clients are always happy at my turnaround, attention to detail, and concern I have for their contentedness of the project as a whole.

What’s your outlook for the industry in our city?
Not starting out here I can’t really weigh in on that. My style is specific to my personality, the industrial locals are what I gravitate toward and that there is a wealth of in LA for sure, but if I hadn’t had the wide open spaces of the country and ability to build the sets for my projects I would have had to become a very different photographer. LA is deficient in that regard which is fine if you are primarily a location photographer, but even to get a large enough place to shoot studio is hard to do without having to dump personal funds into studio rentals every time you want to learn or play with a new lighting style. It all boils down to funds if we’re speaking practically about in shooting in LA, either you pay for your gear, studio rentals, and school. I think there is potential for a large amount of frustration if starting out here being as the competition is so high. LA is one of the top tier cities one has to try to climb the ladder of and I don’t feel one ought to try to climb the highest ladder right out of the gate, it’s not fair to the person climbing to be saddled with such a large nut to crack and can feel very overwhelming. Hell, its overwhelming for professionals that have been at it for several years. Also the industry mentality of LA isn’t a healthy environment for someone starting out, in my opinion. I first and foremost consider myself an artist, I facilitate my art primarily through a camera lens, but am also a musician, contractor/sculptor, writer, and storyteller but all of my art had to be honed for YEARS in a journey of trial and error, success and failure, susceptibility and aversion, and seeing what I, as a creative mind, find works for me. The industry mentality feels to me as though it has people starting out chasing this connection or that connection and this guy can set them up with this “Great project that is still on the ground floor” and people waste their time, energy, and emotion in chasing specters whispering money instead of creating and developing something that they themselves love. Don’t get me wrong, we all need to eat, I’ve been down to my last $40 several times in my career with a check no closer than 2 weeks away, but the artist must first spend a wealth of time creating art for art’s sake, being well aware that no-more than the people they show it to by hand will ever witness its completion.