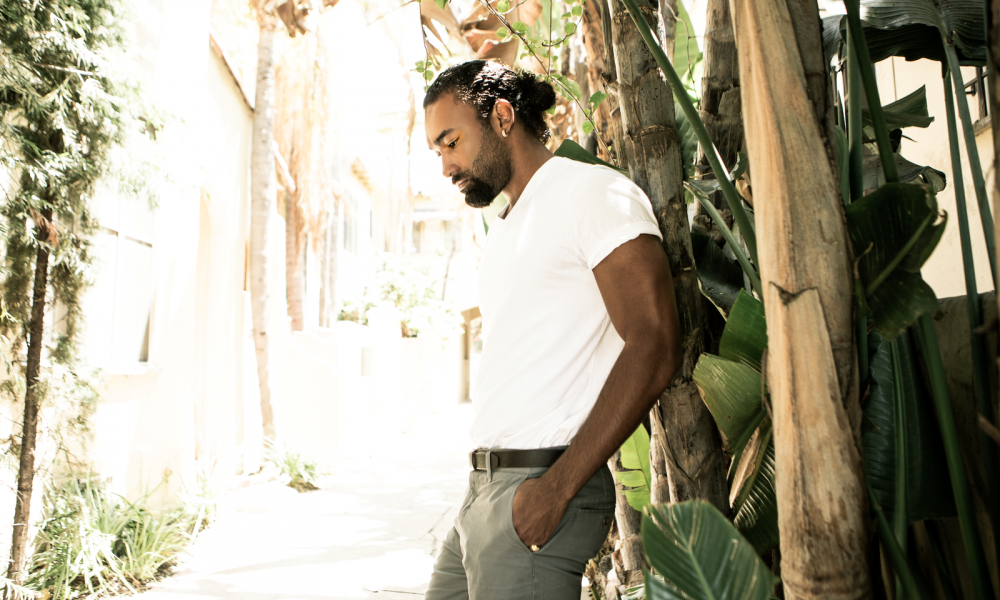 Today we’d like to introduce you to Drew Vision.

Drew Vision is a singer, songwriter, actor and model that moved to LA from NYC 3 years ago. He is independent, self-made and committed to expressing himself through his craft.

Born and raised in Jamaica Queens, the singer (real name Andrew McCreary) grew up surrounded by the influences of soul and gospel. Drew, along with his entire family including his twin sisters only 14 months younger sang in church since the age of 5. Fueled by the support of a chorus teacher that recognized Drew’s natural relative pitch and music gift, he began actively singing in high school and went to college on a full vocal scholarship. There he studied every aspect of music and vocals, learning opera and how to sing in multiple languages.

After school Drew Vision released his first two projects, “20/20” and “The Doldrums” and worked the NYC showcase circuit. He began modeling to fund his music career and had major campaigns with Pepsi, Lays and Coach.

In June of 2016, Drew hired media executive Ron King to manage his career. The duo’s first project was the release of Drew’s 3rd album “The Balance” which led him to center stage at the 2016 Essence Music Festival where he got the attention of People Magazine. The momentum from this project led Drew to Sweden where he recorded the pop-infused single “Without You” and subsequently shot the music video in Barbados. The video, directed by Vision and produced by King, was picked up by BET and kept in rotation for six months.

The success of “Without You” garnered press from Billboard, Vibe and Huffington Post and the buzz got the attention of 9X Grammy-winning producer Bryan Michael Cox. The two artists spent 2 ½ weeks in the So SoDef recording studio in Atlanta writing and recording the 5-track EP “Shades of Summer” with B. Cox as Executive Producer. The video for “Shades of Summer’s” first single titled “Want EmAll” premiered exclusively
on Billboard along with an in-depth interview with Drew Vision and B. Cox. The second single, “Deep Water” reached almost a million streams on Spotify.

Now residing in Los Angeles, Drew is laying the groundwork to create a long-lasting career and becoming a household name. In addition to being SAG-eligible from starring in Cadillac’s Oscar commercial, multiple campaigns for Facebook and on-camera hosting for a division of People Magazine, Drew just released his latest album “Hybrid” as an independent artist. The project was supported by Billboard and Tidal named Drew Vision their ‘Artist of the Week’. To promote the album, he has performed all over LA including sold-out nights at Sayers Club, The Troubadour and The Roxy.

On top of his music career and commercial work, Drew has spent the last two years studying acting with Tasha Smith & Caryn West in LA and Susan Batson in NYC, leading to some high-profile auditions and very promising feedback from some of LA’s top casting directors & executives.

Drew Vision is an artist that really does have it all; he’s a multifaceted and incredibly talented singer, songwriter, actor and model….he is living in his purpose.

Overall, has it been relatively smooth? If not, what were some of the struggles along the way?
I personally don’t believe the easiest/ smoothest path is even worth taking. I knew there would be obstacles but I had no idea how bad it would really get! There’s been so many moments where I felt like it would be better to get a day job and live a more structured life but I knew there was work for me to do that will one day heal people in a different kind of way.

Creatively it is sort of a mind fuck to put yourself out there to be judged, accepted, rated over and over again. That feeling of vulnerability takes a lot of strength and belief in one’s self. I tell people that it feels like stripping down naked and walking through Times Square (before COVID-19).

Professionally, the challenge has been trying to stand out and get noticed by fans, executives and financiers. Not having the proper budget to consistently put out the type of content that we are capable of has been one of the biggest obstacles as well.

Please tell us more about your work, what you are currently focused on and most proud of.
Drew Vision specializes in vocal performance and songwriting. He has successfully blended genres of rnb, pop and trap with his own catalog and his music has been featured on several hit tv shows.

His two proudest moments include Center Stage at the Essence Music Festival and Billboard’s interview with Bryan Michael Cox. Interviews, videos and other content can be found here: https://www.youtube.com/channel/UCQgaqtvzDVPD8SD-RO8-heg

What is “success” or “successful” for you?
Success is making a living doing what you love and being able to change lives in a positive way. At times in my career, that has literally been booking a gig that can cover my car note. At other times, it has been tens of thousands of people watching my day (as I took over Billboard’s IG for a day) and commenting on how I have inspired them.

I am very interested in helping others on this journey, as it requires a lot of support. It takes a village. In the end, I want to know that the world has been a better place because I shared my talent with others.