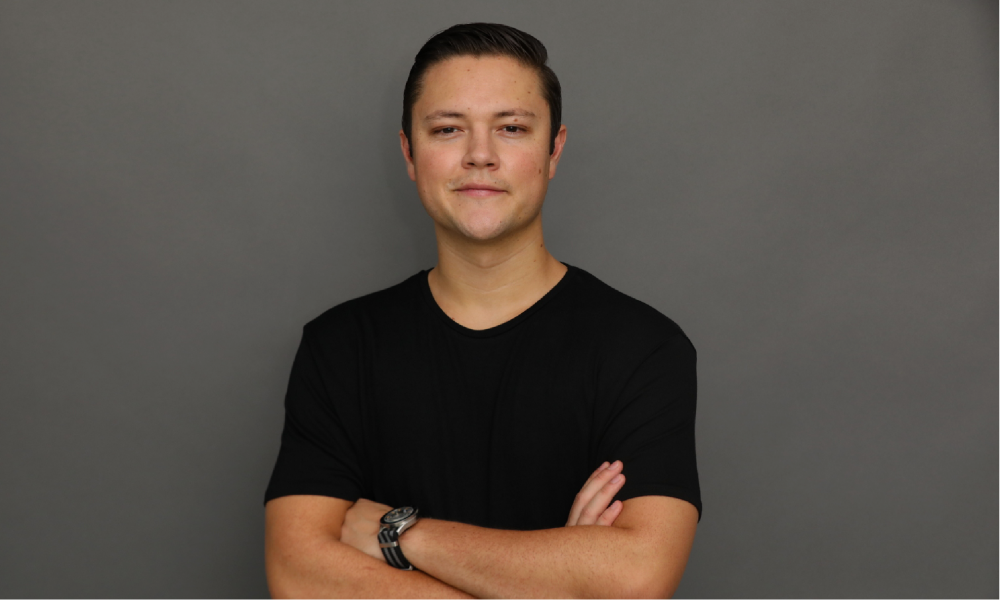 Today we’d like to introduce you to Derick Manlapeg.

Derick, let’s start with your story. We’d love to hear how you got started and how the journey has been so far.
When I was 19 in community college, I had a crazy idea about starting the next “Social Network”. I was never entrepreneurial before that point (and didn’t know where to start) but the idea of creating a better platform to connect people fascinated me due to the fallout of MySpace and the rise of Facebook. This crazy idea would keep me up at night and I started spending most of my day drawing mock-ups of what this platform would look like.

One day on campus, a classmate walking by the cafeteria saw me making these drawings and thought it looked interesting. They proceeded to sit down and asked me what I was doing and what the drawings were for. After discussing with them the idea, they were hooked and wanted to get involved. Coincidentally, this person had a decent understanding of Adobe Photoshop (a design tool that was popular in creating web/mobile applications) and was able to bring my rudimentary drawings to life. This was exactly what I needed to move this into something more real than just an idea.

After a few months of working together, my co-founder decided he wanted to pursue a better education and transferred schools in a different state. We eventually lost touch and that was when I realized I needed to be something more then an “idea guy” and start building a technical talent or this idea wouldn’t move past being just an idea. I decided on becoming a “designer” since that would enable me to come up with a brand, design the web application and put together marketing materials. What was the best way to accelerate my skills? Finding other co-founders of different projects and asking them if I could help. This thought set me on a path that led to me joining startup meet-up groups and startup networking sites (Co-Founders Lab, Founder2Be) where I learned about what other folks were doing while being able to take on design opportunities for sweat equity. At first, I didn’t know how to design, but after getting project tasks and watching endless amounts of educational YouTube videos, I started getting better which pushed me to take on more start-up opportunities and continue with this cycle.

It was a year later that I eventually got an interview in Hollywood for a start-up named “Clout” which was doing massive innovation in mobile payment processing at the time. This was bigger than your average two person startup and they had a full team of over twenty individuals with backgrounds like Microsoft, Apple, Goldman Sachs, and many others massive companies. I knew this opportunity was completely out of my league (not to mention a three hour drive from where I lived at the time) but the chance to work with this start-up excited me and I accepted the interview. I had about two weeks to prepare, so I bought my first cheap suit online and bought a second one for my roommate. We worked out a deal where I would take him out for a beer if he played my “personal assistant” and took notes while I pretended that we ran our own creative agency. I had nothing to lose (and neither did he) so when we arrived on interview day we both played our roles and delivered. A week later, I got extended the opportunity to join the team and jump in.

After a grueling few months of long drives to the new office, one of the co-founders of Clout offered up an opportunity to live in the start-up home that he and a few other co-founders were living in and working out of. I jumped at the opportunity and moved from Oceanside to Hollywood. This move set in motion a new entrepreneurship path that led to many more failed startup-ups (yet awesome learning opportunities), me creating a real creative agency that specialized in providing minimal viable startup services (like app mockup designs, branding, pitch decks), and eventually founding my own start-up in the legal industry for something entirely different from my original “Social Network” idea.

Now I’m living in DTLA running my new tech start-up “VantageBP” helping some of the world’s biggest companies stop counterfeit products from being sold across e-commerce marketplaces like Amazon, eBay, and Alibaba. It’s crazy how one thing can lead to another as long as you just try.

Great, so let’s dig a little deeper into the story – has it been an easy path overall and if not, what were the challenges you’ve had to overcome?
Self learning is rewarding but it also comes with its own challenges. You have feelings that you are an imposter since you don’t always know the “industry speak” and do things your own way rather than the ways of others. Every failed start-up I joined was also a hit personally – especially due to contributing so much time and effort for something that ceases to exist. Despite those failures, I continued to maintain a positive attitude that these were all learning experiences that would lead to something much bigger then I could ever anticipate. I could never have been more right.

After starting my own creative agency, I came across a small company that was working on a really interesting product in the e-cigarette/vaping industry. This was totally out of my element since this was the first tangible product I would come to work on (rather then a mobile app). After consulting with them on branding and design, I came to grow fond of the product and the team which lead to me joining full-time to get the product launched. After one year, we finally released the product to market which was a wild success. However, after three months of great sales, everything came to a halt. Our distributors stopped buying our products and so did our retailer accounts. When asked why they mentioned that they didn’t need to continue buying our products from us because they could buy them on eBay for 80% less then what we sold it to them. We were shocked and didn’t believe it at first until we looked for ourselves – counterfeiters had reproduced our product and were selling them for a fraction of our cost. Counterfeiting was, to us, something the biggest companies in the world like Nike and LV had to deal with, not a small company such as ourselves. We literally had been put in a position where all of the time and money we invested was being stolen from us by thieves.

Within days of this discovery, we started approaching law firms to see if anyone could help us combat this threat. Law firms (we quickly realized) were incredibly expensive and could only target a handful of the thousands of counterfeit product listings that were being sold across the internet. Additionally, paying an attorney an hourly rate to search for these counterfeiters was incredible expensive and not practical for any sized company. After multiple attempts at getting this cost down, we decided to abandon the idea of working with attorneys and decided to handle it ourselves.

After multiple failed attempts at contacting eBay, we finally got ahold of someone in the legal department that was surprised we were able to get ahold of them. After pleading with them our case, they gave us access to an internal tool that gave us the ability to file our own complaints on their platform and remove these counterfeiters ourselves. This was our break. However, we realized how much effort was required in filing multiple page reports for every single infringement (when we had thousands of them on the marketplace). This led to us coming up with the idea of automating the report creation and submission process by building a bot that would fill out the forms required in a streamlined way. Within a few weeks after that, our counterfeit problem was eradicated and our competitors reached out to us asking if we could help them. This lead to the thought that we could help other companies facing these same issues and a new company was born.

Alright – so let’s talk business. Tell us about VantageBP – what should we know?
VantageBP is an online brand protection technology that scans the internet looking for counterfeit products, intellectual property infringements, and rogue resellers online. We do this by having scanning technology that is integrated with over 160 e-commerce marketplaces. Our automated technology quickly identifies threats, notifies the unverified seller to authenticate their products and if they are unable to do so we will file an enforcement take-down with the marketplace to get them removed. This technology has resulted in the removal of over 1.8 million infringing product listings for some of the world’s largest brands.

Our unique value proposition is our transparency, efficiency, and ability to tackle any size problem for any size company. We’re incredibly cost-effective (especially when compared with a law firm) and can expedite the removal of thousands of infringements within days of starting our service. This has lead to a massive innovation in an antiquated brand protection industry which is leading to rapid growth for our company.

I’m most proud of the VantageBP team as every team member we have is exceptional at what they do and is passionate about the problem we are solving. We love working with companies that are also passionate about their products and we want them to grow without having to deal with these issues. Saving businesses is our mission and are excited to continue to innovate within the brand protection industry.

Is there a characteristic or quality that you feel is essential to success?
Ability to overcome failure by seeing it as an opportunity for growth.

Taking on opportunities that you may not be qualified for because you should always give yourself a chance.

If you’re going to do something, do it with passion and go all-in. Surprisingly enough, solutions present themselves when you are passionate about solving them and do not give up.

Get out there and network! Speaking to your start-up peers helps get you out of a bubble and see what’s working for others that you can take and apply to your own start-up.