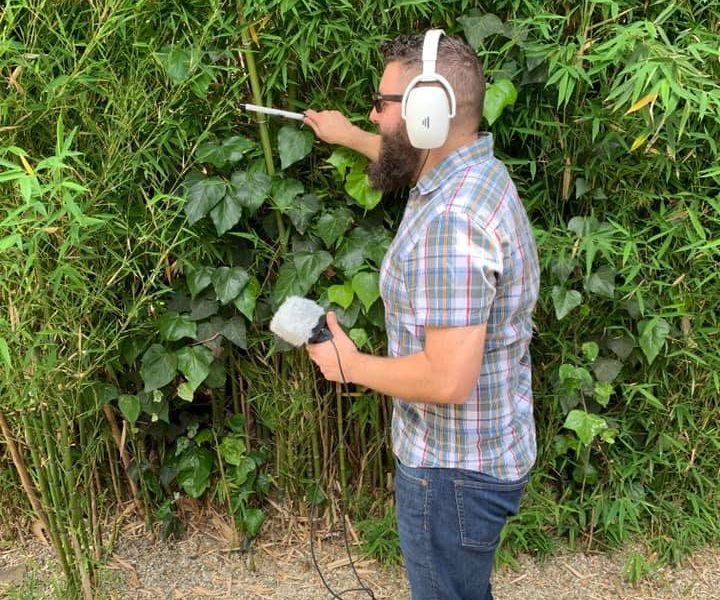 Today we’d like to introduce you to Jason Soudah.

So, before we jump into specific questions about what you do, why don’t you give us some details about you and your story.
I was initially pursuing a career as a singer-songwriter, between Cardiff and London in the UK, showcases in the US and radio play either side of the pond; but I didn’t feel that I was “in” the industry until after a chance meeting towards the end of 2009. A fellow singer-songwriter friend, Alex Vargas, was in LA from London and invited me out for a drink. Alex and I were joined by another friend of his and at some point towards the end of our evening, she asked me what I did. I said I was a singer-songwriter but that I would love to do film music one day. She was asking me some very specific questions so I asked her why she knew so much about film music and she said, “my dad’s a composer.” Later on that night, she offered to show Alex and I in her dad’s studio and I was super excited – I love studios! We got there around 2 am, went inside, and she asked the armed security guard if she could show us her dad’s room. We entered into this amazing, mostly black and red room, with lots of sofas, a beautiful grand piano in one corner, a huge wall of moog, lots of guitars, computer screens, racks and racks of computer equipment, and movie memorabilia… I asked, “who’s your dad?” She replied, “Hans Zimmer.” She (Zoe) said that if I was serious about pursuing this, she would introduce me to the studio manager to see about me interning. I am so thankful to Zoe til this day for giving me this chance. I went on to intern at Remote Control Productions which led to me being hired by composer Matthew Margeson as his technical assistant. Matt took me under his wing, helping me develop my scoring skills, and he continues to mentor me to this day.

Overall, has it been relatively smooth? If not, what were some of the struggles along the way?
I know it hasn’t been as rough as it is for others, and I am sadly at an advantage, being a man… there have definitely been struggles – what I would say though, is that it feels like every time I nearly gave up, or felt things were getting too much or too hard, it was right then that a breakthrough would happen! I would never have got to where I am now if I had quit (obviously)! I know this to be true for other people as well – for example, a composer friend of mine was starting to question whether it might be time to leave LA and then BOOM, got a great opportunity to score a TV show! So, if you are following your dream/passion, whatever it is, please don’t ever ever give up!

Please tell us more about your work, what you are currently focused on and most proud of.
I am a composer, vocalist, songwriter, mix engineer and producer, but my main job is a composer, primarily for movies and TV. I specialize in guitar/synth/percussion/hybrid sounds infused with orchestral scores, as well as arranging songs for trailers. I would say I am known for always putting in way above and beyond on every project – no matter how big or small. I can’t help myself! I can’t rush work and send off something sloppy… I am really dedicated to making what I do sound as good as I possibly can, and my clients appreciate this enthusiasm and dedication, as well as the sonic quality of my music/mixes, so I am thankful to say that they all (apart from maybe 1 in the last 10 years!) come back to work with me again and again.

Any shoutouts? Who else deserves credit in this story – who has played a meaningful role?
I have had many mentors and supporters and cheerleaders – from my parents and brother, to friends at school, fans of my band, my band, engineers and producers I have worked with, artist managers, ASCAP especially Simon Greenaway, Jennifer Knoepfle (when she was there), Jennifer Harmon, Michael Todd, Jason Silberman, Zoe Zimmer who I mentioned earlier, the studio manager at the time I started Czarina Russell, all of Hans’ team at Remote Control Productions, Al Clay, and a bunch of composers and tech assistants I worked alongside at the studio, all the composers I have worked for. The main ones recently have been Matt Margeson, who taught me so much about writing to picture and writing for the orchestra (basically all I know on that front), Al Clay who taught me so much about mixing and producing, working with musicians, finding solutions when I was at crossroads. Also, music editors such as Dan Pinder and Jack Dolman have both been massively encouraging and helped me hone my skills. Chuck Choi and Ryan Ouchida have helped me so much with studio tech issues over the years – I still owe you guys dinner! I honestly wish I could name everyone who has helped me – I am so thankful to them all and I also hope I have helped others along the way, as I am keen to do so – this is a “pay it forward” world, or at least I do my best to make it so. My wife has been the most important supporter – encouraging me, helping me figure out some difficult decisions, and of course dealing with all the crazy hours I used to do in the early days, being so understanding of my absence, and sharing in the successes. 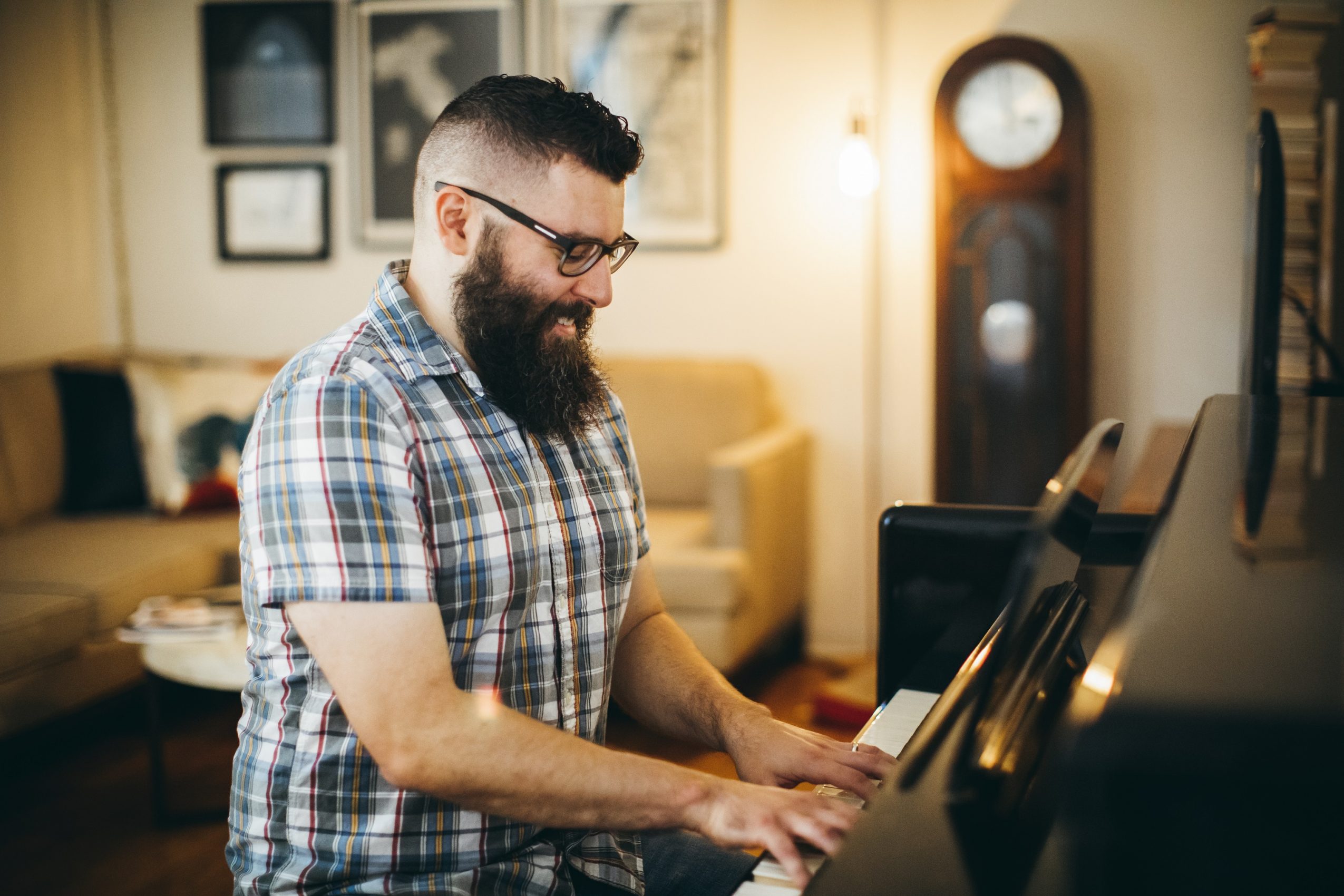 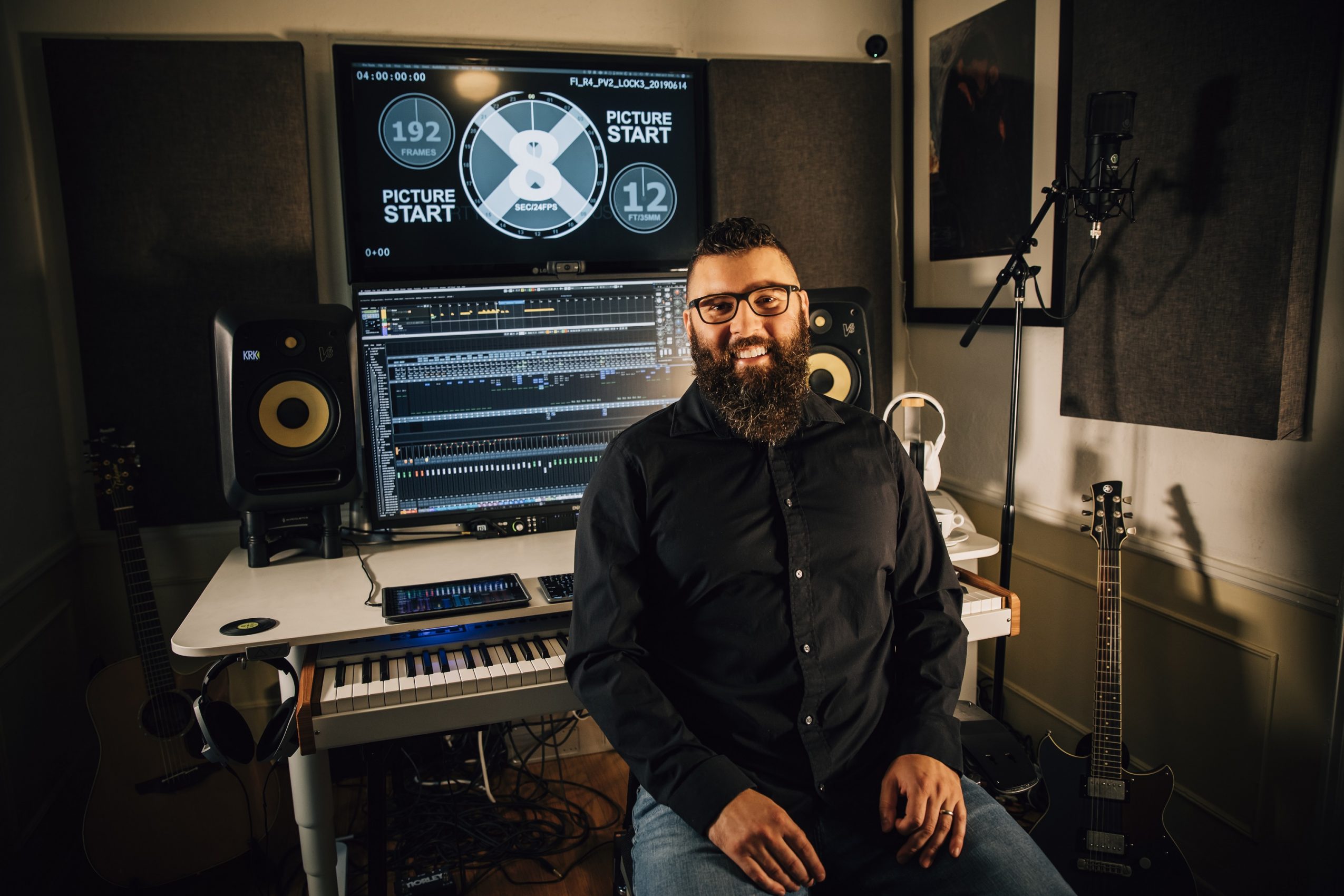 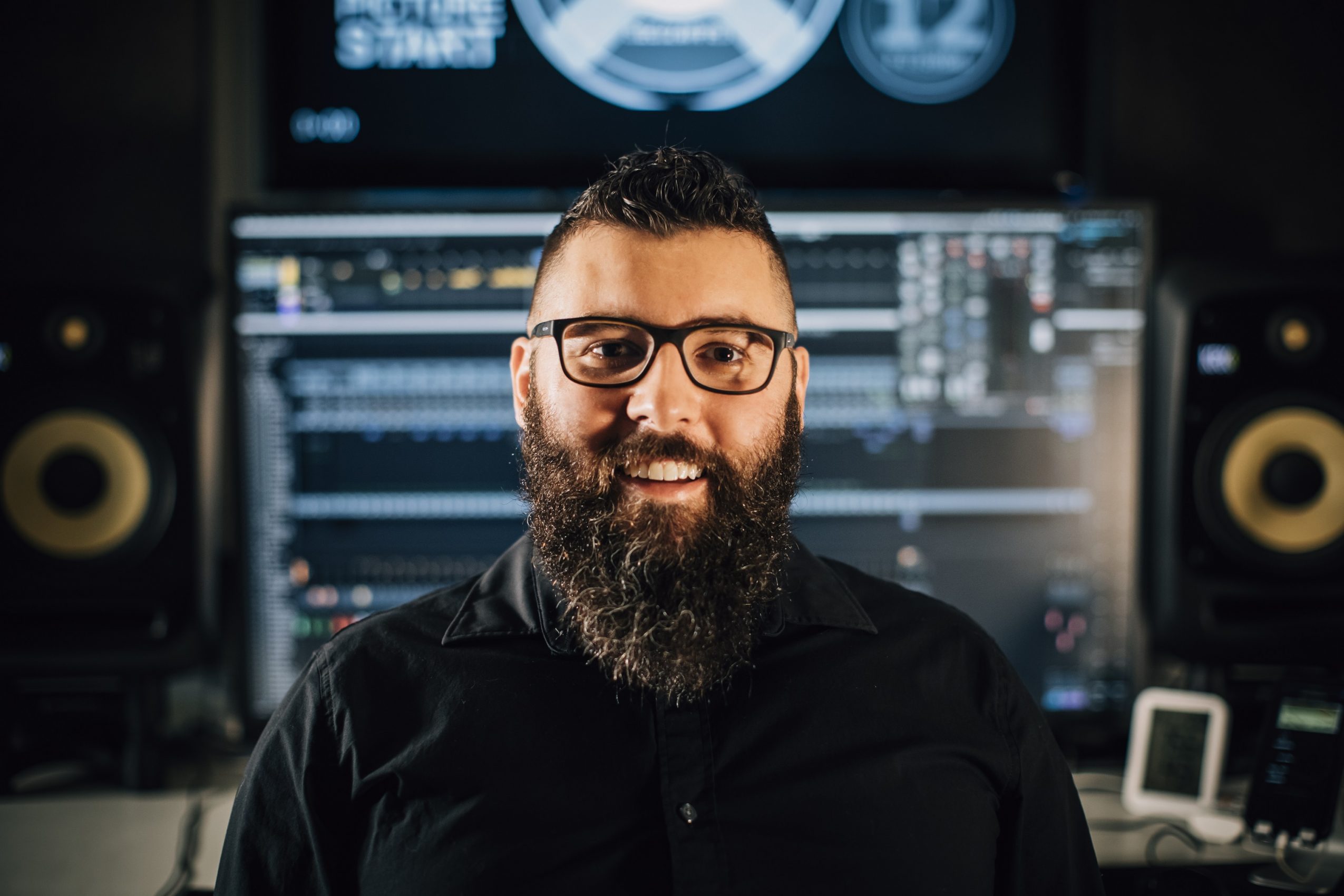 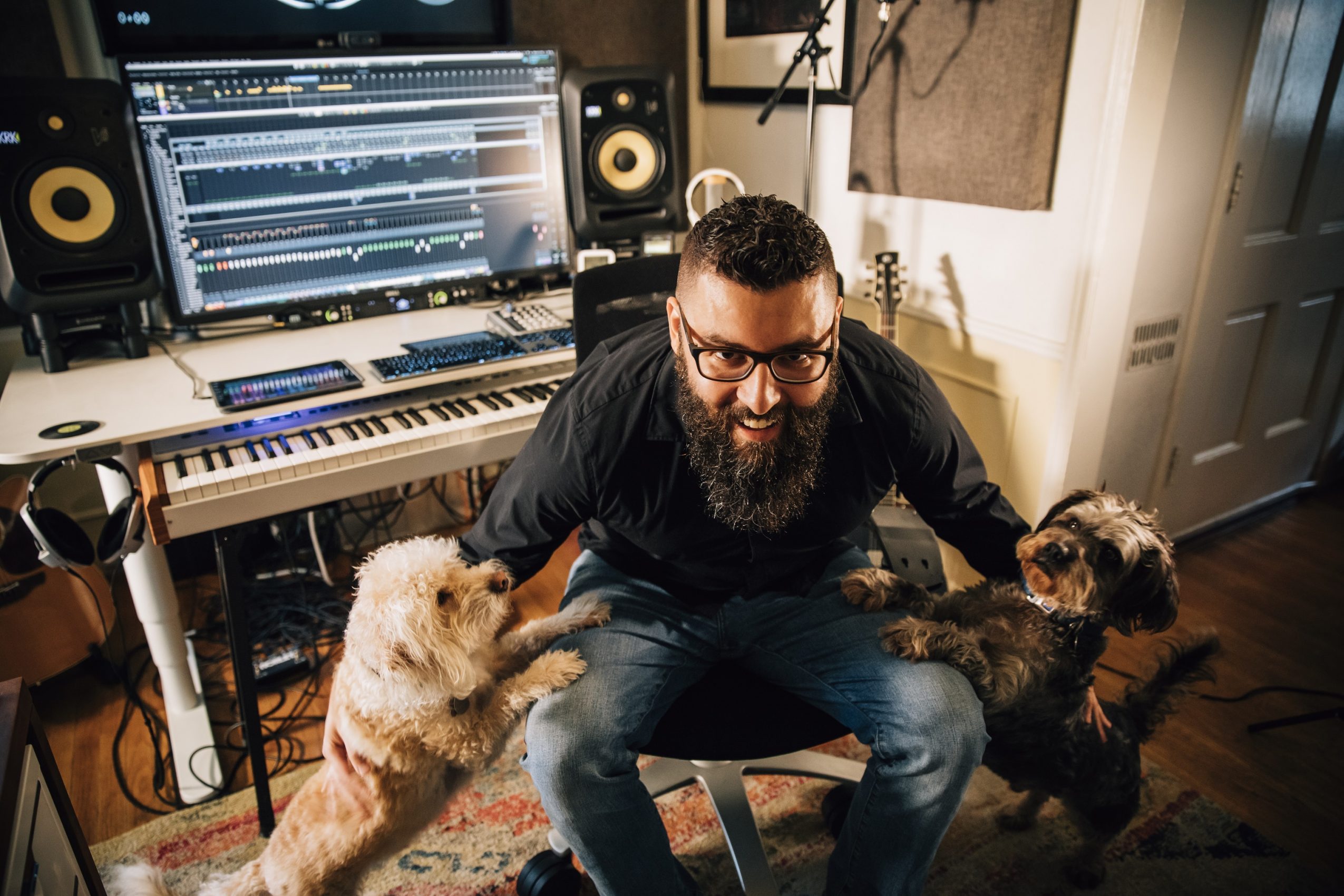 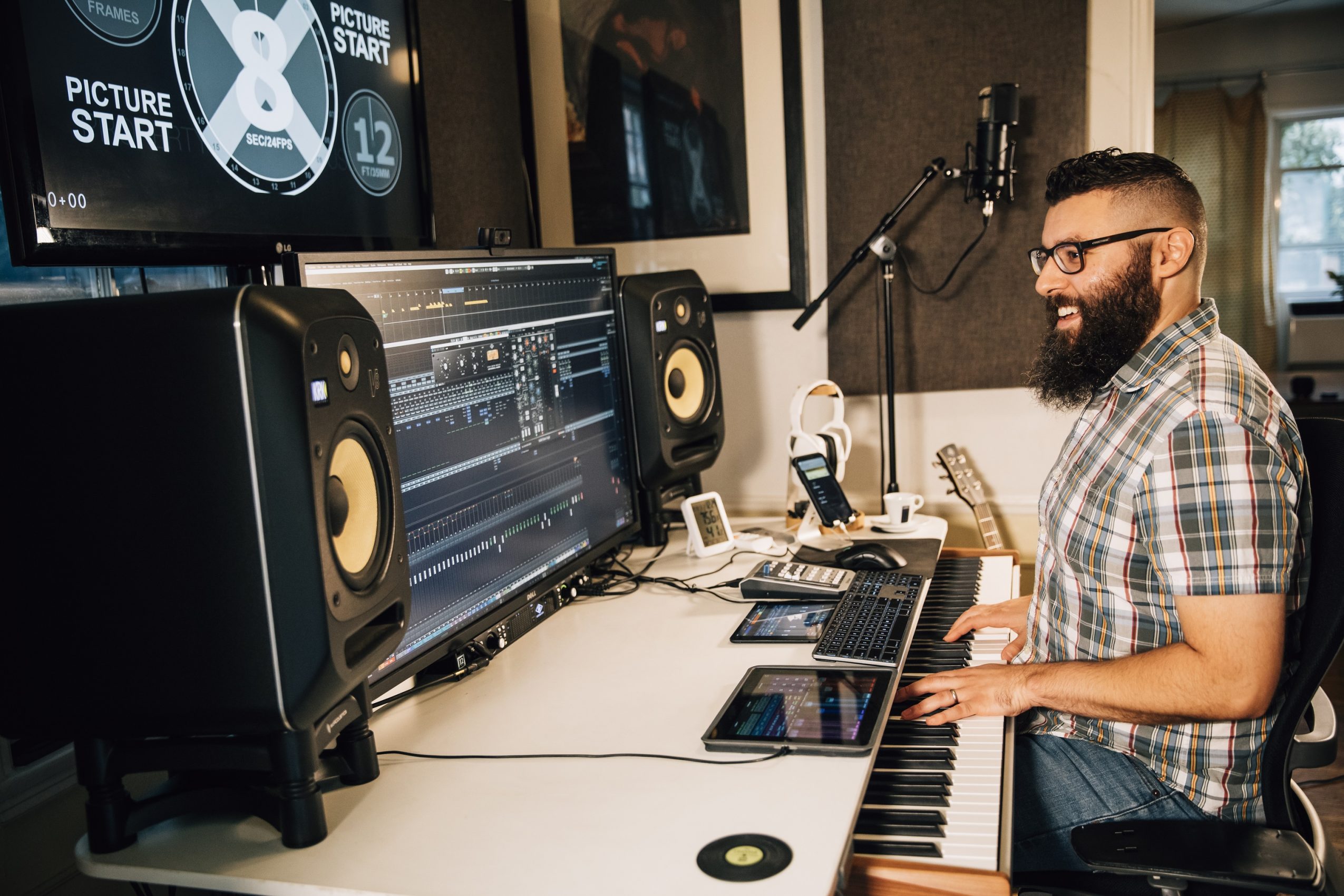 Image Credit:
Michelle Shiers, Amarra McHale (just the picture of me outside in headphones)