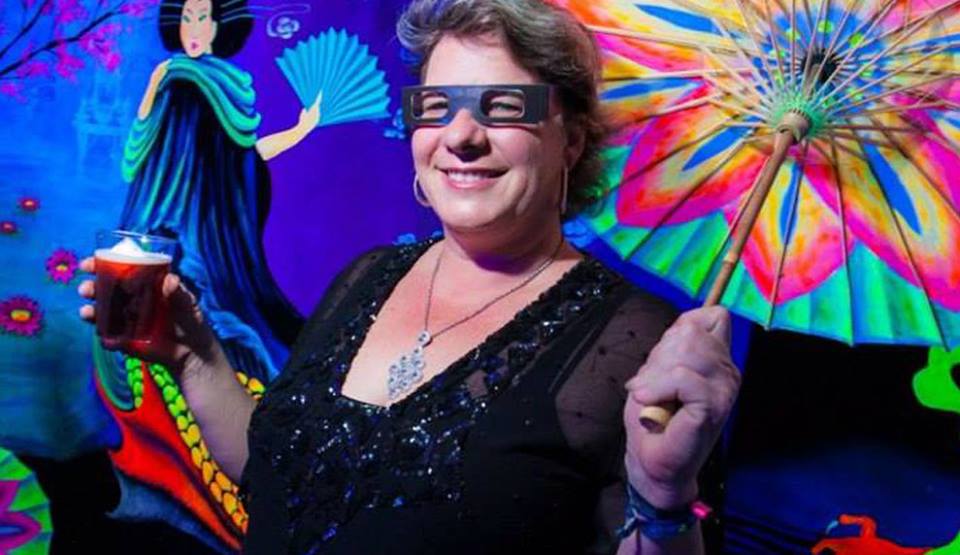 Today we’d like to introduce you to Debi Cable.

Debi, can you briefly walk us through your story – how you started and how you got to where you are today.
Growing up in Orange County, I spent my summers immersed in the Laguna Beach Art World, of the Sawdust Festival, Festival of Arts and even performing in the World Famous Pageant of the Masters. Inspired by the diversity and creativity of the artist’s community, my path as an artist and painter became clear at a very young age.

After several years of showing at the Sawdust Festival, I was called to paint for the Hotels and Casinos in Las Vegas. I joined the creative teams designing the worlds most prestigious and ambitious projects, such as The Venetian Hotel and Heart of the Paris Hotel where my favorite project, a 32′ radial design still graces the ceiling of the elevator lobby that Millions of Guests each year enjoy.

I returned to So Cal starting my own high-end painting & faux finishing business, that brought me to Downtown Los Angeles, where I joined the LA City Arts Council and networked my way thru the community, connecting the Marketing and Business community with Local Artists. Co-founding the Arts Squared public art gallery in Pershing Square, Becoming the Burning Man, LA Regional Art Director and the Vice President of the LA League of Arts.

Co-producing a number of Arts and Music events around the City, including DTLA Artwalk, Burning Man Decompression and invited “Autumn Lights” to Pershing Square for LA’s first illuminated Arts festival.

I had dreamed about painting a large Koi fish on the carpet for the show, and realized that It needed to GLOW for it to work in the show! Fluorescent paint was the answer, & my blacklight “Carp”ettes and giant portable Koi ponds were launched around the same time, the Beyond the Streets Exhibit at the MOCA Museum the LA street art Movement exploded out from the museums and galleries into the streets and on to every blank wall.

I was invited to paint a 120′ UV koi mural, (the first of its kind on the west coast) on Tom Gilmore’s Parking Garage on Winston & Main Street, in the heart of the LA Artwalk, Even as I was painting the mural I was often approached by residents in the area , and told just how happy the mural made them, the bright colors the serene images of giant fish swimming by, inspired joy in all ages, actor Dave Foley (Kids in the Hall) drove by, as his 6 yr old daughter stopped to tell me how beautiful it was. I was overcome with emotion on how the Art had such a positive influence on someone so young. creating art that makes people truly happy is a gift I wanted to share with more people.

It was clear that I was on to something Magical.

I joined a small team & started a business, creating a Mobile blacklight mural installations and added my trademark koi fish carpets, and space-themed ceiling. We began showing at arts and music festivals up and down the west coast. I started creating larger mural themes and cohesive installations, starting Alice in Wonderland themed rooms for Beyond Wonderland and Nocturnal Wonderland and then To the Largest Music n Arts Festival in the US. “The Electric Daisy Carnival” in Las Vegas. Sharing the installation with over 80,000 guests in one weekend!

Since then the installation has been seen at the biggest Arts and Music Events in the Country, Sunset Music Festival, Lightning in a Bottle, Burning Man, as well as the highlight of the Brewery Artwalk, the Beverly Hills Art Show and the Lancaster Museum, and even Created Halloween installations for Playboy Mansion and YouTube studios and their roster of internet influencers.

We’re always bombarded by how great it is to pursue your passion, etc – but we’ve spoken with enough people to know that it’s not always easy. Overall, would you say things have been easy for you?
Oh As an Artist It’s always a random adventure into the unknown.

I dove into the LA art world and created a good reputation as a talented art creator and event producer, and connected with a small group of burners to start producing a traveling 3d Blacklight installation together, I took on the partnership and the exclusive artist for the project, Even though we were really taking off with event producers, my partners only seemed to be in the way, dragging out long meetings and 8 months to approve even a logo, not willing to actually move forward with submitting for events , it was excruciating.

Once we did start bookings, it became clear that there was another agenda. They were using the installation for their ” Side” business, of selling festival “party favors”, Not what I signed up for at all , they tried to blackmail me for rights to my own artwork, they unsuccessfully tried several times to just steal the murals , and the final straw was when they tried to steal the truck with all of my creations & emptied the company Bank Account for $20,000 while we were still on tour… I’d had it with the incompetence, I walked away, & I haven’t spoken with them since.

“Cable’s hand-painted fluorescent murals create immersive, architectural environments enhanced by her signature Black-light 3D Glasses, which explode the masterpieces into a visual carnival for your eyes, imagination, and Instagram feed. A former resident of the world-famous DTLA Brewery Art Colony, Cable is as active in promoting art as she is creating it — co-founding and curating Pershing Square’s Art Squared Gallery, and acting as the Burning Man Regional Arts Director for LA.

Debi Cable’s 3D Art Gallery has been featured at music and art festivals around America including the Lancaster Museum, Beverly Hills Art Show, Lightning in a Bottle, Electric Daisy Carnival, YouTube, Beyond Wonderland. Each year it gets bigger and trippier than ever. Debi Cable 3D’s installations will create a photogenic love-fest for all who enter her black light experiences.”

What were you like growing up?
I’m a Southern California Native, born in Newport Beach, at the same time as the final voyage of the Queen Mary sailed by the Hoag Hospital Windows. Grew up in Huntington Beach, where I spent much of my childhood at my Grandparents 20-acre dairy ranch, riding horses and playing with the cows and chickens.

My Family moved to Irvine, elementary schools, and began swimming towards and Olympic dreams, when my parents divorced and moved to Durango, Colorado where I learned about hunting and fishing, and the ways of a small town, wild west community, where my brother Seth was born. We returned to So Cal, where I really found my passion for Art and talent developing, winning art shows, even at a very young age. 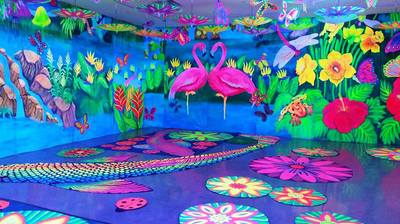 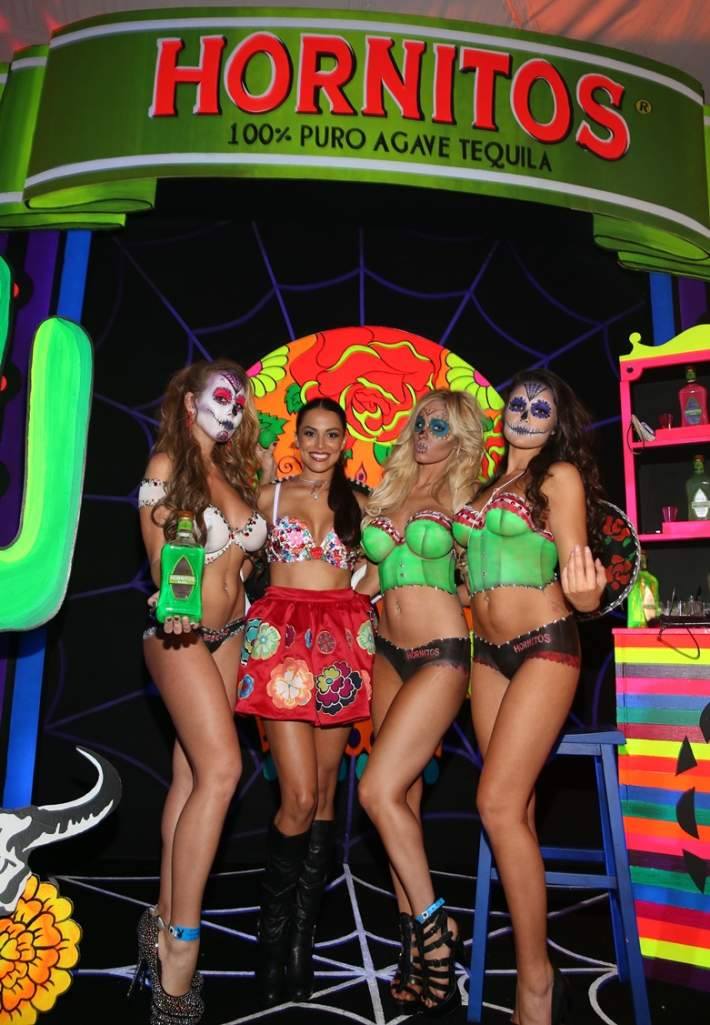 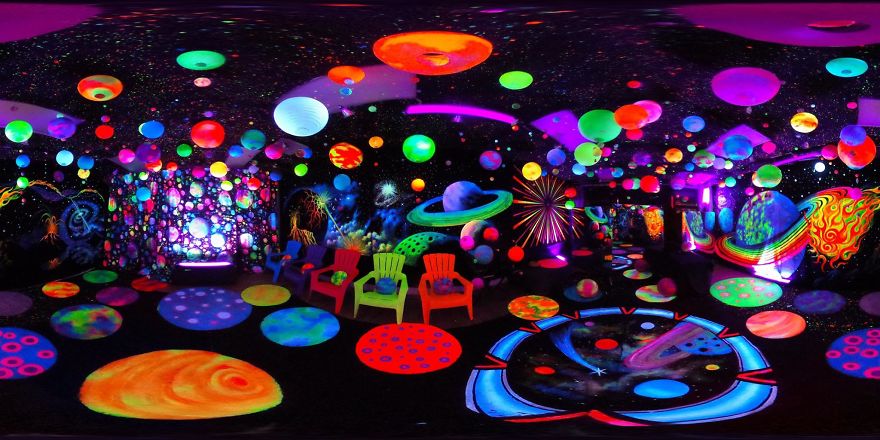 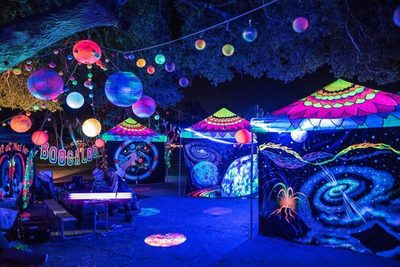 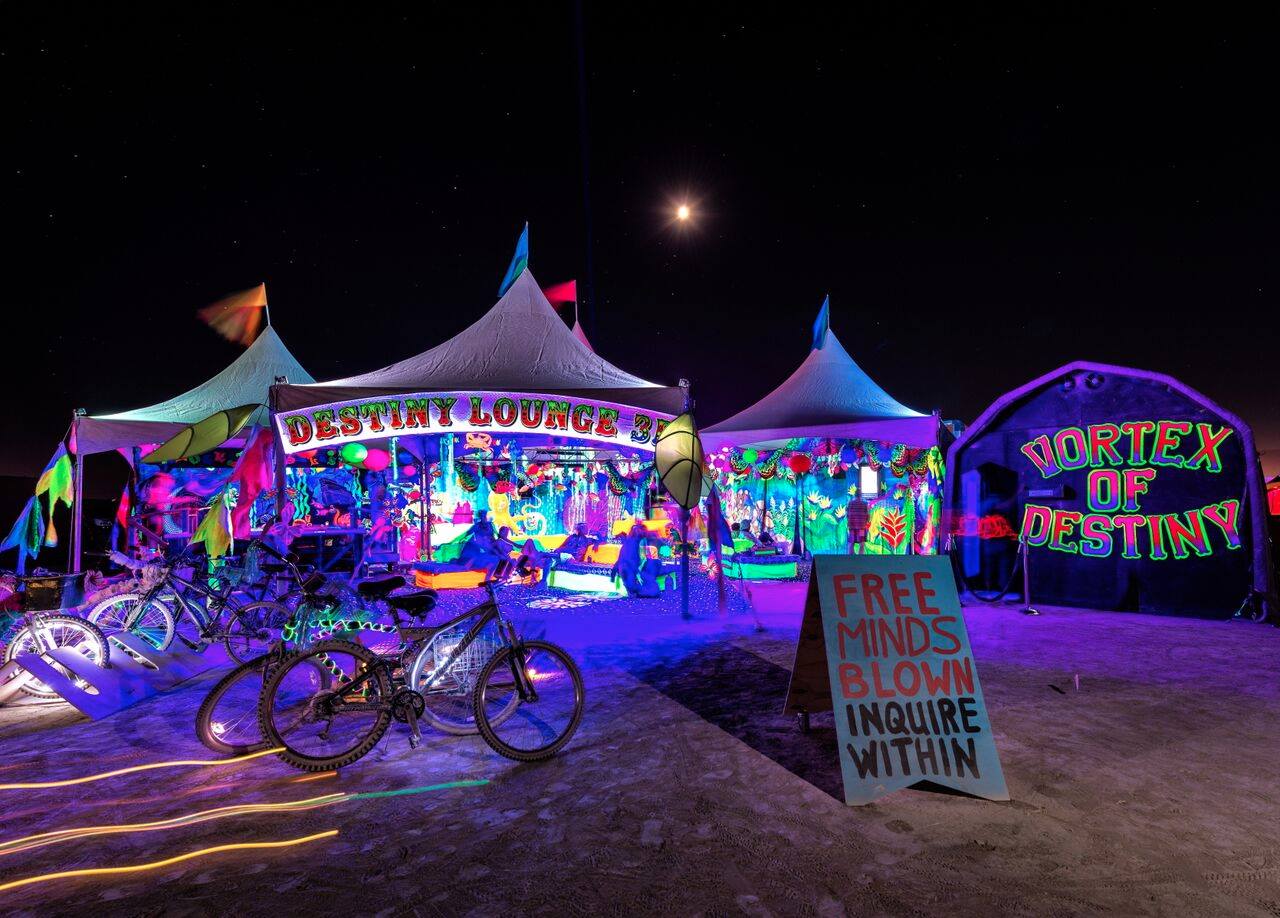 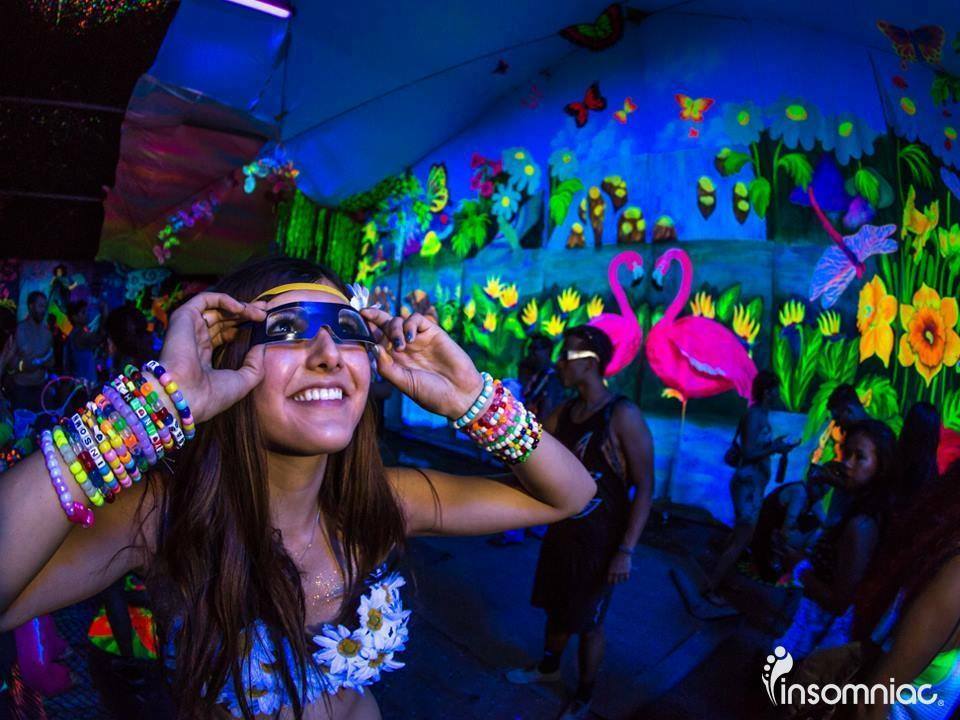 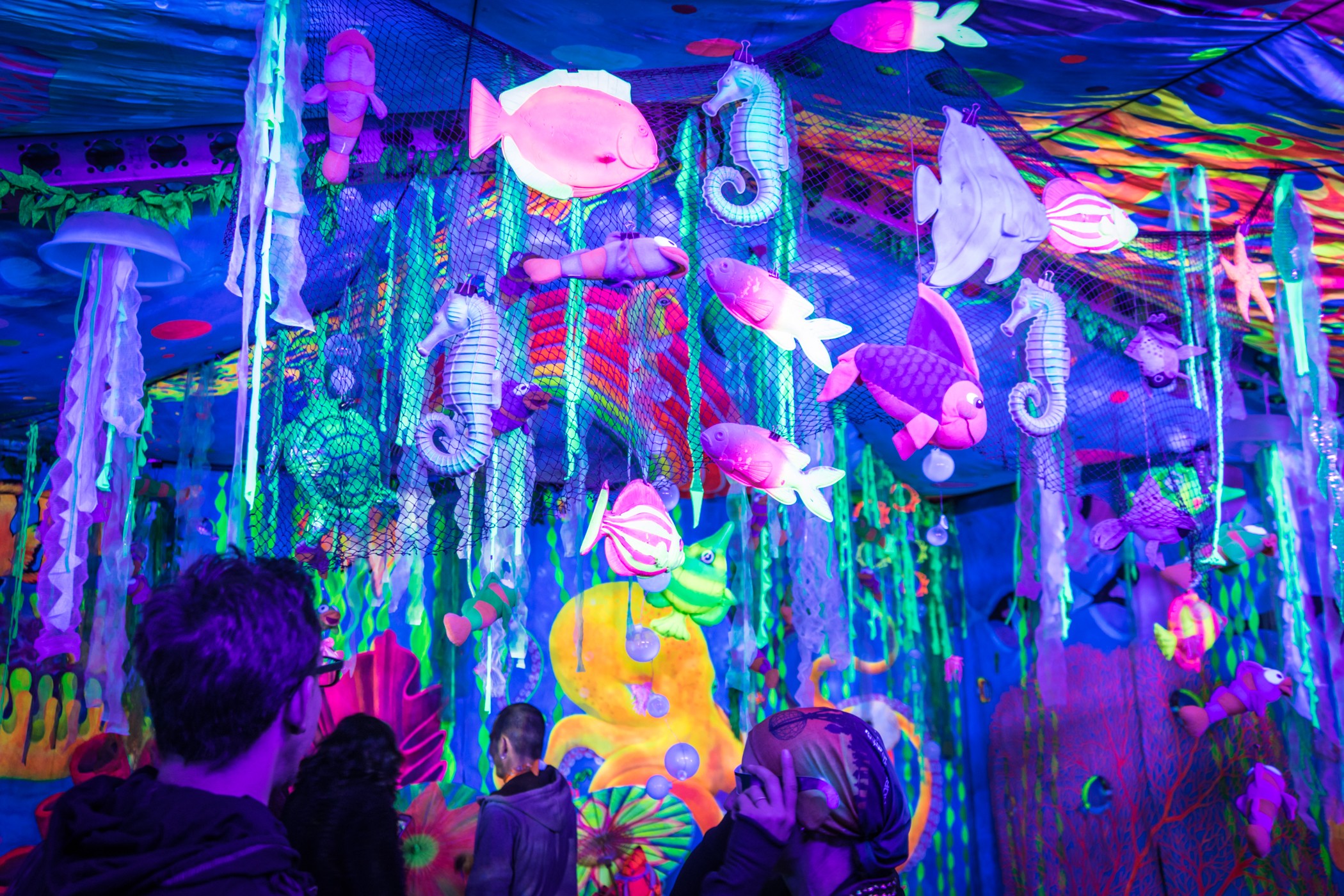 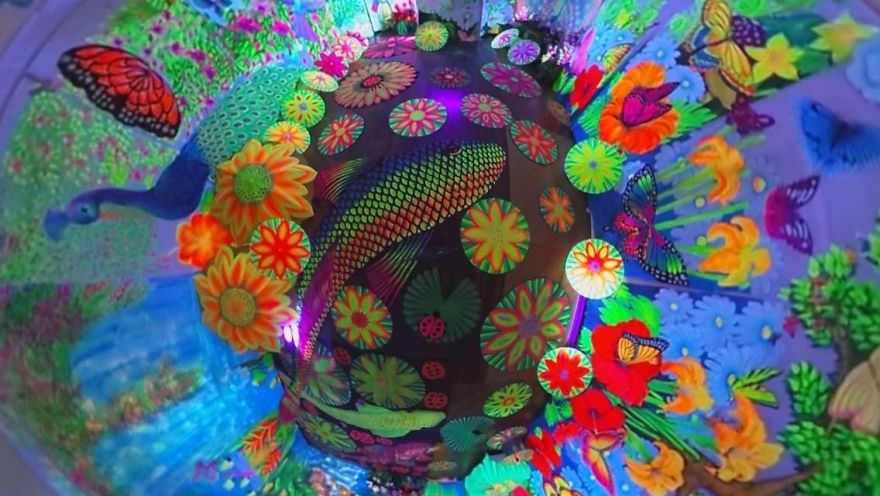 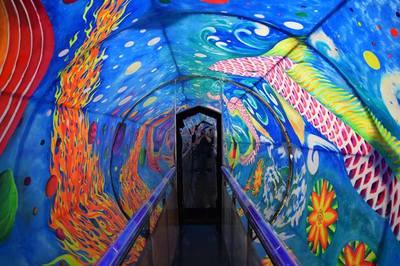