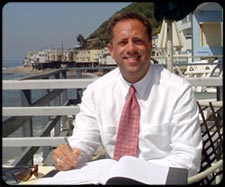 Today we’d like to introduce you to David Leopold Lyons.

David Leopold, can you briefly walk us through your story – how you started and how you got to where you are today.
I started designing outdoor movie systems shortly after my cinema in Malibu was burned by an adjacent fire at the beauty salon. I based much of my concept from a recent trip to Maui where I volunteered to assist the inaugural Maui Film Festival, now one of the best festivals in the world today.

From the first flicker outdoors under the starry night, I was overpowered and knew I had to bring this cinematic magic back to Malibu, home to studio executives, A-list actors, Academy Award-Winning Directors, Writers and Composers etc.

In 2006, I launched CineMalibu, outdoor movies on the cliff at Bluff’s Park directly across from Pepperdine University. At that time, Hurricane Katrina slammed into New Orleans flooding the city and wreaking havoc. My first outdoor movie turned into a fundraiser for the Red Cross. We showed “Inconvenient Truth” which had just come off a successful festival circuit and theatrical release and even had the producer, a Malibu resident introduce the film. Over $10,000 was raised in one impromptu screening! It is interesting to note that the CineMalibu program I created is still going strong bringing family friendly movies to the community outdoors with arguably the most beautiful view in LA.

Showing movies outdoors is nothing new however nearly every Drive-in Theatre across America has closed mainly because the real estate is better developed as a shopping mall, apartment complex, office buildings etc. No one lost the love of seeing a movie with friends under the stars so Pro Outdoor Movies simply leveraged that innate desire into a thriving business since 2006. “Every event I improve and the results keep getting more amazing every night,” say founder David Leopold Lyons. “As an executive in the theater industry and theater owner you never had the latitude to create a new cinematic experience like today. At that time, I was still projecting 35mm. Can you imagine trying to put together an event using film verses digital? Additionally, the studios frowned on anything creative which I understand as they do a great job marketing and distributing their films but to me the audience is always looking for more.

More is what they get at a Pro Outdoor Movie event. My motto is “Interesting Movies for Interesting People in Interesting Places” and that approach creates arguably the best movie experiences on the planet! Custom music, pre-show slides and videos, audience activations, related food and beverage, interesting hosts and actors. Consider the last two weeks of screenings:

“Carrie” shown to over 1,000 at the old zoo in Griffith Park with “Carrie” in attendance!
On the wall screening in Westwood Village, the mecca of movie-going in the 60’s, 70’s and 80’s. Boating movies at the marina, and LA LA Land projected all over LA LA Land as this season’s number one outdoor movie.

It was clear I needed to form a business since my theater would be dark for over a year with insurance claims and repairs. Today, Pro Outdoor Movies screens over 100 individual outdoor movie events including paid admission programs at some of the most interesting locations in LA. Just last week, I toured over a dozen new sites with my advertising partner and we never left downtown. Next week we cover Hollywood, West LA and Pasadena.

The studios have noticed. Currently working with Disney on a special movie event and recent successes have caught the attention of the studios. My client, Street Food Cinema recently hosted nearly 5,000 guests at the renovated LA Historic Park for the Blu Ray launch party for “LaLa”. I would like to see an indoor theater handle that turnout. None of this is surprising, however to Lyons. “We are in an age where the Internet is changing not only patterns but desires. I doubt the LA Times thought they could lose their store (classified ad section) to Craigslist or the taxi industry would have to compete with Uber and Lyft so what and how people choose to watch is changing. I don’t think young people go to the movies as first or even second choice like I did a kid growing up in LA. I am having success projecting alternative content which directly mirrors what they view on their smart phone. Common sense really, but I can pull it off in a few hours in this digital environment which is key.

Overall, has it been relatively smooth? If not, what were some of the struggles along the way?
Creating and sustaining a mobile projection company is hard work. I personally set up and operate nearly every show. I learned from Stan Durwood, founder of AMC Theatres that you have to been where the action is to keep competitive. Additionally, I had to design my own inflatable screens. At that time, the only product was coming from Germany which were overpriced and extremely heavy.

In terms of audio and video, nothing was specifically designed for outdoors. I had to really work on the sound as movies are mixed for the theater and not the beach! In terms of projection you cannot have enough brightness or lumens. I am not sure my competitors really know what a good image looks like. I have been shooting 5x the theater industry specification for illumination on cinema grade and 3D silver screen surfaces and the result is “jaw dropping,” Even kids today know 2k resolution and how an image looks in their living room these days by example. If you fall short of that standard outdoors you lose their attention.

I think the industry now struggles with mediocrity. Anyone can show a movie outdoors but can you improve the experience? To do that, a 25-year theater background and a quarter million dollars of the latest equipment definitely helps.

Please tell us about Pro Outdoor Movies.
Pro Outdoor Movies maintains the largest selection of inflatable movie screen and projection systems in the U.S. Every size up to 40′ wide for audiences in the thousands.

Pro Outdoor Movies specializes in image quality, affordability and unparalleled execution. The image on that scale is generally flat and would require projection systems that simply don’t pencil out. With my partner Optoma I am “double-stacking” and “triple stacking” projectors to achieve the correct look. I do not believe any company is doing this on a regular basis but it is crucial to maintain a well-received program that will grow each event. It is not uncommon for my clients to double their turnout event to event if they listen. “I know the formula having done nearly 1,000 event the past 11 years.” I now assist in every phase of the event including social media, pre-show editing, custom play lists, food trucks, sponsors, film programming etc. I am actively looking for production partners with interesting venues.

I am most proud that I was able to “re-create” myself and an industry all because of a few curveballs namely a theater fire in Malibu and then a decision to sell to a large theater chain as I was nearing the end of a long-term lease.

What sets me apart I think is passion. I just discovered in my mom’s attic a Variety new clipping that credited my grandfather as a founder of MGM studios. I always knew Grandpa was a player in the industry but never to that degree. He was hired by Marcus Loews as sole attorney to merge 3 studios in 1924 which he did dealing with egotistical and uneducated entrepreneurs. 37 years later my grandfather Leopold Friedman retired as CEO of Loews Incorporated. Back then, MGM was completely vertical producing and exhibiting their films until the famous Paramount decree to which my grandfather was a defendant fighting to keep the studio and theater businesses aligned. He was arguably one of the most important people in cinema and I am working to get his name on the Walk of Fame next year.

If you had to go back in time and start over, would you have done anything differently?
I under-estimated the demand for outdoor paid admission movie events. I have been doing them the past five years but wish I had started from the beginning. Sure, everyone knew about those amazing outdoor movies at the cemetery in Hollywood but that was the only option! Hats off to them for starting a boutique industry and different way to watch movies. Now the consumer has many choices and yes, the cemetery movies keep getting better. I had the pleasure of working with them last year at Barnsdall Art Park projecting alternative psychedelic film content.