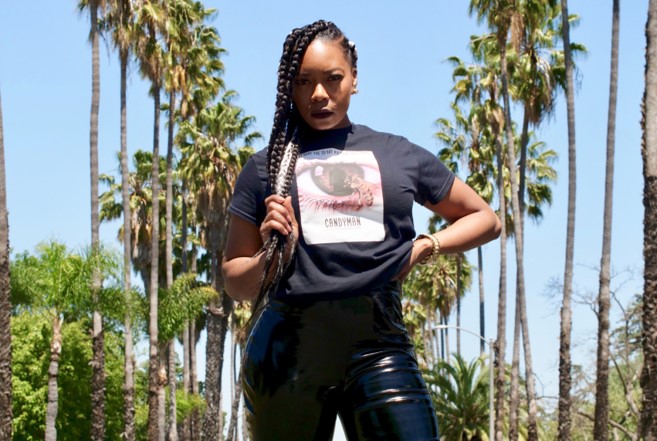 Today we’d like to introduce you to Britt Banks.

Britt, let’s start with your story. We’d love to hear how you got started and how the journey has been so far.
I’ve always been passionate about Performing Arts and Film. Growing up, however, accessing a stage was easier than a camera, so I attended the Amazing Grace Conservatory under the direction of Wendy Raquel Robinson, was involved with the Long Beach Performing Arts Magnet, and attended The Actor’s Workshop. Still, acting was just a fun hobby and I never really pursued it seriously. In 2012, I endured a traumatic experience that prompted me to seek counseling. On the advice of my Therapist, I began to write. It was extremely cathartic for me. I wrote about that recent haunting experience.

Then, one day, I decided to write that same story with a different ending. Rewriting my story gave me so much power at that moment. I realized that I could just keep on writing and produce other powerful stories. I began teaching myself how to write for film and decided that I wanted a more hands-on experience in film so I shadowed any and every indie director on set that I could. in 2016 I completed my first short film. Now, four short films later, I am more focused on my style and genre which happens to be Horror.

Overall, has it been relatively smooth? If not, what were some of the struggles along the way?
In the industry, there aren’t a lot of Horror female directors. There, especially aren’t many Black female directors. The path for women of color is narrow when it comes to Horror, but I plan to help change that. Another struggle along the way has been funding. I recently ran a Kickstarter to help with the costs of producing my newest project, Ronald, a Black-Horror series. Luckily, my Kickstarter was successful. Even with the funds that were raised, I still contributed a couple thousand of my own money. Before my campaign for Ronald, I’ve had to self-fund everything that I do when it relates to film. Thankfully I always have a job so I’m able to work, save, deplete funds on film projects, and start all over again.

Alright – so let’s talk business. Tell us about Britt Banks Productions – what should we know?
I created Britt Banks Productions in 2016. My only goal was to be able to film personal projects. I write and direct and have been fortunate to meet my producer Richard Haywood. He is literally the only real teammate I have and together we run my productions. I am most proud that I’ve been able to pay everyone involved in my productions. I understand that a lot of people in the industry at the independent level are working for free and asking others to work for them for free but I didn’t want that to be apart of my story. We all got bills to pay.

Any shoutouts? Who else deserves credit in this story – who has played a meaningful role?
I depend heavily on my producer Richard Haywood. He’s really good at what he does. I can depend on him for casting, producing, and set design. There is a small Los Angeles based production company called The Collective that I absolutely love working with. I learn a lot from those guys and I’m thankful that I made a connection with them. Outside of the production side, my family and friends are a huge support and I have no idea how I would keep going without them.