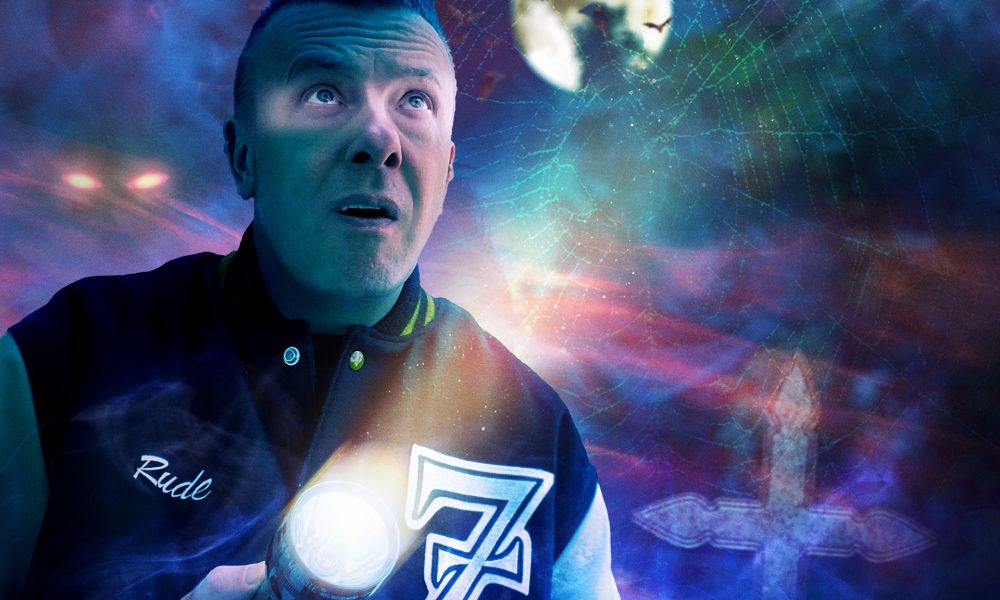 Today we’d like to introduce you to Bill Rude.

Bill, let’s start with your story. We’d love to hear how you got started and how the journey has been so far.
Like everyone’s story, there are a lot of twists, turns, plants and payoffs! When I was about 12 years old, I knew I wanted to become a filmmaker. It was inspired by my love of telling stories, but without access to a video camera like most aspiring film nerds had, I would doodle monsters and fantasy art scenarios to ideally make into movies one day. By high school, around 1990 or so, I came up with the name ‘7 Hells’ with the intent to have some of these doodles made into skateboard stickers, but that amounted to little more than the occasional logo for one of the high school heavy metal bands.

The interest in drawing helped me get a scholarship to the Minneapolis College of Art + Design, where I followed my dream to study film. And hence stopped drawing almost completely after my first year of fine art requirements were finished. From there, it was a virtual slalom course to try to find a creative role in the film industry. The first trial I had to pass was quitting a very good job I got right out of school as the webmaster of a newspaper. It fell into my lap because my personal homepage made it into Wired magazine, and in the era of the 1996 Internet, that made me an expert in the field!

My escape was moving to New York City for a couple of years. It was a great crash course in the world of independent filmmaking, but very stressful, so I ended up sidelining my position working on set in Locations and becoming a motion graphics designer at MTV Networks, specifically working for VH1. It soon dawned on me that I was back in the same cushy boat I was in as being a webmaster and needed to get out of another career level job. That happened in the form of a surprise acceptance packet to the USC Graduate Film Program, which I literally forgot I had applied to. One month later, I was living in LA.

USC was a great experience overall. I made some movies, made some connections, and it helped firmly plant me in the entertainment industry. The natural default was to start doing motion graphics again, so from a bird’s eye view, it appeared like a lateral move from New York City, but because of my reputation, I was immediately able to pivot to and from a variety of creative projects on my own terms, and that is still my day job today.

What is your Day Job these days?
This includes making title sequences for movies and TV shows, second unit directing, directing music videos, coordinating visual and special effects, art directing materials for a Pinball Machine company, and even designing t-shirts for movies and TV Shows, such as ‘Milk’ (2008 Academy Award Nomination for Best Costume Design; Danny Glicker). Eventually, though, I was still eager to do more of my own thing, specifically to tell stories (because what we all really want to do is write and direct!) Like every other aspiring filmmaker in Los Angeles, my saga is dotted with missed opportunities and close calls: Being signed to a multi-picture deal with a small production company that went out of business—having agents waiting outside of screenings at film festivals that eventually led to nothing. Been in meetings with movers and shakers and promises of glory but again, this industry is about being one among thousands, so you just have to appreciate the opportunity and the occasional pat on the back and keep moving forward. That is essentially how I rediscovered drawing.

What was that first inspiration?
It started when I got my first HD TV. When it was turned off, it looked like a giant black obelisk in my little living room, so it seemed like a good idea to try to make it look more like a living picture frame or something when it wasn’t being used. Ideally, those pictures would be of old 1950s B-movie posters to match the decor of the rest of the room, but I didn’t know of any imagery to use with high enough resolution. So at the age of 35, I decided to teach myself how to paint, to create my own. The video wallpaper was never made, but now I’m probably better known for my retro horror art than anything else I’ve ever done. And fittingly, I resurrected my old monicker from high school of ‘7 Hells’, to properly represent that body of work.

Great, so let’s dig a little deeper into the story – has it been an easy path overall and if not, what were the challenges you’ve had to overcome?
Nothing worth its time is ever smooth, but perceived obstacles vary from person to person. My significant obstacles were mostly about temptation: locking into a comfortable position and finding the confidence to abandon it. Luckily for me most of that happened when I was young and still had that fearless naiveté that something else would come from around the corner at any moment.

Years later, the temptation of comfort is probably still the biggest obstacle, but it’s now got heightened responsibilities that don’t allow for just quitting everything to move across the country. It’s a slower chess game of moves that incrementally get you closer to the final objective of clearing the board of threats.

We’d love to hear more about your work.
7 Hells is the label used to represent my original horror artwork and intellectual property. It is fine art created for art galleries, reproductions for collectors, collaborations with licensors, and an outlet for evangelizing the history of horror and genre in popular culture through books and lectures. As a company, it consists of two people: Myself and my wife, Colette Rude. Colette runs the day-to-day operations of bookings, sourcing, licensing and managing schedules. She was an HR executive for over 20 years before taking over 7 Hells full-time, so the greatest benefit to 7 Hells is her interest and ability to communicate with people. There is a lot of that at gallery openings and convention appearances, so having someone as smart and as personable as she is is paramount to building and maintaining the fan base we have.

What 7 Hells is not is illustration or working for hire. I’ve got a day job for that! It sounds contradictory since we actively participate in merchandising, collaborations, and commissions, as well as my work being obviously influenced by mid-century horror illustrators. The difference is that, as art, it is not done on-demand, so there is no back and forth. If I’m asked to do an original piece for any reason, it starts and ends with: this is the idea I’m inspired to do. If the person requesting it doesn’t like the idea, I walk and no hard feelings. Again, I’ve got a day job where I’m creating for other people. 7 Hells is about being creative for myself and if the rest of the world happens to like it too, all the better. Luckily for me, this genre is very easy to like!

My personal definition of horror is “Anything unfamiliar that exists with confidence”. It is intentionally broad and includes not only the obvious monster or haunted house but also concepts like teenagers behaving recklessly or a strong woman winking in a swimsuit. To some, that sort of confidence is unfamiliar and horrifying! Adding spiderwebs to anything also helps lock it in.

The focus on all of the artwork is storytelling and using nostalgia to strike an emotional chord that inspires a viewer to want to get lost in the worlds being built. The most significant 7 Hells work is probably the ‘False History’ series. It’s all original work that creates authentic-looking b-movie posters and pulp novel covers that never existed. Each has subtle connections that span painting to painting to prints to merchandise and one of a kind creations. Not only does this interconnectedness create a wonderfully curated nostalgic world, but it also gives an individual the rare opportunity to take a piece home with them from an art gallery. If a $10,000 painting is out of your budget, then grab a $25 t-shirt that is directly connected, with no less thought put into it. Some people become quite emotional when they discover the interconnectedness of the work. Idealized nostalgia is a powerful thing.

The other facets of the 7 Hells body of work are Tribute Art and Fairy Tales. Both of those are my own horrific interpretations of folklore, old movies, and of course, the So-Cal cultural staple of Disneyland! A wonderful moment had Disney request to project my Hatbox Ghost painting 30ft tall on a wall in the Hollywood Forever Cemetery for FreeForm’s 2019 ’31 Nights of Halloween’ special, as well as interview my wife and I as ‘Haunted Mansion Super Fans’. The Fairy Tales, in particular, have grown into the core merchandising arm of 7 Hells. It started with some drawings done in a classically illustrated style, then one year I did holiday cards, and nothing was ever the same.

Krampus Holiday cards, based on the legend of the Scandinavian Christmas Demon, sold quite well and a number of stores around Los Angeles were carrying them. As the story goes, one year I was dropping an order off at Meltdown Comics (RIP) on Sunset Blvd, and the manager, Francisco, and I were laughing about how someone should start appearing around town as Krampus so people had another option to taking their kids to the Mall to get photos taken with Santa. Two weeks later, I had pulled together a complete costume and had a handful of appearances booked around town. It was so popular that Dark Delicacies (horror bookstore in Burbank) had me come back to sign Krampus headshots! Sitting at a table like William Shatner at a Star Trek convention. It was bonkers!

Since then, the 7 Hells Krampus has become a minor celebrity in the horror scene. He’s appeared everywhere from concerts, night clubs, comedy shows (warning Krampus does not know improv), book stores, art galleries, restaurants, and lots of conventions. He’s the official Krampus of the Anaheim Halloween Parade and has even been featured on the local LA News on Christmas. and I think it’s just the beginning for him.

The latest 7 Hells endeavors deal with a lot more writing and associated lecturing. Since the authenticity of the work requires so much research, I’ve been working on a couple of books. At the same time, people come to me for info on various topics, so I began doing appearances and speaking engagements, which I really enjoy since at the core, this history is what inspires my work. It’s a great privilege to be able to evangelize these dark corners of culture.

The fun back-and-forth usually happens on various podcasts or sit-downs, but having the time to bring in a visual presentation as a lecture can turn it into a much more entertaining experience. In a sort of catalyst for all that is 7 Hells, I’ve also launched a new YouTube channel, with behind the scenes peeks and entertaining spots.

Do you look back particularly fondly on any memories from childhood?
Cruising the neighborhood with my friends on our bikes and being completely off the grid until it was time to go back home for dinner 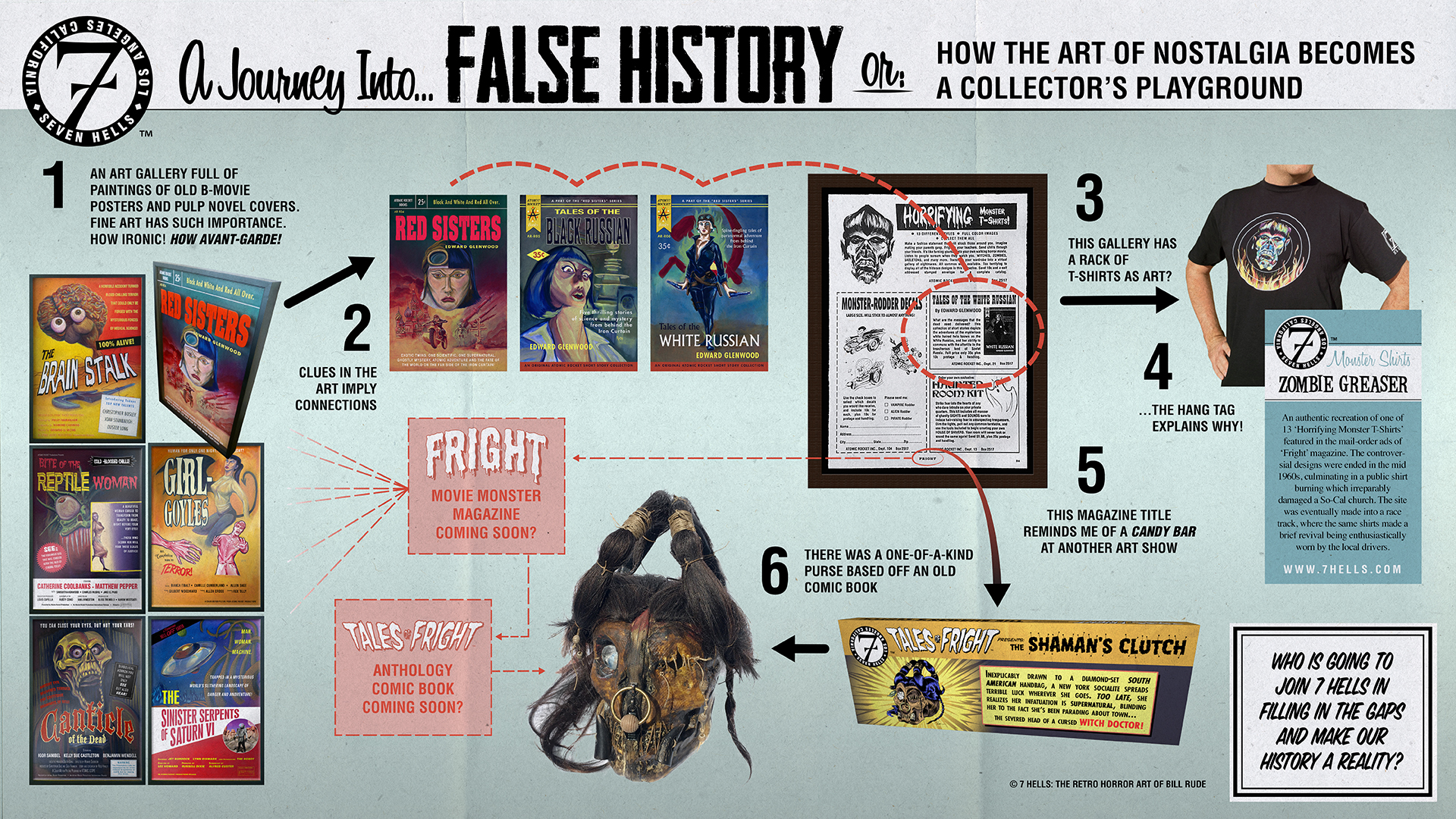 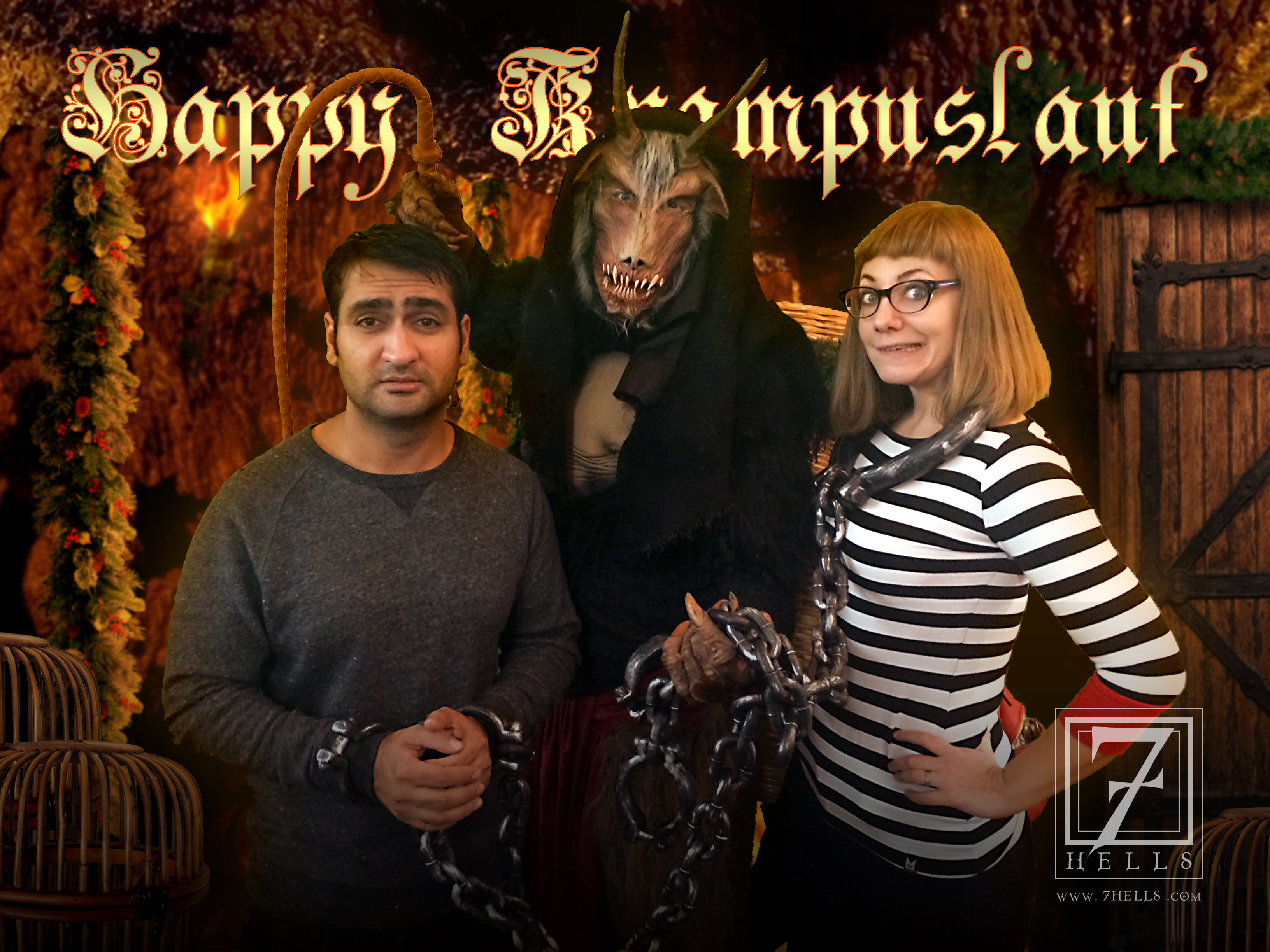 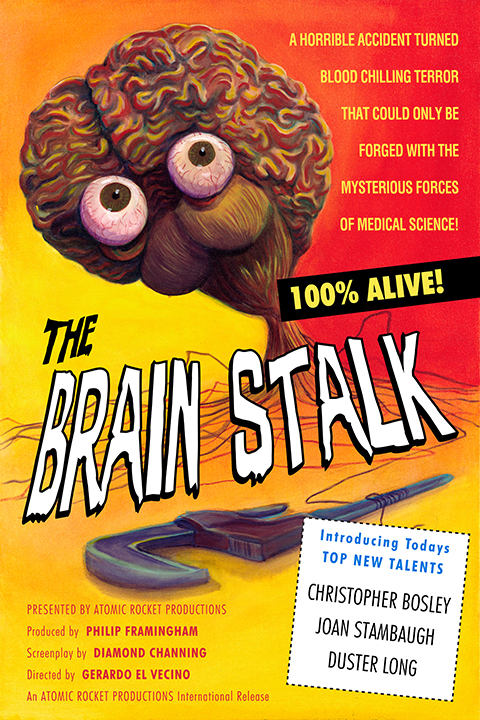 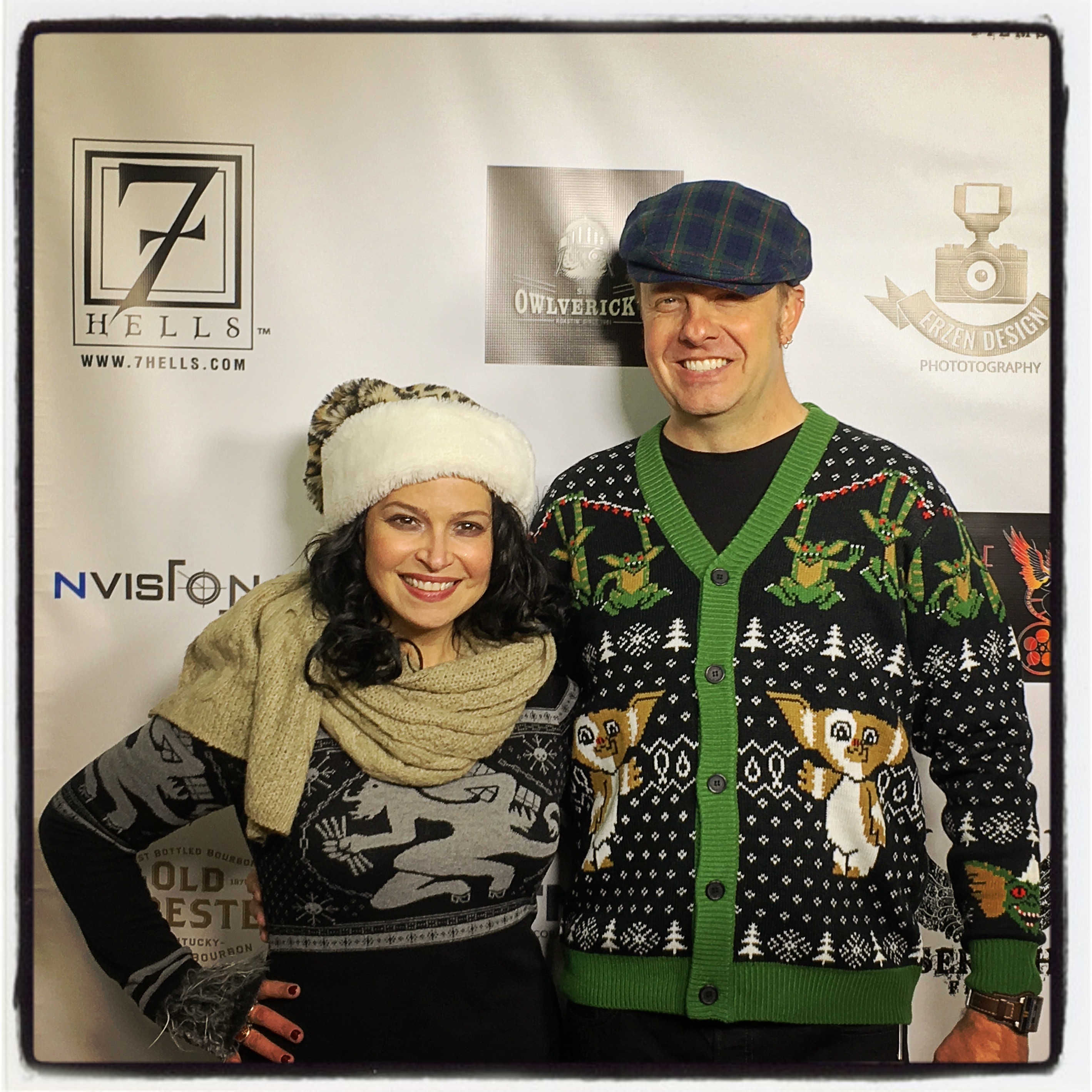 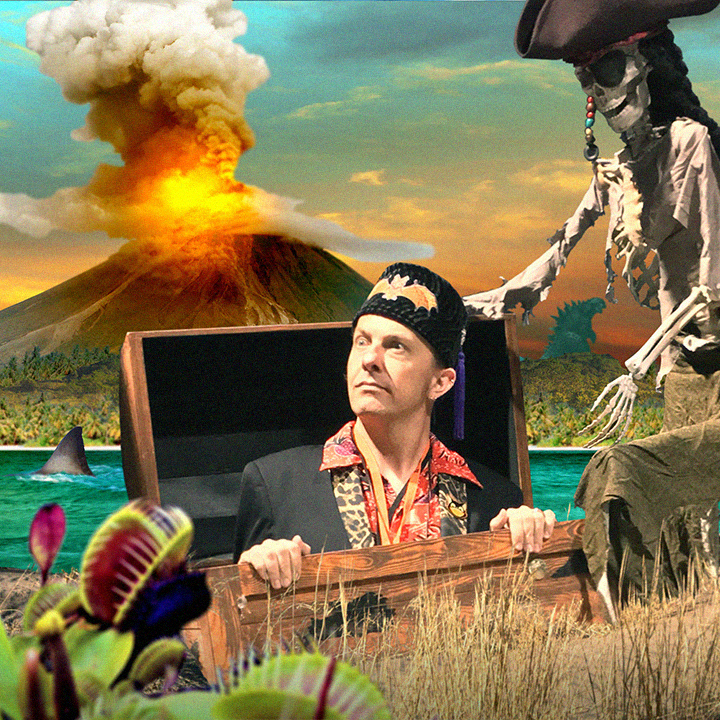