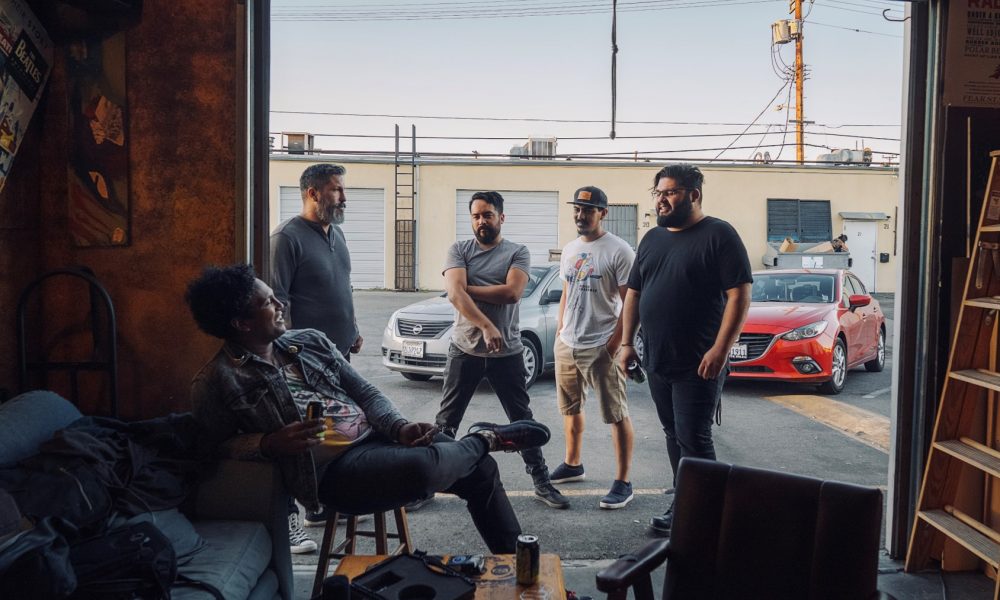 Today we’d like to introduce you to Andy Rayner.

Andy, can you briefly walk us through your story – how you started and how you got to where you are today.
Jellyhead Collective has been an idea for about a decade. It was always about linking up with fellow artists and having a large group of friends with different skill sets that would help each other to get the recognition we all felt we deserved. But in the last two years, everything sort of changed.

Ten years ago, it was the typical early twenty-something dream to be an artist and gain some sort of recognition and live off of our art or whatever. Once we hit 30, we’d already lived an entire life of financial struggle, depression, bad choices, quitting and starting over, wondering why and how, being angry at ourselves and the world, with some pretty solid happy moments sprinkled in between. 4 out of 6 members of Jellyhead Collective are in the band Porcelain Pale. The band has been around for about five years now, and we do well when we’re heard but getting heard has always been one of our greatest struggles.

My girlfriend Jess and I had all of these ideas to finally start the collective and try to do as much as possible through collaboration and cross-promotion that would ultimately help the band find it’s audience while also promoting our friends’ creative endeavors. We planned things out and did a few test shots for some promotional content, but there was so much we couldn’t do on our own, and we felt that the mission statement was kind of selfish. At this point in our lives, we were kind of forced to look at what it was that we wanted in life and what we considered “success” and why we didn’t have it even though we were working so hard for it. We realized that we had to redefine success in a way that left out fame and fortune and focused more on us just being happy.

Since I met Maxx, he’d been toying with the idea of doing a podcast because we’re both kind of aspiring comedians and we never shut the hell up. We decided that it’d be cool to get all the artists we’d made friends with over the years and some we didn’t know, to talk about their lives and possibly give us new insights into why we keep doing what we do and hopefully inspire anyone listening to continue as well. When I brought it up to the band, they thought it was a great idea, and they all got involved, then I told my best friend, Martin(who’d recently come back into my life) and he jumped at the opportunity to do something fun, creative and meaningful. We got right to work, and we all wear multiple hats since there’s so few of us.

Martin, PJ and I run the video stuff, Adrian and PJ are certified Audio Engineers, so that’s their realm, Maxx has more friends than any of us put together and one of the greatest senses of humor you’ll ever come across, so ideas between he and I are never in short supply; Jess is an amazing writer and her ideas, and business sense is off the charts amazing, so we had everything we needed to get going. As soon as we reached out to our friends they were all about it. They liked the idea that we were going to be completely transparent about what we go through and that we didn’t see what we did as a popularity contest, it’s just for the absolute love of what we all do.

While doing all of this a friend of ours, Edgar Ruiz of the band Mind Monogram, was going through some tough times with his family. His mother was deported because of a stupid mistake that our “great” Government made, and his family was seeing hard financial times on top of it (the full story can be heard on our podcast). We had a date lined up to put together a show at DBA256 in Pomona, but we were going to cancel it because we honestly felt unprepared. Once we heard about Edgar’s situation, we knew we wanted to do something to help him but had no idea what. We decided to keep the date and throw a benefit show to raise money for his family.

Through that, we hit up some other friends’ bands who jumped right in without hesitation saying “we love our boy” and offering amazing support. Then Janette Ayub of Girl Underground Music Blog got involved and got The Young Center for Immigrant Children’s rights involved, along with Heartmind Radio and some other amazing artists, and before we knew it, we had a real show on our hands with a really solid purpose. The night was a major success. We had auctions, raffles, amazing visuals, amazing bands, the venue was incredibly supportive, Maxx and I MC’d the night, everyone had a blast, and we got to help Edgar’s family, we paid for him to get a passport to be able to visit his mother, we helped raise money for kids being separated from their families and we found our purpose.

Since then, we’ve decided that every event we throw will raise money for a good cause because we want to show the world how important art can be and how much of an impact it can make. I had no idea where we were going until Edgar told me about how he was pretty much the only artist in his family and how before this entire event happened, his family didn’t really get it or understand how it could be beneficial to him, but after seeing the effort that everyone put into that show and the cause that they understood it a little better and they understood his love for it a little more.

As artists, we’re constantly fighting for approval, whether it’s within ourselves or our local scenes, or our families. The fact that we bore witness to strength in numbers make even the smallest difference meant the world to us, and now we know where we’re going.

We’re always bombarded by how great it is to pursue your passion, etc. – but we’ve spoken with enough people to know that it’s not always easy. Overall, would you say things have been easy for you?
Everything is hard. Always. Everyone has a life, and I don’t just mean they have a job and a busy schedule. I mean we all have a life, complete with the random “fuck you’s” the universe likes to throw in your face when you need it the least. Maxx was in a life-threatening car accident earlier this year which left him without transportation, some debt, and an amazing scar on his left arm. We all live kind of far from each other so him being without a car is tough to constantly get together, but he still makes it happen when he can.

PJ is a father, a veteran and a student at Musician’s Institute, so imagine how hard that guy works at life. Adrian is hustling and selling his body for food… just kidding, but he’s working part-time and hustling with starting his own business at the moment. I work full time and am getting over addiction issues and still trying to grasp the concept of being a responsible, independent adult. Jess works full time and is trying to get passed some health issues. Martin works full time and currently sleeps on my couch, so he has to deal with me all the time… he may have it worse than all of us.

That’s the thing about being in your 30’s and trying to do something big, you can only give so much time, luckily none of us sleep very well, and we love it enough to put in as much as possible. Sometimes we ask a lot of ourselves but having each other’s support makes it easier.

We’d love to hear more about what you do.
We’re a multimedia art collective showcasing music, technology, film and personal experiences of various underground artists. We have a podcast; we make short films, we’ve produced two feature-length films that are currently in distribution negotiations.

We’re going to start releasing live music sessions featuring local artists. We have a blog coming soon, music gear tutorials, live music events for charity, all that good stuff. I don’t know that we really “specialize” in any one thing in particular. Everyone in the group is multi-talented, so we’re kind of all across the board and try not to limit ourselves.

I think we’re kind of known for being very honest and not always in a best-received way, but we’re honest. I’m definitely most proud of the fact that we’re helping people as much as we can when we can just by doing things we love.

The idea that something we found joy in creating can bring joy to anyone else is amazing. I don’t know what sets us apart. Things like this exist elsewhere I’m sure, and people like us are out there doing it, we’re just doing it our way… whatever that means.

What were you like growing up?
I was uhm… I was an angry kid. Bullied a lot so I fought a lot, had a big mouth, spoke fluent sarcasm before I knew English. I watched a lot of movies, became obsessed with movies. Had a cool Uncle who showed me some cool music and gave me his old electric guitar, which was the first thing I ever had that chilled me out. My childhood isn’t the happiest story. Most of my adult life is me trying not to be what I came from. 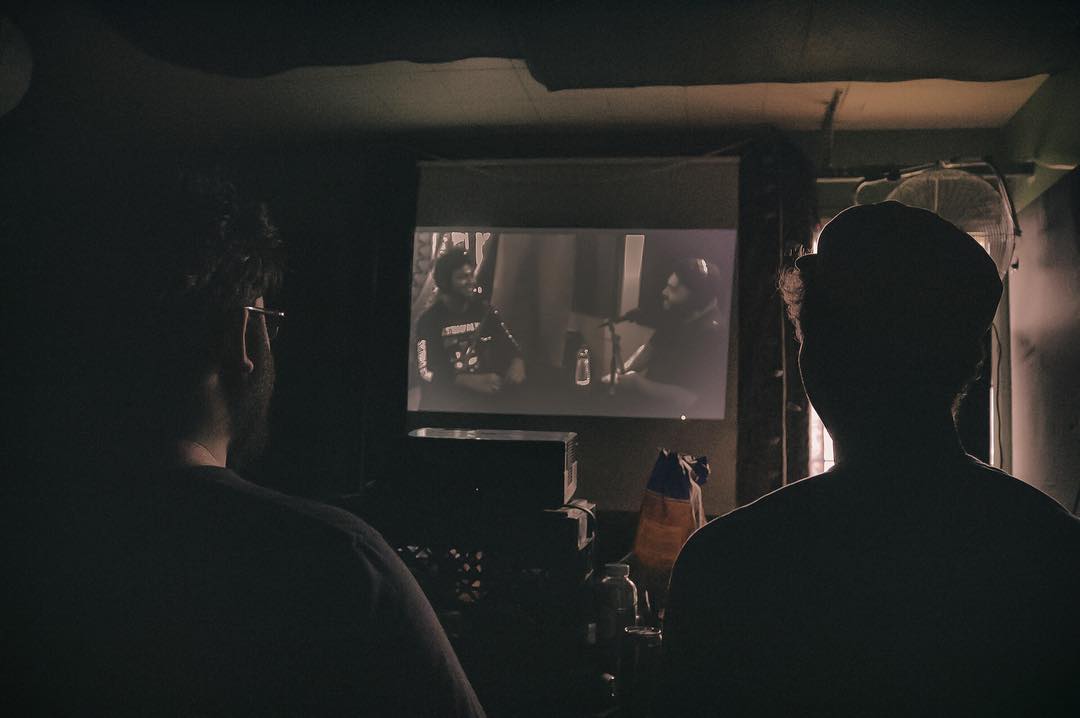 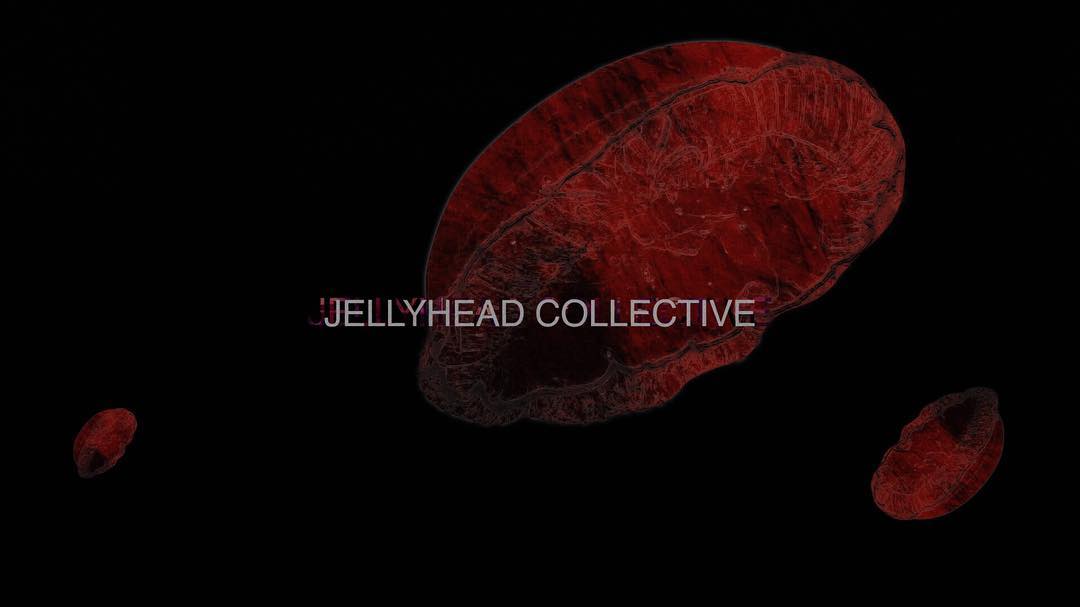 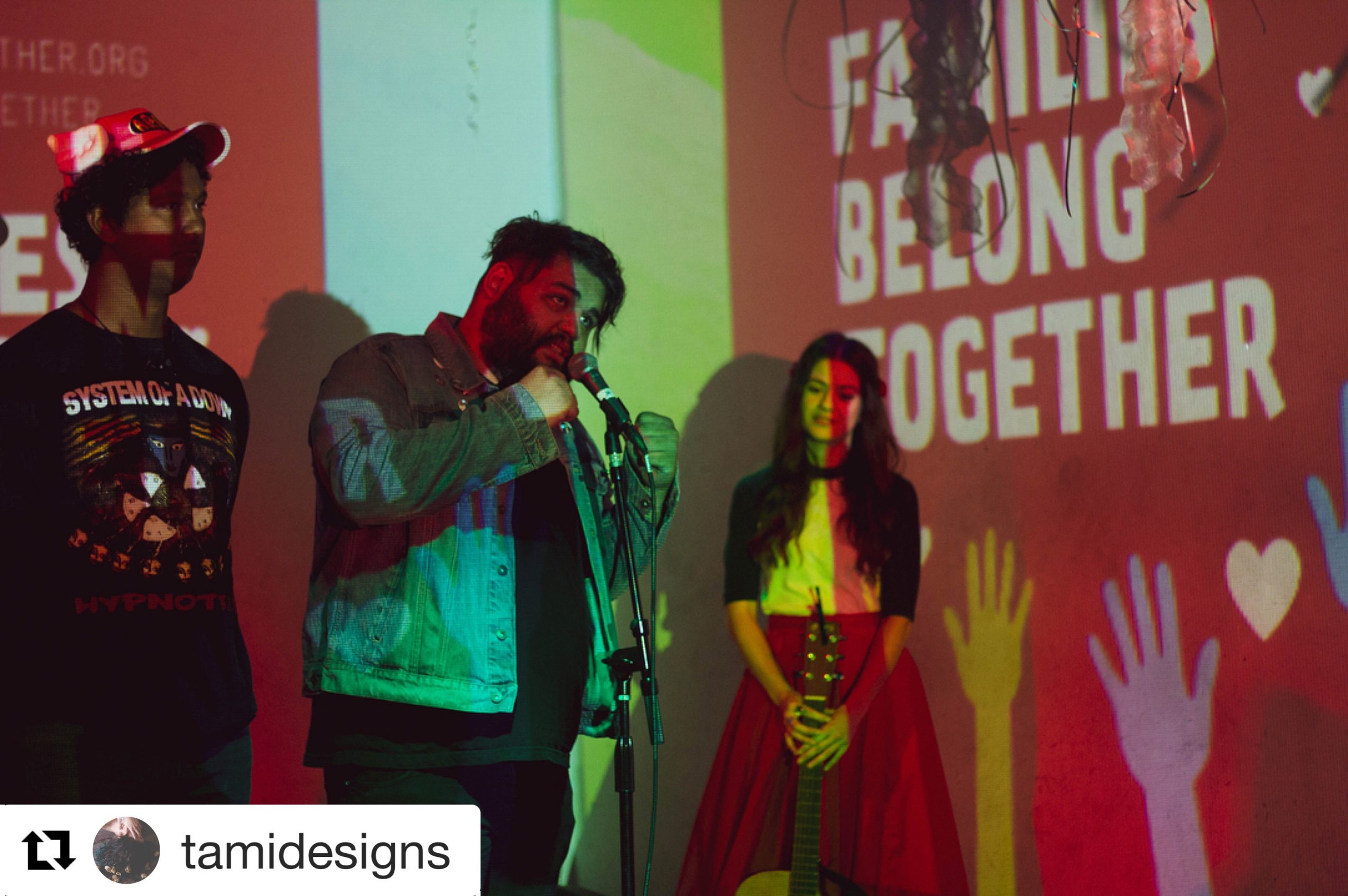 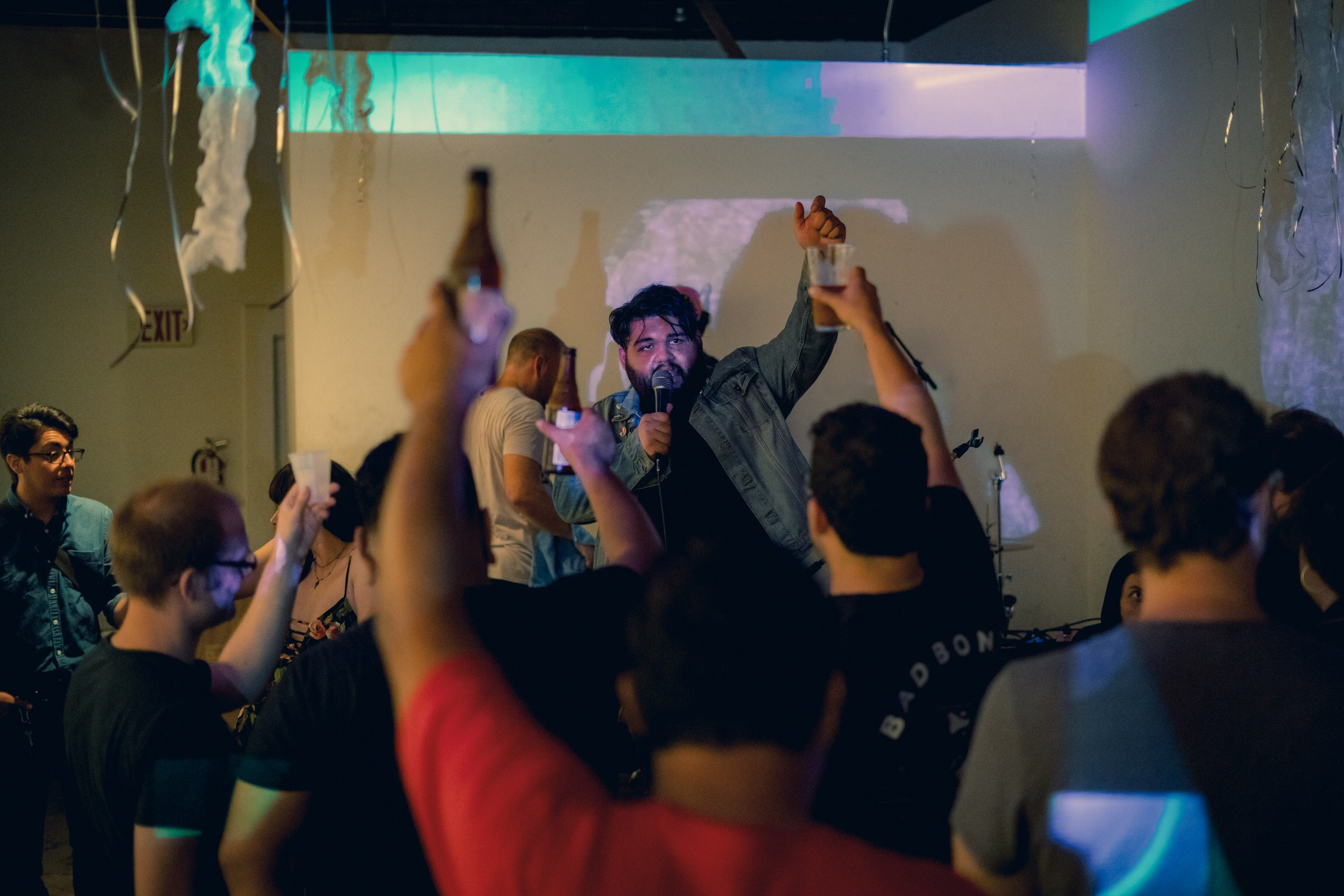 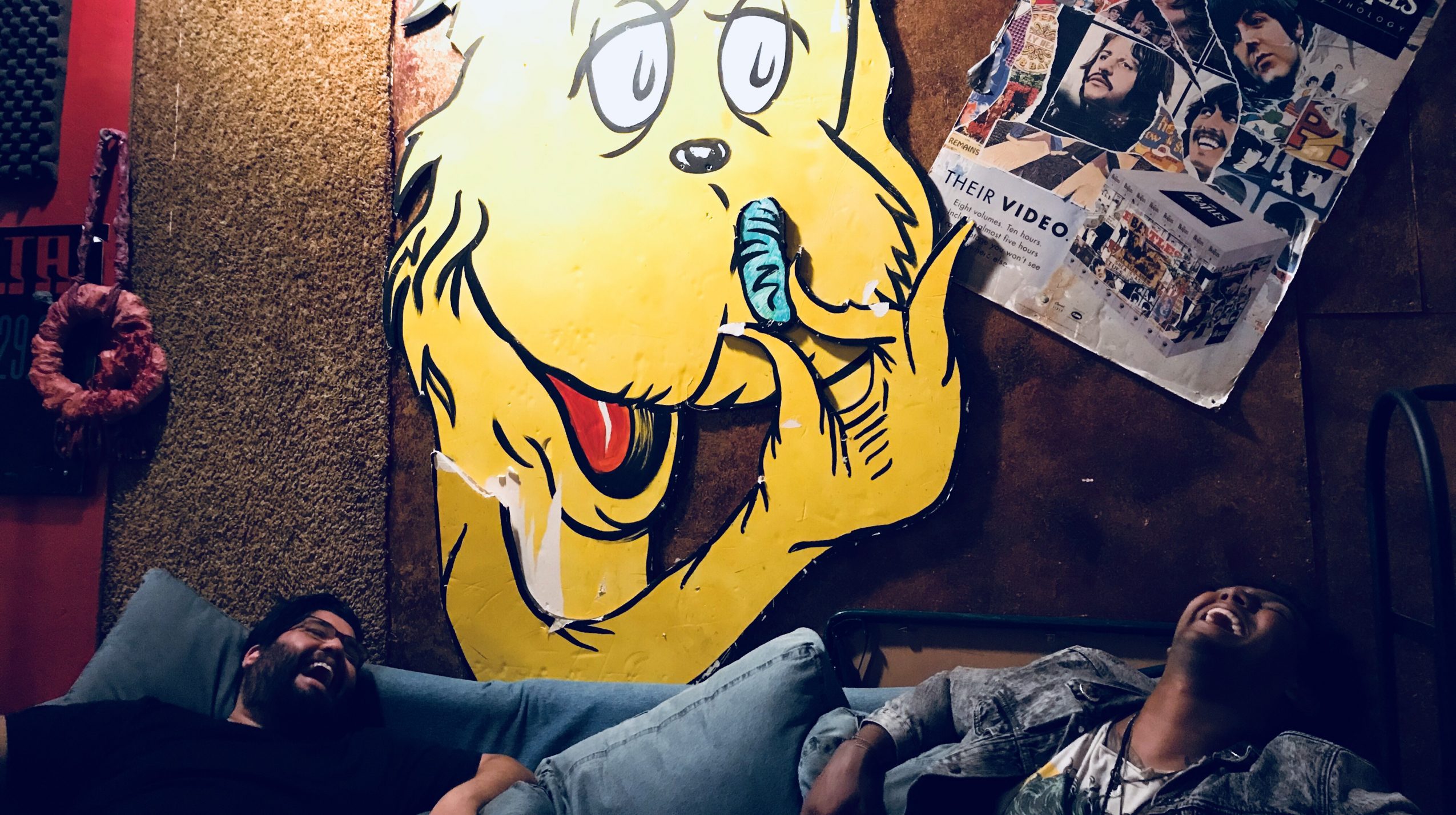