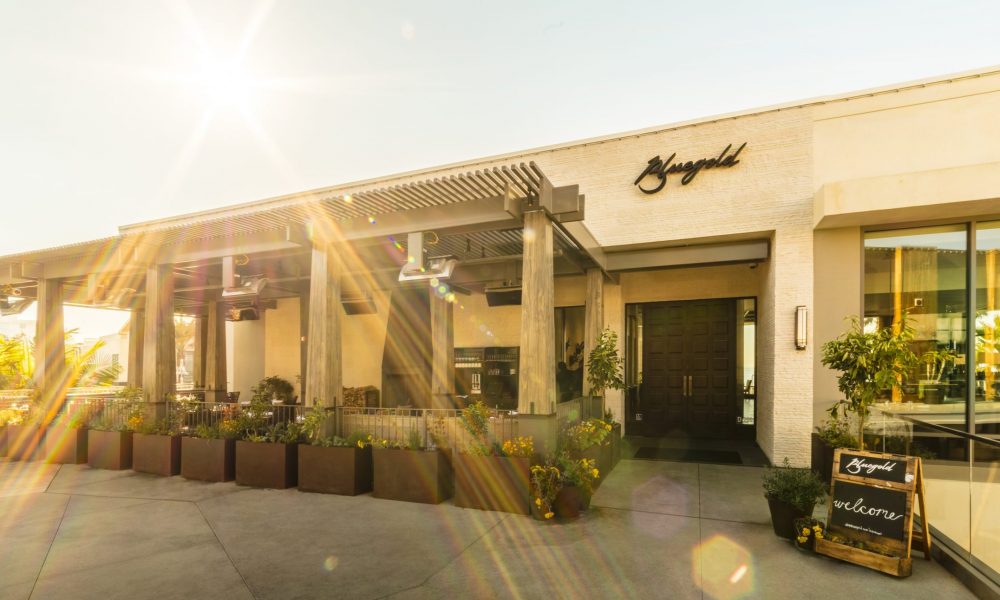 Today we’d like to introduce you to Huntington Beach’s Bluegold.

What’s the Bluegold story? The who/what/when/where/why?
(LOS ANGELES, CA) —CEO Jed Sanford and Chef/COO Tin Vuong of Blackhouse Hospitality debut their flagship O.C.-based dining destination, Bluegold, in addition to their first restaurant-within-a-restaurant concept, LSXO, both situated at Pacific City in Huntington Beach, CA. As the group’s ninth project in less than five years, the 8,800 square foot space is Blackhouse’s largest multi-dimensional dining concept to date. A modern interpretation of the classic California coastal eatery, Bluegold invites guests to relax and take in the sunset from one of 235 seats offering unobstructed views of the Pacific.

“Expanding to Orange County presented a natural progression for us as we grow our operation,” says Sanford. “Tin began his culinary career at the Monarch Beach Resort and Sapphire Laguna and has a strong affinity for the community. We were intrigued by the opportunity to create an anchor restaurant for Huntington Beach and thought long and hard about what the space should be—with every new restaurant, we look out for which type of cuisine is under-served in the area. We want it to feel honest to the site and drew inspiration from the indigenous, self-supporting California missions that grew their produce on the land and baked their own bread.”

About Bluegold
Bluegold celebrates Southern California’s land, from citrus groves to the rocky coast, with a renewal of the coastal California eatery (Bluegold’s name was inspired by the point where the sunset hits the ocean on the horizon). With Bluegold, the Blackhouse team seeks to take farm-to-table back to its roots; to a time where leisure met cuisine and culture was drawn from the earth and sea. From fresh oysters in the steam kettle to a savory steak grilled over charcoal, Bluegold reimagines the seaside dining experience.

“The menu is influenced by Old World Spanish and Californian flavors, but with a global approach,” says Vuong. “We’re also applying every culinary technique we learned and mastered at each of our other restaurants. So consequently, our kitchen is decked out with a hot bar, raw bar, as well as wood and charcoal grills.” A sampling of menu items—from breakfast, brunch, lunch, and dinner—include:

In speaking with any restaurateurs I’ve come to learn that the restaurant business can be brutal. How has it been for you? What’s been the hardest part?
This emphasis on fostering a collaborative environment stems partly from Vuong’s childhood. Born in California to a Chinese family who fled Vietnam during the fall of Saigon, Vuong witnessed his relatives each working multiple jobs to support themselves within the U.S. They would often all eat together at the end of a long day, choosing to dine out in Monterey Park around 11p.m. Years later, after Vuong completed his bachelor’s degree in economics at UCLA, he decided to channel his business skills with his passion for food by enrolling in the California Academy of Culinary Arts in San Francisco. Shortly after graduating, he became the executive sous chef at the St. Regis Hotel and Resort in
Monarch Beach, CA, where he ultimately earned the responsibility of overseeing eight chefs and four restaurants. In 2012, he moved on from his position as director of culinary operations at Sapphire in Laguna Beach to become the executive chef of Abigaile in Hermosa Beach. Since that time, he has become the chief operator and chef- partner of Blackhouse Hospitality Group, guiding the inventive menus and innovative experiences of two Little Sister restaurants in Manhattan Beach and Downtown Los Angeles (which showcase the rich collisions of food and culture borne out of the European colonization of Southeast Asia and has garnered significant praise from notable food critics including Pulitzer Prize-winning writer Jonathan Gold who named it one of his “101 Best Restaurants” in 2014 and 2015), Wildcraft in Culver City, Día de Campo in Hermosa Beach, and Steak & Whisky in Hermosa Beach.

What we love about independent, non-chain restaurants is that the independents bring new ideas forward. What’s interesting or unique about Bluegold
Behind an unmarked door adjacent to the wine room, guests are transported to District 1 (China Town) in Saigon via Blackhouse’s 28-seat restaurant-within-a-restaurant, LSXO. A spinoff of the Little Sister brand (Manhattan Beach and Downtown Angeles), LSXO is love letter to the culture, heritage, and lineage of Vietnam (Vuong’s relatives hail from the region). While Little Sister is known for its French Vietnamese menu, LSXO follows the same Southeast Asian inspiration with a more refined, expat feel.

“There is no signage for LSXO—you can spot the entrance of it tucked into a section inside Bluegold, but you’ll have to know it’s there. While Bluegold is light, bright, and airy, LSXO is its darker, edgier little sister, ” says Vuong. “Both restaurants operate out of the same kitchen, though the menus are completely different. LSXO offers straight-up, honest, home-style Vietnamese cuisine—the type of food I grew up eating with my grandparents in the San Gabriel Valley.”

Pan Roasted Seabass
jamon, charred escarole, salsa vera cruzParking Advice:
We validate for 2 hours – please park in Area A at the structure attached to our building.