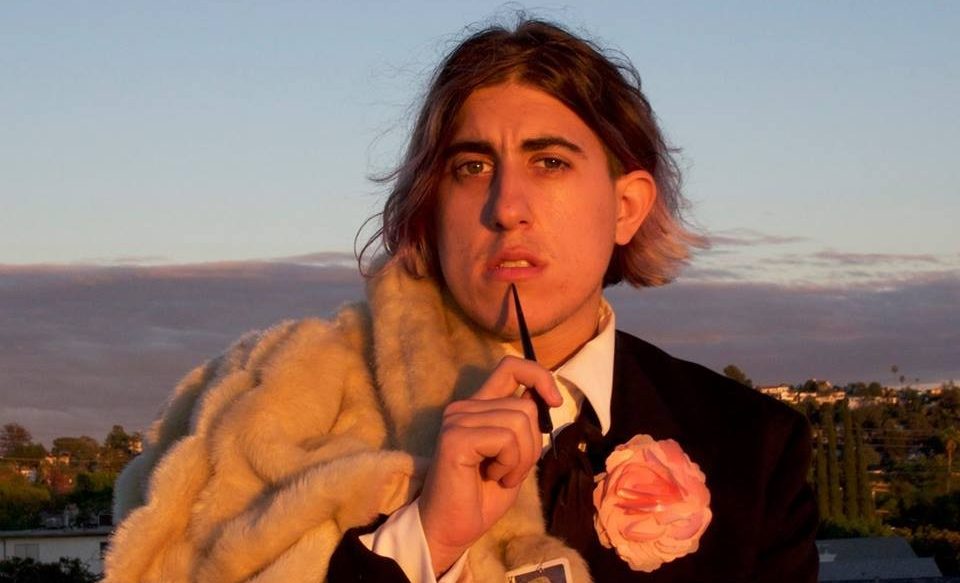 Today we’d like to introduce you to Van Jazmin.

Van, we appreciate you taking the time to share your story with us today. Where does your story begin?
I started freelancing at age 15 doing murals and promo art for bands in Florida. In 2013, I graduated from the Ringling College of Art and Design with a BA in Illustration and Business of Art. After college, I struggled to find a job and ended up teaching myself graphic design and designing for real estate clients. The freelance available in my small town was limited to say the least, so I also worked at an art gallery. My life changed when this kid came into the gallery and showed me a music video by RiFF RAFF. He struck me as exotic and colorful. Meanwhile, my life was becoming more drab and straight-laced as I considered a career at Sotheby’s. That went out the window when I got a call from NEFF, a popular clothing company. They wanted to fly me out to California for an in-house position and I was eager to go. When I got to Camarillo where the NEFF headquarters is located, I immediately put down a deposit on a room and planned to relocate.

However, I didn’t understand that my job was a temp position, so by the time I moved, I was jobless and confused, living in a trailer park across from a farm. By some stroke of luck, an employee from the company who happened to know RIFF RAFF reached out to me about designing his website. As it turns out, they were roommates and lived within 5 miles from me I started going over to RiFF RAFF’s house and designing his website and first clothing line from scratch. I was still star-struck, as I had only met him once at a concert, and now I was his lead artist. I quickly went from eating out of the dumpster to being on the payroll of an up and coming star. I contributed to his career during a critical time – when his first album, NEON iCON, dropped. I even tour managed for his first US tour. I resigned on good terms in 2015 and moved to Los Angeles. I then went on to design for and tour with other artists.

As part of the electronic scene as both branding designer and live sketch artist, I was noticed by the likes of Skrillex and Kill the Noise. My art at the time documented both the EDM world and the drag world and underground nightlife in Los Angeles in general. I continued on that path up until Covid-19 ushered in a new world without live entertainment. Since the pandemic began, I have been focused on finishing archival projects. I published my first art book “Hollywood Squares”, as well as my first literary book “A Great Recession”. I also completed a short film called “Hollywood Home Video” which captures a slice of life in Hollywood just prior to the lockdown. Despite the restrictions, I feel very thankful to be in Los Angeles at this time. I hope that my sketches from the past five years can help immortalize some of the parties, venues, and people that we’ve lost.

Can you talk to us a bit about the challenges and lessons you’ve learned along the way. Looking back would you say it’s been easy or smooth in retrospect?
Looking back, my main struggles were poverty and toxic personalities around me. It’s hard for anyone to adjust to living in a new place, and I had to do it without a job. I have attempted many times to look for gainful employment in my field, but the closest I’ve come is temp positions in agencies. I was lucky to get enough contract jobs to get by. At one point, I was sharing a bed with someone in a small room without a door, but at least the rent was only $400. I was also very ambitious in my twenties and wanted to continue my artistic endeavors at times when I couldn’t afford it. However, I don’t regret making the art that I made as it was probably key to my survival.

Thanks for sharing that. So, maybe next you can tell us a bit more about your work?
I am known for drawing with markers live at parties and during performances. What people may not know is that I also perform – I am a clown. I am most proud of myself for going on stage even though I never feel ready. What sets me apart from other artists may be that I have a strong business side, and I like to publish, curate, or produce works just as much as I like creating them.

Do you have any advice for those just starting out?
My advice for anyone starting out in Los Angeles is to try to locate yourself near public transportation and do not buy a car. Driving and parking in LA is truly a nightmare and a huge money hole if you aren’t driving as a job. 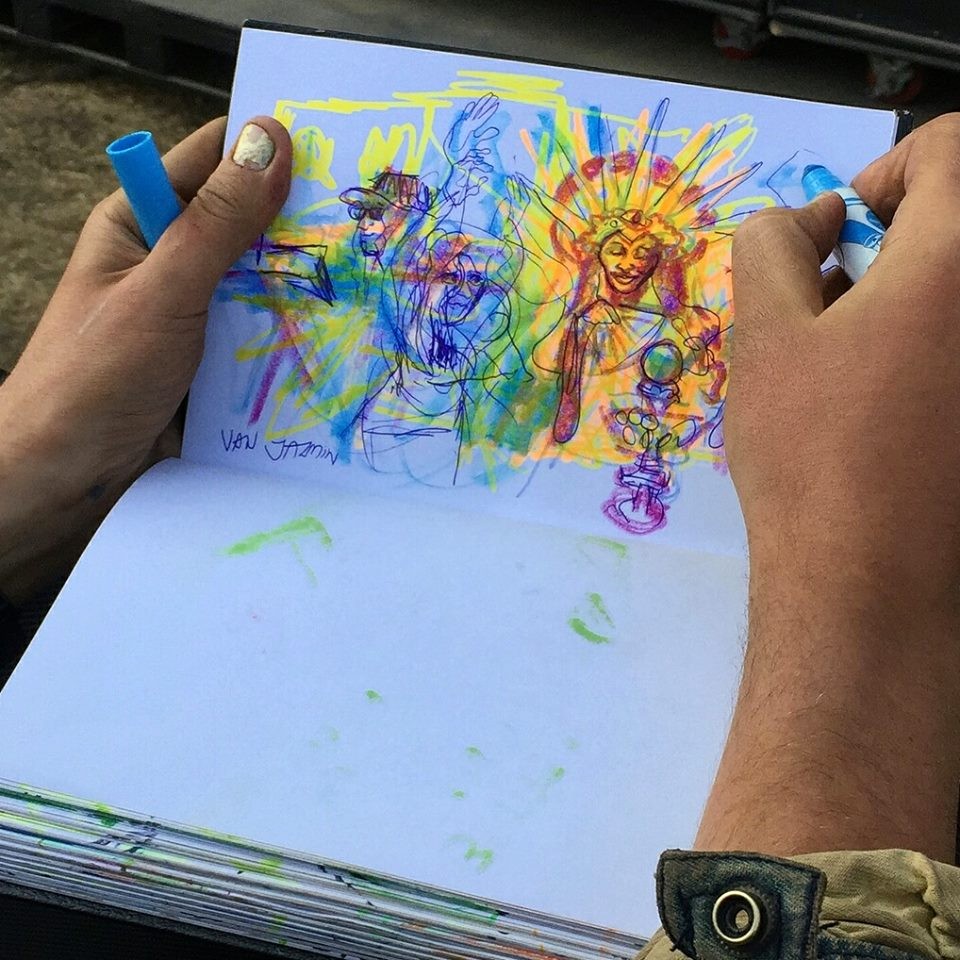 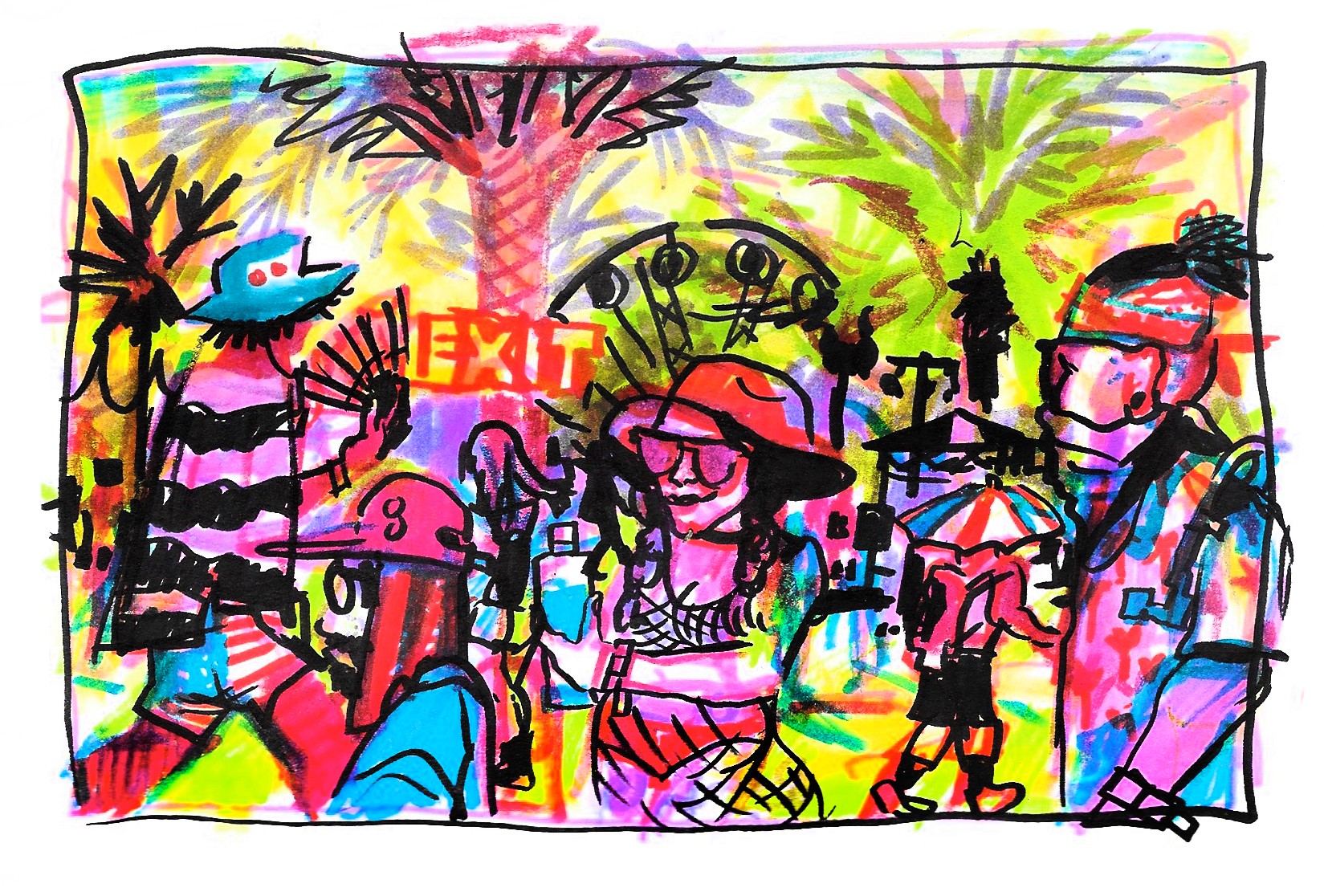 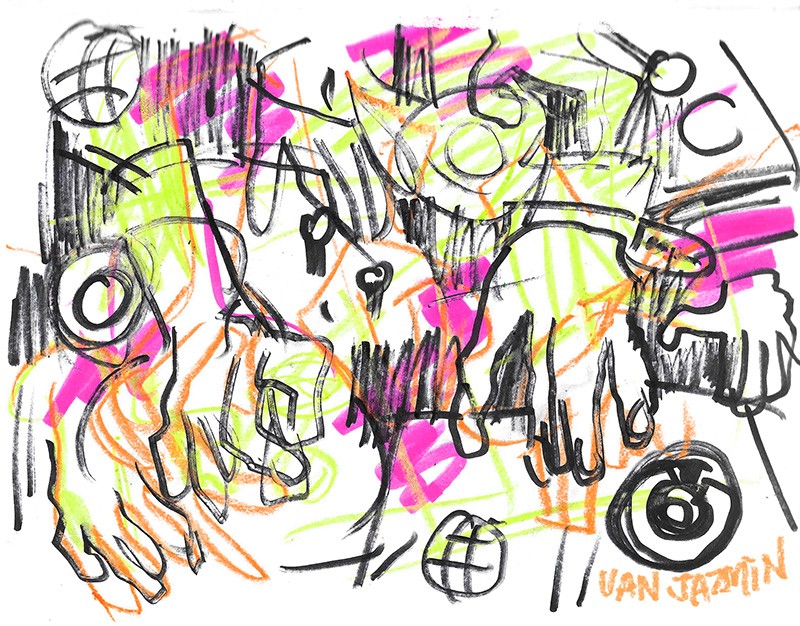 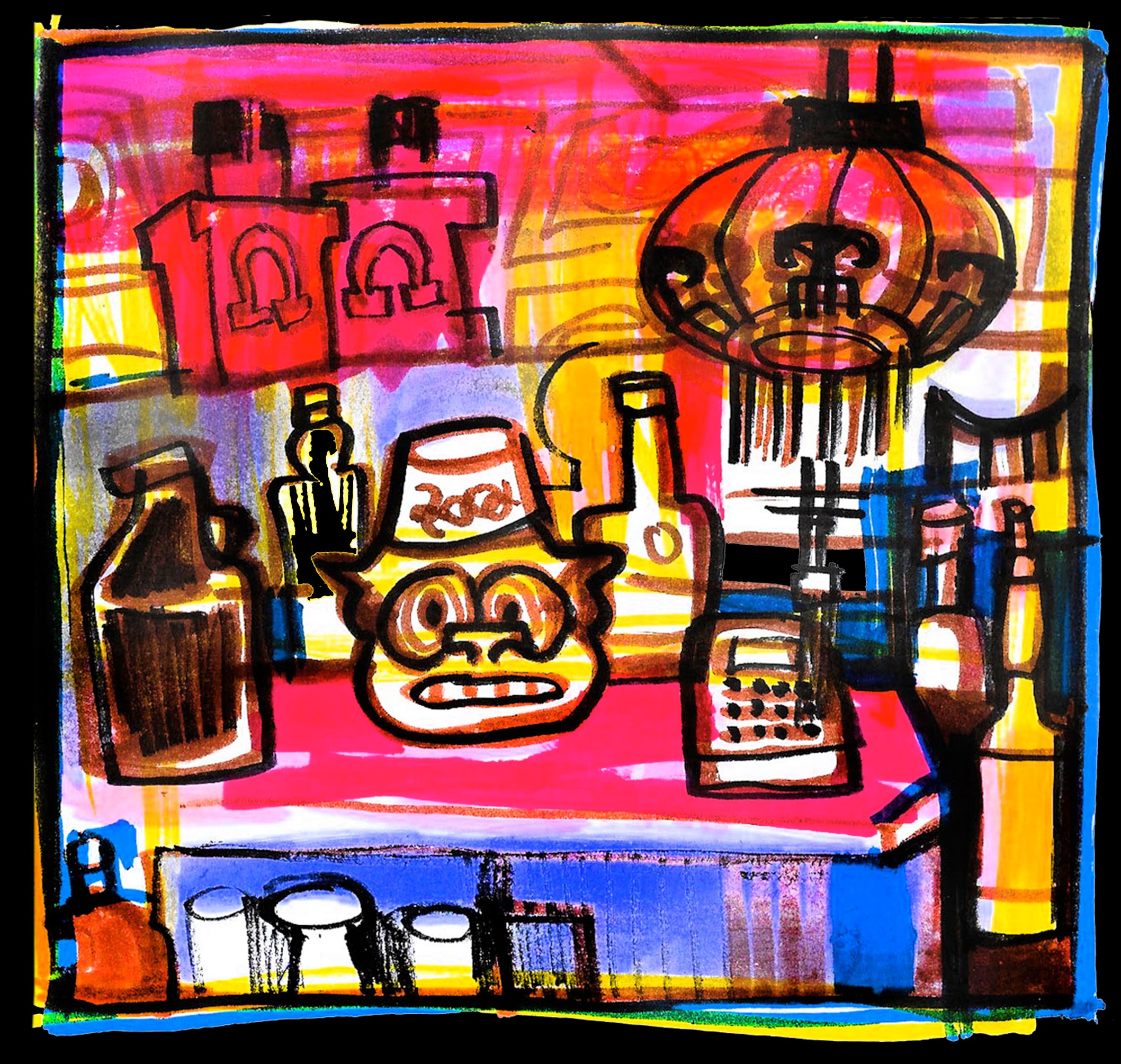 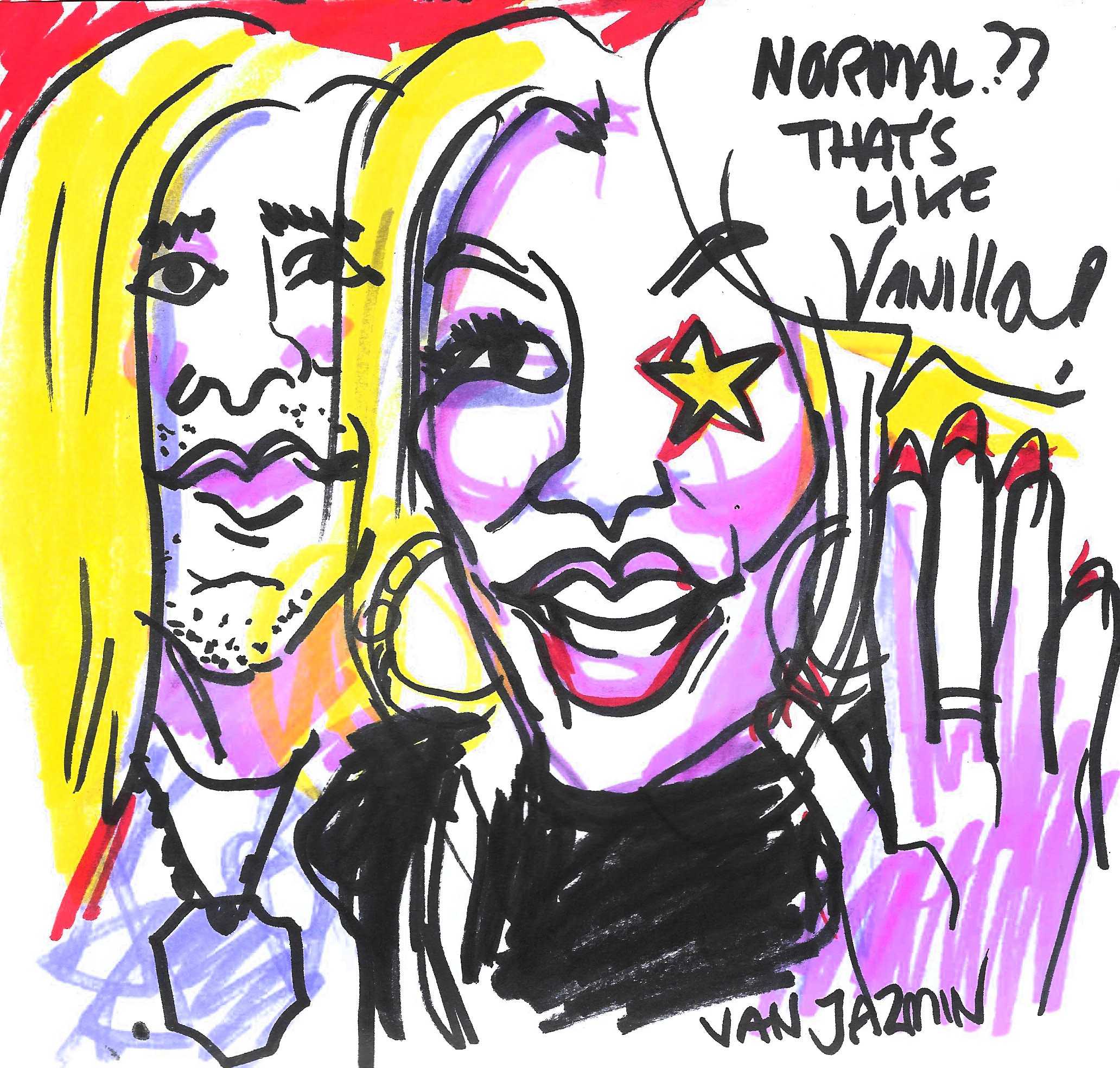 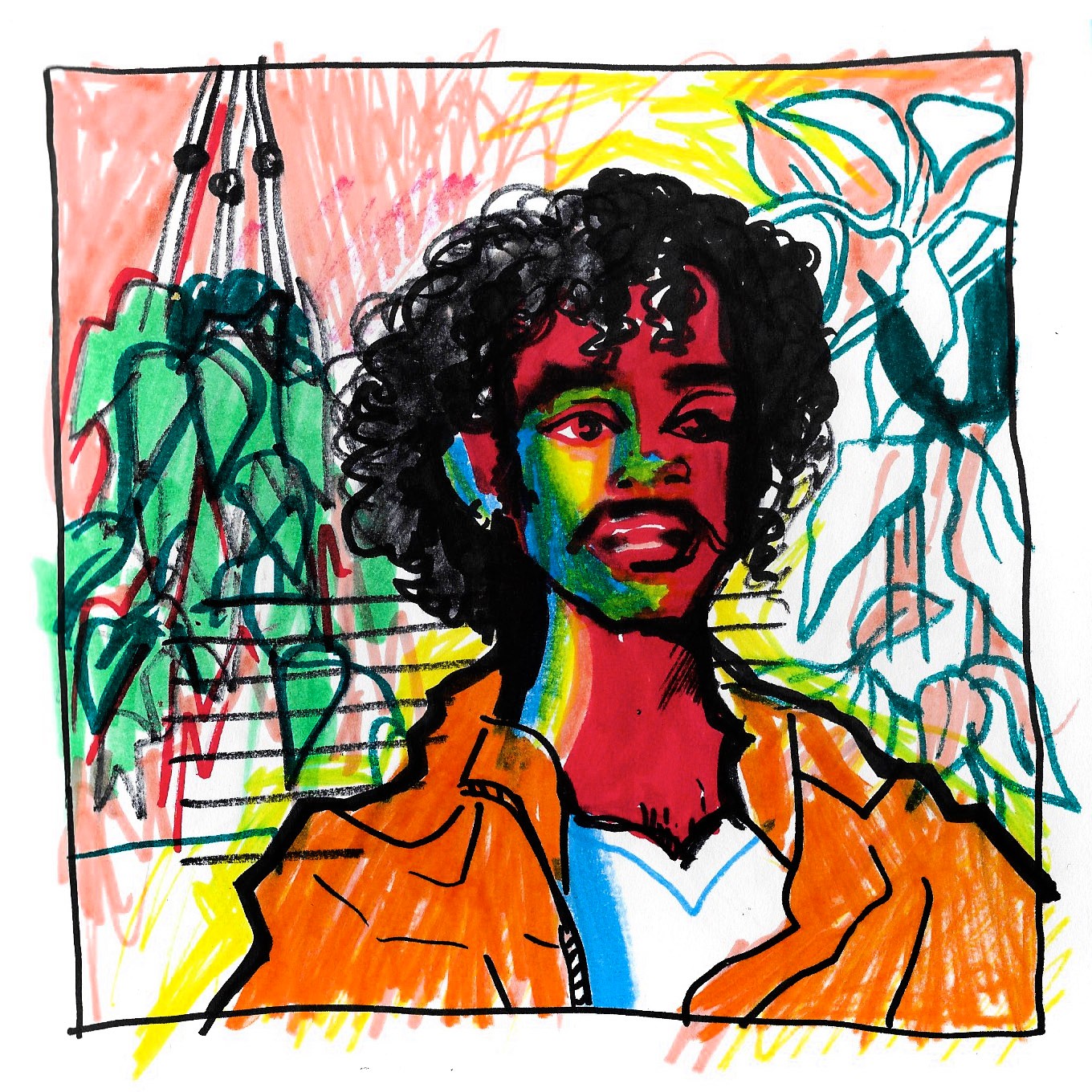 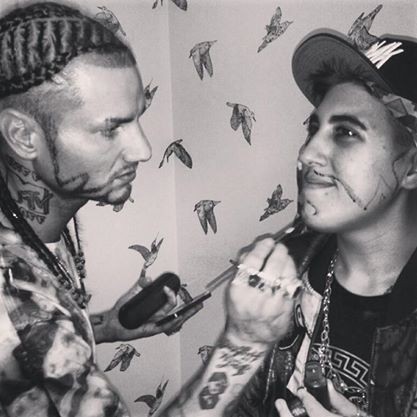 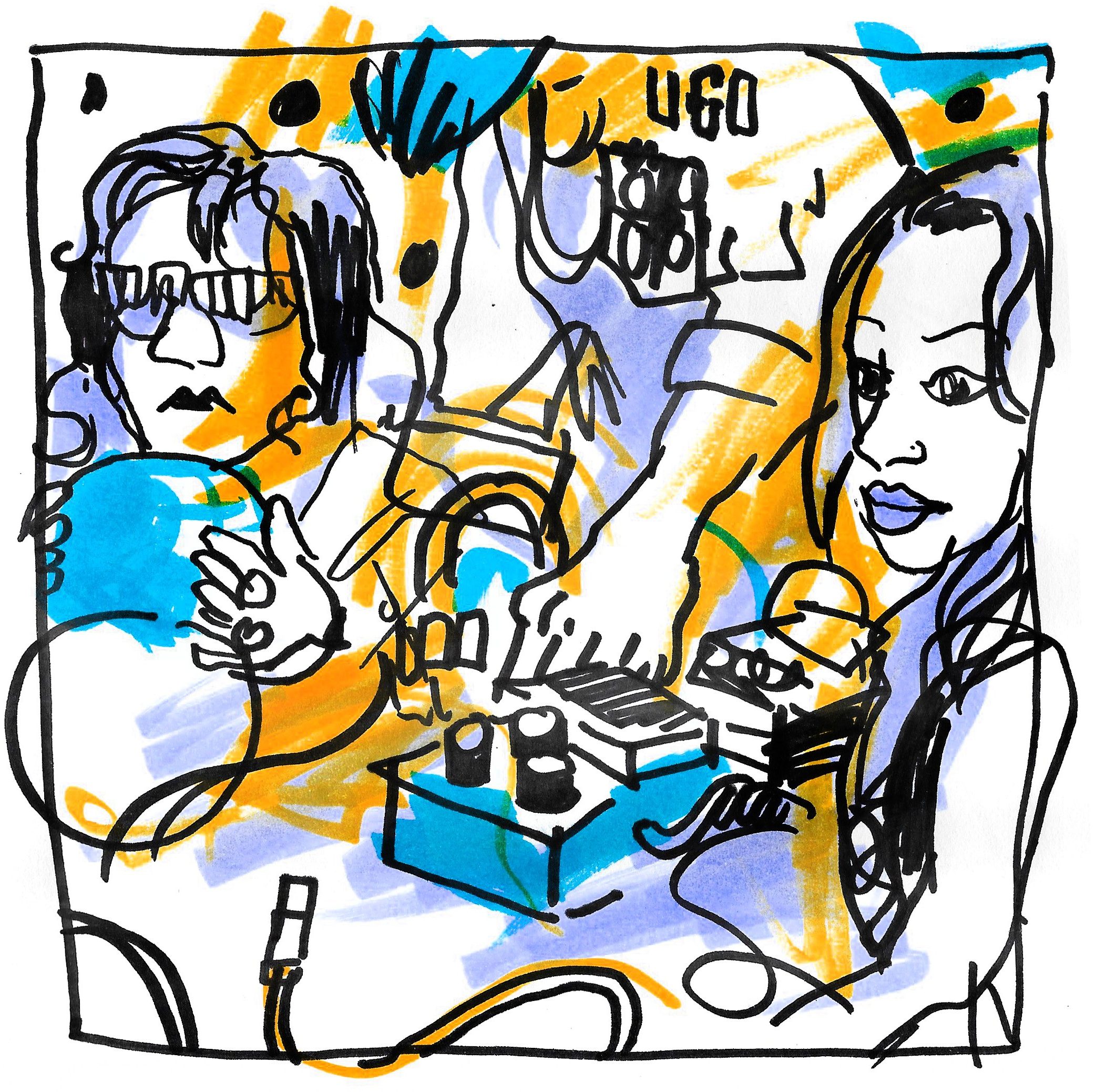 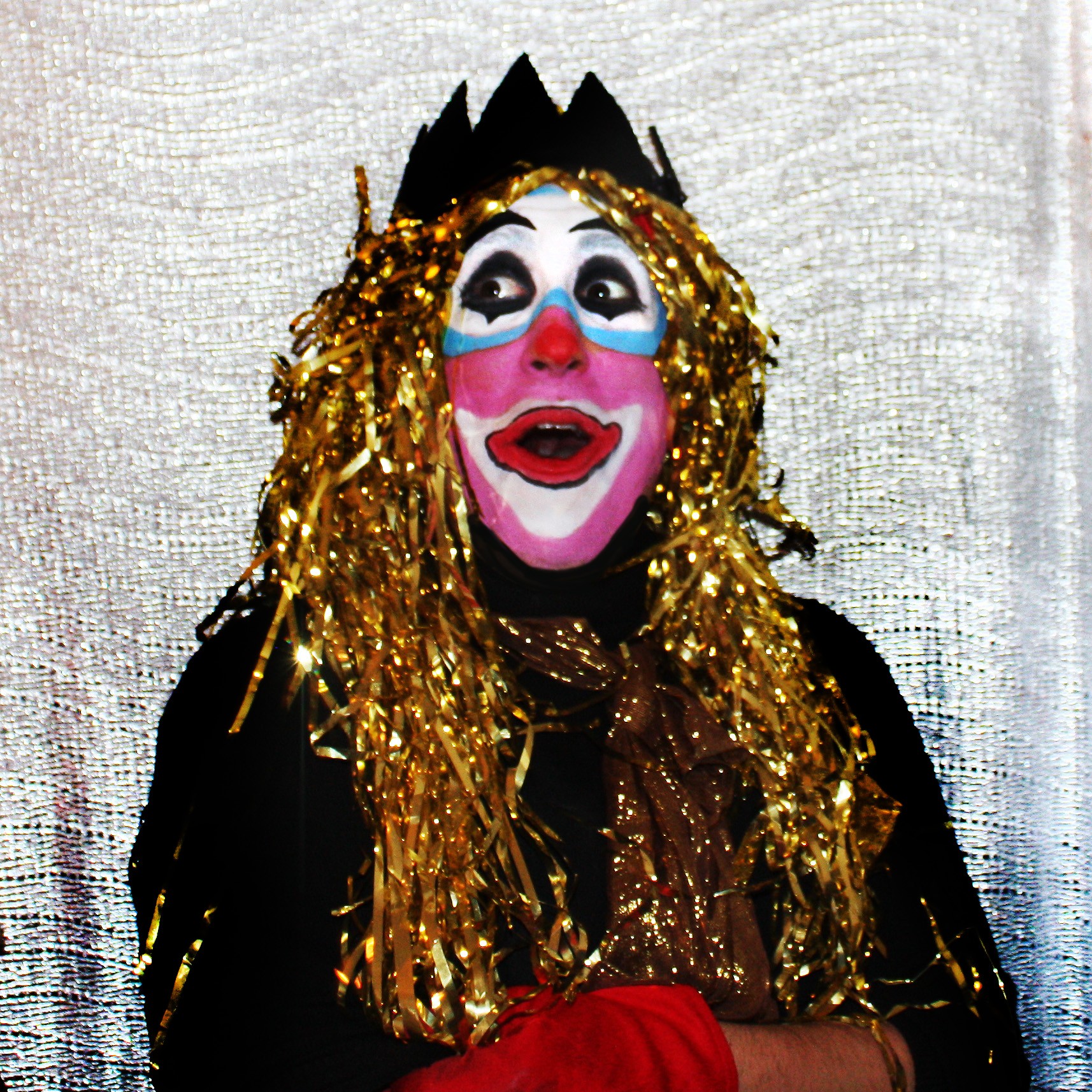 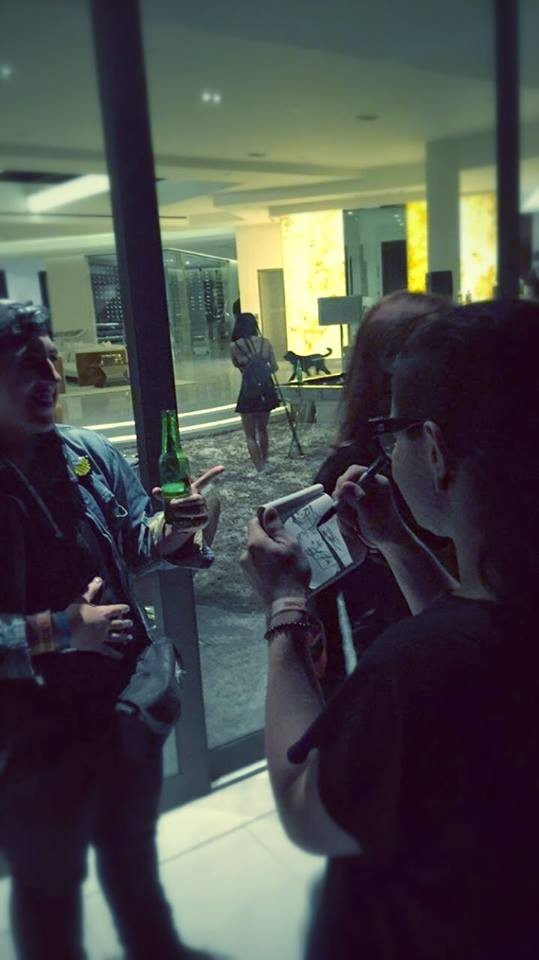 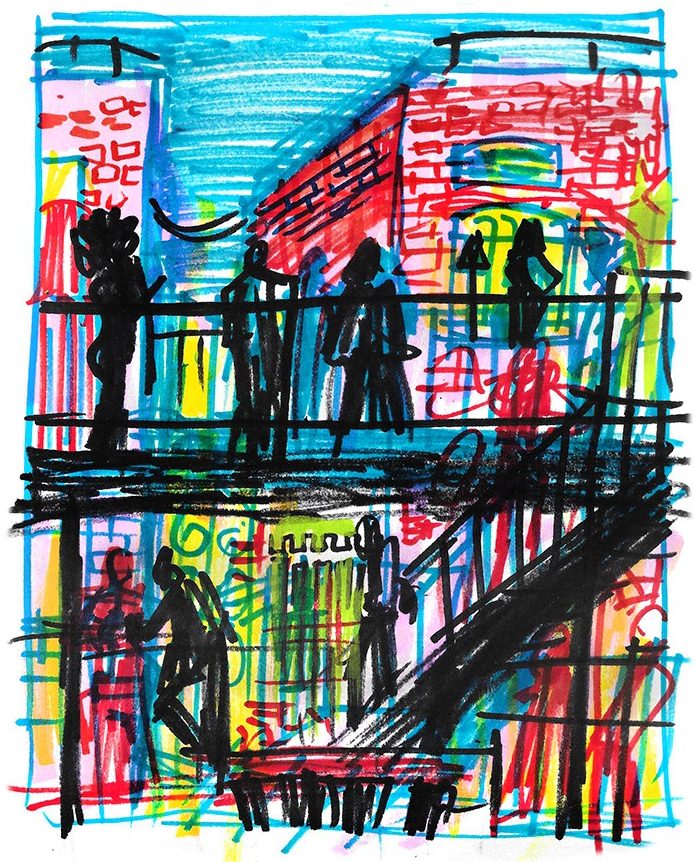 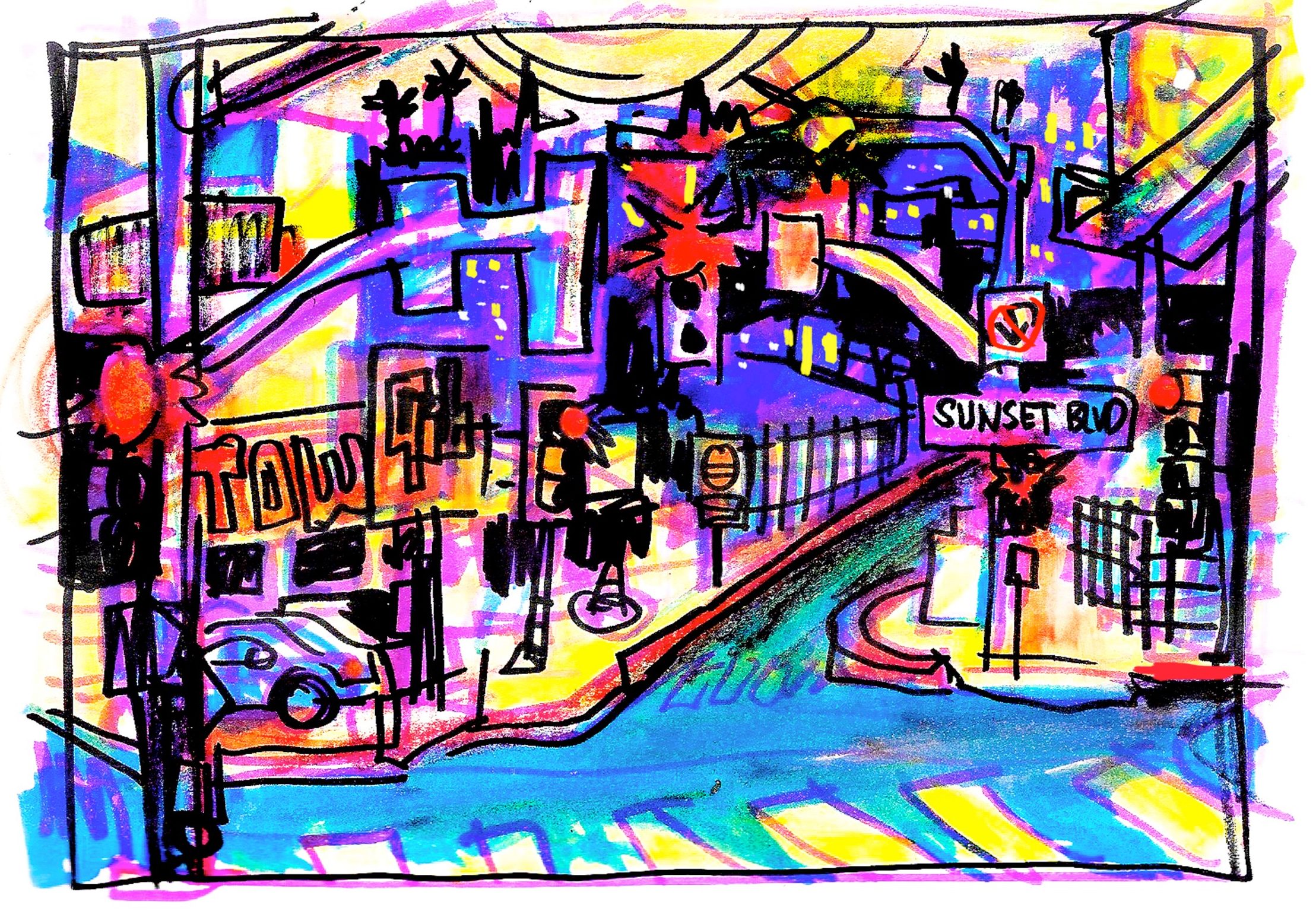