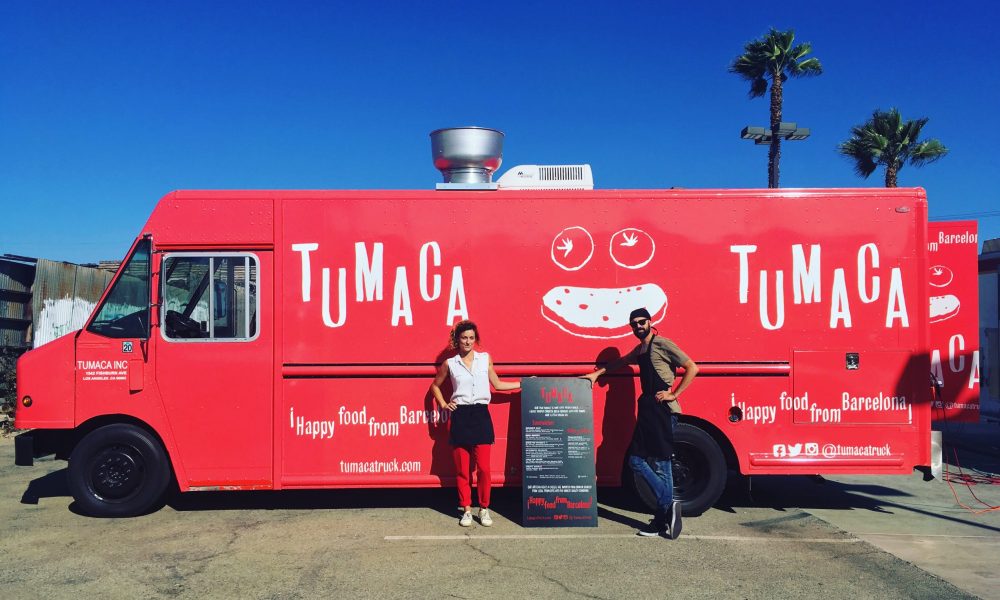 Today we’d like to introduce you to Mostly eastside (Downtown, Silverlake)’s Tumaca Truck.

I imagine many of your best customers don’t even know the story behind Tumaca Truck – can you share some of that story with us?
Sybil is Spanish but I’m French and before moving to LA last year, we had lived 10 years in Paris together, working in a very different sector (business consulting). That’s where we started sharing our love for the Catalan food (cooking at home for our friends), and thinking of opening a Spanish food business. A few years later, when we decided to make it come true, we thought that it would be much more exciting to live this experience abroad, and that opening a food truck was a good way to test our concept on a small scale, with a lower investment and relatively easy logistics.

We had always been attracted by California and LA looked like the perfect place to do it: a wonderful climate, flexible regulations, a thrilling culinary scene where the Spanish food was still underrepresented…

Now, to be honest with you, all this looks quite rational but when we decided to leave everything behind and jump into the unknown, our family and friends thought we were totally nuts… and we thought that they may be right 🙂

One year later, only one thing is sure: starting this crazy adventure was the best decision in our life!

Every story has its ups and downs – what are some of the difficulties you’ve had to deal with over time?
It has not been not easy to start a new business in a city that we didn’t know at all, especially because we had to adapt our concept to a foreign culture.

Before moving to LA, we spent a few months in Barcelona to work on our recipes, get some advices from Catalan chefs and make dozens of food tastings!

But when we arrived here, we had to make much more tastings before finding the right ingredients (either imported from Spain or sourced from artisan producers on LA’s farmers markets).

Finding the best bread for our sandwiches was the trickiest part. We tried about 40 bakeries (not kidding) without finding exactly what we needed. There are some good bakeries in LA but we were looking for something very specific and perfectly balanced, similar to the kind of bread that we use in Spain: soft and airy inside, crispy outside, and above all, not too dry nor too consistent. A friend of ours (working in the food sector in LA) finally introduced us to Bub and Grandma’s and that was a kind of “revelation”. We immediately fell in love with his bread, especially the sourdough loaves.

Back then they were still working on improving the ciabatta recipe and we had to wait a few more months until it was just perfectly adapted to our needs!

The best part about independent spots, in our view, is that they are able to think outside of the box and experiment with new ideas, take risks, cater to niches, etc. How does that apply to you guys?
Tumaca is the first and only Spanish food truck in LA!

Our menu items are directly inspired by the most popular tapas and sandwiches in Barcelona (also called “bocatas” or “bocadillos”), where people love eating on the go at any time of the day and sharing small plates for lunch or dinner between friends.

The idea was to bring them to LA and to start with a simple menu, using only the best quality ingredients.