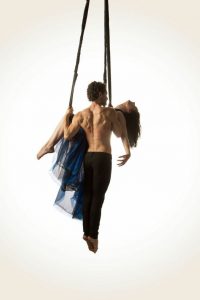 Today we’d like to introduce you to Tavi Stutz and Jane Rose.

Hi Tavi and Jane, thanks for joining us today. We’d love for you to start by introducing yourself.
We used to teach aerial circus classes at the same studio in North Hollywood, however it was at a show when we first became aware of each other. Jane was performing a lyra act in a holiday spectacular and Tavi was there to support other friends he knew performing in the show. We didn’t actually meet that night, that part would actually come a little later.

Tavi: When I heard that we taught at the same studio, I had to reach out to you and find out if you’d be interested in collaborating and putting together a duo act.

Tavi: Of course, in the back of my mind, I had hoped we’d work well together and this would become a much bigger journey. Our collaboration was then thrust upon us a week or so later when we were spontaneously booked for a photoshoot and asked if we could pose together in duo aerial fashion.

Jane: That photoshoot was so funny because at that point, we had texted back and forth about getting together to test out a collaboration and it was almost like the universe was saying “hurry up already!” Conversation and collaboration with us just flowed effortlessly from the beginning and so after doing a few stand alone projects together, we decided to take on a few larger, like traveling to perform in China, long range projects, like making a short film that used dance and aerial performance to tell the story, that would also integrate Jane’s design/media background and Tavi’s directing background.

Tavi: It was clear that we worked well together, so I asked her if she would be interested in starting a performance company.

Jane: And my response was once again enthusiastic and affirmative! We decided to call ourselves DConstruction Arts, which we officially launched as an LLC in 2014, and then reformed as a 501(3) nonprofit in 2015 because we wanted our work to include involvement in education and community building as well as showcase our artistic skills.

Can you talk to us a bit about the challenges and lessons you’ve learned along the way. Looking back would you say it’s been easy or smooth in retrospect?
When we sit down or stand up and dance about to create, the river runs fast and furious. Our ideas range in scale from giant art exhibits to an intimate two-person shows. The struggles that we have faced along the way of developing DConstruction Arts, like so many other small nonprofits, have mostly been related to the ongoing challenges of fundraising. We have faced this challenge by throwing a special event each year to raise money, along with ongoing support from our patrons throughout the year. We believe in the power of art to re-build, heal and help communities flourish and find ourselves wishing the process of funding our works came about more easily so we could be left to create the works of which we dream.

One project that Tavi choreographed and co-directed with JJ Mayes and projection designed by Jane was nominated for an Ovation Award. We held rehearsals for this play in Tavi’s living room or at a nearby park, so to be nominated alongside organizations like The Mark Taper or The Geffen Playhouse was a huge honor and left us dreaming about what we could accomplish if we had more resources. We have definitely had to refine our visions for different projects to make sure that it is something that we can feasibly produce. We have been incredibly lucky to have support from some different organizations and people along the way, including CalState LA (where Jane is a tenured faculty member), Aeriform Arts (the studio where we both were teaching when we met) and Dreya Weber (aerialist and choreographer for P!nk, Cher, Katy Perry, and others) who sits on our board of directors, who have all supported us with performance spaces and equipment uses for our projects. One of our goals for DConstruction Arts is to expand this so we can produce more work in the future.

Thanks for sharing that. So, maybe next you can tell us a bit more about your work?
In a nutshell, at DConstruction Arts we create and produce original works that use aerial and circus arts as a language for the story and we gravitate towards narratives that focus on different accounts of our humanity. We’re pretty experimental with how we go about this. We like to bring in projection, filming, audience interaction and participation, etc. We definitely aren’t your typical small theater company! An example of this can be seen in the award-winning show Definition of Man (that we are incredibly proud of) that was co-directed by JJ Mayes and Tavi and choreographed by Tavi and written by two wonderful artists, Nikki Muller and Jason Rosario, that we have collaborated with regularly throughout the growth of DConstruction Arts. Definition of Man is set in a post-apocalyptic landscape and stars Nikki and Jason as the last two people on earth. As we watch them struggle with this reality and their relationship to each other, the choreography that Tavi has developed for the show not only supports the narrative but almost becomes a second language that the characters use to relate and communicate with each other.

In 2020, when all live entertainment was shut down, we pulled out an idea we had thought about doing years ago… a podcast. All we agreed on in those early days was, “let’s do a podcast.” We had several ideas about the content of that podcast at the time as is the way with creativity, but none thrilled us enough into action, so onto the back burner it went. But, since show development was on hold, we decided it was the perfect time to start recording the podcast. Inspiration Is Everywhere: a Field Guide for the Storytellers of the World was launched to help remind people, ourselves included, that even though times are challenging and trying for so many of us in so many different ways, that inspiration is still out there and if we can find it perhaps it will help us through this time. We had a great time recording the first season and had some great conversations with some truly inspiring people. We’re excited about sharing it with any and all who are looking to be inspired. There’s another production that showcases our specialties called Love Is.. (which will have its first virtual presentation on February 11th!). Love Is… was initially conceived in 2016, and the approach that we took in this creation is never intended to be “done” per say, but will always be evolving in some manner.

The central focus of the show stems from the difference between the dictionary definition of love and what is actually meant when we (all the “we” – the many different people in the world!) say that we love something/someone. How we translated that into a show was to first gather a group of aerial/circus artists to participate, then for each artist we created a “Reveal Video.” The videos were created in a reflexive documentary style, and hours of video and audio footage were captured of each artist performing on their apparatus and then sharing their personal history, experiences, views and definition of love. The finalized videos ground the show experience and play as a way to introduce and then contextualize the performances that the audience sees. What is really unique about this is that often when you go to see a circus show, the performers are asked to be a big broad “character” which tends to be very much removed from the personality of the artist and are often set in dreams or fantastical lands. We love these types of shows and have had tons of fun working on them for other companies, but this show is all about letting the audience actually see the artist themselves in a very raw and personal way.

Showcasing our experimental spirit, we have performed/presented this show six different times and each time, we embrace the opportunity to do it a little bit differently than the last one. We are always playing with projecting the Reveals in different ways (different projection equipment, on different surfaces, different scales, etc.), the artists often create brand new acts for each performance and we also play with different ways to engage and include the audience in the experience. We teamed up initially because of our shared background in Aerial Dance/Circus work, so that is always at the core of our projects. Part of what made our collaboration (and then forming of DConstruction Arts) exciting was the ability to bring in other skills that we have used professionally. Tavi has a background in directing and choreography, and that skillset has been applied to all of our projects along the way and Jane has a background in sound editorial and projection design. We are most proud of using our skills and talents that we have spent decades honing into works of art & performance that we deeply care about and have a profound impact.

Risk taking is a topic that people have widely differing views on – we’d love to hear your thoughts.
Tavi: Sometimes getting out of bed in the morning is a risk. Don’t get me wrong, it’s not like my bed is floating above a sea of crocodiles. But I do have a little puppy that likes to be underfoot and I have fallen over, taking out a glass or two along the way, trying to avoid squashing her.

Jane: There’s also the literal risk we take every time we reach for an aerial apparatus. Joking aside, while we have both worked for non-profits in the past, neither of us have ever run one of our own, so taking this on was a risk for both of us. Running a company takes a lot of time and energy, and we have both had to say no to outside opportunities along the way to make sure that we are moving our DConstruction Arts projects forward. The risk that it takes to wrap for a big drop on the silks seems pretty reasonable to us, we know that one and can calculate it and train for it, but running a non-profit company that enjoys presenting experimental aerial/circus work and making it successful feels way more risky than that drop for sure! 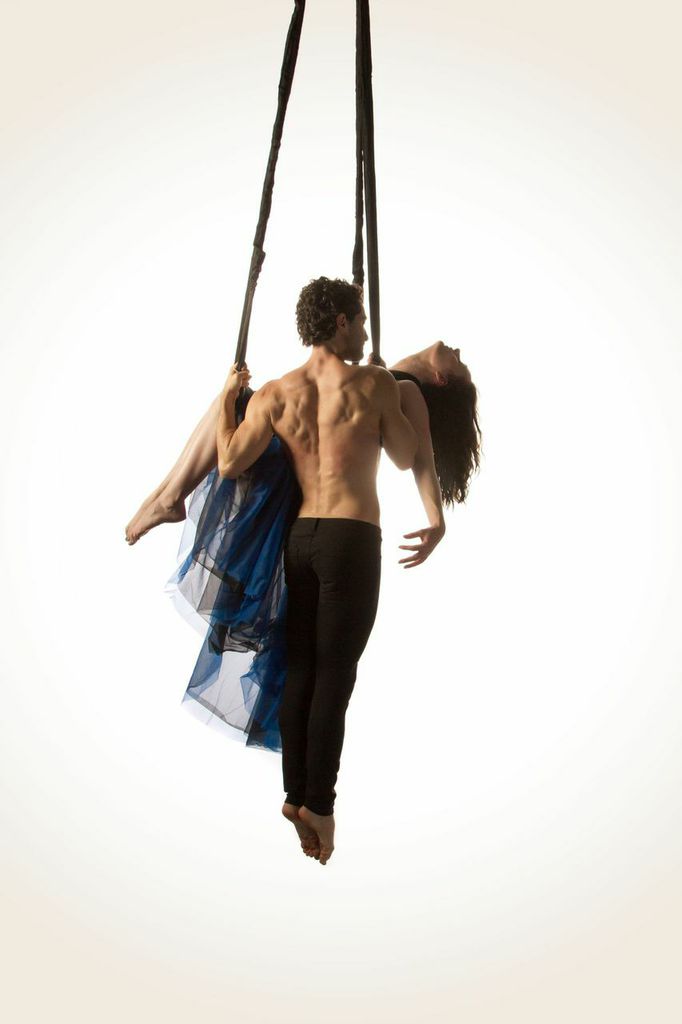 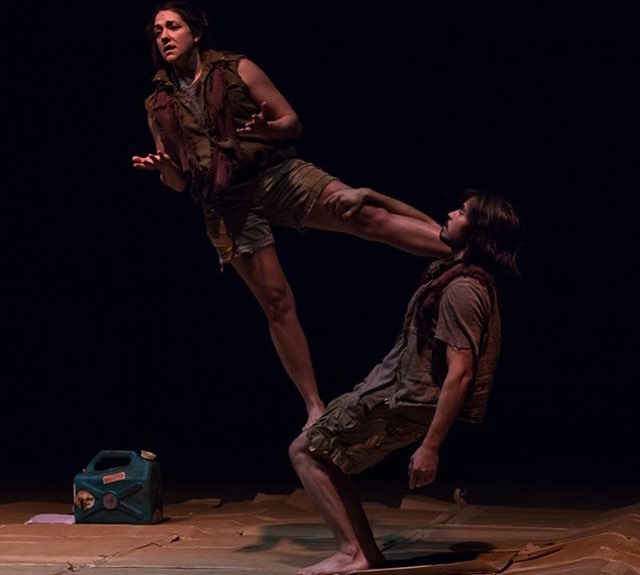 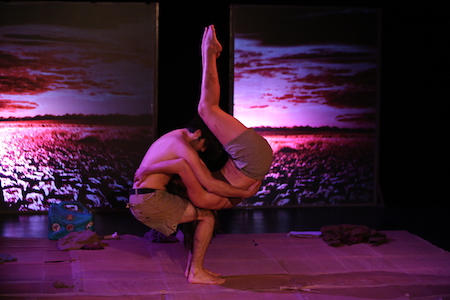