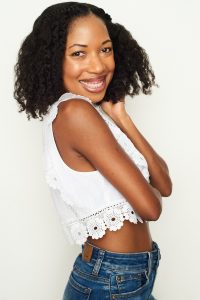 Today we’d like to introduce you to Danielle Sappleton.

Hi Danielle, please kick things off for us with an introduction to yourself and your story.
I was born on the little island of Jamaica in the 90s. My father is a chemical engineer and my mother is a stay-at-home mom and I have an older sister, four years older than me. My sister was and is still my first best friend. My mother dressed us like twins in the 90s (just imagine the outfits). Till this day, we are closer than ever and my sister is truly my rock. My family had a great life in Jamaica because my Dad was an engineer at the top of his field. We have a big family, my mother is 1 of 6, and my dad is 1 of 9 siblings. So I grew up in a house filled with aunts, uncles, cousins, and family friends. I was steeped in my Jamaican community, culture, food, proverbs, etc., and felt such joy at this point in my childhood. My sister and I often jokingly refer to this as the “before times.”

When I was six years old, my family went on vacation to New York City. I grew up watching and fantasizing about America, or as Jamaican people would call it: foreign. Jamaican people lovingly refer to the rest of the world, outside as Jamaica, as “foreign.” My eyes were wild with excitement when we landed in New York City. I could not believe I was in America and the people looked so… American. The way they walked, talked, and acted, all of it enthralled my 6-year-old self! I practiced my American accent and pretended I was American, only I didn’t know I would not be pretending very soon.

After our vacation, my mother, being the impulsive visionary she is, told my father that she wanted to move us to the United States for more opportunities. My father went back to Jamacia alone after that vacation, and my mom, sister, and I took a bus to South Florida. We took a bus to meet my grandmother in South Florida. My grandmother had lived in the United States for many years at this point, and she put in the paperwork for us to become US citizens and we stayed with her for this new chapter of life.

This was obviously a traumatizing adjustment. I had always dreamed about being an American, but I did not really want it for real and not without my Dad. My Dad stayed in Jamaica to work until he could get transferred over to work in the United States.

Living in Florida was difficult. My sister and I had to adjust to a whole new way of life. I was six years old, so I adjusted quickly and practiced my accent every day by watching Bold and the Beautiful. I soon started school and I made friends. However, American life was a struggle without my father there with us. We missed him so much and we were so happy to see him when he visited every summer. My mother was overprotective, she had been this way since Jamaica, so my sister and I spent most of our days after school and on weekends watching television. We often joke that TV raised us and taught us to make good choices in life.

When I was nine years old, my father got transferred over to Baton Rouge, Louisiana. My mom, sister, and I packed up and moved there. It was a culture shock, to say the least. I found I had to readjust my whole “Americaness” to fit this new place. South Florida has a vibrant Jamaican culture that still made us feel like we still had some connection to home. Louisiana had none of that and it was a difficult time for me.

At 12 years old, my Dad got a job offer in Australia and that’s where we went next. If Louisiana was a culture shock, Australia, was worse. We lived in the tiny town of Gladstone, Queensland about 6 hours away from Brisbane. Again, this was a struggle time for me and my sister. We were in a town in which you could count all the Black people, and it was very isolating. We enjoyed getting to experience a new culture, but we longed to be “normal” and not move around so much.

I got my wish when I was 13, and we moved to California, we have been here ever since.

Throughout this time, I have always wanted to be an actress. Ever since I was a little girl in Jamaica. I would spend my days thinking about how I could be on Barney, my favorite show at the time. I would practice crying in the mirror and put vaseline on my lips because all movie stars had shiny lips.

I was so happy when we moved to California because I knew California was the place I could make my dream of being an actress come true. I started acting at 14 when I got the lead in my first school play. I kept acting in high school and college. I got my degree in theatre, emphasis in performance from California State University, Long Beach. I have been pursuing acting professionally since I graduated.

It has not been an easy journey with my career, but honestly, my life hasn’t been easy either. It has been an eclectic mishmash of many things, but I am so happy to be at a place where I can reflect on my story and my unique experience!

Alright, so let’s dig a little deeper into the story – has it been an easy path overall and if not, what were the challenges you’ve had to overcome?
No, it has not. I have wanted to be an actress since I was five years old. In school, I was a straight-A student my entire life, even throughout college. I would always tell myself, “I am working so hard in school because when I start my career as an actress, I’ll keep working hard and I will make it to the top of my field.” After college, I considered graduate school, but I always had a sinking feeling when I thought of it. I had spent my whole life killing myself to do well in school and at the end of college, I was tired. I wanted to experience life and start acting professionally. I thought my career would take off a year after college. I was wrong 😂 (we laugh so we don’t cry).

Nope, six years later, here I am, telling you my story. To be clear, I still believe in my bones that my career will take off at some point. However, it has been a different journey than I expected.

I moved to Los Angeles straight out of college. I even had an agent. During my first week in LA, I met a man that wanted to cast me in his film. It felt like it was all coming together. Everything I had worked and waited for. Except I would soon see that it is more complex than that. I eventually made that first movie, but it never got released. I spent all of my time auditioning and only booking one job every few months. It was so discouraging and I could not believe how unprepared I was to pursue acting professionally. I had thought my lifelong desire would have made it easier, it did not. Rejection hit me hard and I started to feel like it would never happen for me. I booked some short films that kept me going, but I wanted my career to blow up, why was everything so hard?

I moved home with my family, started taking acting classes in LA, anything from commercial class to scene study to audition techniques. I was confident in myself as an actress when I graduated from college. However, I did not know how to break down scripts for auditions, audition for commercials, and create self-tape auditions. All these practical aspects of being an actor, I was never taught in school. It was jarring and heartbreaking at the same time.

I had to teach myself how to go about this industry on my own through every experience of class, workshops, and talking to my other actor friends. It has been a difficult journey and I have had many setbacks. Now, honestly, I try to see every obstacle as a gift. Forcing me to dig deeper and continue to pursue my path with passion.

Can you tell our readers more about what you do and what you think sets you apart from others?
I’m an actress. I have been in commercials, short films, independent films, and a Youtube series. All of which, I’m sure you probably have not seen. My most recent short film, Misfits, was at the Etheria film festival in June and July. I am most proud of my dedication to my craft, despite the setbacks. During the pandemic, I have taken over ten acting classes and workshops through zoom. I am still so passionate about acting. This year, I became eligible to join the union and I have a manager and a commercial agent that actively send me out on auditions.

I am also so passionate about fashion and I am in the process of creating an online stylist business. Hit me up if you are looking to spruce up your style or you are looking for that killer outfit for a special event!

What do you like best about our city? What do you like least?
I love that there is a sense of possibility in the air in Los Angeles. Sometimes you get jaded and you can’t feel it, but it’s always there. This city is filled with art, love, poetry, innovation, and ultimate creativity and I truly love being surrounded by that energy.

I like driving/parking the least, it gives me anxiety. Driving in LA has made me an overly cautious driver. I always think about the parking situation before I leave my house. It takes up a lot of brain space in LA, but it comes with being a big city. 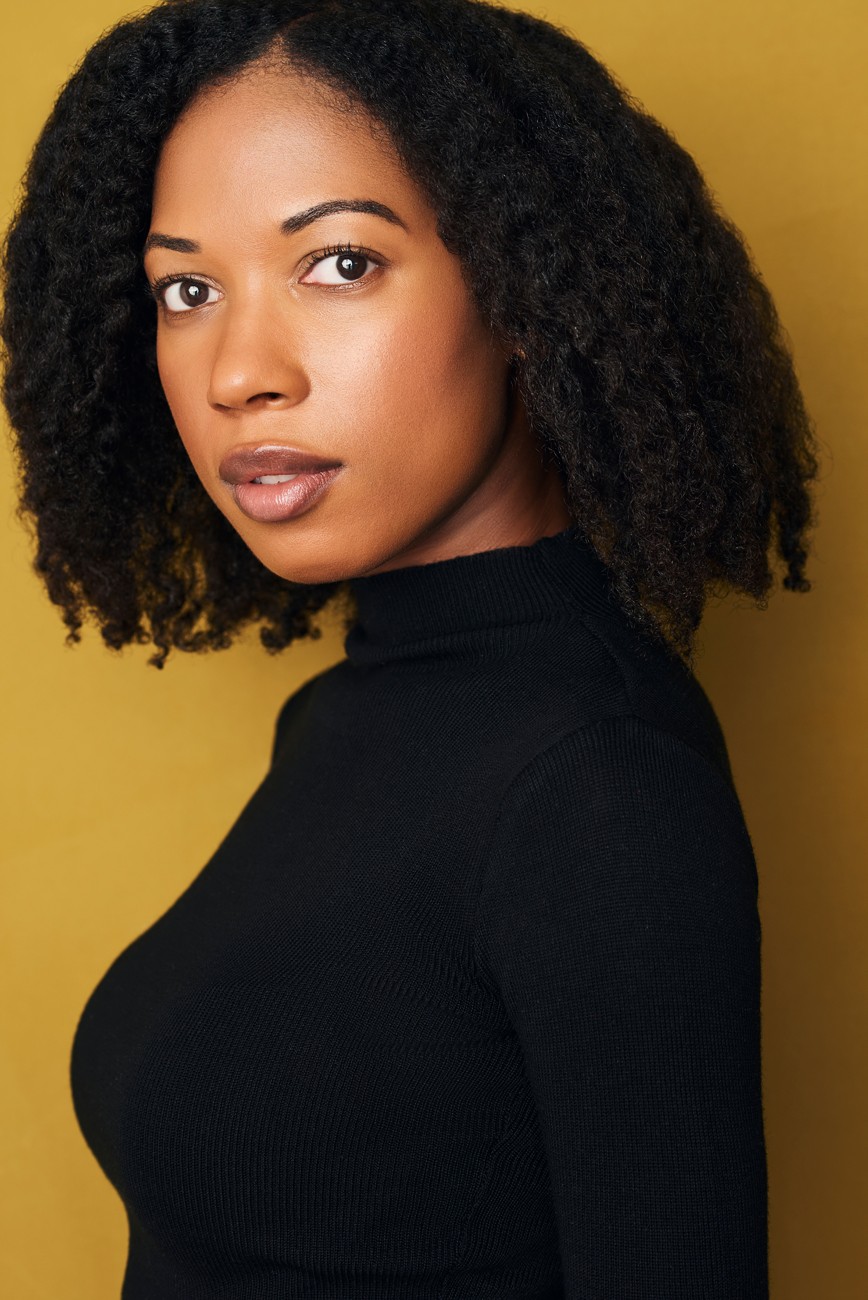 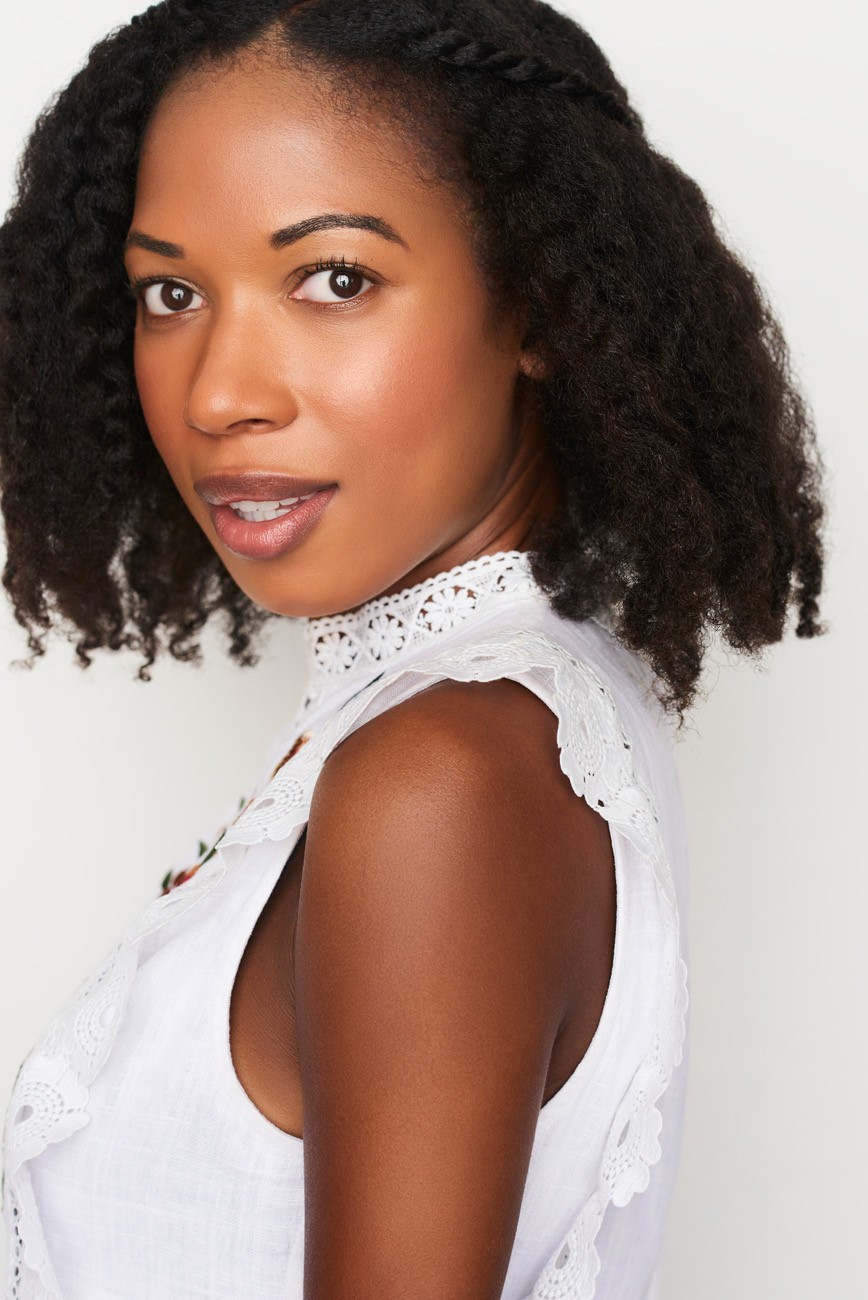 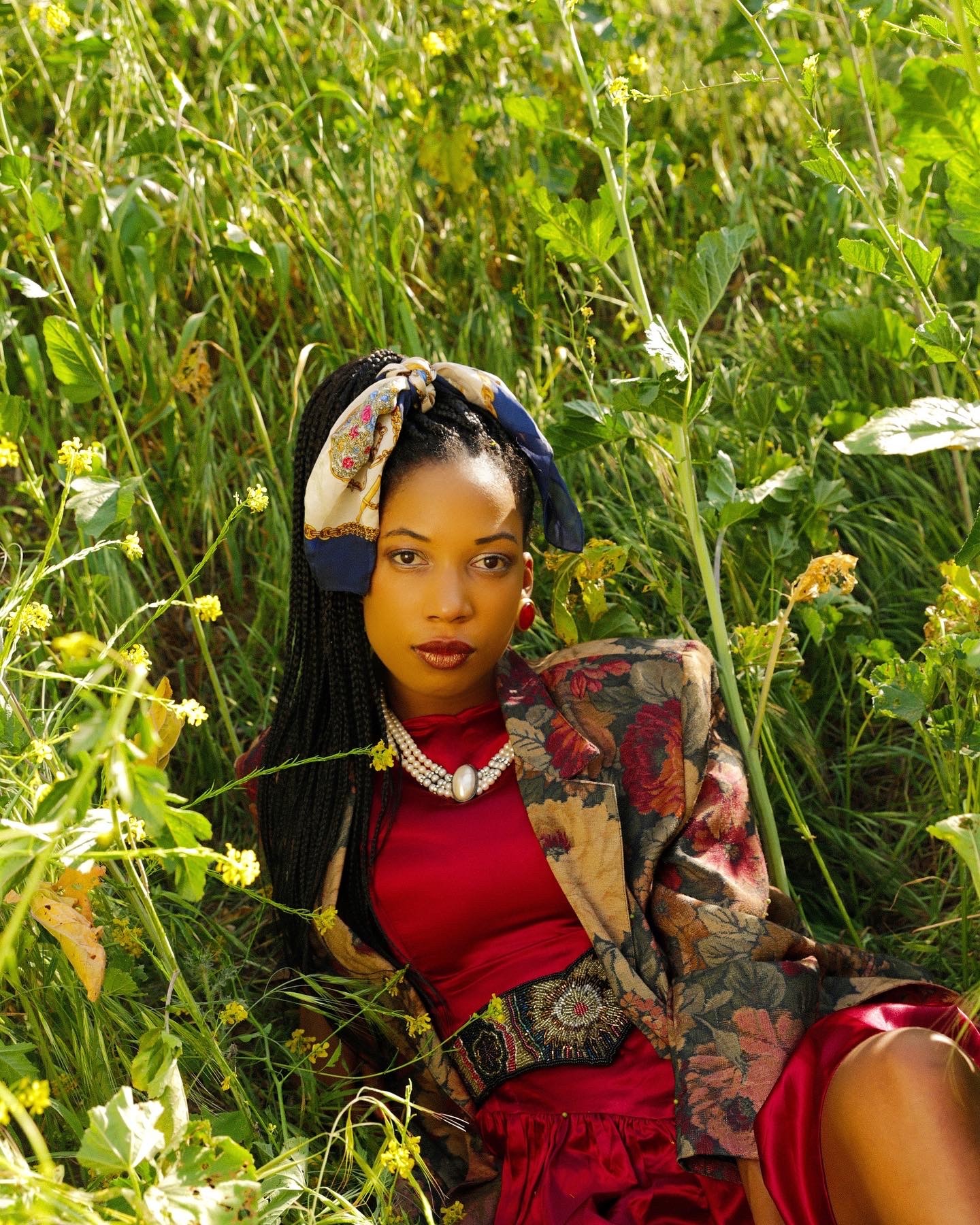 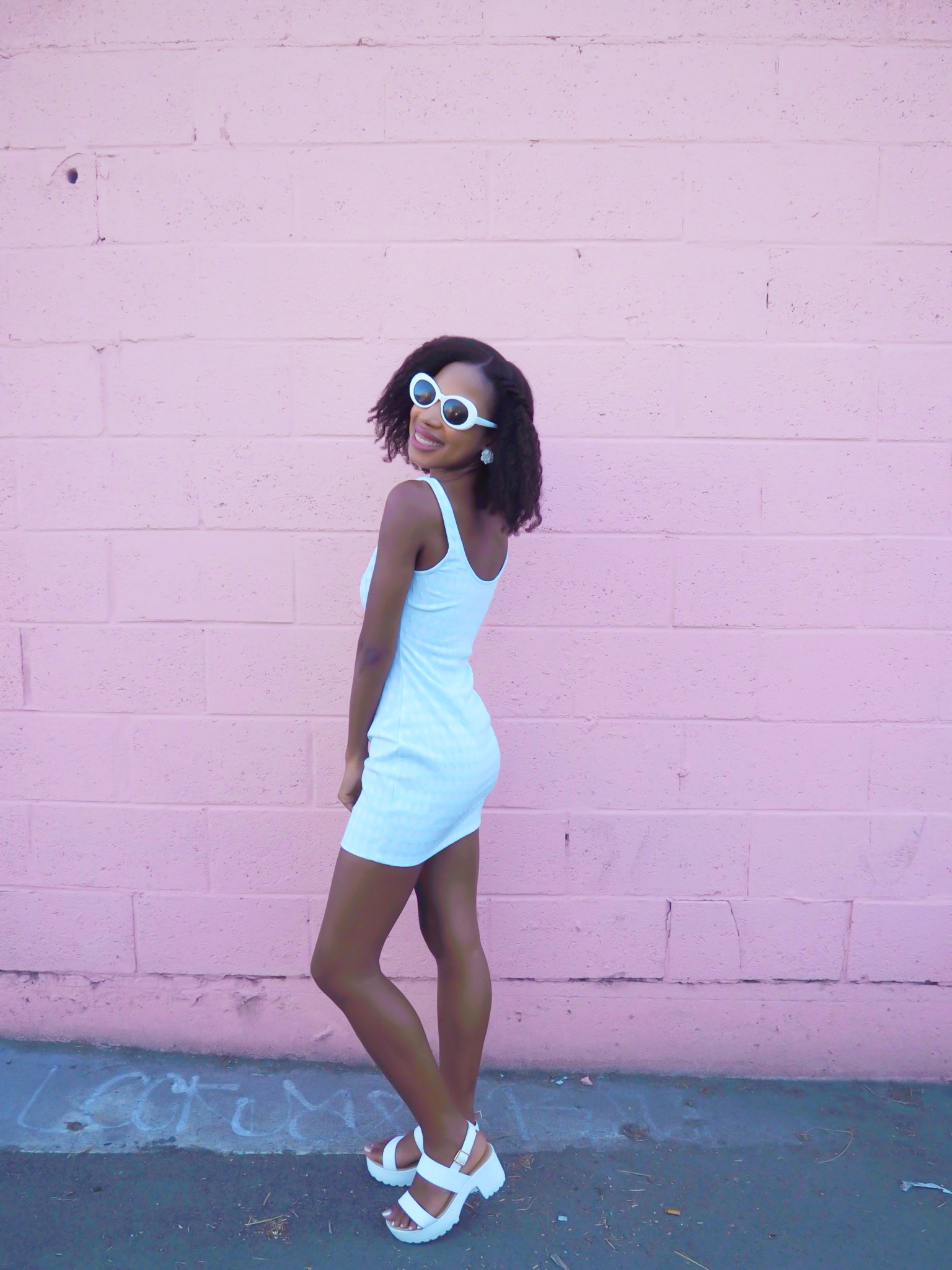 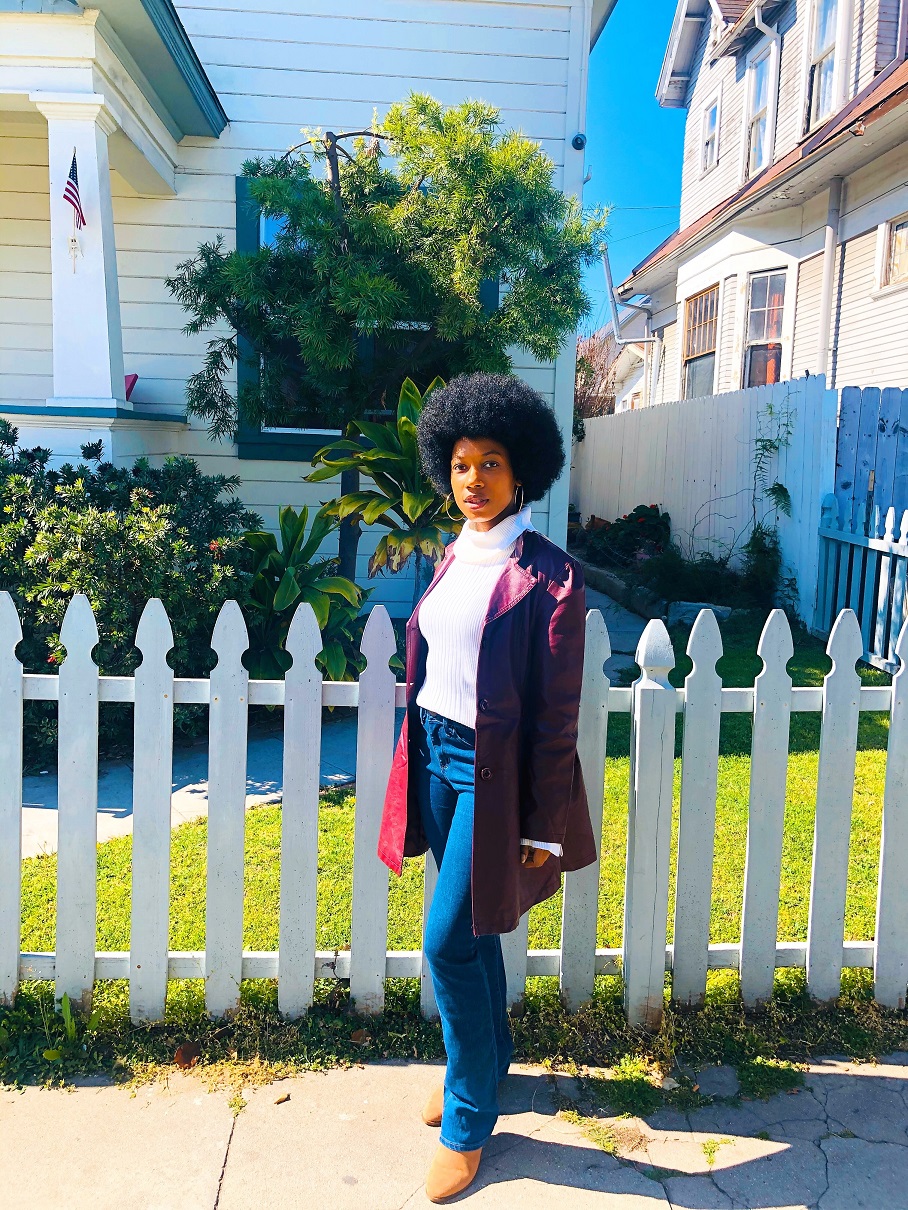 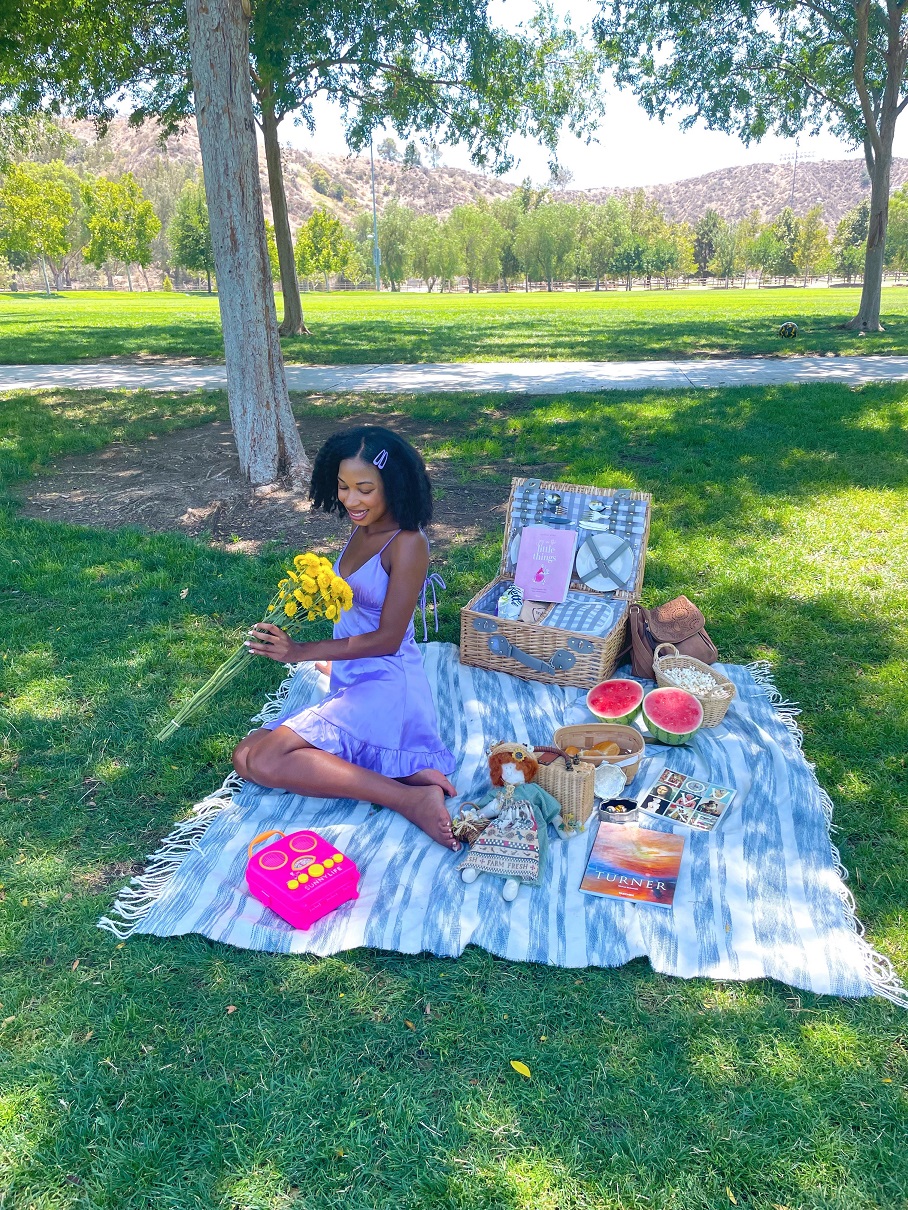 Image Credits:
With Afro- Danielle Sappleton on the set of Misfits.