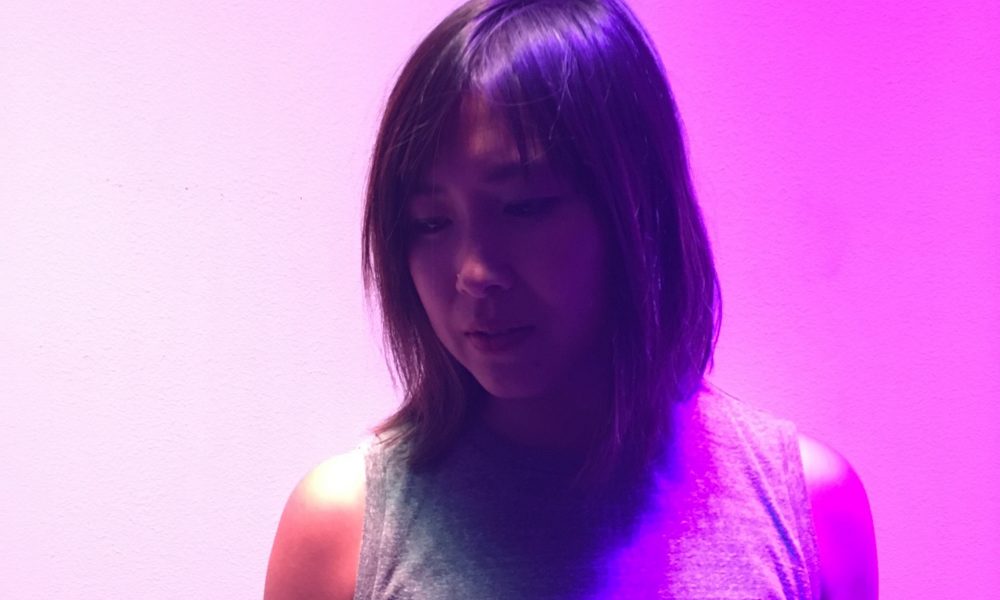 Today we’d like to introduce you to Winnie Wong.

Winnie, before we jump into specific questions about your work, why don’t you give us some details about you and your story.
I didn’t always know I wanted to work in film. I took one film class at UC Santa Barbara where I did my undergrad and was a Psych major before switching to pre-Law right before my senior year. I worked for the Investigator’s Office of the Public Defender of Santa Barbara and watched surveillance tapes to log notes and helped deliver subpoenas to unsuspecting folks. It wasn’t the most riveting work, but it did give me some insight into the bureaucratic legal system.

I remember in that one film class, we watched clips of movies during every lecture and analyzed and wrote critiques for discussions. One film that moved me, in a way that none had before, was The Celebration – a Danish film directed by Thomas Vinterberg. I’d never had that type of visceral reaction watching a film. I remember sitting on the edge of my seat during the entire screening and wanting to know everything about Dogma 95 after that.

At the time, I didn’t make the connection that working in film was a realistic profession. I didn’t know anything about directing, producing, or cinematography – or anything about the below the line roles that you could take up as a career. I continued to study Law & Society and graduated with a BA in 2005.

Most of my friends from college were either from the Bay Area or Southern California. I was born in Hong Kong but had grown up in Gonzales – a town of 8000 people, and I knew I wasn’t going back after I left. After completing college, I stayed in Santa Barbara for another few months studying for the LSAT and working part-time as a server at a popular Japanese restaurant. After taking the LSAT, I wasn’t so sure that I wanted to go right back to school so I moved up to the Bay and lived with my parents for a few months taking up temp work where I could.

After several months of crashing at my parents’, I was recruited by a tech start-up in SF, interviewed and hired to be an inside sales rep selling and renewing tech contracts for universities and government entities. I worked my way up and was promoted to be a team leader over the course of three years, managing 15 reps between the company’s SF and Nashville offices. Towards the end of those three years, in 2009, I realized I was trying to fill my spare time doing volunteer work, taking up photography as a hobby, and spending as much time outside of the office as possible. I wasn’t fulfilled and felt like I needed a change, so I booked a one-way ticket to Thailand – planning to travel through Southeast Asia with just a backpack for three months.

It was on a street in Phnom Penh that I came across a flyer posted on a telephone pole. It promoted a film screening on the rooftop of an art gallery. I went by myself, watched this incredibly personal documentary called In A Dream, and came to the conclusion that I wanted to go back to school to learn how to make documentaries and pursue a career in journalism.

Without a background in writing and having never worked at any of my school newspapers, I felt like the barriers for entry to a J-school was really high. I applied to the Academy of Art, an art school in downtown SF, and entered its two-year multimedia journalism graduate school program. Looking back, I definitely did not need to go to that school to do what I’m doing today, but such is life.

In 2012, I started interning and working as a PA for various film and commercial projects eventually landing a coordinating and associate producing job at another startup called Joyus (ran by mostly women) creating informational e-commerce videos that sold lifestyle products. I stayed there for almost a year before moving on and working with other companies as a freelance production coordinator. I bounced around as a freelancer until a good friend called me in 2014 and asked whether I’d be interested in contracting with the company she worked for full-time, Pandora Radio.

She knew that I loved the freelance lifestyle and said, “Come and check it out. If you love it, it could lead to a full-time position. If you don’t love it, you can always bounce and go back to freelancing.” I ended up staying for three years and making some of the best friends I’ve ever had. When I left Pandora, I left as a senior producer making a six-figure income. I loved my time there and I learned a lot about the music industry as a whole but felt like I hit a ceiling. I missed working on faster-paced commercials and more cinematic projects, especially in the narrative world.

I met my boyfriend on set a few years ago, on a Pandora shoot actually, and he lived in LA – having moved with a bunch of other film folks from Nashville a few years ago. When it came to thinking about where I was headed next, LA seemed like the natural choice. I wasn’t in love with the idea of moving here but had worked here a lot over the last few years, have solid friends from college and the film community working and living here. That instilled some confidence knowing I wasn’t starting over from scratch. I also had spent a few months working on a narrative feature in Louisiana last winter and met some of my favorite people who were all based in LA. So the thought of moving to be in the same city as them made it all the more appealing.

Surprisingly, I’ve been busy. I thought it would take longer to find work once I moved, but I’ve only had a few pockets of downtime since last February. I’ve been producing mostly branded, commercial, and music doc projects – but the goal is to work on more narrative, longer-form content like features or TV shows. It’s been a while since I’ve had the opportunity to stay with a project from conception to distribution – I crave that kind of ownership and feel like I would thrive in that environment. It’s just harder when you’re starting out and trying to make a decent living doing what you love. I think for me, it’s about identifying that group of people I want to be in the trenches with or finding that foundation of work I want to champion. That’s what I’m working on now – besides freelancing – is nurturing my current relationships, being open to new opportunities to collaborate, and honing my skills as a creative and line producer.

Great, so let’s dig a little deeper into the story – has it been an easy path overall and if not, what were the challenges you’ve had to overcome?
I think a lot of people in this field question their own abilities and whether they deserve to be where they are. A lot of us, especially women, suffer from the self-imposed Imposter Syndrome. The older I get and the more I work, the more convinced I am that I’m the only thing holding myself back from moving forward. I’m someone who typically doesn’t want to dive into something prematurely – knowing that over time, the stakes get higher when more money is involved when you have a role in leadership on a project, and when you’re actually held accountable for people’s livelihoods and safety. Being a producer can come with a lot of responsibility, and I don’t take it lightly considering part my job is to make sure I’m hiring the right people for the job, people feel safe, seen and heard on set, and we are able to make a project the best version of itself, on time and under budget nonetheless.

I also don’t come from a family with any experience in this arena. After immigrating to the U.S., both my parents worked really hard running their own business while my older sister and I grew up. I didn’t have anyone who sort of mentored me or showed me what this path could look like. My dad had a deep appreciation for this medium, and I remember him sitting me down to watch films like Lawrence of Arabia, Ben Hur, Breakfast at Tiffany’s, Modern Times… explaining that these movies were an education for history, culture, and society. That has resonated with me to this day. I still think it was a way for him to help me assimilate into a new place and learn a new language. I’m forever grateful for his foresight.

We’d love to hear more about your work.
I’m a freelance producer – I typically field, creative, and line produce – sometimes taking on the role of a PM (production manager) if I know I can’t be on a project for a longer span of time.

What this means is, I’m typically in charge of: Interviewing, vetting, and hiring artists and crew members, working with locations either with a team or department (or directly with property owners and managers), working with a casting director or agency (or directly casting talent), working with the director to get their script in a solid place, building out a production calendar that details the various levels of prep, shoot, and wrap for all departments, building out an estimate or budget to determine what the production will cost, helping to find financing for the project whether through private investors, grants, crowdfunding, and/or other avenues, working with composers, foley artists, sound designers, mixers, colorists to fine-tune edits, promoting on social media platforms… and that’s just a few slices of the pie.

Depending on the budget and scale of the project, I could be helping the team look for period-accurate picture cars or helping the production designer coordinate pickups and returns for art department. Sometimes it feels like the job description of a producer should simply say “everything and the kitchen sink.” But that’s usually on lower budget productions where you sort of have to wear way more hats because there isn’t budget to bring on those people to do more individual jobs.

I’m most proud of my work ethic and ability to stay grounded under pressure. I pride myself in leading with a more humanistic approach. I know that everyone walks on set with their own set of baggage and sometimes a negative history with producers mistreating, disrespecting, or exploiting them. I try to make the work environment as safe and enjoyable as I can, I know people have lives outside of their jobs, and I try to get to know people on a more personal level. Because, at the end of the day, we’re just humans making art that hopefully leaves an impact on someone or we’re lucky enough to be making a living doing something that we chose.

Do you look back particularly fondly on any memories from childhood?
I remember watching my first movie in the theater in Hong Kong, as a six-year-old – when we went back to attend my uncle’s wedding. It was called All About Ah-Long and starred Chow Yun Fat when he was super young and kind of a stud. The premise was: a father has to choose between what is best for his son and his own happiness when his ex returns after a ten-year absence. It was a family drama and portrayed a tragedy, and all four of us – my dad, mom, sister and I – walked out of the theater, hand in hand, BAWLING. I mean, really ugly crying. It’s the first memory that I have where we all felt the same thing because of a movie. 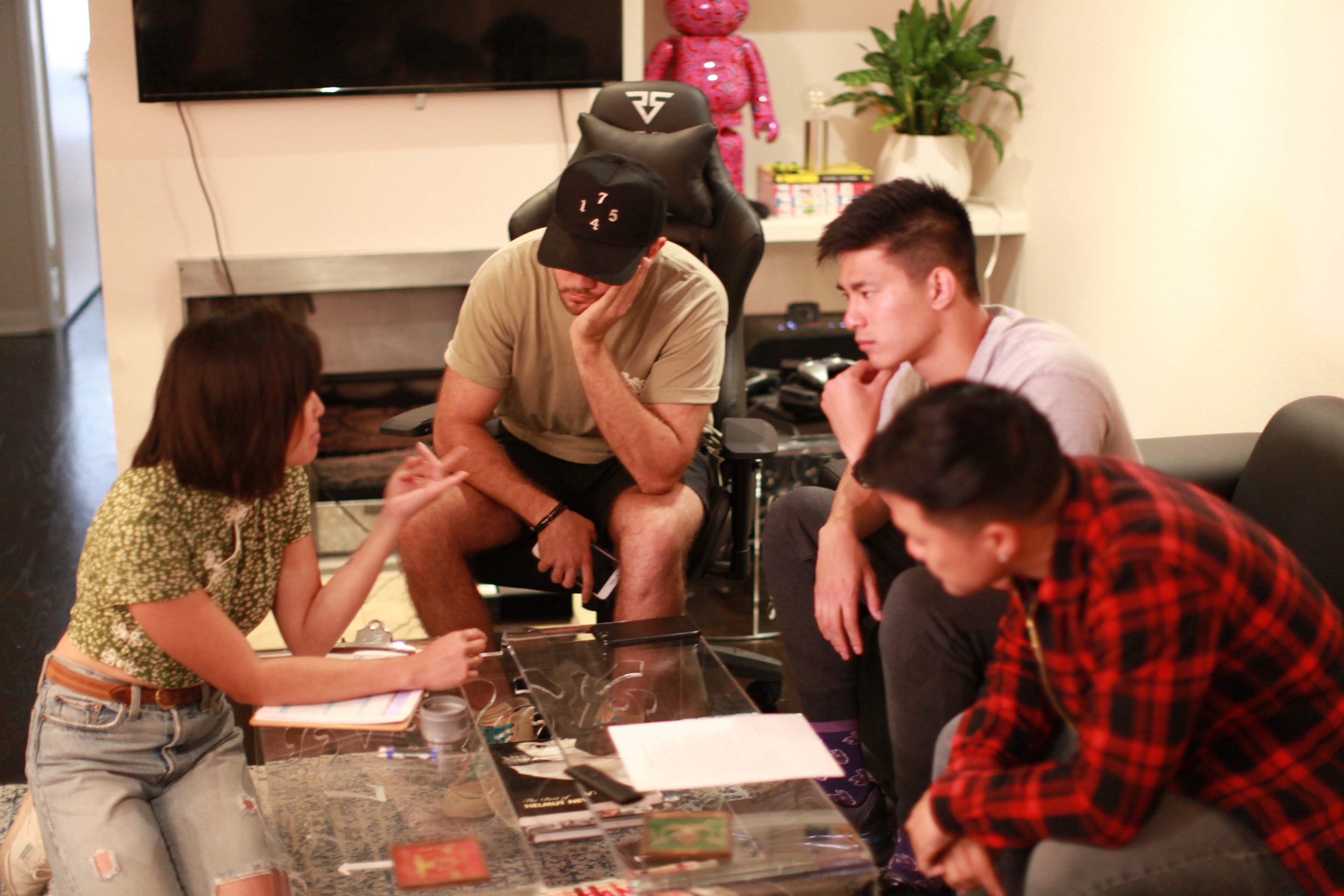 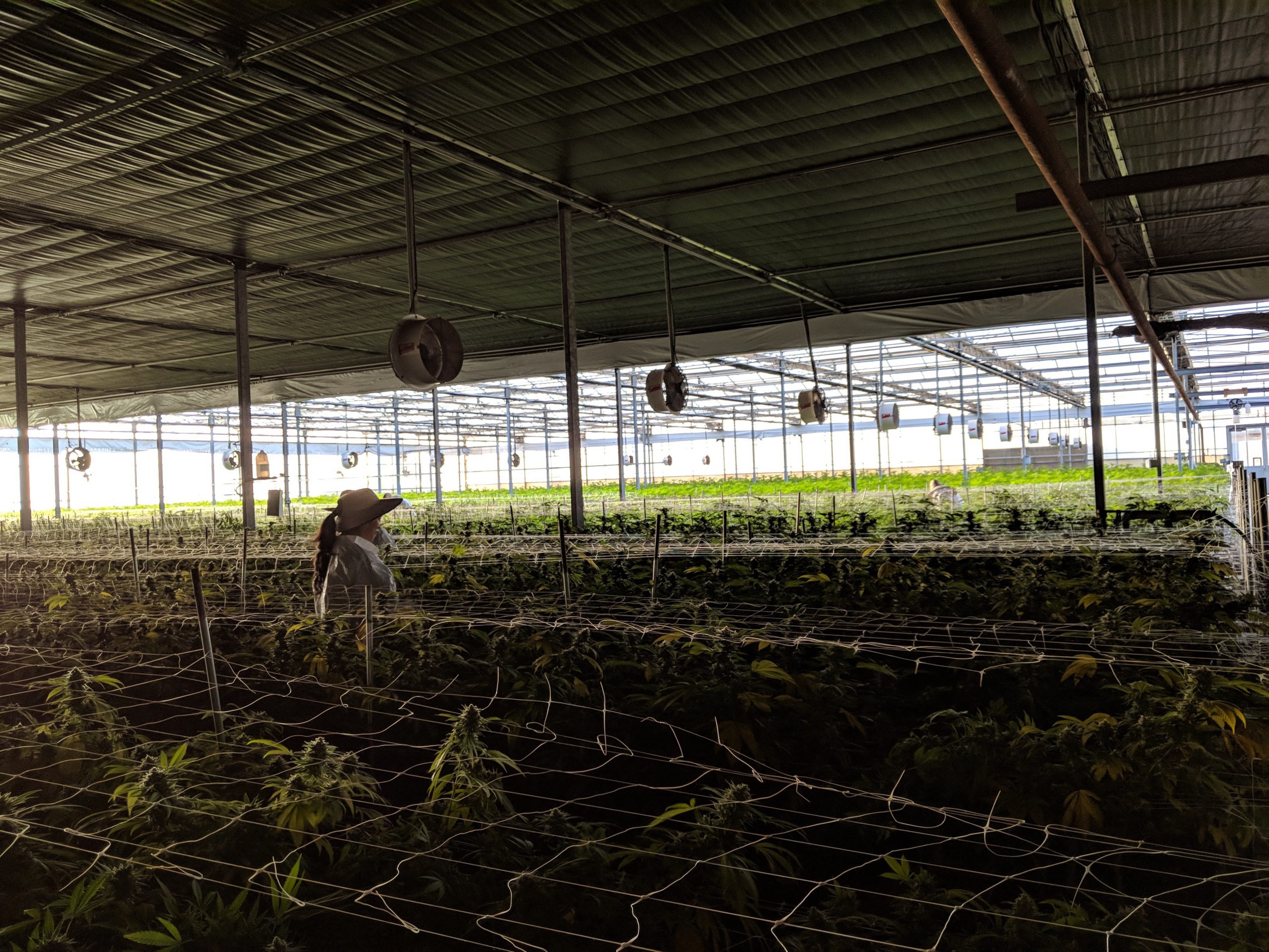 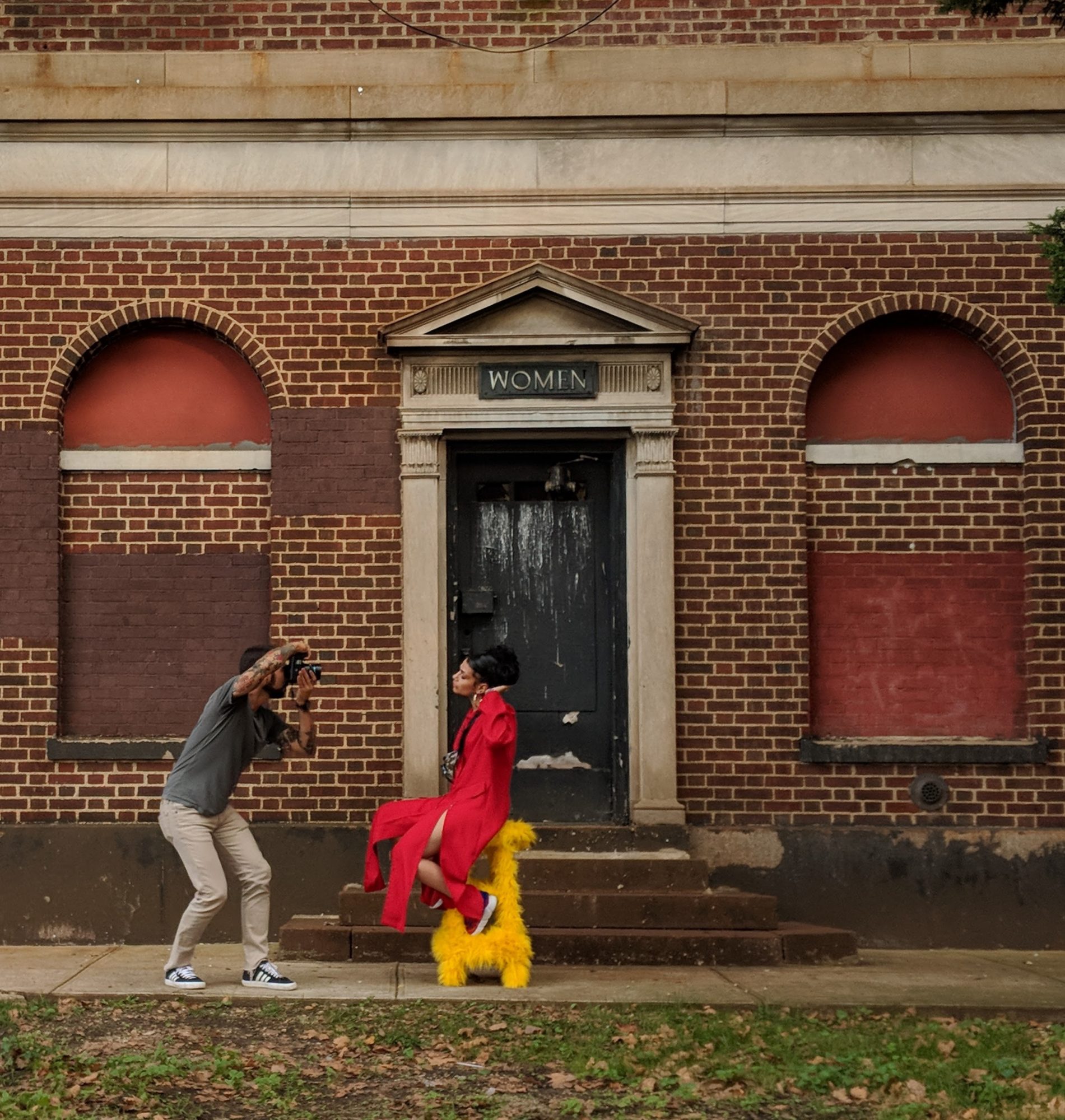 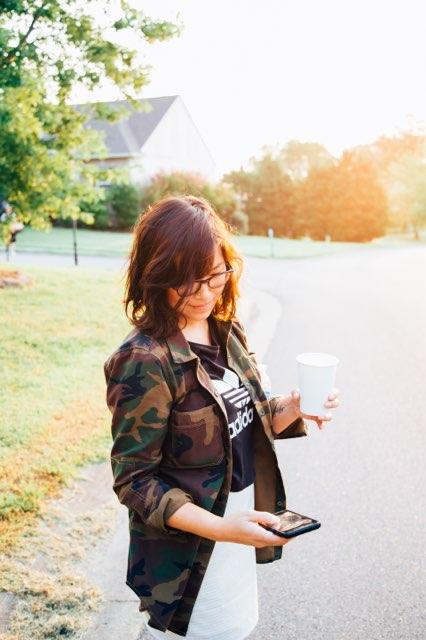 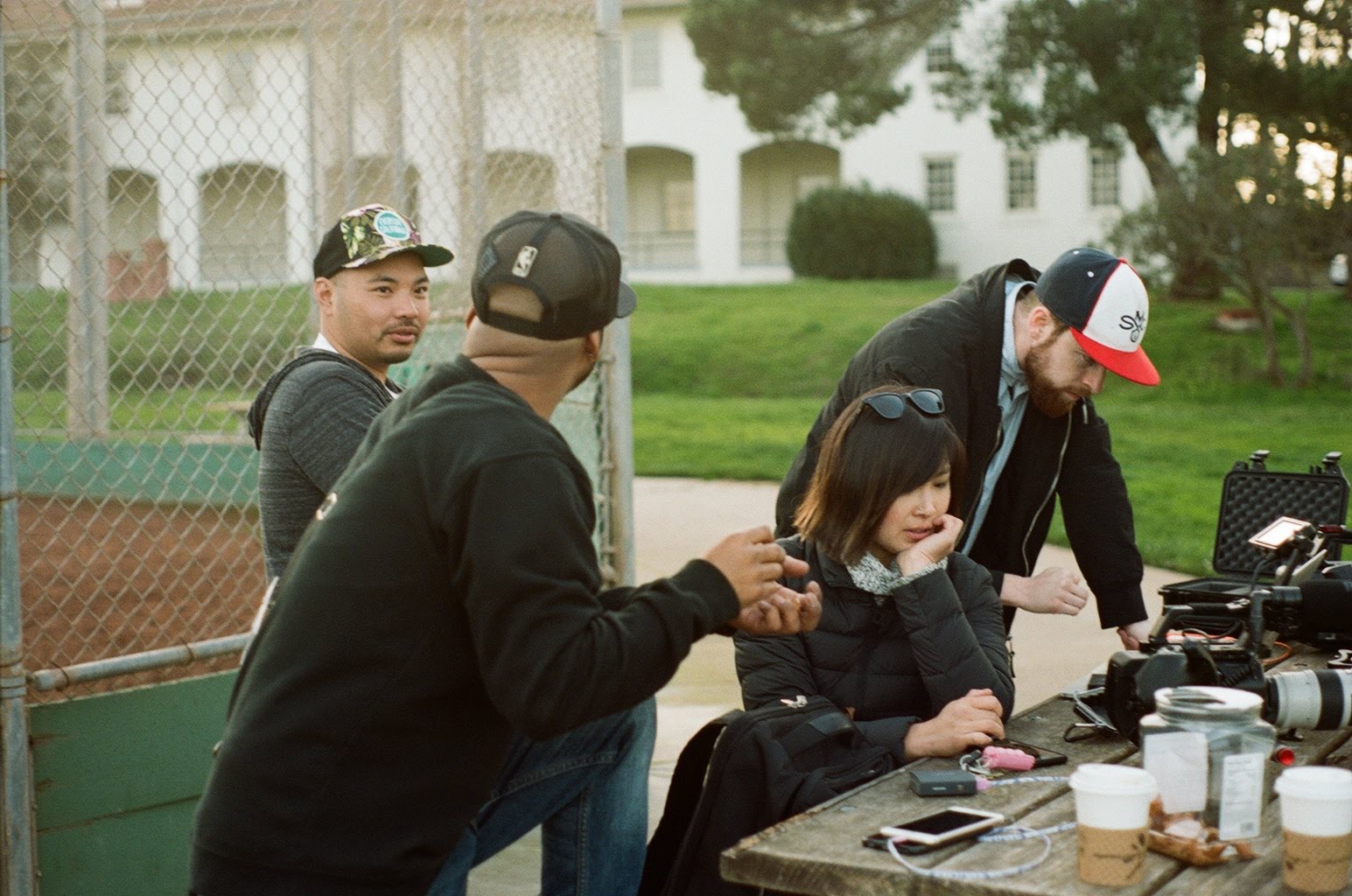 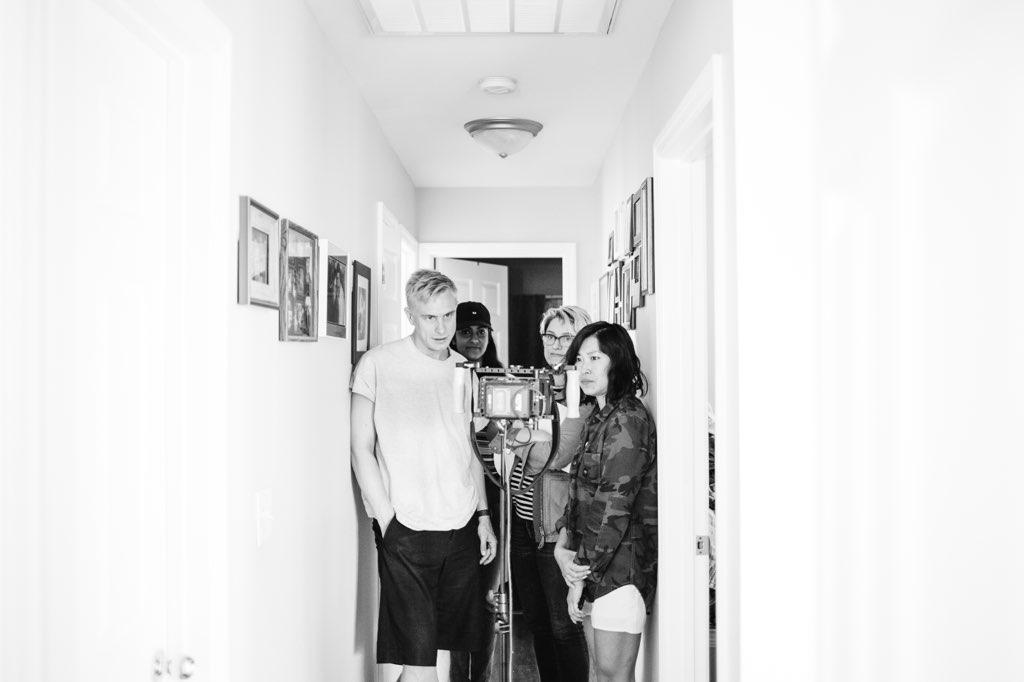 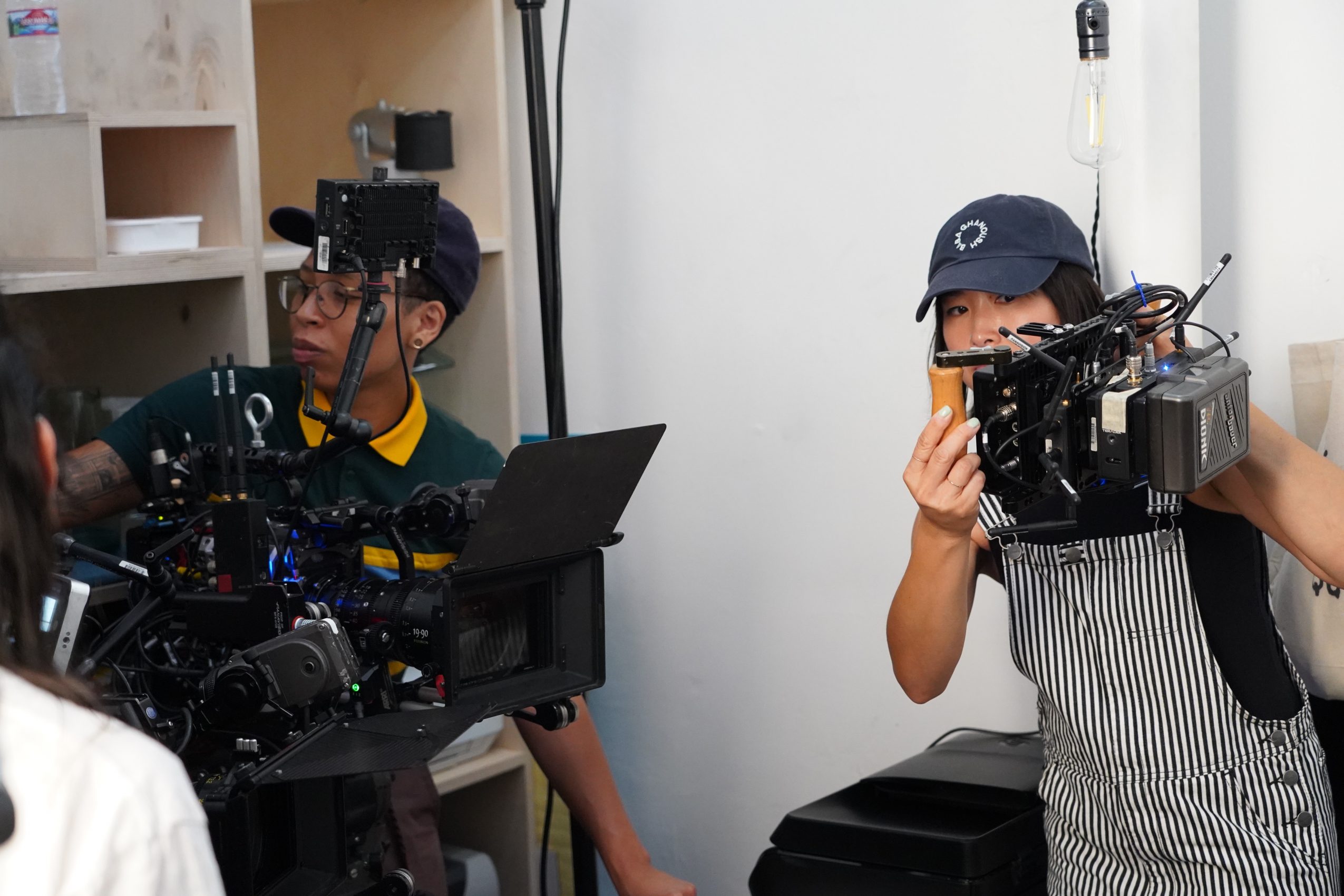